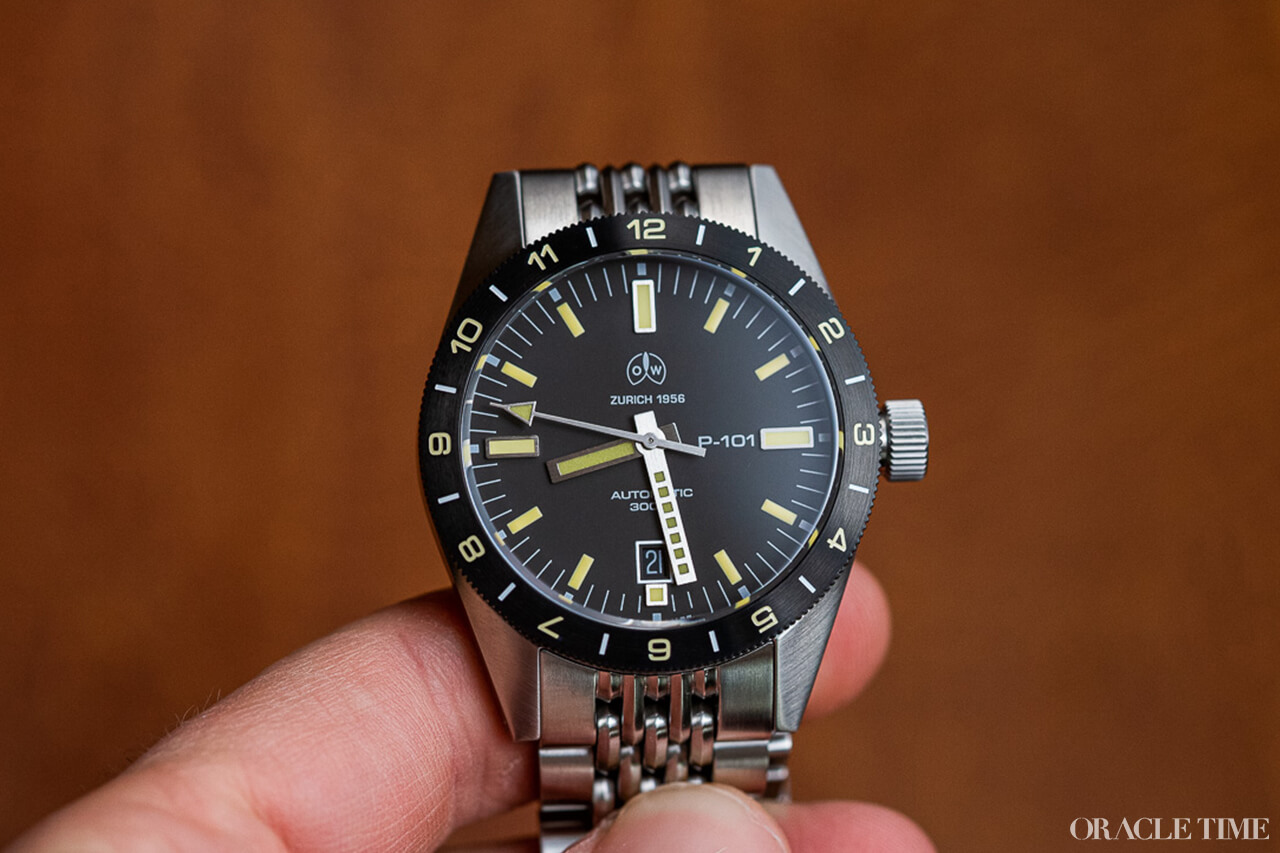 Honestly, I’d not heard of Ollech & Wajs until recently. I’m a fan of military watches in general, but they tend to be more of a European bent with a few oversized Soviet numbers. OW on the other hand originally made their name Stateside, building watches adopted by the American forces shipping out to Vietnam.

They also built the first 1,000m water resistance watch – the 1964 Caribbean – and continued the Navitimer for 20 years after Breitling went under in 1978, under the brand name Aviation. If you’ve not heard of Ollech & Wajs before, now’s the time to get acquainted – especially as their recent relaunch has gone pretty damn well. 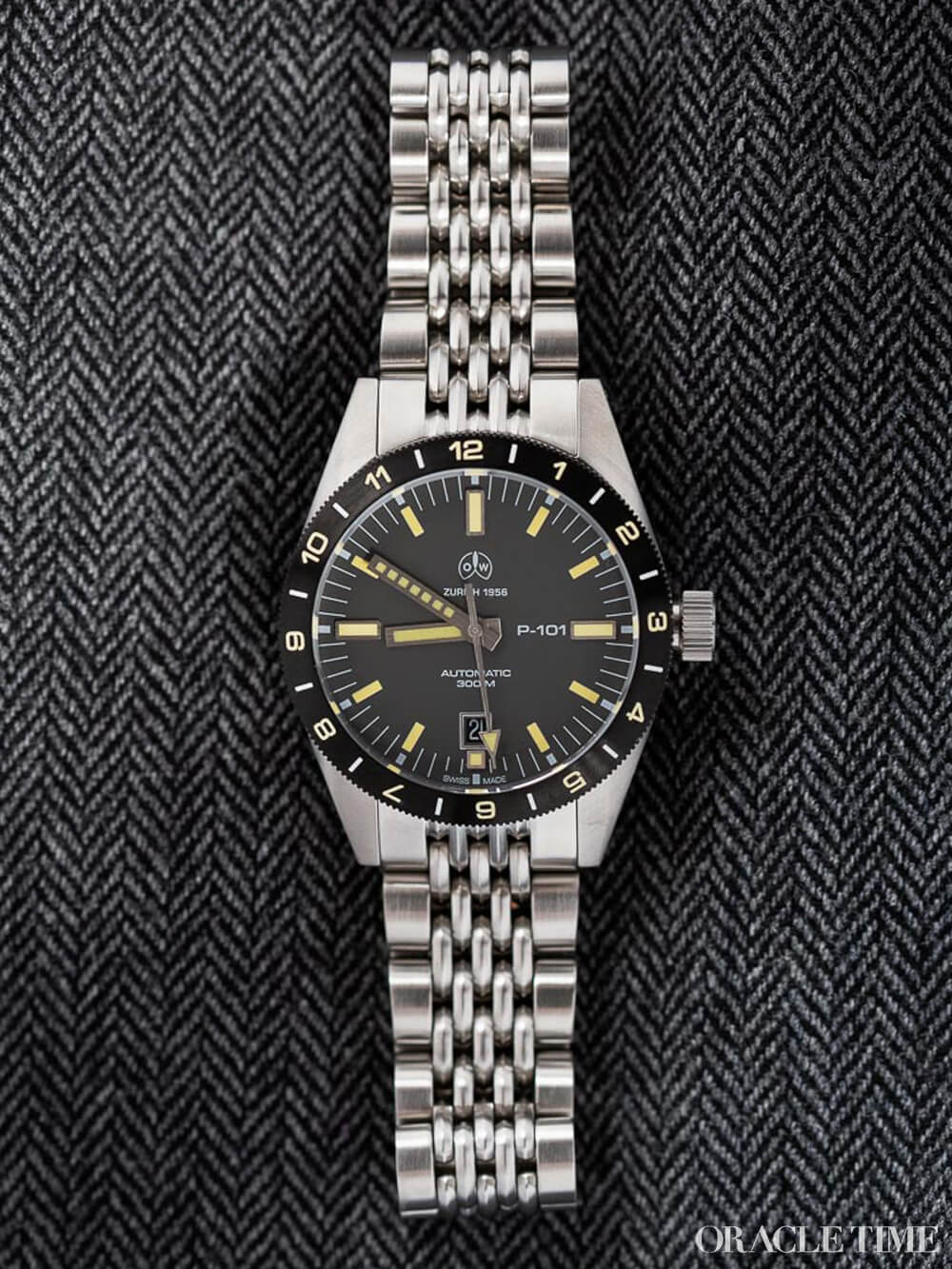 The OW P-101 is one of the modern brand’s two re-launch watches, the other being the slightly more technical OW P-104, and is a stripped back, military-style pilots watch. Rather than drawing from O&W’s own heritage however the inspiration for this particular timepiece is the supersonic McDonell F-101 fighter jet.

The F-101 broke the 1,000 mph speed record way back in 1956 – as a little bit of trivia, the record’s now held by NASA’s X-43A which can hit nearly 7,000 mph – and is still an iconic piece of aviation history. Thankfully the P-101 doesn’t lean on it too heavily; it’s not like it includes a piece of the jet somewhere in its construction.

In fact, if you didn’t notice the nod in the reference, you might be forgiven for never guessing the inspiration behind the watch, aircraft historian or no. Overall, the P-101 S is a stripped-back, utilitarian piece so there aren’t excessive flourishes and details to tie-in. 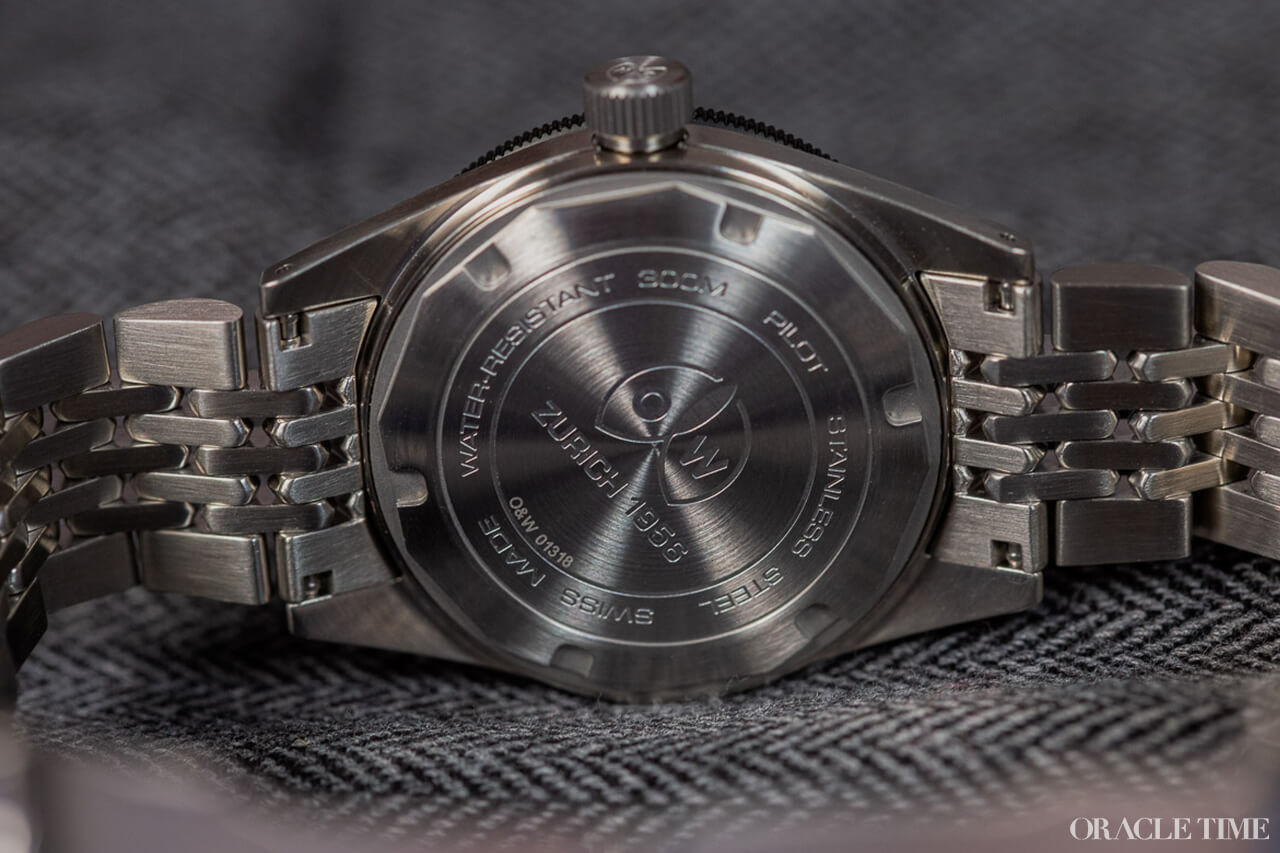 That’s no bad thing at all; I personally can’t stand details that only exist as a novel nod to whatever’s behind the watch’s design. They detract from what the watch should be, namely a solid, legible and reliable timekeeper. With its classic three hand dial with large, green-lumed indexes – backed up by an ETA 2824-2 – the P-101 S is all those things.

That said, there are a couple of quirky details. The ladder minute hand is a nice little touch and one you don’t see often. It’s as functional as any hand, just a bit more fun. Then there’s the bi-directional, 12-hour bezel that acts as a second time zone without the need for an actual complication, complete with a coinedge bezel to ensure easy operation in flight gloves. 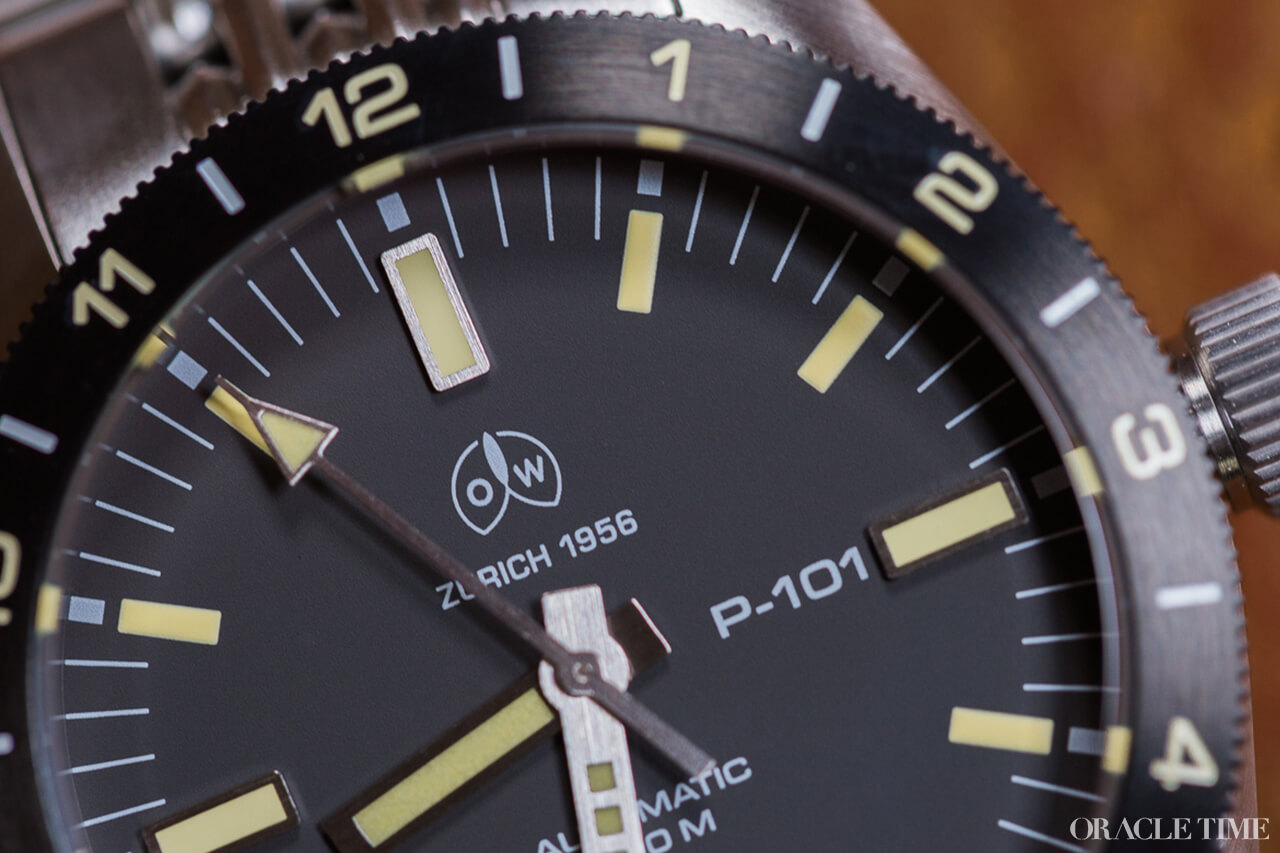 At 39.5mm across the P-101 S shouldn’t feel like a big watch and in looks it really isn’t. It’s even pretty slim – 12.5mm to be precise. But it feels like a much larger watch on the wrist, if only because of the oddly long lugs. While they look great, I’m not sure I appreciate just how much wider they make the dimensions. Not unwearable, but definitely not ideal.

It’s pretty weighty too, but that I don’t mind, particularly when it comes with 300m water resistance. I always want that kind of spec to be backed up by a reassuring weight. While the P-101 doesn’t have all the necessities of a diving watch (mainly the wrong bezel) you can still take it down without fuss. 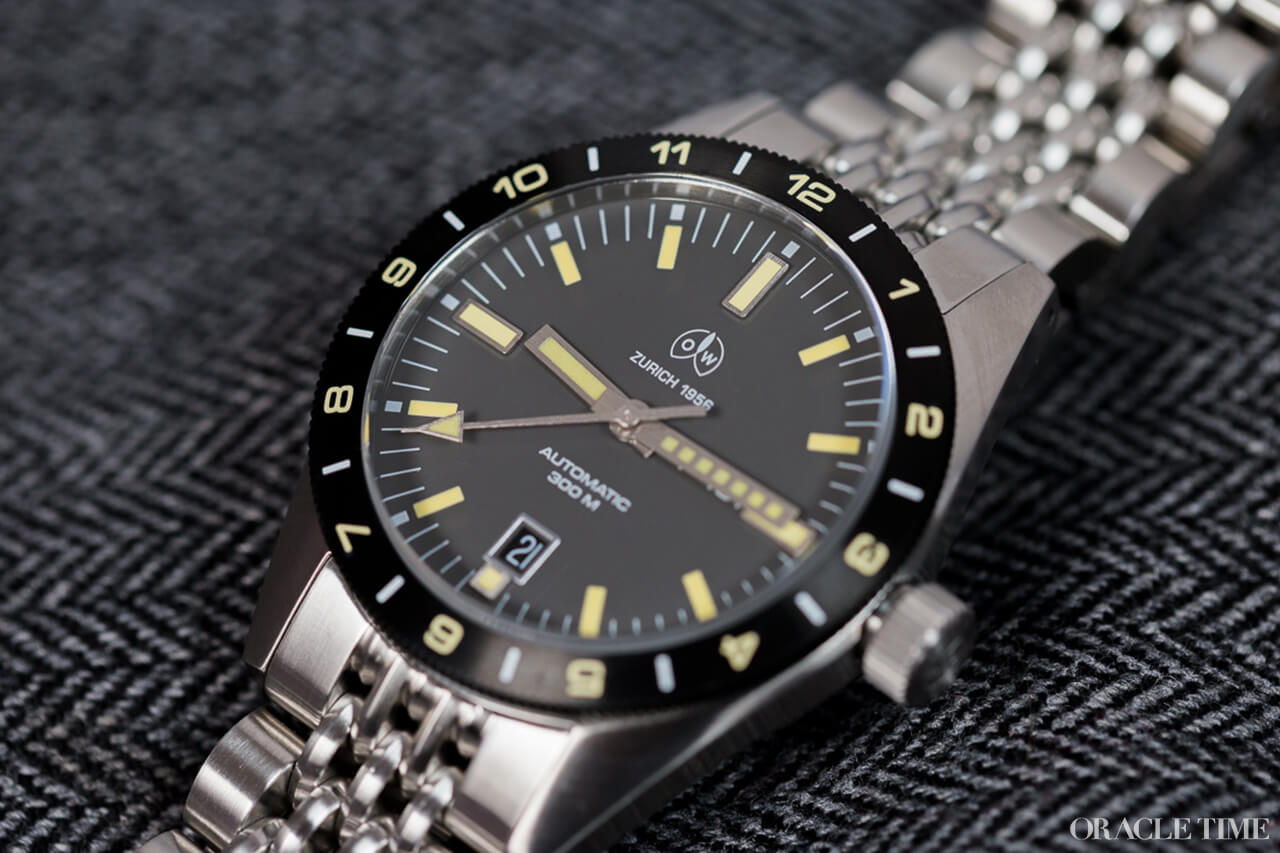 In fact, with all its specs taken into account – and its distinctive tool watch vibes – the P-101 S might just be a near perfect everyday wearer. It’s rugged, sleek and handsome, all backed by a solid movement and more than enough water resistance. Even if it were a bit more expensive, it’d be a great option.

As it is, just under £900 for this thing makes it a serious value proposition. I’m just glad I know who O&W are now, at least.