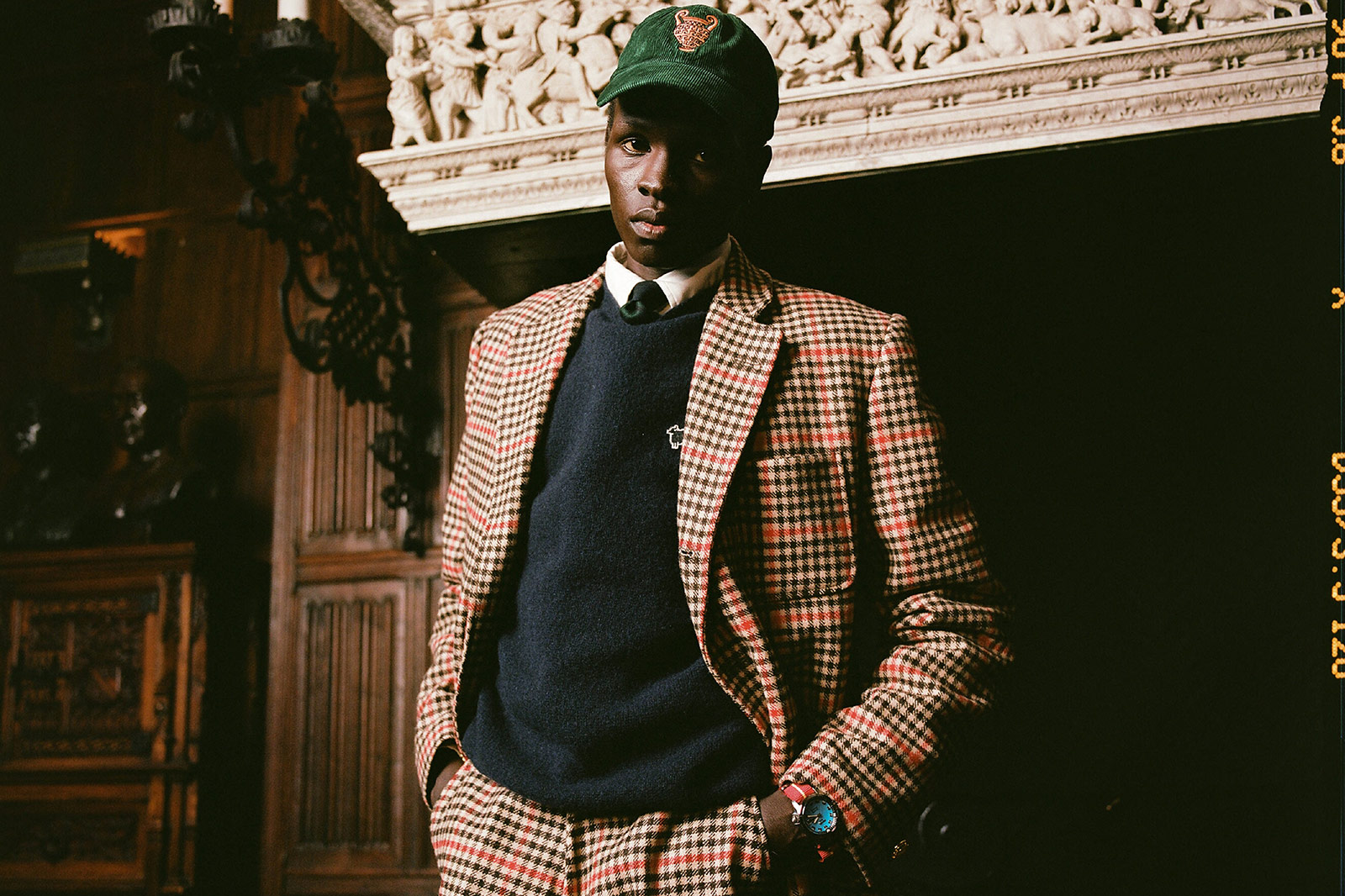 It’s hard to imagine two style subcultures more fundamentally opposed than streetwear and prep. One has its roots in the anti-establishment skate and surf scene of the American West Coast, while the other can be traced back to the wood-panelled halls of the north east’s elite universities.

The disparity between skaters and preppy kids is something anyone who attended high school or college in the past 40 years will be familiar with. It was tribal. A prevailing us-vs-them mentality in both corners inspired its fair share of teen-movie subplots over the years and (for better or worse) perhaps an even greater number of Avril Lavigne songs. The idea of incorporating elements of the other’s wardrobe couldn’t have been further from either side’s mind. Penny loafers and pleated pants with hoodies and beanies? Perish the thought! But that’s exactly what’s been happening in menswear of late. 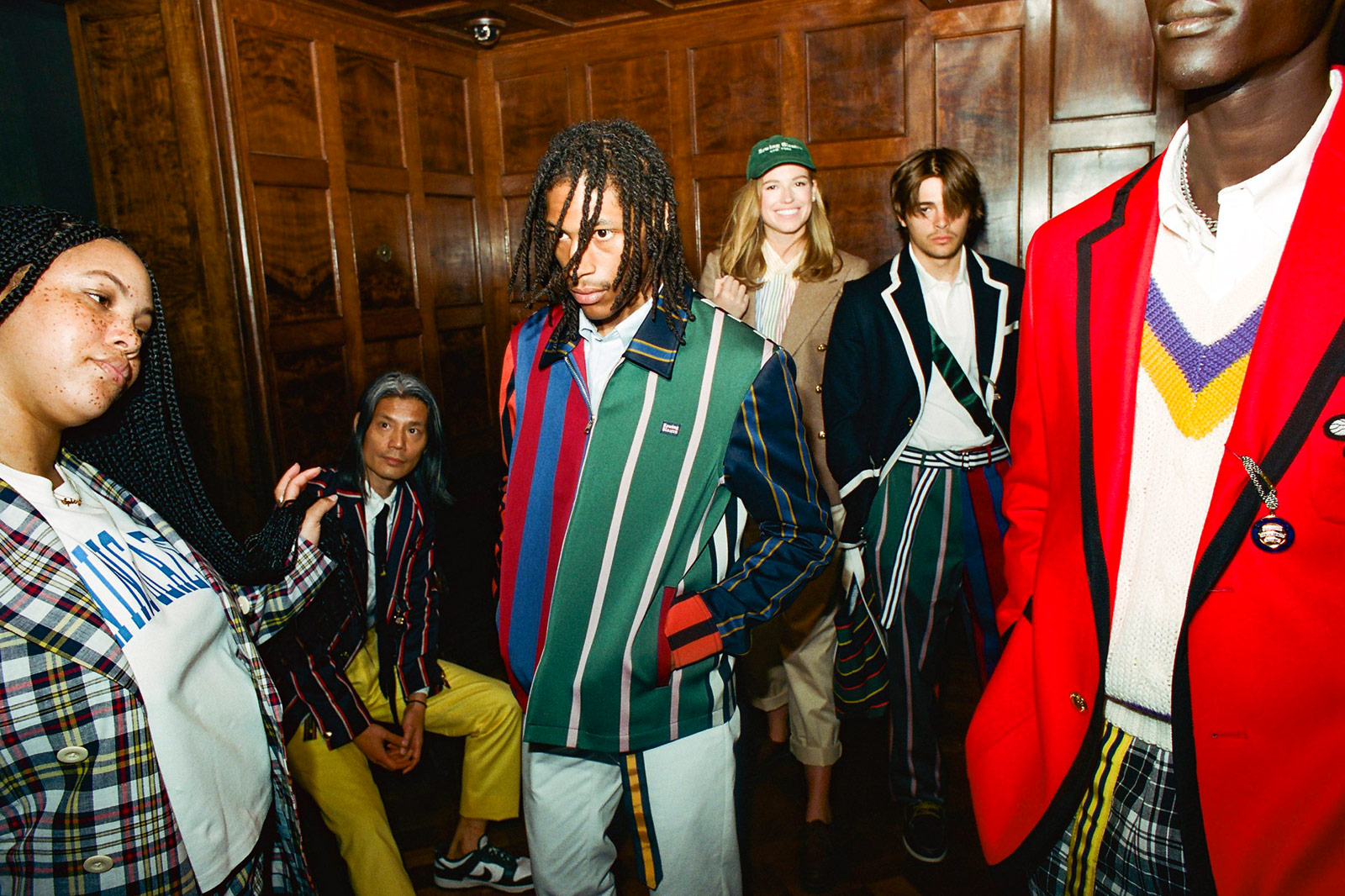 Streetwear used to be an easy concept to pin down. It was a Supreme box logo, a Stüssy graphic tee, or a queue of teenagers snaking its way around your local sneaker shop’s block. During the mid 2010s, it became the focus of high-fashion’s attention. Suddenly, historic haute-couture houses were hiring streetwear creative directors, pro skaters were walking Paris Fashion Week runways, and hoodies, graphic tees, and sneakers all became the new luxury items.

In recent seasons, luxury brands have moved away from puffers and big logos. But streetwear isn’t dead, it’s simply evolving. As the hypebeast generation grows up and starts to look beyond sneakers and hoodies for its sartorial fix, a relatively new crop of brands have tapped into the current mood by fusing streetwear with elements of workwear, sportswear and, perhaps most notably of all, preppy and Ivy League style. 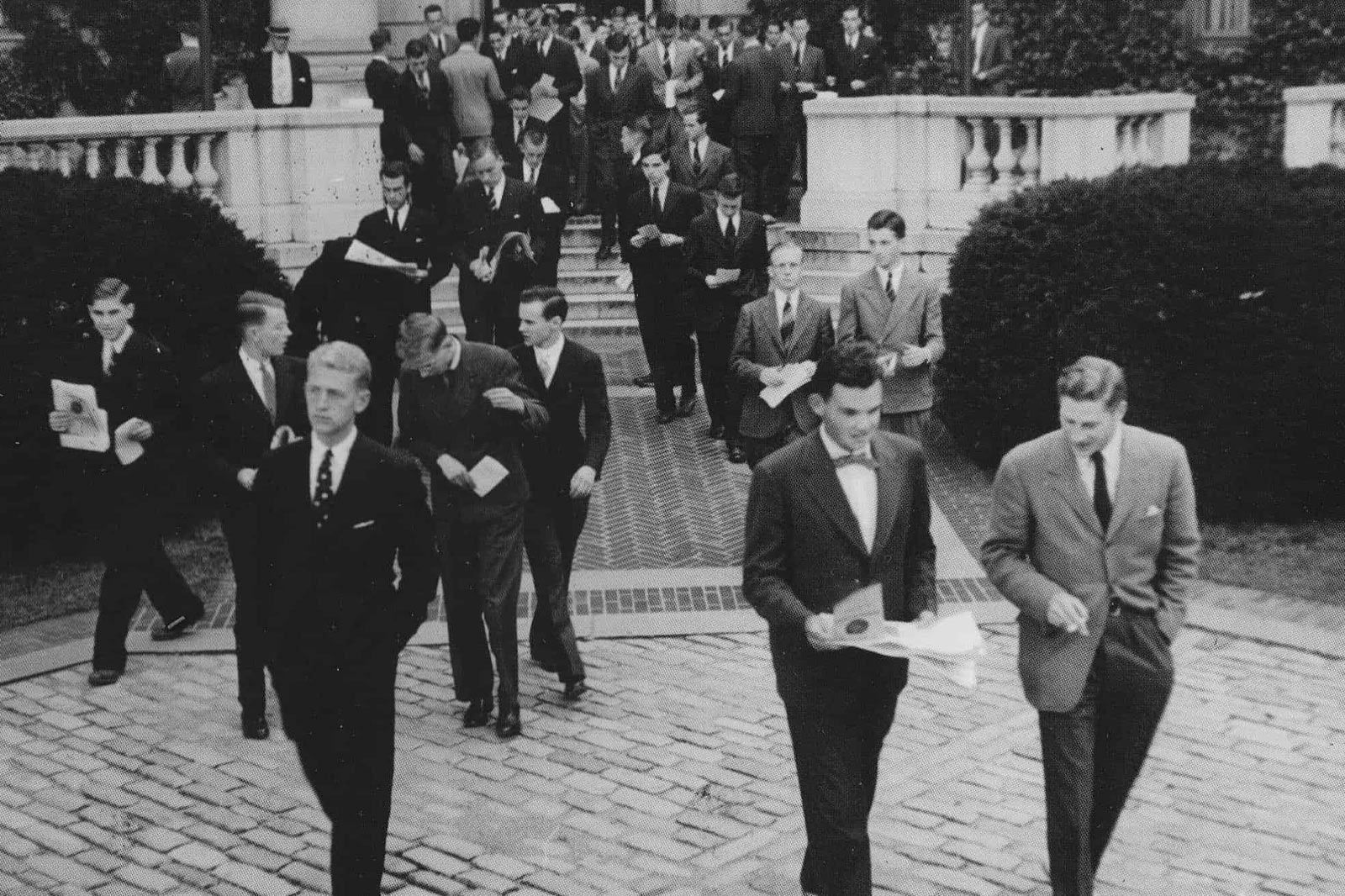 This casually sophisticated menswear subgenre originated on the campuses of the USA’s prestigious Ivy League schools in the 1950s. It incorporated garments associated with traditionally upper-class sports such as golf, rugby, polo, sailing, hunting, and tennis. There was also casual tailoring and elements of British and American country attire. The original style shares its name with the group of universities that gave birth to it, but ‘preppy’ is the umbrella term more commonly used to describe the overall aesthetic today. 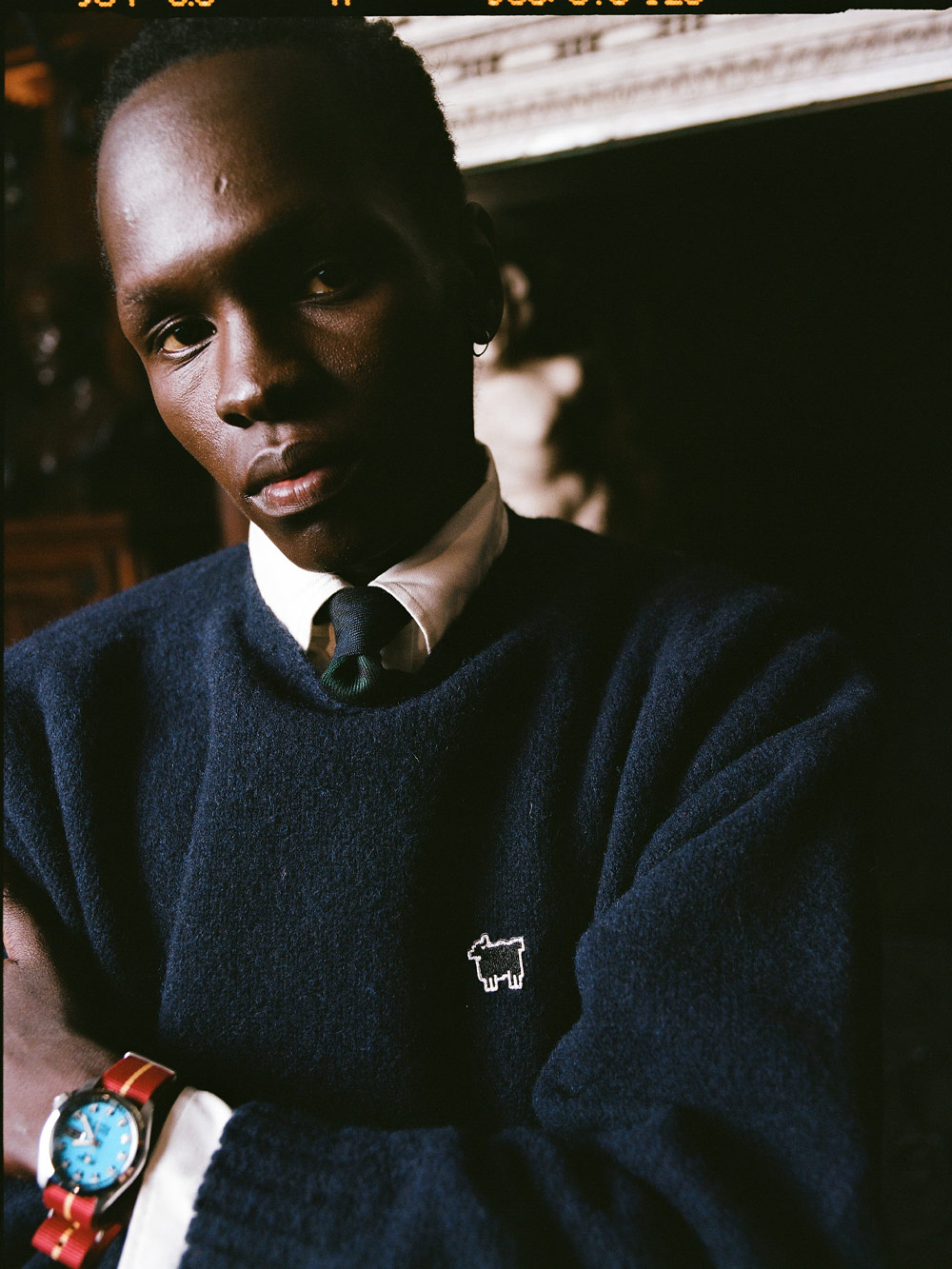 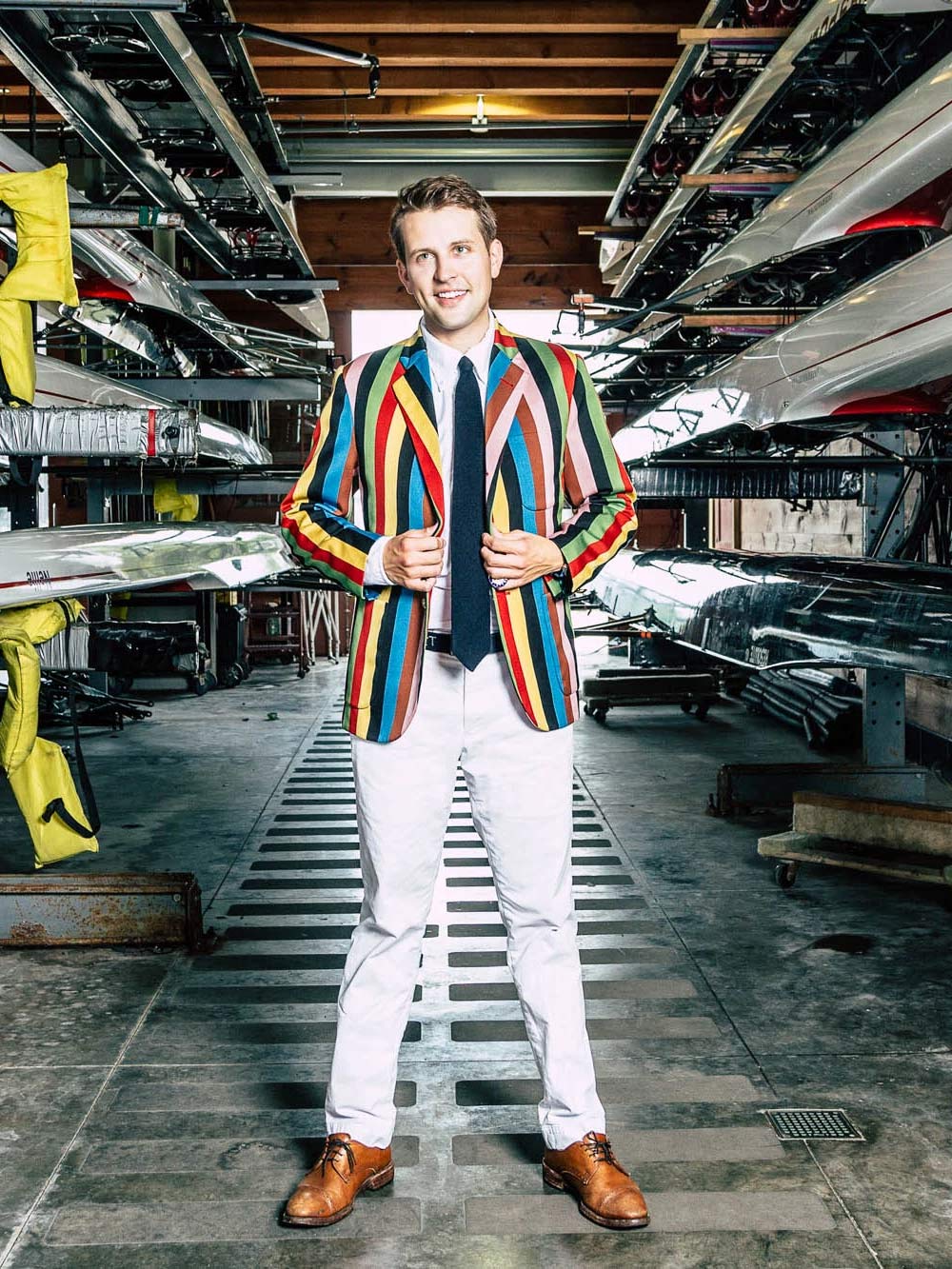 Jack Carlson is better positioned than most to speak on the subject. An Oxford- educated, US national-team rowing coxswain, born and raised in New England, he fits the preppy profile perfectly. But Carlson’s personal style has always been eclectic. Rather than sticking religiously to navy blazers and polo shirts, he incorporates elements of vintage, Ivy, and streetwear, with plenty of colour and character to boot. It’s a visual language that he’s carried over to his own brand, Rowing Blazers.

“I think ‘preppy’ can be a little bit of a dirty word,” Carlson says. “It’s got a lot of baggage. For some people, they hear it and they think of Vineyard Vines or, you know, a picture of a bunch of white people on a boat dressed like they’re going golfing. What we’re doing with Rowing Blazers is redefining the word ‘preppy’. We want to change what people think about when they hear it.” 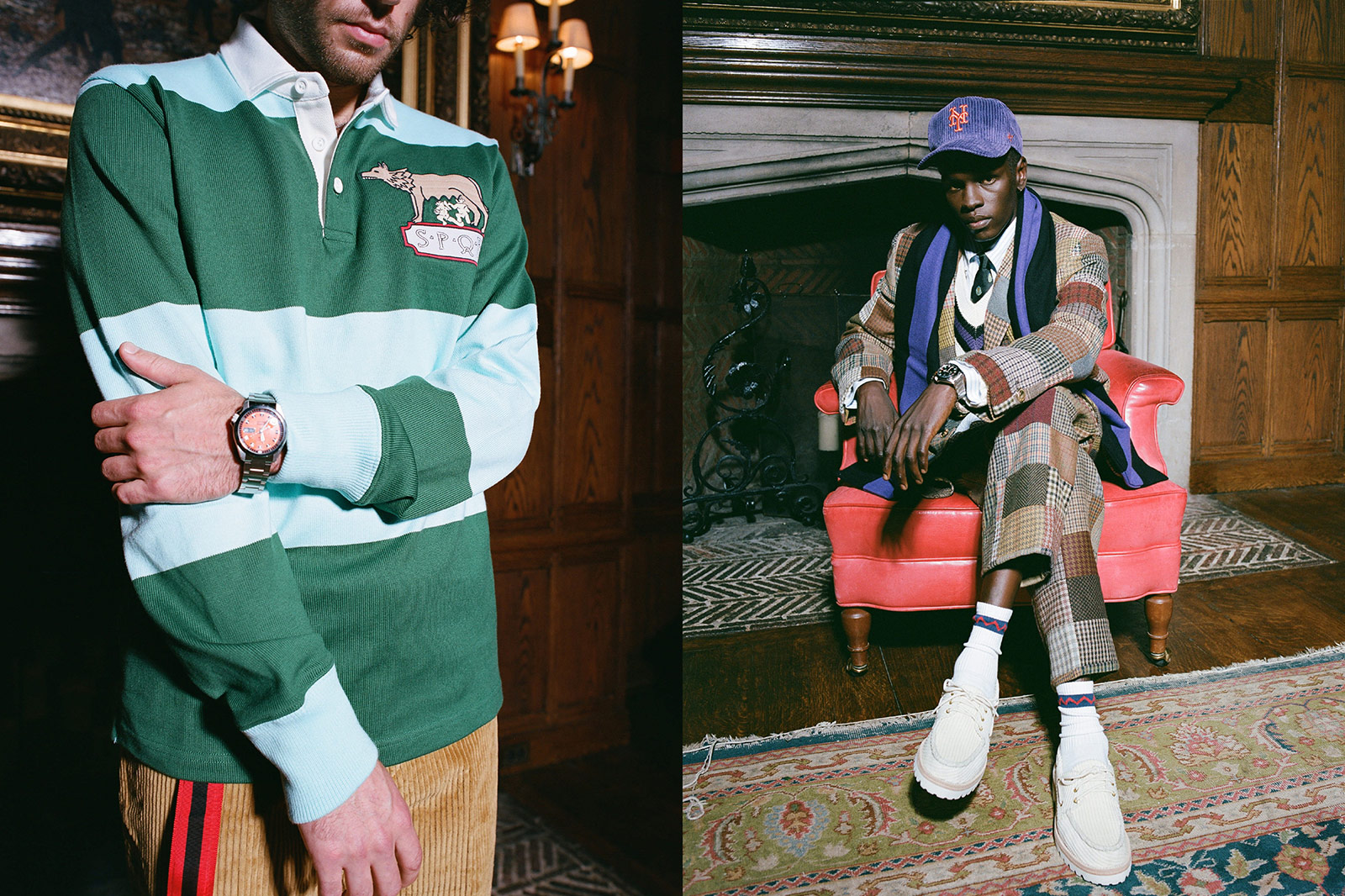 Founded in 2017, Rowing Blazers serves up collegiate classics with a playful streetwear twist. Colourful pop-culture imagery dances across a range of preppy silhouettes, like rugby shirts, blazers, and polos. And limited collabs (such as the recent collection of co-branded Seiko 5 Sports watches) routinely sell out in minutes. “When I was first starting the brand back in 2017, I had friends of mine in the industry telling me not to do it. This was like the height of streetwear infiltrating mainstream fashion. So for them, doing something preppy was all the way at the opposite end of the spectrum.” 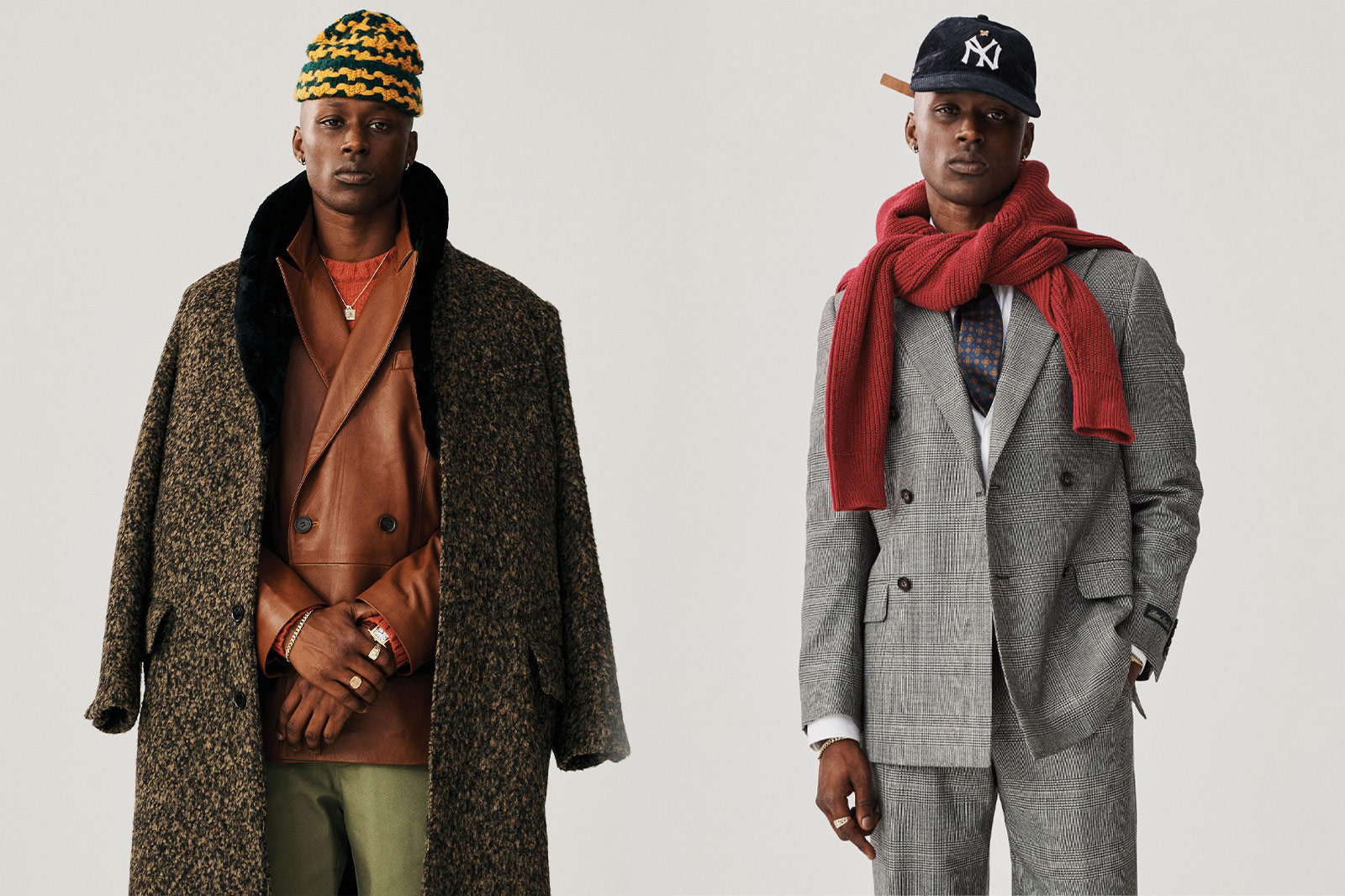 Aimé Leon Dore is another crossover brand enjoying unprecedented levels of success. The New York label has enjoyed a meteoric rise since its launch in 2014, blending streetwear, workwear, tailoring, and prep in its own unique way. Flicking through lookbook photographs you’ll see hoodies styled alongside loafers, beanies paired with double-breasted leather blazers, and sweatpants worn with Clarks Wallabees. There’s an unmistakable streetwear flavour, but it’s delivered in a way that feels elevated and mature. 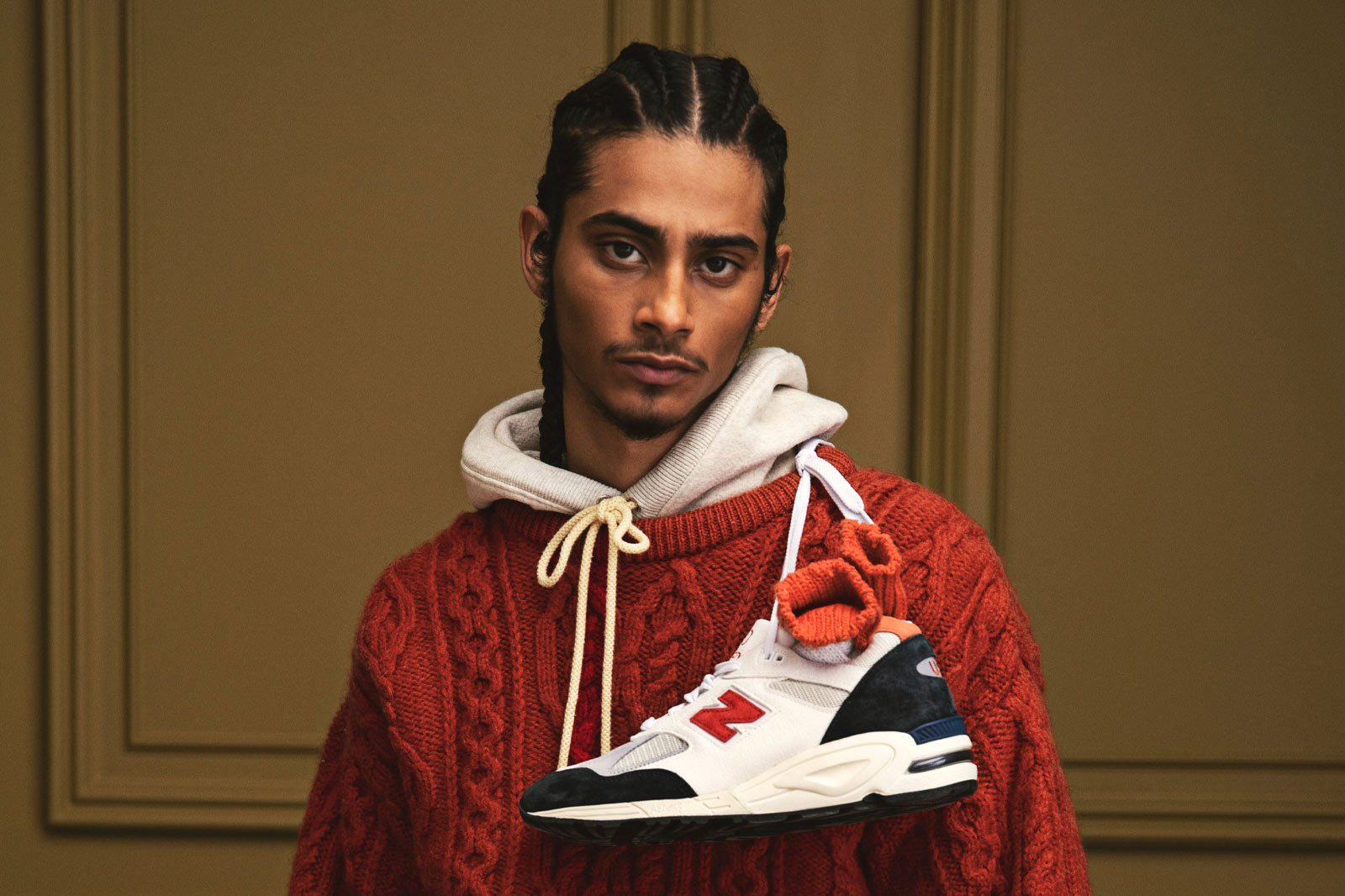 The tastemaking label’s influence on men’s fashion hasn’t gone unnoticed by the industry’s heavy hitters. Earlier this year, French luxury giant LVMH took a minority stake in Aimé Leon Dore for an undisclosed sum. Around the same time, the brand’s founder, Teddy Santis, was recruited by New Balance as the creative director for the Bostonian footwear brand’s iconic ‘Made in USA’ line. His first collection sold out straight away. 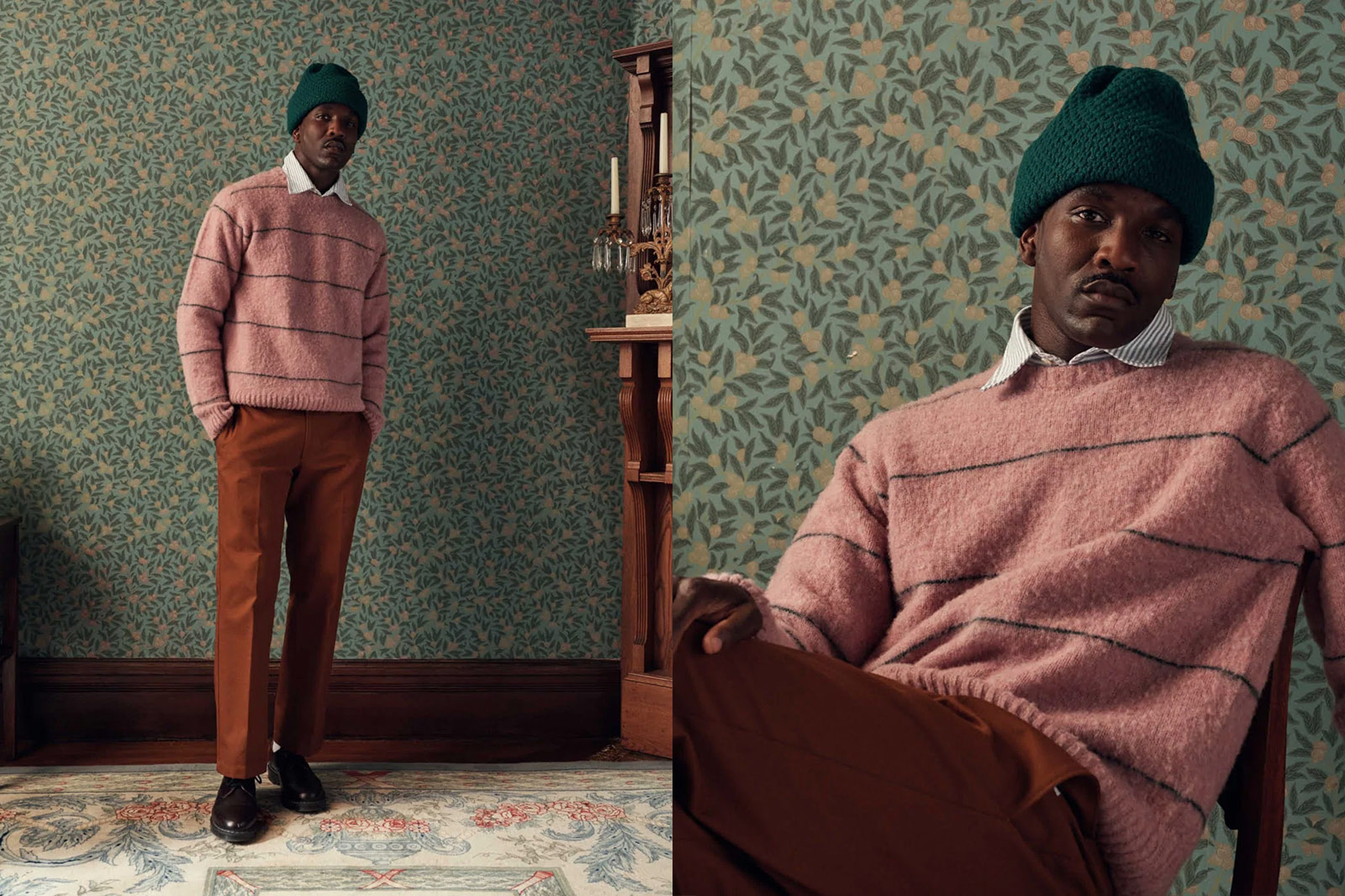 Then there’s Noah NYC. Founded by former Supreme creative director Brendon Babenzien, it’s a brand with pedigree streetwear and skate-culture DNA that mixes in influences from punk, classic menswear, surf culture and a heavy dose of Ivy League style. Noah’s knack for reimagining preppy pieces in a culturally relevant way is so good, in fact, that struggling purveyor of high-street prep J.Crew this year hired Babenzien in an attempt to revamp the brand.

Some might argue that this latest wave of preppiness is nothing particularly different to what Ralph Lauren and its various sub-brands have been doing for decades. Polo Ralph Lauren was selling hoodies alongside blazers long before Teddy Santis was old enough to even spell the word ‘fashion’. So what’s different this time around? 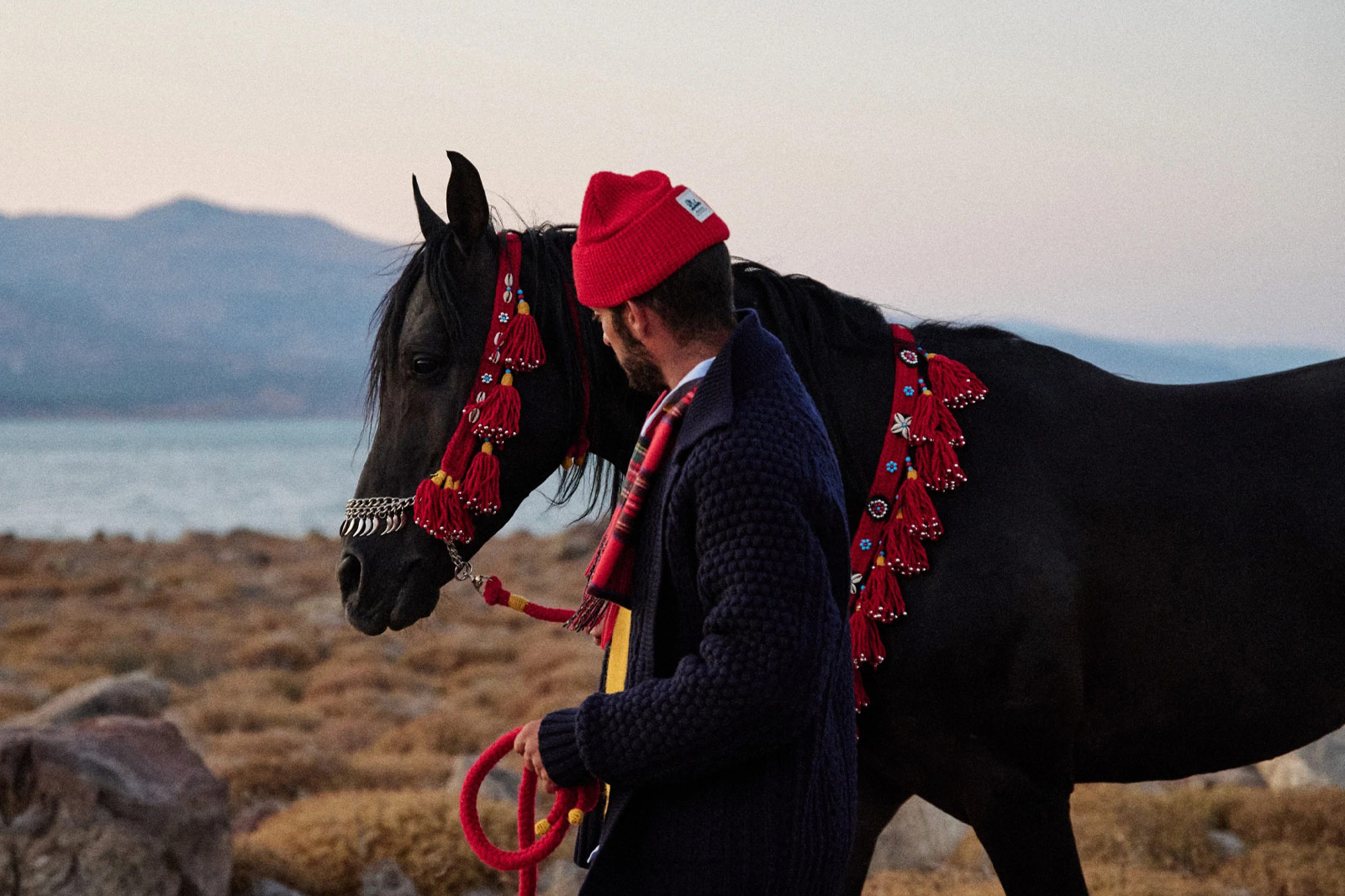 “I think it comes down to trend and branding rather than product,” says Esquire UK style director, Charlie Teasdale. “For whatever reason, Aimé Leon Dore, for example, managed to hit upon a combination of sportswear, classic menswear, Americana and nineties- nostalgia that hit the zeitgeist perfectly.  And even though the brand operates in much the same space as Polo Ralph Lauren, it has created a distinct tone of voice that appeals in a completely different way.”

It certainly feels like we’re watching streetwear grow up and, by extension, smarten up. Renewed interest in tailoring and dwindling sneaker sales point to a fundamental change in direction. But is this indicative of menswear going back to a smarter way of dressing across the board? 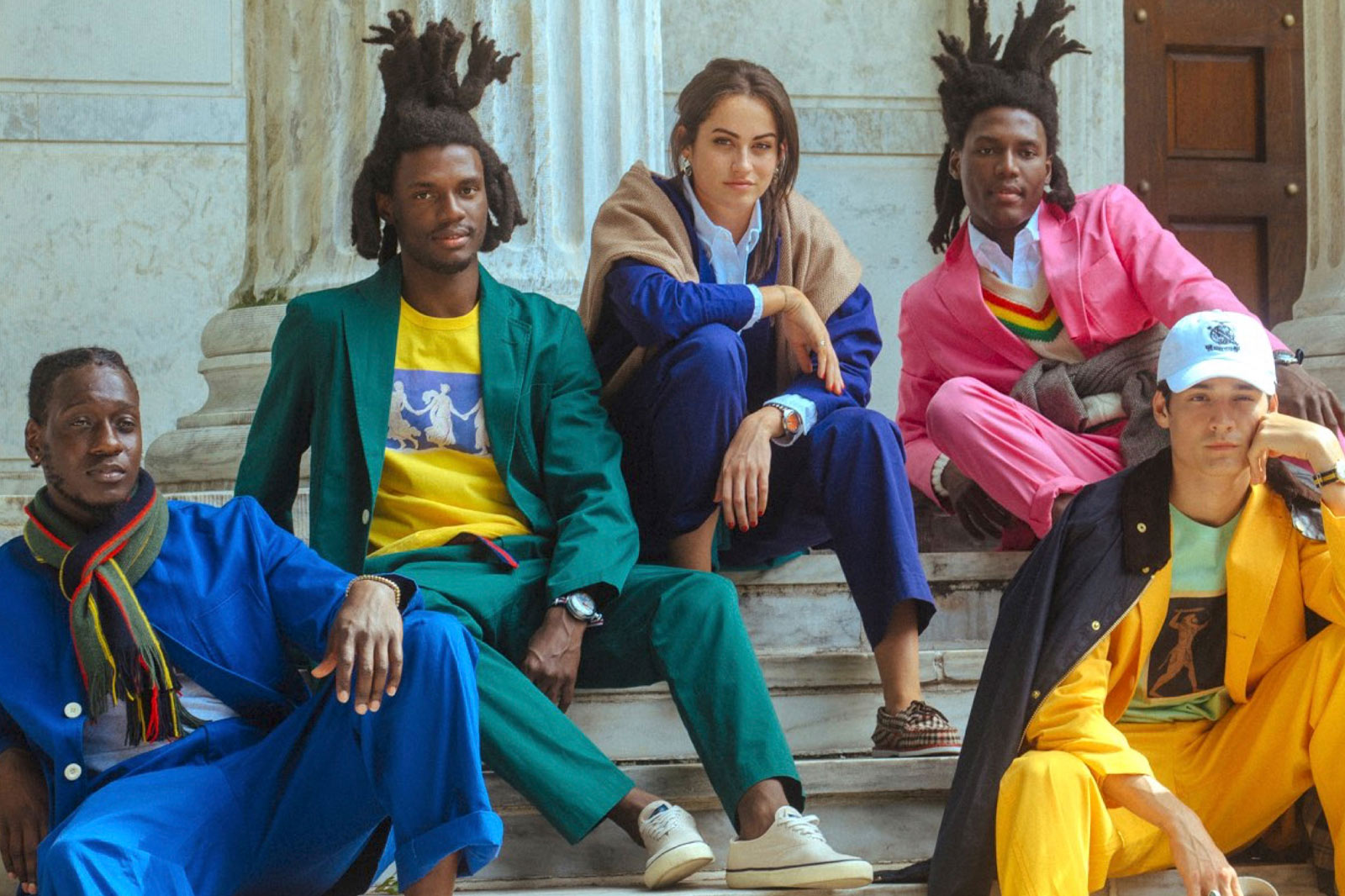 “If anything it might be an inversion,” explains Teasdale. “Things that were once deemed smart – loafers, cardigans, chinos, even ties – are now considered much more casual. It’s good and bad news for purveyors of ‘formal’ menswear because it means their wares are popular, but not being worn in the traditional way, or with the requisite reverence. Suits are still cool, but I don’t think an expensive suit is necessarily a marker of taste anymore.”

Preppy style and tailoring are both notoriously elitist. In many ways, streetwear’s adaptation of these smarter elements could be seen as a sartorial democratisation of sorts. Well, provided you don’t look at the price tags, that is. Because let’s face it, charging £95 for a t-shirt is hardly tearing down the barriers of social class, is it?

Paddy Maddison is a freelance menswear journalist with a keen interest in outerwear. When he’s not plotting his next big-coat purchase for the coming winter, he can be found at his desk, typing up words for the likes of The Independent, Esquire, GQ, and Men’s Health. He’s also Style Editor at Ape to Gentleman and a former Contributing Editor at FashionBeans.