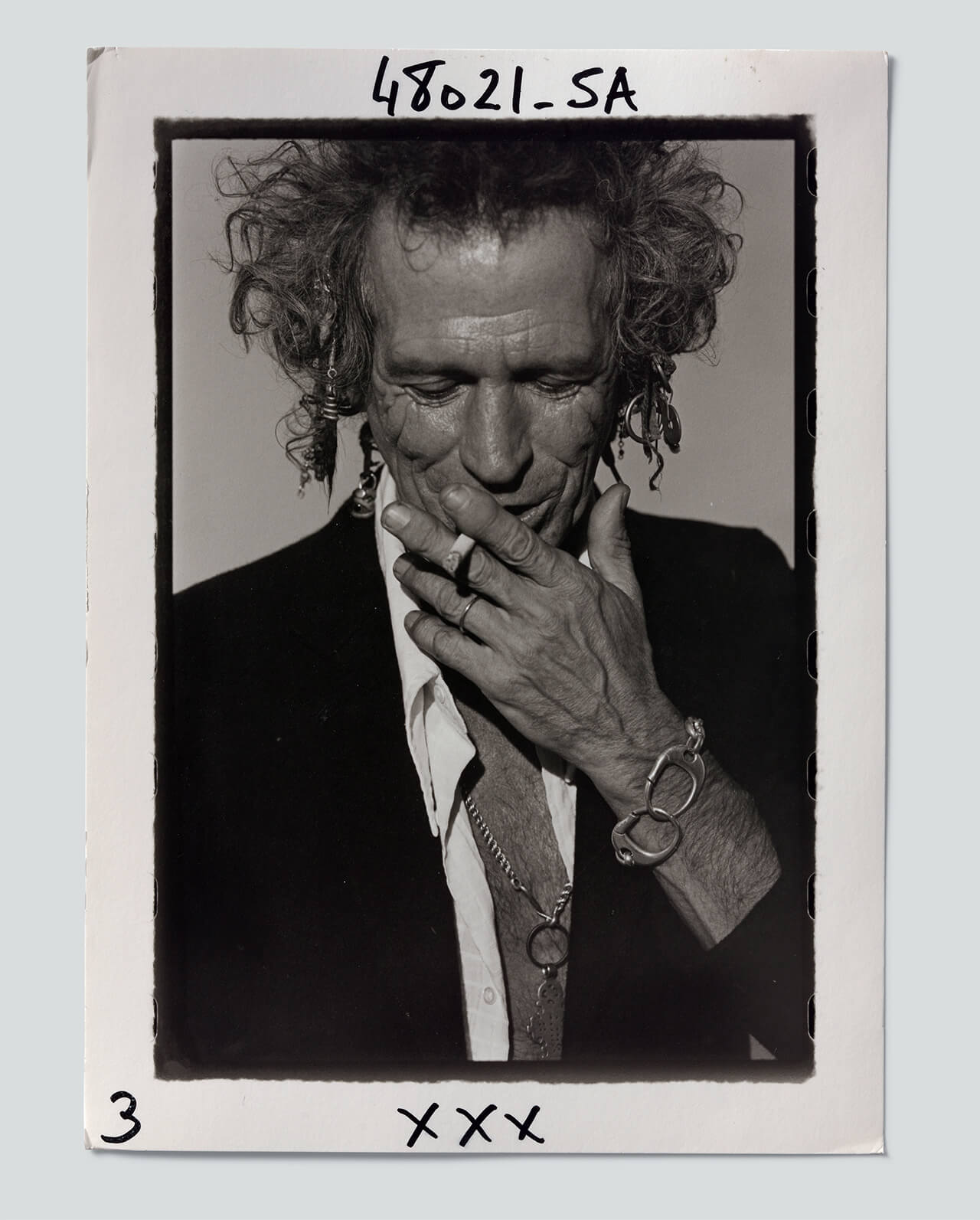 In 1999, Kieth Richards took part in a photoshoot that has become part of pop culture legend. Shot on a Manhattan rooftop by Peter Lindbergh, the Rolling Stones frontman is captured in black and white against a backdrop of water towers and exposed brick walls. There’s a light stroke of eyeliner on his eyes, and he’s dressed in a floor-skimming, Tom Ford-era Gucci coat, his shirt unbuttoned to his waist exposing an intricate gold cross nestled in his chest fur. So far, so rock star. However, one of the standout aspects of the styling of this shoot – and what has made it iconic – is that jewellery adorns his wild hair: gold hoops, beads and pendants cluster around his ears.

“When I turned up to the shoot, Keith said to me that he’d been asleep on the sofa and when he woke up, he had a charm caught in his hair,” says Jo Hambro (formerly Levin), who styled the shoot for British GQ, when I call her at her home in the Cotswolds. “I simply loved it and just said, ‘Well, let’s add more!’” Her voice lowers to a whisper as she adds mischievously, “I wanted him to be a naughty pirate.’” 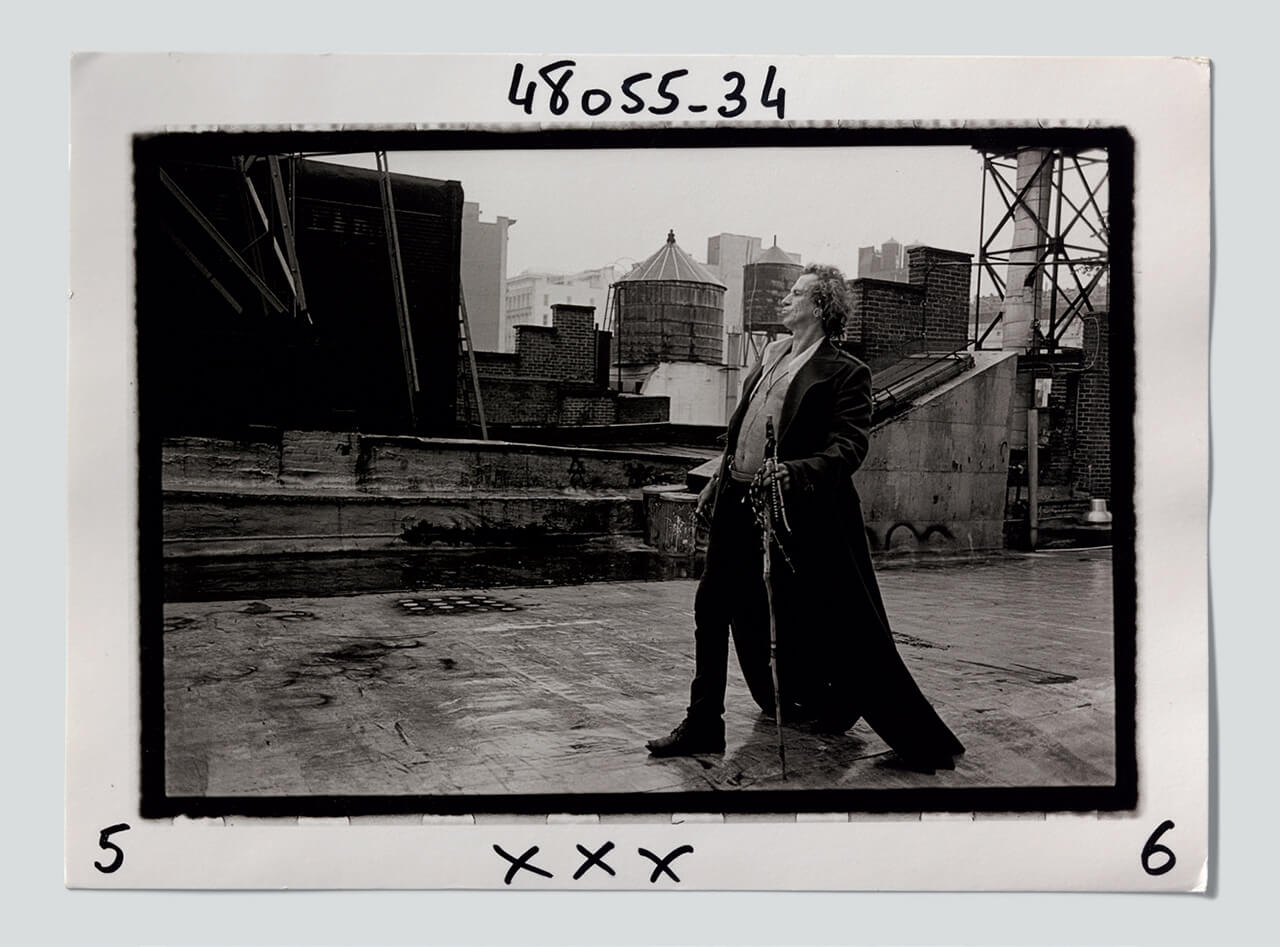 Four years later, Johnny Depp would famously take Keith Richards as the inspiration for his character in Pirates of the Caribbean. The actor not only exaggerated the rocker’s English drawl for Jack Sparrow, but also copped his trademark eyeliner, fabric headband and, notably, beads threaded onto the hair hanging from his temples. Hambro’s naughty pirate on set had become a naughty pirate on screen.

There are plenty of little details like this in Hambro’s career, all evidence that she is Britain’s great stealth stylist – someone you might not have seen or even heard of by name (she is notoriously reclusive when it comes to interviews), but you’ll have most definitely encountered her influence somewhere. Often, that will have manifested itself through the music industry in some way – a scene that Hambro’s career continues to be intertwined with.

“They’re wonderful to work with,” says Hambro when I ask her what inspires her about rockstars. “You can have fun, you can be playful, and you can break boundaries. I’m a storyteller. I adore fairy tales and naughty pirates, and when you look at rock stars, that’s what they are – that’s what Keith is. Entering their world, you can learn so much.” 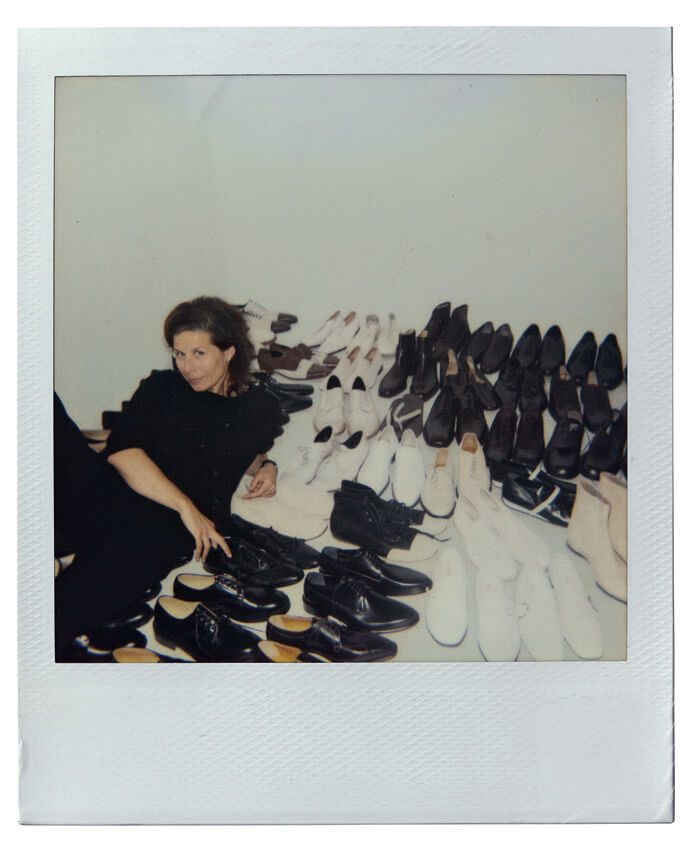 Music first crept into Hambro’s career when she worked with designer Thea Porter in the early 1980s. Having started out at British Vogue in 1979 during its golden era of big budgets and star staffers (“I mean, it was the place. You had Norman Parkinson and Cecil Beaton rushing down the corridor.”), her time with Porter in her early twenties meant organising international fashion shows and brushing shoulders with the rock bands who sported the designer’s Middle Eastern-inspired styles: The Beatles, Pink Floyd, the Rolling Stones. However, it was during her time at British GQ – a title she joined in 1992 – where it became central to her work.

“When I interviewed for the job, I said, ‘suppose instead of using moody, pouty boys in your fashion shoots, why don’t you use great, talented men?’ An Armani coat suddenly becomes interesting for a guy who’s not interested in clothes if someone he is interested in is wearing it, and I think most guys at some point in their life have dreamt of being a rock star.” 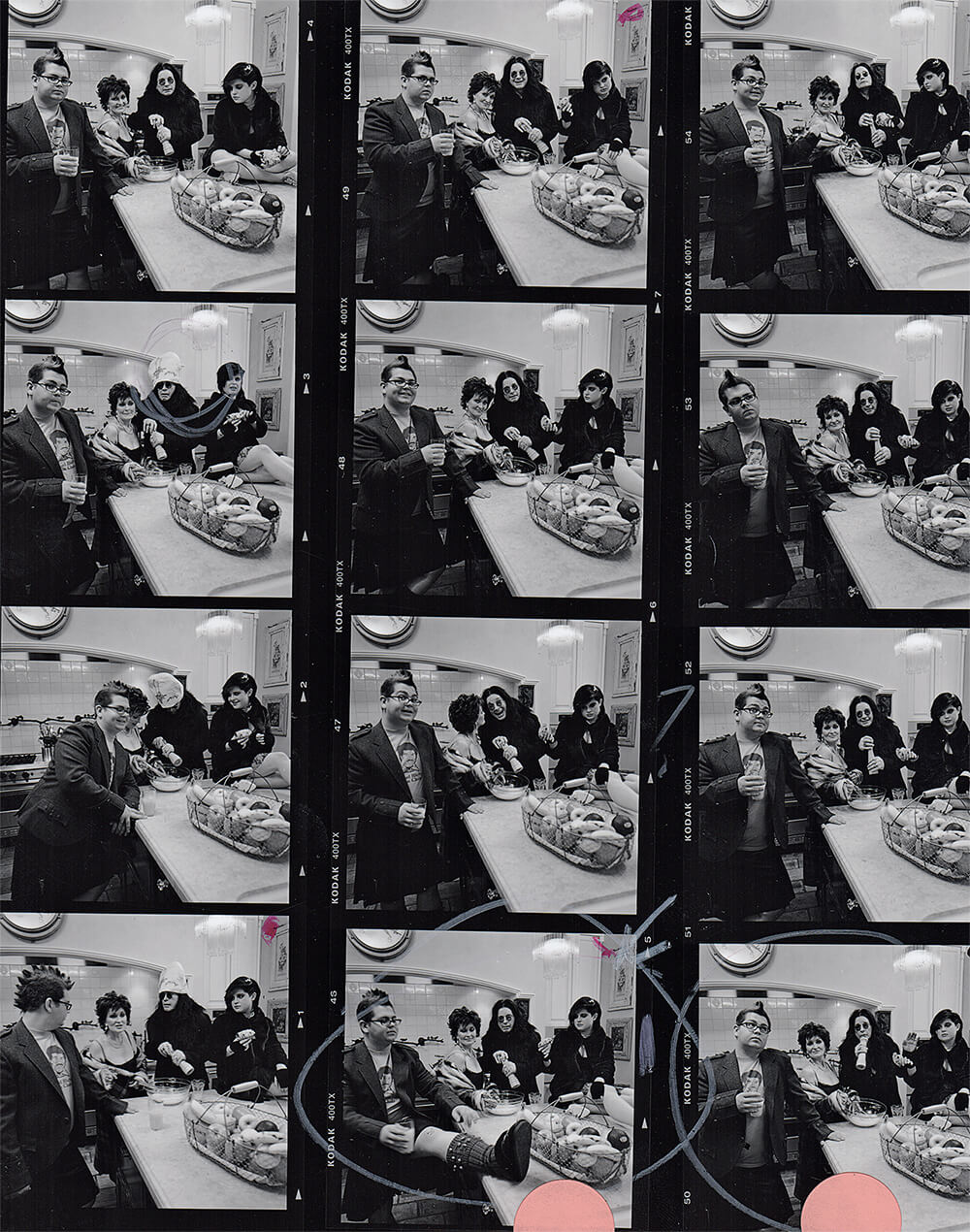 Hambro would go on to serve as Creative Fashion Director at GQ for a staggering 24 years, much of which is presented in her new book The Power of the Polaroid: Instantly Forever. Designed by Stephanie and Michael Nash (a design duo who coincidentally have a long history of creating album covers for a slew of legendary acts, from Roxy Music to Amy Winehouse to INXS), the tome is broken down into chapters that centre on the great photographers she’s worked with – a portfolio of jazz musicians in LA by William Claxton here, a series with Ozzy Osbourne shot by Guzman there. It’s the print equivalent of her greatest hits album, bringing together stories with sketches, contact sheets and, naturally, polaroids she took to give a unique behind-thescenes look at what goes into making magic on set. 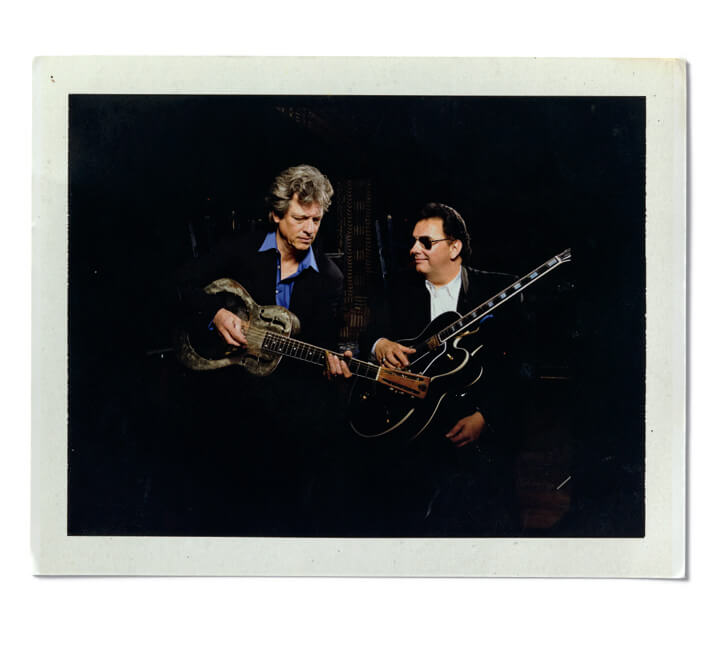 However, it only scratches the surface of her career. One shoot absent from this book is also one of her favourites: when she styled David Bowie for GQ in 1997.

“I was terrified,” she says, when I ask whether she was nervous to tell one of the most influential figures in modern menswear what to wear. “The night before the shoot, I had a nightmare that I turned up at the studio and there were only pink and blue crochet dresses to put him in!

“When David arrived on set, he shook my hand, looked me straight in the eye and simply said, ‘Show me the clothes’. Oh, God. Here we go”, she chuckles. “I had called in the entire new season men’s line from Paul Smith for the shoot. He loved it so much he said he wanted the whole collection for his world tour. I knew [Paul] would never be up for that, so I bagged up the entire collection for David after the shoot, then asked Paul’s PR, Gillian McVey, to ring his factory in Nottingham to reproduce the samples – which they did in a week. Paul didn’t find out what I’d done until I told him at a dinner about seven years ago. He howled with laughter.” 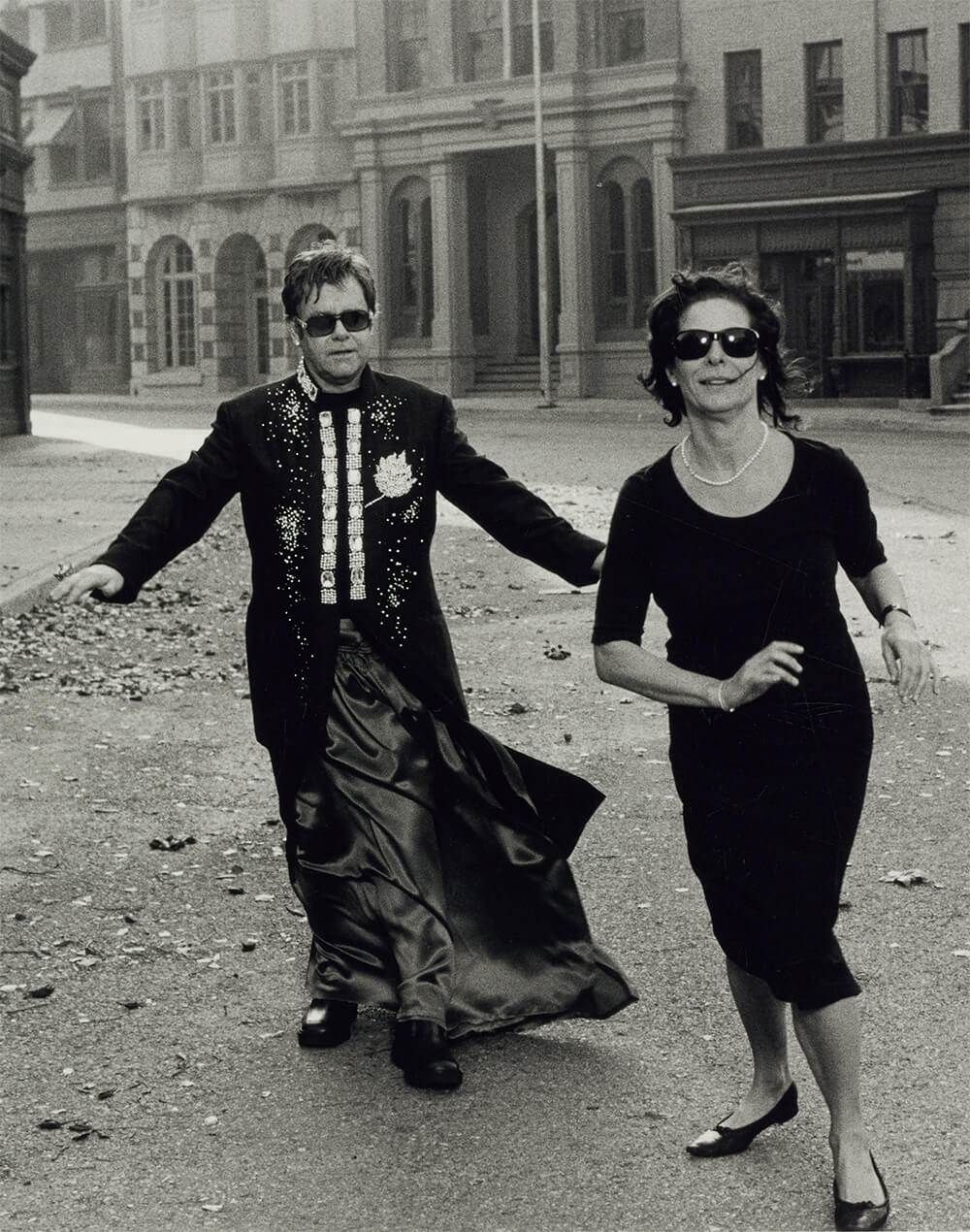 Styling musicians has become something of a side-hustle for Hambro. Around the turn of the Millennium she met Elton John while putting together a portfolio of the celebrity clientele of Richard James – who, at that time, was shaking up Savile Row with his modern tailoring and bright, airy shop. She has been the Rocketman’s friend and personal stylist ever since – he’s even written the foreword to her new book, alongside his husband David Furnish. What is it about the way Elton dresses that she thinks has made him resonate as a style icon throughout his career?

“Oh my god! Elton is playful, fun, full of energy – a force of nature. And he wears colour like no-one else,” she says. “The thing about musicians is that they allow themselves to get lost in who they are. So when they sing or play an instrument, they are themselves. When they dress, they are themselves. That’s very sexy. And I think that resonates with everybody.”

The Power of the Polaroid: Instantly Forever by Jo Hambro (Clearview, £30) is available to buy at Waterstones and Jo Hambro Creative now. Tearing up the fashion rulebook with 24/hr PJs.