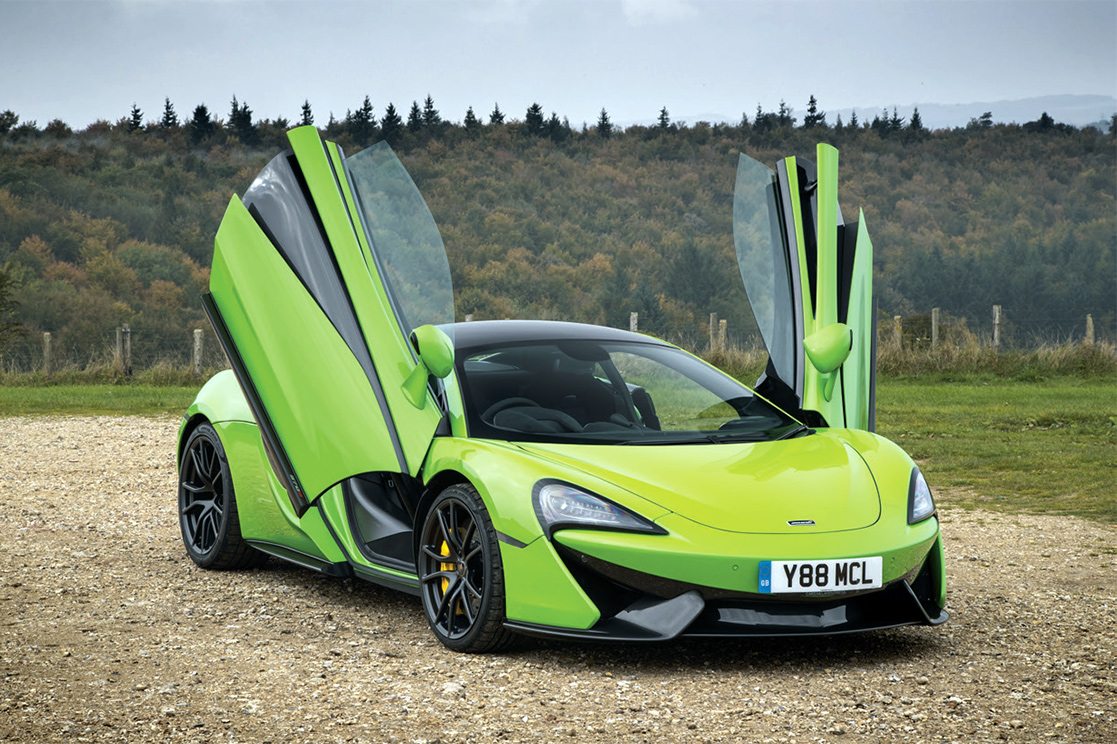 It may be considered McLaren’s ‘entry’ level model, but the 570S is often touted as their greatest achievement to date: it’s a true David to the Goliaths of the supercar world. We took it to rainy rural Gloucestershire to see what the car is like to actually live with…

Now, let’s just deconstruct this car review nonsense for a minute. Every month, we line up some super/hyper/ultracar to road test. Which means, we get to drive around doing everyday things, going about our usual business, in order to try and convey to you what it’s like to own one. Now obviously if you’re considering buying a 570S you would most likely take one for a test drive first, but that leaves out huge parts of what owning a car would actually be like. For instance, how does the 570S deal with 20cm of rain falling in a single day, or getting stuck down a single-track road with cows behind you and an angry farmer in front? I’ve gone through the pain and pleasure of this, so you don’t have to. You’re welcome.

The 570s contains the same recipe for greatness as its bigger brothers, using the same carbon fibre chassis tub and seven speed gearbox; however, the 570S doesn’t come with any moveable aerodynamic gadgets and the 3.8-litre twin turbo V8 develops 562bhp as opposed to the 600 plus figures of the 650s & 675LT. That being said, the 570s is certainly no slouch: in fact, its top trumps figures are identical to the legendary F1 of the Nineties, dealing with 0-60mph in 3.2secs and 0-100mph in 6.3. No slouch indeed. 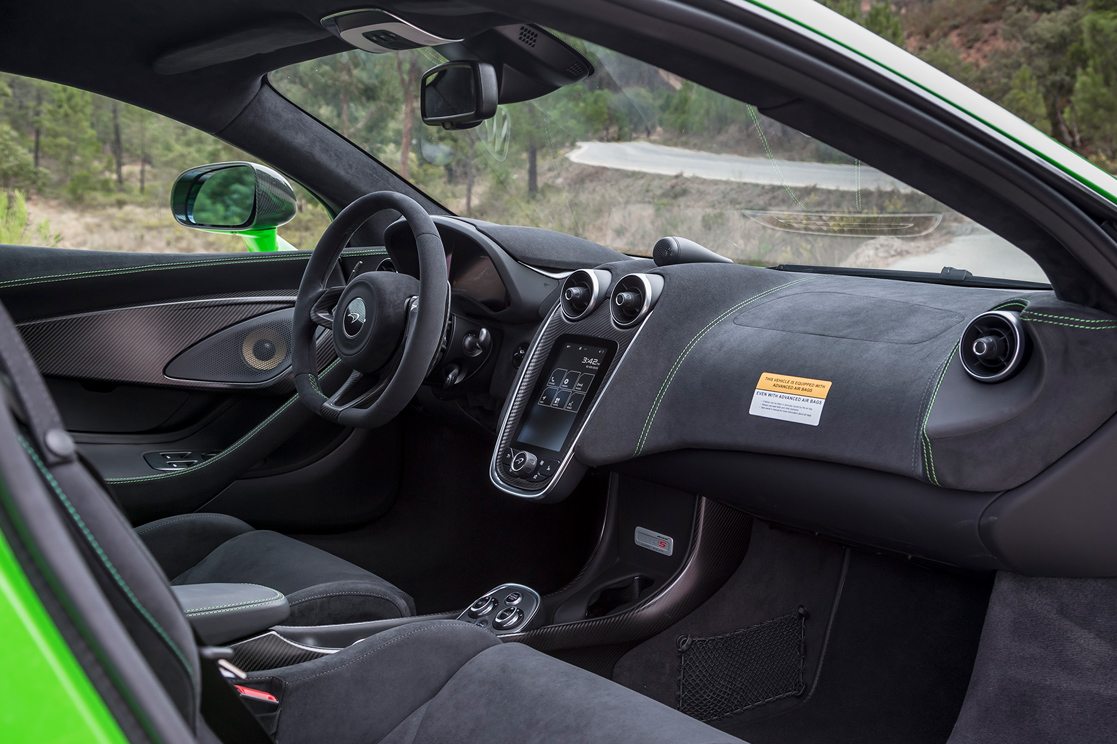 Getting in the car is a joy; there’s something about scissor (dihedral for the tech-heads) doors that are the pinnacle of cool. They manage to bring out your inner child and you might find yourself searching for an excuse just to get in and out. My record is four times while stopping at a restaurant for lunch (damn my forgetful brain). I even had a passerby ask if I could simply open the car for his amusement – and of course, I obliged. The only problem came when my 6’3” 19 stone brother wanted a ride and although once in he was comfortable, his entrance was less than graceful. 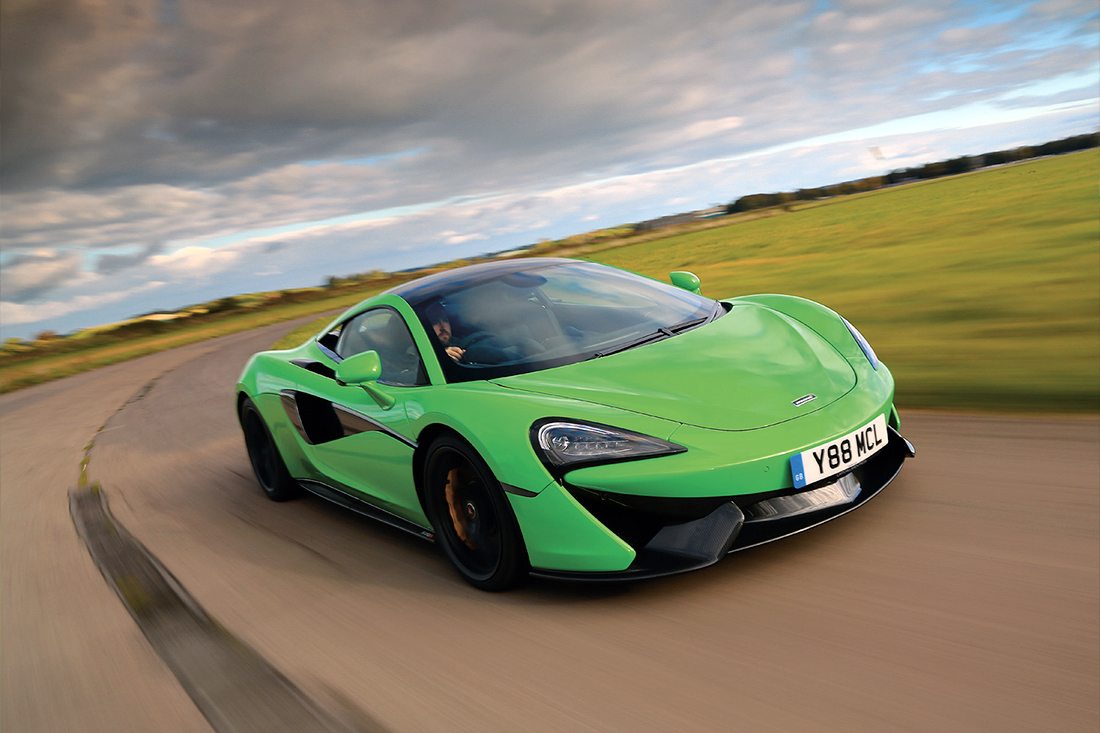 Inside, the cockpit cradles you whilst seeming larger than its predecessors, thanks to the hollowing of the centre console below the ‘infotainment’ screen. Lashings of alacantra, leather and carbon fibre give it a distinctly luxe feel, and though some of these will come at an additional expense, it is worth it if you’re buying such a car. There are also lots of cubby holes and a good-sized parcel shelf, perfect for if your passenger can’t grasp the idea of travelling light. The McLaren in-house ‘infotainment’ system has been improved, although it is still far from perfect, with some of the navigation options and controls less than intuitive. You will also want to opt in for the Bowers & Wilkins speakers, which being a bit of an audiophile were a must for me, even if for the most part you’ll be listening to the V8 soundtrack. 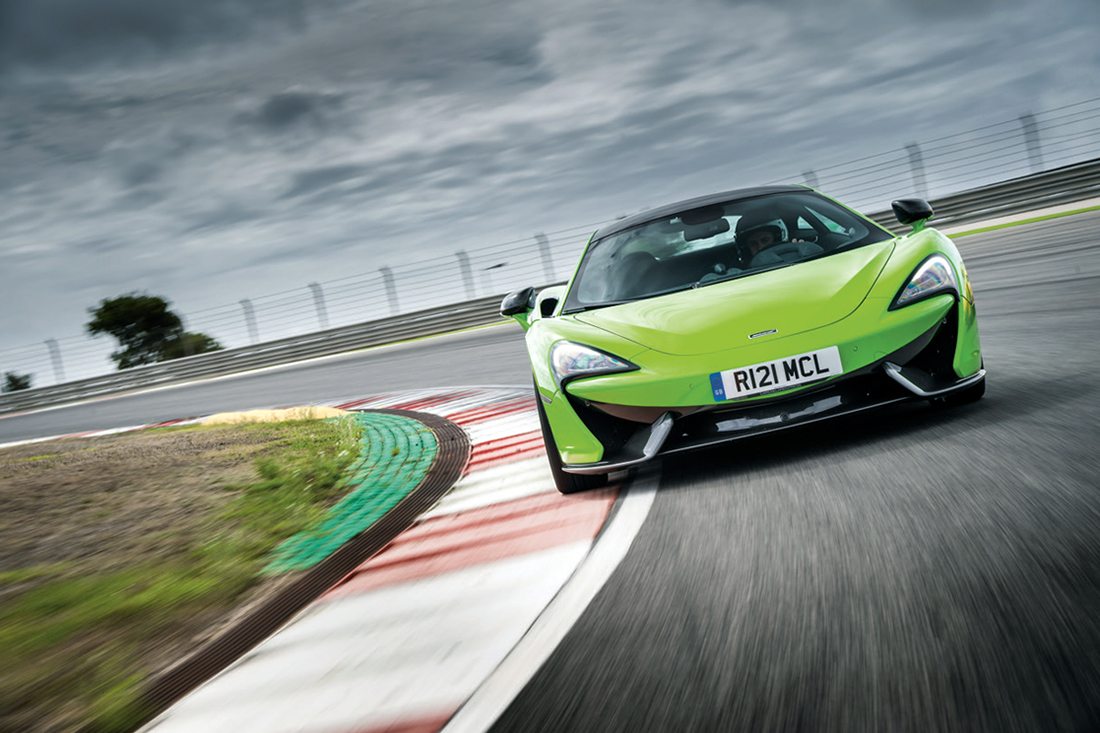 To drive the 570S is brilliant in nearly every area: the traction control system is awe-inspiring, kicking in at just the right time, giving you the impression that you’re a better driver than you probably are. The gear changes are seemingly instantaneous, while the power delivery is sharp and highly responsive through all gears.

The usability of the car is perhaps the aspect that most astounded me. Yes, perhaps, it’s not quite as versatile as other sports cars, but in my opinion this really isn’t a sports car and what it lacks in ride comfort it makes up for in droves in other areas. It’s able to poodle around country lanes with ease and even though the car is a little wider than the 650S the visibility from the inside is very good, making it easier to manoeuvre. The only issue I had was having to undertake a 50-point turn to escape an angry-looking farmer, much to my embarrassment and to the local walkers’ delight. 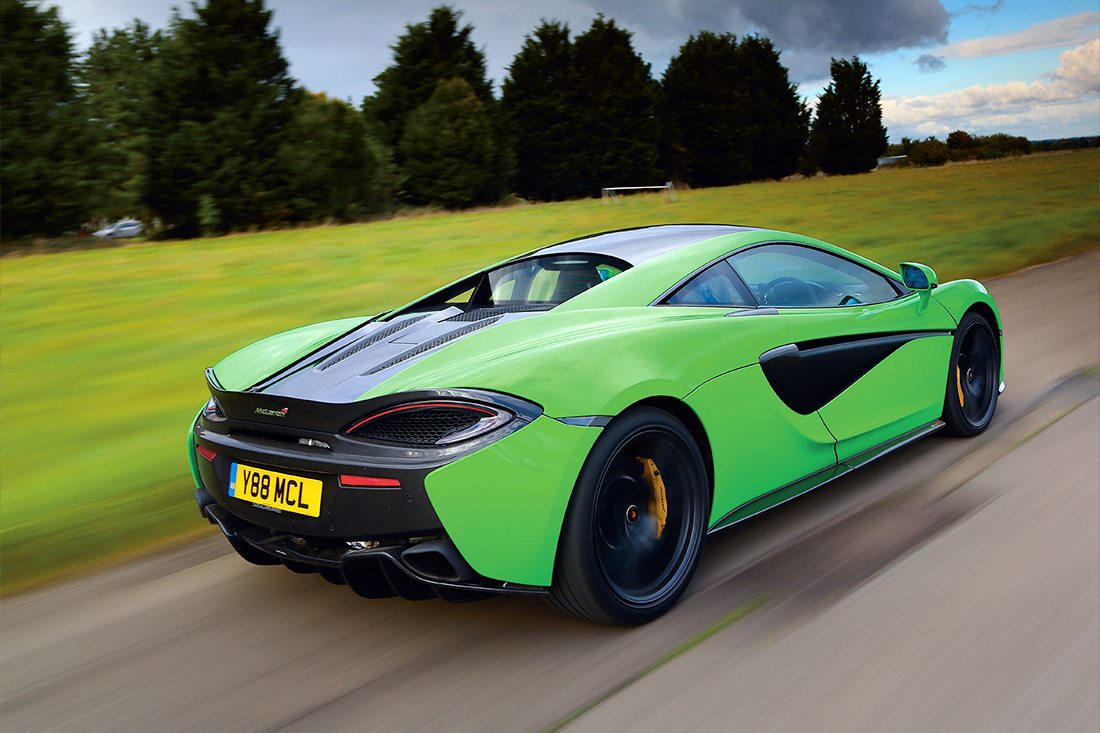 When the 570S was launched back in 2015 I wasn’t particularly bowled over by the styling. It had hints of the P1 and looked somewhat more compact and squat than the 650S, even given its similar dimensions. But after living with a car you gain a completely different perspective. You learn to either love or hate, depending on experience. And after my time was up I still found myself thinking about the design. The slick new light detailing, the P1 style front and above all the rear end – resembling an aqueous alien organism – designed to utilise the air creating more downforce through the rear, without the use of a vulgar rear wing. 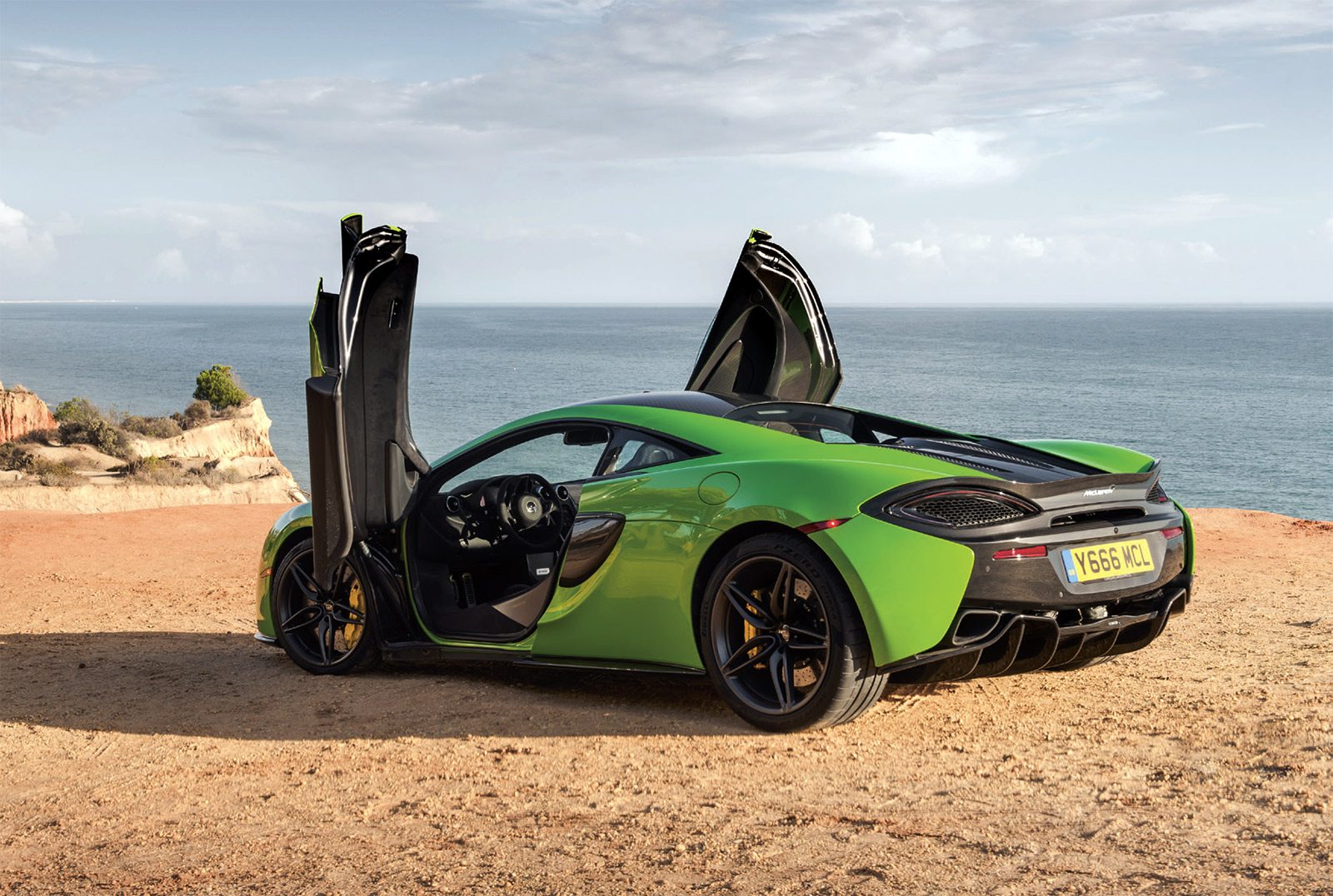 It’s genuinely hard not to be gushing about this car. It manages to encapsulate what a perfect car is: fast, nimble, effortlessly cool, functional and comfortable, and all the while managing to avoid the trap that other supercars can fall into – being too over the top or ostentatious.

By the time you’re reading this you will have probably already seen leaked pictures of the 720S or P14, a replacement for the 650S, and McLaren will be planning a 15 car rollout leading up to 2022 which will incorporate their new carbon fibre tub and powertrain. However, take my advice – don’t wait, they’ve already reached near perfection.