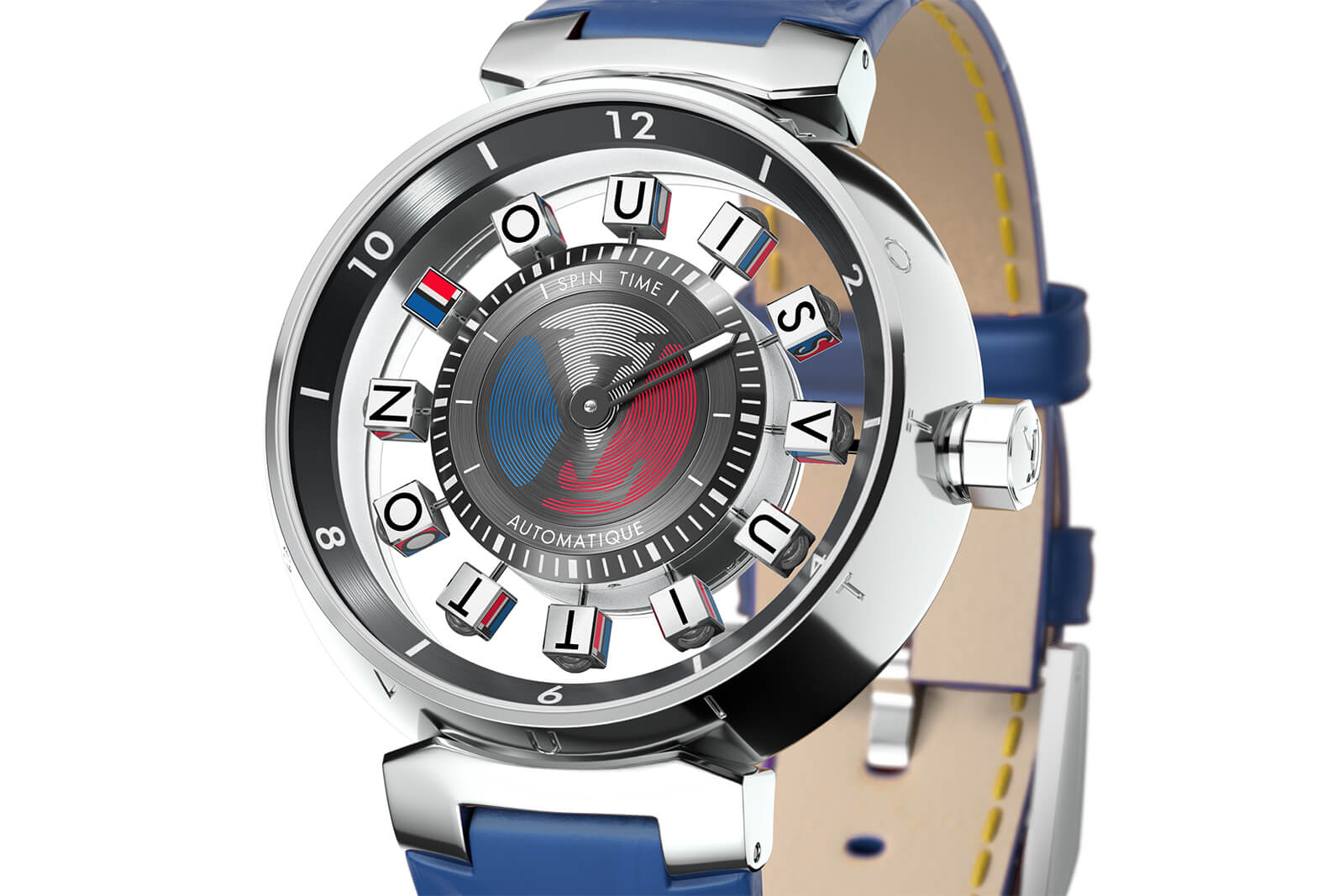 The Tambour might not be as iconic as, say, the Chanel J12, but as fashion house timepieces go it’s up there. Louis Vuitton’s flagship watch has seen plenty of iterations over the years too, making it one of the most eclectic collections out there. Case in point, the Tambour Spin Time Air.

Louis Vuitton do like to take things literally, provided there’s a bit of tongue in cheek involved. The new Tambour takes its name from the fact that the indexes literally do spin, displaying the hour with a contrasting colour. First, they flick one way, then the other, effectively becoming a 24-hour watch. 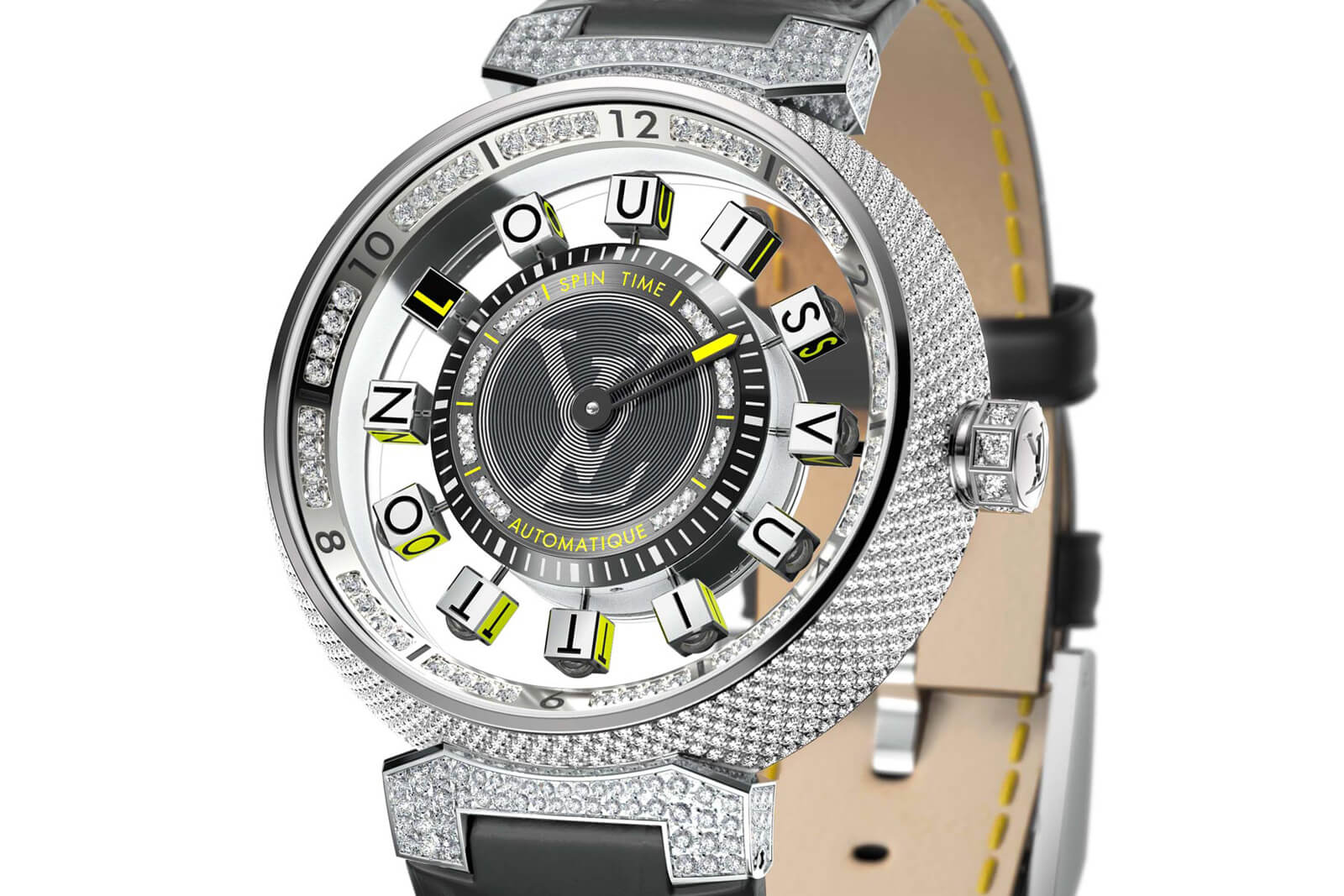 In essence, it’s a jumping hours with all the bells and whistles you can attach to the complication. The minutes on the other hand are read simply off the central hand above the big LV monogram, using the inner chapter ring. 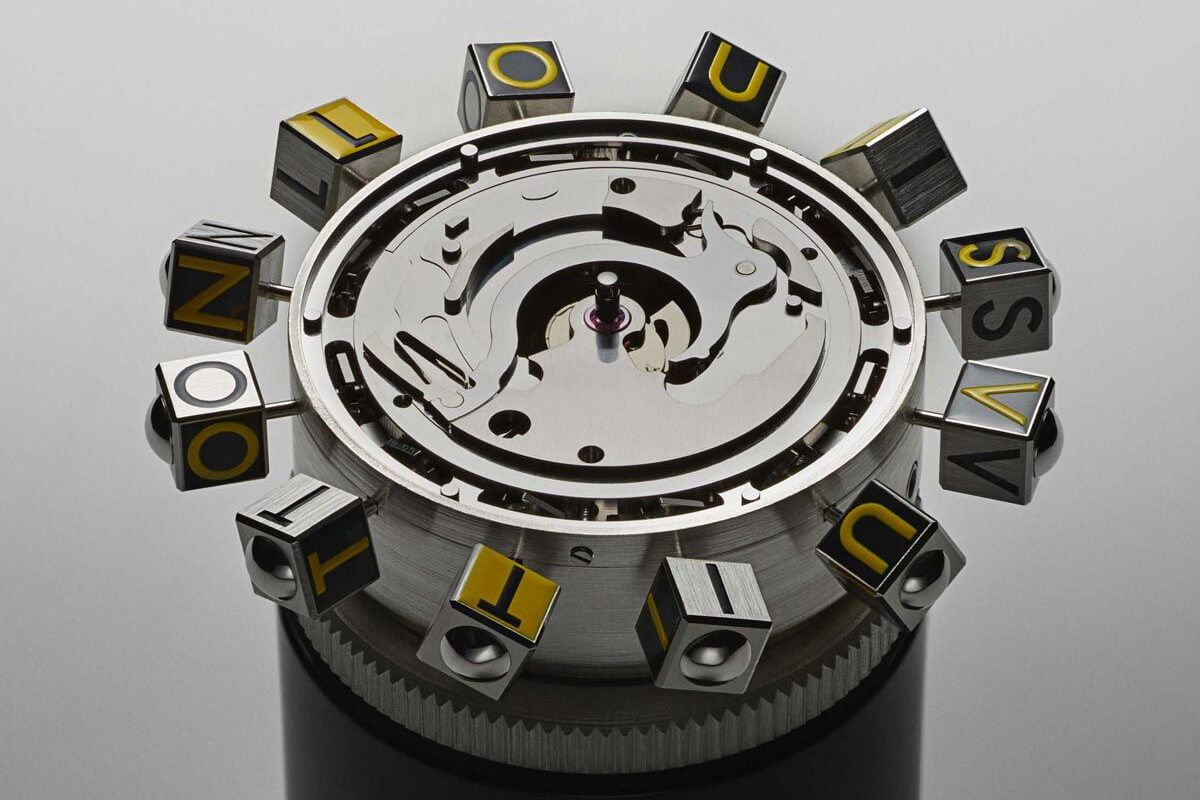 So far, that’s been done before in previous Tambour models, so what’s new? Well, the ‘Air’ comes from sheer space. The signature cuboid spinners jut out into nothingness, where the entire dial and movement have been cut away, leaving something that I’d hesitate to even call skeletonised. The result is one of the oddest yet most architecturally intriguing watches of the year so far.

Despite the standard Tambour case, the movement and entire inner workings of the watch are only connected to the case via the crown, making for a precariously delicate-looking piece. That doesn’t stop it being a spectacle when switching from hour to hour. 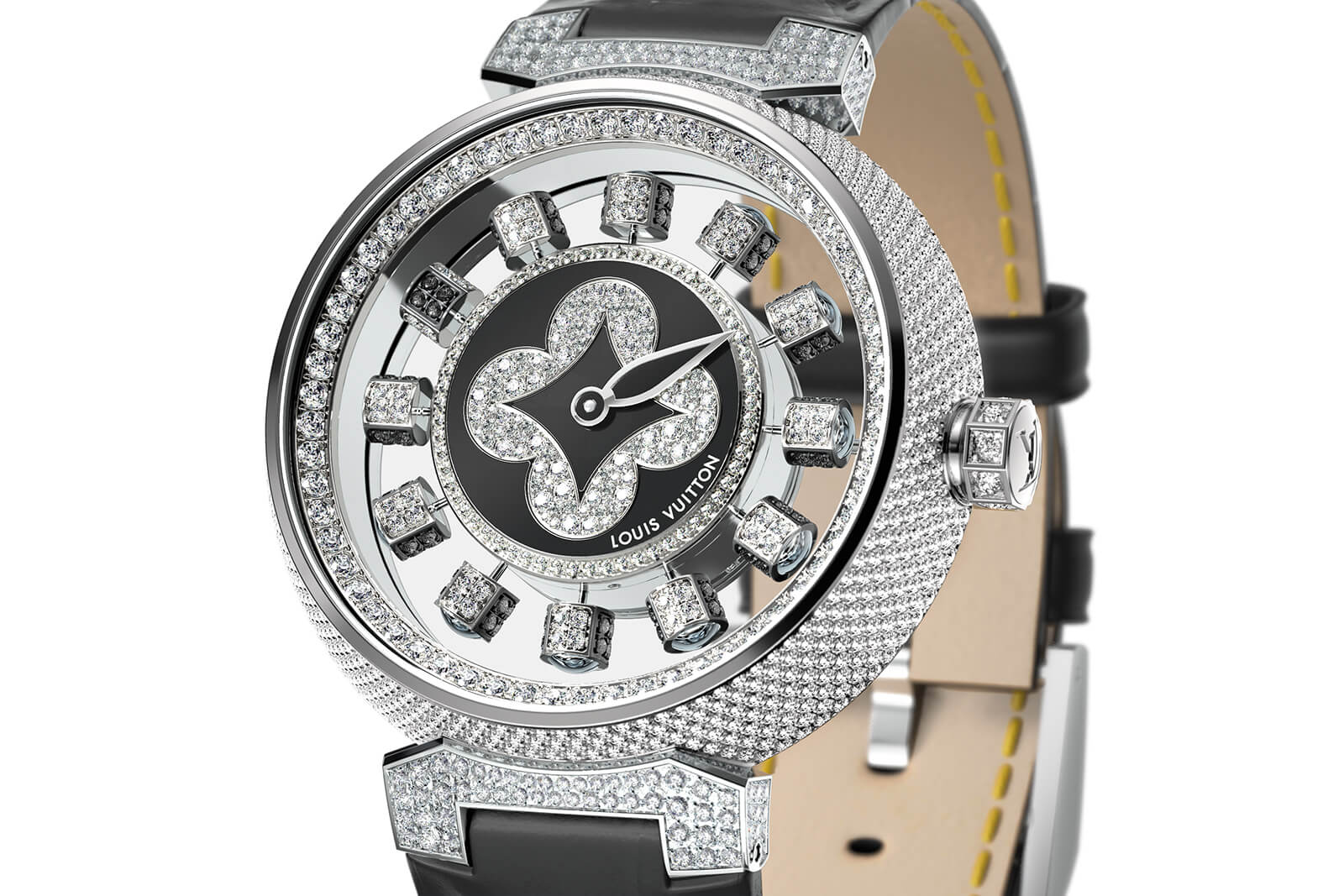 That spectacle’s amped up even more on the diamond-set versions, which switches out the egocentricity of the Louis Vuitton lettering for actual numerals and plenty of varicoloured gemstones.

In total there are 7 new pieces in the collection, three for men, four for women. Instead of ‘for women’ though it might be best to just say diamond-set, as each piece is housed in the same 42.5mm white gold case, water resistant to 50m. 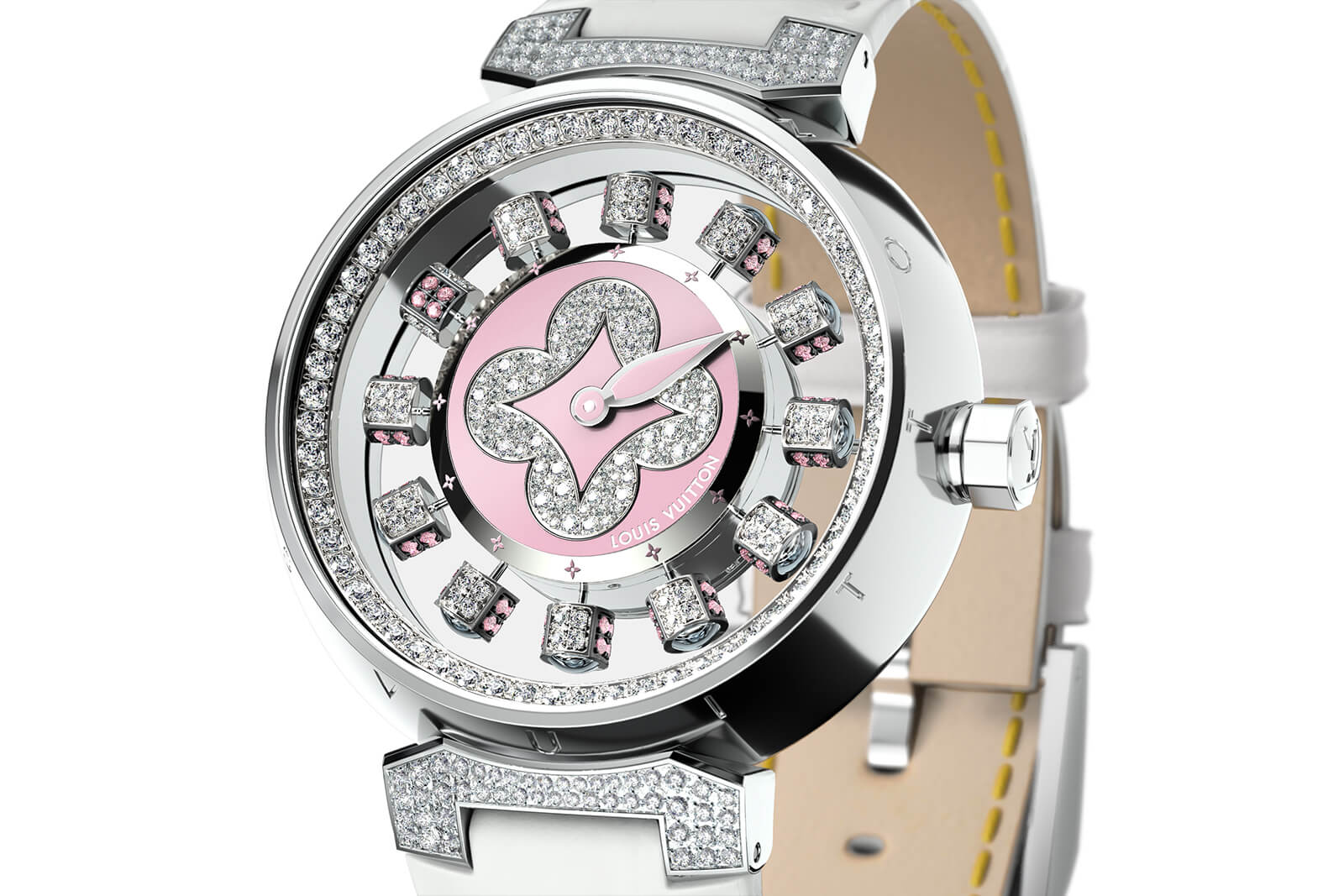 They’re also powered by the same movement, one which has seen an update since the Spin Time first came on to the scene 10 years back. The new calibre LV88 automatic movement boasts a 35-hour power reserve. Yes that’s not the greatest power reserve in the world, but it’s a special snowflake so can be forgiven that one downside.

Of the lot, our favourite is by far the simplest: the black and yellow men’s version. There’s enough going on with the jumping hour cubes that it doesn’t need anything else. Even the blue, red and white version seems a bit too busy in comparison. 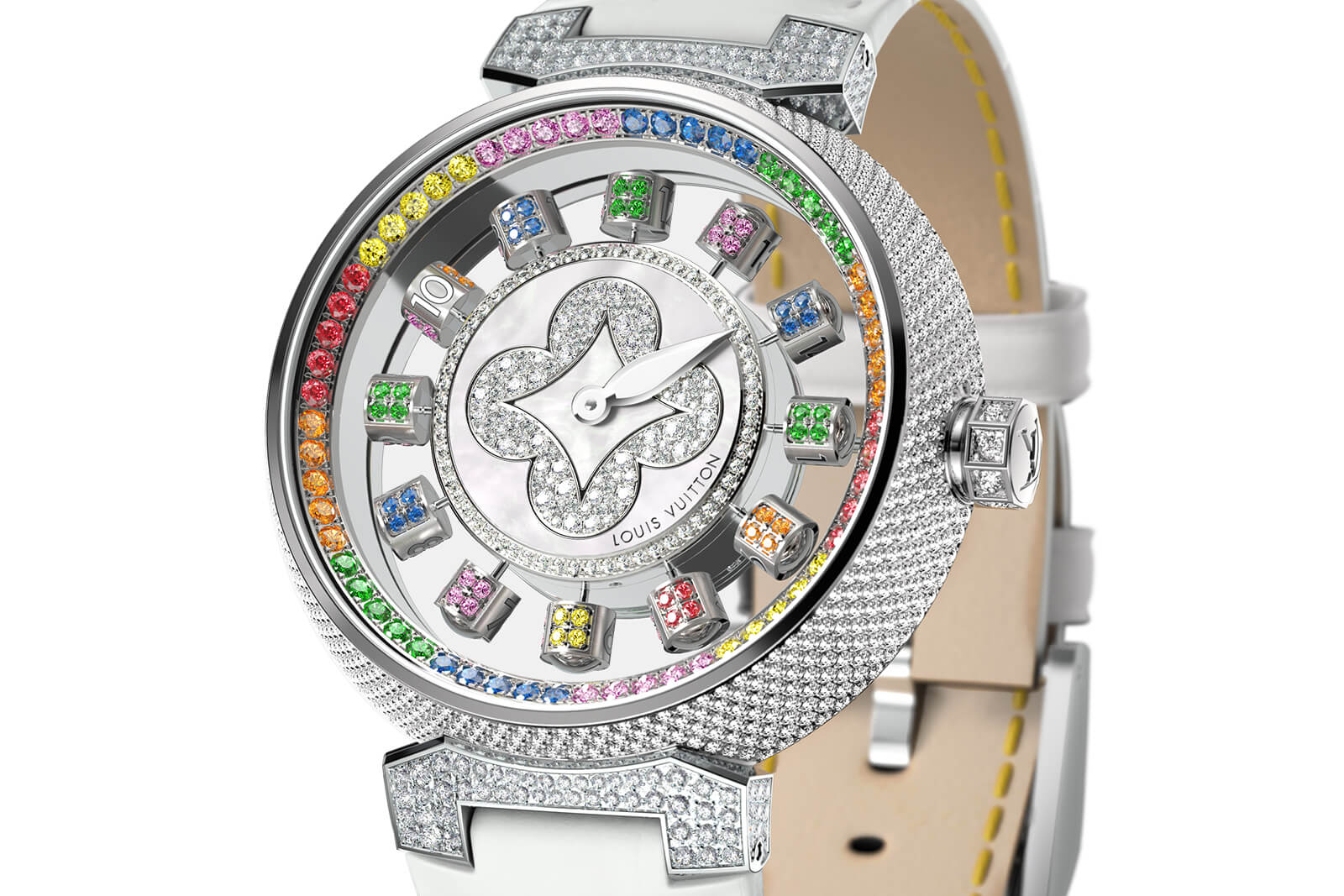 Time and again Louis Vuitton has proven that they can make watches with the big boys, but with the Spin Time Air they have something even rarer: a piece of haute horology that’s not just genuinely well-made but genuinely fun.