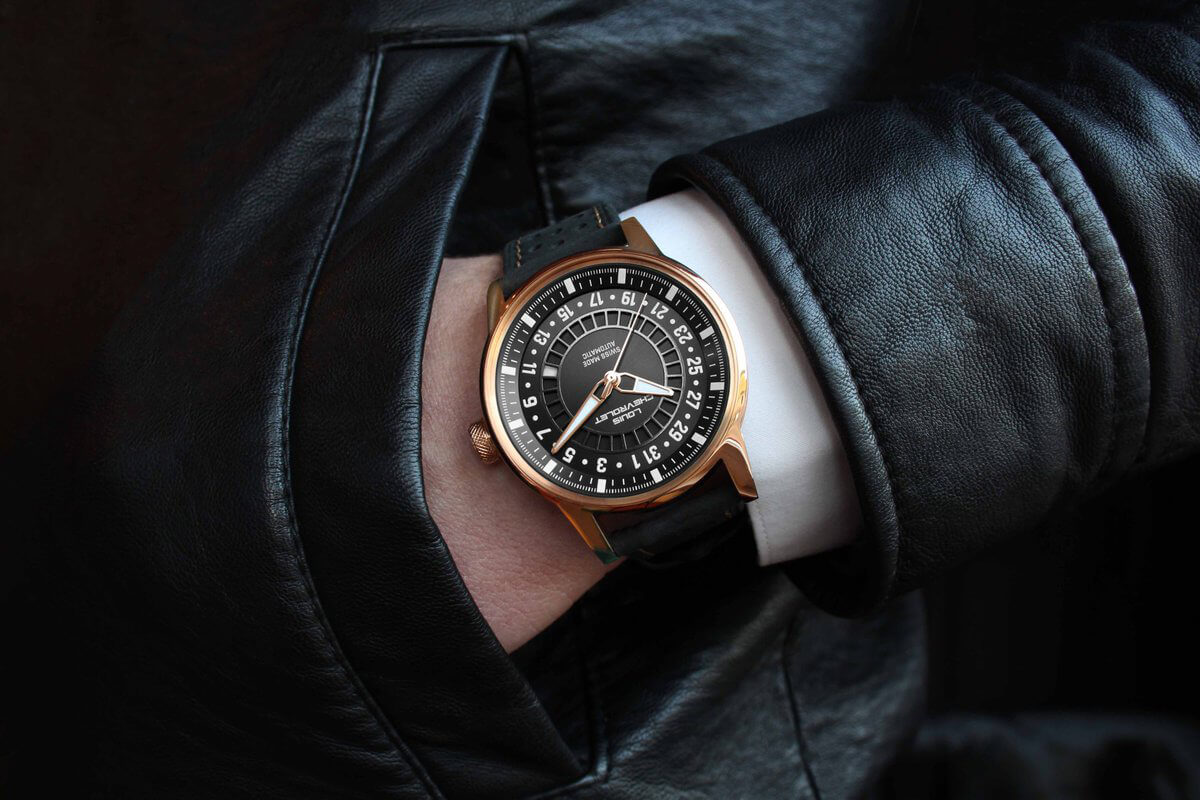 A lot of watches come equipped with a date indicator; generally it doesn’t exactly stand out. It’s a small window; there’s a small number inside it you can barely read. That’s about it. Louis Chevrolet on the other hand has made the humble date indicator the heart of their new project: the Frontenac Flying Date.

Their approach to the humble date indicator is different from most. Rather than using a simple numbered disk with a window cut into the dial, instead it takes up the greater part of the dial. The concept is easy to understand, if hard to put into practice: the static dates are arrayed around the edge of the watch and the indicator ‘flies’ 360 degrees around the dial, highlighting the appropriate number. 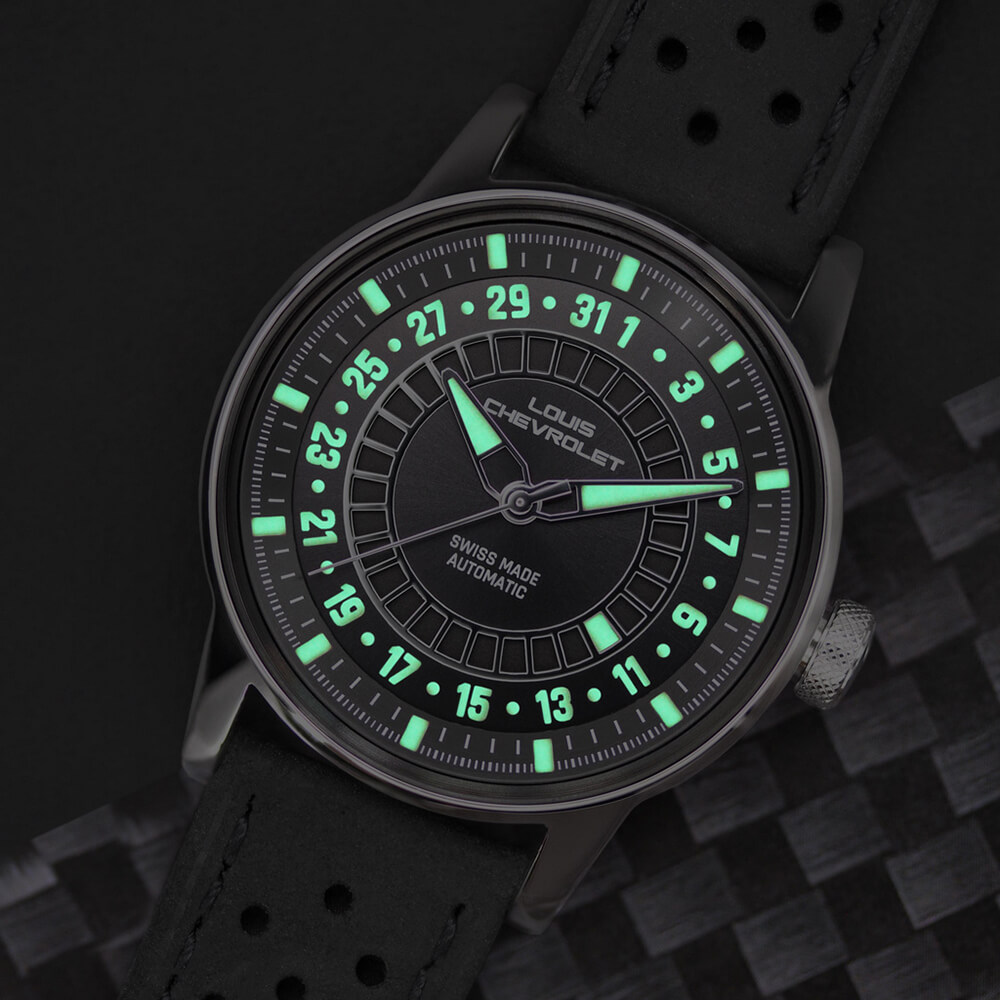 It’s a novel, instantly-readable way of displaying the date and, more importantly, turning the often thrown-in complication into a real feature of the watch. It adds to the technical look of the black and white dial and makes full use of the substantial stainless steel case. 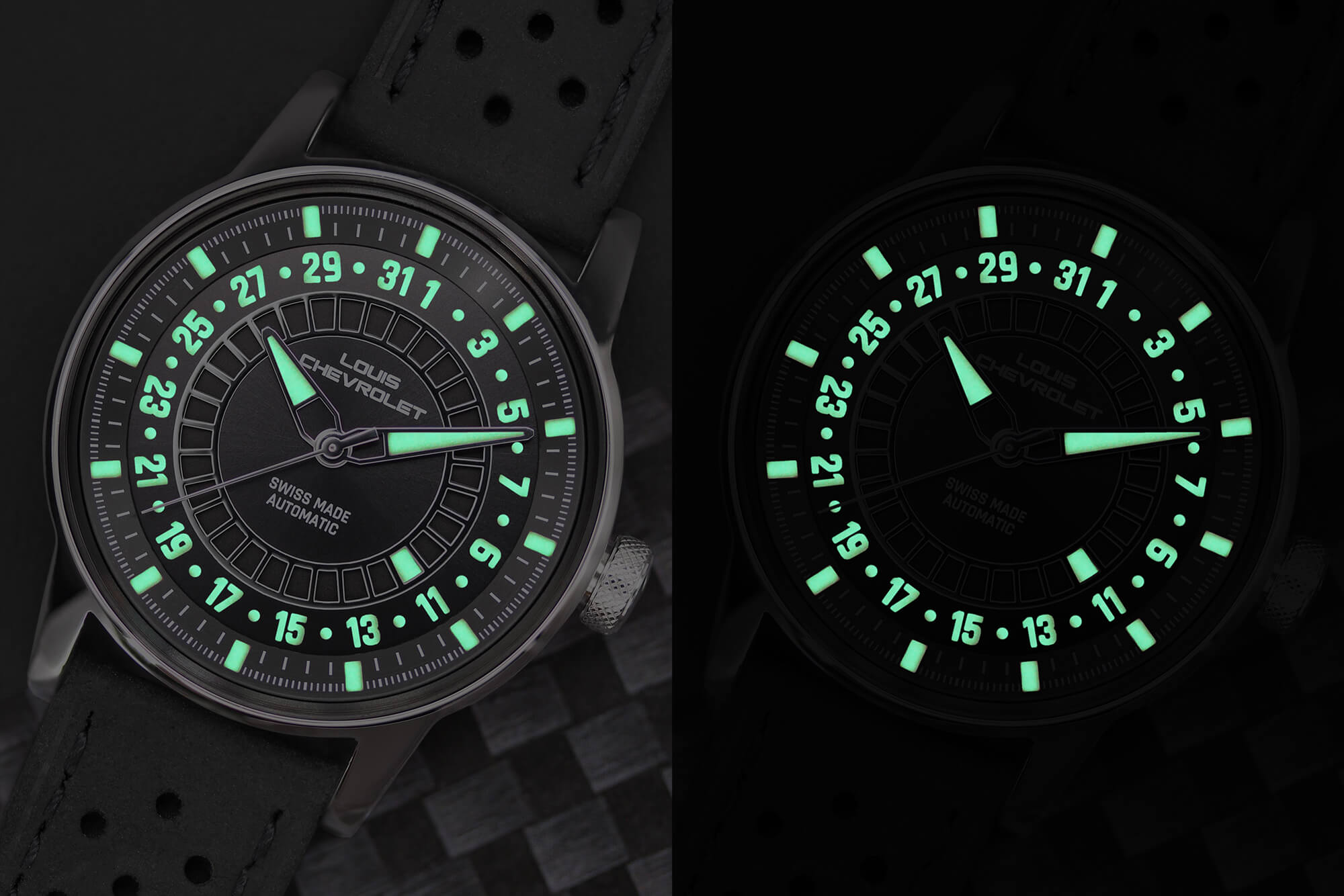 At night however, is when the Louis Chevrolet Flying Date really shines. Every numeral is covered in bright lume, as is the date indicator, lending a green glow to the watch in low-light conditions. The less light there is, the brighter the dial. 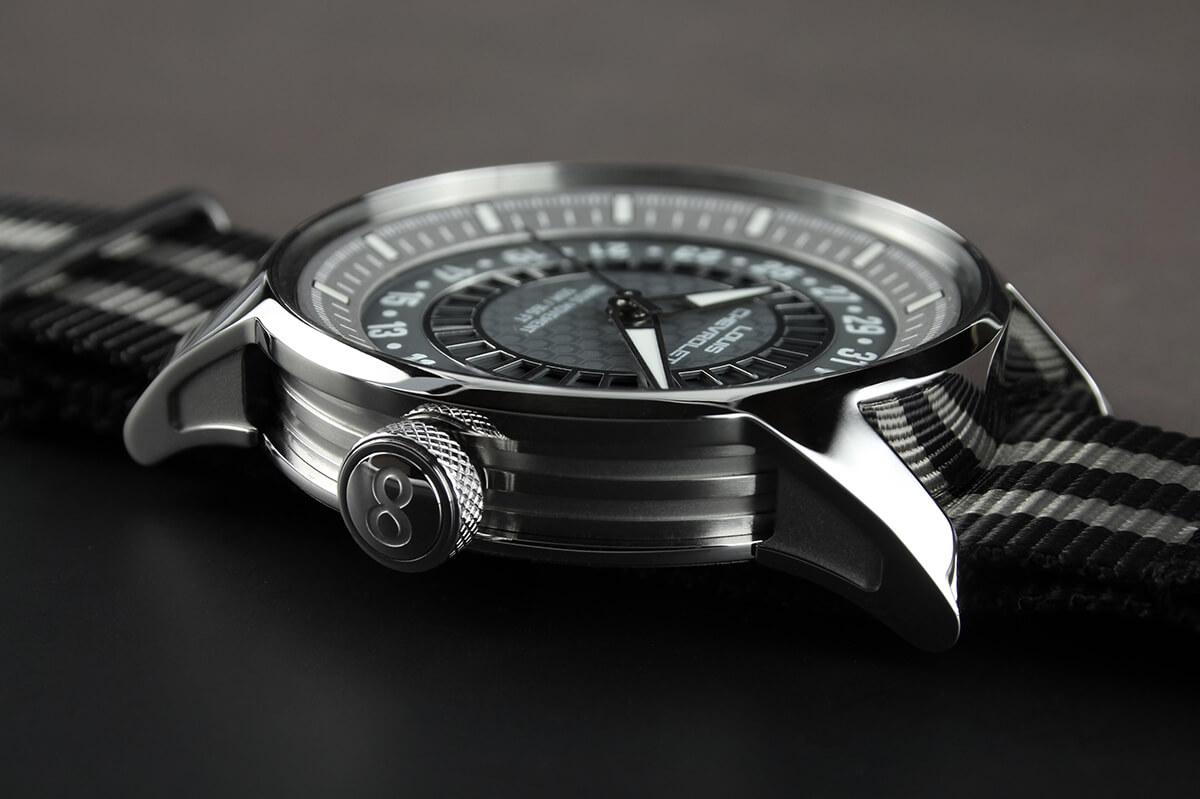 The watch comes equipped with either a quartz movement in the case of the LC11 or an automatic for the LC9, the latter with a 38-power reserve. Both are based off solid ETA movement, modified by Louis Chevrolet with the new, patent-pending Flying Date. 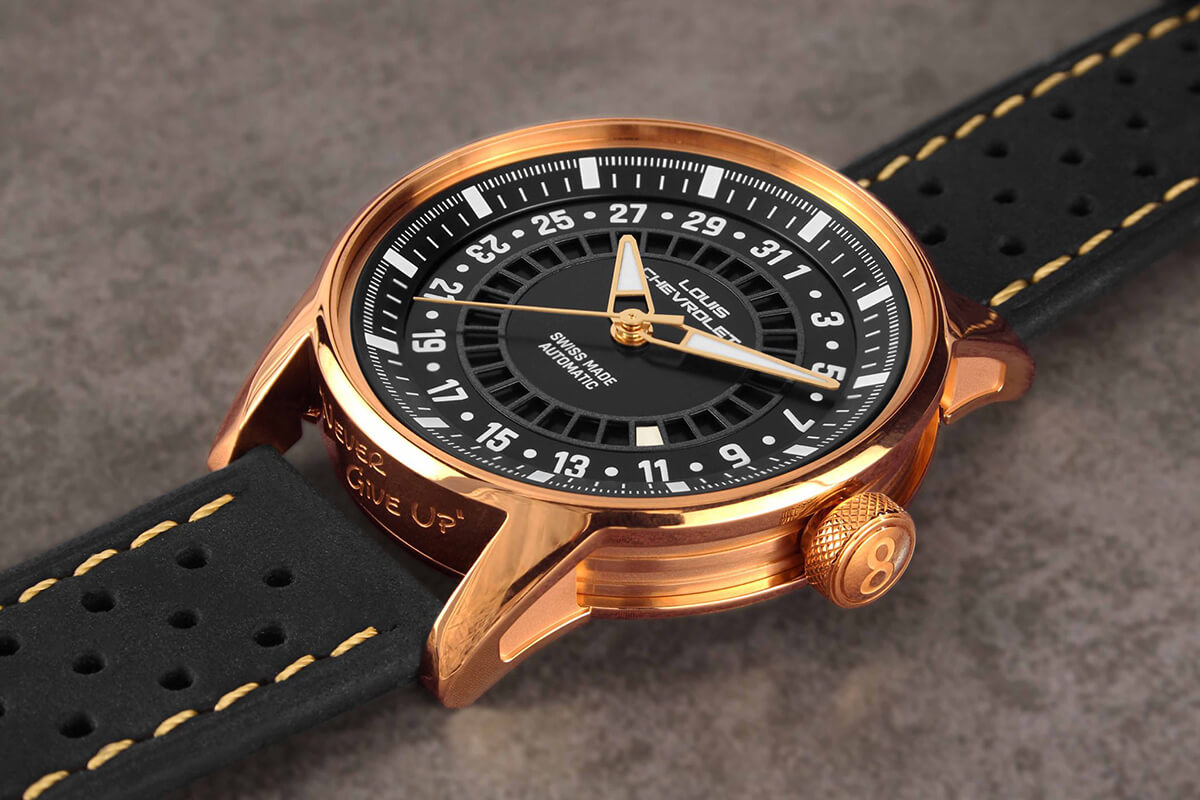 Colourwise, the stainless steel case is available in rose gold, black or blue PVD coatings. No matter which you go for though, all come with both a leather racing strap (perforated) and a NATO-style nylon number, complete with quick-release spring bars. It’s a nice finishing flourish to an inventive watch. 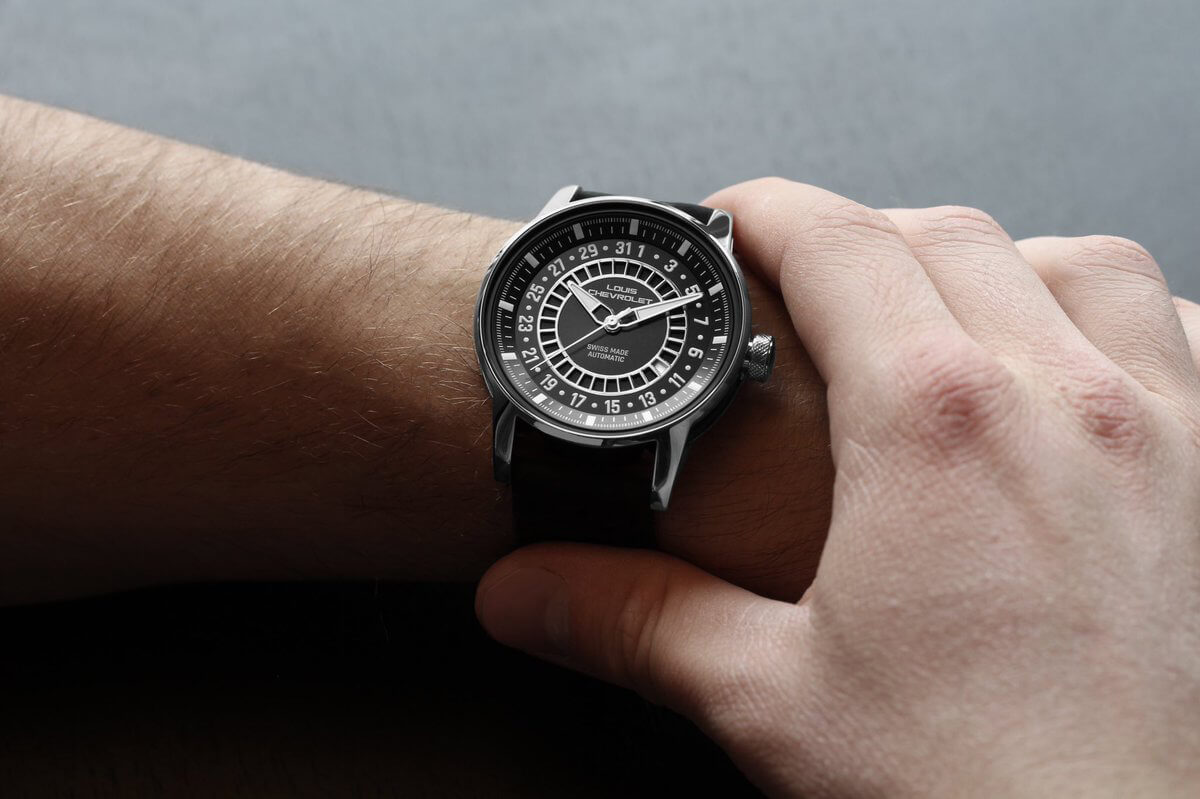 Now, don’t get your wallet and try to buy the Frontenac Flying Date quite yet; it’s currently going through its Kickstarter campaign. However, if you want to make sure the watch becomes reality – and net yourself a nice discount on top of the already-accessible watch – you can help the campaign out here.