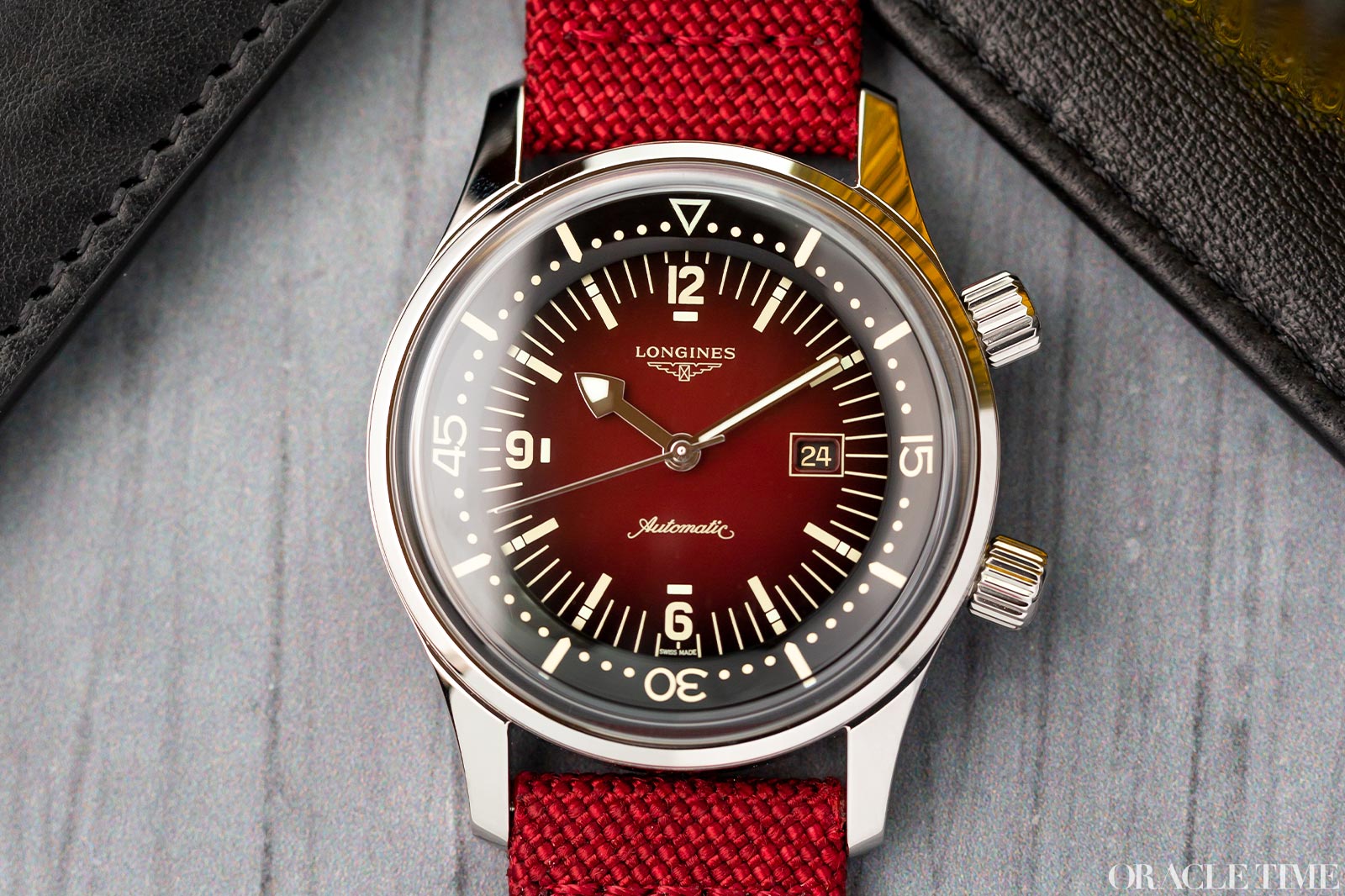 How big should a dive watch be? When it comes to less specialist timepieces, there’s always a solid discussion around sizing. What diameter suits whose wrists, how small is too small or how large is too large. But while most of the watch world drifts back to vintage sizing, dive watches have remained staunchly in the 40mm plus category. That’s why, when Longines relaunched their retro cool Legend Diver in a smaller, 36mm size, I just had to give it a go.

Originally launched way back in 2007, the Legend Diver actually takes its design cues from a Longines Super Compressor from 1959, the golden age of underwater exploration, hence the signature two-crown construction. One winds the watch and sets the time as per usual, while the other sets the inner bezel, which takes the requisite diving scale under the crystal rather than on the outside of the watch. 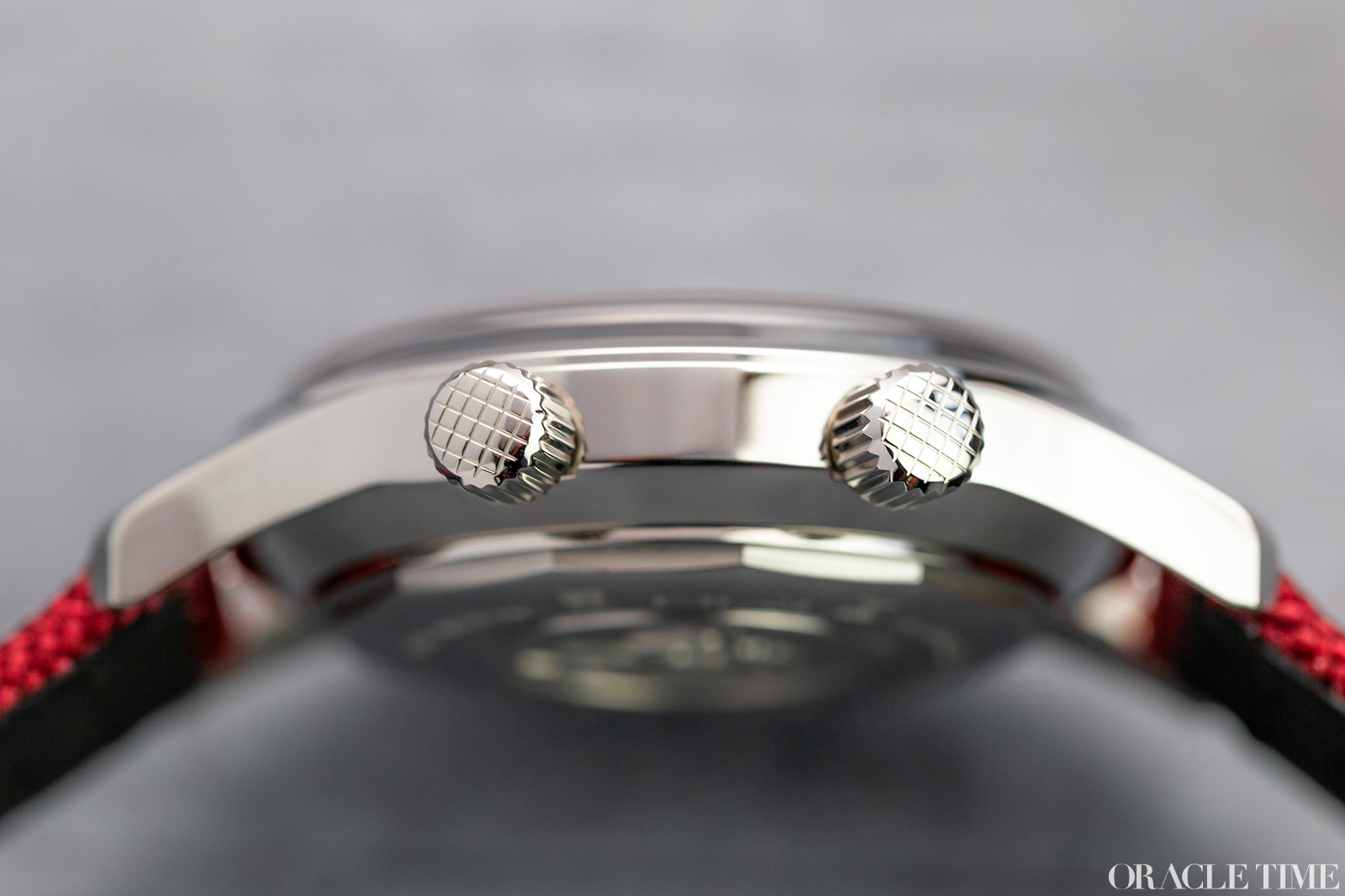 The result is a more streamlined, elegant look than most chunky divers can accommodate, a world away from Longines’ diving stablemate the HydroConquest. It’s also worked incredibly well for the watchmaker as, honestly, all of their throwback archival designs have.

What’s different about this new watch is twofold. First is that burgundy dial. It’s magnificently rich, with the fumé transitioning from black at the outer edge to near scarlet in the centre. While the sandy brown dial released alongside this version is cool, it feels faded rather than lustrous. Plus, I just happen to like red dials, especially done this well. The Fumé also has a more practical reasoning as it lets the indexes stand out a bit more; lumed beige against black is a lot more visible than against red. 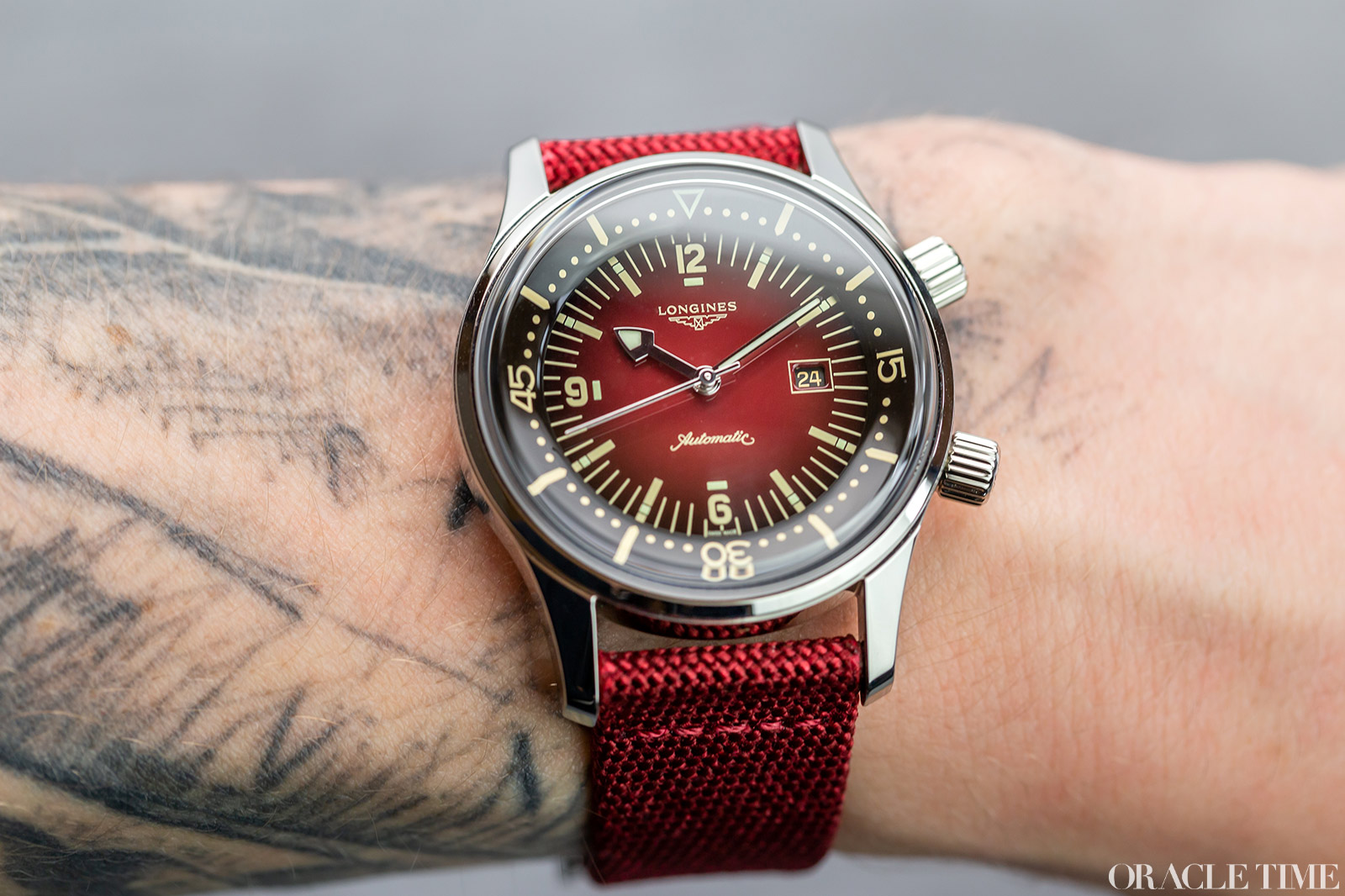 Then of course, there’s the size. Among the Legend Diver’s new Fumé-dialled offerings, the Burgundy is only available in a 36mm case size. Personally, I think that’s an odd choice; more variety means more buyers potentially buying into a colour like this. But I guess given its vintage twang, there’s probably plenty of overlap in the Venn diagram of appreciators of funky colours and smaller cases. So how does it wear?

First off, I’d argue against anyone calling this a women’s size. Nobody would say that about last year’s downsized Explorer and, with the Legend Diver’s two-crown construction, it definitely feels a little larger than it measures. Yes, the technical look of the dial can feel a little more crowded than I’d like, but thanks to that sloped inner bezel and oversized six, nine and 12, it’s easy to read. I’d have preferred a matching three instead of the date window though.

On the wrist it’s a serious pop of colour, a touch brighter than you might expect, particularly on the matching fabric strap. It’s svelte, comfortable and doesn’t really feel like a serious diver. That might put some people off, but given the Legend Diver’s 300m water resistance, it shouldn’t. It’s versatile enough to genuinely work as a tool and an accessory. 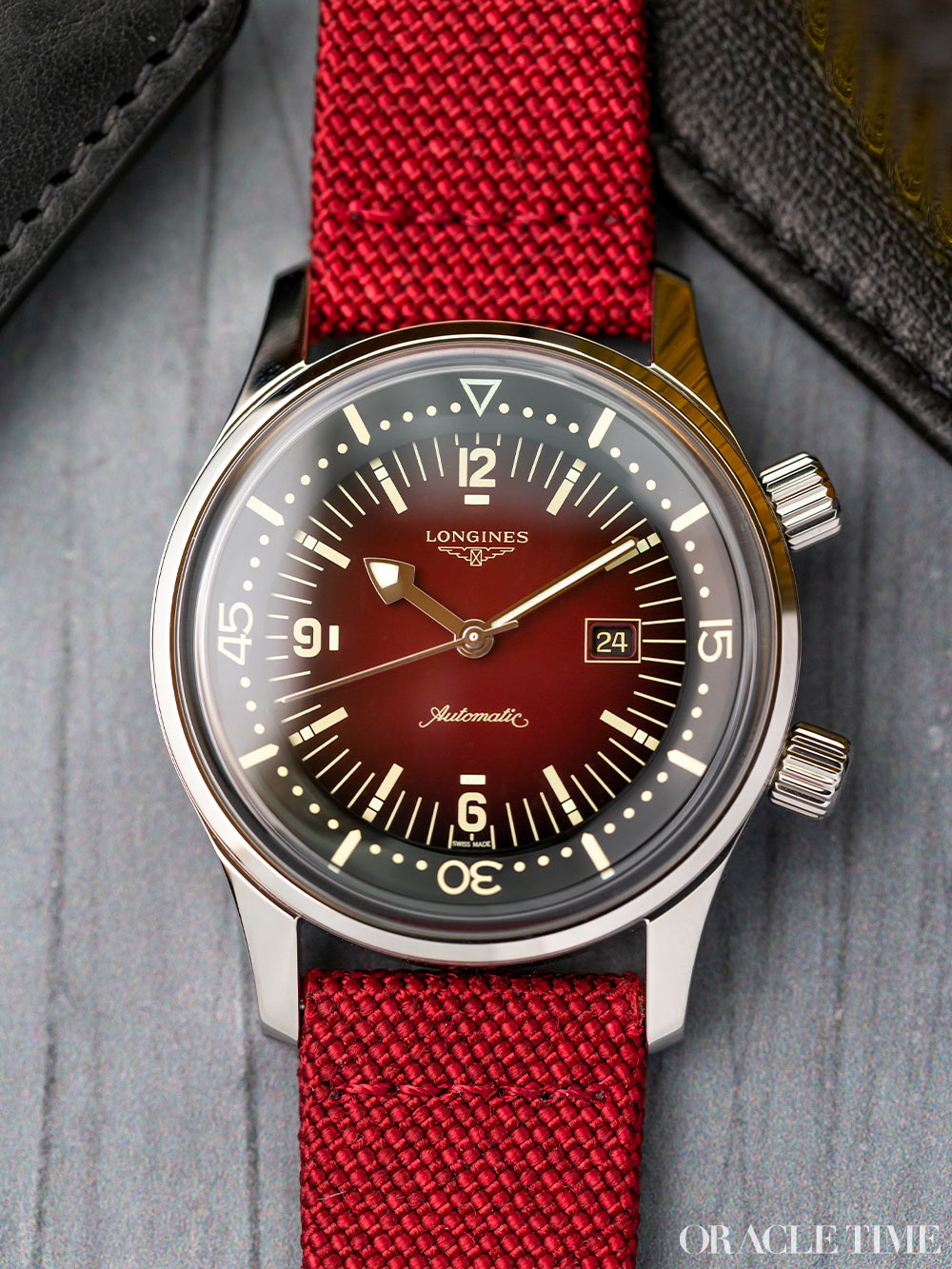 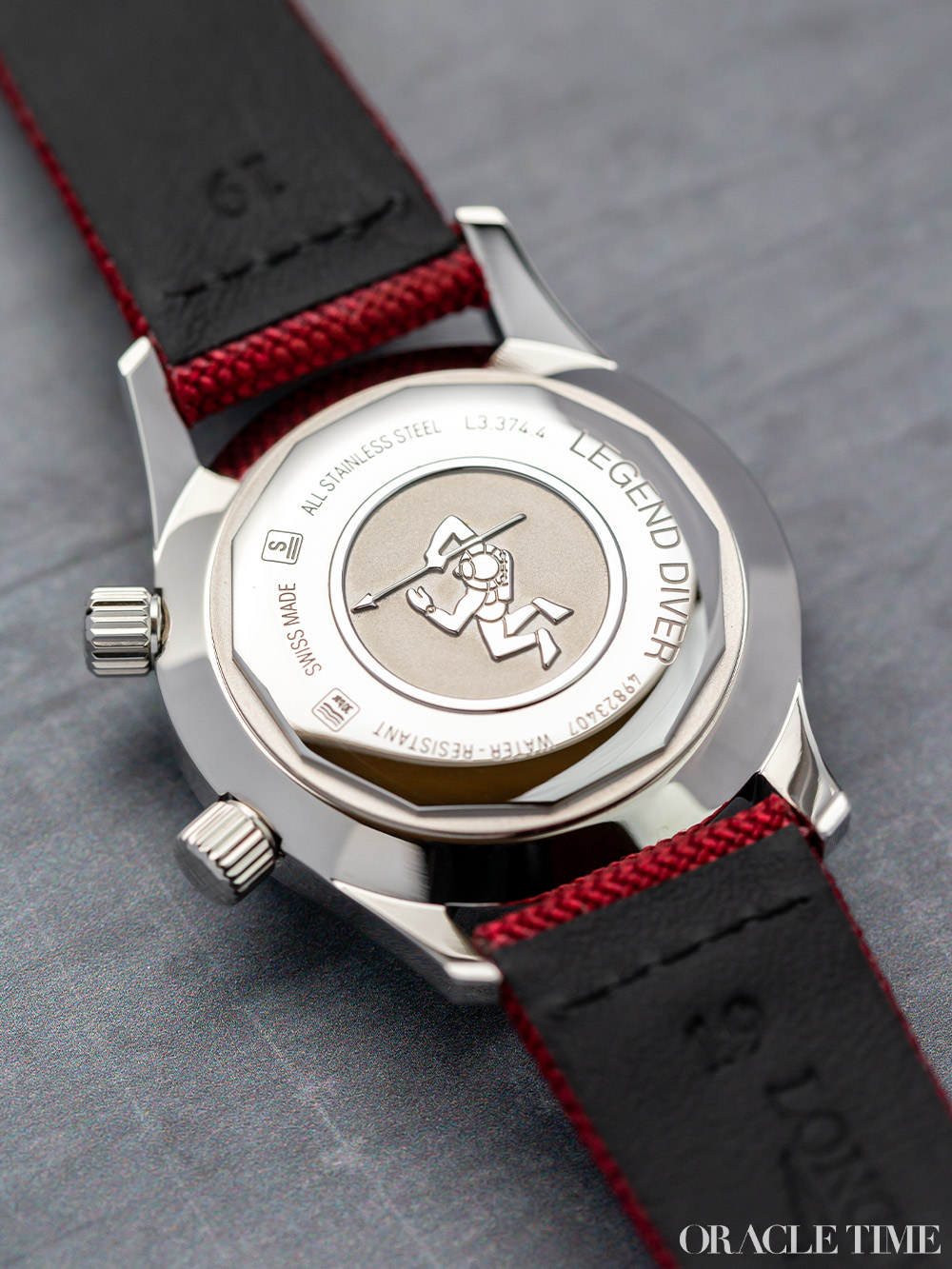 The only real downside I can find to the smaller size is the movement. While the 41mm Legend Divers house the L888.5, the 36mm instead goes for the L592. The difference is that, thanks to less space for a mainspring, the latter offers a 45-hour power reserve instead of the larger 72-hours of the larger size. That’s a substantial difference.

Still, both have the silicon balance springs that are largely ubiquitous in Swatch Group these days, helping them combat magnetism, among the other innate benefits of the wonder springs. Not that you can see said springs; the Legend Diver, thanks to its Super Compressor inspirations, has a solid caseback. At this level of watchmaking, I’d say that’s not just acceptable but expected in a diving watch. 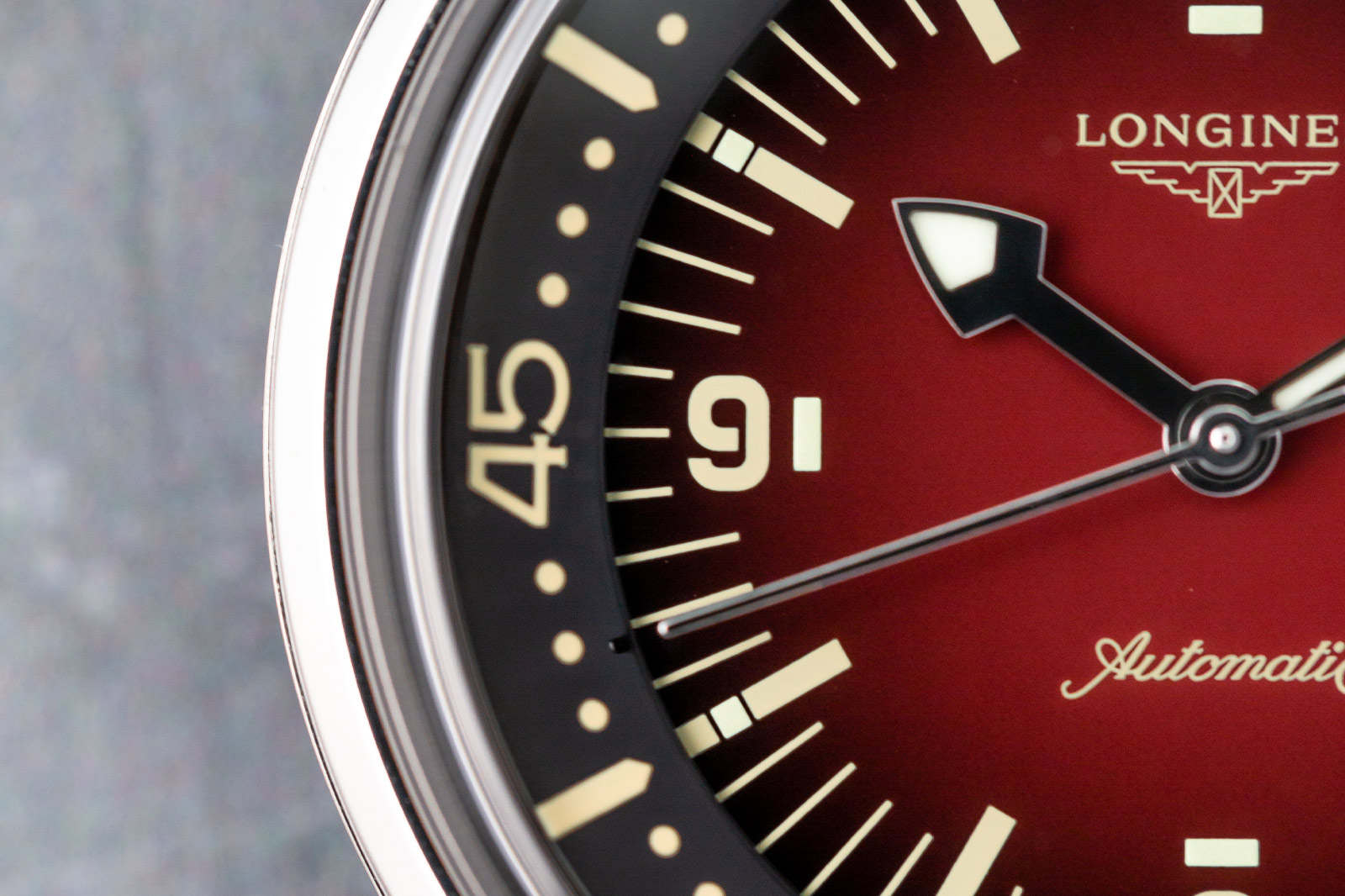 Finally, there’s the price. You might be expecting the 36mm to be a touch cheaper, given its difference in movement and sheer weight of material. But no, all the new pieces are priced the same at £1,960. Sure, I’d like the model I have my eye on to be a bit more affordable than the rest, but I can always appreciate consistency. It means that personal taste more than bank balance comes into which model you go for.

So, would I go for a 36mm diver for £1,960? Honestly, yes. But then I guess the best thing that could be said of my wrists – and recent taste in dial colours – is that they’re gender neutral. Whether this version of the Legend Diver finds a wider audience, time will tell. I hope so.