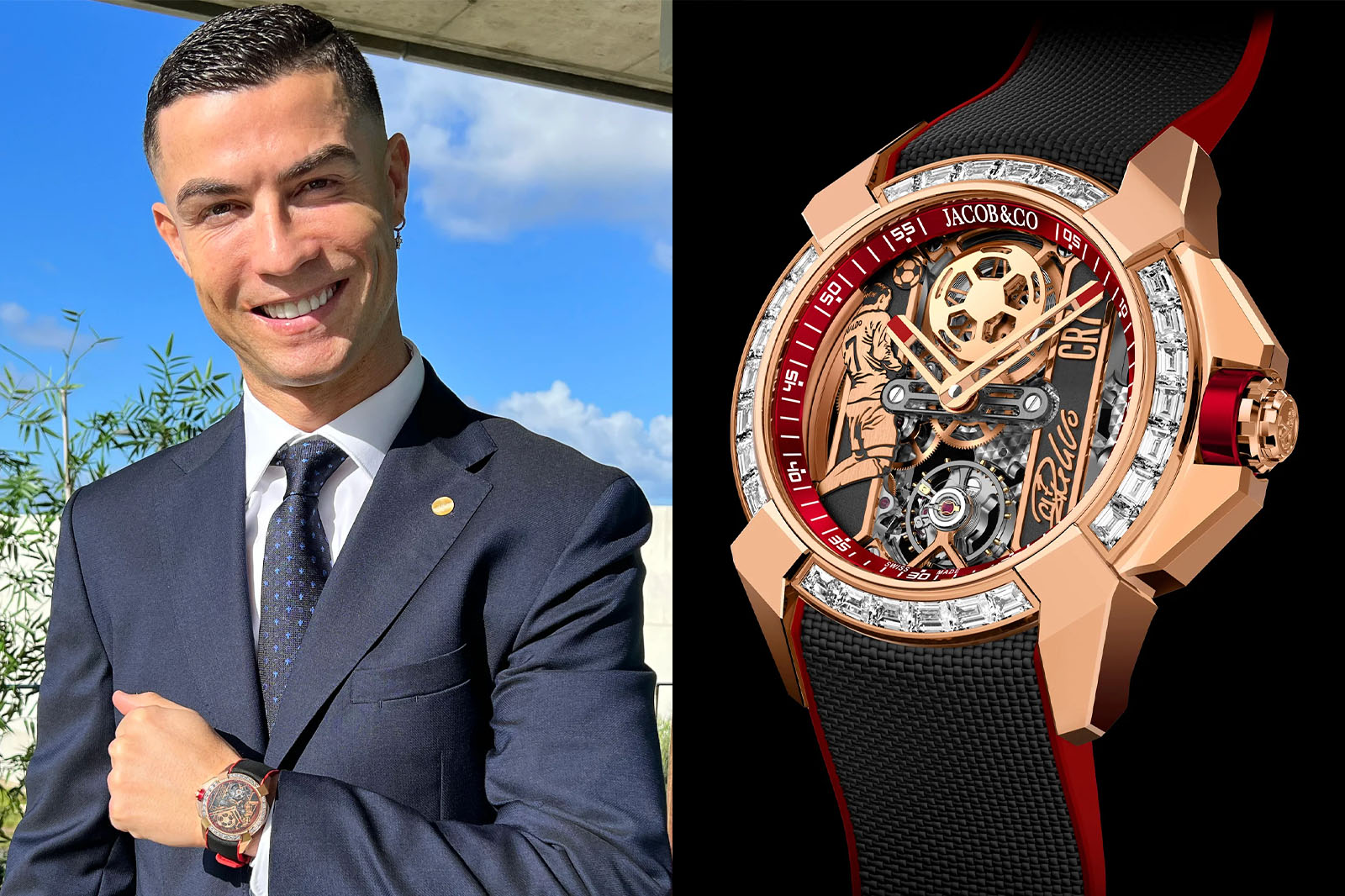 Cristiano Ronaldo can’t seem to avoid making headlines at the moment. Between controversial interviews and his tumultuous relationship with Manchester United, the star striker has whipped up a media storm right at the outset of his World Cup run with Portugal. Fortunately, no publicity is bad publicity and it all comes right as Cristiano Ronaldo has announced a partnership with Jacob & Co. That means the launch of a new pair of watches made in collaboration with his apparel brand CR7: the Flight of CR7 and the Heart of CR7. 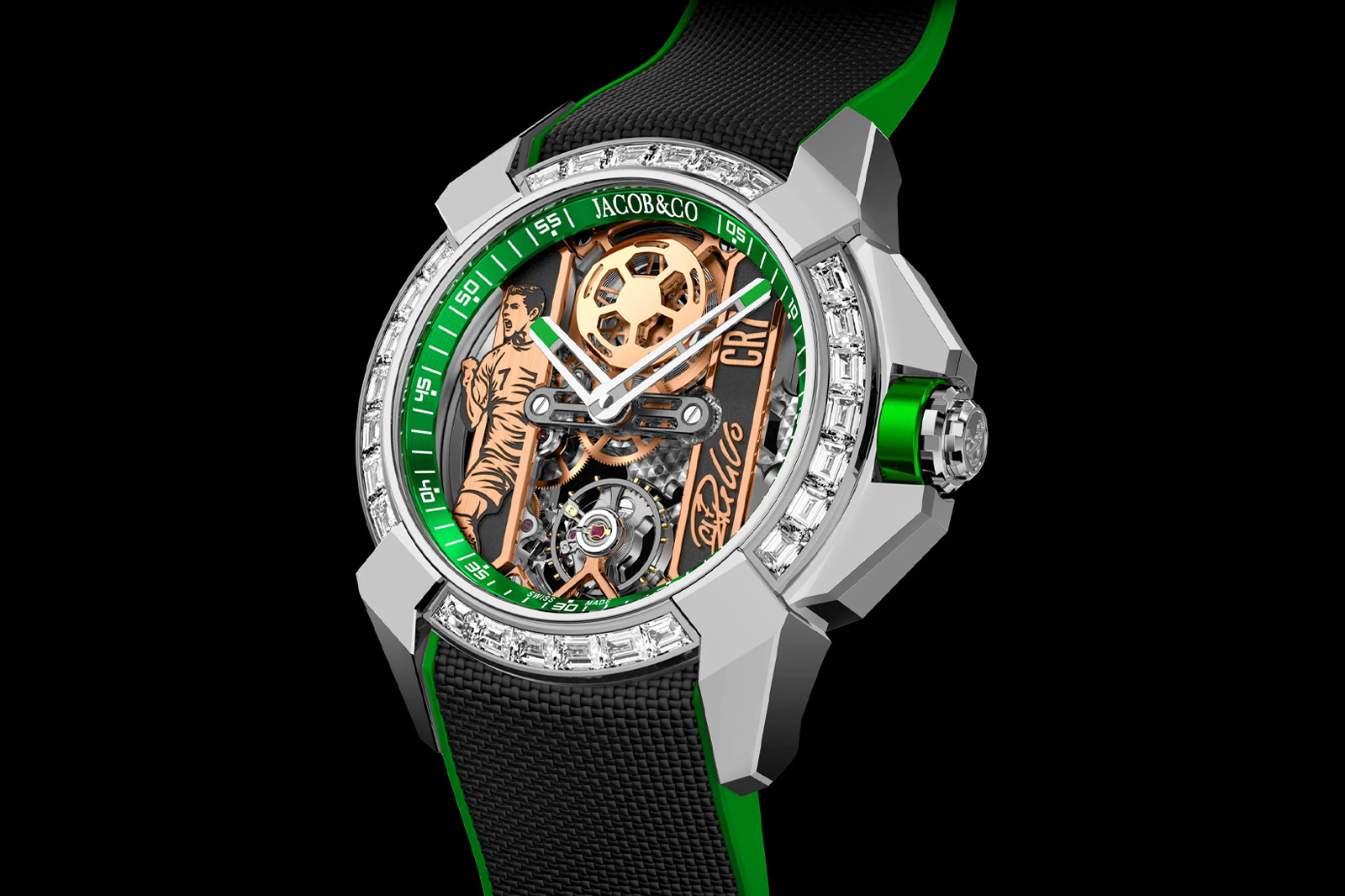 Both watches are the same at their core, with the differences between the two being primarily aesthetic. That means both have 44mm diameter cases in a chunky style with pronounced lugs and a substantial crown guard. However, the Heart of CR7 is made from stainless steel while the Flight of CR7 is 18K rose gold.

Building on the contrasting materials, each has a unique signature colour. The warmth of the rose gold model is matched by strong red accents on its crown, flange and strap, representing the home colours of Manchester United, Ronaldo’s (former) team where earned his legacy as one of the greatest players of all time. The cool tones of the steel model are matched to accents in football pitch green. 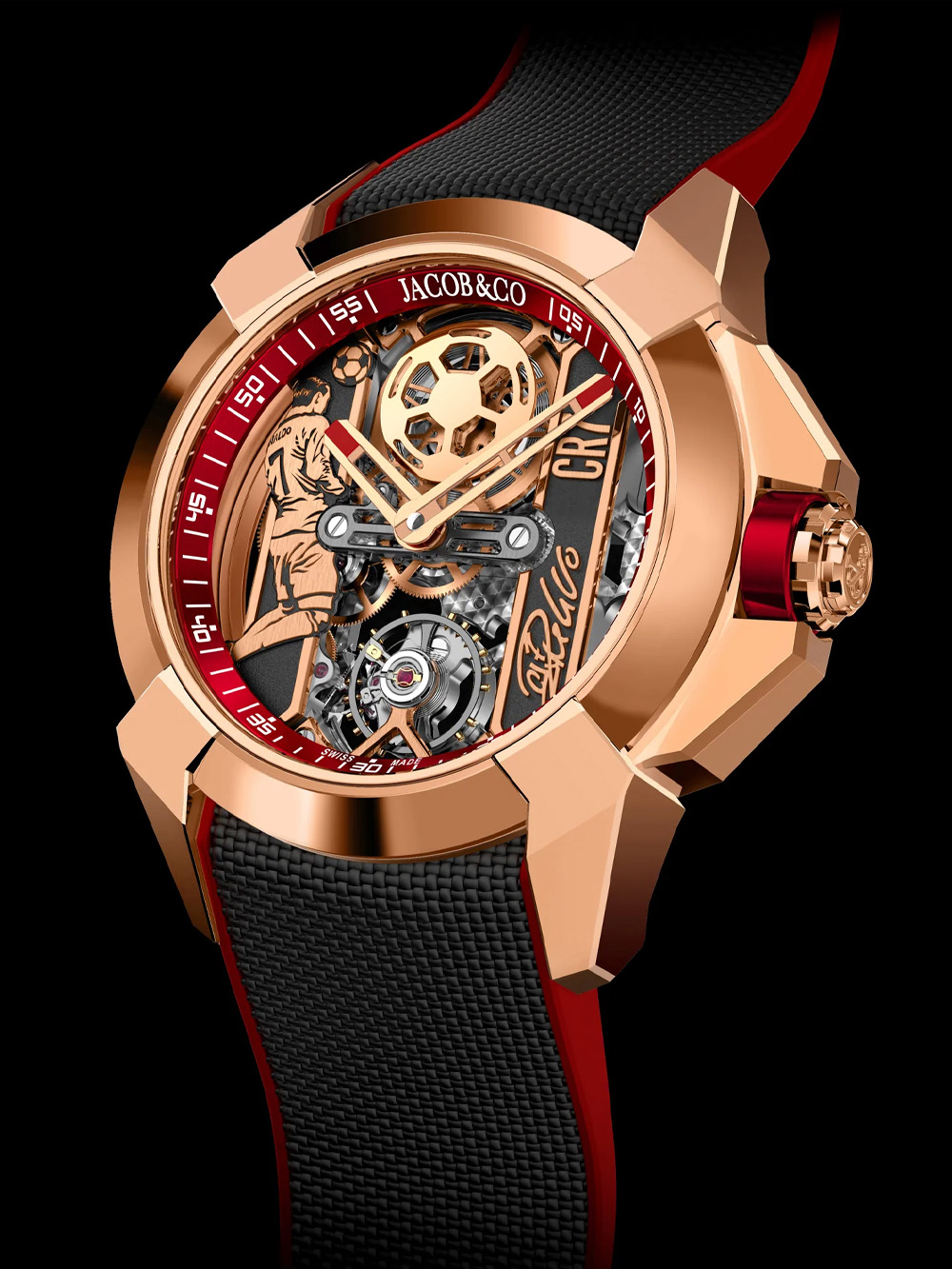 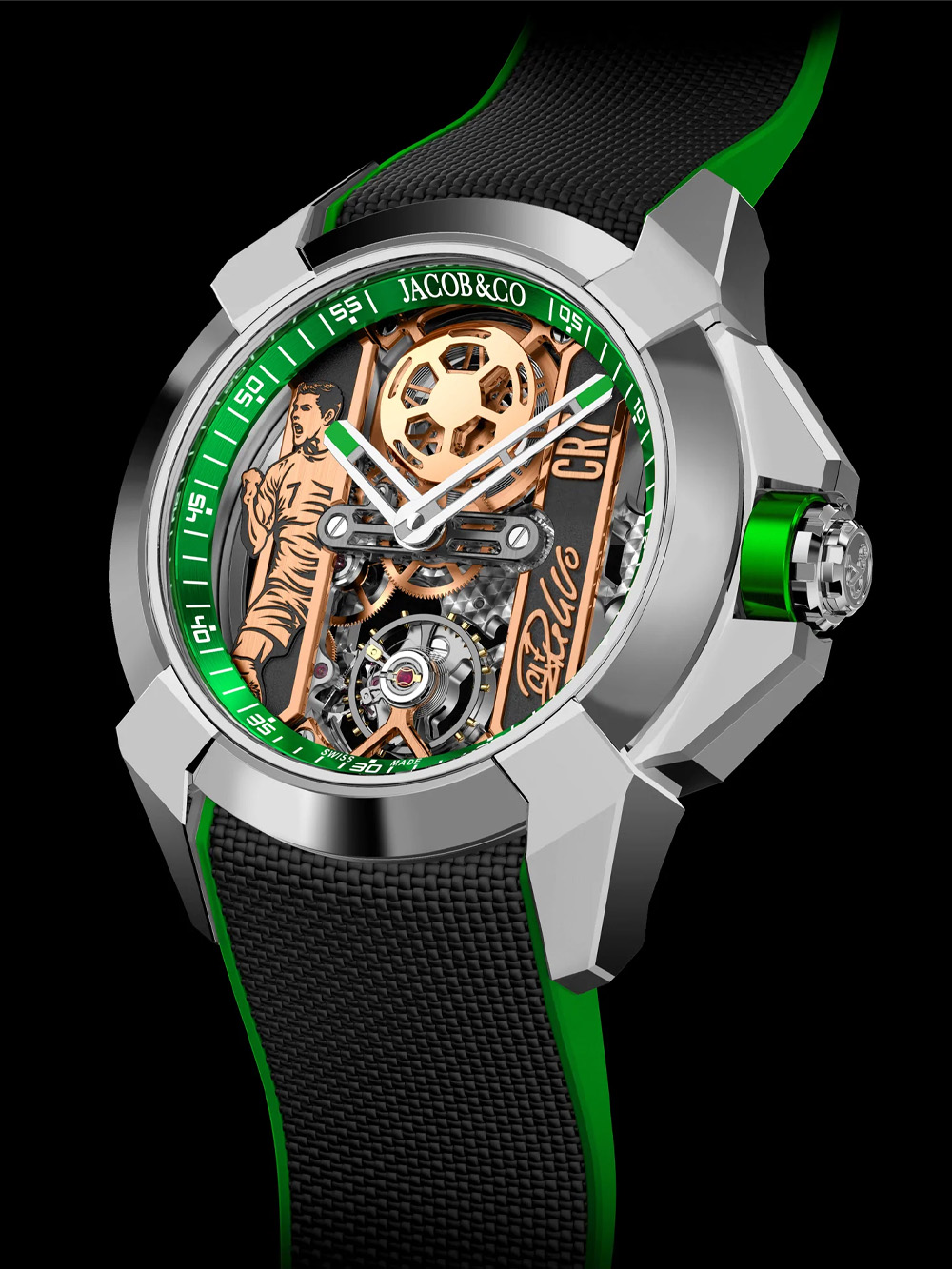 The last thing to add about the cases is that both editions are available with an optional diamond embedded bezel. The gem-set bezel consists of 26 baguette cut white diamonds arranged in sets of six or seven between the lugs. It’s as flashy as Ronaldo’s plays.

Speaking of which, some of his iconic moves and celebrations are depicted across the dial and caseback of both models. The Jacob & Co. x Cristiano Ronaldo limited editions are skeletonised with two large bridges running vertically across its length. The right-hand bridge on both versions features the CR7 logo and Ronaldo’s signature while on the left is an engraved depiction of the man himself. The Flight of CR7 shows him mid-flight as he headers the football while Heart of CR7 has him fist pumping in celebration, both taken from iconic pictures of him. 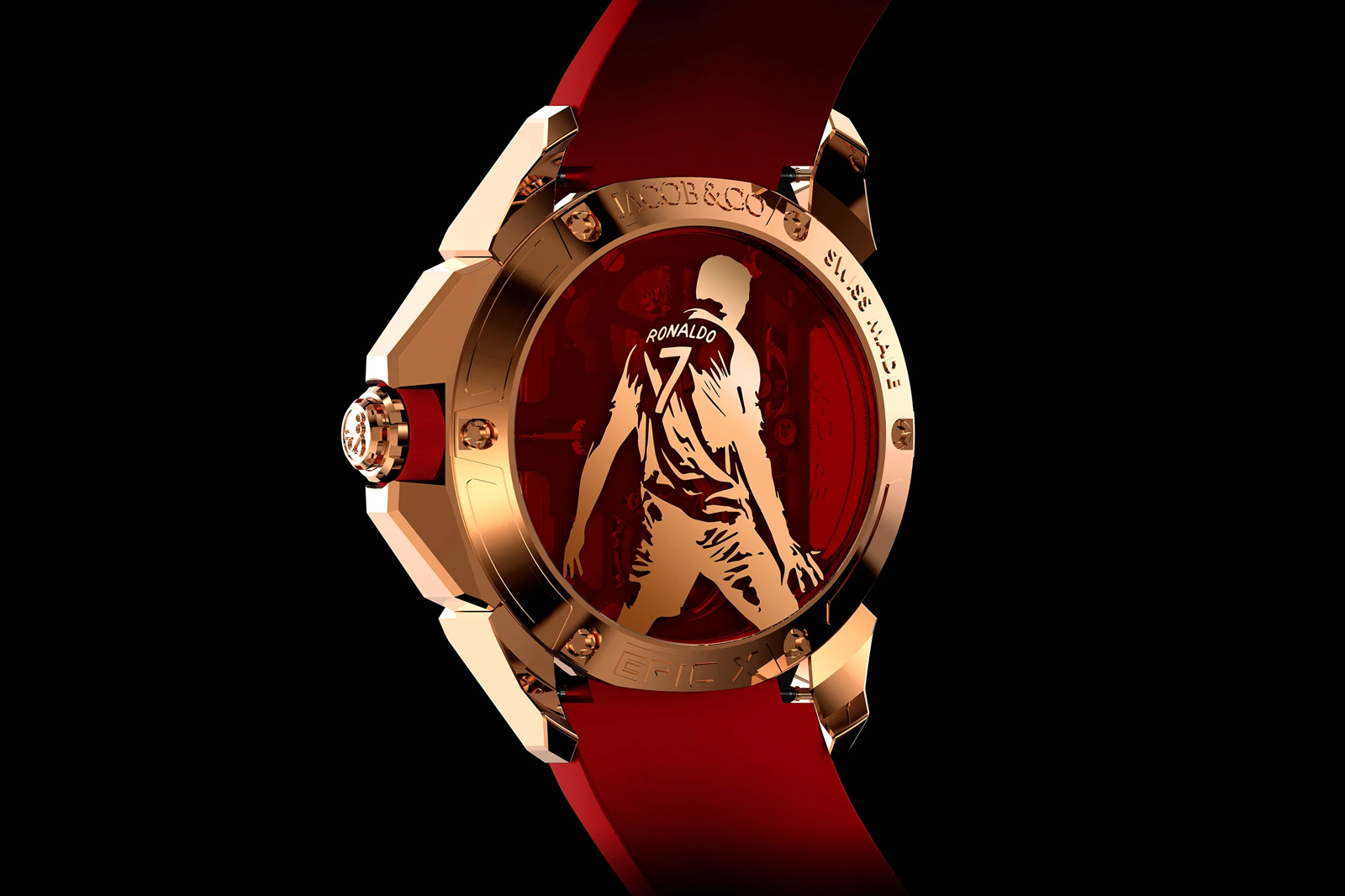 The casebacks have the same engraved image over a tinted sapphire exhibition window: Ronaldo doing his signature Siu celebration. You know the one. If you peer around the edge of his silhouette you can make out the Calibre JCAM45, a manual wind, skeleton movement with a 48-hour power reserve. If you take a look at it from the dial side you can see the balance at 6 o’clock and the barrel at 12, although for the CR7 editions the barrel is hidden by a football motif.

You have to be a dedicated Ronaldo fan to drop £20,000 – £120,000 on a watch with his brand on it. However, considering that Jacob & Co. have had success with a Messi themed chronograph in the past, there’s little doubt collectors will bite.