You’ve probably never heard of Ålesund. Don’t worry, there’s not a huge amount to know. It’s not the largest, most populous or most important town in Norway. It’s pretty enough but not exactly Portofino. However, it does have two things going for it, the first being an intriguing place in nautical history thanks to Norwegian sailor Ole Brude.

The story goes that in 1904, the 24-year-old set sail like the Vikings of old to cross from Ålesund to Boston. Rather than a longship, his vessel was a self-designed, 18-foot lifeboat somewhat akin to a floating egg. He wanted to show that closed lifeboats were the future. They were; just not until the 70s.

Still, the ship – dubbed Uræd, Norwegian for ‘Fearless’ – crossed through storms all the way to the US coast, earning Brude an audience with President Roosevelt for his achievement – which brings us nicely to Ålesund’s second global export, Von Doren.

Founded in 2016, Von Doren is a watch manufacturer in the middle of its own epic journey and founder Øyvind VonDoren Asbjørnsen found inspiration for the brand’s latest leg in Brude’s story. You see, Von Doren is in the midst of a transition. Like many a startup it began in the accessible, creating well-designed, Swiss-made watches at a very affordable price. Now it’s upping the ante with what promises to be the watch that makes its name.

The name for the piece? Uræd, of course. Uræd is a very different animal from Von Doren’s previous piece. That’s not to put those down of course; they were handsome enough. But the new piece has all the specs of a serious Swiss watch and a design inspired by Brude’s journey into becoming a true nautical instrument.

Despite having its design roots in the early 1900s, the Uræd is slightly different from the host of other ‘retro’ watches that have come out recently. For one, it has plenty of Art Nouveau influences, courtesy of Ålesund (which is, coincidentally, the Von Doren founder’s hometown).

The rounded, bi-directional sapphire bezel is wonderfully tactile, while the big day indicator at 12 o’clock matches the grooved outer ring to the dial flawlessly. It’s understated, nuanced and incredibly handsome in green. It’s fine in the blue and black too, but that ocean green is simply stunning.

This being a step up for Von Doren it almost goes without saying that the new piece will have a significantly improved movement. The one in question is the STP 4-13 with a 44-hour power reserve. The Swiss-made day-date movement is reliable, accessible and does everything you care to ask of it.

While you can’t always tell what to expect from a Kickstarter campaign, we’re looking forward to getting the Uræd on our wrists – and we’re not the only ones. When it launched on Kickstarter Von Doren had a goal of just over $21,000 to get some prototypes built. The total is currently sitting at well over $600,000. That’s a lot of faith.

Find out more about Uræd at Von Doren. If you want to back the project yourself, you can find it on Kickstarter. The Best Adventure Watches of 2020 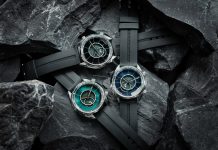