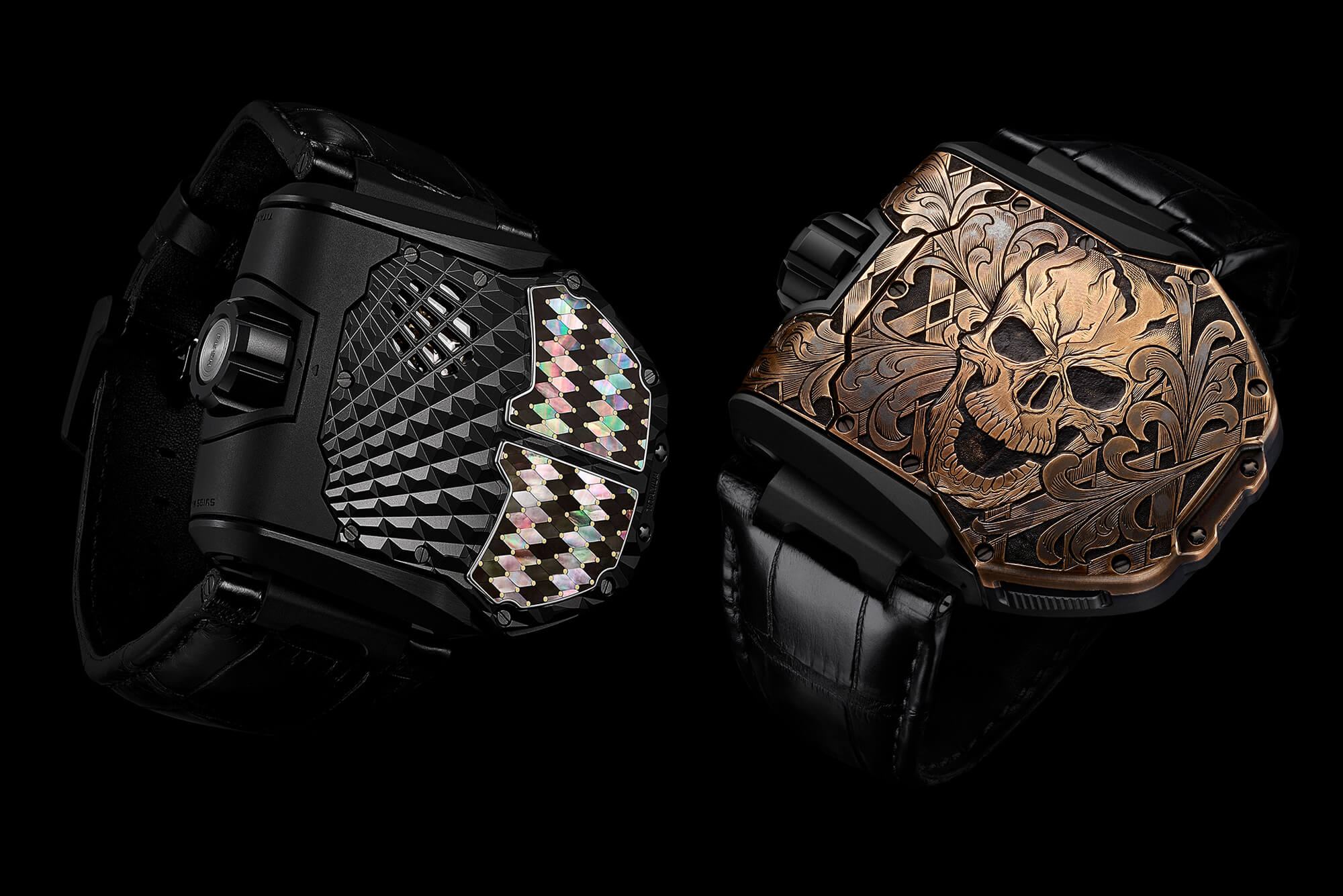 Urwerk are unmistakable. Even amongst the more unusual, off-kilter watchmakers they stand apart. Between big, bold cases in designs more suited to Batman and mechanics that prefers the path less trodden, there’s no-one else quite like them. A good part of that reputation is thanks to their contemporary flagship, the UR-T8, enough that when Urwerk releases a new edition of the watch, we pay attention. This time, they’ve released two.

Based of the UR-T8 as they are, both the new pieces incorporate the intricate carousel indicator system that put Urwerk on the map. Rather than hands or a digital display, the time is told on a series of satellites that rotate on their own axis as they also rotate around the dial. It’s an intensely complex system but it’s impressive to match. 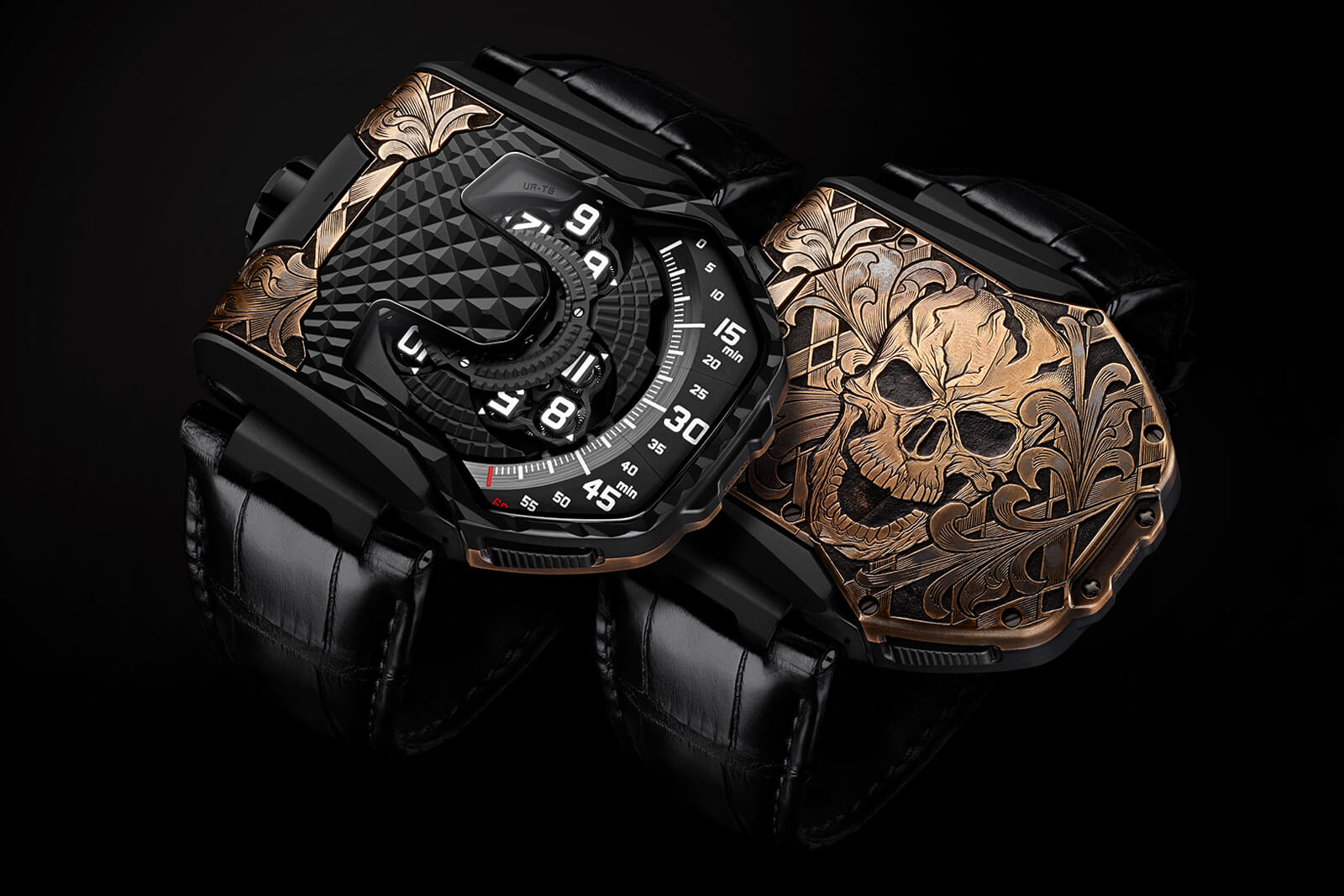 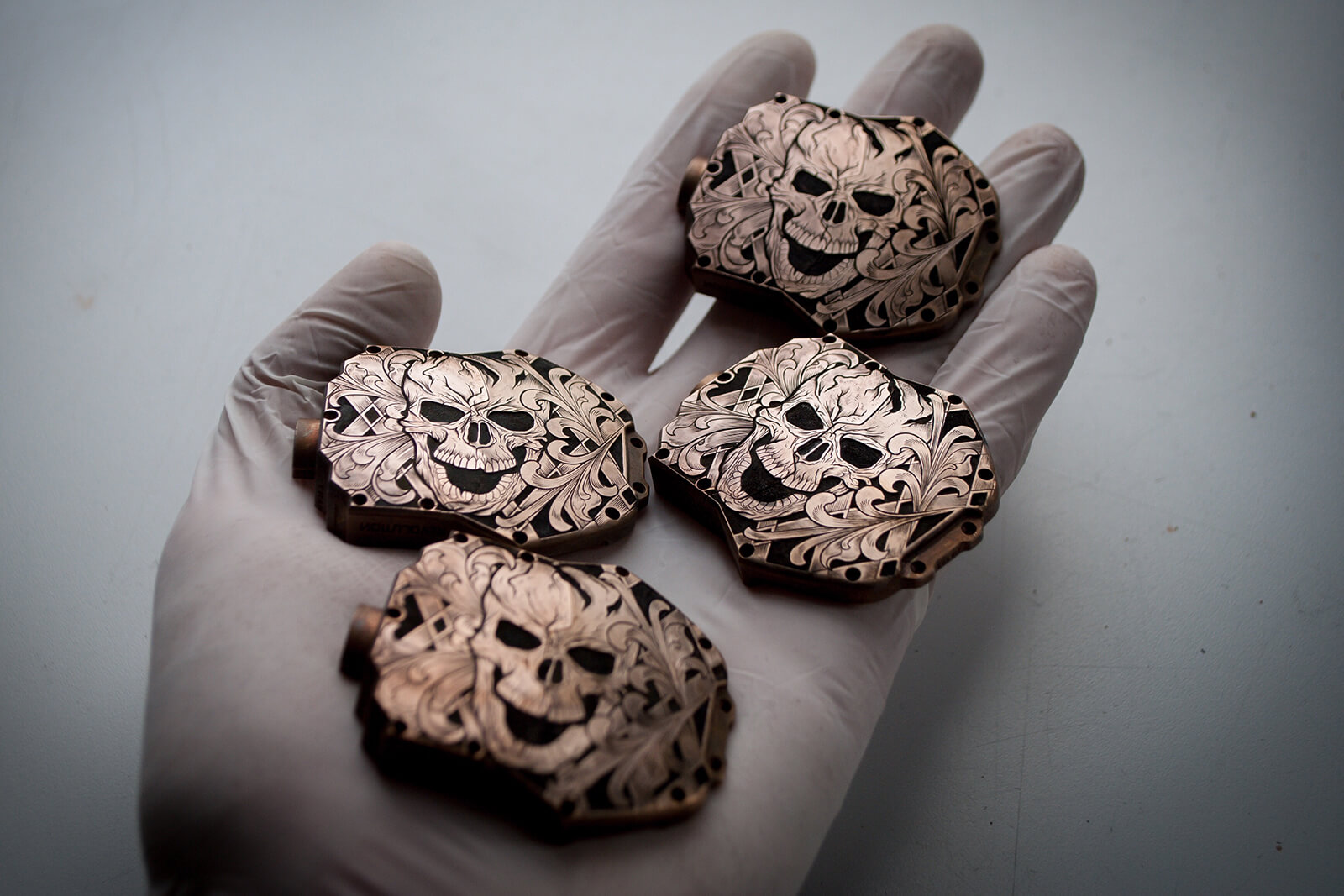 The Skull shows off plenty of fine engraving. On the top side you get much the same as ever with the heavily machined DLC black case; flip it over however and you’re presented with the kind of skull that would do Iron Maiden proud in a combination of titanium and bronze. Don’t worry about it being a bit loud though; on the dial side there’s just a hint of bronze at the crown end of the watch, just enough for a little added design flair. 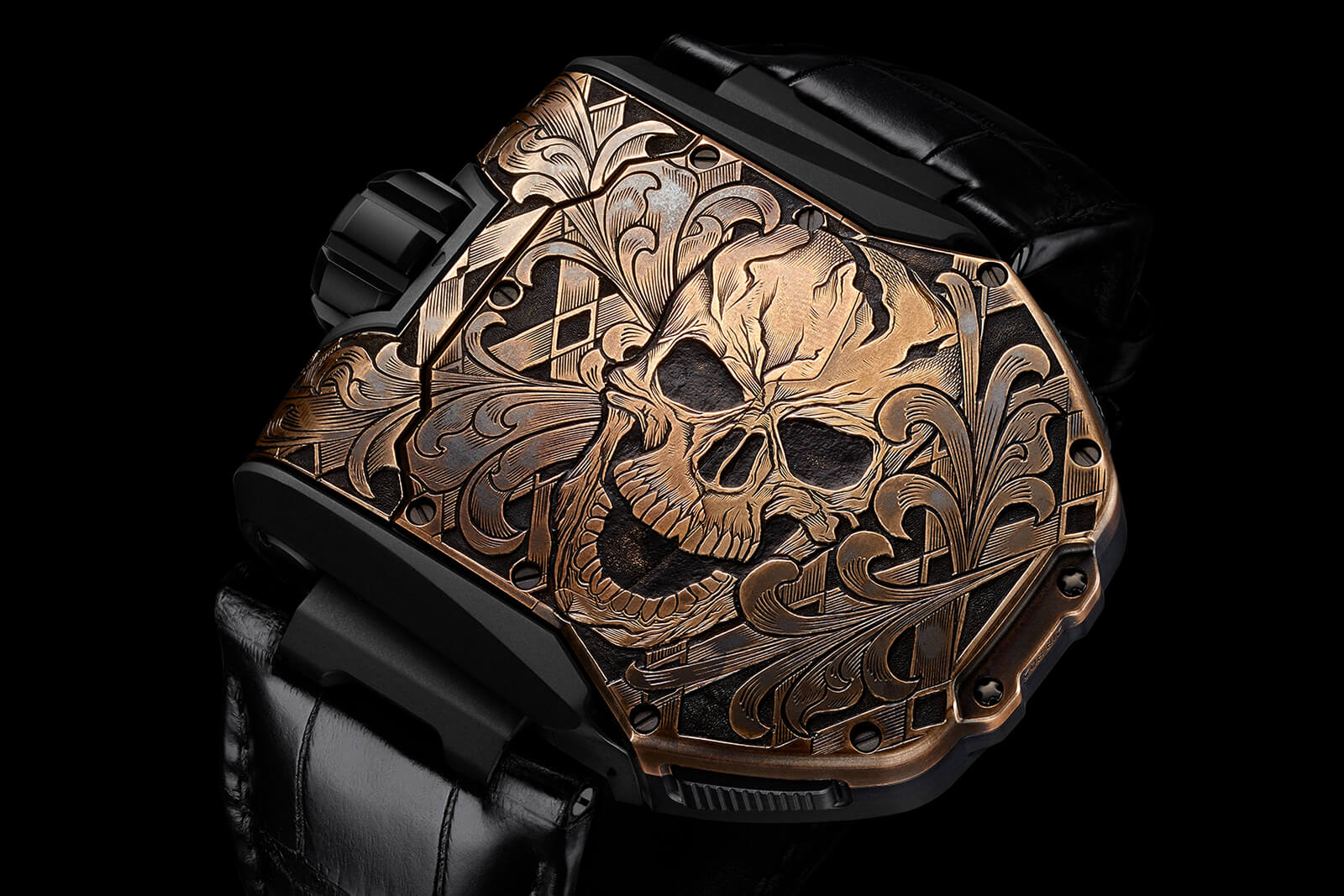 The design makes use of a part of the watch that would normally get ignored and, while there’s something of Jaeger-LeCoultre’s famous Reverso in the flipping mechanism, they’re polar opposites in stylistic terms. 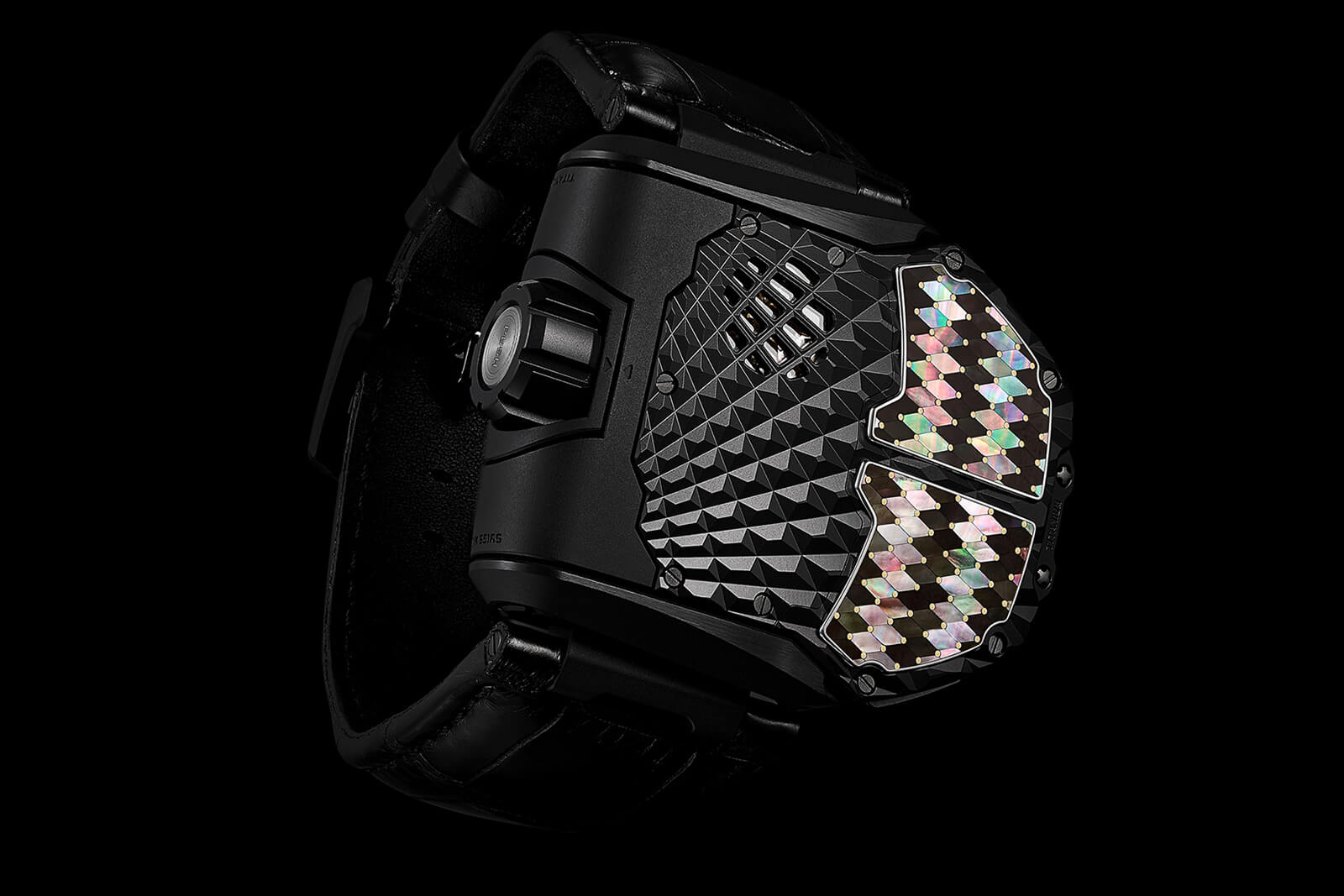 Just as outlandish – albeit a little less metal – is the Colibri. It has to be said that this particular piece isn’t all Urwerk. In fact, it’s been created in collaboration with Emmanuel Esposito, a knifemaker whose production makes Urwerk seem like General Motors. Calling what he creates knives seems a little insulting; they’re works of art. In the Colibri, Esposito has applied the decorative arts used in his rather specialised form of smithing to the UR-T8. 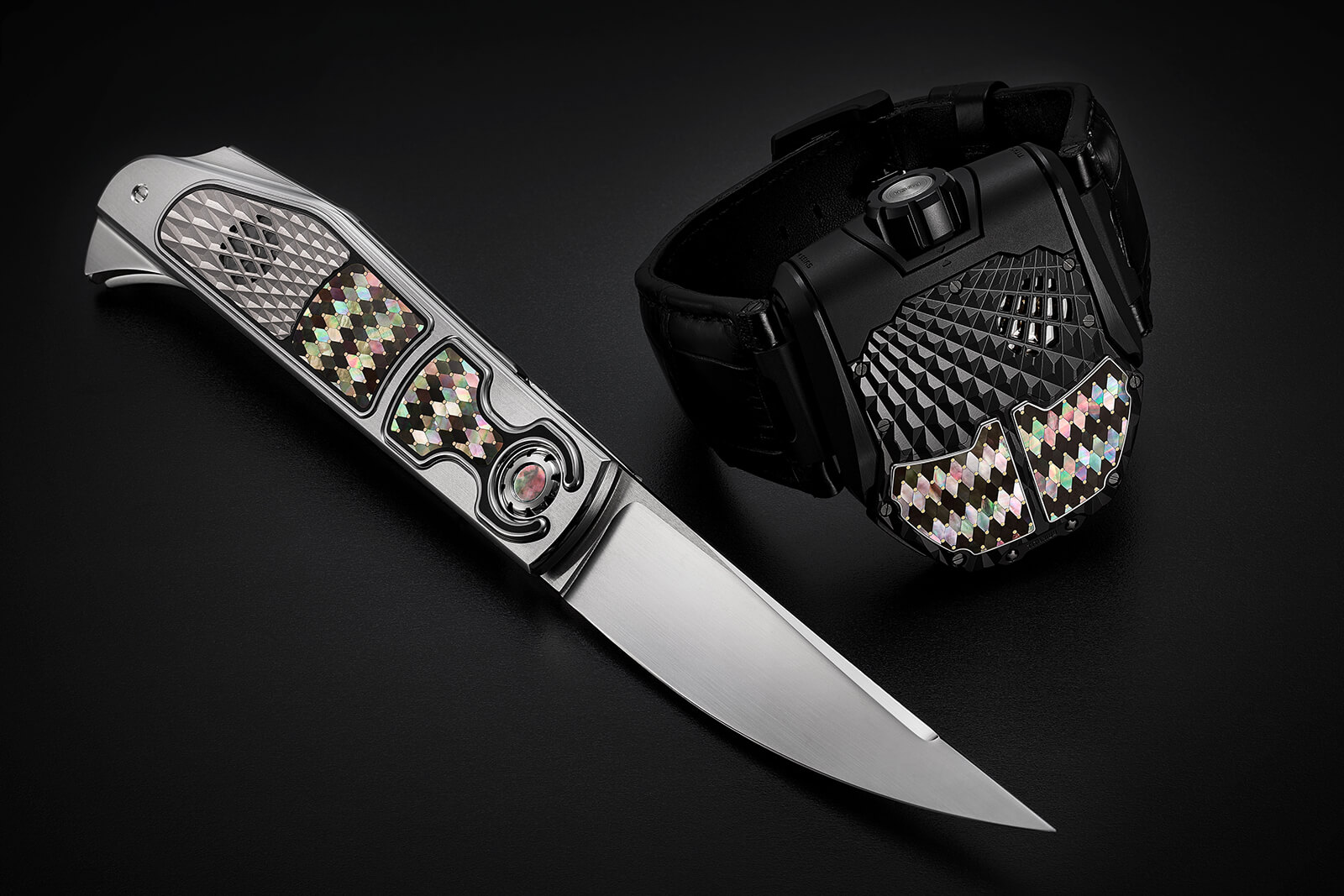 Rather than a skull, flip over the Colibri to reveal a shimmering Argyle criss-cross of inlaid black-lip mother-of-pearl pieces. Each piece has been individually picked and set into the titanium case with 18kt gold pins. Put simply, it’s magnificent and possibly the most masculine use of pearl we’ve ever seen. Oh and it’s paired with an equally exquisite knife. Because of course it is. 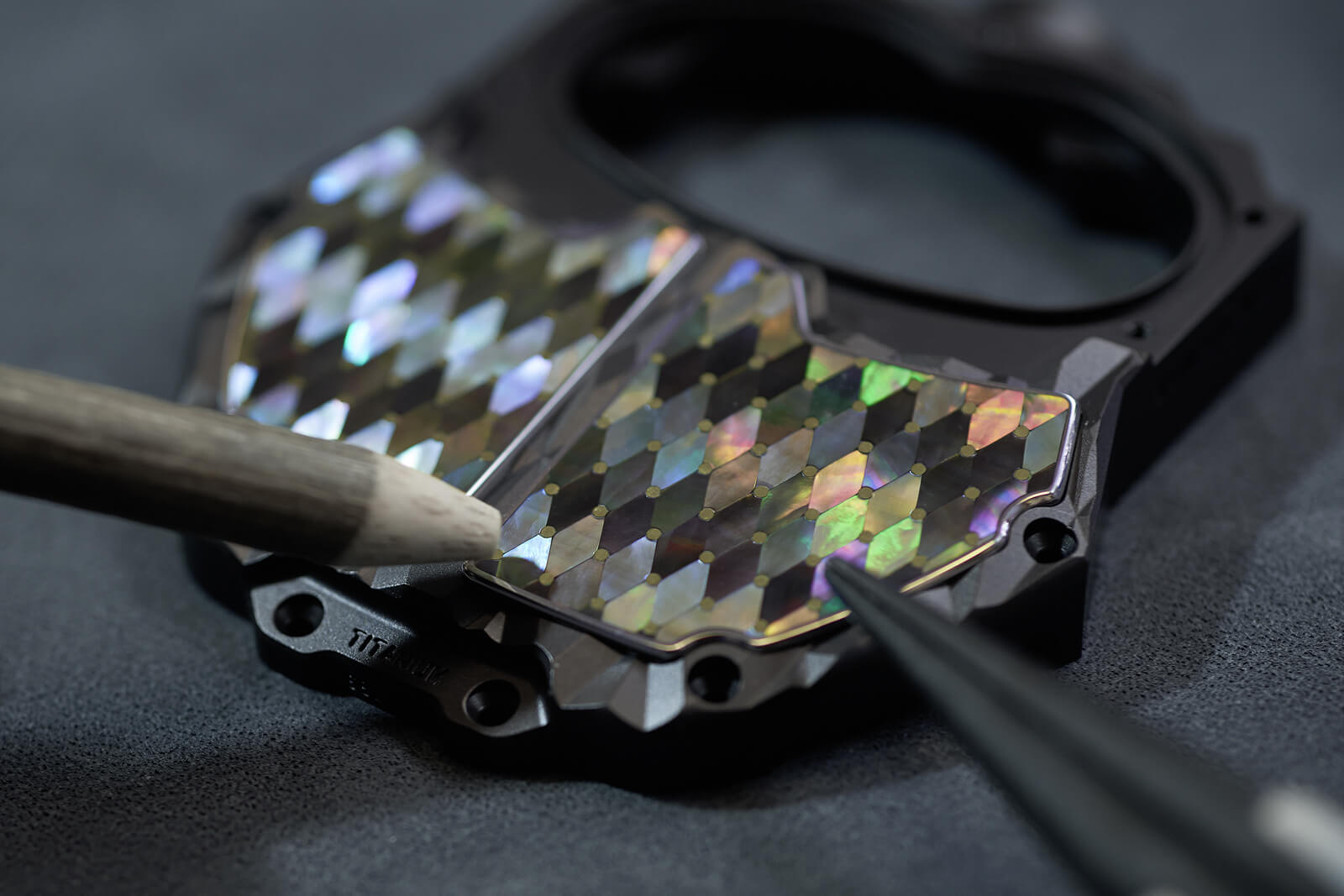 Unfortunately, if this has whetted your appetite for a pearl-inlaid UR-T8, this is a unique piece. Sure, if you ask Urwerk nicely enough they can probably help you out, but this is more a showpiece than a genuine addition to the collection. Still, it’s not just showy; it’s magnificent. Here’s hoping we see plenty more to come.