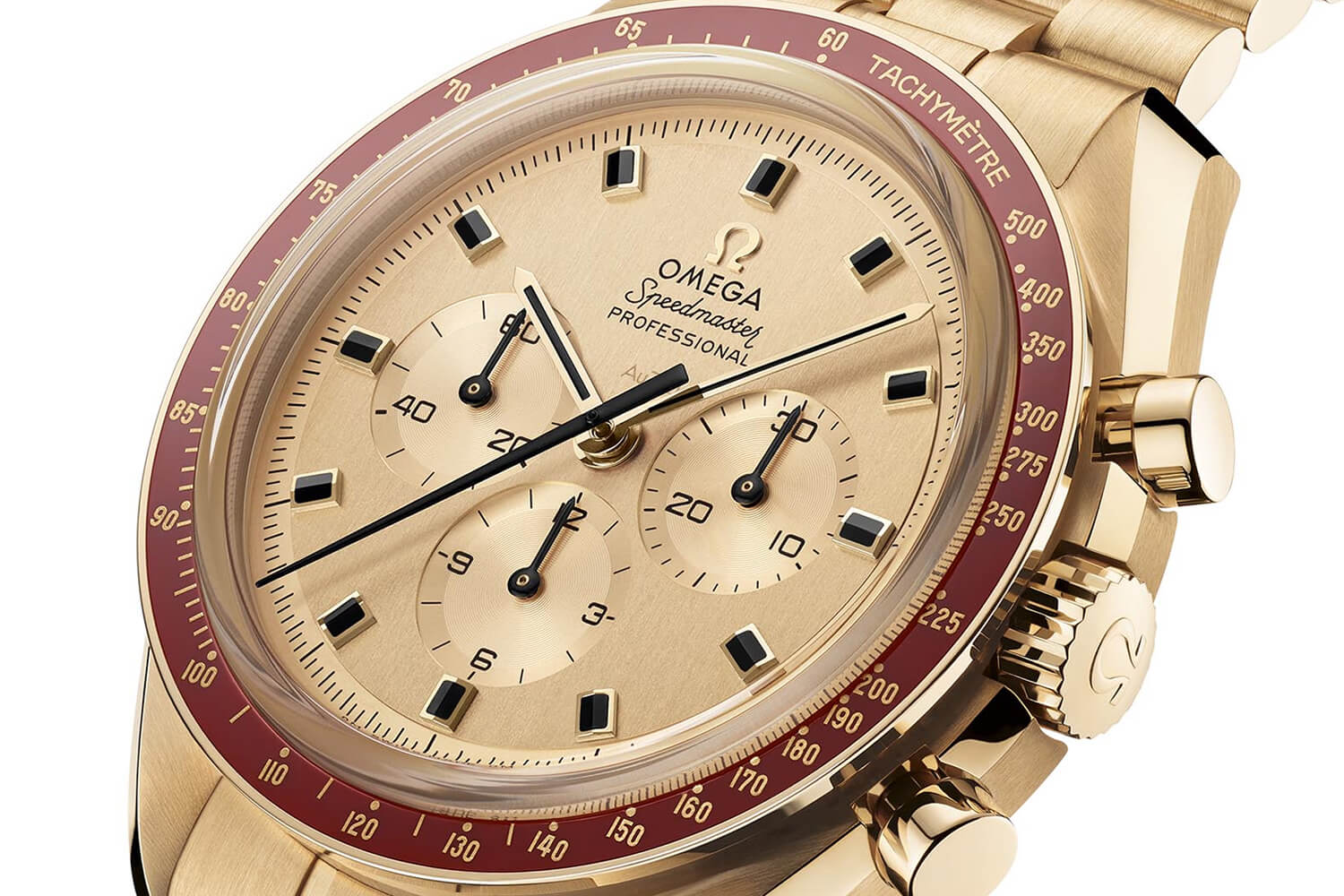 It’s been 50 years since Neil Armstrong uttered the immortal words, “One small step for man, one giant leap for mankind” and while we might no longer be landing on the moon, the implications of that landing have been with us ever since. That’s doubly true when it comes to one of the most famous watches in – and out of – the world: The Omega Speedmaster.

Armstrong may have been first out onto the lunar surface, but close behind was the legendary Buzz Aldrin and on his wrist in turn was the Speedmaster Professional, the NASA-approved Moonwatch. 50 years on and the watch has seen plenty of different iterations. Some might say too many. Still, it’s remained a true horological icon, one deserving of a little pomp and ceremony. Omega evidently agree; say hello to the Speedmaster Apollo 11 50th Anniversary Limited Edition. 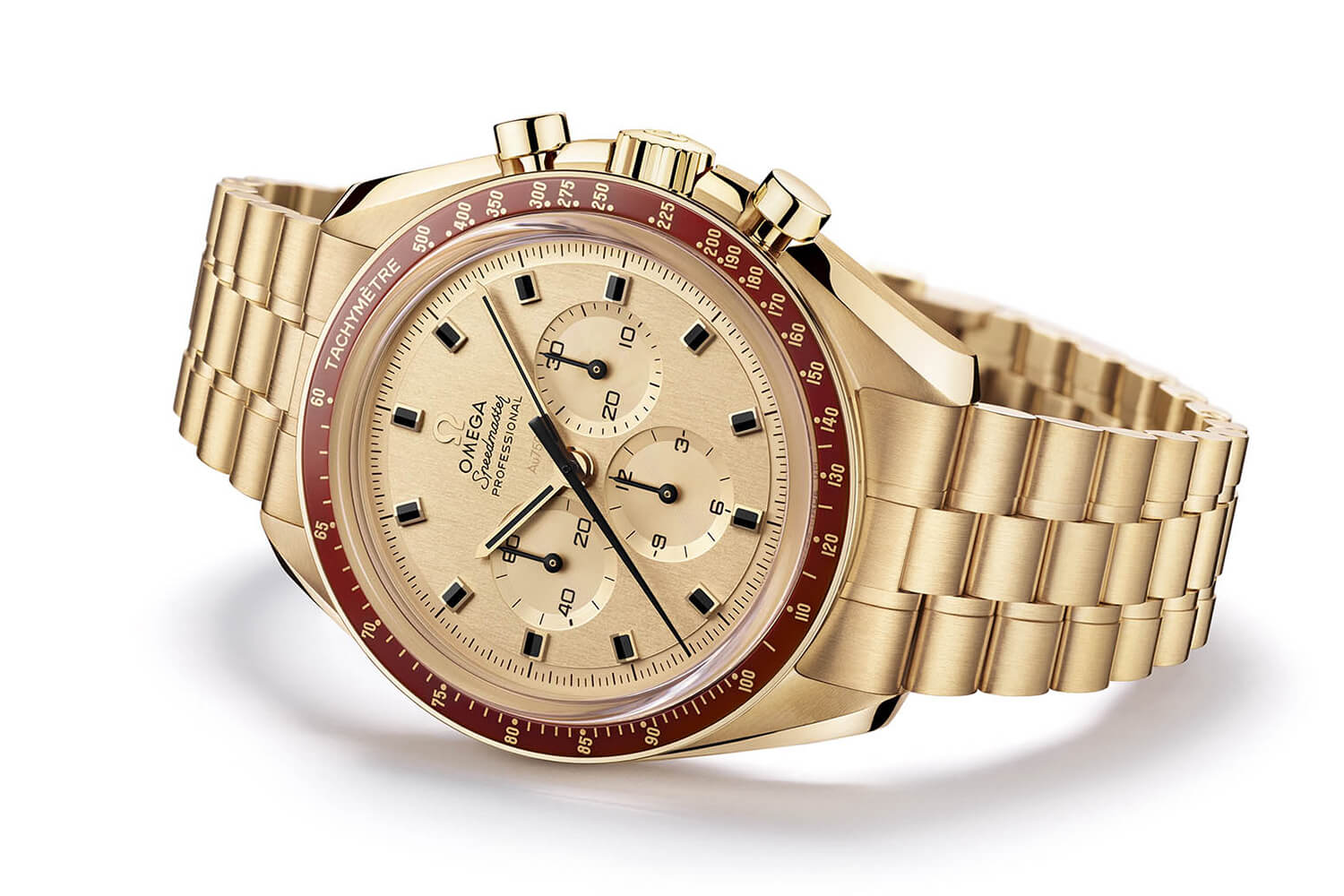 This watch won’t exactly come as a surprise; it’s a milestone that Omega were never going to let go quietly into the night. Fortunately, despite all that expectation, it doesn’t disappoint.

As this is the golden anniversary, the new Speedmaster has been rendered in full gold, from the case to the bracelet to the dial. However, the precious metal is there for more than just a tenuous jubilee link; it’s a reference to the very timepieces gifted to the members of the Apollo 11 mission by President Richard Nixon when they returned to Earth. It was, to all intents and purposes, Omega’s first limited edition – and now it’s come back around. 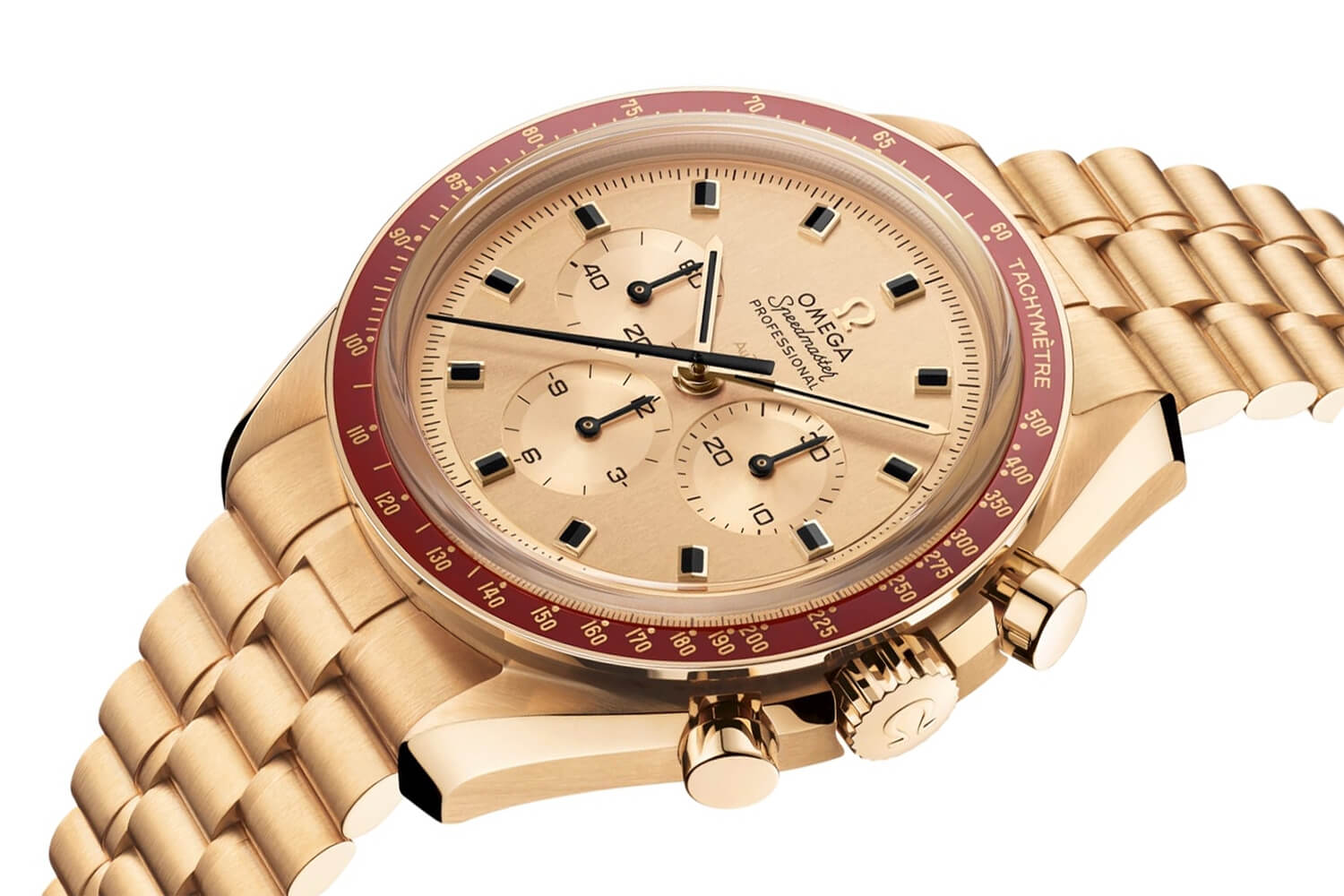 The new watch is incredibly faithful to the original, albeit with a few modern enhancements. For one, the yellow gold has been swapped for Omega’s proprietary Moonshine gold, a whiter, brighter precious alloy. For another, the cool burgundy bezel has been switching from anodized aluminium to hard-wearing ceramic. It looks similar, but it’s far more practical. 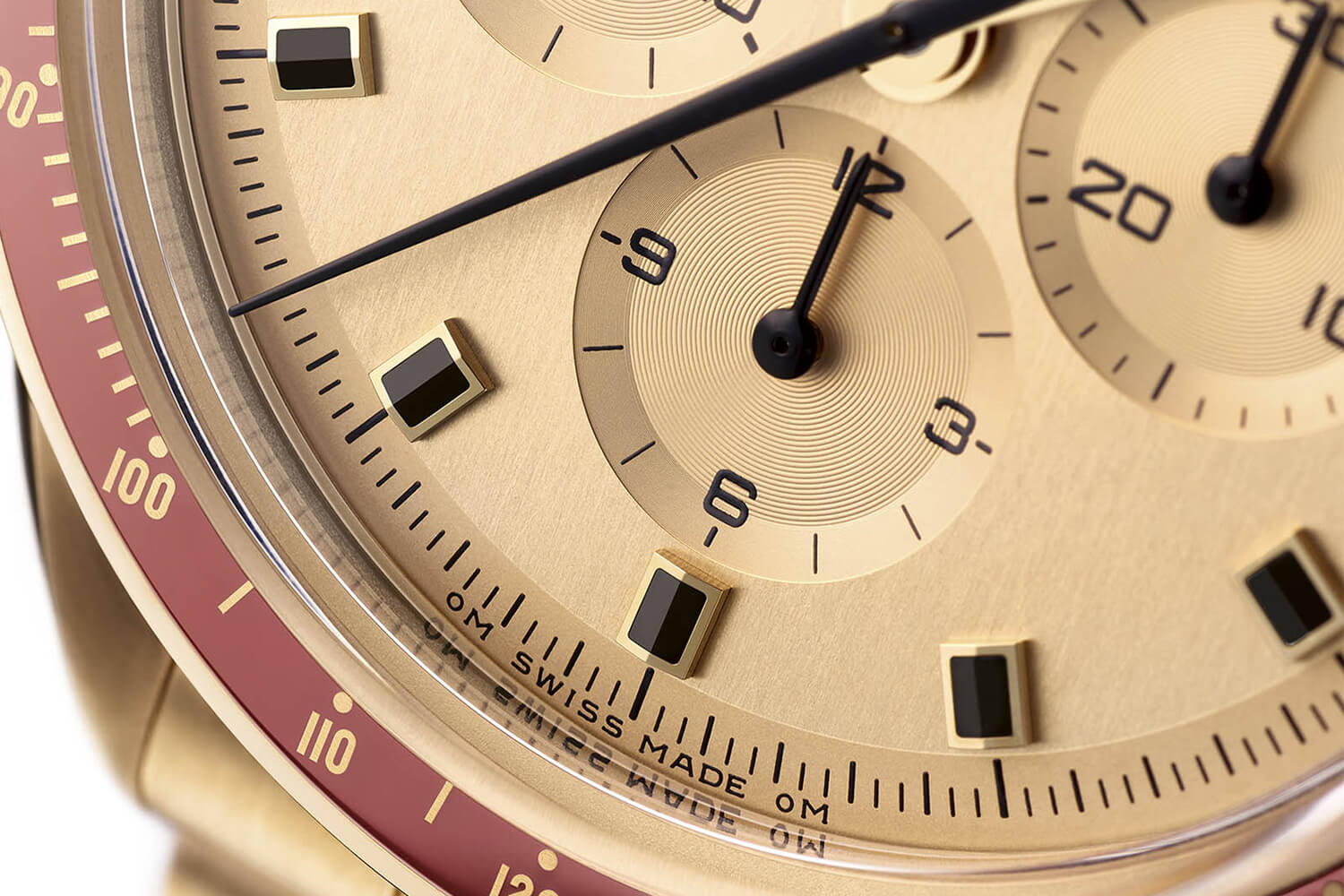 In fact, stylistically, it’s the spitting image of that fist ever Omega limited edition. Put them side-by-side and you’d be hard-pressed to tell which is which without some close scrutiny. Unless you flip it over that is. Because where Omega has advanced more than anywhere else in the past 50 years is in their movements, and in the Apollo 11 50th Anniversary piece it’s on full display.

The master chronometer-certified calibre 3861 is a descendent of the calibre 861 that originally went to space, but in the same way we’re all descended from hairy cave-dwellers. It’s still manual-wind, but has George Daniels’ patented Co-Axial escapement, a silicon Si14 balance spring and Moonshine gold-plated bridges. 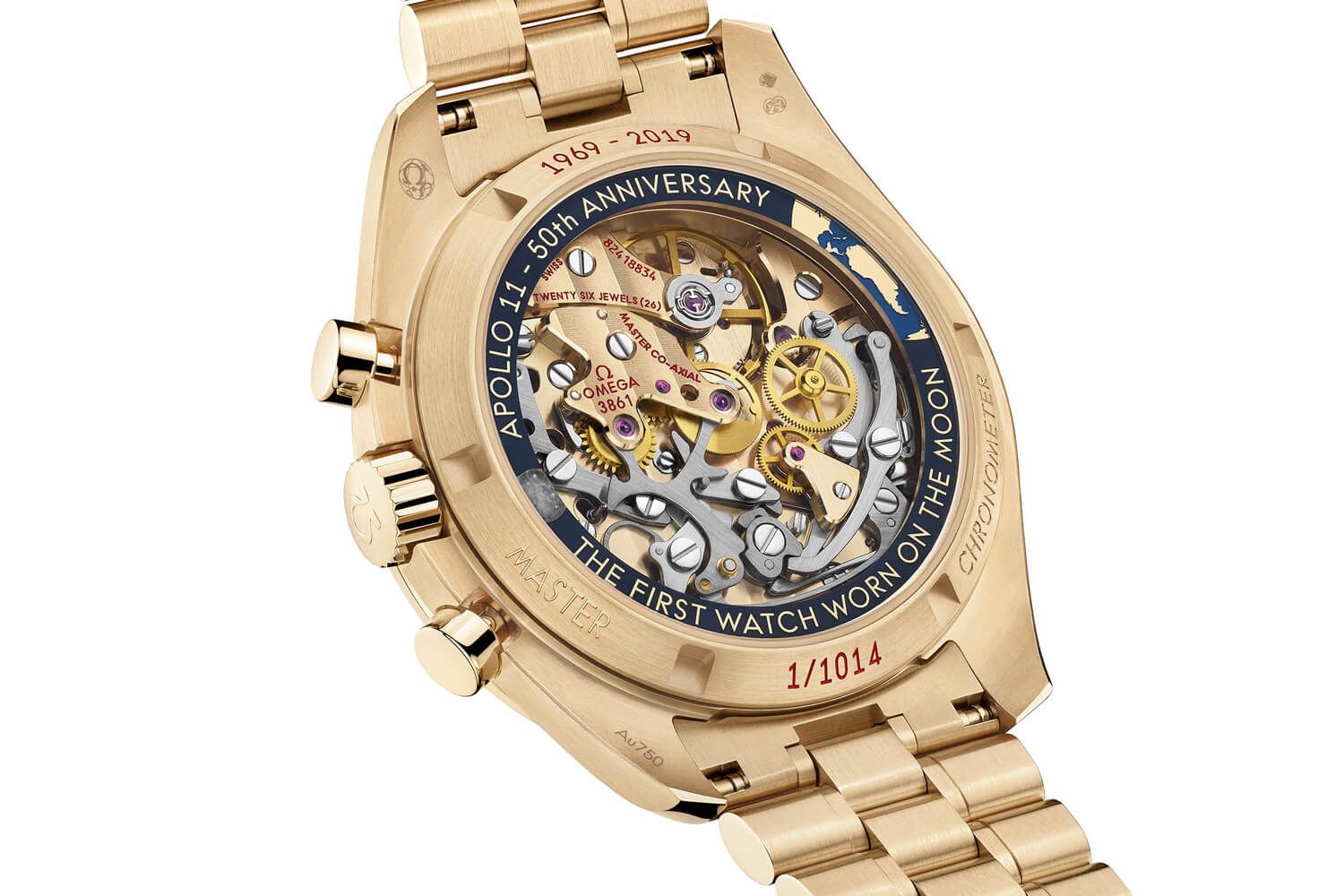 All of that mechanical magnificence can be spied through the sapphire caseback, something else the original didn’t have. Granted it has no presidential inscription, but the sight of the movement surrounded by a blue 50th anniversary ring is spectacular to look at.

The anniversary timepiece is limited to 1,014 pieces – a reference to the number of original, full-gold commemorative Speedmasters Omega originally produced, from 1969 to 1973. It’s a spectacular watch not just in and of itself (though that would be enough) but because of what it represents: one of the greatest achievements in human history.