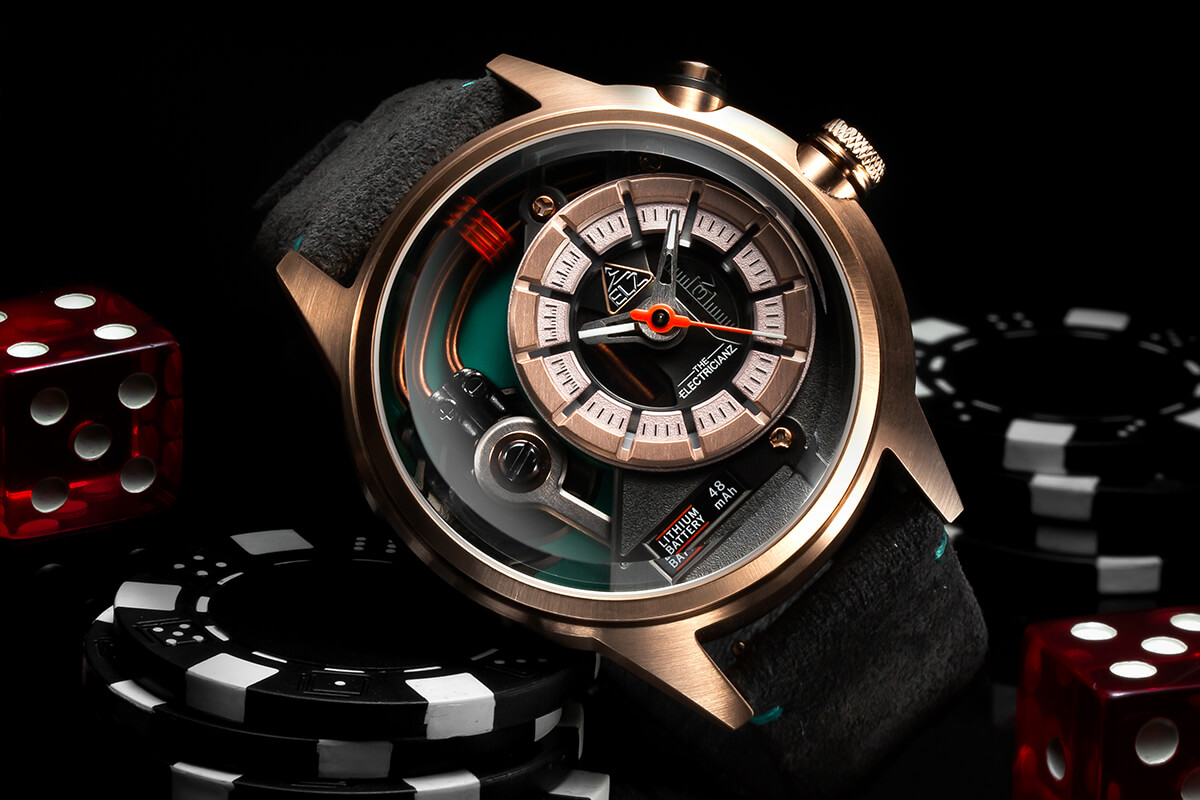 Not all quartz movements are created equal, and those by The Electricianz are among the elite. It’s not necessarily that they’re innately better – though in many instances they are – it’s that their battery-powered movements are their signature feature. We saw that in the sandy-coloured DeZert and now, even more aptly, with the four-piece Steel Z Collection.

The name comes from the use of plain steel cases throughout the collection, which sounds like it should be a non-starter. The Electricianz in the past however have used a nylon coating for their watches, which creates a softer, velvety feel. The result is a sharper look than their watches have ever had, something nicely reflected in the dials.

The asymmetrical dial is cool in its asymmetry, with the greater part displaying seconds, minutes and hours off to the right-hand side. It’s sectioned look is like a futuristic doomsday clock, a fitting foil for the exposed wiring that takes up the rest of the dial space. It’s futuristic in a functional, steampunk kind of way.

The Electricianz are known for their LED backlighting, another electrical touch that makes the watches impeccably legible in low light. In the Steel Z collection though, they’ve added a fifth LED. The result is a glowing dial that can be read as easily at night as it is during the day. More so, perhaps.

Despite sharing the shame movement, layout and overall design, the four watches have distinctly different personalities. The Steel Z itself is the most restrained, leaning on the silver of the new case  with a matching dial and complimentary hints of bronze and rose gold across the hands, crown and conductive cables.

The CaZino amps up the colour, pairing the conductive wire with a backing of green to imitate the felt of a gambling table. With flashes of orange on the second hand and band securing the wiring – along with a rose gold PVD dial and case, it’s a funky, rich take on the design.

The Soprano Z is similar in its use of rose gold, but by stripping out the off-kilter colours it becomes a a more elegant take on the design. The rose gold is wonderfully bright and a nice counterpoint to the unusual layout of the dual-battery quartz movement.

The final is by far our favourite: the Stone Z. It pairs the steel case with a bright blue dial and hints of the eye-catching colour in the smaller components of the movement. It’s the most striking and futuristic of the lot and to us defines The Electricianz in the best possible way.

With the Steel Z collection, The Electricianz continue their unique take on quartz movements and the power of horological electricity, in a more accessible, intriguingly-designed way than ever.