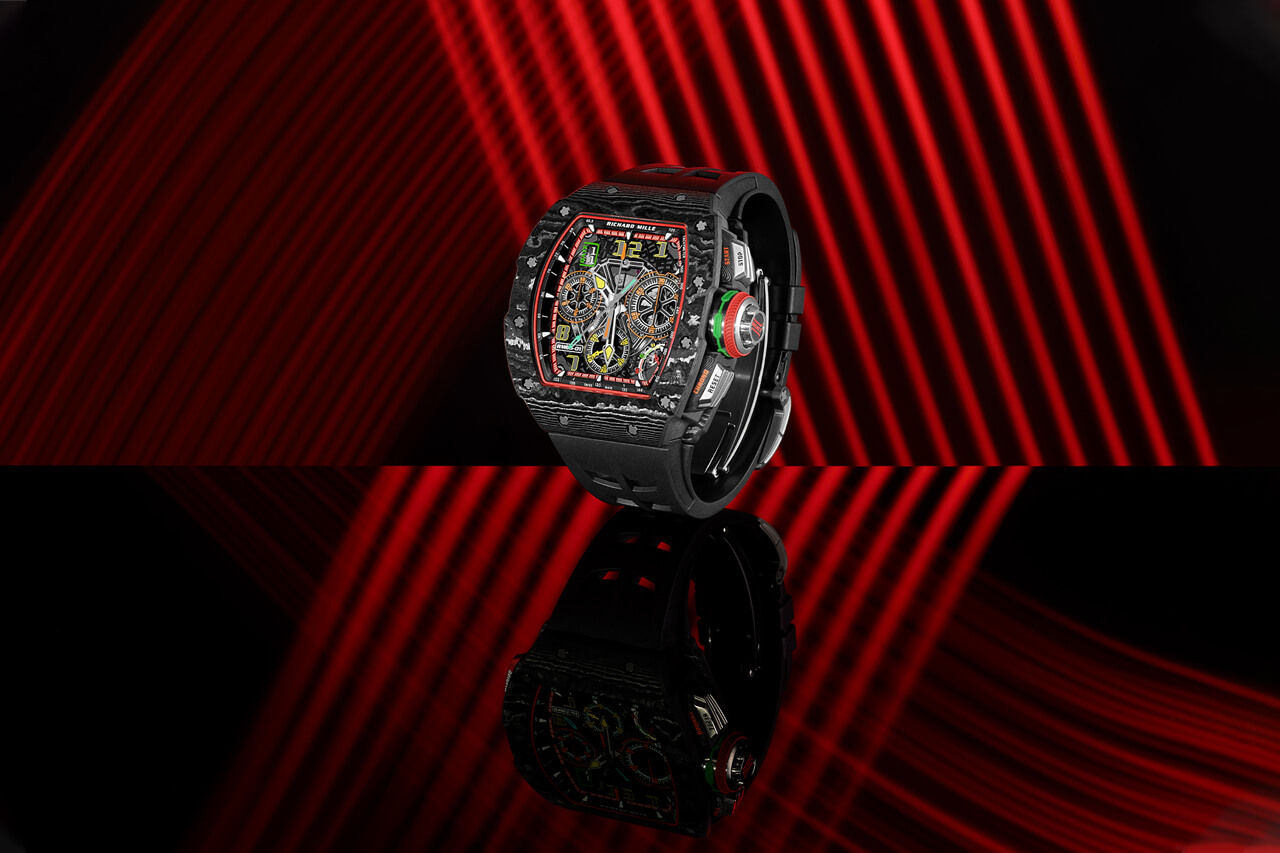 On first glance it’s apparent there’s a lot going on with Richard Mille’s new RM 65-01, both visually and, thankfully, technically. RM’s sports watches have always been frenetic but the designers of the 65 don’t appear to have said ‘no’ once during the watch’s five-year development. Still, for customers already sold on the brand’s unique offering, I seriously doubt whether there’s such a thing as too much Mille.

The RM 65-01 is Mille’s first automatic split-second chronograph (or rattrapante) and the brand claims it is the most complex watch to have ever left its workshops, which is quite some statement considering the brand’s back catalogue. 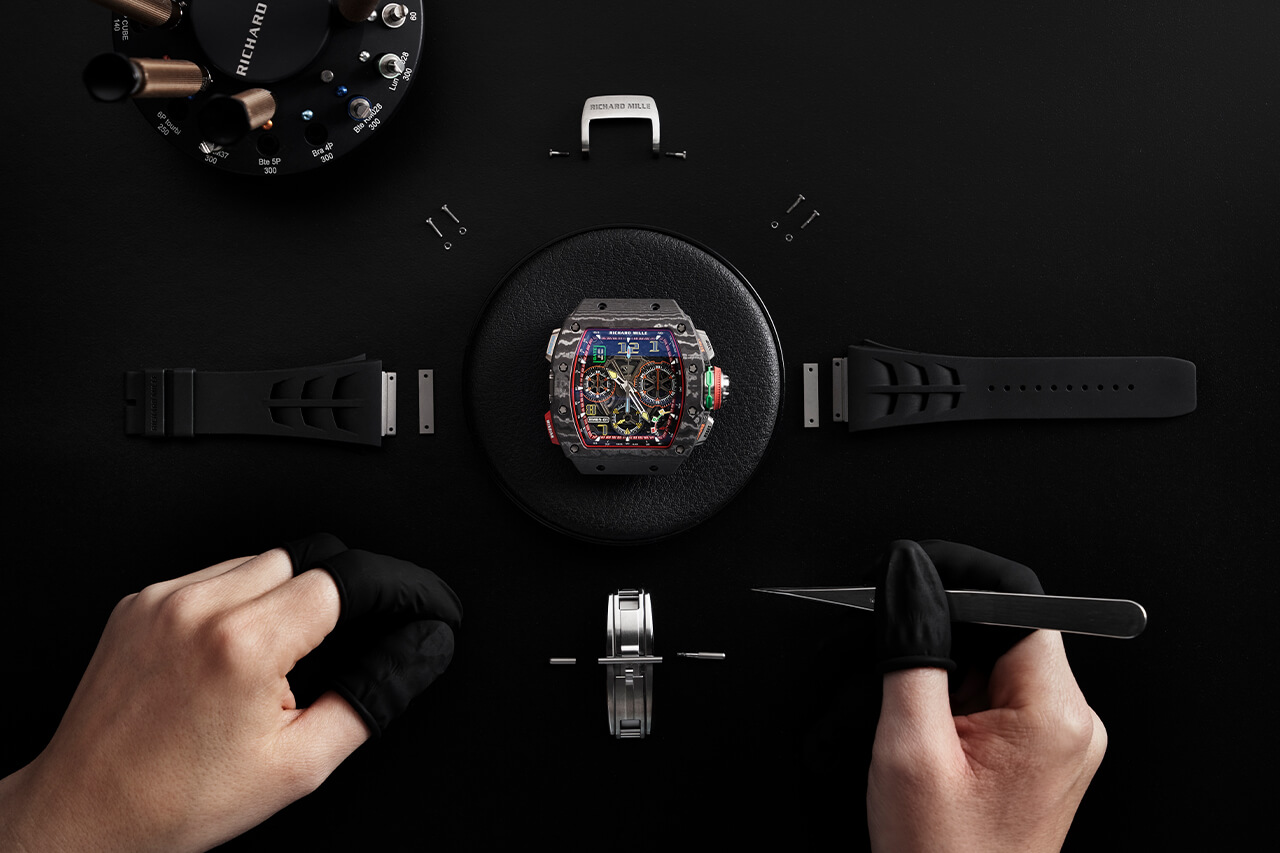 Regular Richard Mille partner, Vaucher Manufacture Fleurier, the movement arm of Parmigiani, helped develop the watch’s Calibre RMAC4 high-beat or 36,000 vph movement with variable inertia. The performance of a watch’s balance is affected by so many differing factors that it would be incredibly simplistic to say that the faster the balance the more accurate the watch, but that’s the theory anyway.

When employed in a chronograph (which is not as common as you might expect) a high-beat movement does allow for measurements to be recorded on a more precise scale, with 5Hz movements such as this allowing for readings on the 1/10th of a second scale. 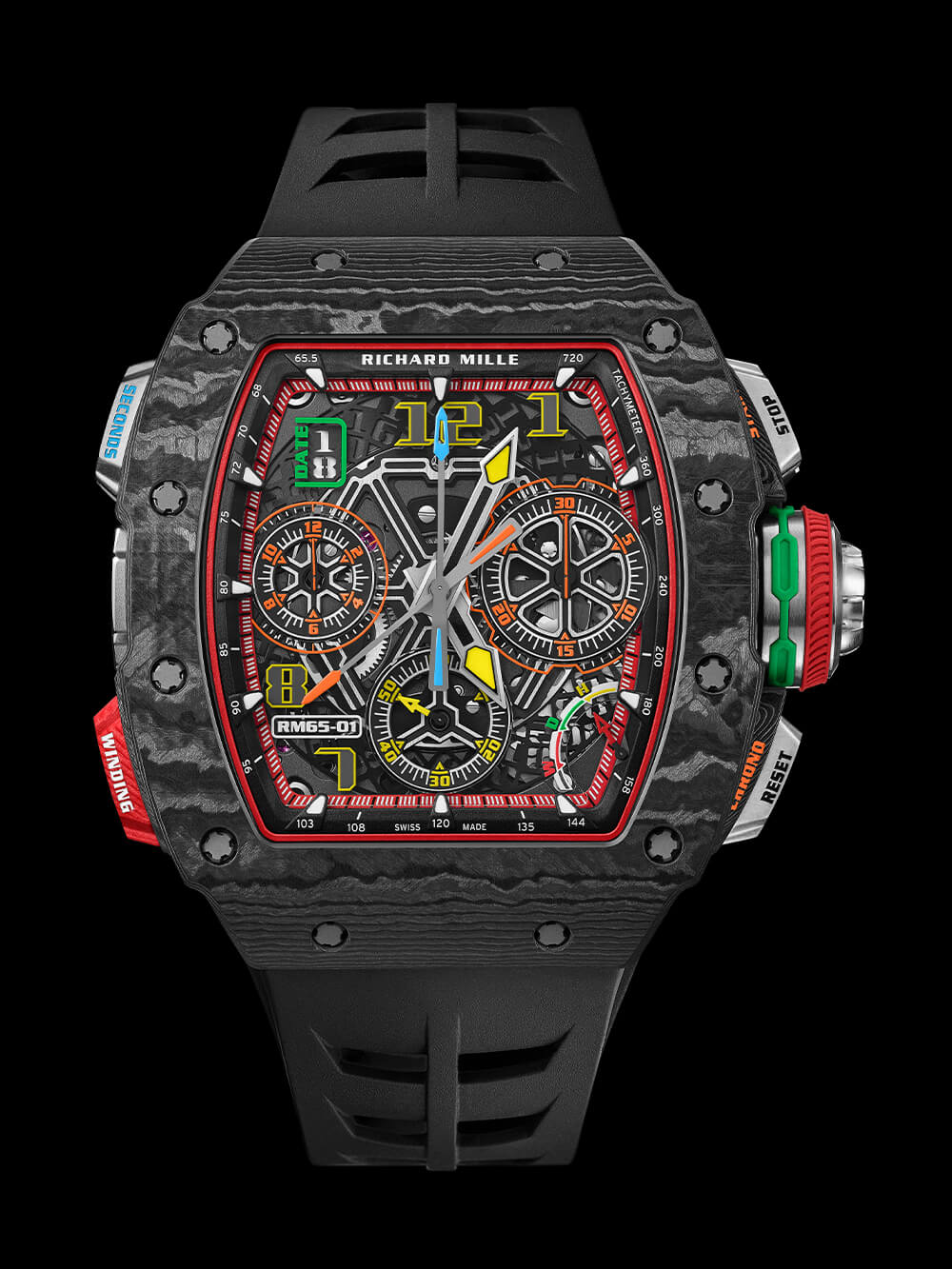 The Grade 5 Titanium movement (as are the crown and pushers) boasts a useful power reserve of 60 hours and the watch’s designers have paid a great deal of attention to how its fast-winding barrel is kept wound; for a start the ‘variable geometry’ winding rotor can be tailored to the wearer’s lifestyle. While the active lifestyle of an athlete might not need much help keeping the mainspring wound, someone with a more sedentary daily routine might require a more sensitive rotor configuration. Either way this sounds like a trip back to the manufacturer to alter and not something the wearer could alter. 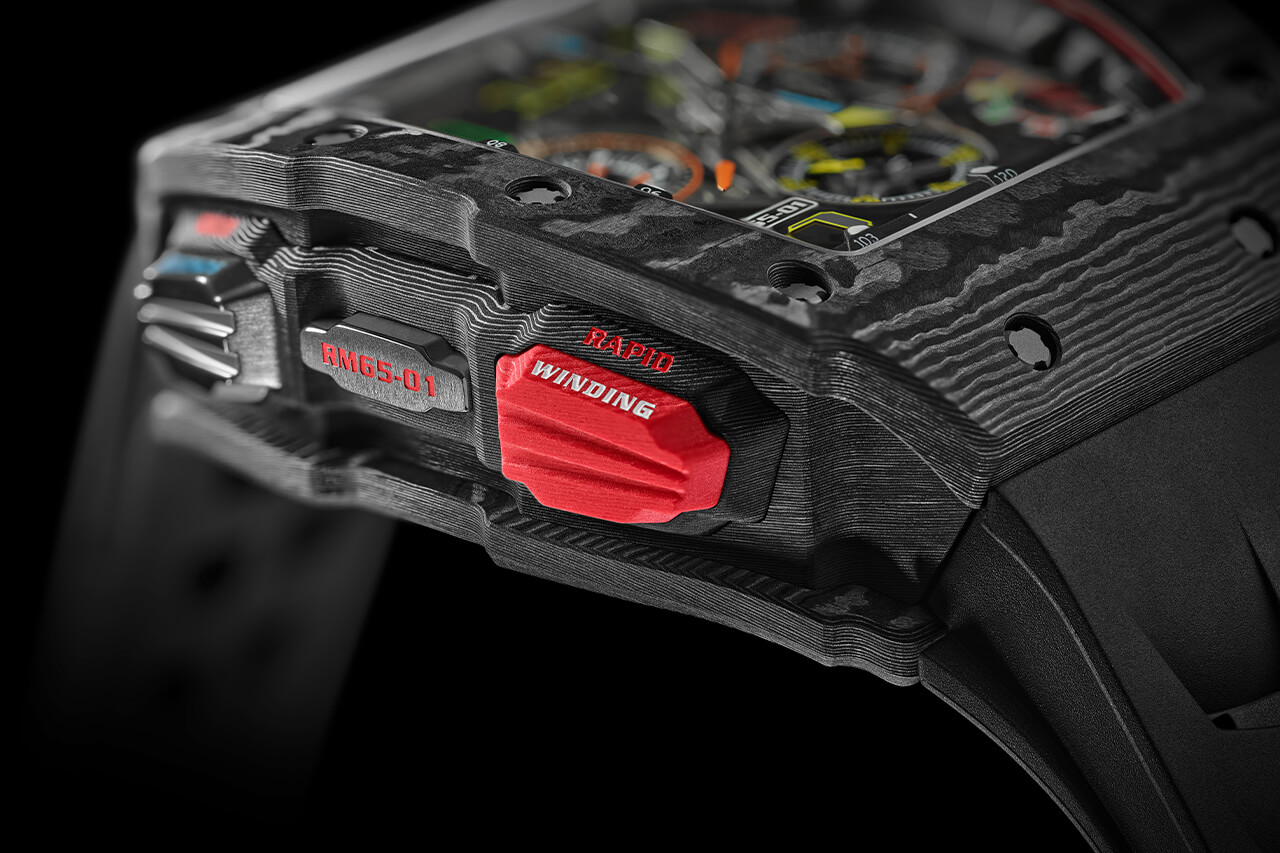 But if it’s interaction you’re after, movement lead Salvatore Arbona added a ‘rapid-wind’ pusher at the eight o’clock position that winds the watch, with a full wind requiring no fewer than 125 pushes. It’s a neat development and takes some of the physical stress of operation away from the crown, not that the RM 65-01’s crown looks particularly frail, but there is a good reason for that too. 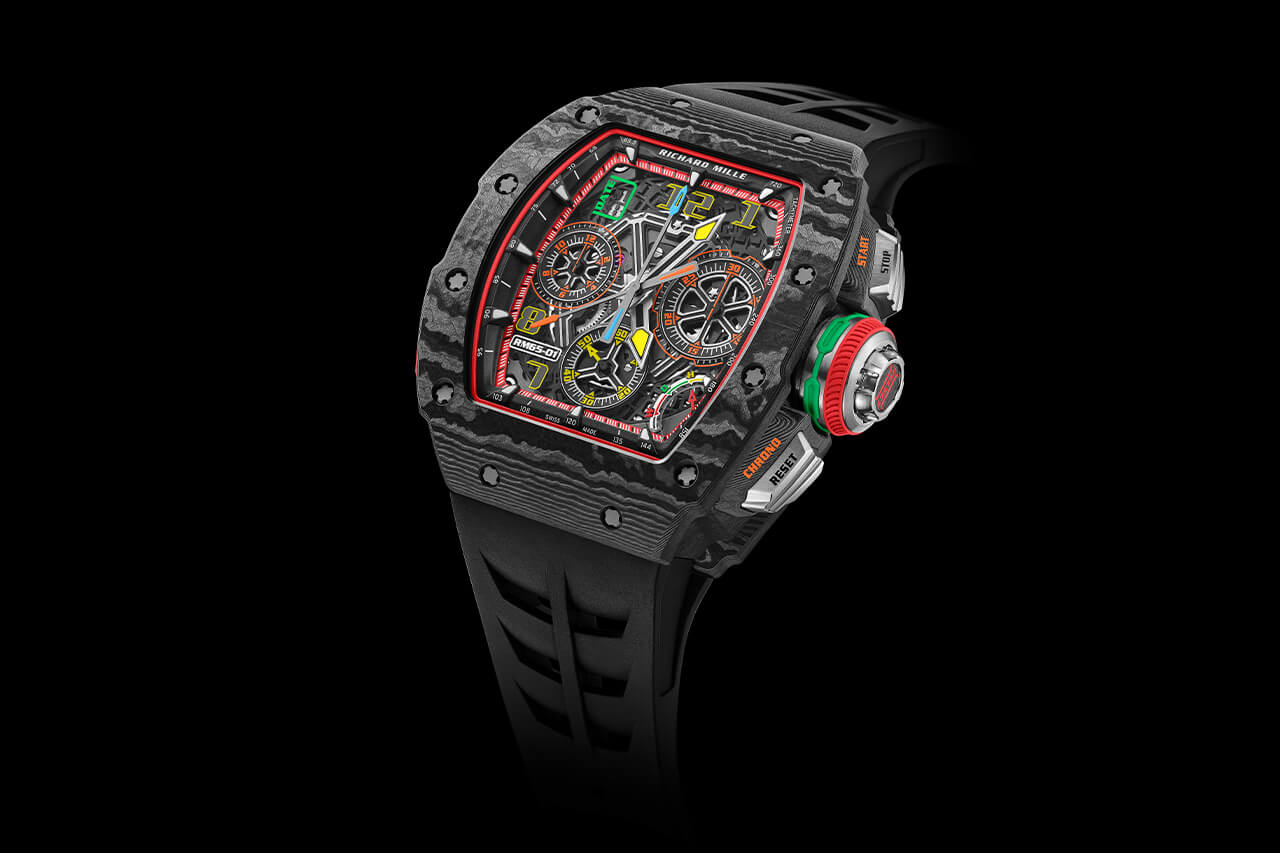 All of this interaction through the crown and the winding pusher (not to mention the start/stop, reset and split pushers of chronograph require no fewer than six column wheels inside the movement and also explains why the watch has undergone quite such rigorous testing, with a simulated ten-year’s worth of operation. 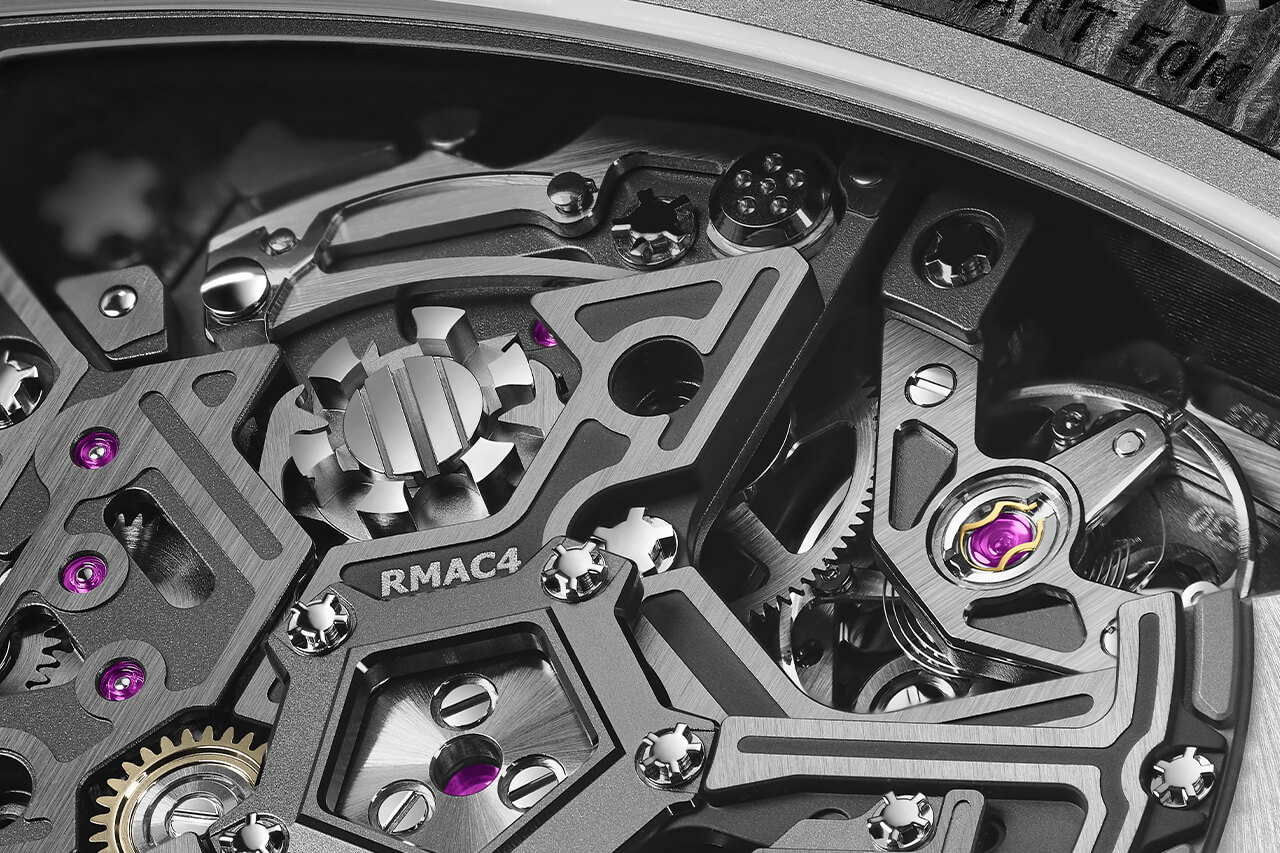 As it turns out there is also a good (technical) reason for the watch’s full-spectrum colour palette, with each function carefully colour-coded. Yellow components deal with timekeeping, green identifies the date, orange is used for chronograph displays, red is winding and blue picks out the split-second hand. All perfectly logical, if a little demanding on the eye.