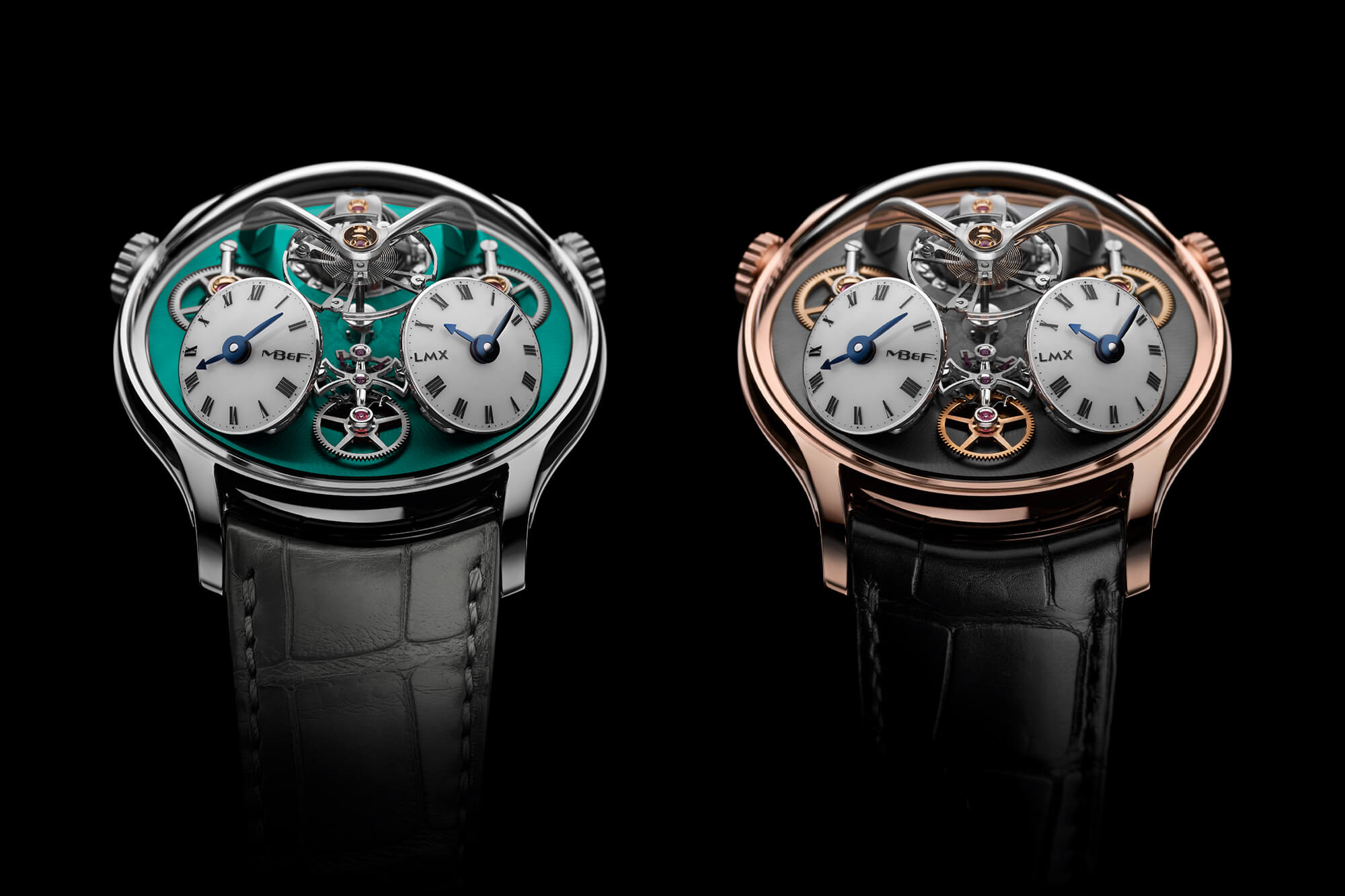 Back in 2011, MB&F had launched four of their Horological Machines, the weird, wacky and horologically magnificent creations that put their collaborative watchmaking efforts on the map. Unique case shapes and avant garde mechanics were pretty much the norm, even by that point.

Then came the Legacy Machine. It was as closer to a traditional, classically-finished timepiece than anyone expected from Max Busser & Co, with round cases and lacquered dials. Oh yeah, and a flying balance spring. Well, it is still MB&F.

Over the decade since, the Legacy Machines have made a distinct wing of MB&F design, offering a twist on the conventions of fine watchmaking instead of a space station, robot or angry bulldog. The innovations have still been there, including things like split escapements and ever more flying components, but the LMs have always been more recognisable as, well, watches.

Which brings us to 2021 and, celebrating a decade of Legacy Machines, the new LMX. 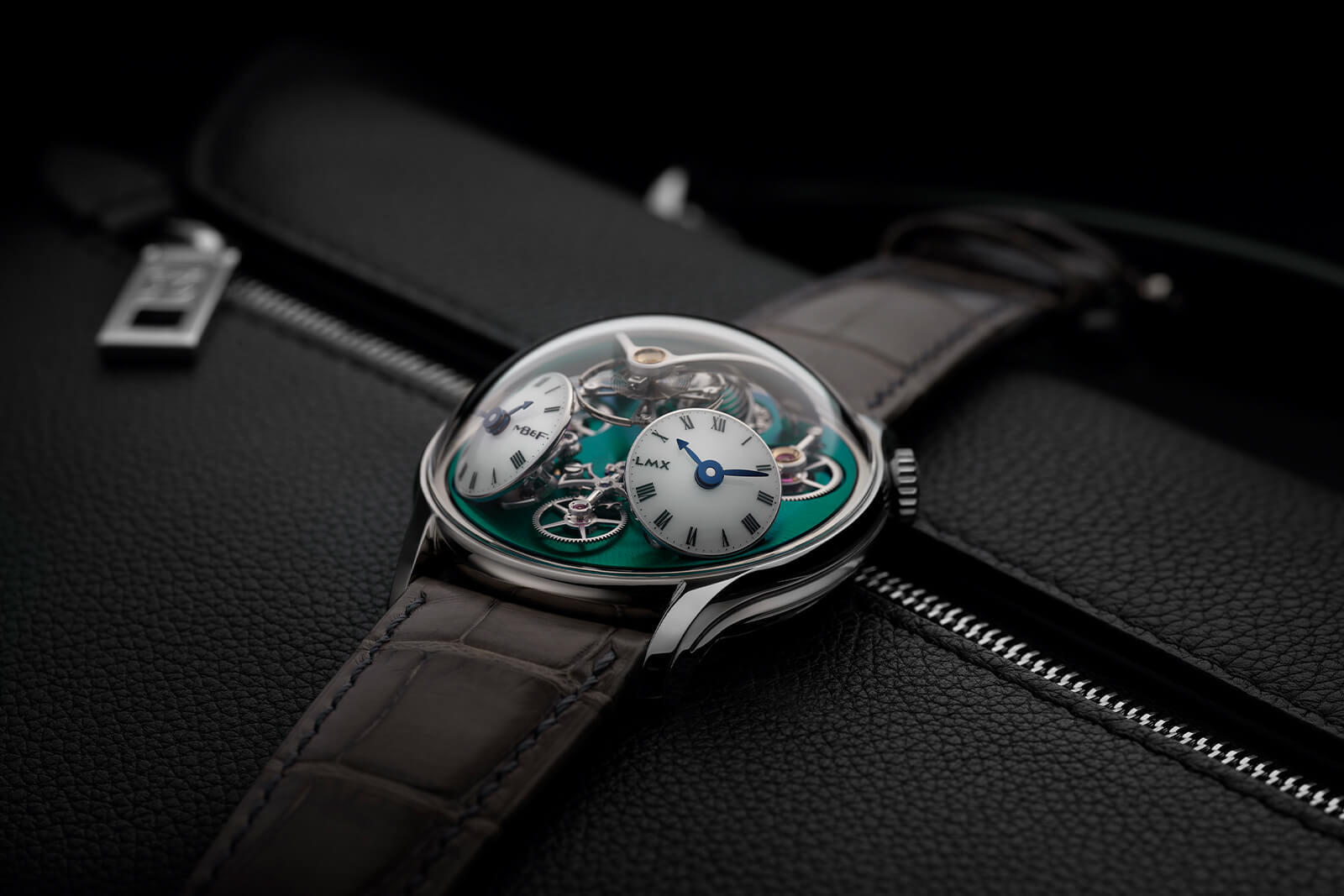 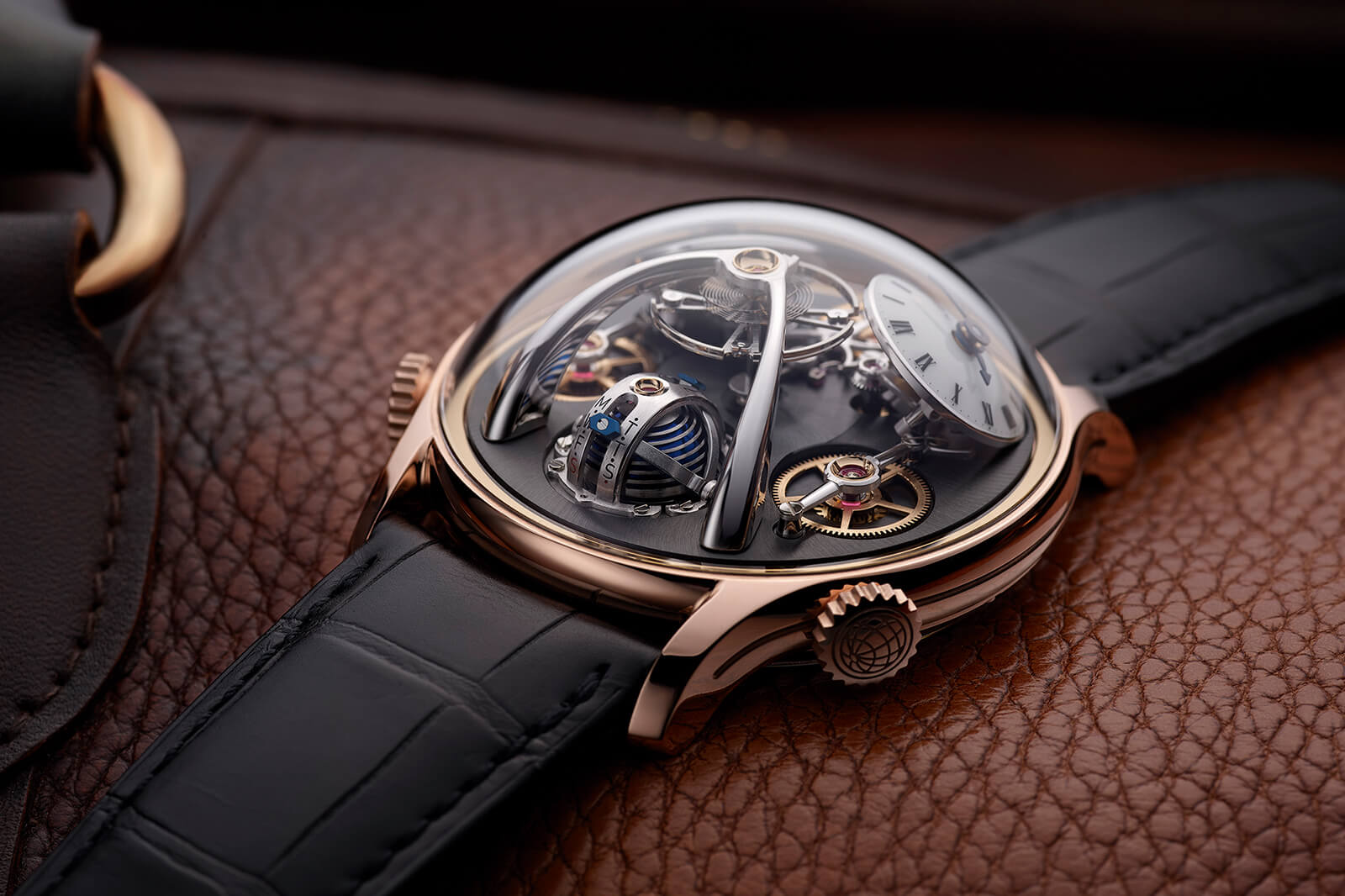 The LMX takes many of its cues from the original 2011 Legacy Machine. That means two white lacquer dials operable via the two crowns at 10 o’clock (for the left) and 3 o’clock (for the right), allowing a dual timezone display. These dials however are set at an angle, making them easier to read for the wearer and far, far harder to build for the watchmaker.

The main difference here though is that rather than the earlier LMs that only really showed off the flying balance wheel, the LMX follows in the lines of later models a bit more explicit in their mechanical reveals. In this case that means MB&F’s signature battle-axe escapement bridge and elements of the gear train and three large wheels. 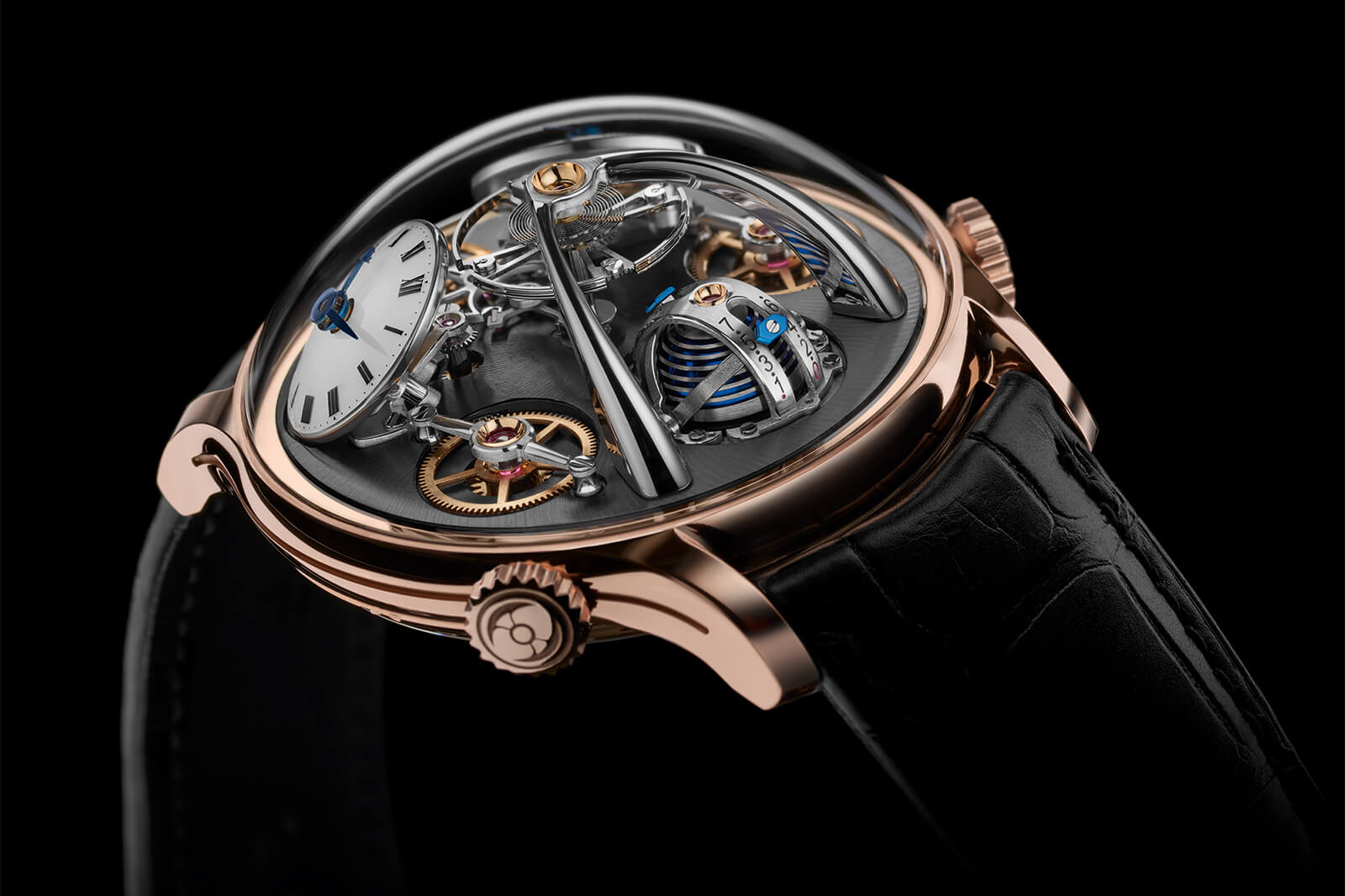 Then there’s the balance wheel itself. It’s massive and equipped with inertia blocks for increased accuracy and dominates the space under the massive, domed sapphire crystal. The final touch is another nod to the LM01, a three-dimensional, vertical power reserve indicator at 12 o’clock, showing just how much of the 168-hour store of energy is left.

The finishing is, of course, impeccable across the board, with polished supporting arms and those intricate, lacquered dials on the front, plenty of Côtes de Genève on the reverse. Although it’s hard to decide which way gives you a better view of the movement. 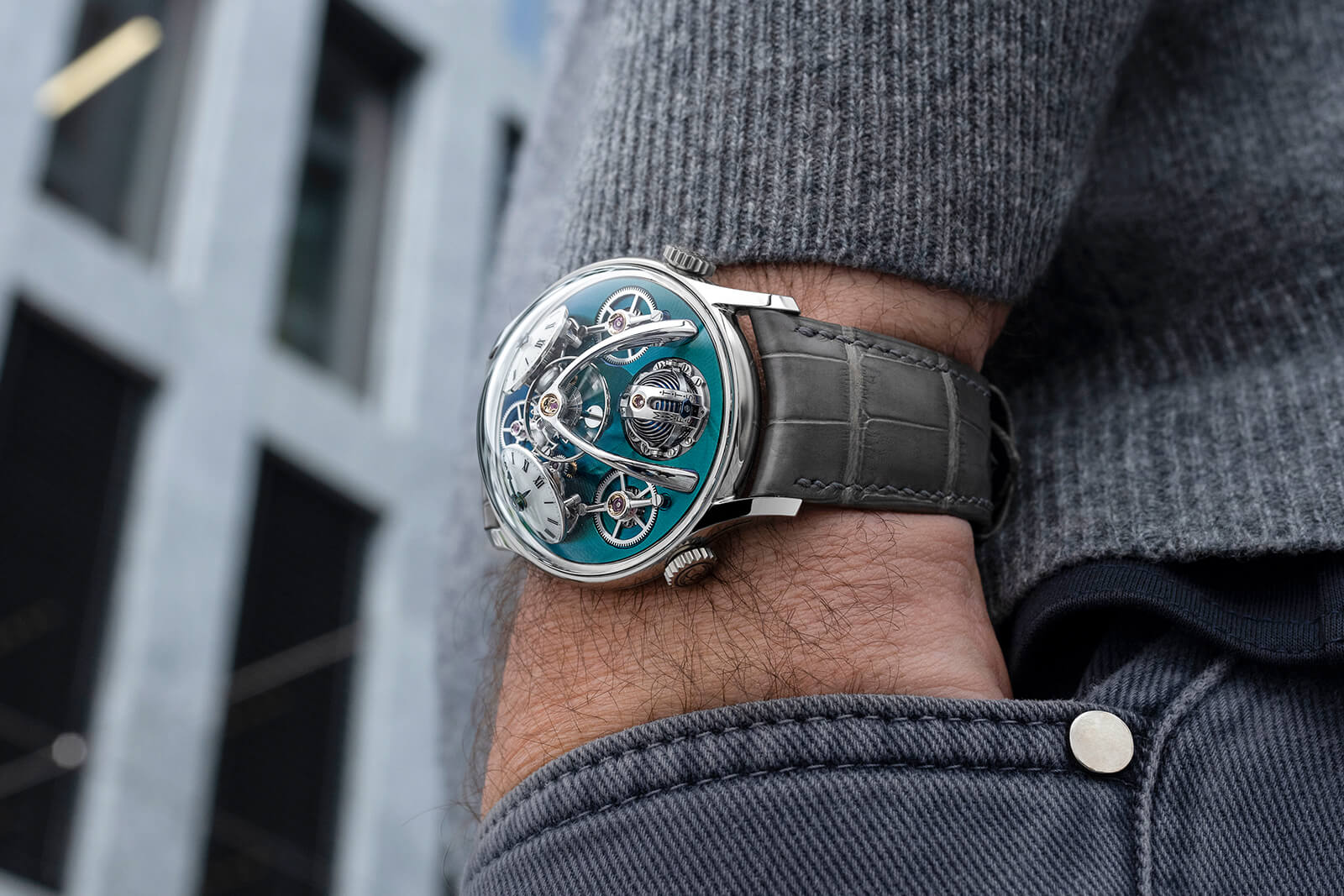 The LMX is available in two different colour combinations, either a red gold case with black plates and bridges or a titanium case with green. For me, it’s all about that green. Then again, with only 18 of the gold and 33 of the titanium, I’m not holding out a huge amount of hope about getting it on my wrist.