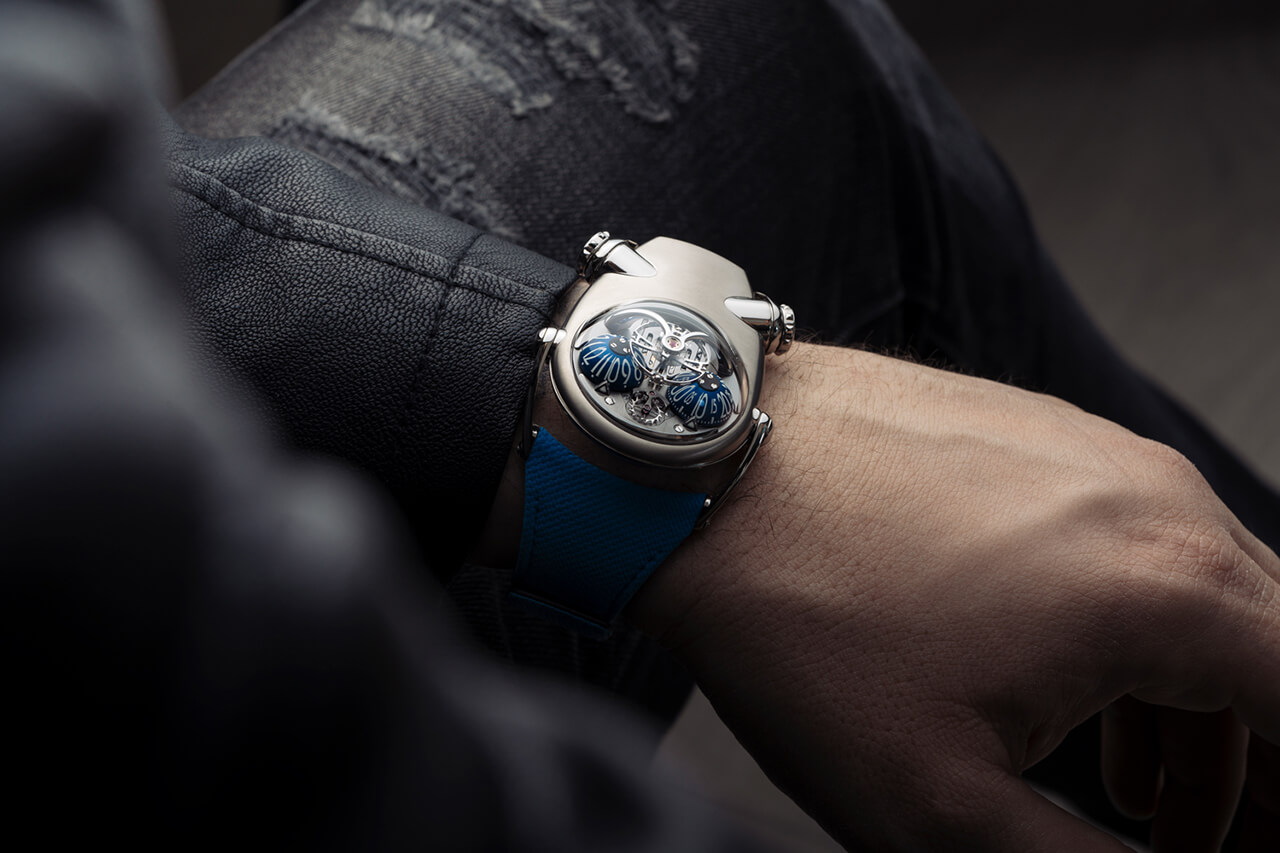 The good old British bulldog is an icon, in the dog world at least, but not precisely the kind of animal you expect to be immortalised in the world of haute horology. It’s not majestic or graceful, nor is it on the Chinese zodiac. It’s just an oddly proportioned, funny-looking pedigree – and one which MB&F has turned into their spirit animal in the latest and long-awaited Horological Machine No. 10 – the Bulldog.

This is the 10th watch in MB&F’s ground-breaking series, the cutting-edge haute horology timepieces that sit alongside the more classically-minded Legacy Machine (LM) pieces. It’s the series that lets founder Max Büsser and his watchmaking Friends (The M, B and F in the brand’s name) let loose. 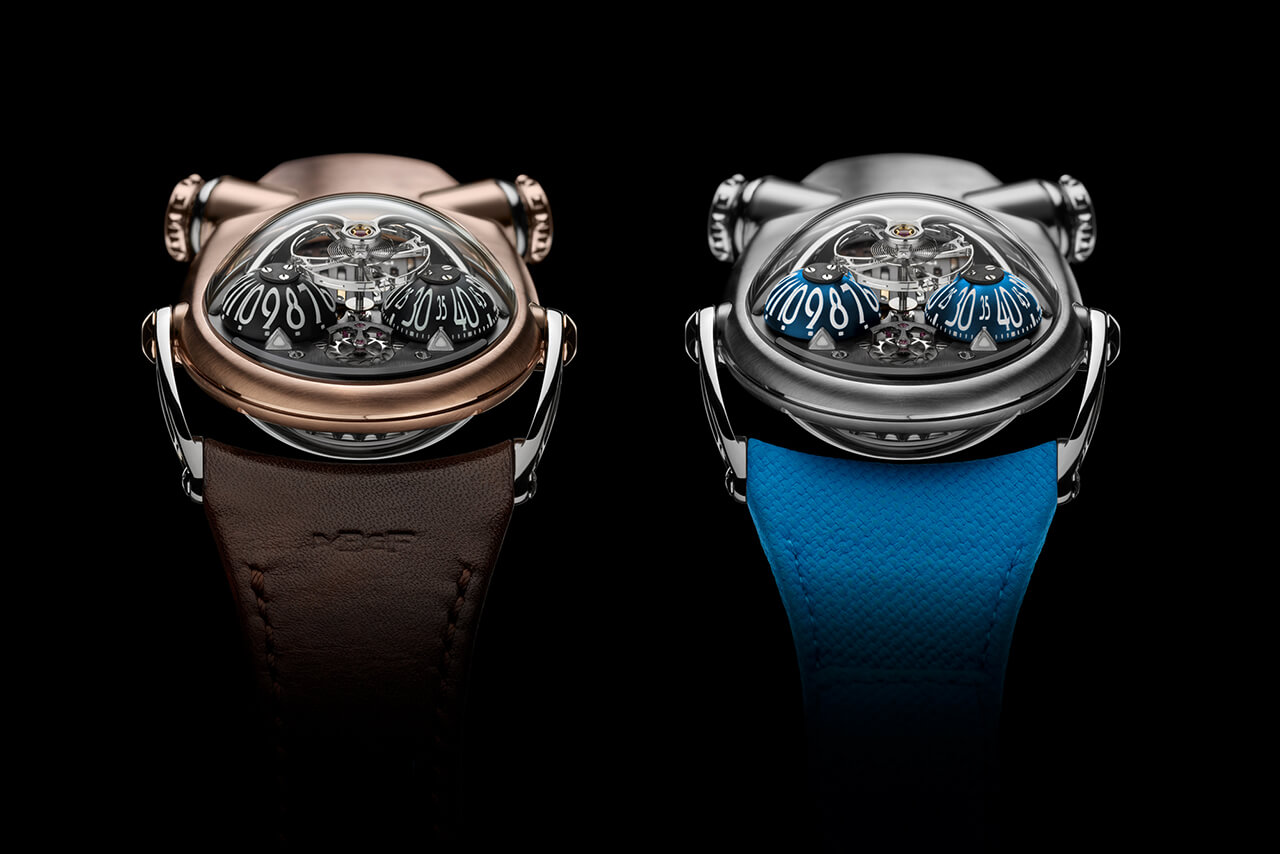 That means it’s got one hell of a pedigree to live up to, following in the footsteps of the likes of the HM03 Frog with it’s conical displays to the insane case shape of the more recent HM09. As the anniversary installation, the Bulldog takes inspiration from them all.

It’s obvious where the name comes from at first glance. MB&F’s twin semi-hemispherical counters – the left-hand for hours, the right-hand for minutes – make up the eyes, while the dual crowns set back along the head-shaped  case make up the ears. 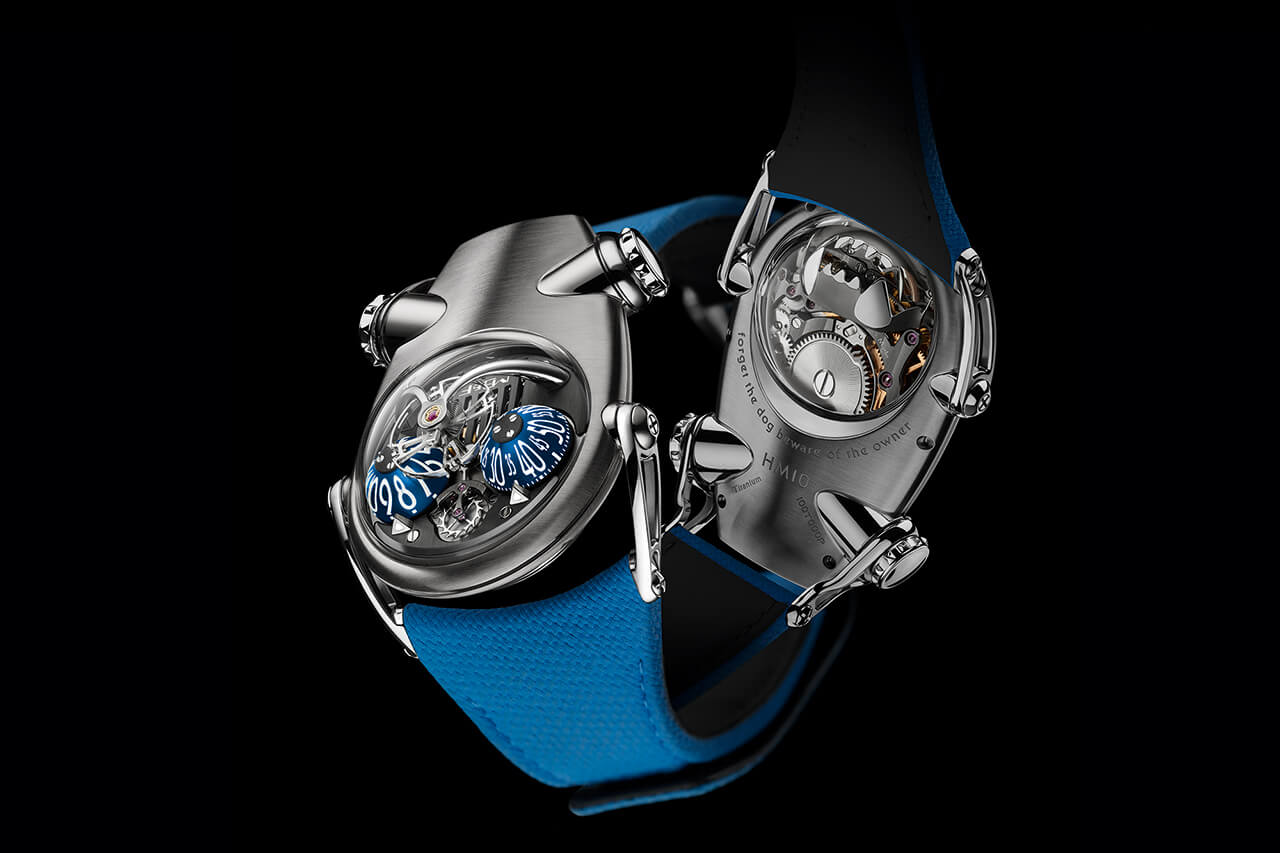 This being MB&F of course, there’s more of a twist than that. On the underside of the watch, dial end, you can find the Bulldog’s jaws – and there’s no interpretation here, but a real set of chomping metal jaws that open and close as the mainspring runs down for a Crufts-worthy take on the traditional power reserve indicator. 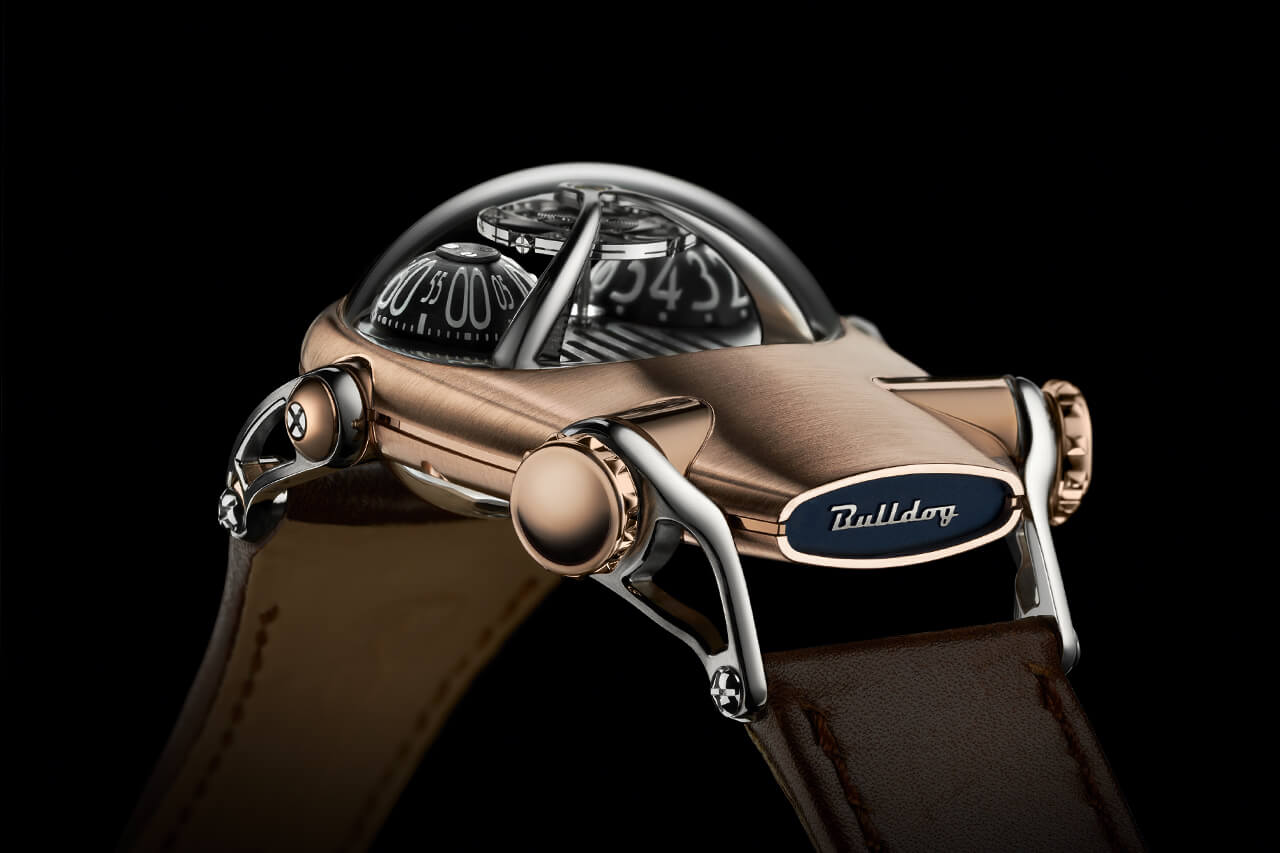 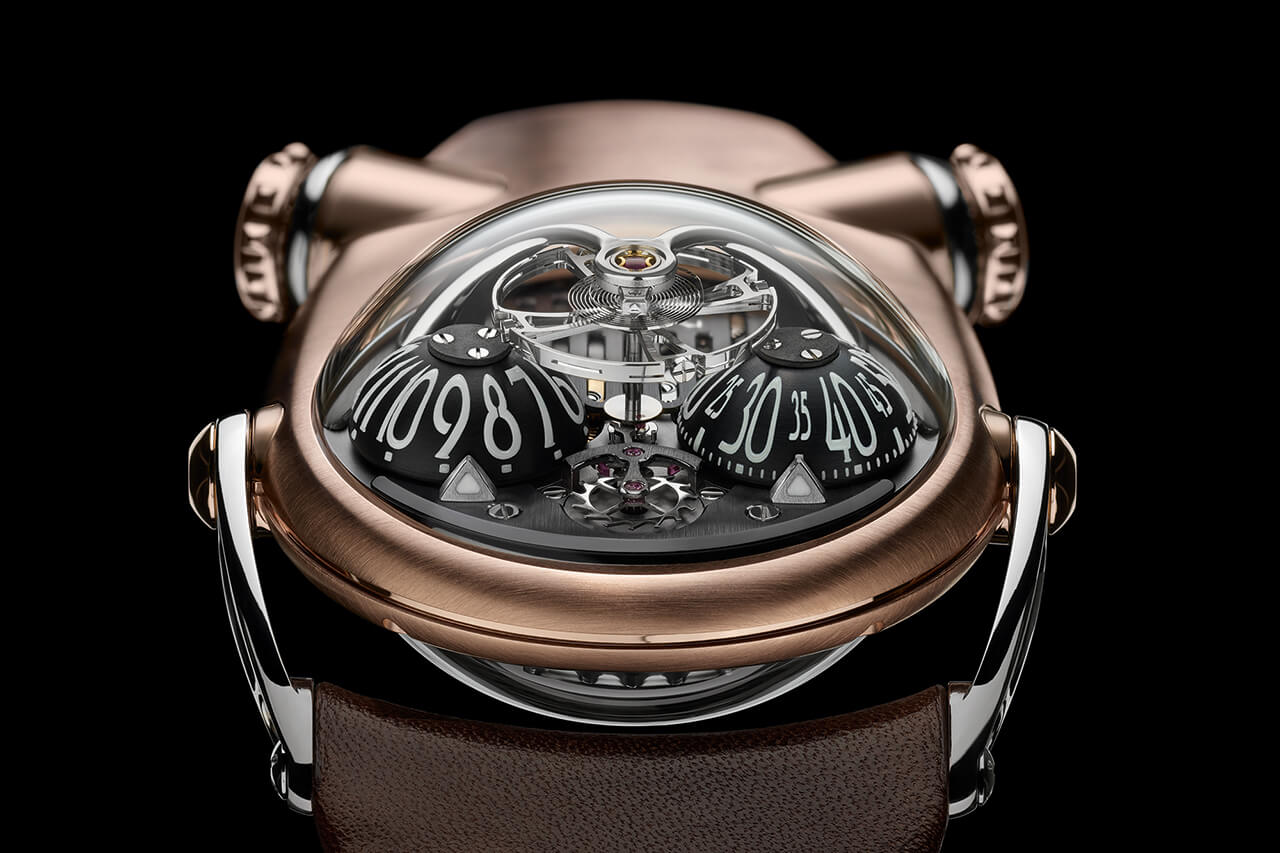 Otherwise the movement is as open as its namesake’s perpetually dopey expression, showing off the MB&F’s unique in-house movement through the massive piece of domed sapphire, complete with suspended balance wheel. That last is worth noting as it’s been a characteristic of the LM series in the past rather than the HMs.

It’s good to see the visually-mesmerising movement layout here in a watch that’s as quirky as any MB&F to come before (outside of their L’Epee clock-making partnership at least). It adds perpetual movement to what passes as a dial at MB&F, an eye-catching focal point for the watch. 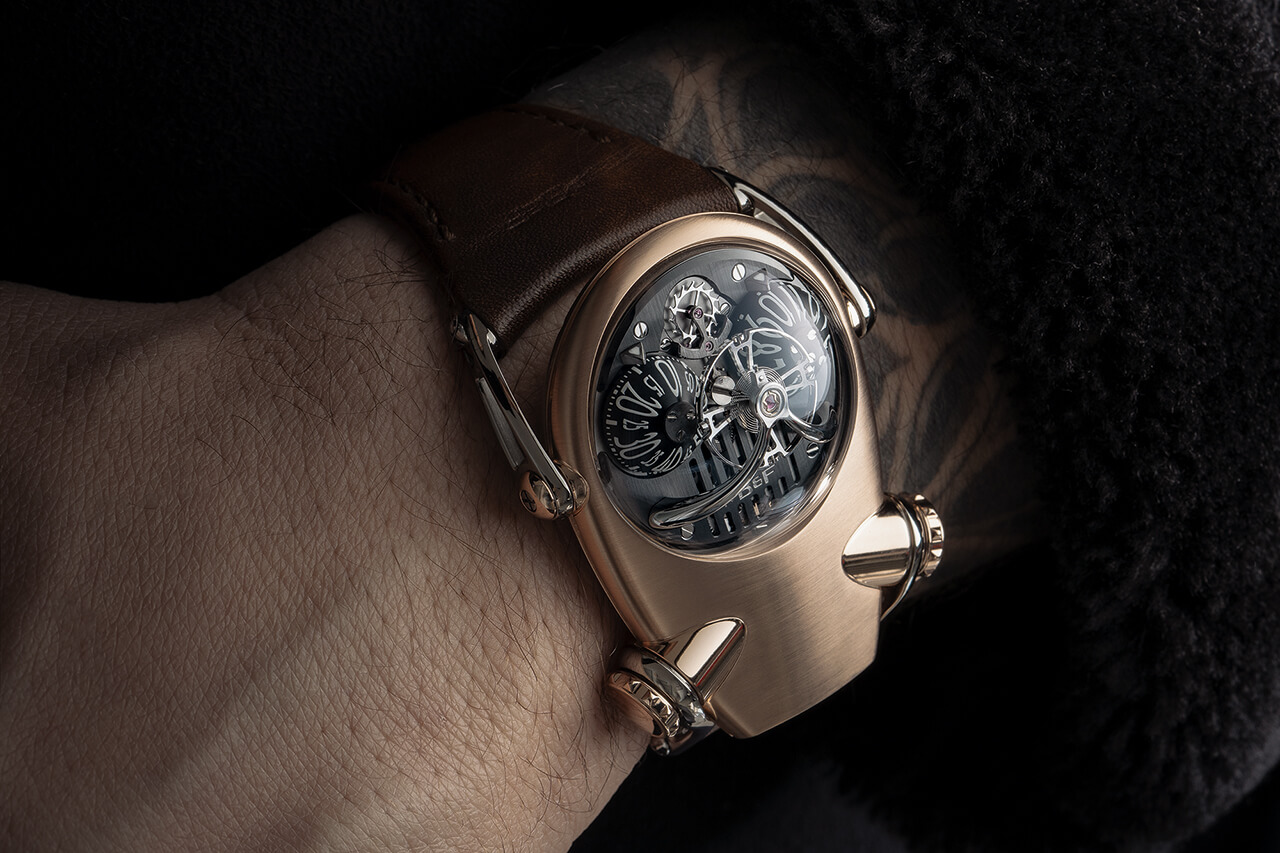 Despite the size of the case, the sprung lugs make it far more wearable than its dimensions might suggest. The 54mm (nose to tail) by  45mm (across the head) case is available in either full titanium, paired with blue minute and hour domes and matching blue strap or rose gold, with black comes and a chocolate brown strap. It just depends which colour of Bulldog you prefer.

If there’s one thing for certain, out of all of Max Büsser’s friends, we now know which is his best.