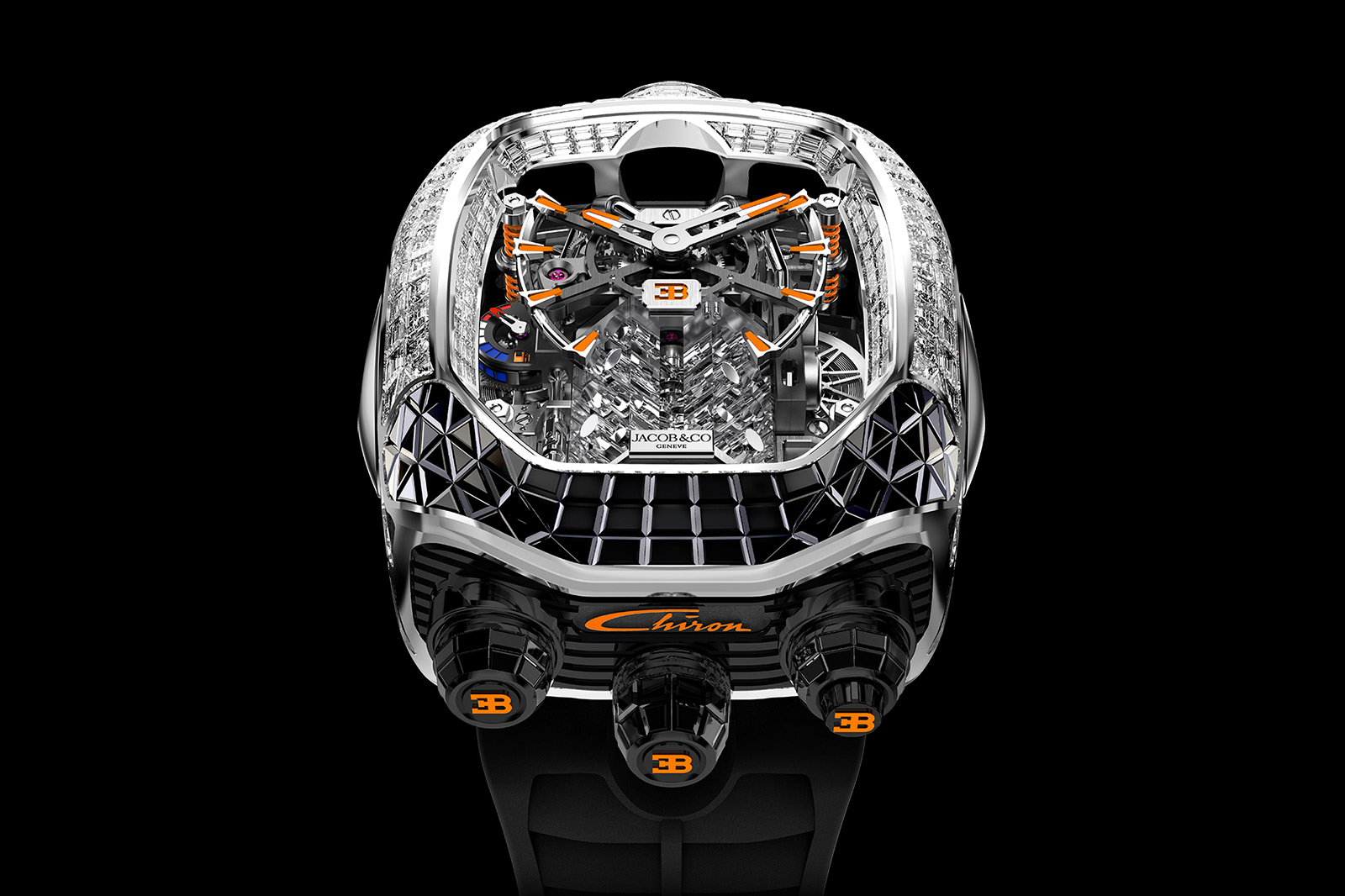 Let’s be clear, the Bugatti Chiron is an astonishing car. With 1500 bhp, it is pure hypercar madness, even challenging for the title of fastest production car in the world. But that doesn’t mean I want a loose approximation of one on my wrist – which just so happens to be Jacob & Co.’s newest haute horology endeavour – the Bugatti Chiron Tourbillon Black and Orange.

Jacob & Co. are known for their outlandish designs so their multiple previous collaborations with Bugatti make sense, although the outcomes haven’t always been to everyone’s taste. The case shape is based on the aesthetic of the actual hypercar but where the car is sleek and expertly proportioned to maximise speed and aerodynamics, the watch is somewhat squat and snub-nosed. Some quintessential essence of the car has been lost in translation with the miniaturisation. 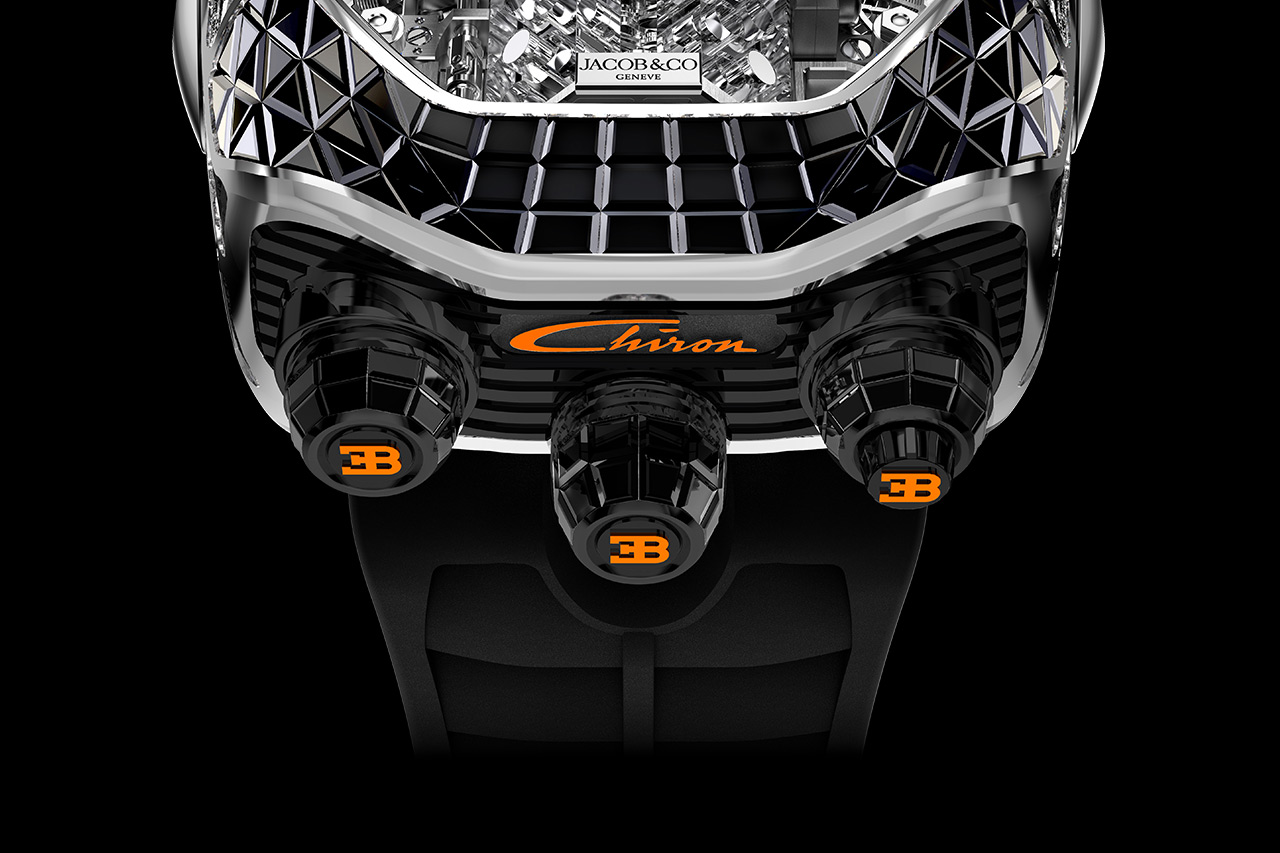 The case is made from 18k white gold and is set with over 400 gems – 190 baguette cut diamonds, 169 baguette cut black sapphires (across the case and crowns) and 42 baguette cut orange sapphires. I do have to tip my hat and say the texture created by the geometric paving looks really appealing but that would be true of any watch with this number of jewels.

However, as with the car, it’s what’s under the hood that really matters. The watch keeps its motor, the Manufacture Jacob & Co. Manual Winding JCAM37 movement, firmly on display thanks to various skeletonised features and clever bridge suspensions. It has a 60-hour power reserve, a tourbillon and plenty of shock protection to keep it running, all of which are what we’ve come to expect from a watch of this calibre. 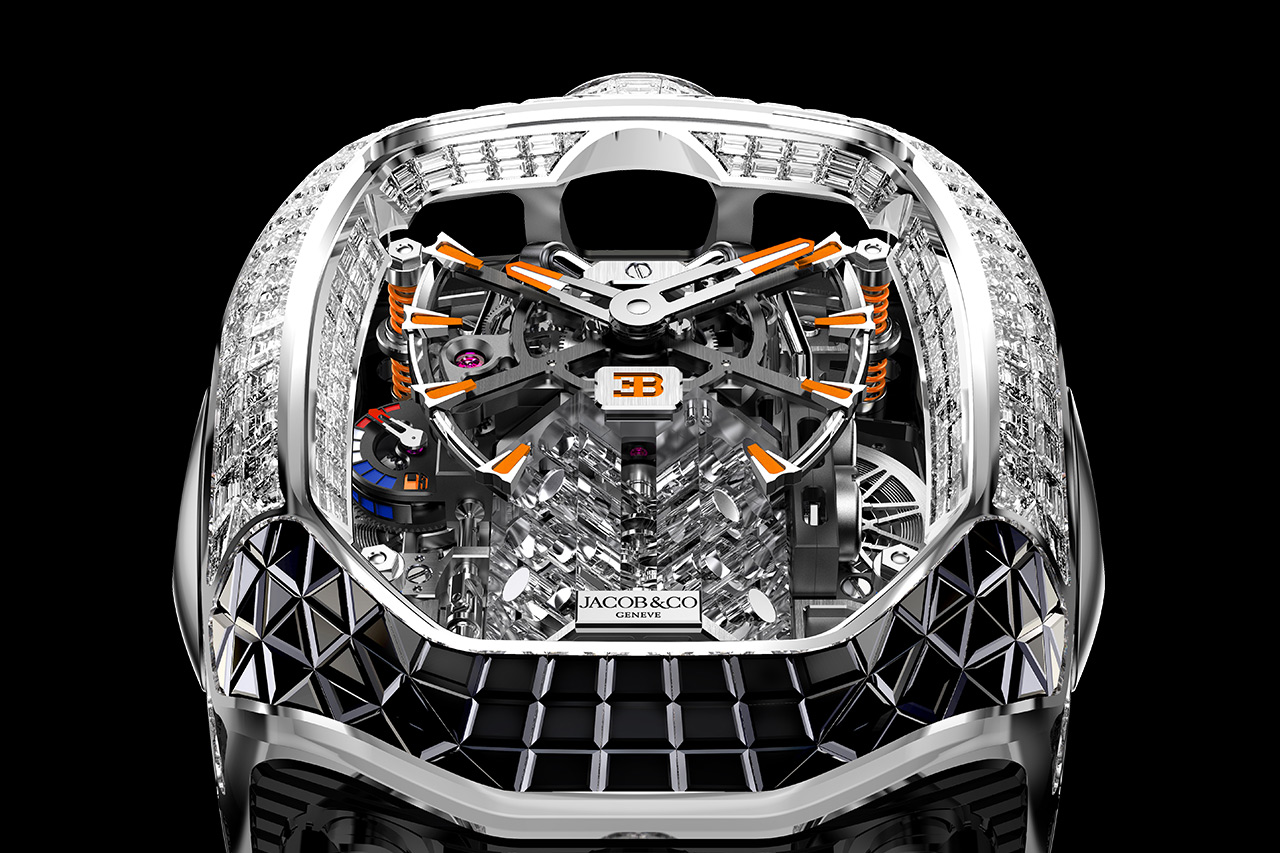 The watch’s party piece is its miniature, replica Bugatti Chiron engine that is clearly visible at the 6 o’clock position. It is technically an addition to the movement and is controlled by one of the pushers. It runs off of its own power reserve, so it doesn’t interfere with the watch’s basic functions. When it is turned on, 16 pistons are activated by a crankshaft replicating the activity of an internal combustion engine, two ‘turbochargers’ are also attached, which spin to further emphasise the similarities to the car (despite the car having four turbos).

Overall, it’s exactly the kind of watch we expect to see from Jacob & Co.: large, jewel encrusted, outlandish and with high-end mechanics. I don’t know why you would buy one unless you own a Bugatti Chiron and even then it isn’t to everyone’s tastes. I also don’t think it’s cool enough to warrant the poster status of an actual Chiron. There’s also the fact that this is a unique piece so really you don’t have to worry about buying it because you won’t be able to and that’s probably a good thing for your wallet and your style.