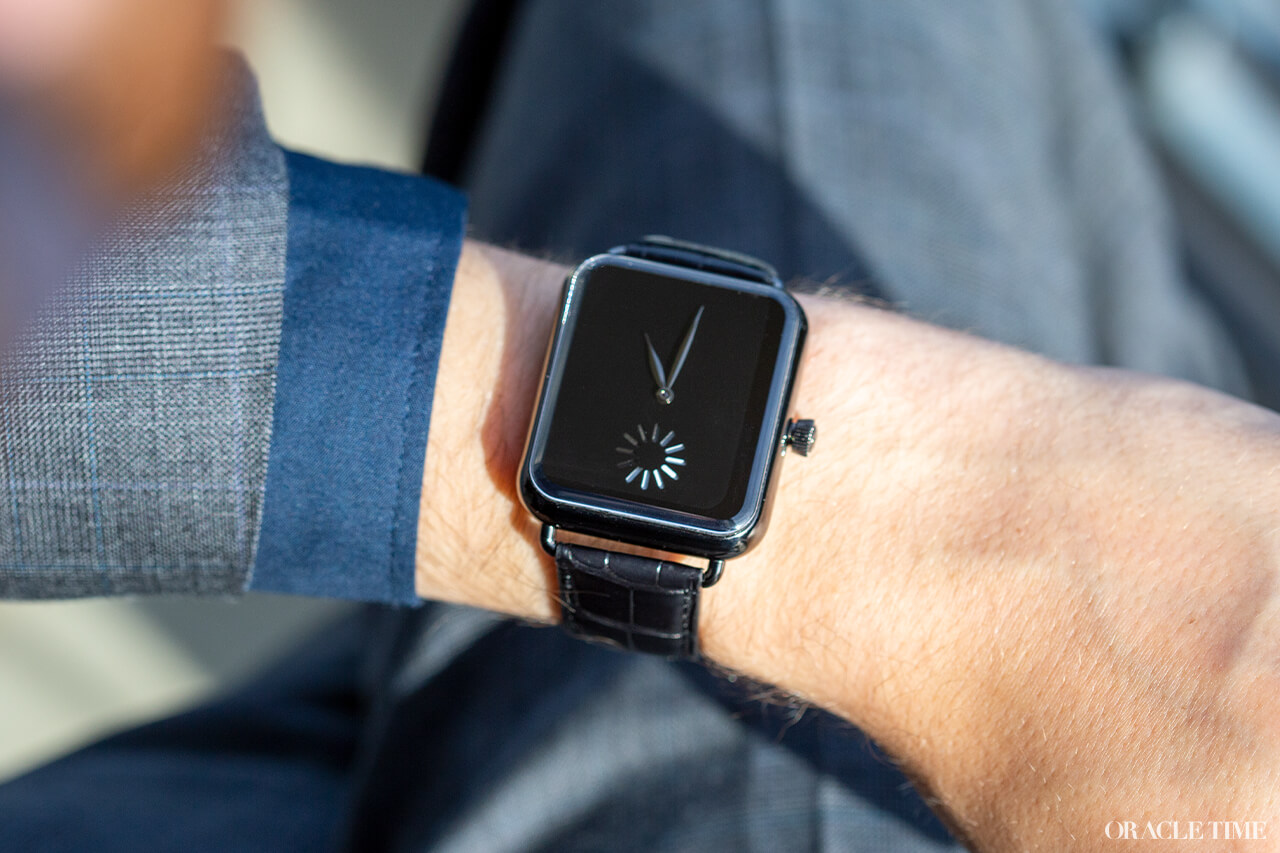 Back in 2016, Moser & Cie, darling of discerning collectors around the world, decided to build their own take on a connected watch. It was back when tech watches were coming to the fore and the Apple Watch, which had been launched just one year prior, was to be the doom of all mechanical watches everywhere. So who better for the Swiss watchmaker to take aim at?

Rather than using one of their own cases and filling it with tech though, Moser, being the brand that they are, did the opposite. They traced the outline of the Apple Watch and put in their own, in-house mechanical movement. Thus the Swiss Alp watch was born. 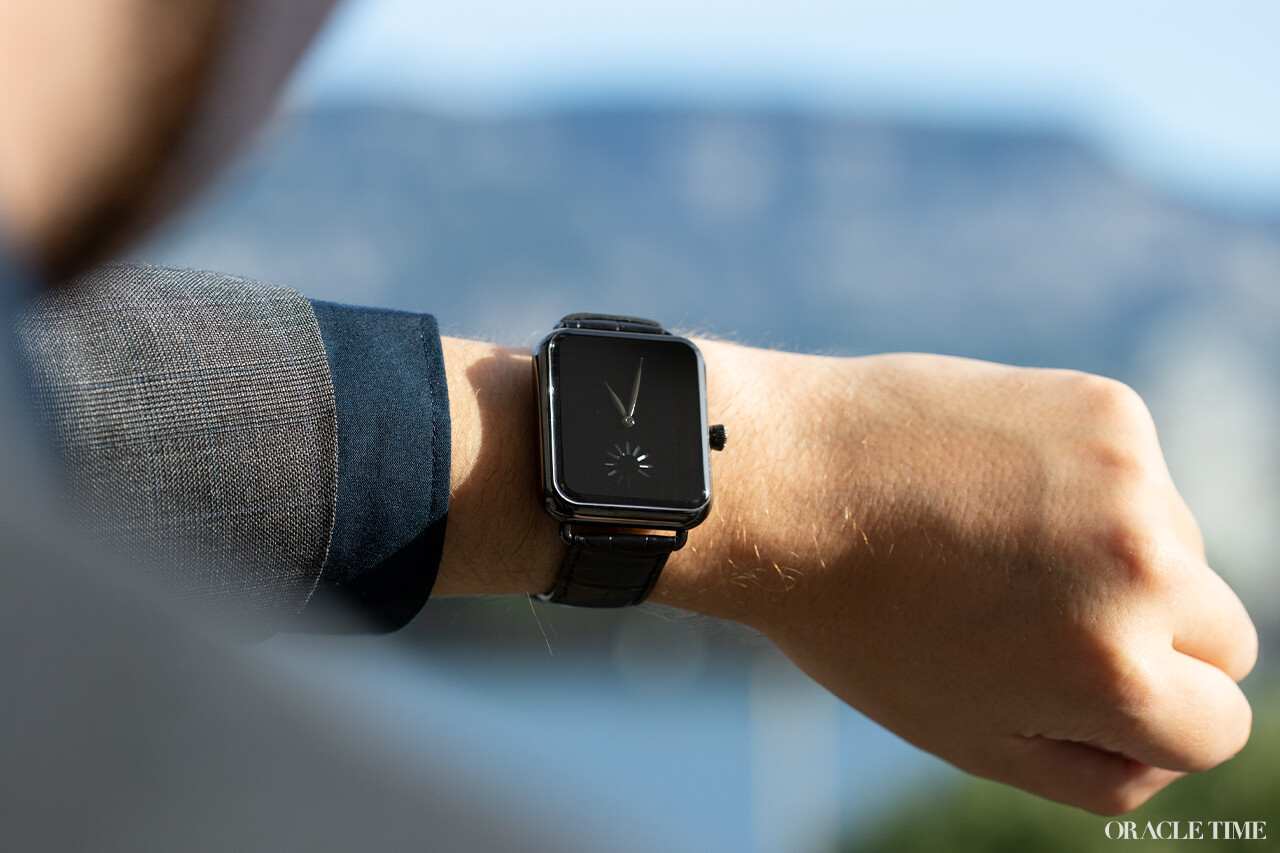 Since then there have been a handful of Swiss Alp Watch iterations, including last year’s piece unique minute repeater. Yet whereas Apple’s timepiece is at, what, 100 generations and counting, Moser & Cie has now announced the final version of their off-kilter creation: the Swiss Alp Watch Final Upgrade. Not because it’s been made redundant of course, but because they’ve pretty much perfected the formular.

More than any Swiss Alp Watch before it, the Final Upgrade can quite easily be mistaken for a genuine Apple Watch. This has to be the only time a watchmaker is actively trying to look like a much, much cheaper watch. The case is the same as previously, but the dial is now the spitting image of a digital screen. Without, you know, being a digital screen.

First off, it’s made from Vantablack, the blackest black that can ever be. It takes serious care and attention to use, as touching it ruins the effect, which is like staring at a gap in spacetime. The hour and minute hands are black, too, but still stand out against the dial enough to just about read. 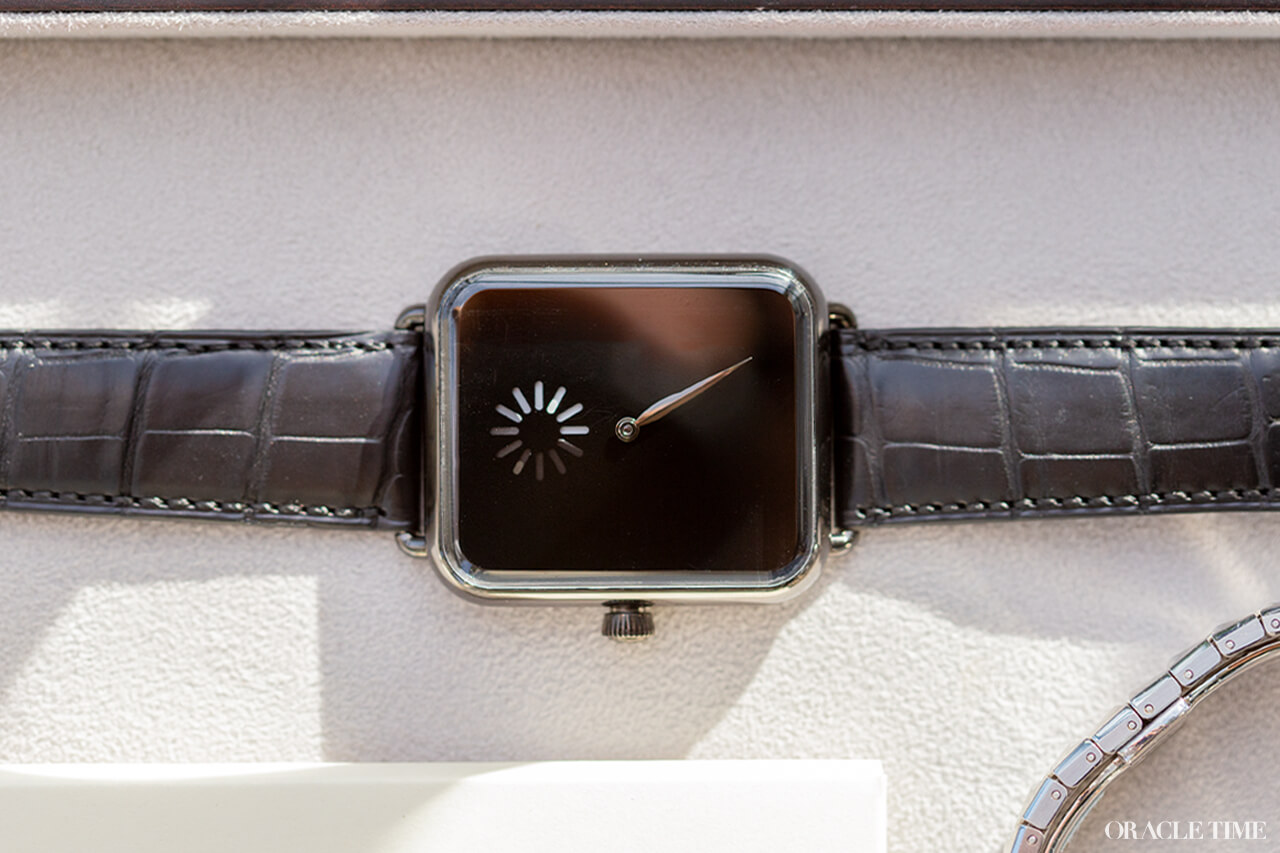 The only bit of contrast on the dial is the small seconds at 6 o’clock which you might well have mistaken for a buffer symbol. While it breeds the kind of frustration fomented over years of terrible internet connections, it’s painful and painfully cool in equal amounts.

More subtly, the case has been slightly redesigned to better integrate the sapphire crystal, bringing it closer in line with the sleek, pebble-smooth look of the Apple watch. It’s also been given a black DLC coating, which has nothing on Vantablack but still gives the whole thing a more cutting-edge look than steel. 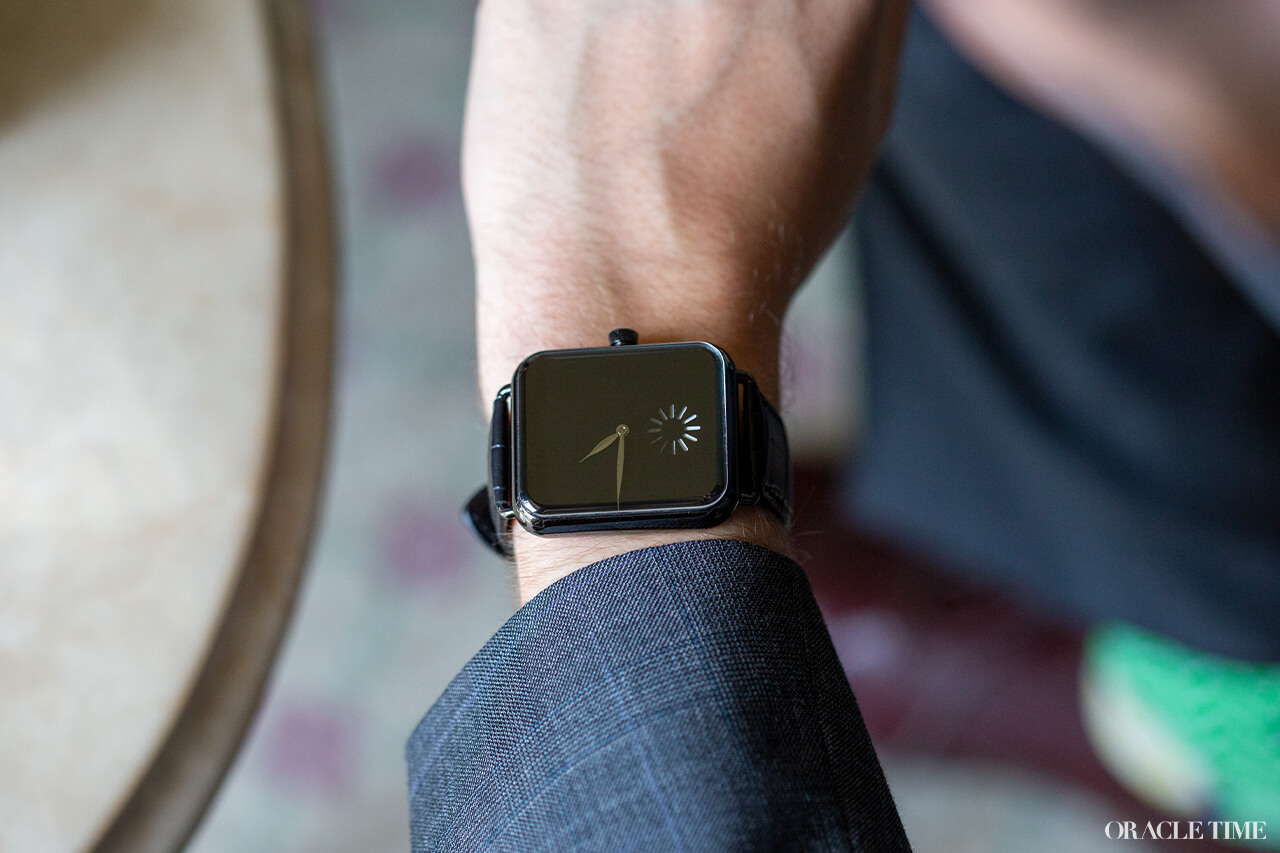 On that note, please note that the images we have here were taken way back at Geneva Watch Days in August, making the Final Upgrade pictured a prototype. There shouldn’t be any noticeable changes, but who knows with these things?

One thing that won’t change is how it wears, which is to say fantastically. If there’s one thing I like about the Apple Watch, it’s how comfortable it is. Given Moser’s version is an 38.2mm x 44mm mirror, it feels equally great. Plus, black goes with everything – provided you want to look more silicon valley than Mayfair. 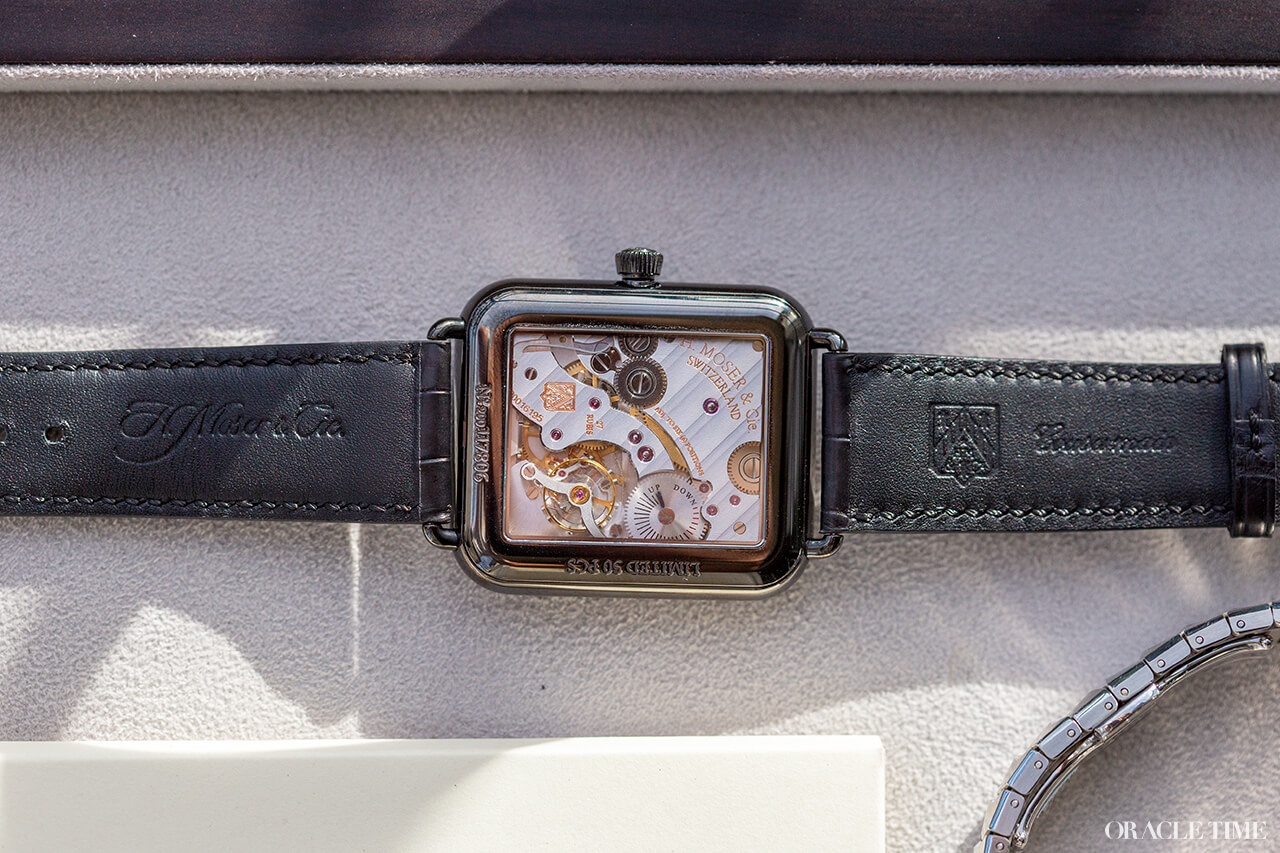 The illusion ends at the exhibition caseback, which shows off the HMC 324 calibre manual-wind movement and it’s 100-hour power reserve. As you’d expect, it’s beautiful, finished to within an inch of its metal with cotes de Geneve, a gold escapement and plenty more to keep you staring. Fortunately there’s no planned redundancy here; this is an heirloom.

That all said, if there’s one thing that’s going to tip you over into plumping for the Final Upgrade, it’s the pure, blissful satisfaction of someone mistaking what it is: “Is that an Apple Watch?” Aficionado – February 2021: The Coolest Things In The World Right Now Our Favourite Retro-Inspired Watches of 2020