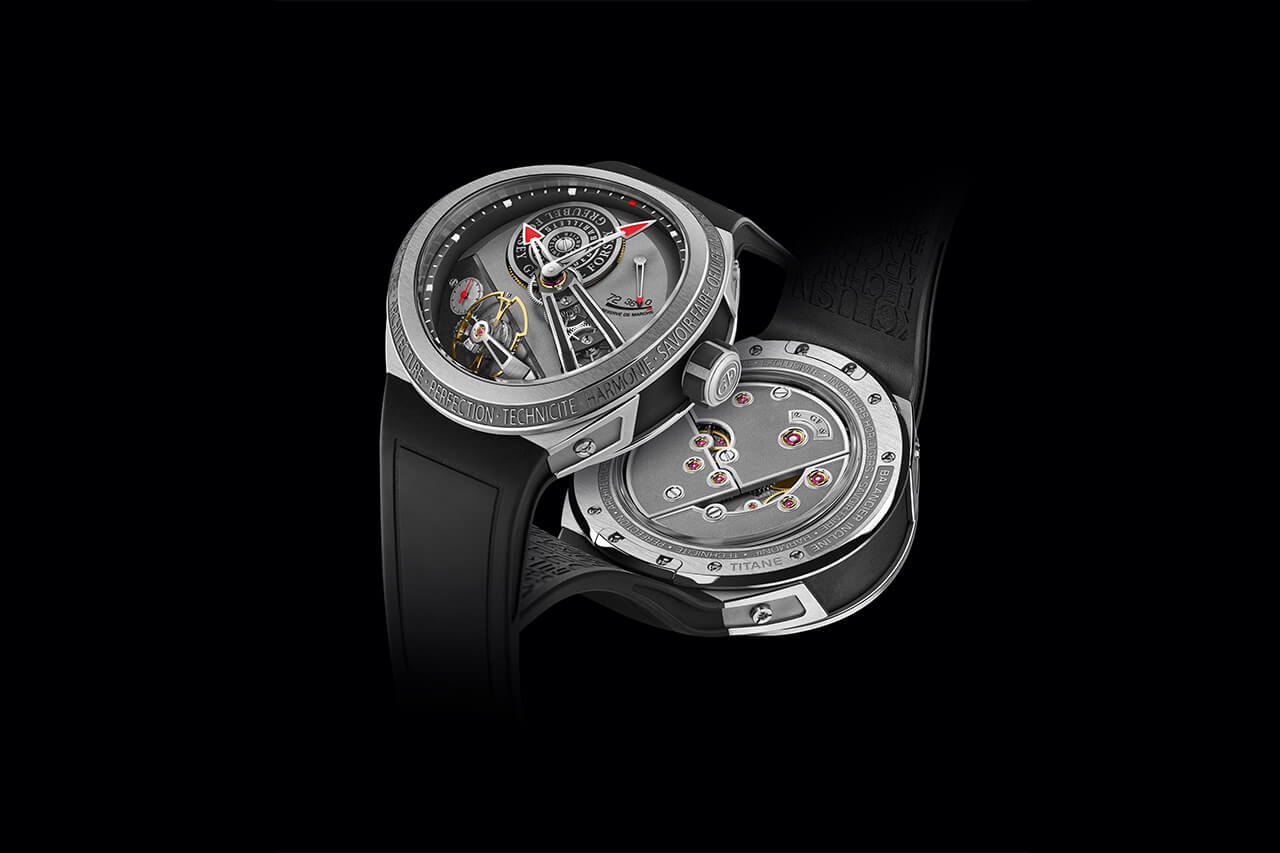 Where does your mind go when you think of the term ‘sporty’ in relation to watchmaking? Maybe a rugged, oversized diver or a lightweight Richard Mille on the wrist of grand slam champion? Until late last year the studious, academic output of watchmakers Greubel Forsey wouldn’t have been high on anyone’s list of sporty watches. But then they dropped the GMT Sport and confounded those of us who thought we had the brand pegged.

It featured the same impeccable watchmaking, namely a 24-second tourbillon (inclined, naturally) with an extraordinarily visual GMT system, but housed in a totally new movement and curved titanium case with elliptical sapphire crystal and secured on a rubber strap, all of which simply hugs the wrist. It was a bold turn from the Chaux-de-Fonds atelier but one that seems to have resonated with its customers as a second, similarly curved watch, now bearing the new designation S, has arrived. Welcome the Greubel Forsey Balancier S. 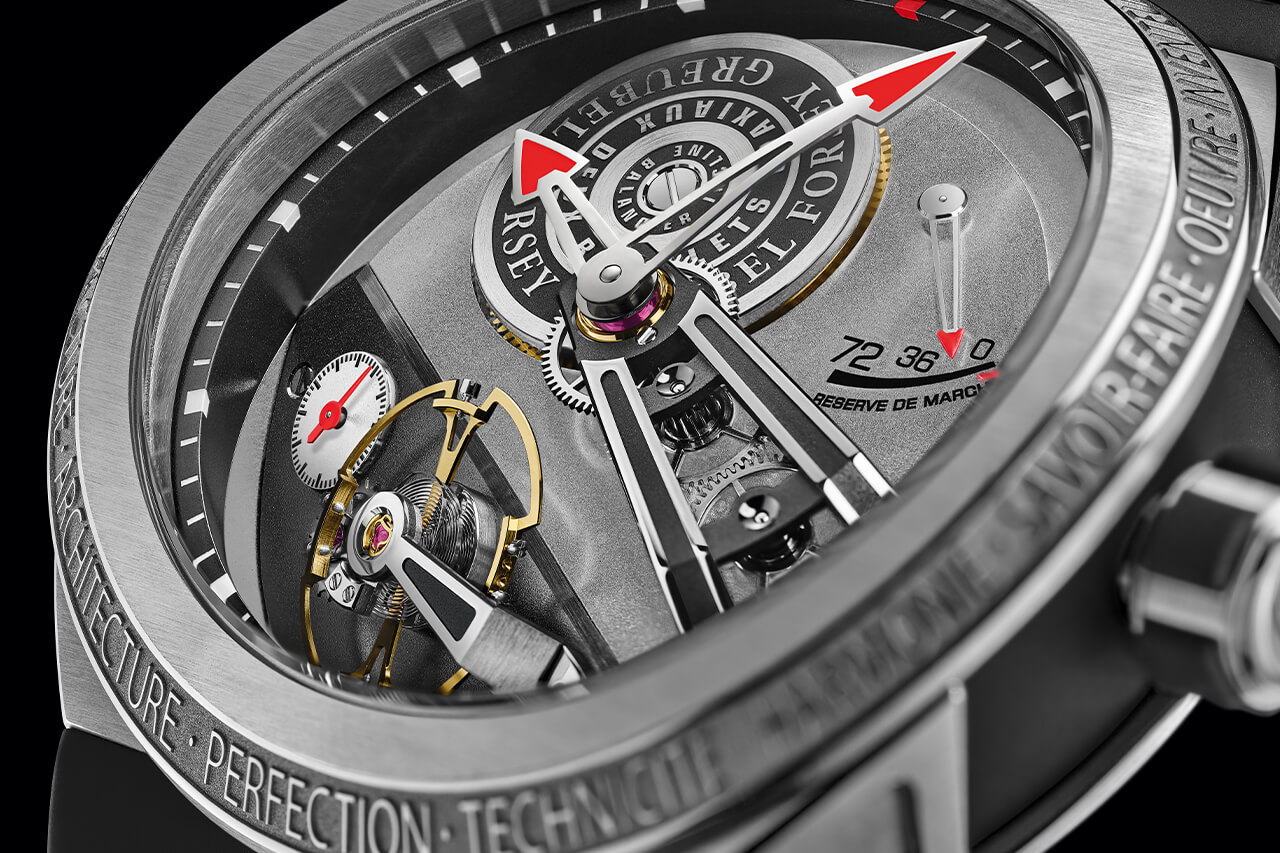 This piece is time-only, with the focus being the unusual, irregularly faceted surface of the dial and the titular balance wheel which measures a not insubstantial 12.6mm and uses the 30° slope of one of these facets to provide an inclined mounting for improved chronometry, a signature feature of Greubel Forsey’s watches. The depth at which the dial is mounted within the case and the fact that so much of the watch’s aesthetic stems from how much empty space is lavished on framing each feature brings to mind GF’s much earlier Invention Pieces.

As with the GMT Sport, the hour and minute hands have been curved to accommodate the form of the sapphire crystal and are mounted at the peak of an open-worked cock that rises above the centre of the dial and serves as a trellis for the watch’s motion work wheels to climb. There is a power reserve indicator at the three o’clock position and next to that the outline of the mainspring barrel, relief-engraved with text. The Balancier S features twin coaxial, series-mounted barrels good for 72 hours of power reserve. 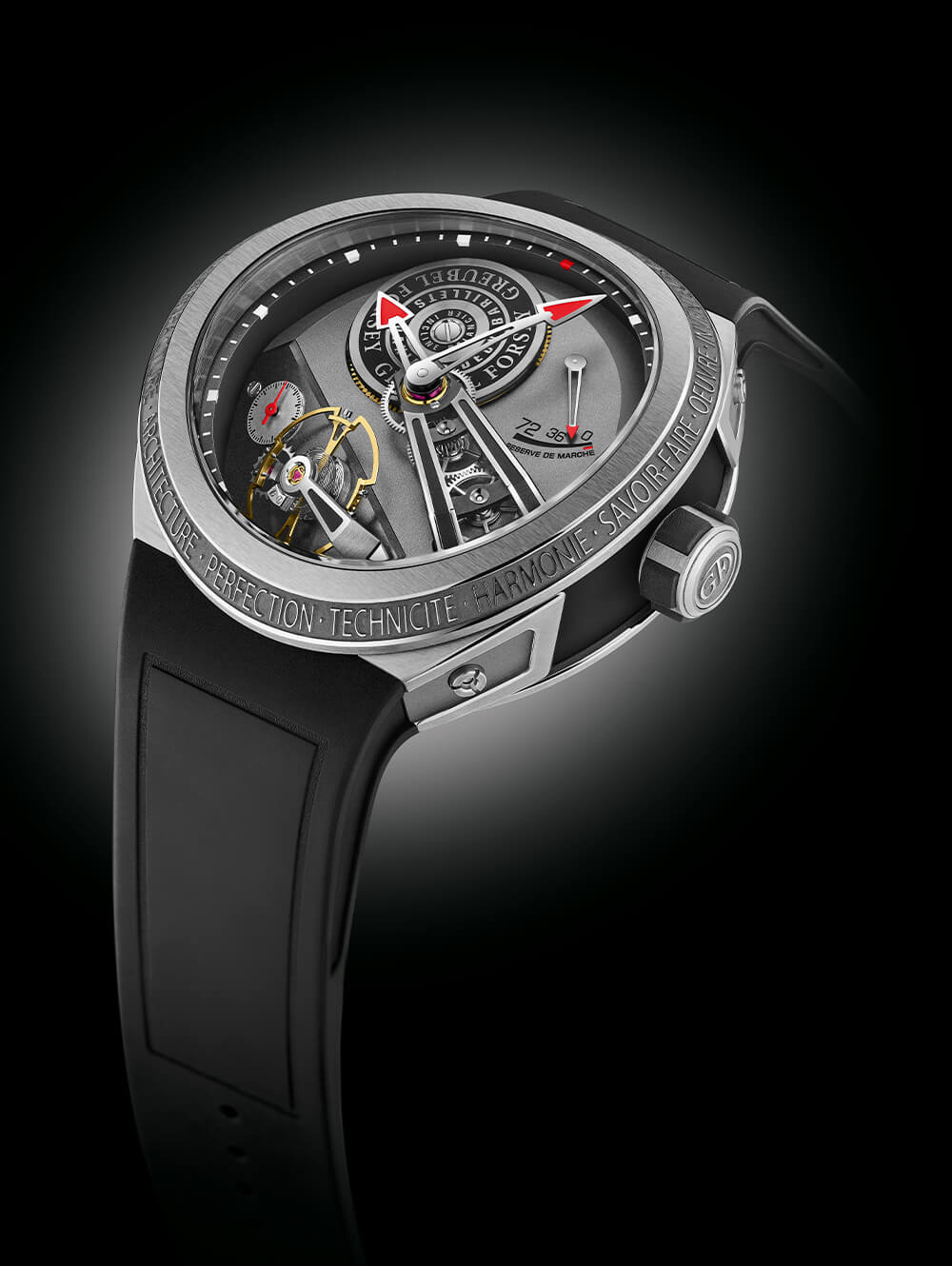 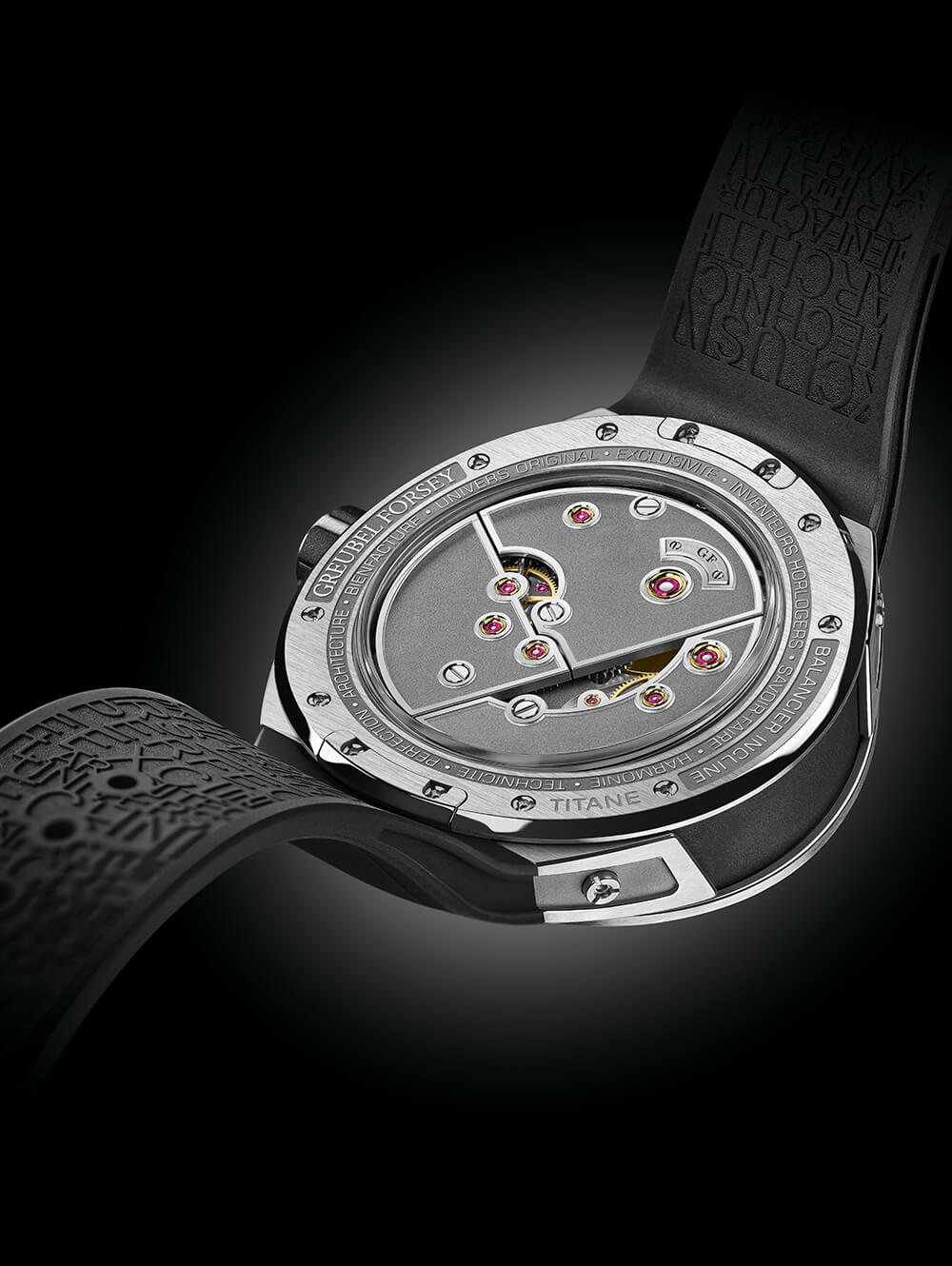 On the final facet is a small seconds and the balance wheel, so comparatively large that it juts up over the facet’s edge whilst oscillating at 21,600vph, inhabiting the considerable empty space between the dial’s surfaces and the sapphire crystal. While the Balancier S matches the GMT Sport’s 45mm case (both in diameter and use of titanium) the new watch is more than 2mm slimmer and the lack of complications has allowed the movement to be made 3mm slimmer which permits all of this negative space, making a nice counterpoint to the GMT Sport, which is packed to the gunwales. 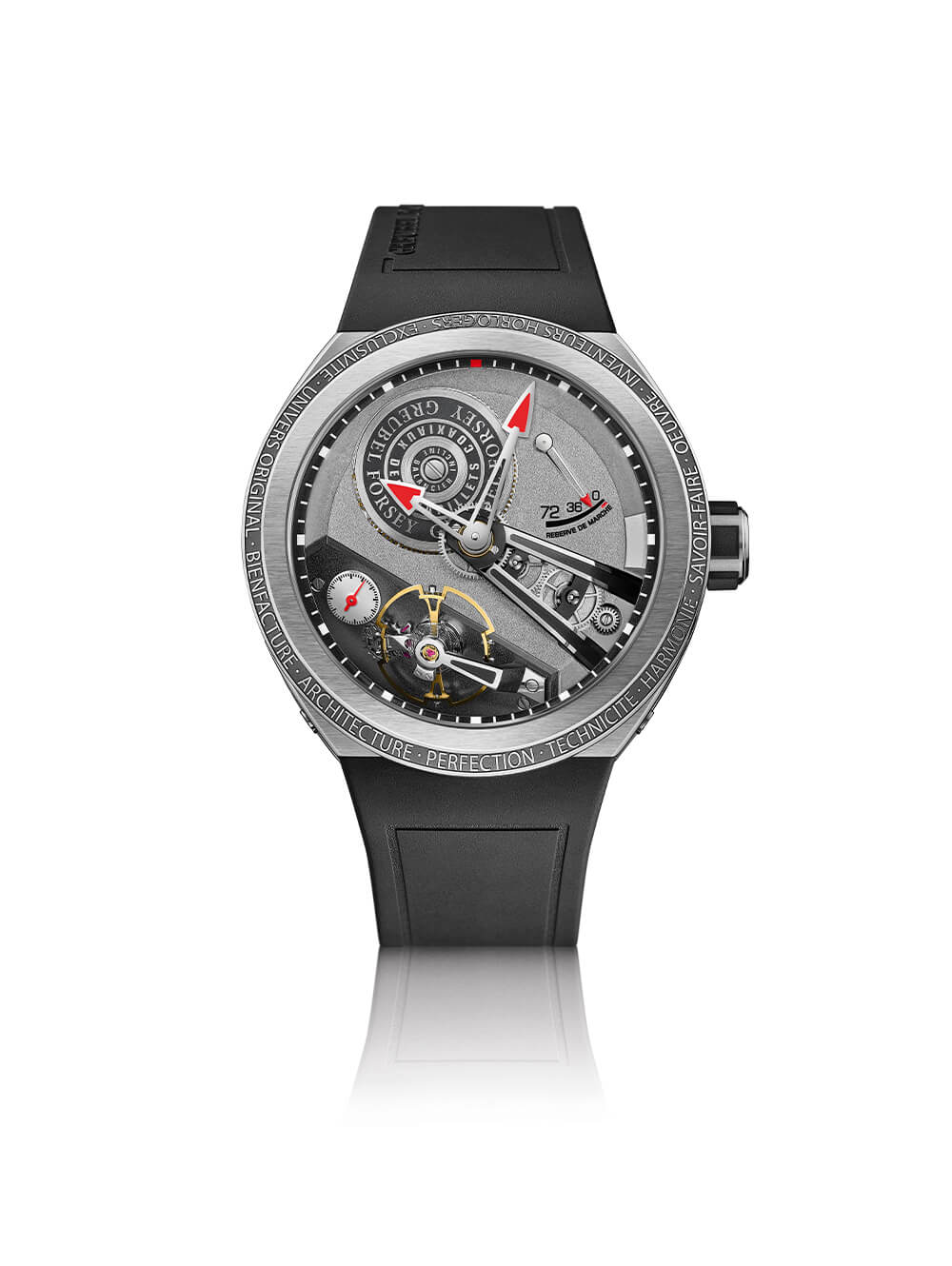 Watchmaking of the Greubel Forsey calibre is not normally meant to get wet but the Balancier S lives up to its sporty nomenclature and also manages to keep water out down to depths of 100m, which should be more enough for a dip in the pool… of the owner’s megayacht.