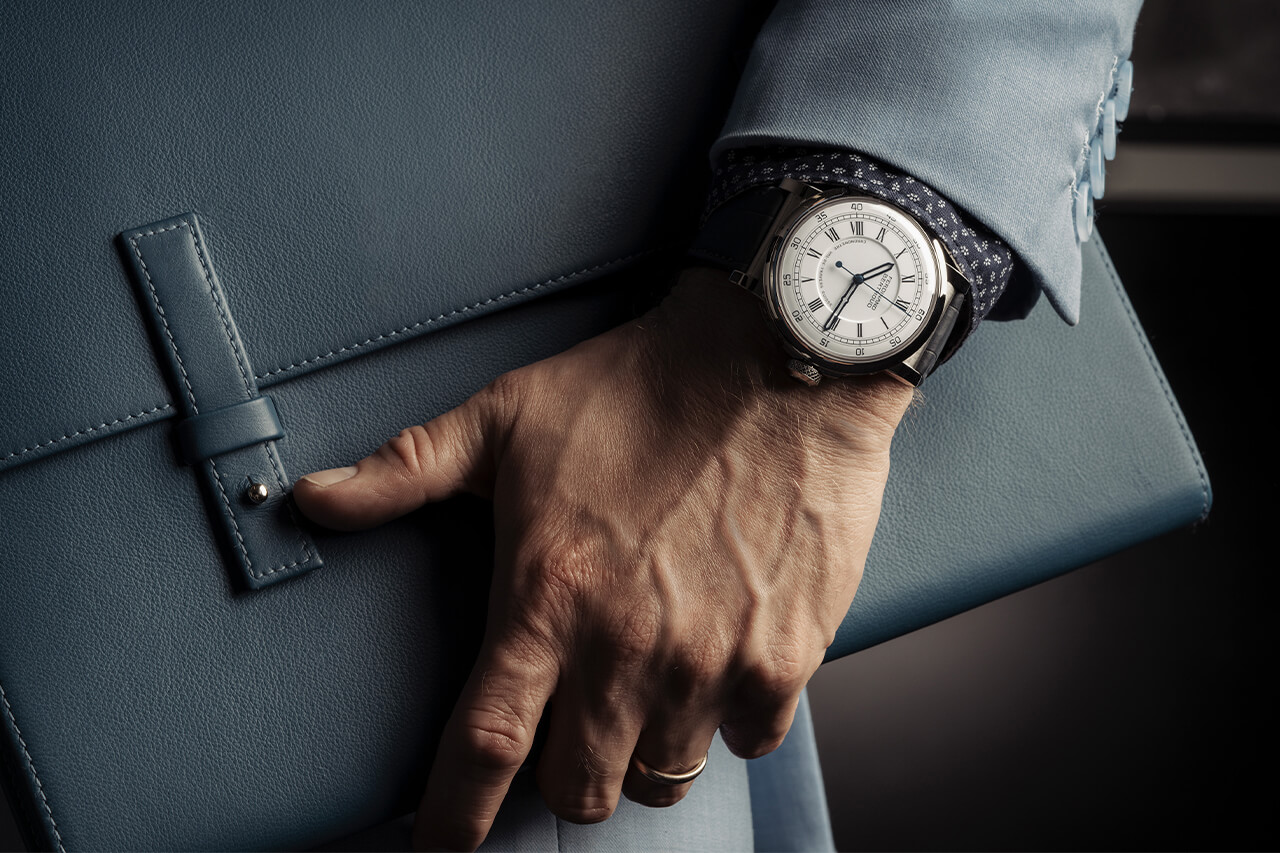 The accuracy of mechanical watchmaking relies heavily on the force supplied to the escapement by the mainspring. A regular or constant force, will help ensure regular, uniform oscillations of the balance wheel and thus enable a watch to exhibit uniform timekeeping properties. Unfortunately, it is the nature of a standard mainspring to output irregular levels of torque as it unwinds, more powerful at first when tightly wound around its arbor then decreasing in output as it unwinds becoming slacker. 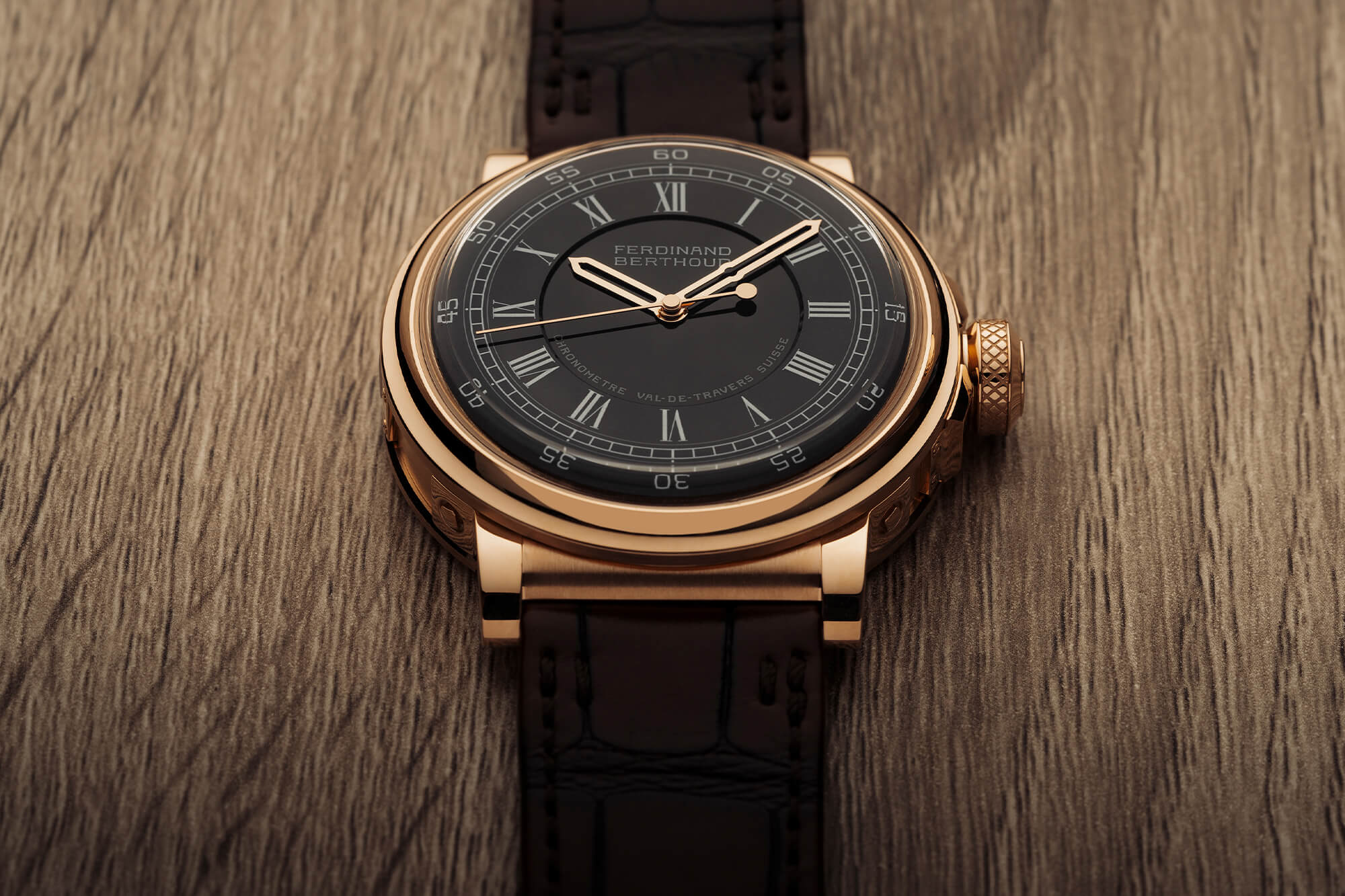 Achieving a ‘Constant Force’ has been a horological holy grail for centuries with a number of ingenious solutions discovered along the way. Ferdinand Berthoud himself frequently used a Fusée system, a threaded cone-shaped pulley with chain (or more commonly gut cord) attached to the mainspring with the shape of the Fusee serves as an ‘equal and opposite’ gearing, compensating for the irregular output of the mainspring. If we were discussing any other form of power supply, we would probably call such a system a filter. Today’s Ferdinand Berthoud, a marque honouring the 18th Century Swiss watchmaker launched by Chopard’s Karl-Friedrich Scheufele in 2015, has made the Fusée-and-Chain its signature. 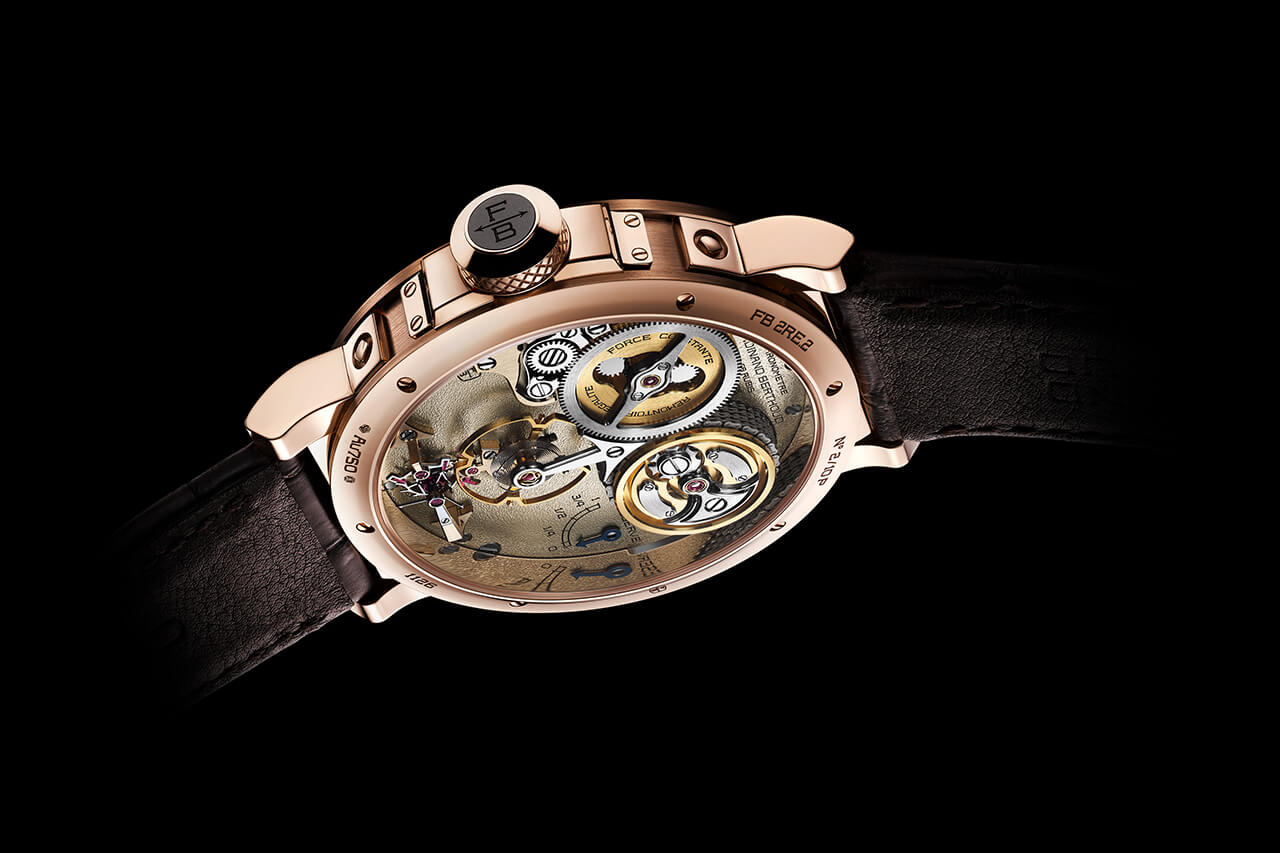 However, for its latest watch, the FB 2RE, ‘simply’ using the Fusée-and-Chain was not enough and a second Constant Force mechanism has been added into mix. The remontoire is a secondary, isolated source of power for the escapement positioned between it and the gear train which sees a hairspring charged by the mainspring and periodically released (in this case every second), thus negating the impact of the mainspring’s irregularities. A remontoire has the added bonus of allowing for True or Dead Beat Seconds.

So here Ferdinand Berthoud is both cleaning up the output of the mainspring with the Fusée-and-Chain and then refining the power supply coming into the escapement at the other end of the gear train further by using the remontoire, belt and braces. It may well exist but I can’t think of a watch, pocket or wrist, that uses both of these mechanisms simultaneously, it’s incredibly impressive and, for once, I’d actually be interested in looking at a graph of the FB 2RE’s timekeeping accuracy over the length of its entire power reserve. 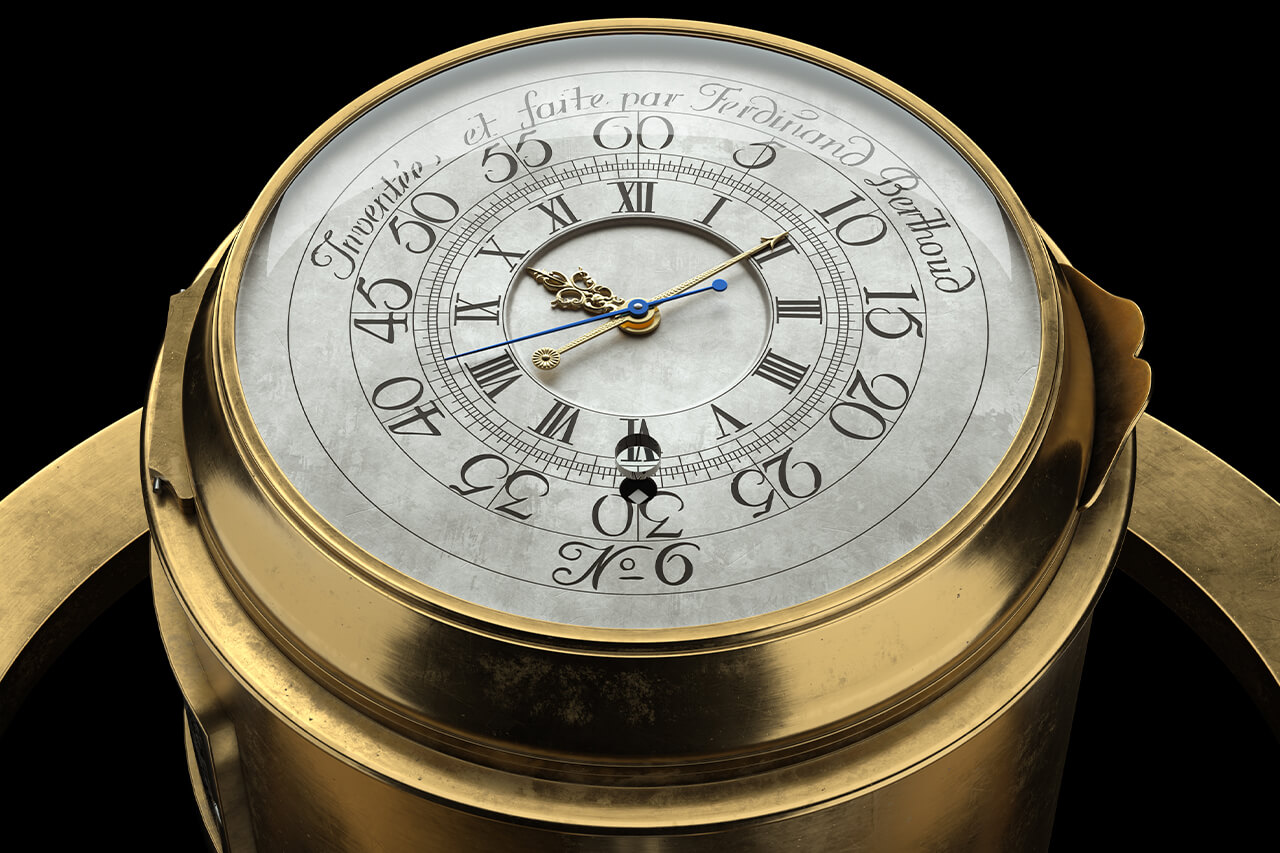 The FB 2RE has been produced to mark the 250th anniversary of Berthoud being named ‘clockmaker and mechanic by appointment to the French King and Navy’ in 1770 following successful sea trials of Berthoud’s Marine Chronomèters No. 6 and No. 8, that began two years before as part of the ongoing challenge to determine Longitude whilst at sea. The new watch takes its inspiration specifically from Marine Chronomèter No. 6 with a two-level Grand Feu enamel dial. These are notoriously difficult to make as two dial blanks must first be fired separately, then carefully cut to shape and finally soldered together and polished. It’s a fraught process with numerous potential pitfalls (enamel is after all incredibly delicate glass) resulting in many, many hours of work wasted if even the slightest error is made. 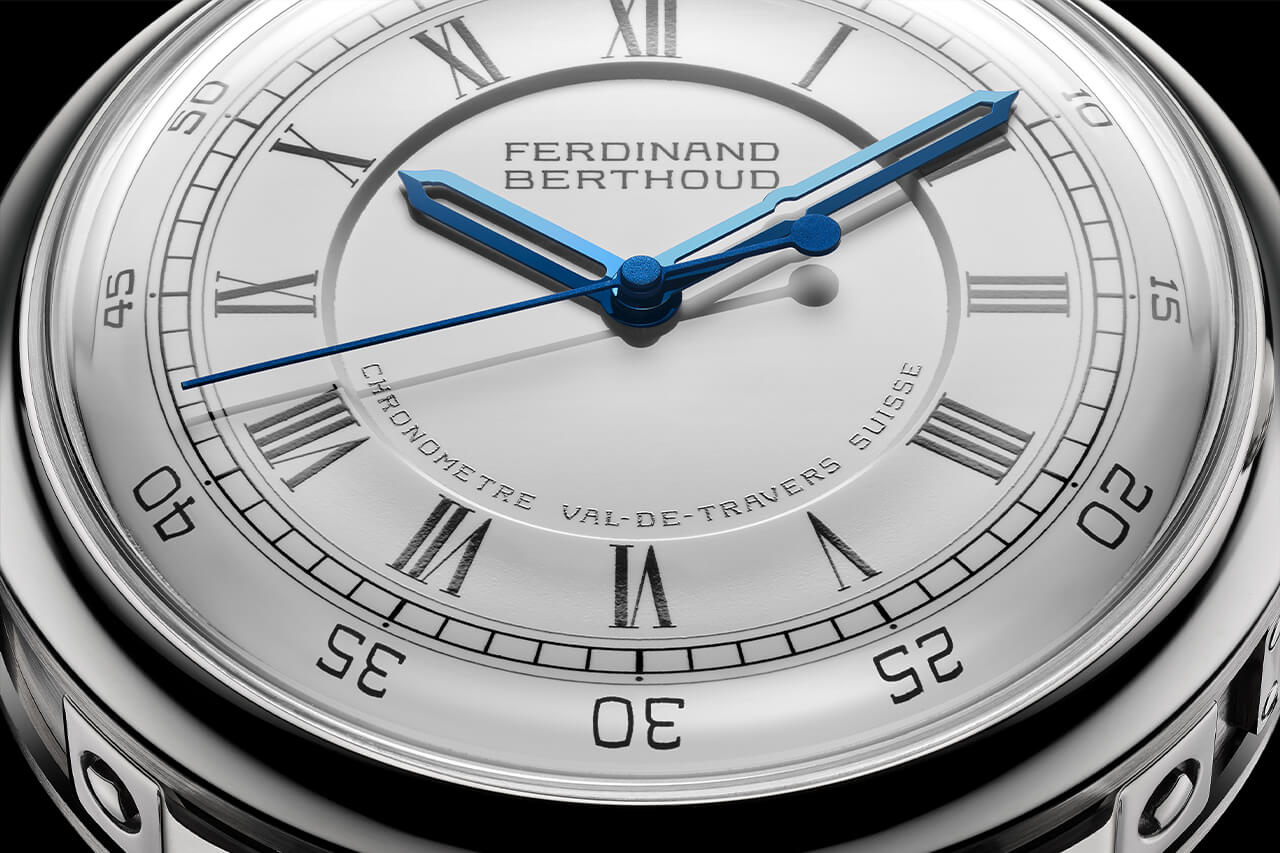 Given its specific inspiration it’s also not the kind of watch we’re accustomed to seeing from Ferdinand Berthoud, its 44mm case is round for a start (everything we’ve seen from modern FB has been a distinctive split hexagon) as Marine Chronomèter No. 6 was housed inside a round, gimble-mounted cylinder. The dial is also far less ‘instrumental’ and more conventional in its layout, a Roman numeral hour track running around the central recessed portion of the dial with Arabic numeral five-minute indices at the dial’s edge, both in painted enamel. The modern Berthoud traits are still there though, the knurled crown and porthole window in the caseband offering a glimpse of the movement’s architecture both examples. 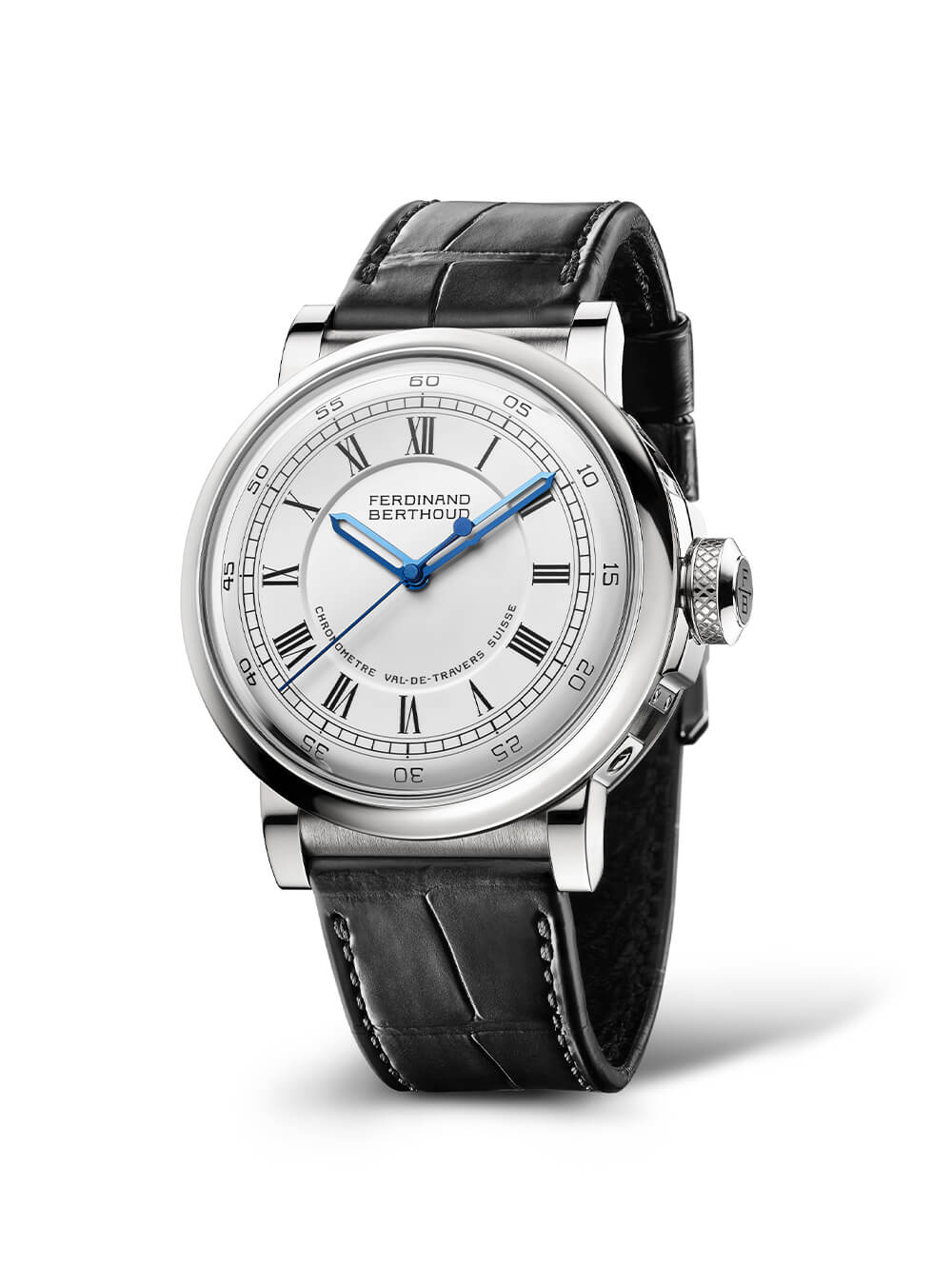 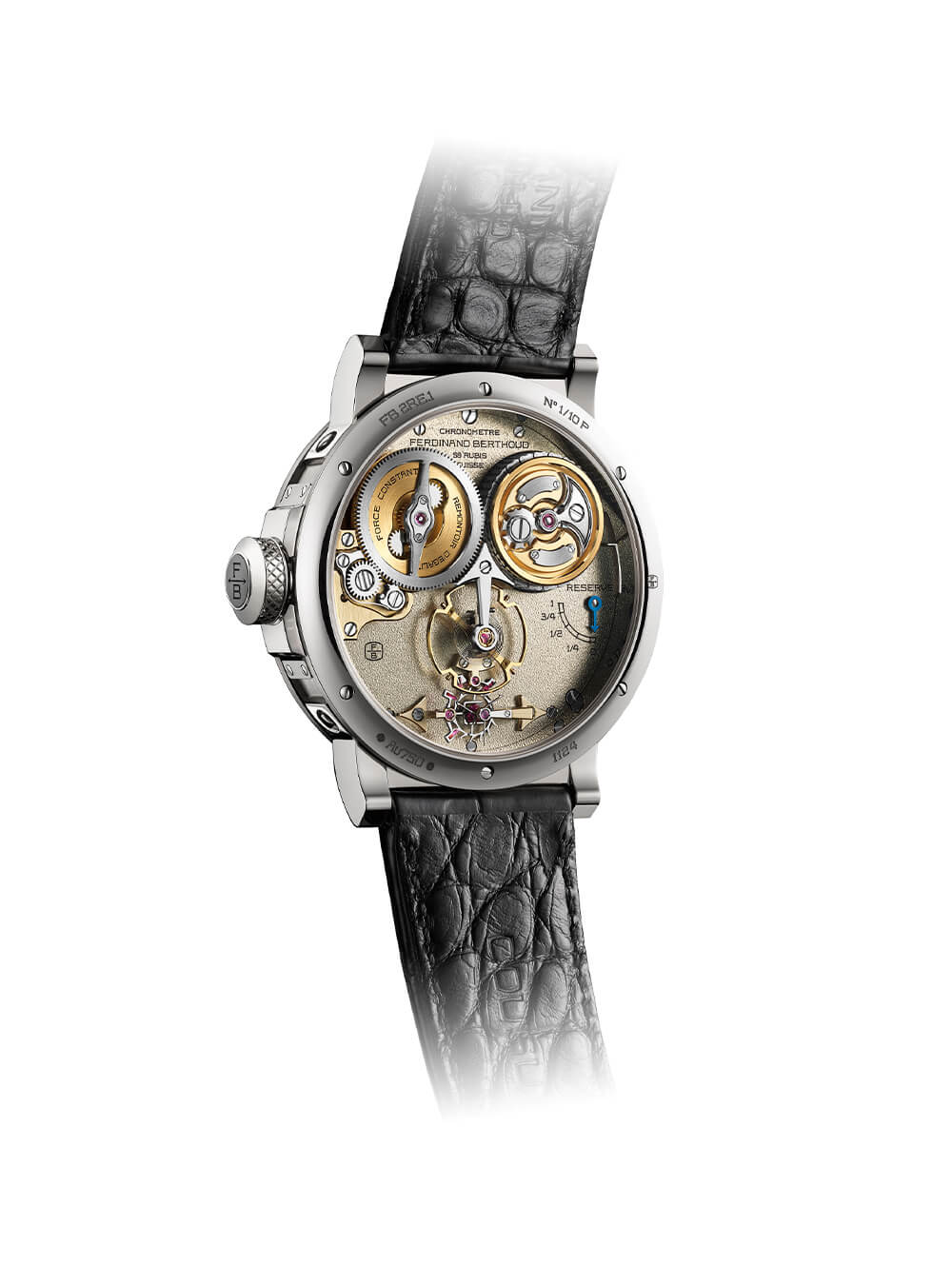 As crisp as the dial is, I certainly prefer the reverse view where a thin concave bezel holds a large sapphire crystal in place affording the main view of a frankly spectacular-looking movement exhibiting an exceptional level of decoration and finishing. The movement has been designed to offer pride of place to the mainspring barrel, fusee, balance wheel, escapement and power reserve on the same plane, with all other aspects of the movement hidden under a frosted plate. It’s a wonderfully theatrical piece of movement design.