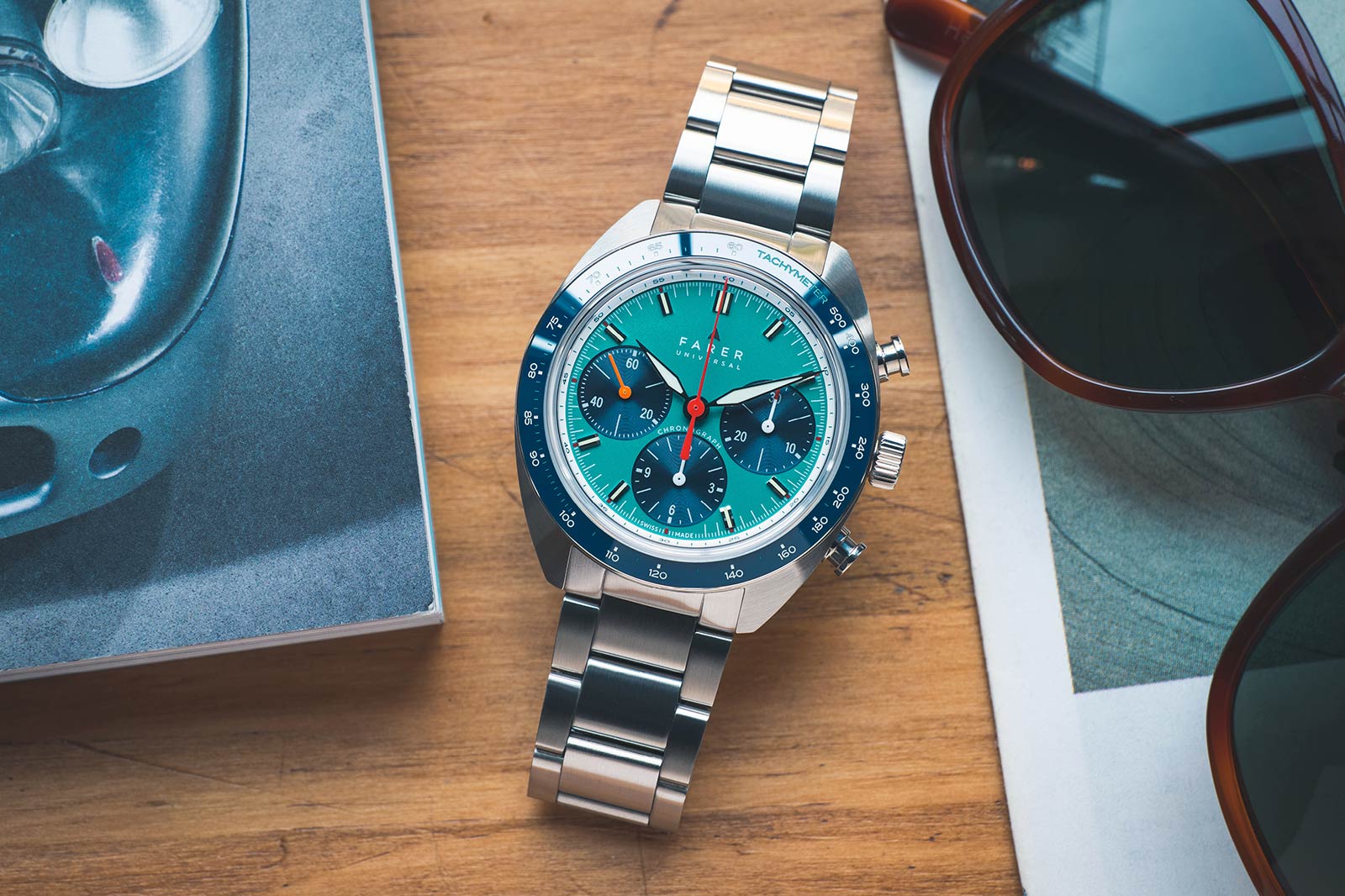 Farer are launching a brand new chronograph called the Carnegie to go alongside the existing Chronograph Sport collection and it captures the pure essence of racing chronographs. It has enough flair to make it stand out in the flash world of racing while retaining a sporty edge.

At a certain level this is a new version of the old Bernina Chronograph Sport, which is coincidentally getting a new production run as well, and celebrates the Bernina Gran Turismo – a famous race over the Swiss Alps during the 1920s and 30s.The retro inspiration is evident in the cool matte teal colouration of the dial, which is punctuated by the three recessed chronograph subdials in blue with sunray finish for the small seconds at 9 o’clock, thirty-minute counter at 3 o’clock and twelve-hour counter at 6. 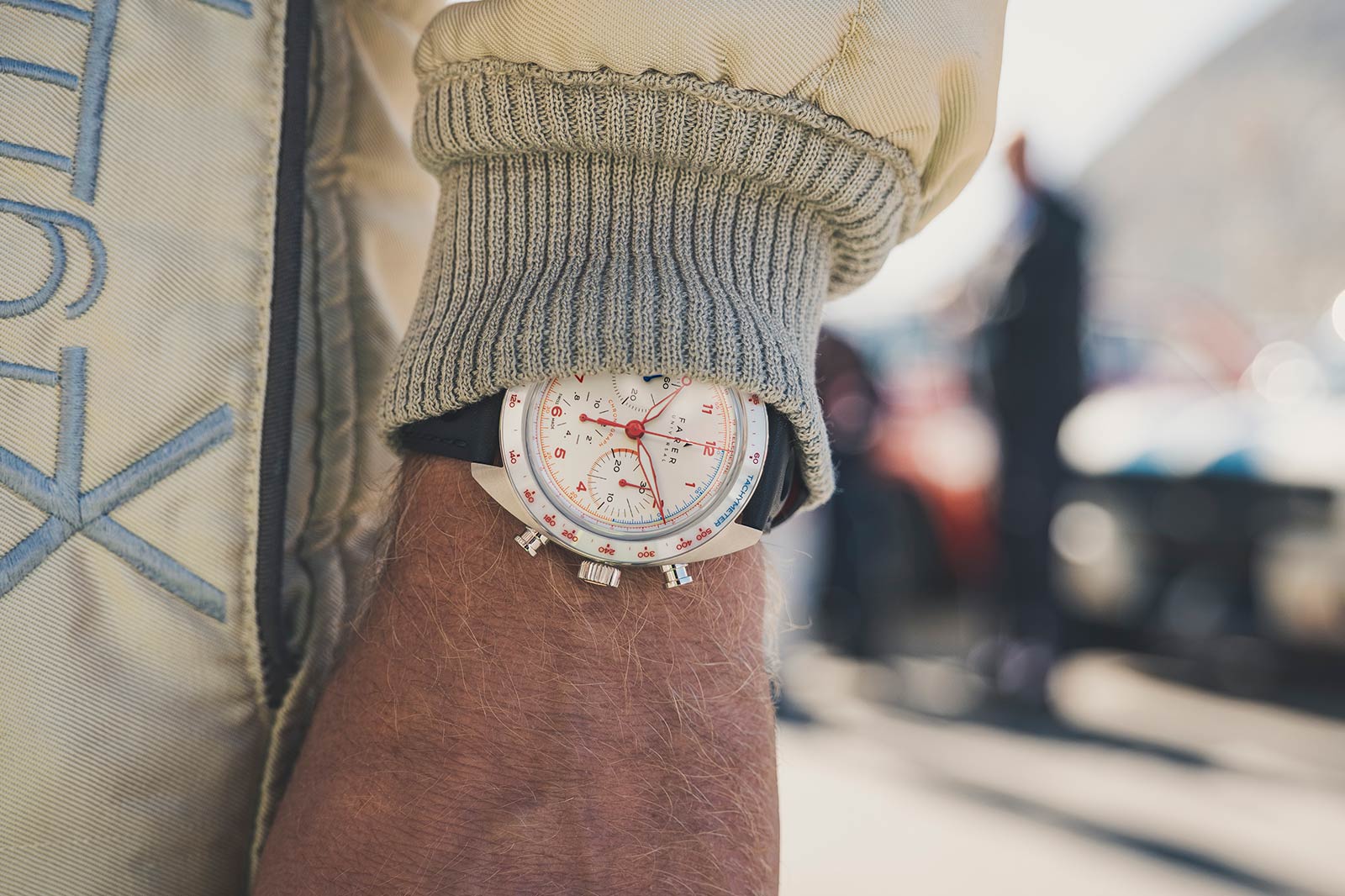 Dominating the face is the large, bright red chronograph hand that contrasts strongly to the cool tones of the dial. It looks like it’s revving up on the starting line ready to set off up the mountain roads towards St Moritz, kept company by the hour and minute hands that are lume filled and in the dauphine style. 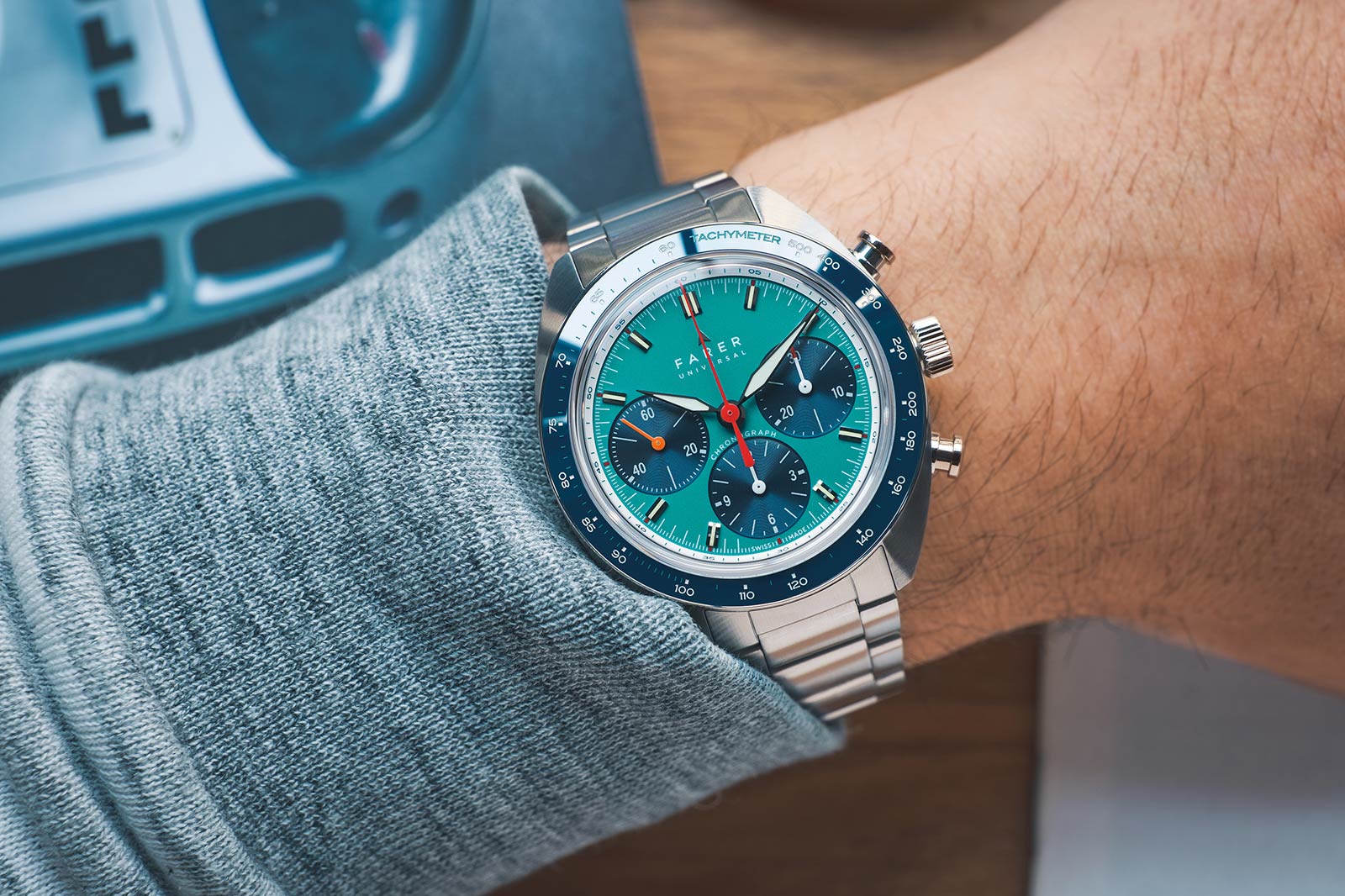 Keeping the level of detailing high is the white, angled seconds track that provides a nice visual break between the dial and the bezel, which is also blue and made from ceramic. The bezel itself is engraved with a tachymeter so you can have all those speed calculations handy. It’s mounted on a brushed stainless steel case that measures 41mm in diameter, making the Carnegie a good size for readability without compromising on comfort. 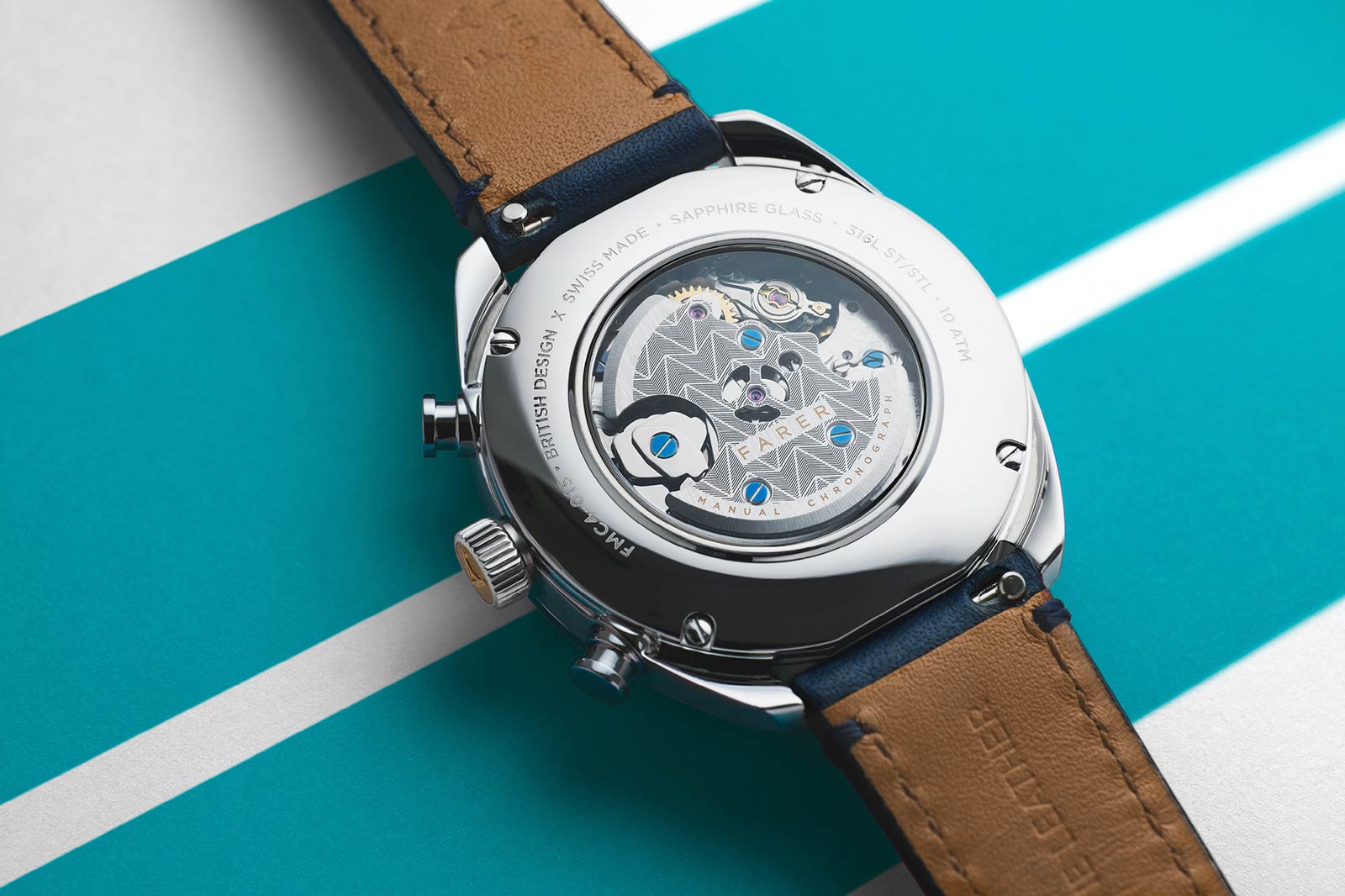 Under its sapphire crystal display caseback you can see the Sellita SW510 BH Elaboré grade manual movement with an above average 58-hour power reserve. The real kicker is the bespoke Farer monogram chequer pattern that looks cool alongside the perlé finishing and blue screws. That Farer branding has also gone into the bronze cap on the crown. 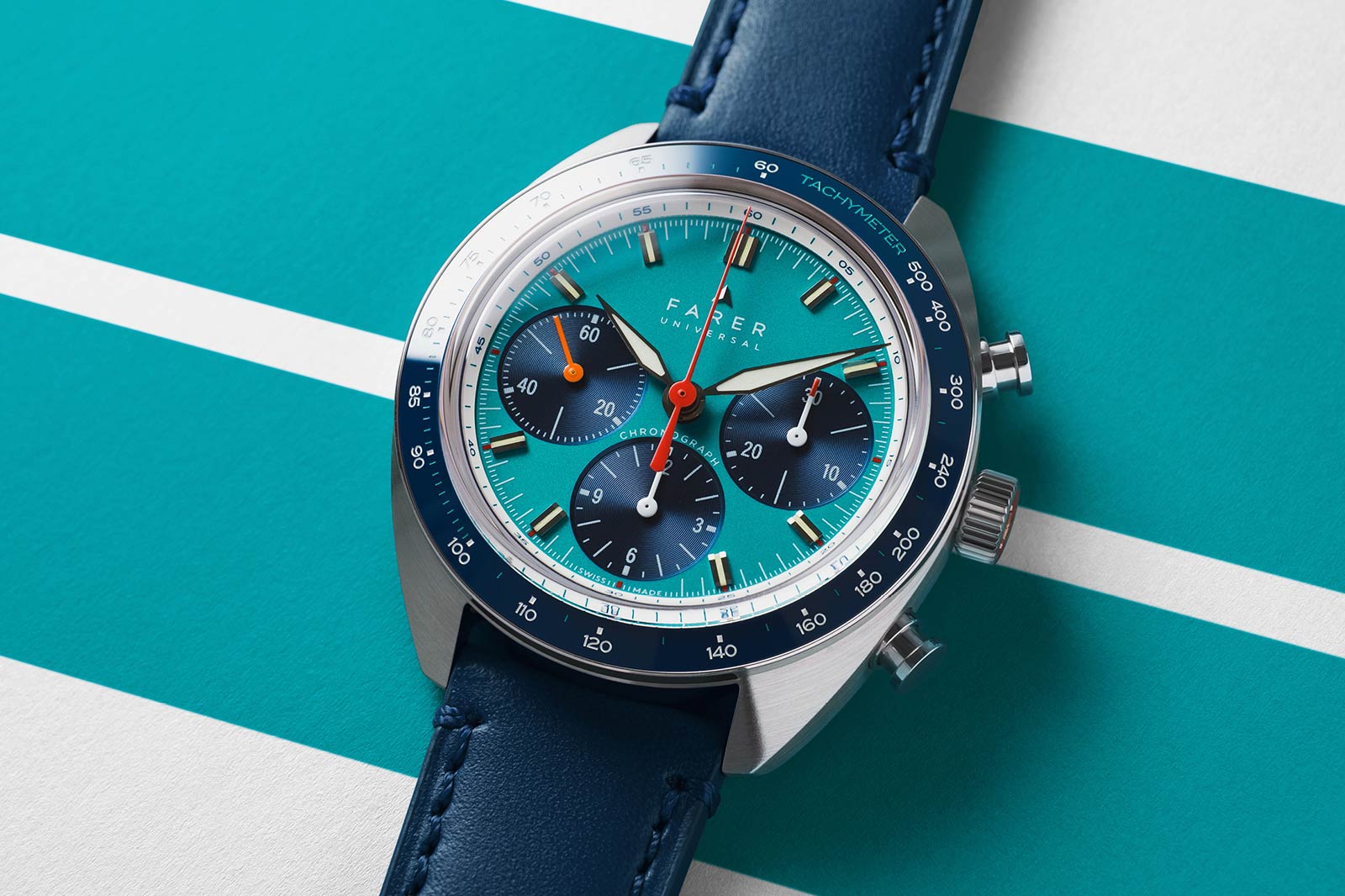 The complete picture is one of an attractive chronograph that wears its Farer heritage proudly. It’s a nice addition to the Chronograph Sport range, the characterful teal giving it a unique appeal that means it’ll be sure to draw attention at any classic car event, which is it’s natural home. And assuming it has a similar price to it’s counterparts it’ll be nice and accessible too at £1,680.