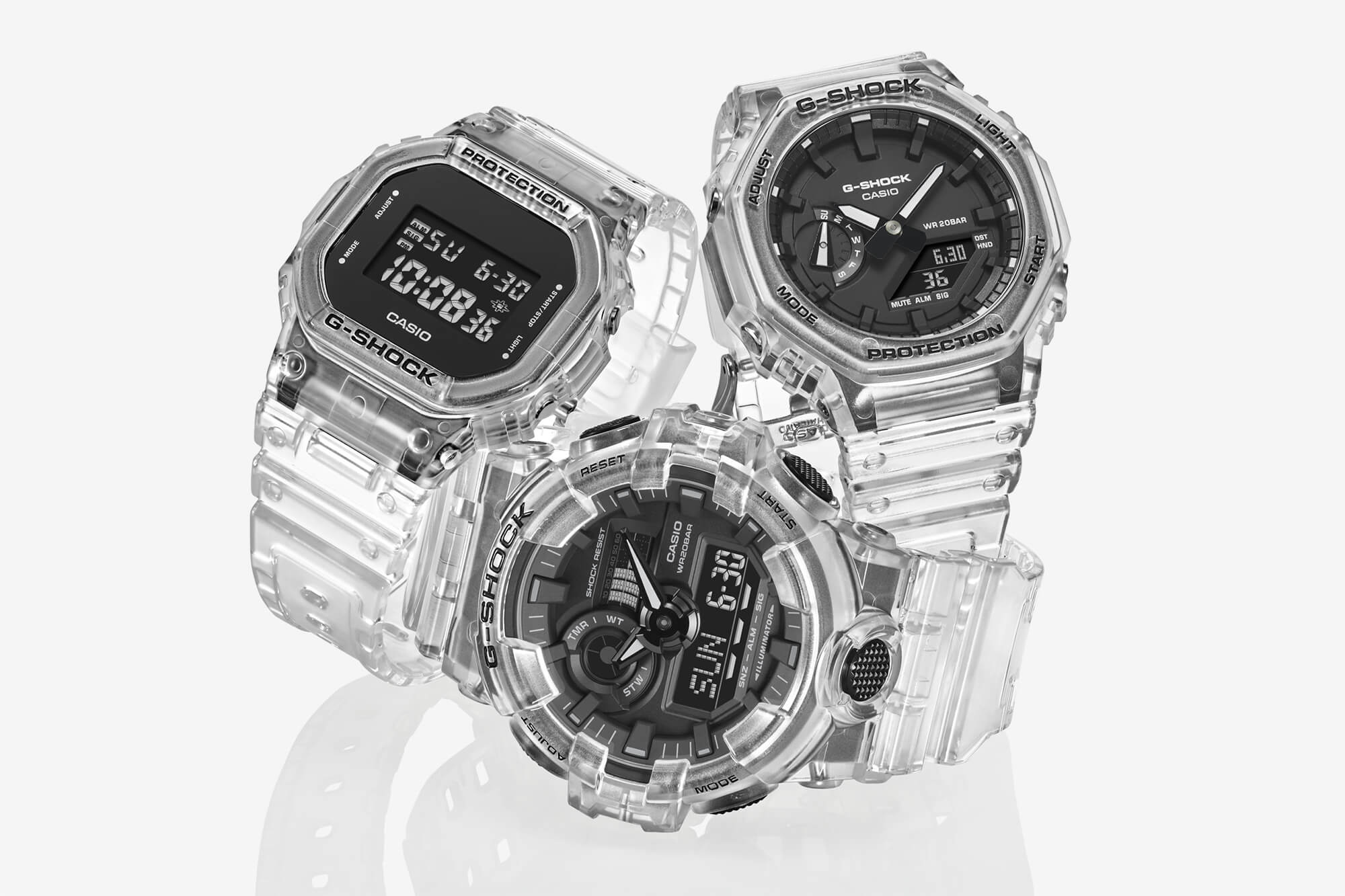 Casio, knowingly or not, has somehow always adhered to the rule of cool, creating watch designs that are always uniquely identifiable and inherently functional. It was no surprise then that in 2019 the distinctively shaped G-Shock GA 2100 exploded onto the scene and quickly earned itself cult status amongst the watch community. Fuelled by the combination of Casio’s strong brand identity and it’s similarities to a genuine watchmaking icon, the Audemars Piguet Royal Oak. It’ an obvious recipe for success and has earned itself a worthy nickname: Casio + Royal Oak = CasiOak. Adding an extra layer of cool, it’s now available in a skeletonised variant, alongside 5 other pieces that got the same treatment.

To understand the popularity of the GA 2100 it helps to understand the Royal Oak. First released in 1972, it broke all the conventions of the time and was highly disruptive within the industry. Designed by Gerald Genta, its octagonal bezel became instantly recognisable as a premier symbol for the sport-luxe world, coveted by celebrities and collectors alike.

The G-Shock piece features an almost identical octagonal bezel, which is why it has garnered the nickname the CasiOak. But whereas a genuine Royal Oak can cost upwards of £27,000, the CasiOak is only around £100, a much more accessible price bracket for young people. Or for people of any age for that matter. 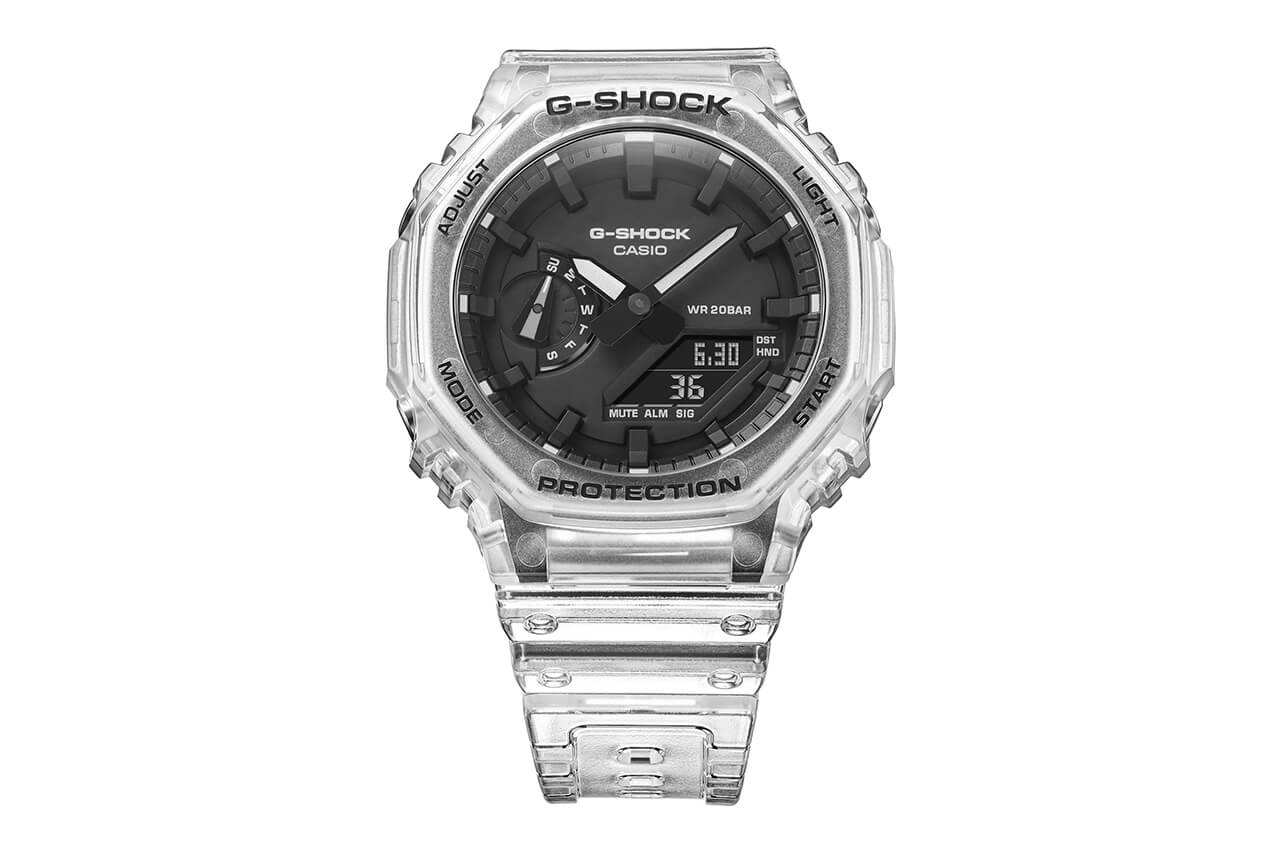 The new skeleton version has a similar price point at £109 but replaces the bold colours of the original with a ghostly translucent case and strap. It has a carbon core guard structure which provides extra shock resistance, ideal for a sporty, anadigi watch with multiple alarm and stopwatch functions. The CasiOak was already cool and this new version feels like its even cooler, edgier cousin.

The GA-2100SKE-7AER is the clear stand out from the range, the others in the collection riffing on similar themes with only slight differences. I think the collection would have been better off if it was limited to only two or three pieces but let’s take a look: 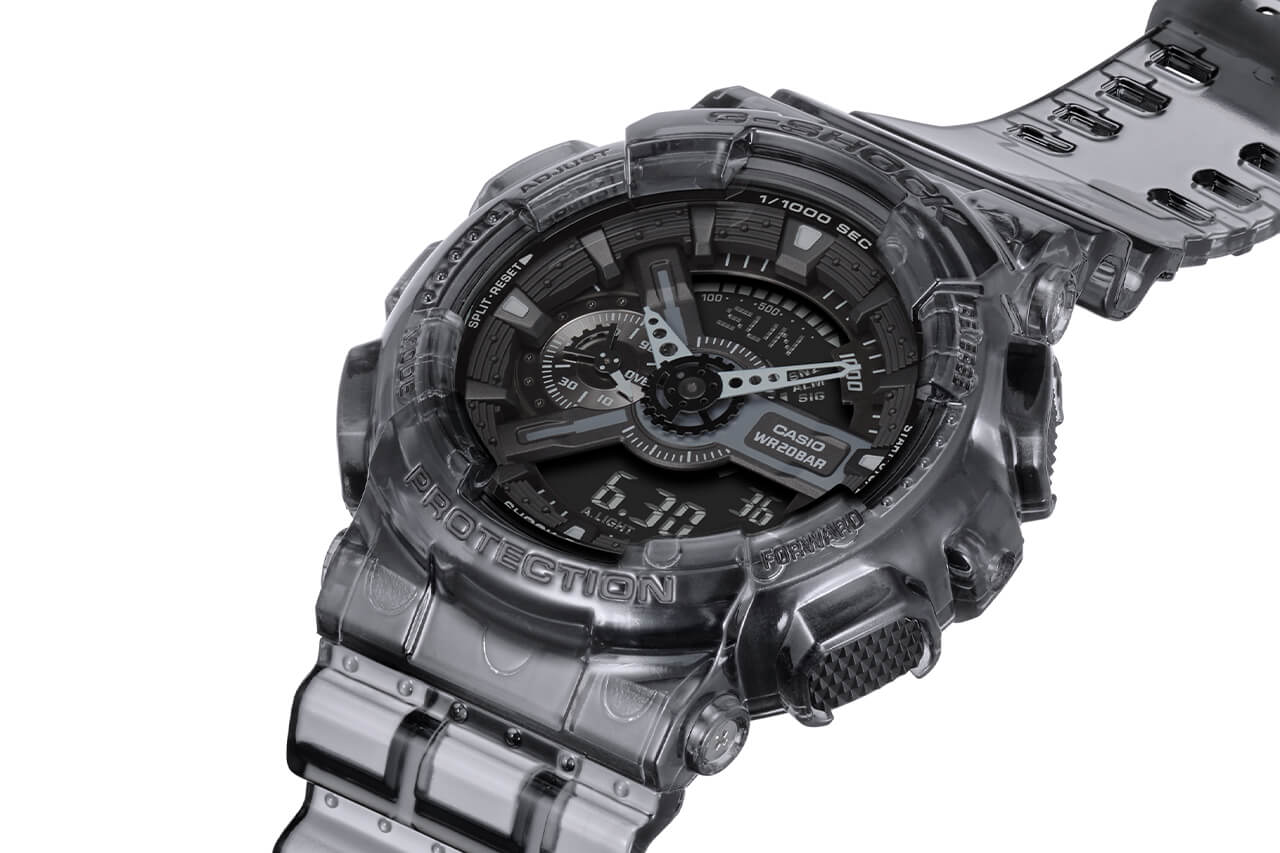 The first up is the GA-110SKE-8AER. It’s bulkier than the GA 2100 thanks to its over-sized textured buttons, which has a dramatic impact on the feel of the watch – it’s not quite as ghostly or ethereal despite its translucent strap. The rugged shapes make it seem more like a utilitarian workhorse of a piece, which it certainly is with a stopwatch, 100 Lap Memory, World Time, 5 alarms and 200M water resistance all built in. 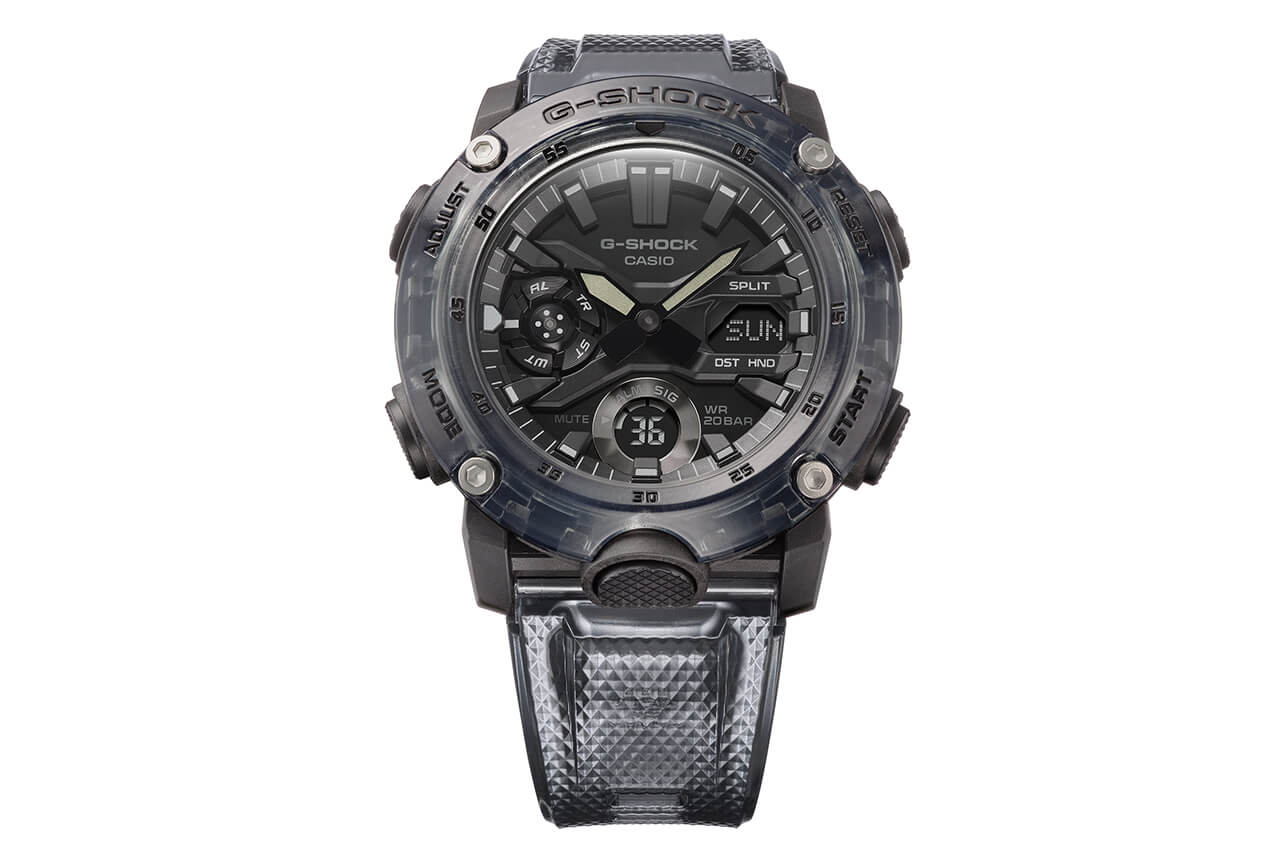 Second is the GA-2000SKE-8AER. This combines the functions of the 110SKE with the same carbon core structure as the CasiOak, making for a versatile watch. It has a dark grey translucent strap, like the majority of this collection, which is nice but not terribly exciting alongside the others. 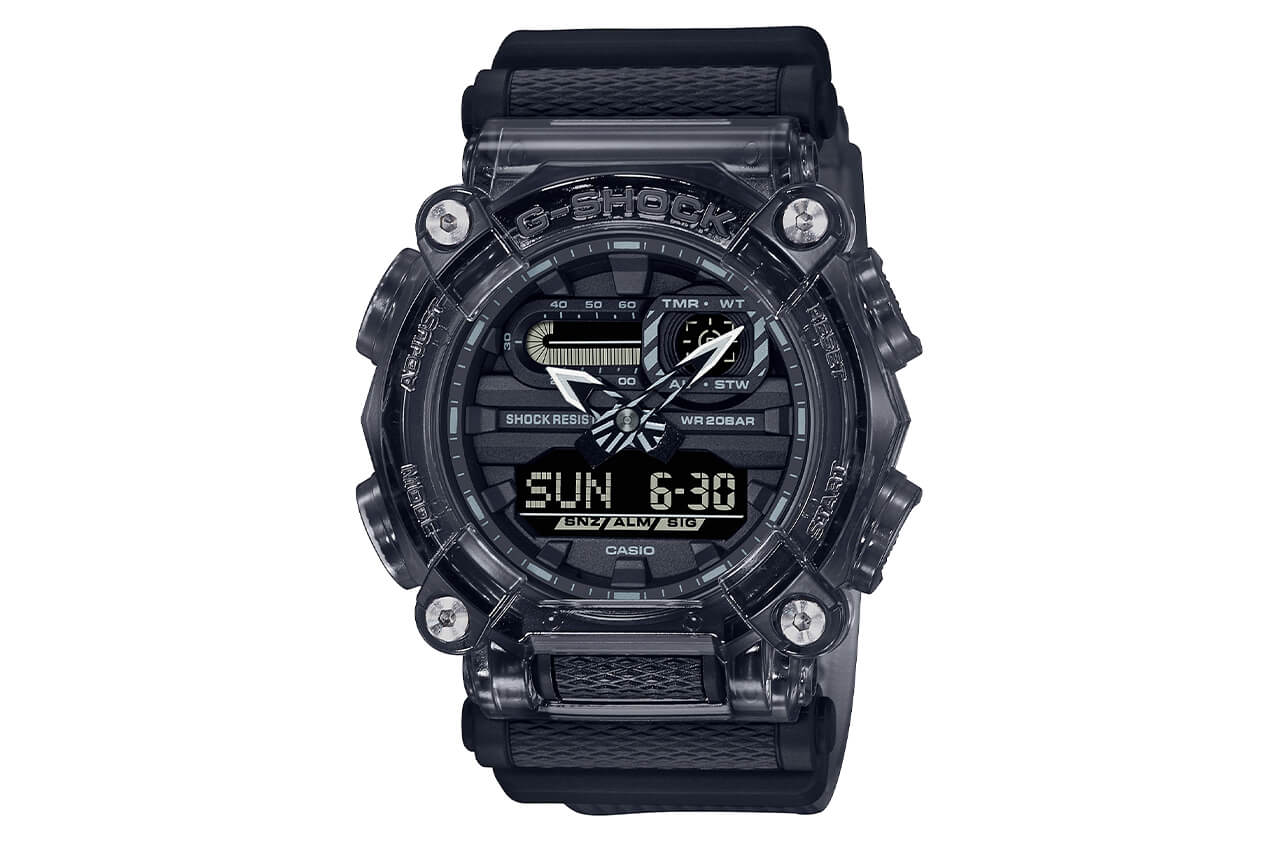 Next is the GA-900SKE-8AER and it features… more of the same. The primary difference between this watch and any of the others is that it was extra greedy when it came to the bezel and claimed ten sides for itself, even more than the CasiOak. 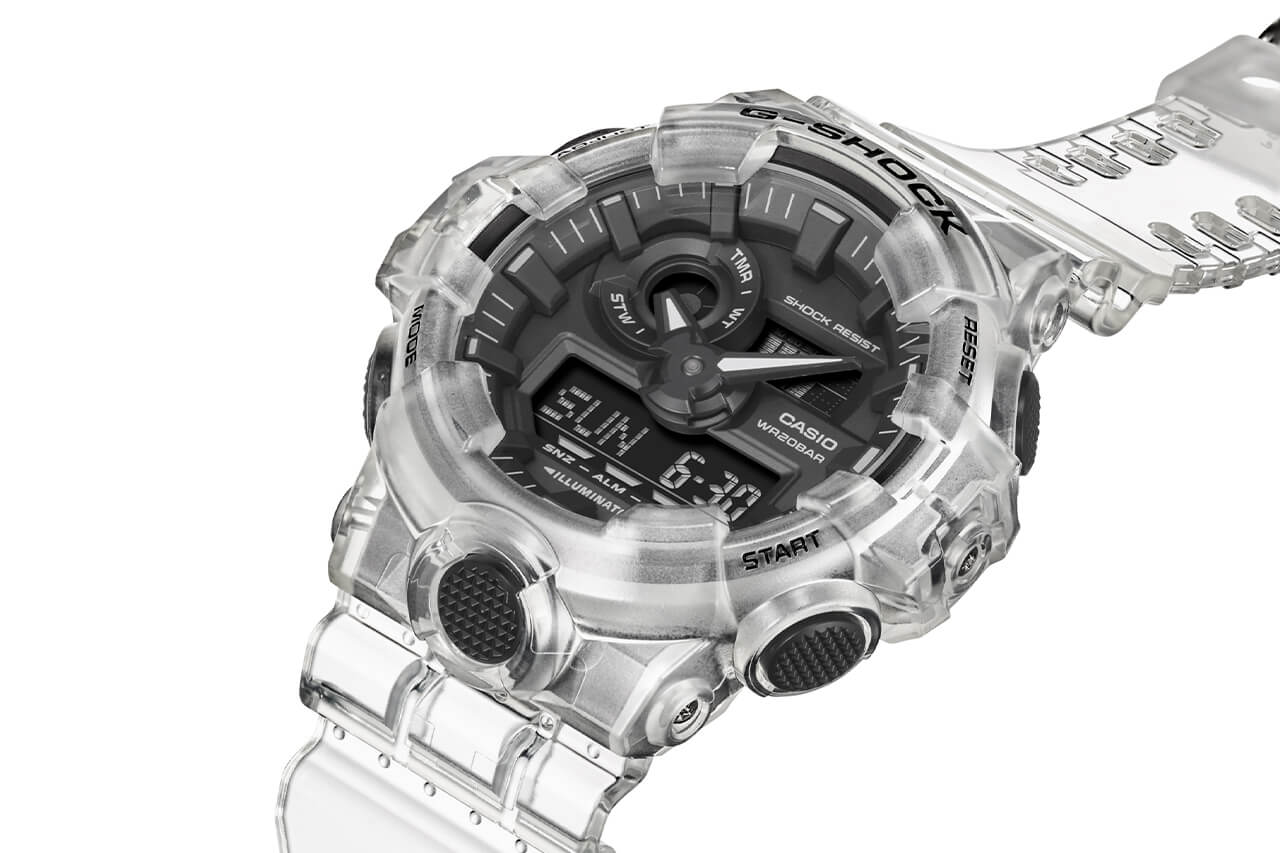 With the GA-700SKE-7AER we at last find some variety, if only because we swap from the dark grey colour back to the ghostly white translucence of the CasiOak. This also happens to be the largest piece out of the range. 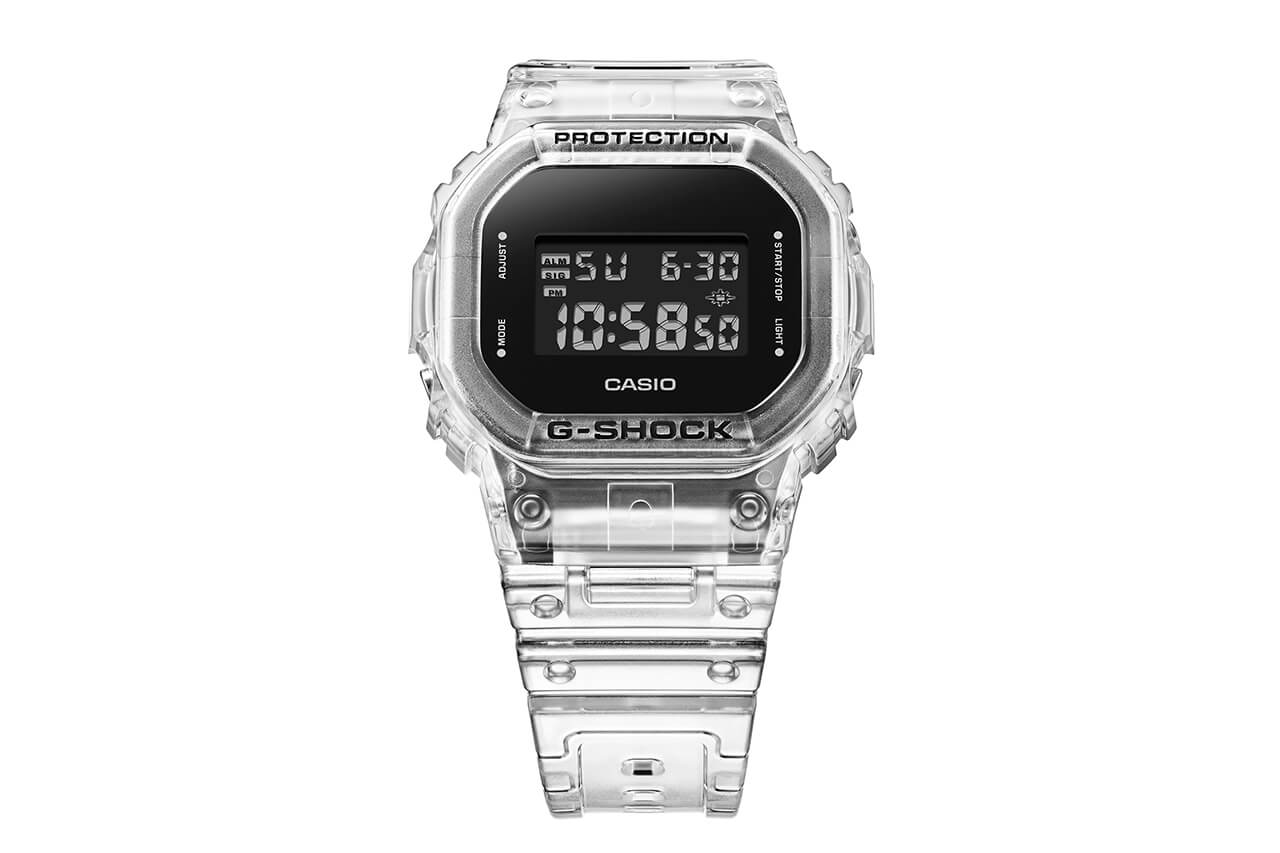 The most unique offering, which I would still include if the range were reduced to two or three pieces, is the DW-5600SKE-7AER. It’s the only fully digital variant and has that classic square dial found on most Casios. The translucent white case and strap are cool, but we’ve already seen them by this point.

The similarities between the colours and designs make it hard to pick out a favourite and I wish there were a little more diversity in the range. However, if you look at each watch in isolation, they do have a cool aesthetic and are highly functional. And, of course, they won’t break the bank unlike a certain Royal Oak, with all the pieces individually priced between £109 – £219.