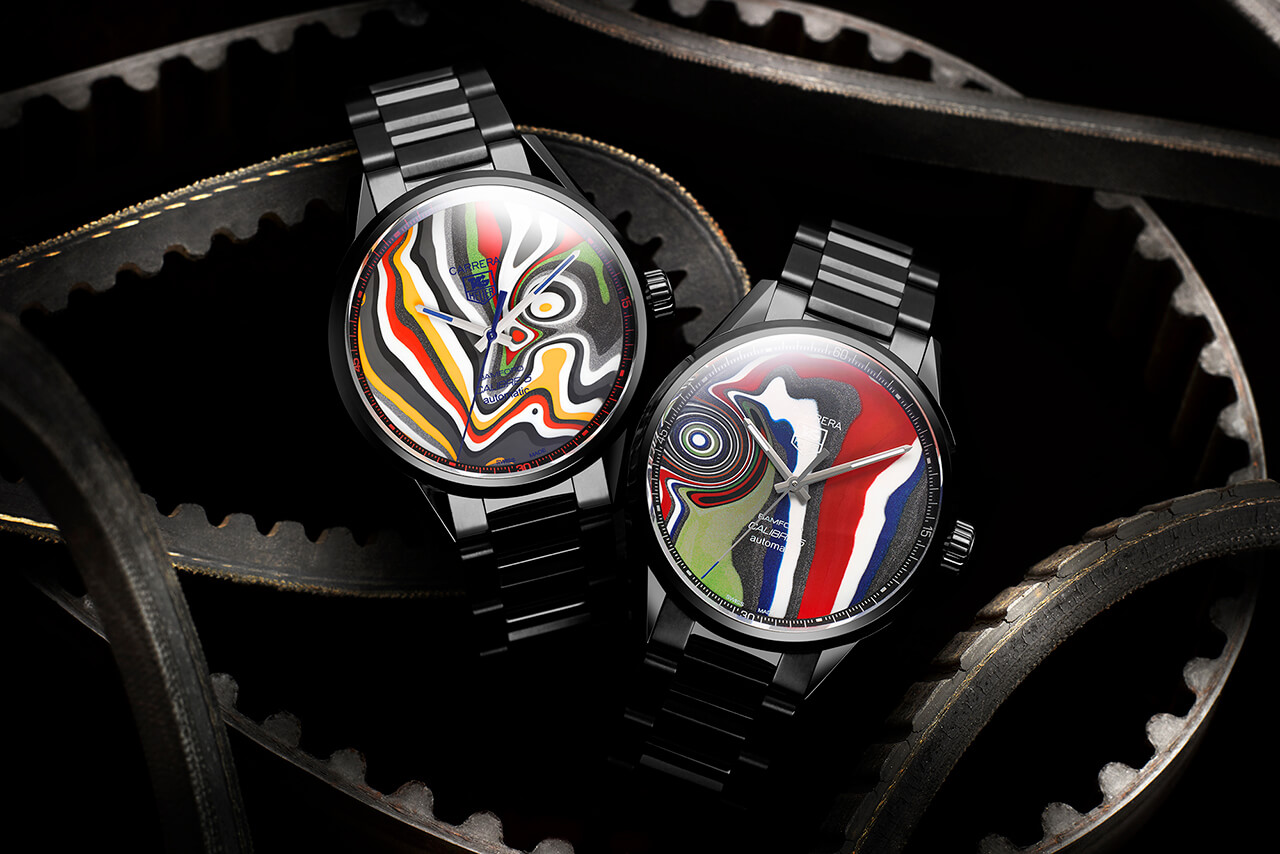 Cars need a lot of paint. In fact, they need so much that the runoff has its own name: Fordite. It’s the overspray that builds up over time in factories, layer upon layer of solid, high quality paint. Most of the time it’s just wasted and discarded. But for the latest three-way between TAG Heuer, Black Badger and Bamford Watch Department, it makes for one hell of a dial for this limited edition TAG Heuer Carrera Calibre 5.

If you know the name Black Badger, it’s likely in relation to his trademark solid blocks of lume, particularly in his collaborations with MB&F. Here however he’s opted for a different material entirely, one even more striking. Sure it doesn’t glow like nuclear fallout, but… well, just look at it. 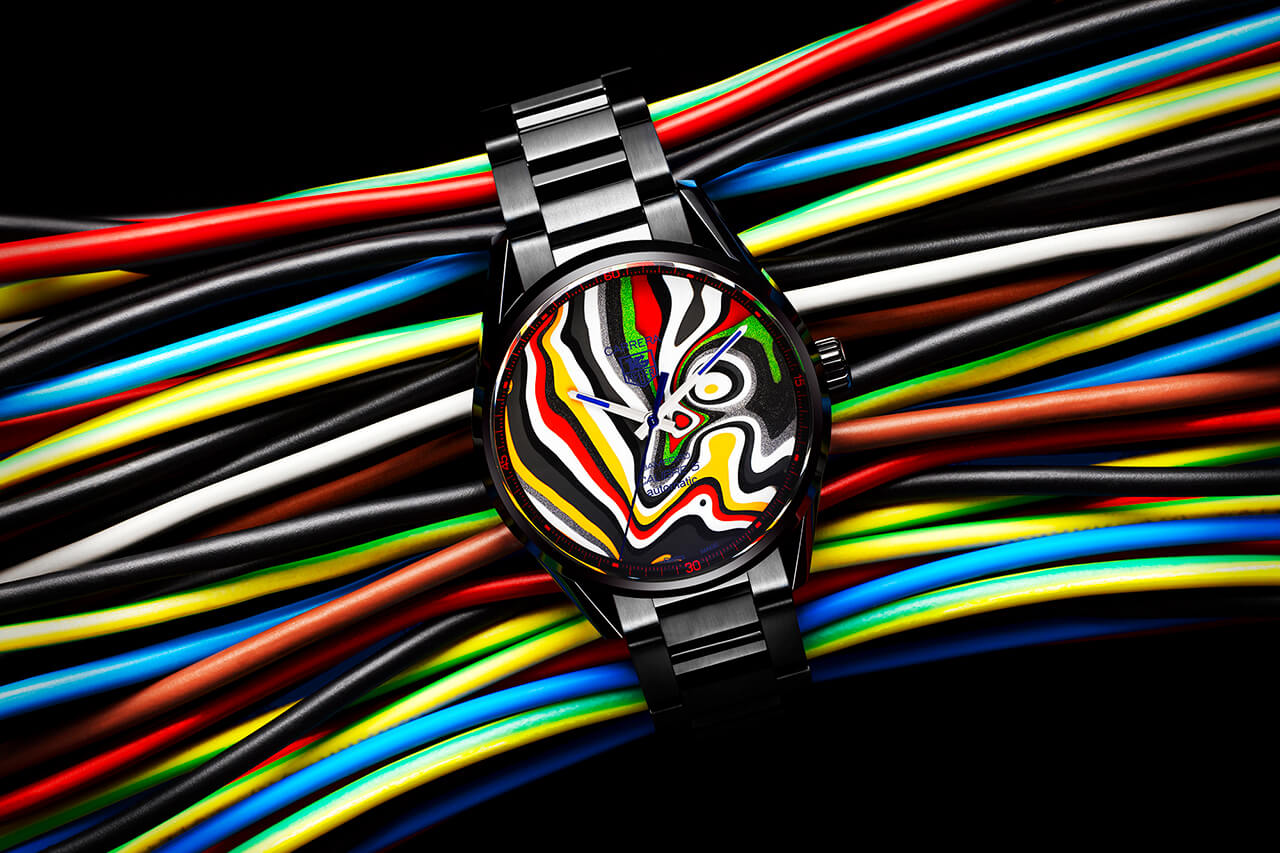 The actual Fordite in question originates at the Ford factories in Michigan, sometime between the 1970s and 1990s. It represents the build-up of innumerable layers of paint that are then machined to reveal the coloured grains in each one.

Given the racing links to TAG Heuer’s Carrera, it makes the perfect canvas for a material so inseparable from the automotive world – the 5 specifically as I can’t imagine reading chronograph subdials on that paint. 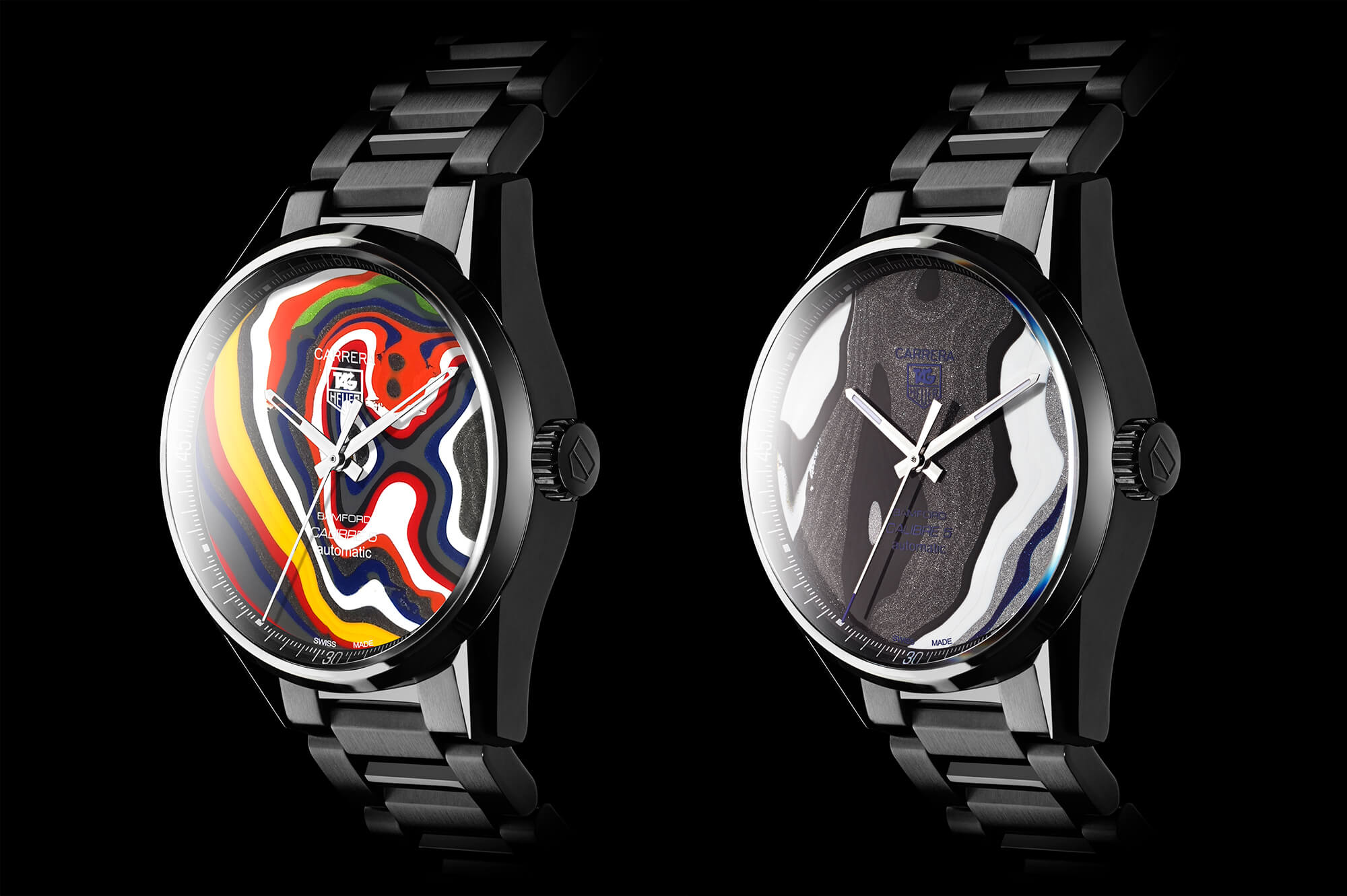 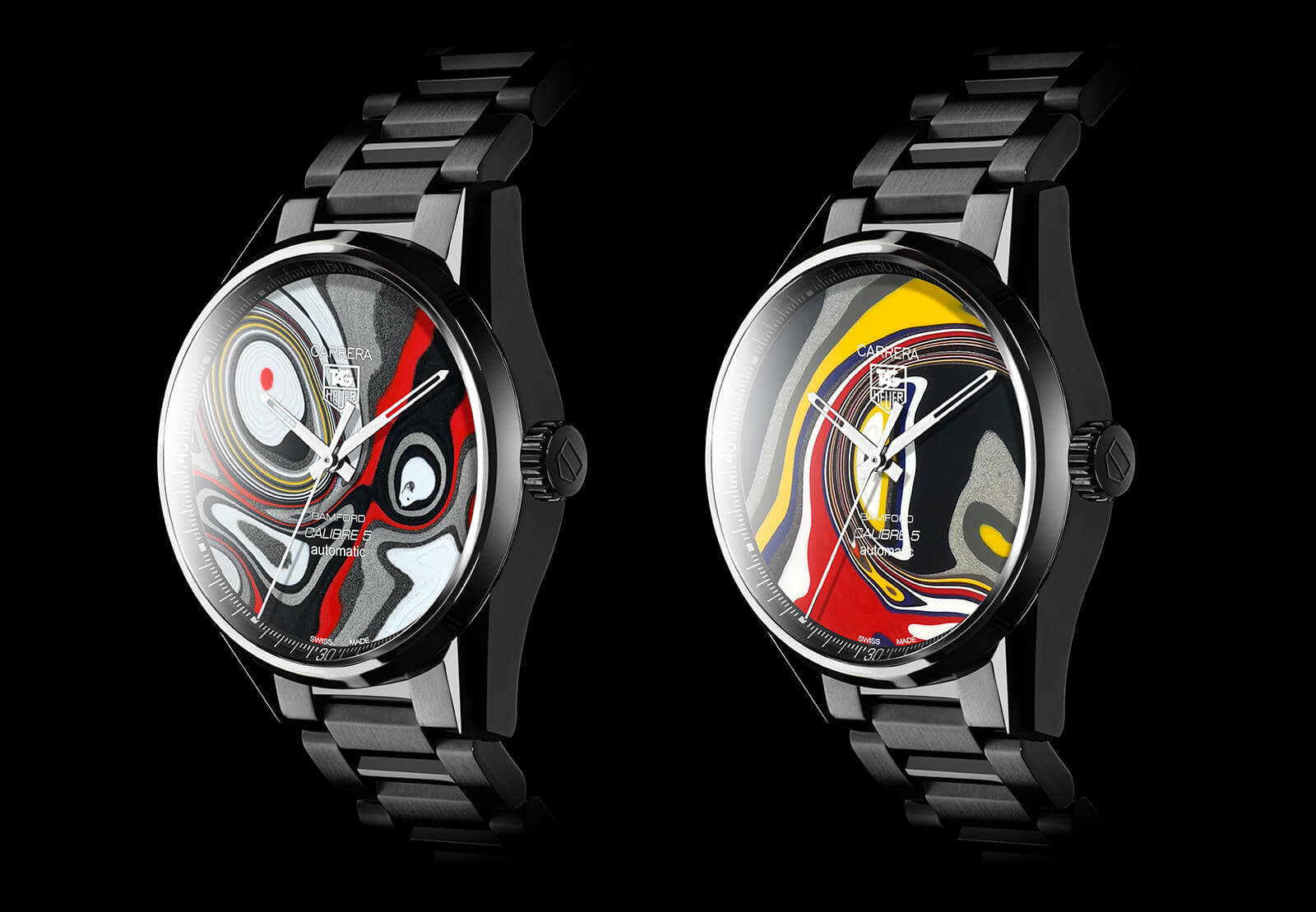 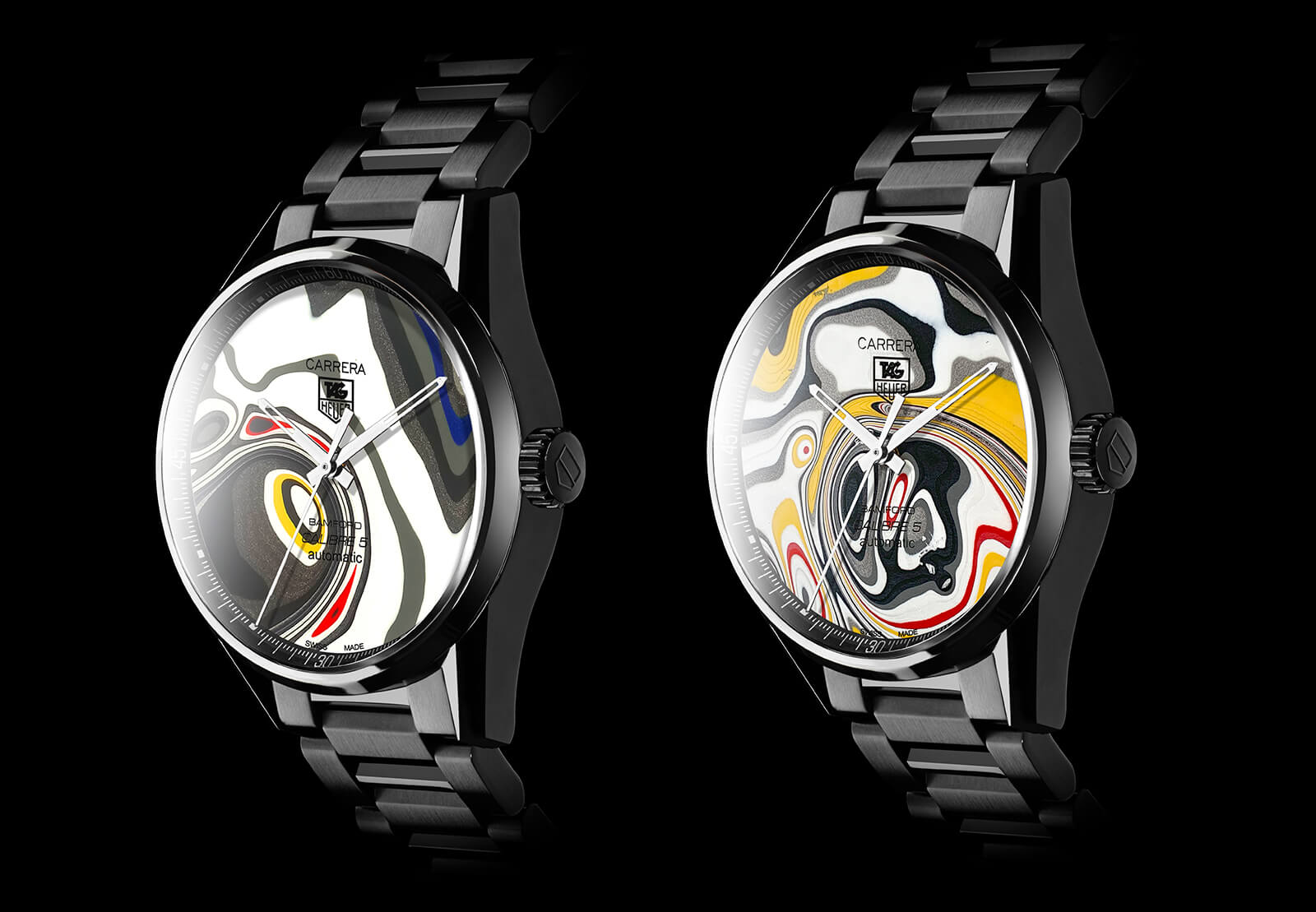 The cool all-black look – a Bamford Watch Department staple – stands in stark contrast to the 10 differently coloured dials. The strangely organic patterns and waves of paint make for the kind of statement pieces that it’s impossible to take your eyes off. 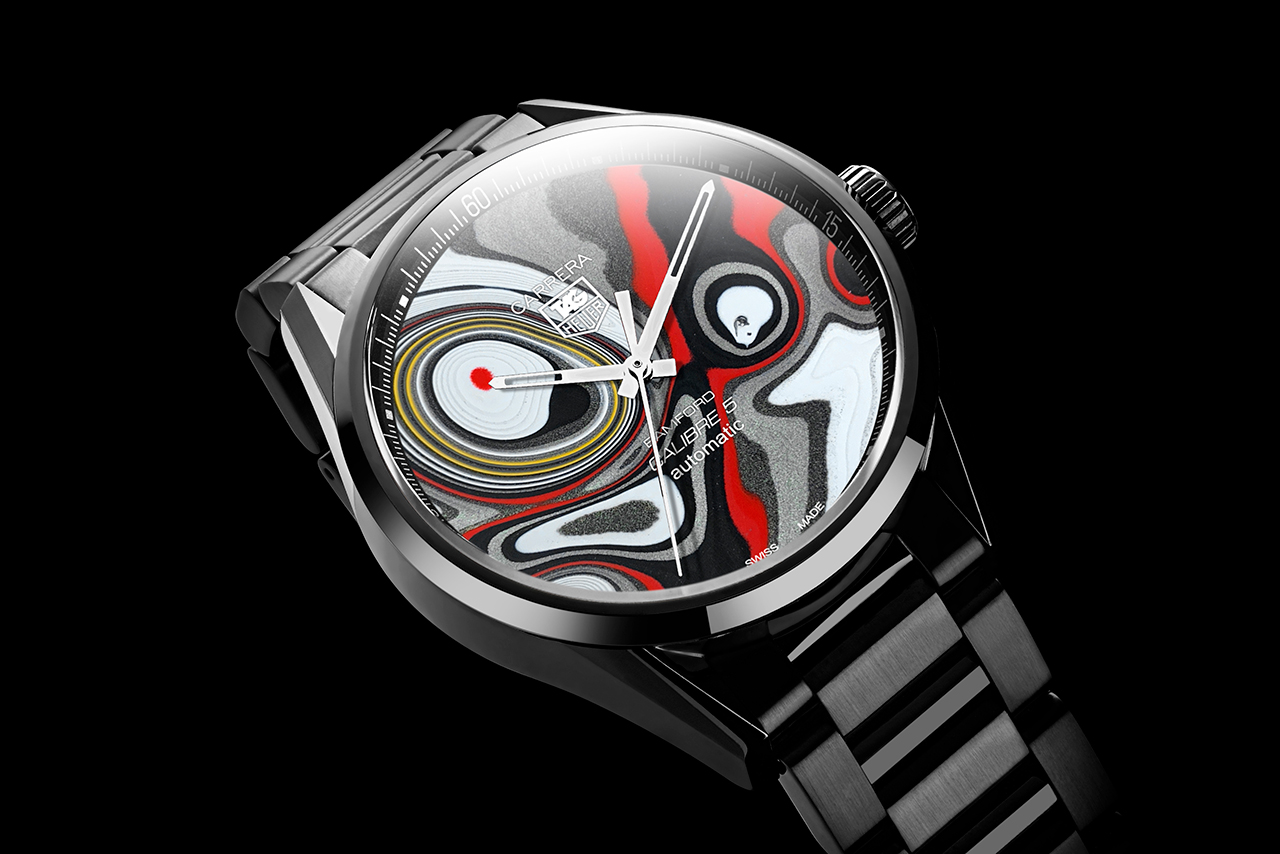 Other than the dials and new darker paint job, these pieces are exactly the same as the usual 39mm steel model readily available, making for a solid, reliable timepiece. Well, you wouldn’t want to go too crazy, would you? 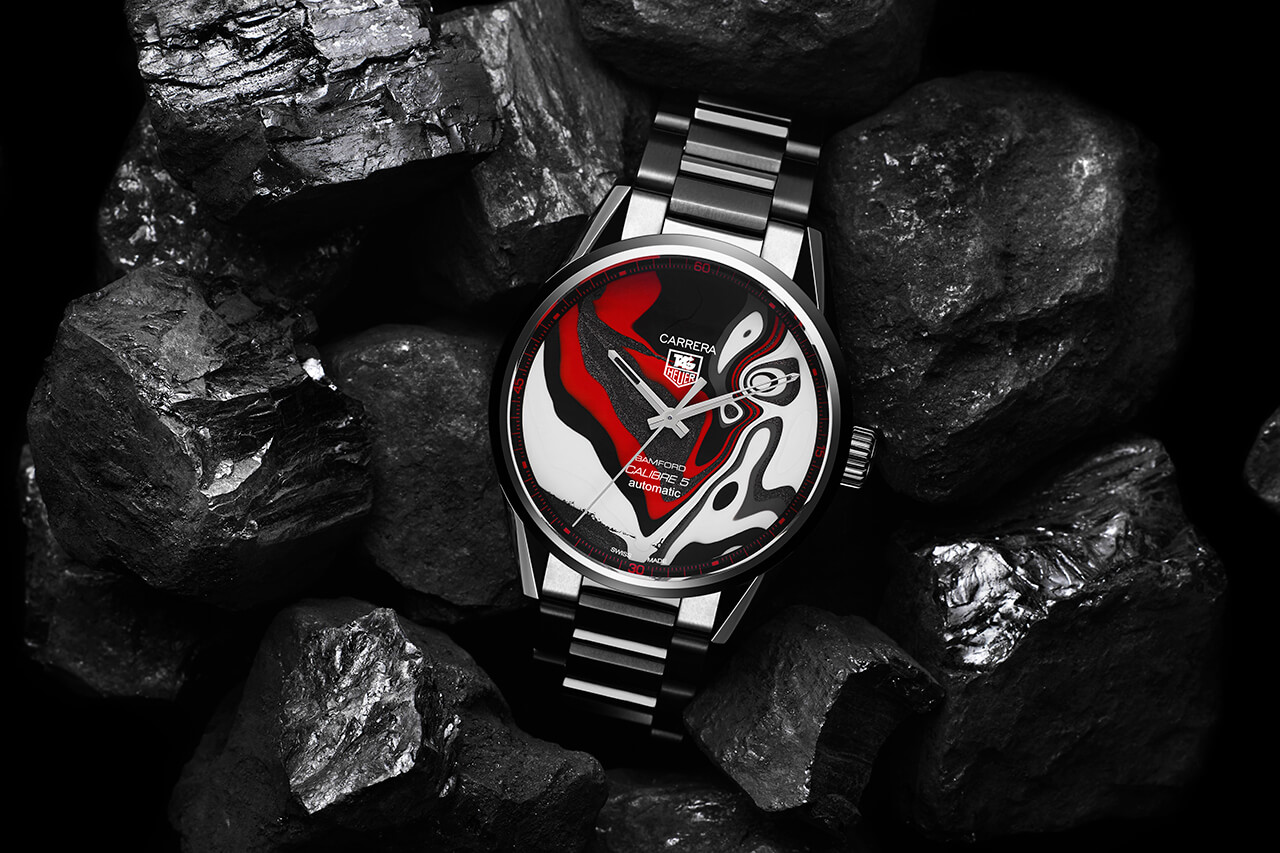 Sure, these watches aren’t for everyone. If a classic Vacheron is your perfect idea of a watch you’ll likely want to put some distance between yourself and these particular editions of the Carrera Calibre 5. If what you’re after on the other hand is something utterly unique and even more ingrained into the car world than the original racing watch, this might well be your dream timepiece.

So, next time you get your McLaren resprayed, see if they’ll let you chip away at some of the runoff. It could make for one hell of a dial. Available now, you can purchase a one of a kind Fordite TAG Heuer Carrera for £5,500 from Bamford Watch Department’s website.