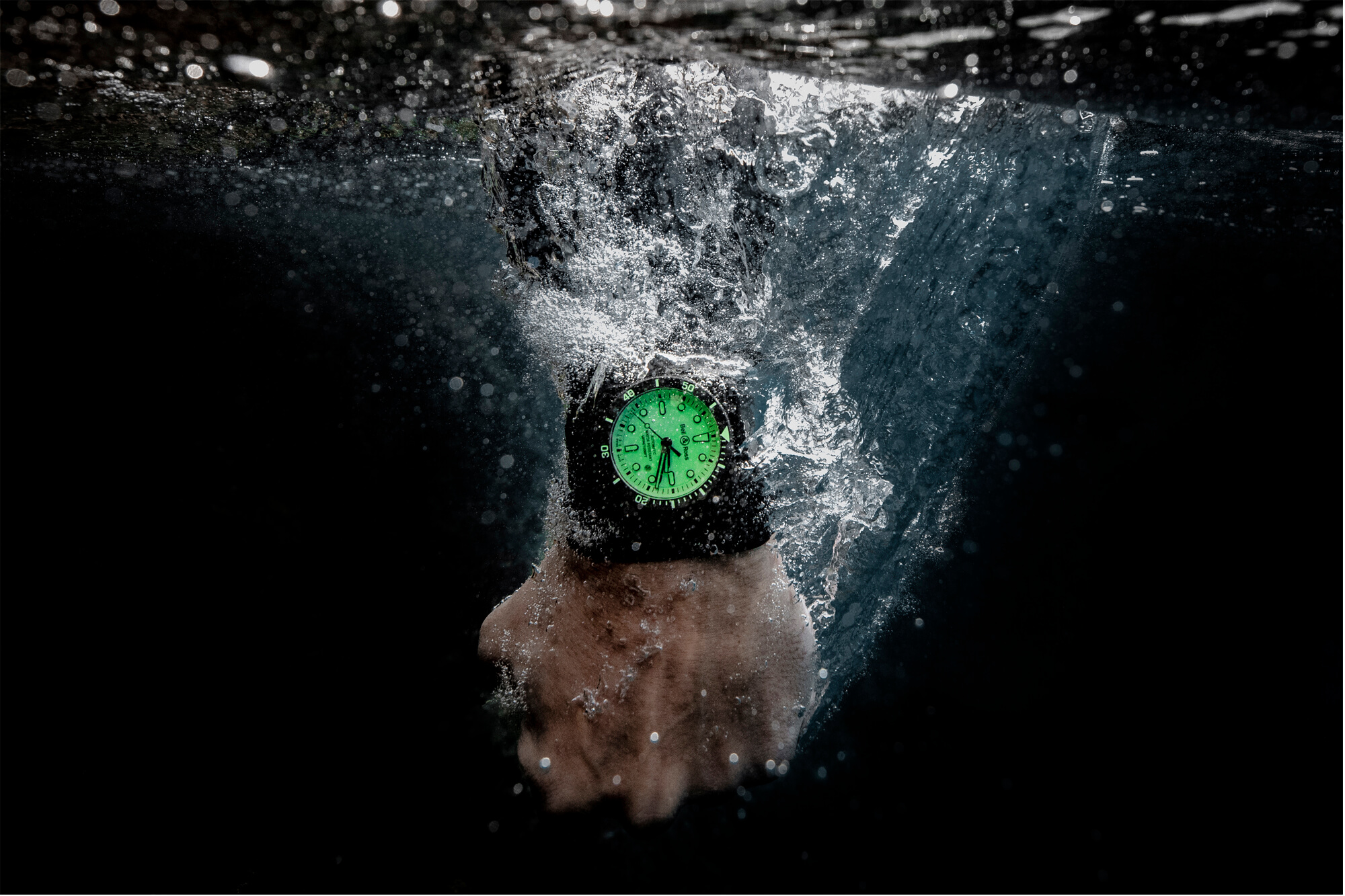 Not that long ago luminous material was reserved for hands and numerals and applied in such sparing amounts you might think it was in short supply even though (in the days of watches actually being used as tools whilst under water or in the air) it could potentially save your life.

But now that mechanical watches are appreciated for altogether different reasons, including style, makers have learnt to have fun with lume, releasing the entire watch as a potential canvas.

Bell & Ross has certainly been active in this relatively new frontier in watchmaking coating dials and even skulls in luminous paint. But last year the French brand took things up a notch with its BR 03-92 Full Lum, a playful watch that turned the notion of lume in watches on its head, instead of markers being picked out in lume, everything except the markers was, with the entire dial and even the watch’s rubber strap glowing in the dark. 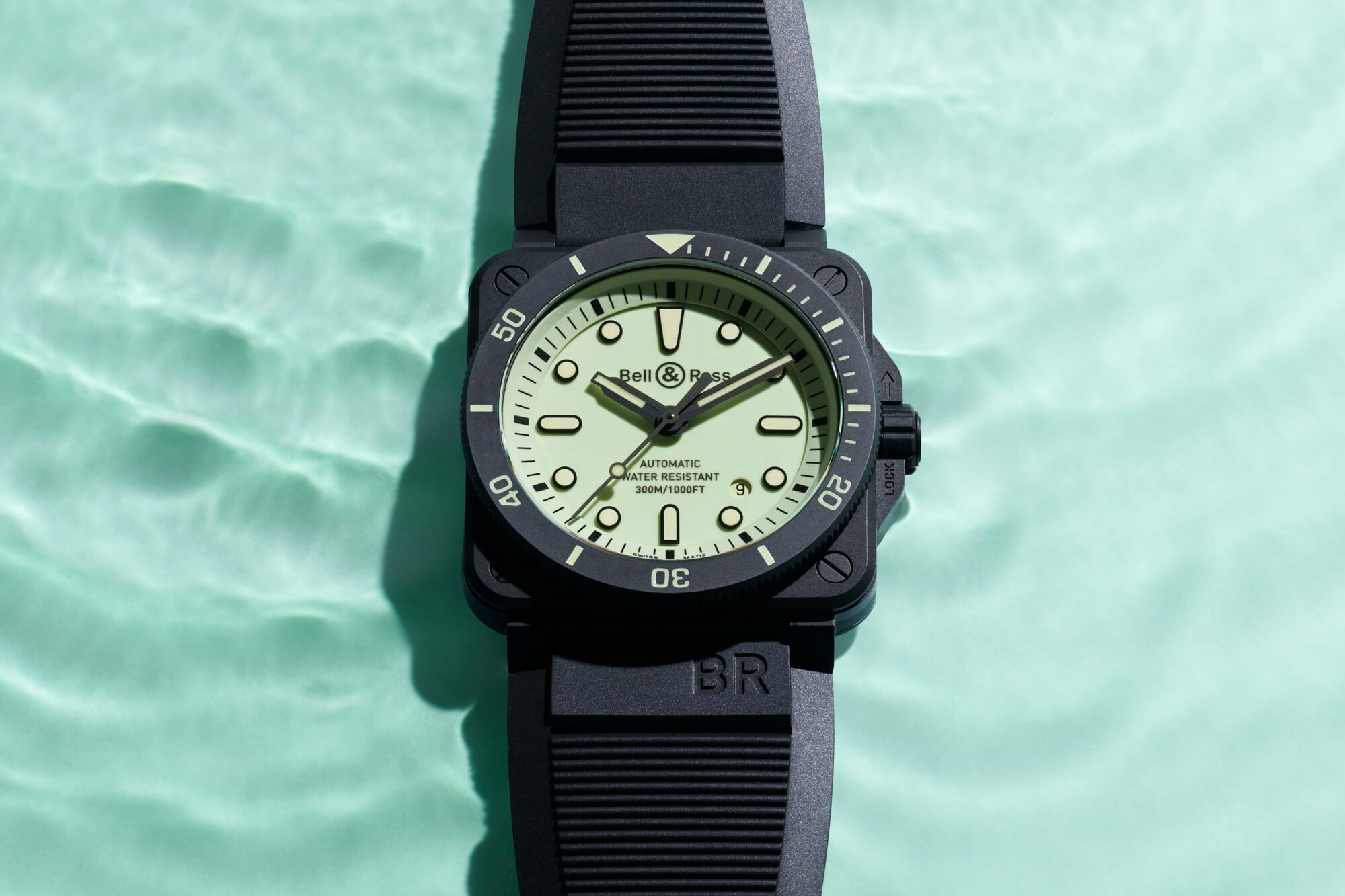 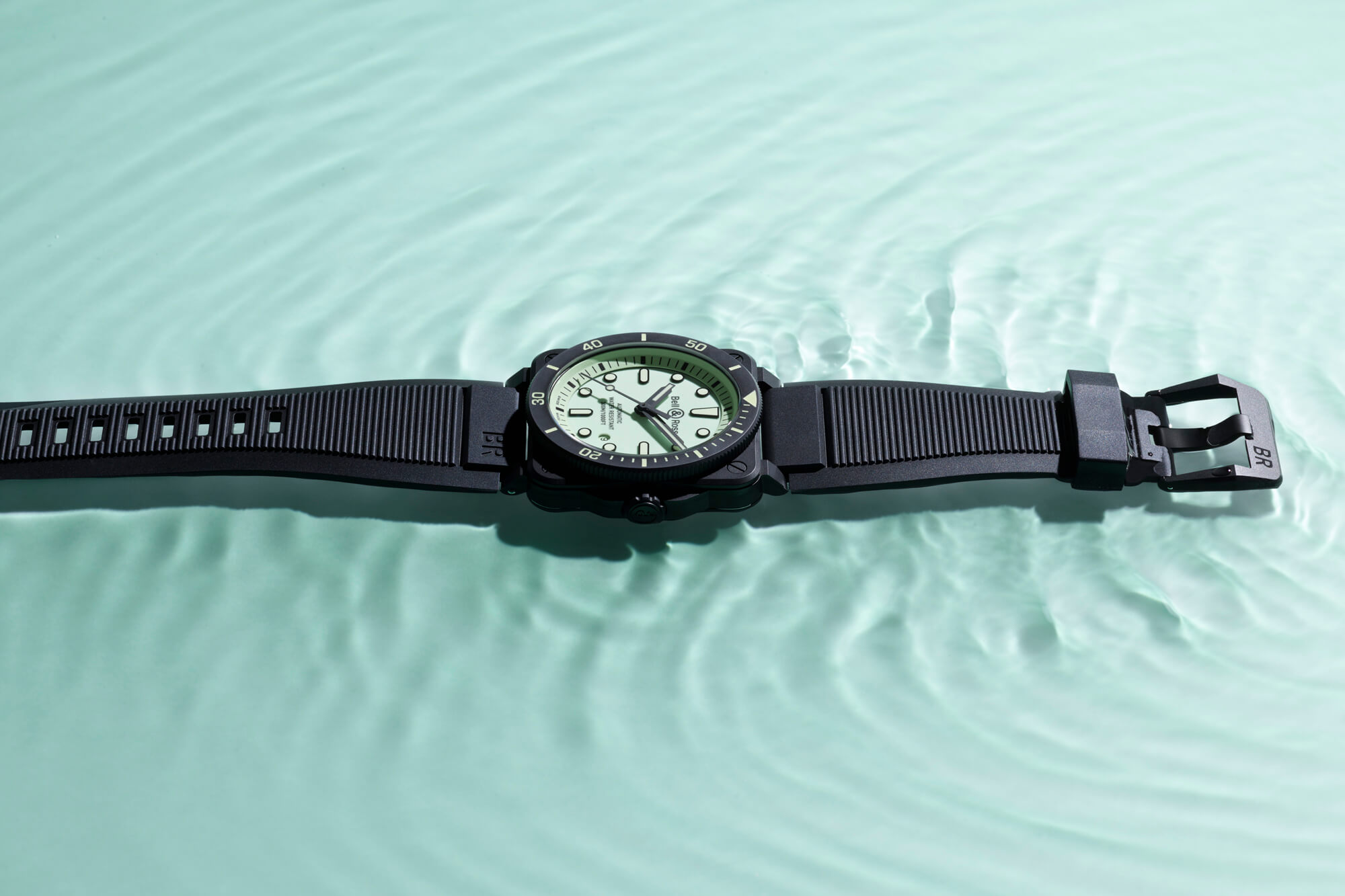 I tend to prefer the look of the BR 03-92 Diver watches to the simpler, cockpit-inspired BR 03-92, you get the unidirectional rotating bezel, crown guards and lume pot hour markers added. It’s the kind of hybrid that perhaps shouldn’t work, but as far as I’m concerned really does, maybe I just prefer the trappings of diver watches. 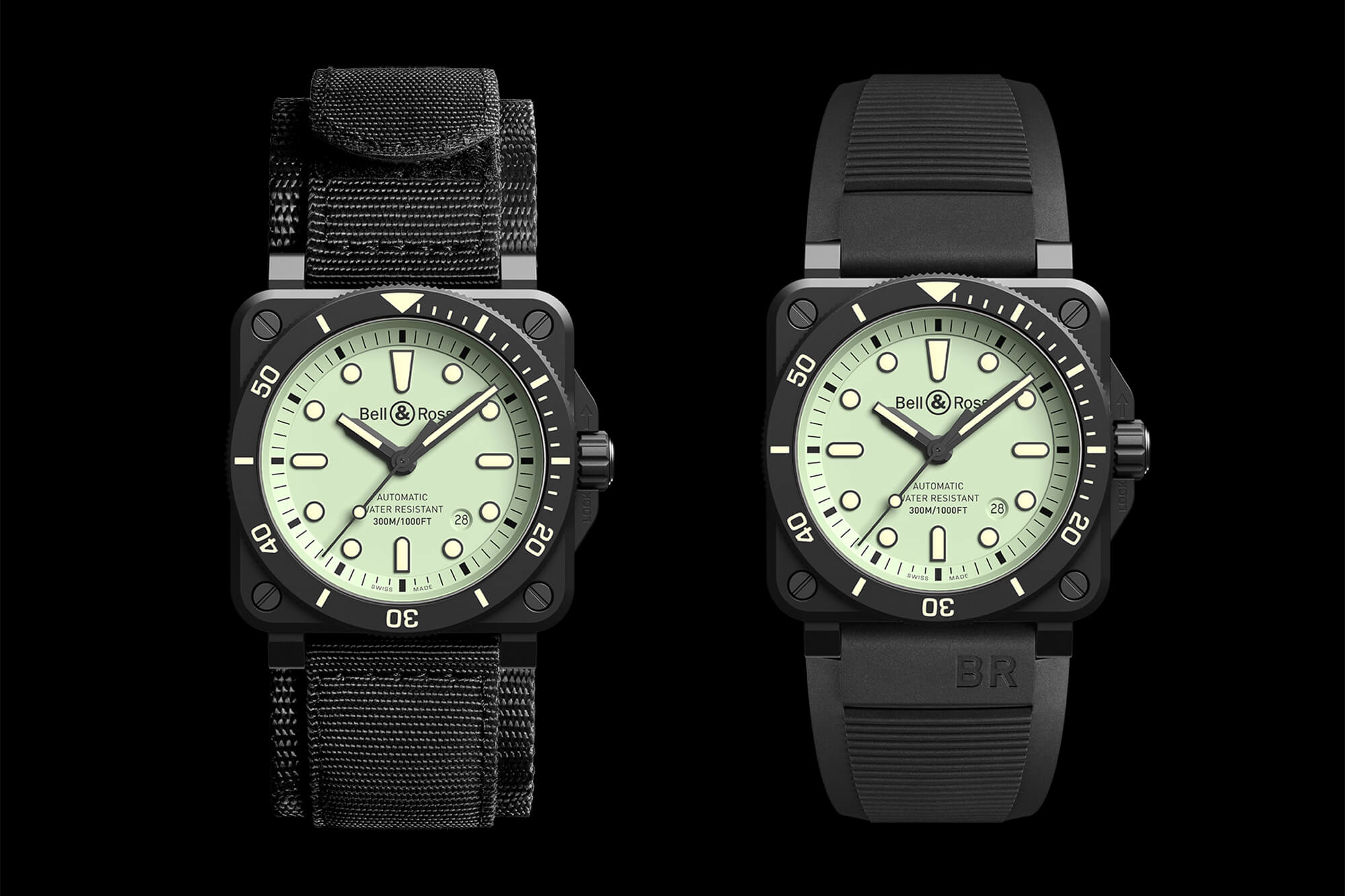 Here we have the same 42mm square matt black ceramic case used for the BR 03-92 Diver Matt Black and the same BR-CAL.302 automatic movement, but that’s where the similarities end.

The dial is taken from the Diver line and given the Full Lume treatment, being entirely coated in Super-LumiNova’s C5 while the lume pot hour markers are filled with C3, which not only adds contrast but much-needed depth. 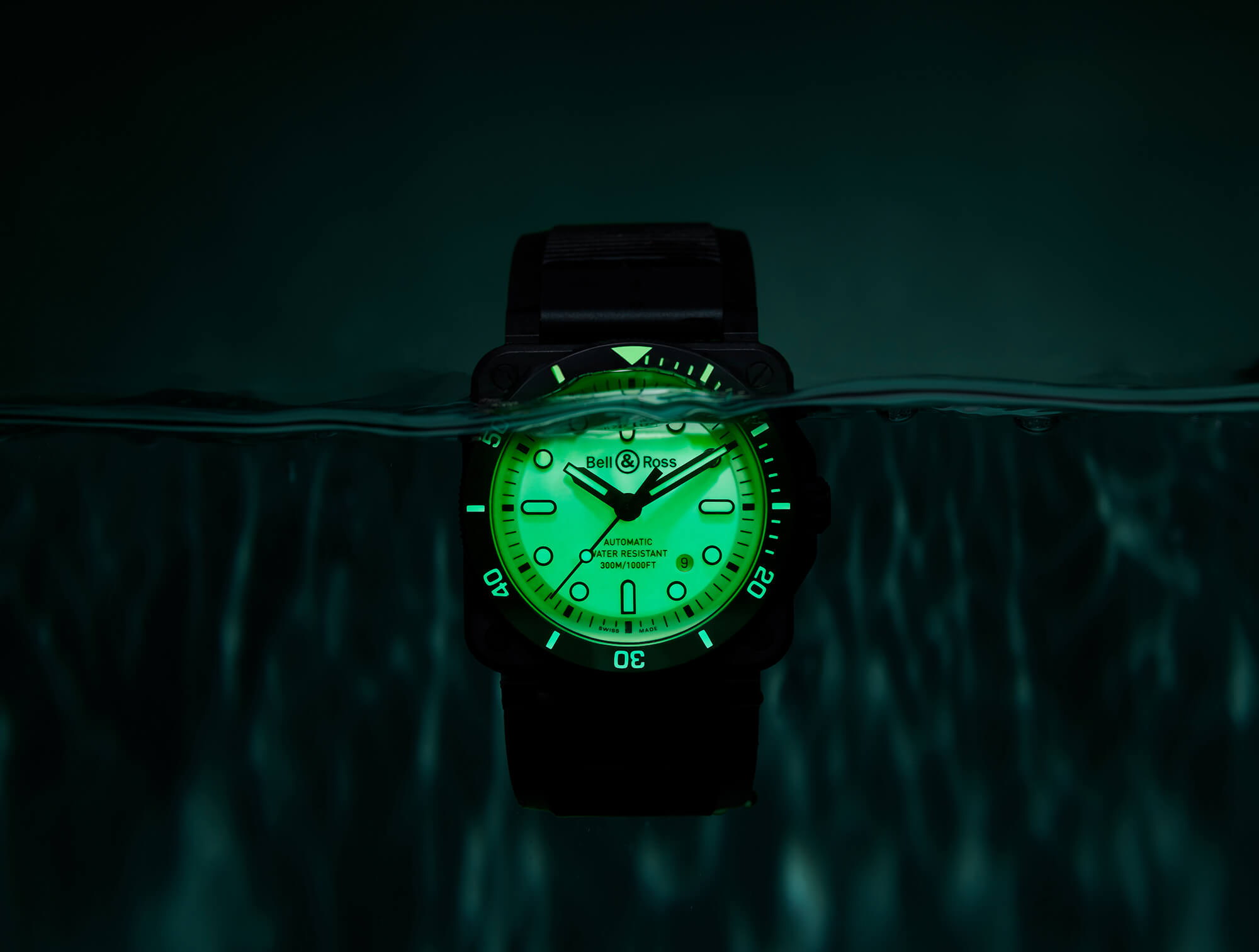 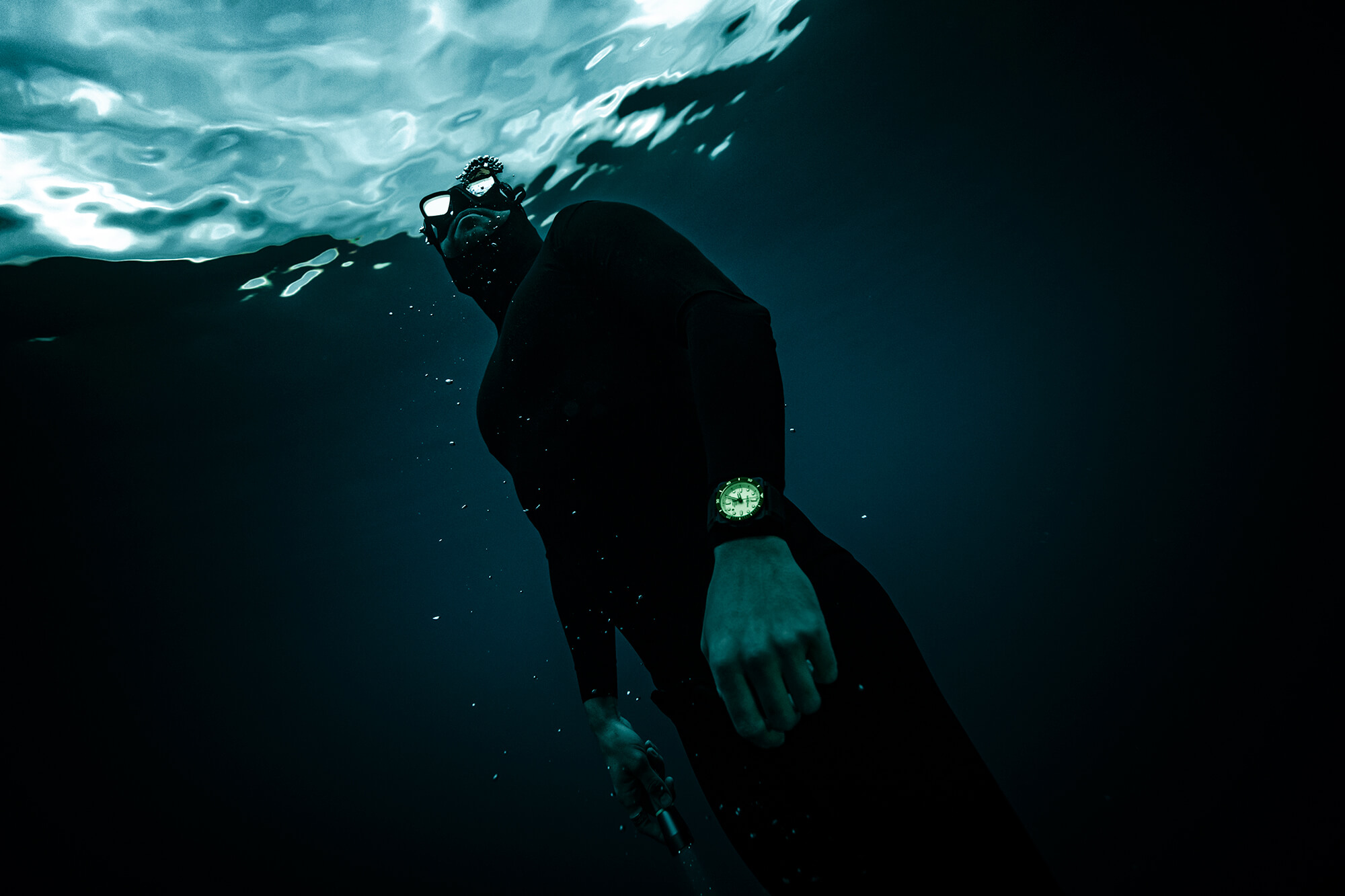 More than its predecessor, the BR 03-92 is concerned with legibility and to that end the BR 03-92 comes with both black rubber and a black fabric and Velcro straps, neither of which glow and instead bring sole focus onto the dial.

Before watch cases were milled to the within the micron by computer-controlled CNC machines square watch cases were more difficult to design and make water tight which means even decades later a square dive watch is still a rare sight. Bell & Ross don’t seem to have had any trouble in that regard though, the BR 03-92 is water resistant to 300m. 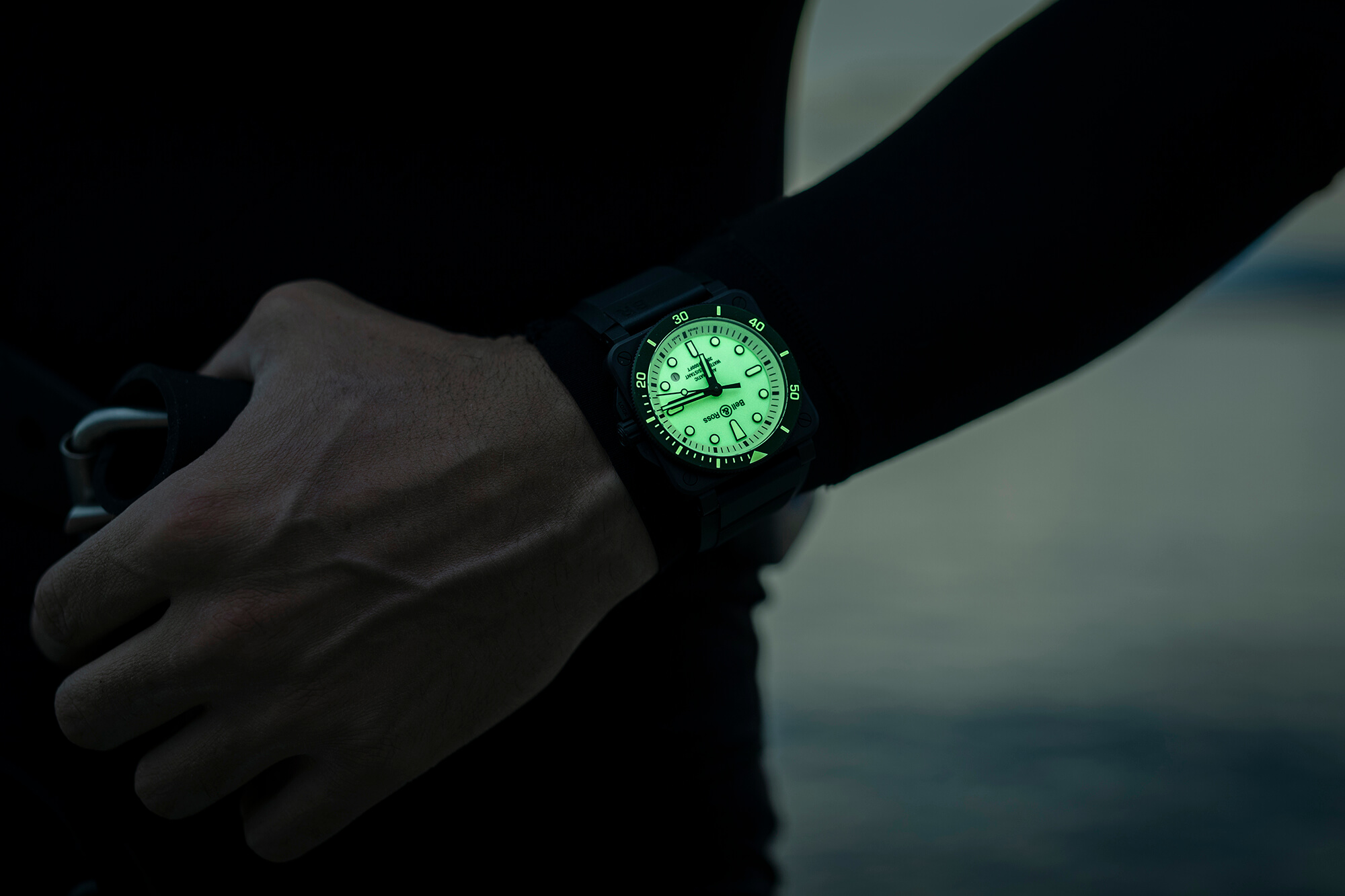 Full credit to Bell & Ross though, the French brand began life with its head in the clouds but, as it has matured and sought to expand its collection beyond aviation-themed pieces, co-founder and designer Bruno Belamich has hit a rich vein of form releasing one satisfying watch after another and proving the original template to be far more versatile than I would have thought possible.