In Focus: Skeleton Concept, Bespoke Timepieces That Live Up To Their Name - Oracle Time 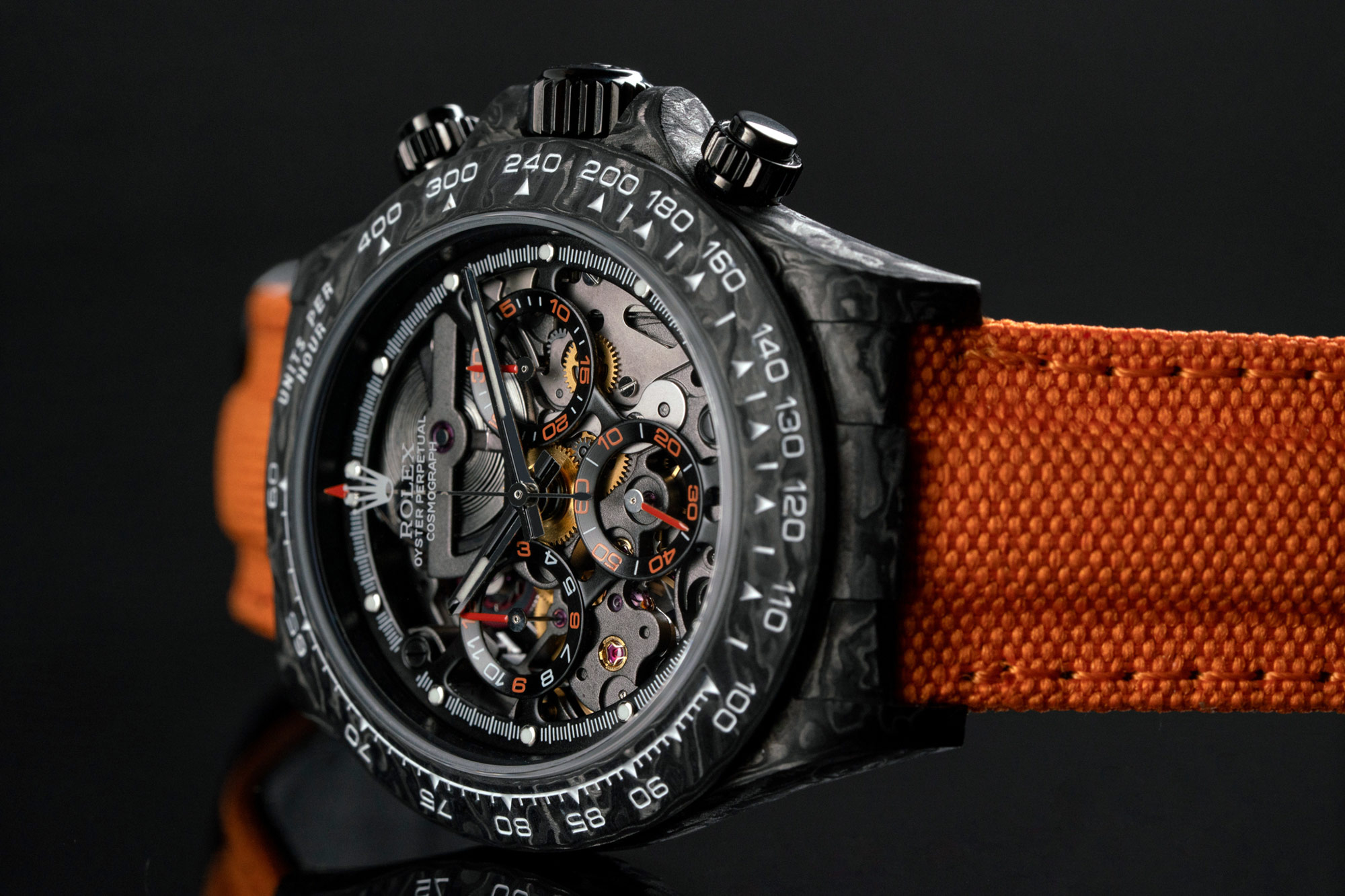 Skeleton watches are cool. Sure, they’re over the top and they can impact the readability of the display, but if you were ever to put a poster of a watch on your bedroom wall instead of a Ferrari then it would probably be a skeleton. And it might well be one of the hand-crafted custom watches from Skeleton Concept.

Skeleton Concept are a French atelier which specialise in customising and skeletonising highend luxury watches for individual clients, which are then released as a limited edition. Their list of clients is pretty insane: legendary tennis player Mansour Bahrami, world champion footballer Presnel Kimpembe and the first Venezuelan driver to win an F1 grand prix Pastor Maldonado. 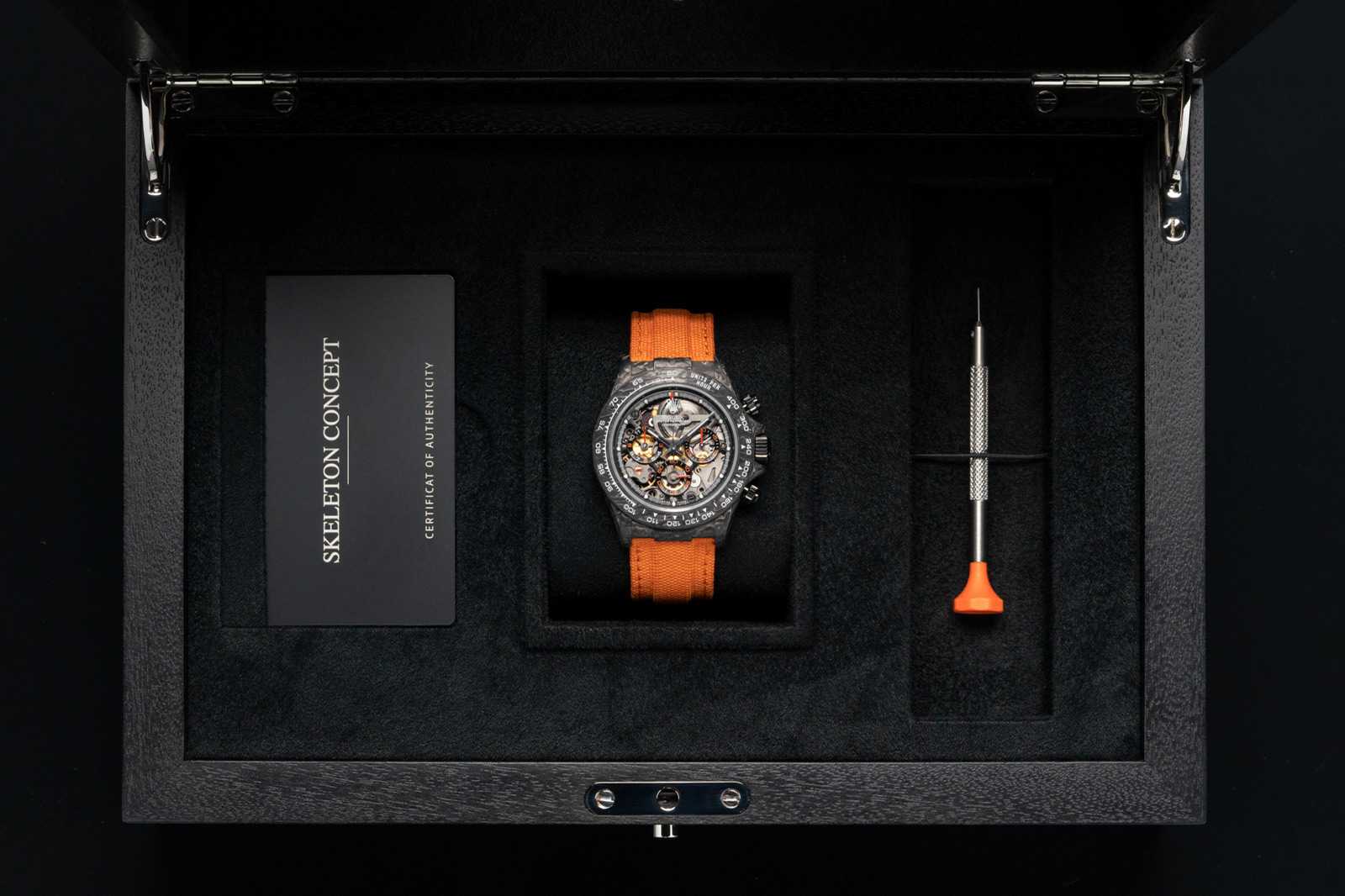 Each watch they produce is created with close collaboration from the client, making it the ultimate bespoke and personal timepiece. Their specialty is in skeletonising Rolex Cosmograph Daytonas, which makes sense because it is one of the most popular watches of all time and many people want to give it some individual flair.

Regardless of the watch, the process is the same, right up to their most successful piece to date, the Samuel Eto’o Concept. The first step is to establish what legacy or story the watch needs to represent. For Eto’o that’s easy: he’s the greatest footballer Cameroon has ever produced, finding success at national and international level with the biggest teams. So, the watch needed to pay homage to the country of his birth. 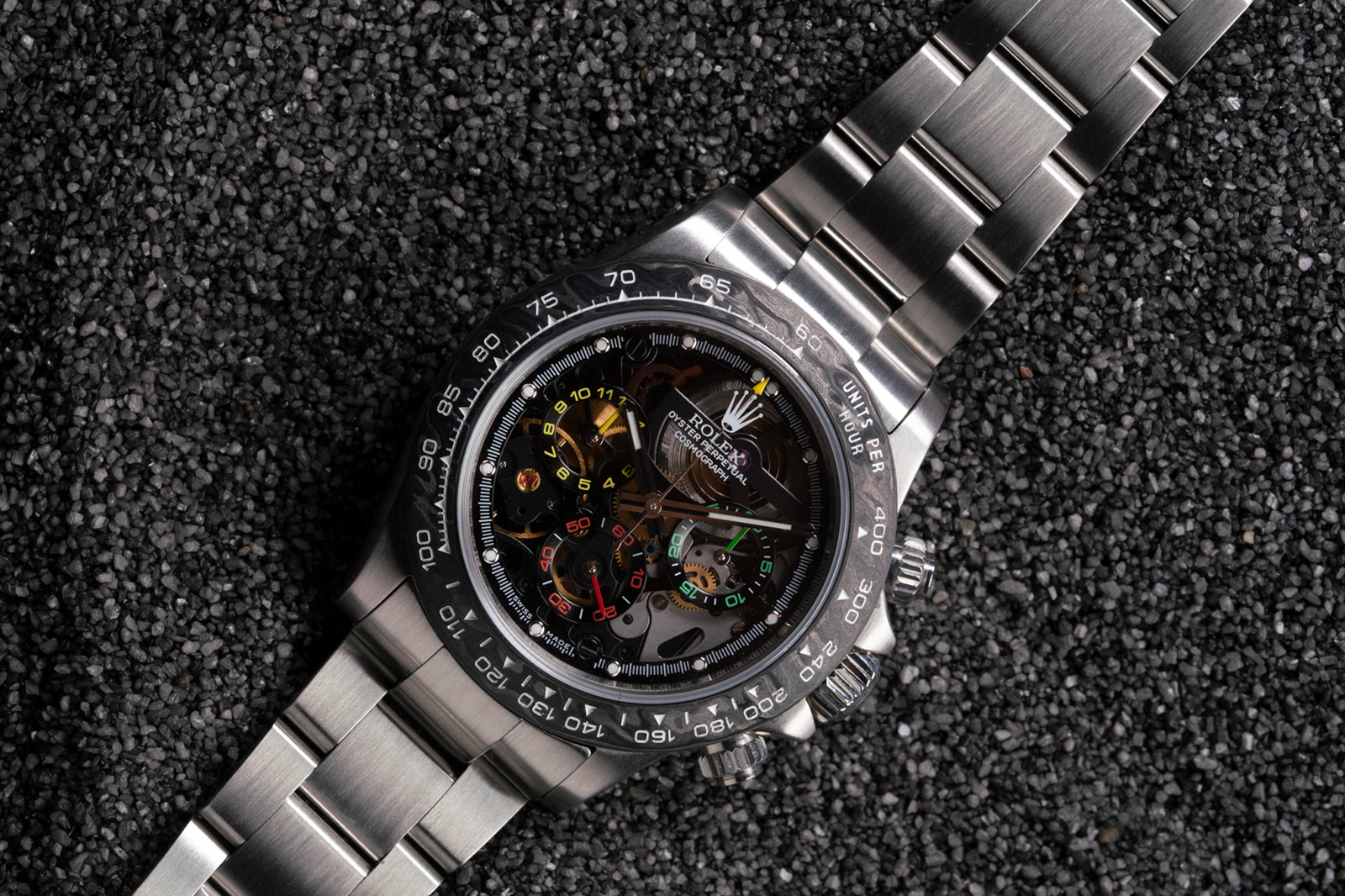 From there, it’s a case of designing the watch on paper, getting the outline right before discussing the finer details. Then, to give you a feel for what’s coming, there’s the prototype, which will show you every inch of the piece for a final check. Finally, there’s the actualisation, the making of the watch. 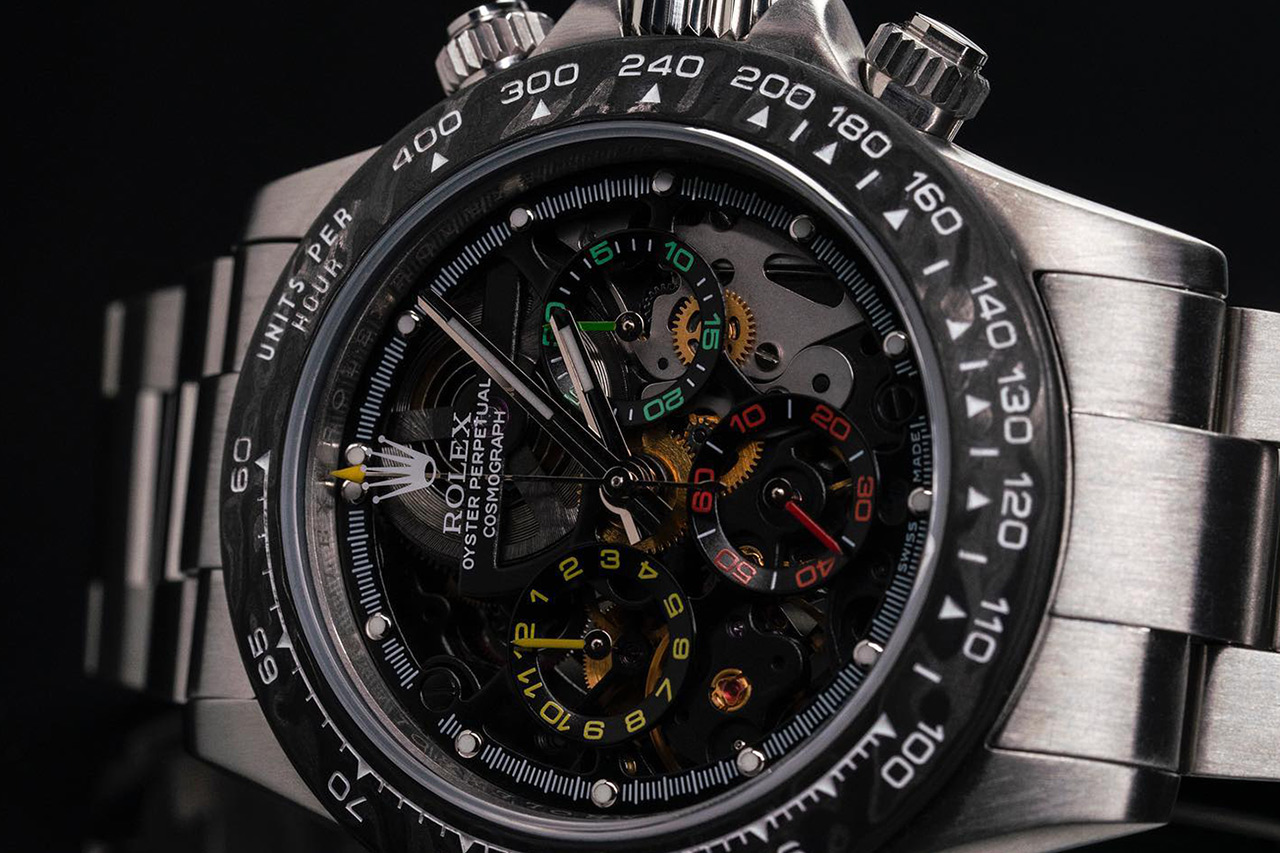 In the case of the Samuel Eto’o concept, it was decided to opt for a matte black skeleton movement with a yellow 12-hour scale, red small seconds and green 30-minute timer – the three colours of the Cameroonian flag. The movement, based on the 4130 from Rolex, then took two years to research and refine until the artisans were happy with it. Despite having 65% less material than the original, it maintains its 72-hour power reserve and all the same standards of accuracy and precision. 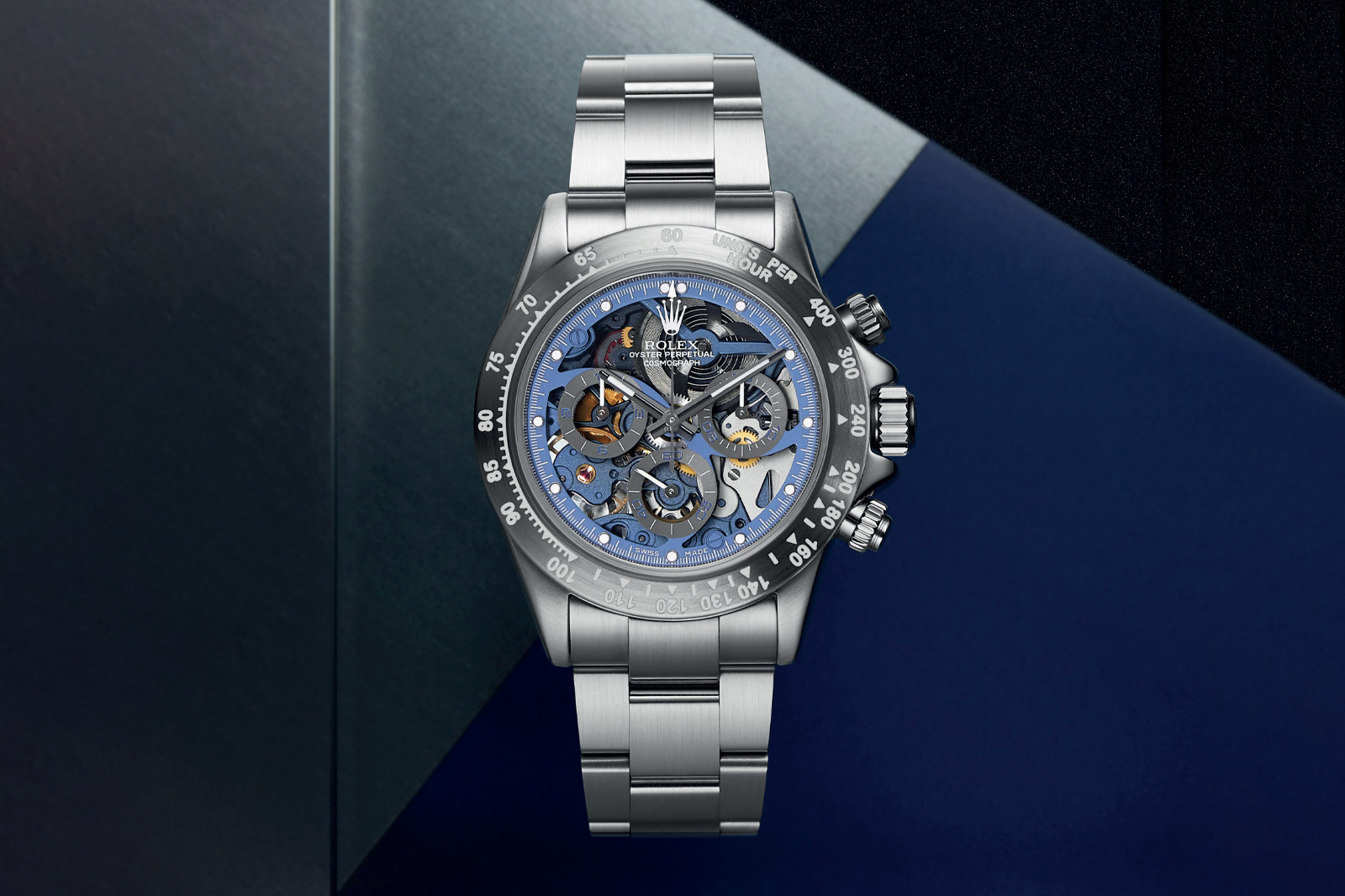 For some custom watchmakers, the original Daytona might have been lost in all that finishing. Not so here. The Samuel Eto’o Concept – and indeed Skeleton Concept’s work in general – still retains the DNA of the starting watch. Think of it like a custom performance kit for a McLaren; the elements that made the car the cutting-edge icon it is are still there, just with a new twist and a few mph added to the speedometer. 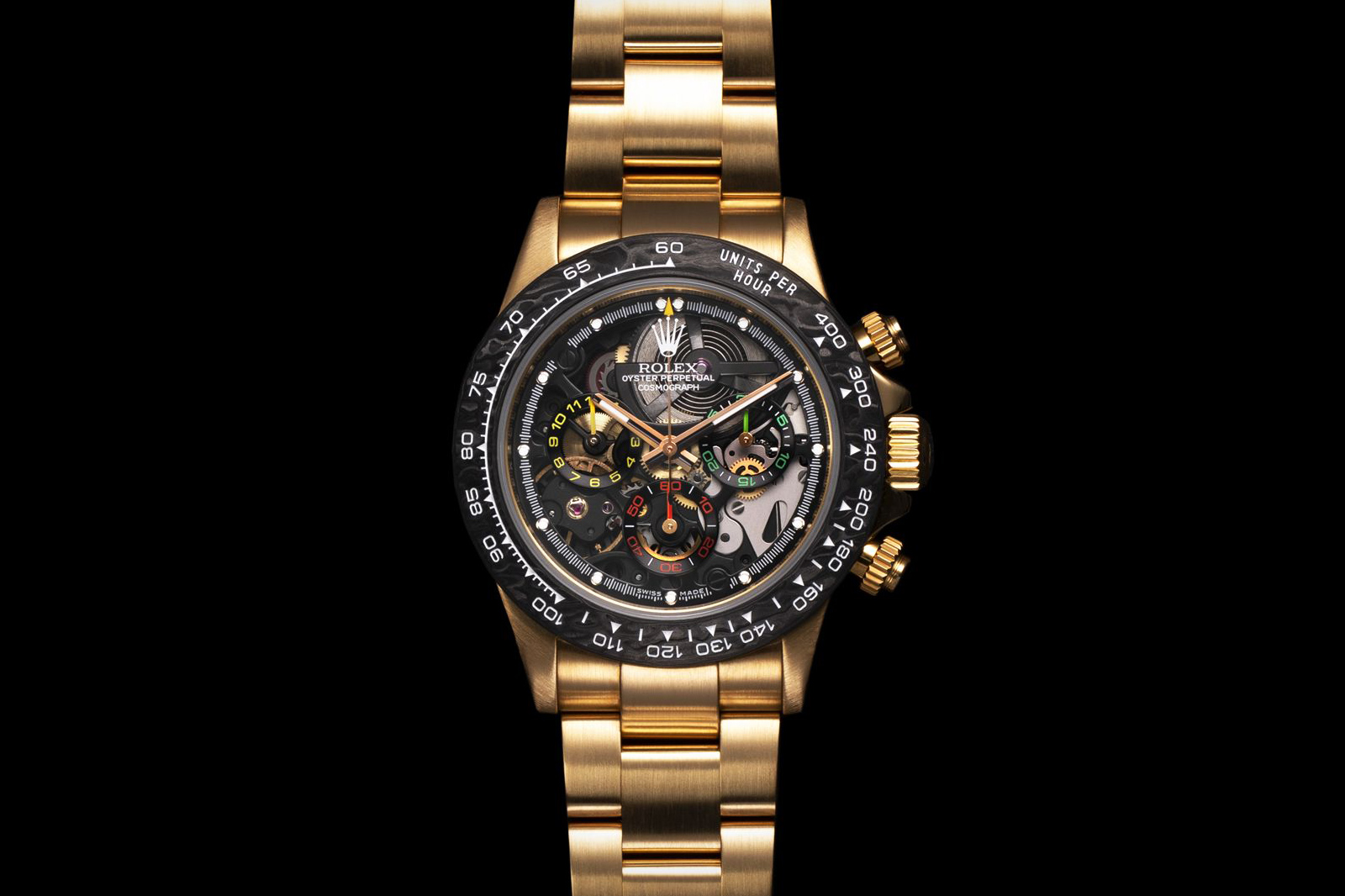 The original Samuel Eto’o Concept was so successful that Skeleton Concept have brought it back due to popular demand – in gold, this time. Despite the precious makeover – or perhaps because of it – it’s as cutting-edge as ever, offering a timepiece that Rolex would never produce in a way to get collectors’ heartbeats racing. At least those of them that prefer to take their racing watches off the beaten track.