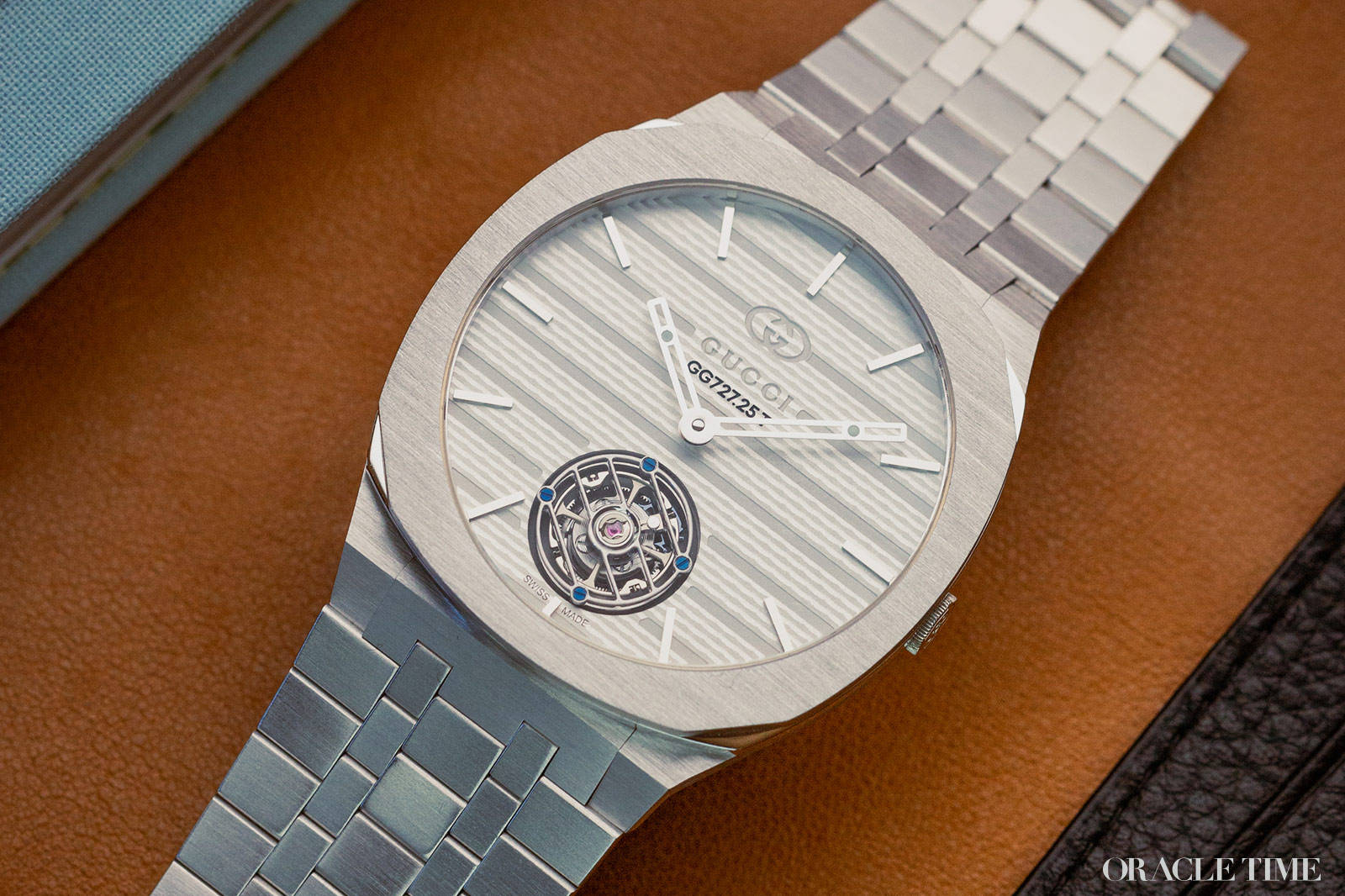 It might surprise those of us not into chic Italian fashion that the legendary Gucci has been dabbling in the watch world for longer than you might expect, with a horological heritage dating back to the 70s. Now, the label is making a play for the upper echelons of fine timepieces with their new high watchmaking collection, the highest of which is the 25H tourbillon.

First, a bit about the collection in general. The name isn’t just recognition that there aren’t currently enough hours in the day. Gucci creative director Alessandro Michele has an affinity for a very specific trio of numbers. According to the Italian designer, 2 represents balance and cooperation while 5 represents curiosity and freedom. 7 on the other hand is all about completeness. Well, the 2 and 5 are right there in the name, but if you were wondering where the 7 was, you’ll need to look a little deeper. Right below the dial, in fact. 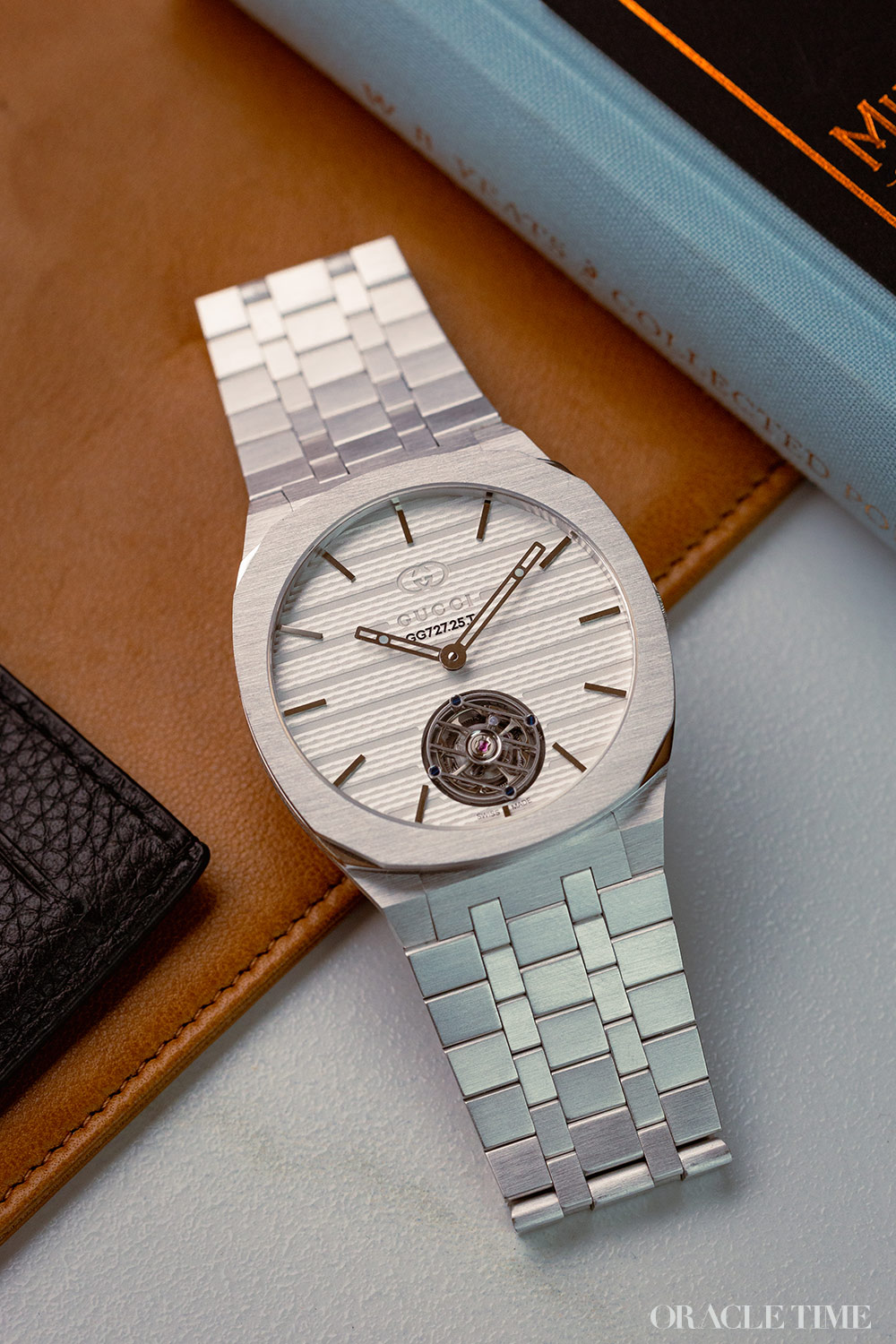 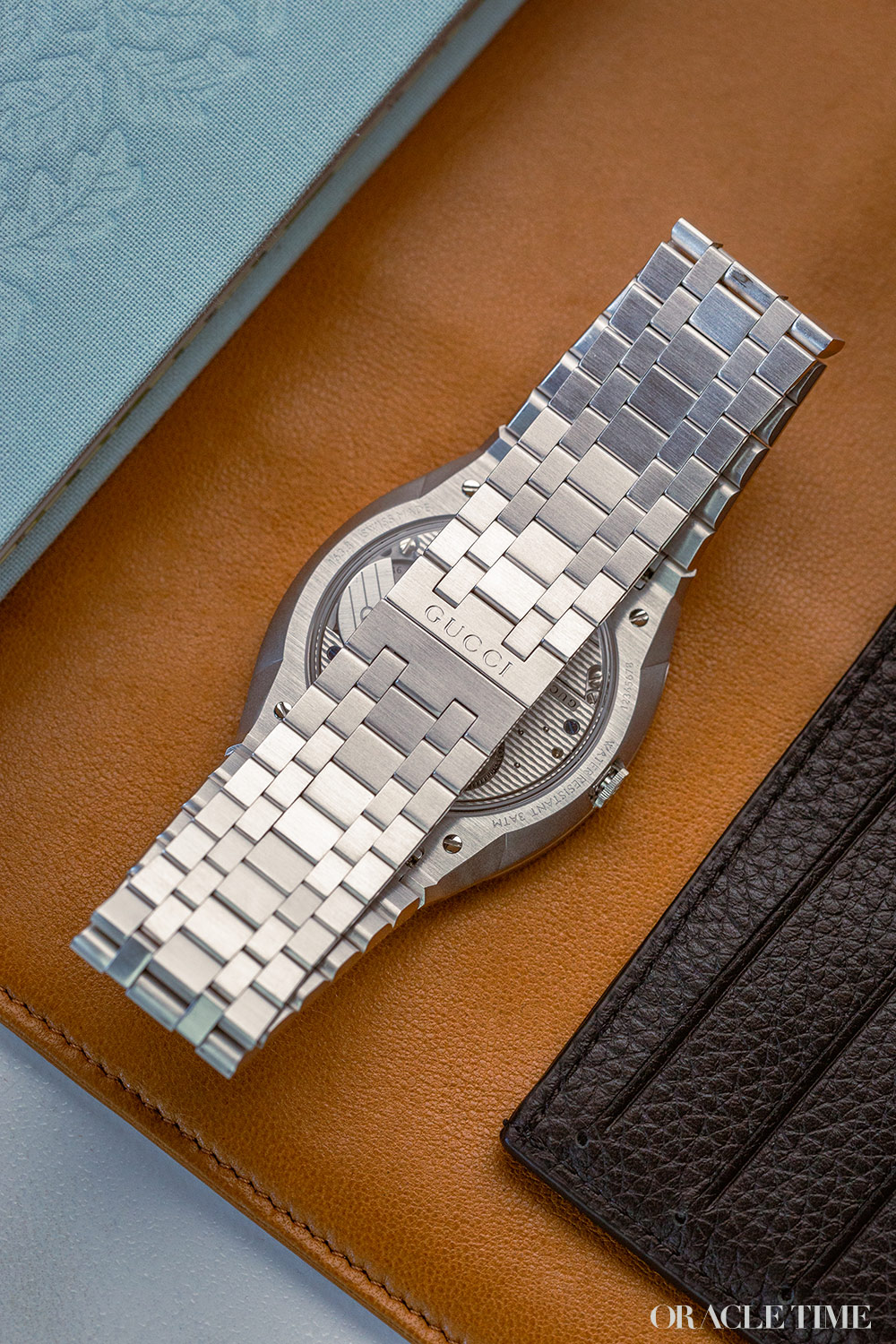 The real launching off point for the 25H collection is Gucci’s new automatic calibre, the GG727.25 – emphasis on the 7s. It’s the label’s first in-house movement and it’s a stunner. The micro-rotor equipped movement offers a solid 60-hour power reserve and finishing to match the dial, everything you could want from a proprietary calibre.

Yet that movement perhaps shouldn’t come as a big surprise. In case you didn’t know, Gucci is part of Kering group. So are Girard-Perregaux and Ulysse Nardin, two watchmakers with more than a bit of skill at the craft. Gucci has nicely leveraged that in-group expertise by making use of Kering’s La Chaux-de-Fonds manufacture to develop and build the GG727.25. 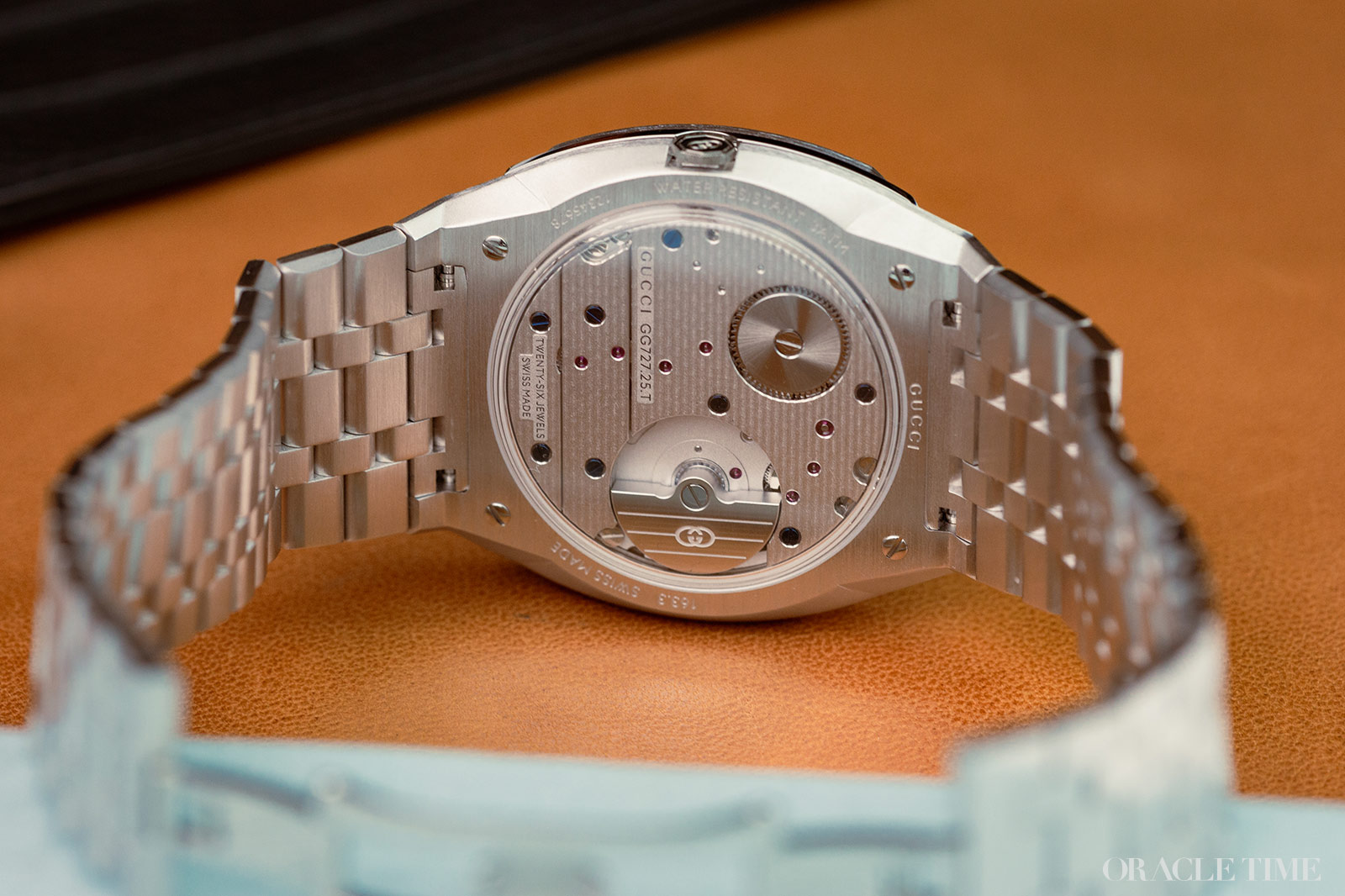 Both mechanical 25H models use the same movement with a slight variation, depending on whether you opt for the standard automatic or the tourbillon. Yep, in their inaugural in-house collection, Gucci is coming in hard with a tourbillon and, as you can see from our shots, it’s a serious statement piece. 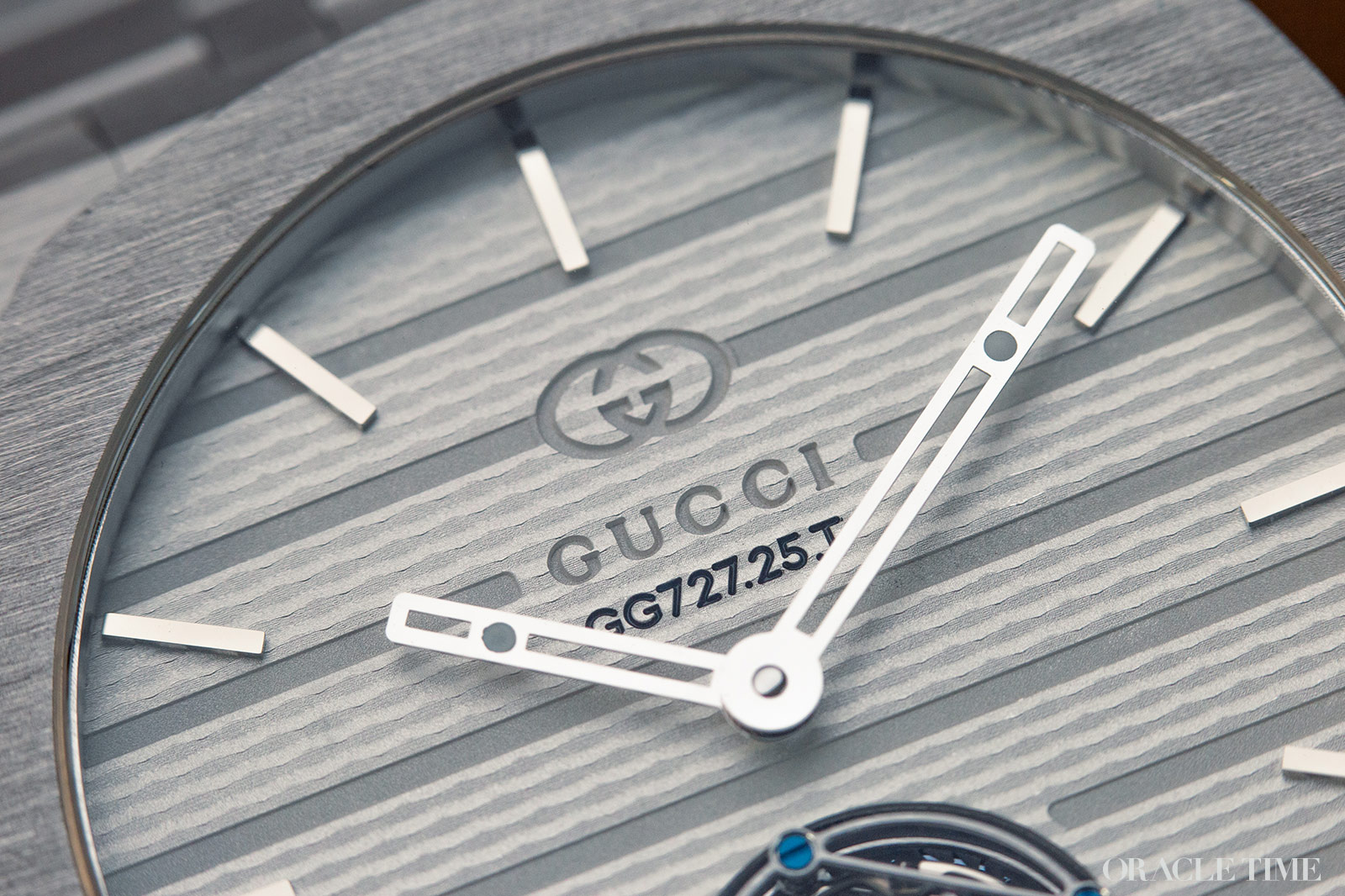 The 25H tourbillon has a very slim 40mm case, slighter than most 70s-inspired pieces in this vein and dressier. It’s all very sleek and stylish, interrupted only by the open tourbillon at 6 o’clock, complete with barred cage that fits in with the satin-brushed horizontal lines of the dial.

It’s a very well-made piece, that much is undeniable. I’m not all that sold on tourbillons as a complication, though them being the most gloriously over-the-top element in watchmaking has some charm. There’s a good reason it made the cover of our Hedonism issue. And as tourbillons go, this is a solid one, falling stylistically between the crazy avant garde stuff a handful of independent watchmakers are doing and the more classical fare from the likes of Breguet. 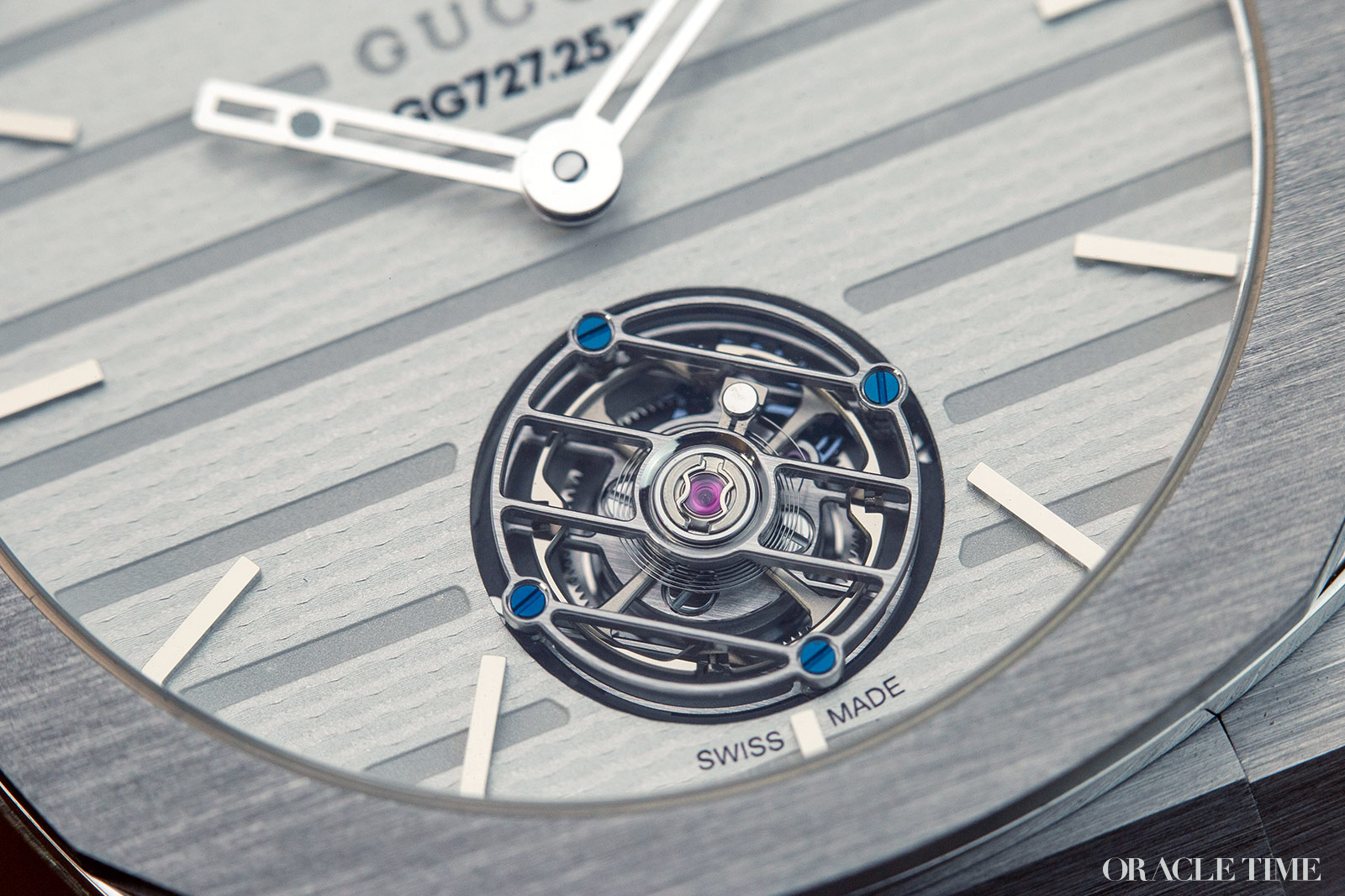 The tourbillon is available in platinum or gold; the automatic in steel or bi-colour as befitting their different positions in Gucci’s horological hierarchy. Both models however come on the same style of bracelet, a solid, incredibly comfortable 5-link number that might just be the best machined part of the entire watch.

While I’d have liked to see something between the automatic and tourbillon – a GMT would lend itself nicely to the design – the 25H leaves little doubt that Gucci is ready to bat for the big leagues. Between a solid in-house movement and a cool, 70s-esque design both backed by Kering’s watchmaking chops, the Italian fashion titan has definitely made a statement. I’m genuinely looking forward to seeing where they go with it next.

Vacheron Constantin demonstrate their mastery of artisanal crafts with the Métiers d’Art Tribute to...