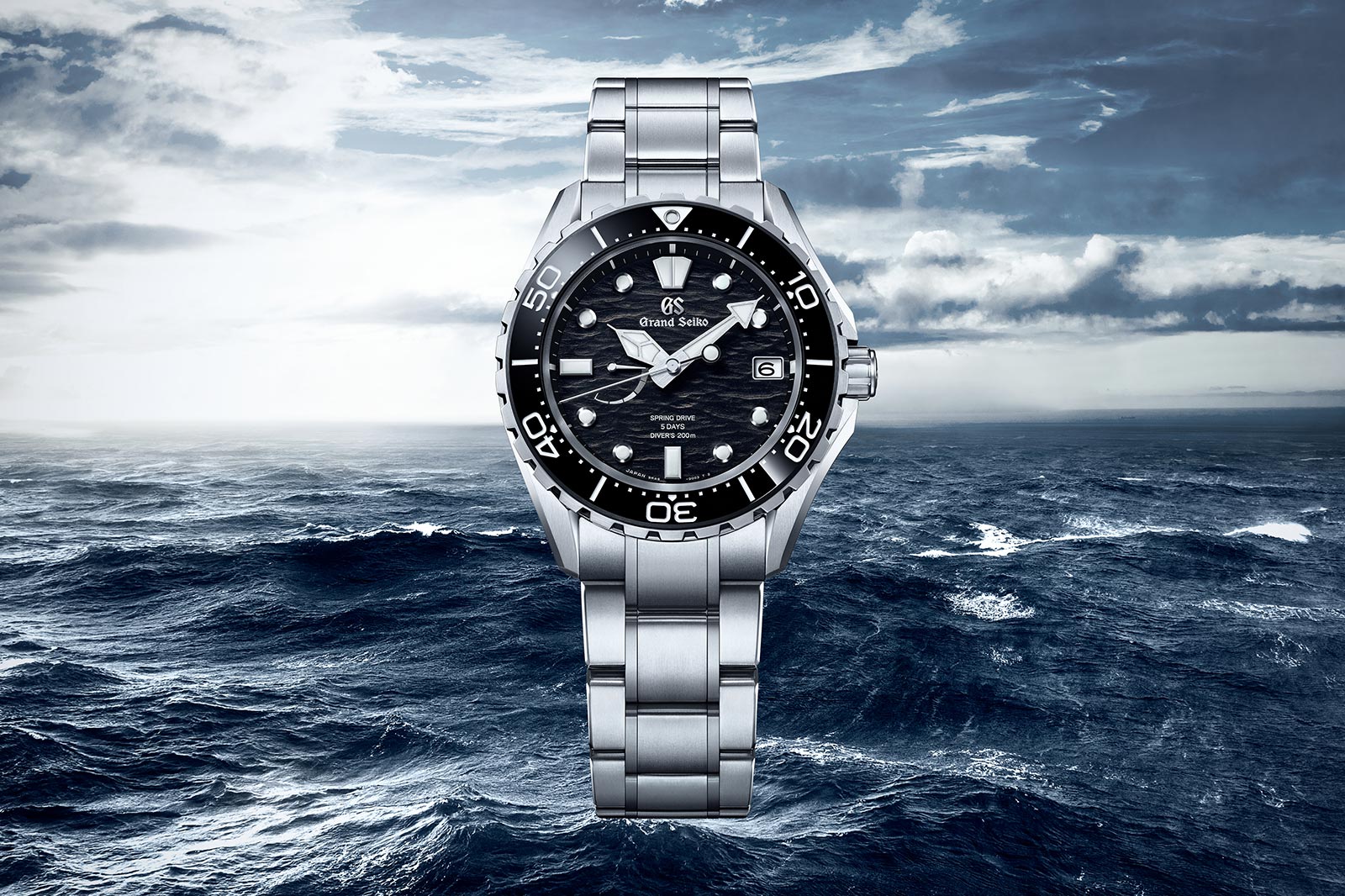 For 2022 Grand Seiko have been taking the exceptional execution of the dials in their Evolution 9 collection and applying it to GMTs and chronographs.The third of their new interpretations is the Evolution 9 Black Stream Diver.

In principle, while this is a diving tool watch, Grand Seiko have approached it like any other of their watches. Which means they’ve turned to the natural environment of Japan for inspiration, and there’s no prize for guessing that for a dive watch that inspiration comes from the coastline. As an archipelago, Japan is criss-crossed by dozens of strong underwater currents, one of the most prominent is the Kuroshio Current, AKA. The Black Stream. 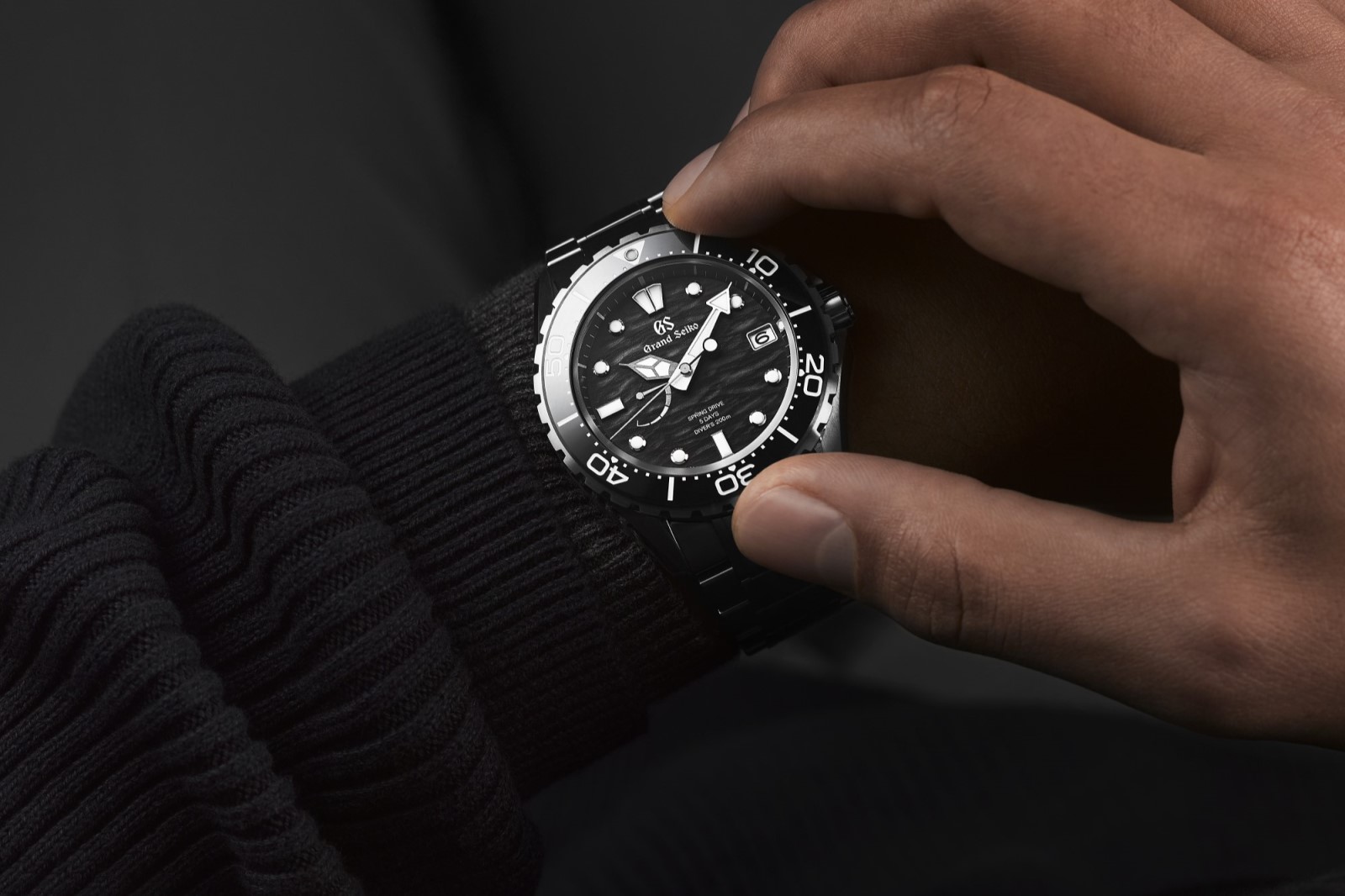 It’s an incredibly evocative name, conjuring images of swirling waters under the surface of the Pacific Ocean that are as deadly as they are beautiful. It’s this dangerous beauty that Grand Seiko have captured on the exquisitely textured dial, which has erratic ridges and divots emulating the flow of water. With a name like Black Stream the predominant colour is of course black, which works well on a diving watch because it means the texture doesn’t distract from the readability of the piece. That readability is well assured by large hands and lumed indexes. 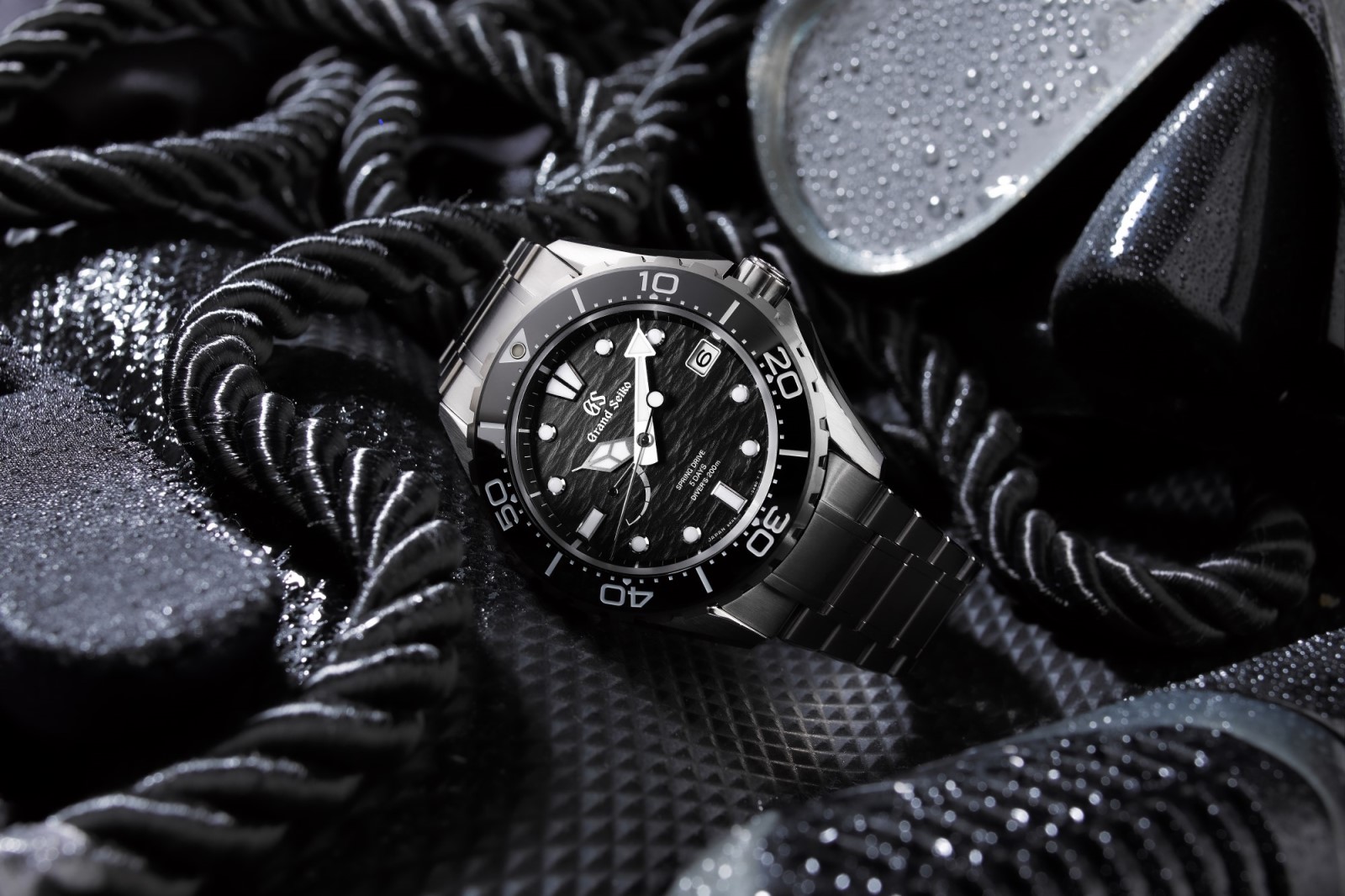 This is also the first Evolution 9 to have water resistance of 200m, with the existing range touting 100m. Stylistically the case has changed very little though, with the same sporty, facetted design we’re starting to become familiar with. Like the other new models, it’s made from high intensity titanium. Although as a dive watch there are some notable adaptations, namely the chunky dive bezel that has a ceramic insert with a thick grip and the fact the watch has a solid caseback. Regarding size, at 43.8mm it’s actually smaller on the wrist than the new chronographs. 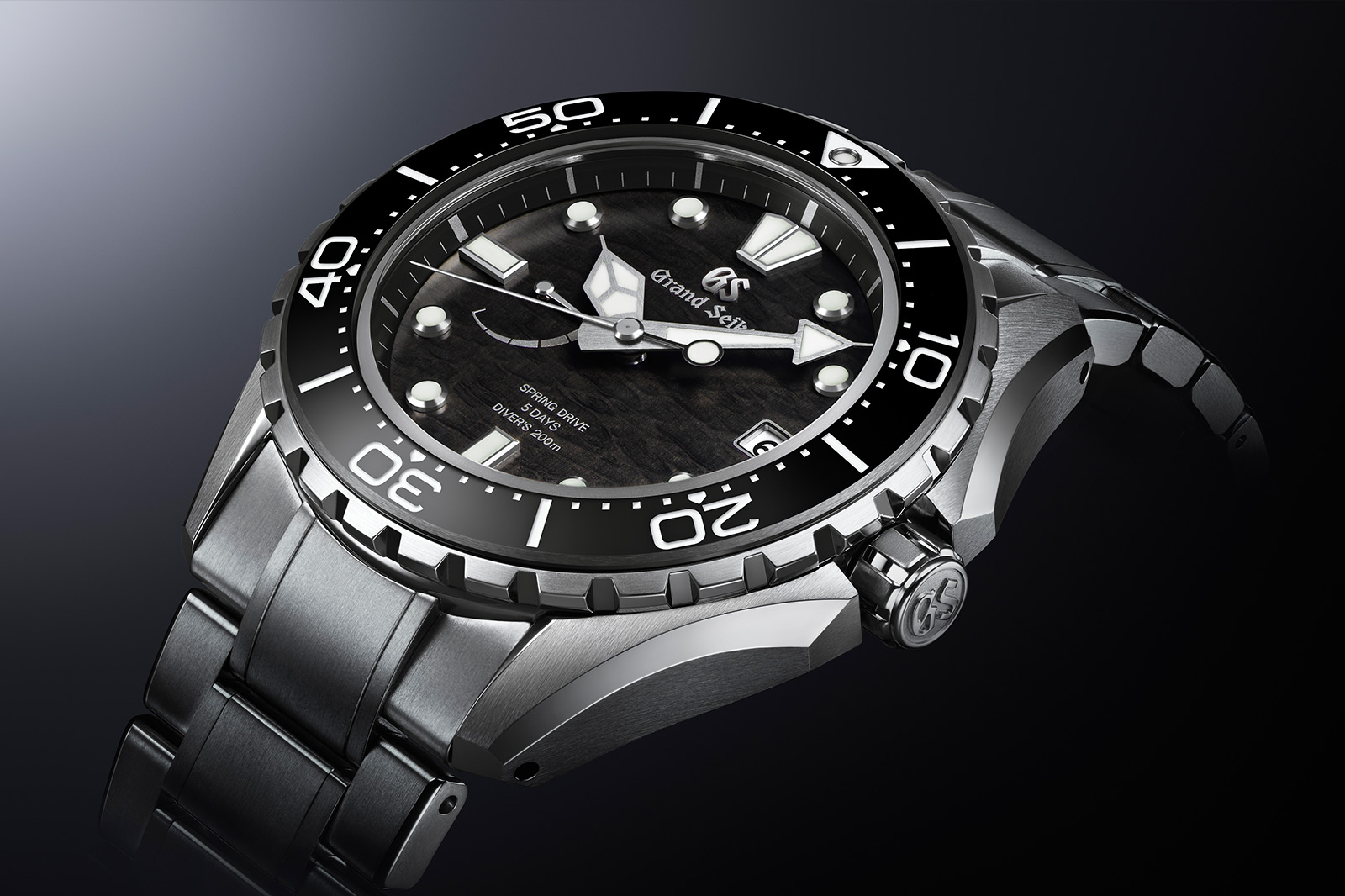 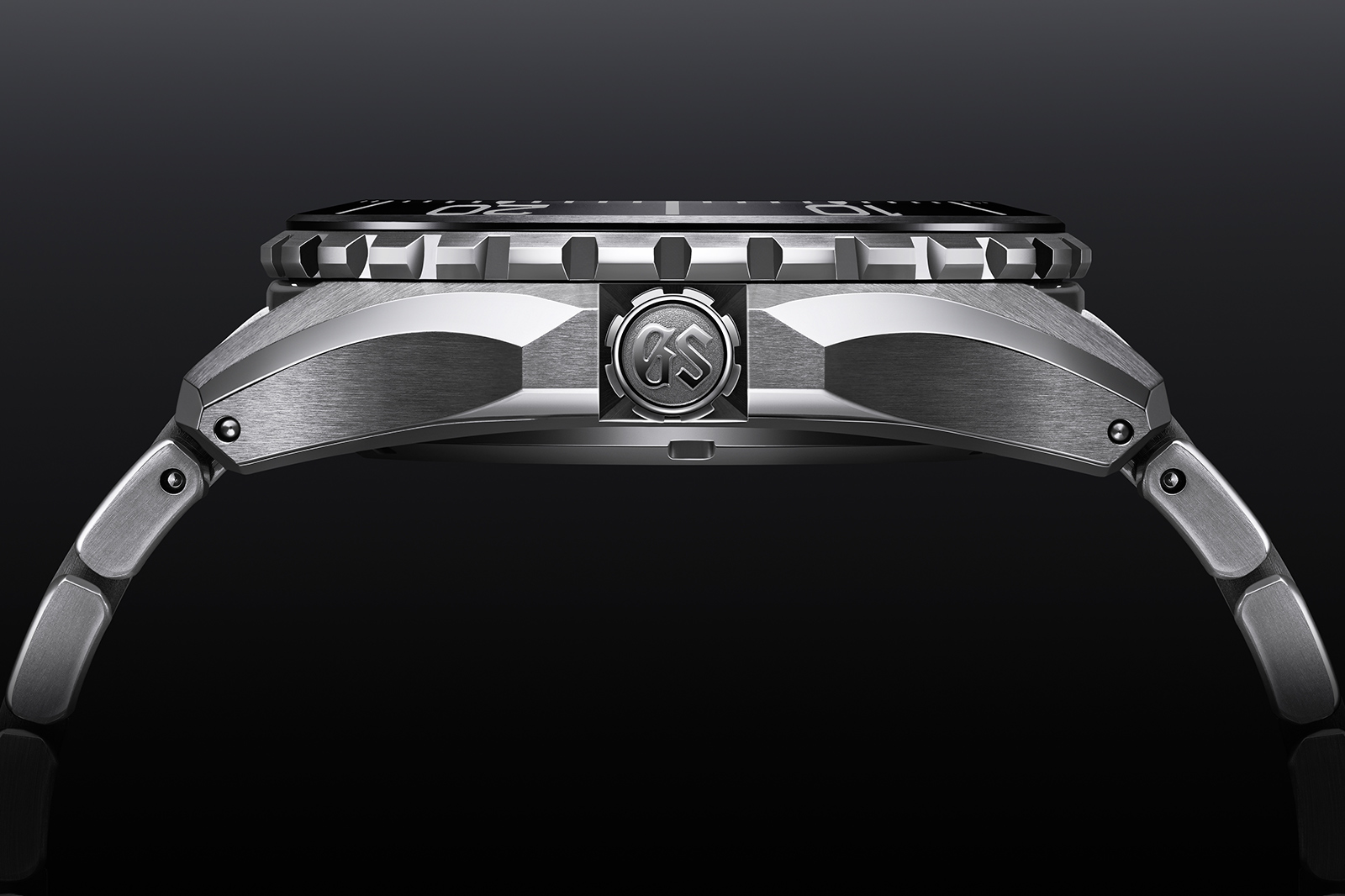 Inside, the Grand Seiko Evolution 9 Black Stream Diver houses the 9RA5, an automatic movement with a power reserve of 5-days. You can monitor that reserve through the power reserve indicator at 9 o’clock, balanced at 3 by the date window.

It’s priced at £9,970, which is a lot considering that many brands including Seiko produce stylish, functional tool watches for a lot less, such as the Prospex ‘Save The Oceans’ Special Editions. However, there’s a level of detail and finishing that you can’t find anywhere except Grand Seiko and that’s also true of the Black Stream Diver.