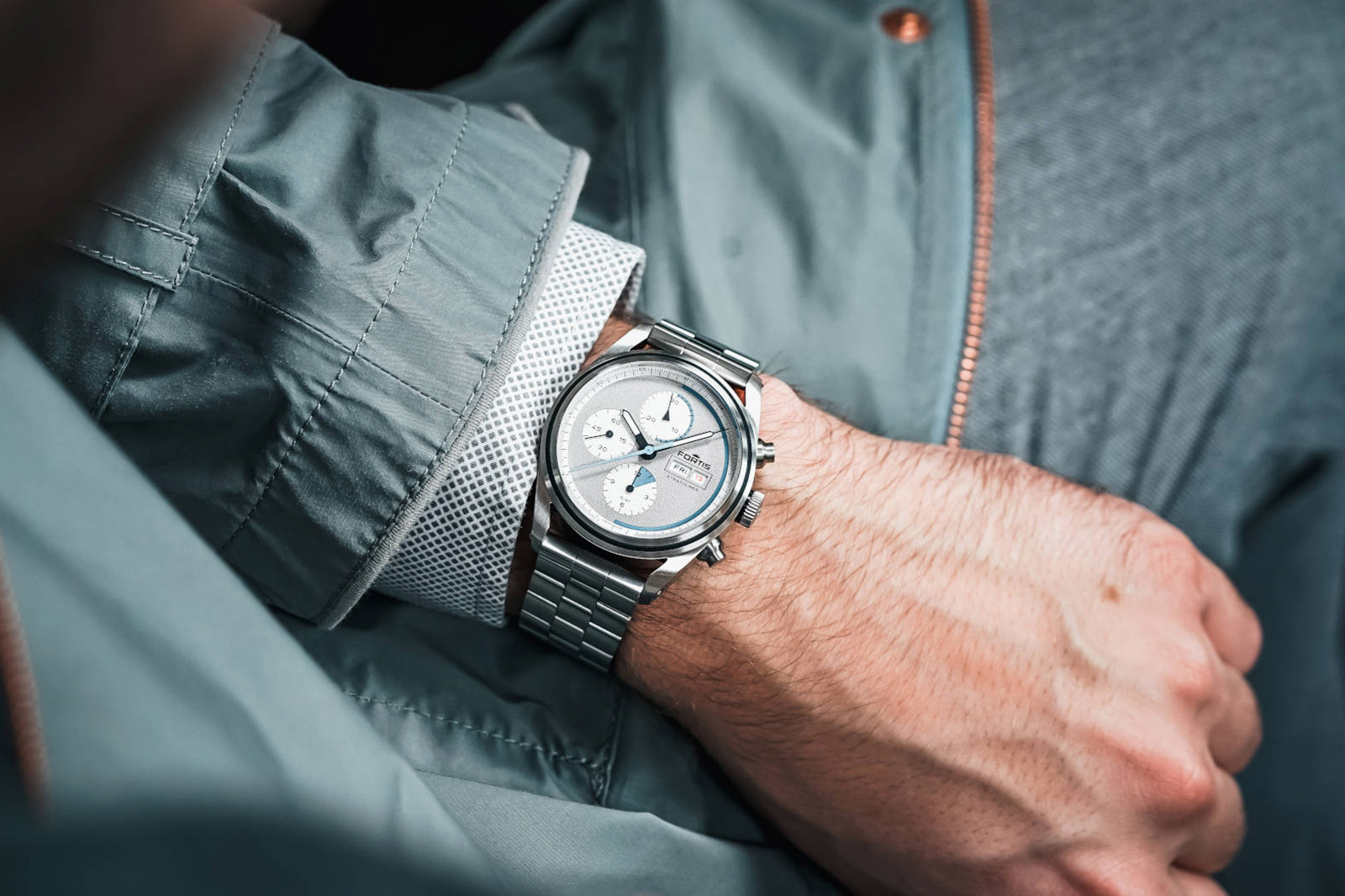 I don’t think it’s controversial to say that space is really, really, really cool. It’s little wonder that humans have been obsessed with space for centuries. However, it’s only recently (on the cosmic timeline) that humanity has been able to journey into the inky black. And for as long as people have been travelling in space they’ve been travelling with watches, the most famous being the Omega Speedmaster Moonwatch. But Fortis’ new Stratoliner Chronograph, the first wristwatch tested in space, may well challenge Omega for that title.

Ok, admittedly the claim that the Stratoliner watch as a whole was tested in space is a minor piece of hyperbole. What is accurate to say is that the brand new movement housed inside the Stratoliner, christened the WERK 17, was tested in the stratosphere – the level of atmosphere above the troposphere where we live. 13 movements were carried 30km above the surface of the Earth on a giant helium balloon where they had their performance data recorded. 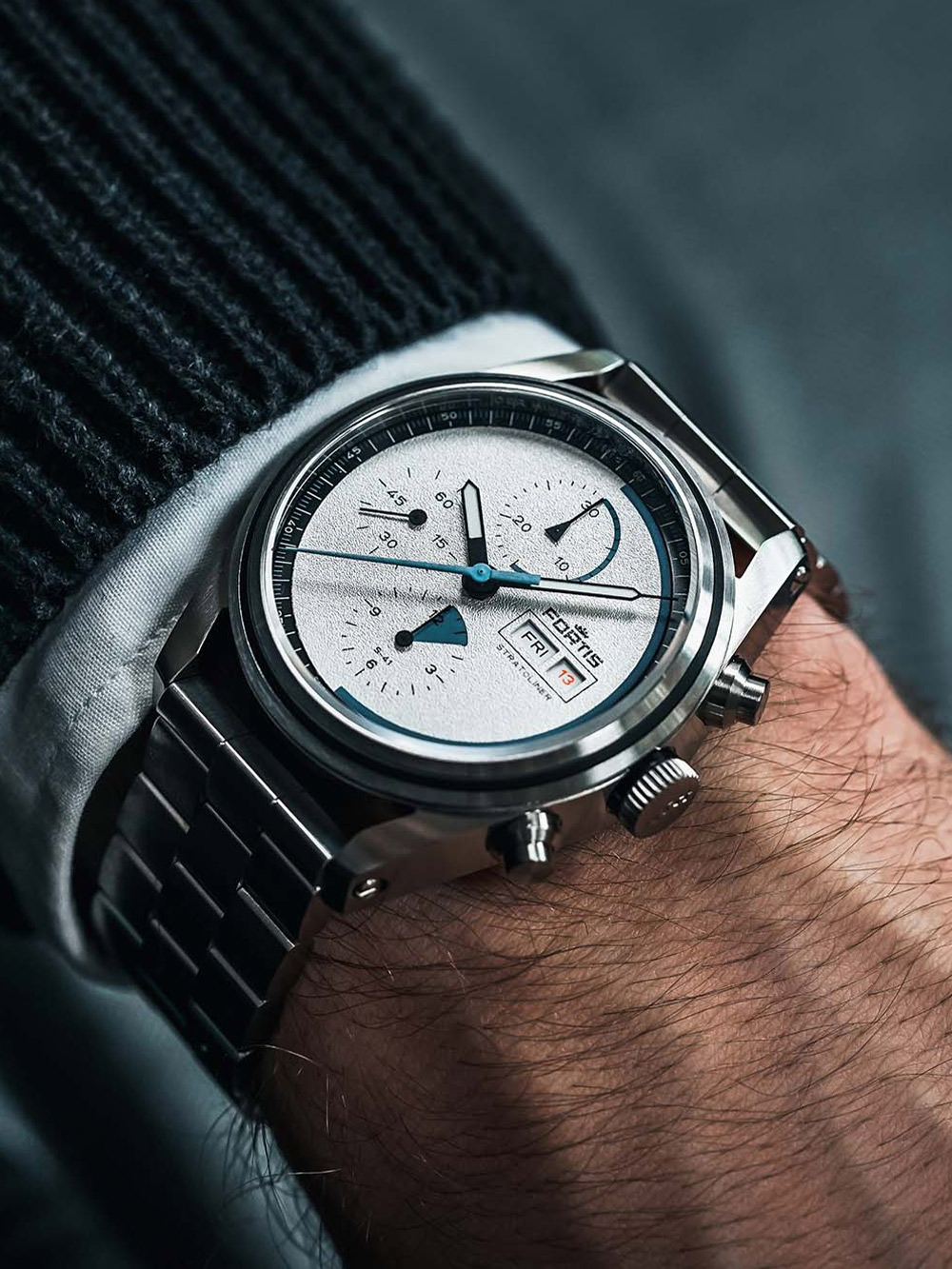 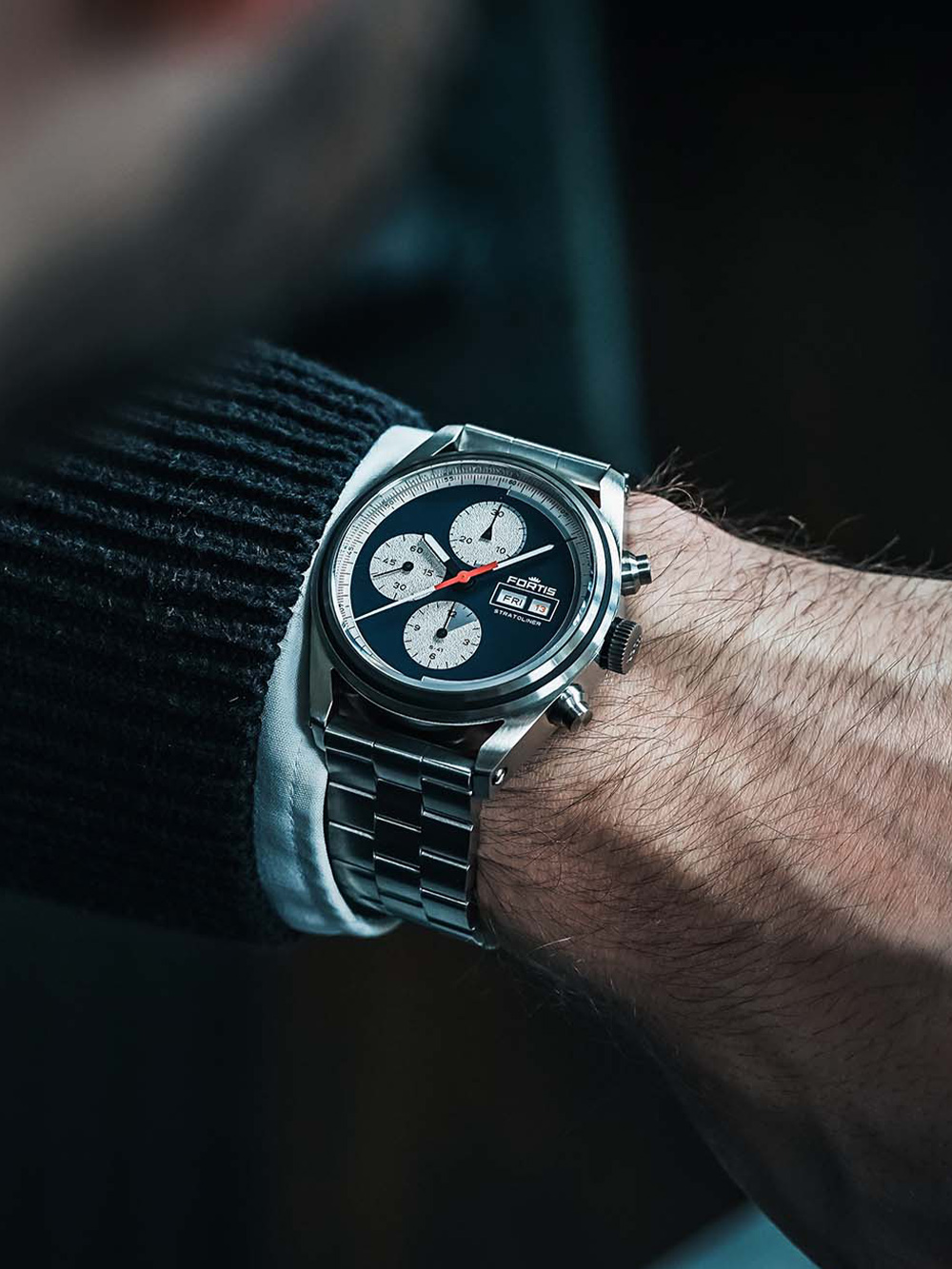 The importance of this is that, while there are many watches that have been into space and found to operate properly, no watch has been specifically tested for its performance in space prior to production. Research like this is vitally important if humans are ever to achieve extended space travel – similar to the recent announcement that moon soil is capable of growing plants.

Ultimately the WERK 17 calibre is unique in the history of horology as it’s the only one that can claim to be “strato-tested”. Although on a horological level the WERK 17 is a pretty simple column wheel chronograph with a 60-hour power reserve. But for cool points, it’s unrivalled. Although if you want a watch that’s spent a full year in space, check out this Omega that went to auction recently. 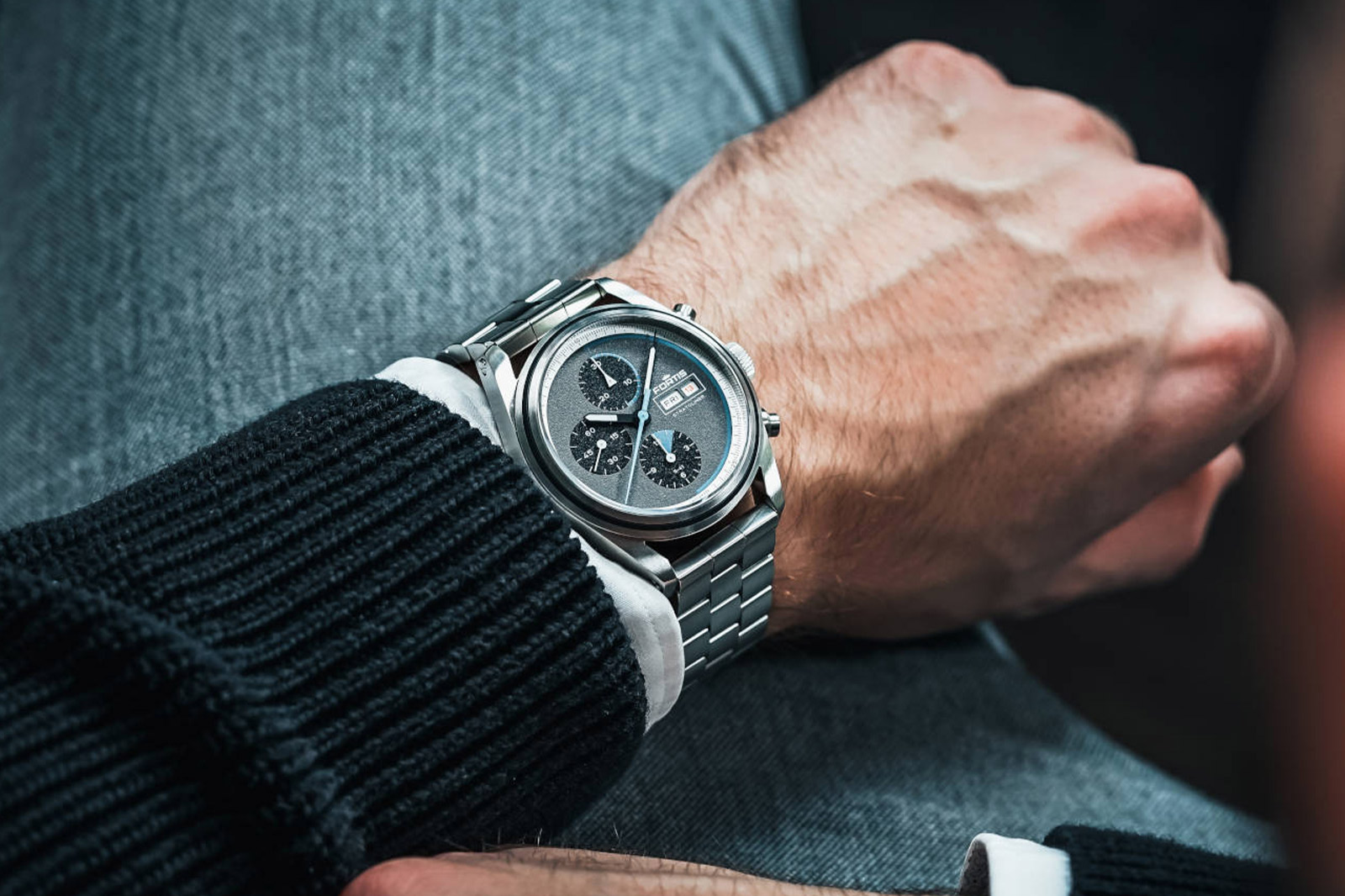 That level of cool puts a lot of pressure on the timepiece housing the WERK 17 to be equally impressive. And fortunately the Stratoliner is. It has a 41mm diameter case made from recycled stainless steel, angled lugs, fairly short pushers and a knurled crown. Stylistically it manages to look like an instrument panel that you’d find on a futuristic spaceship.

Its dial, available in white, cool grey, cosmic grey and Japan blue, has a fine granular texture designed to represent space dust. There are a trio of chronograph subdials with a 30-minute timer at 12 o’clock, 12-hour timer at 6 and small seconds at 9. The 3 o’clock quadrant is occupied by a day-date aperture. In addition to the primary colouration of the dial, there’s secondary accents in light blue or grey found on the 30-minute, 12-hour and chronograph seconds scale. Those accents are designed to make it easier to time the various stages of a low-orbit flight – think Bezos and Branston. 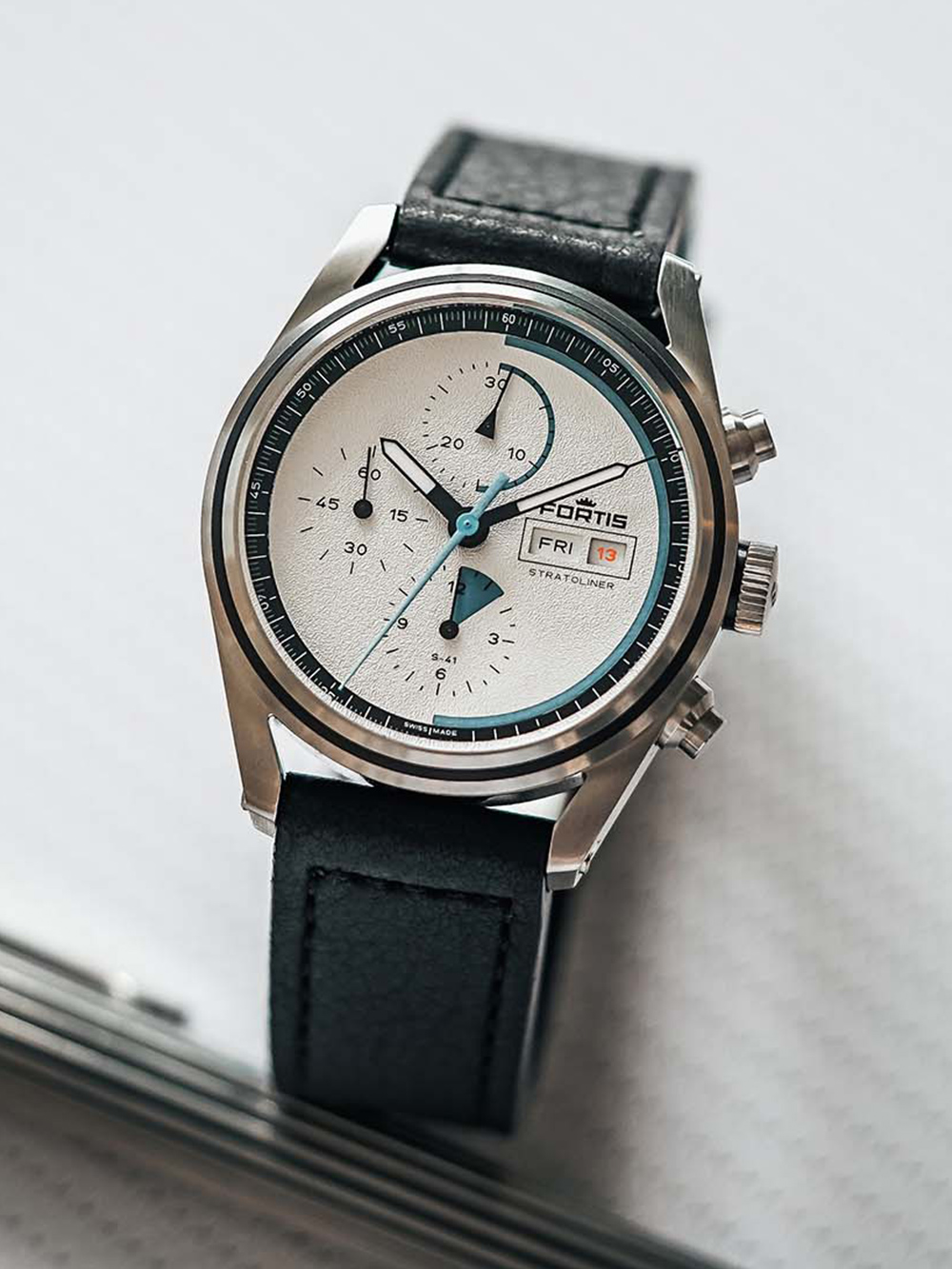 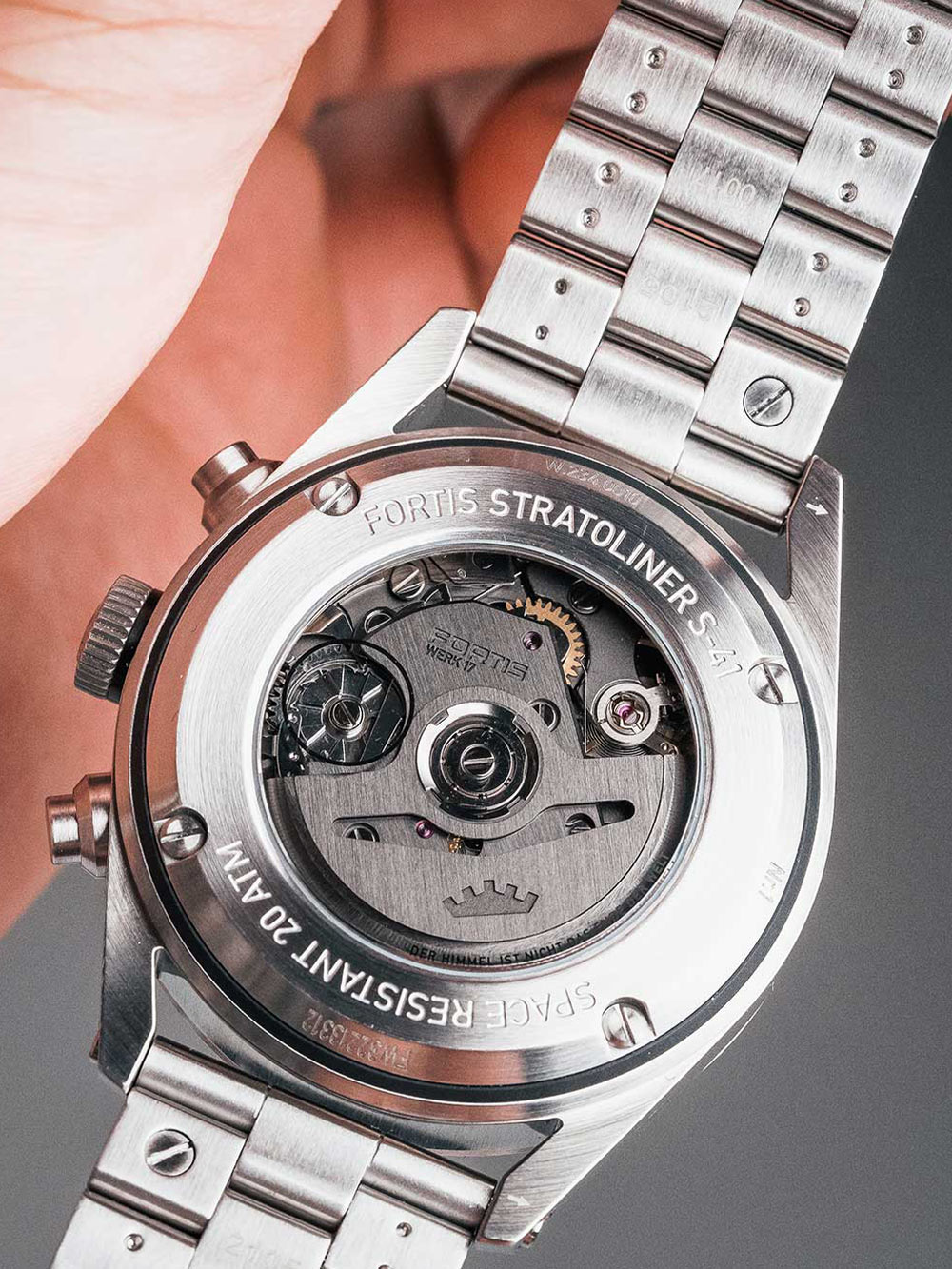 On the reverse side of piece is a tinted exhibition caseback that provides a view of the WERK 17 movement. There’s a small un-tinted window that provides a clearer view, inspired by spaceship portholes. Around the periphery of the movement is the phrase “The sky is not the end of the world” written in Germany and on the metallic portion of the caseback is the inscription Fortis “Stratoliner S-41, Space Resistant 20 ATM”. 20 ATM is actually the watch’s water resistance rating (200m) written in terms of atmospheric pressure. Although I think space would technically have 0 ATM pressure, but I’m no astrophysicist and Space Resistance is a nice joke.

The grey and white editions of the Stratoliner are available now at €5,300 (approx. £4,500). The Japan blue version will be available from July at the same price. Regardless of which colourway is your favourite, this is one of the most intriguing watches launched this year, playing an active role in scientific research and space exploration. It just remains to be seen whether it will stand up to the challenges of open space beyond any influence from Earth’s atmosphere, which Fortis claim is the ultimate goal.