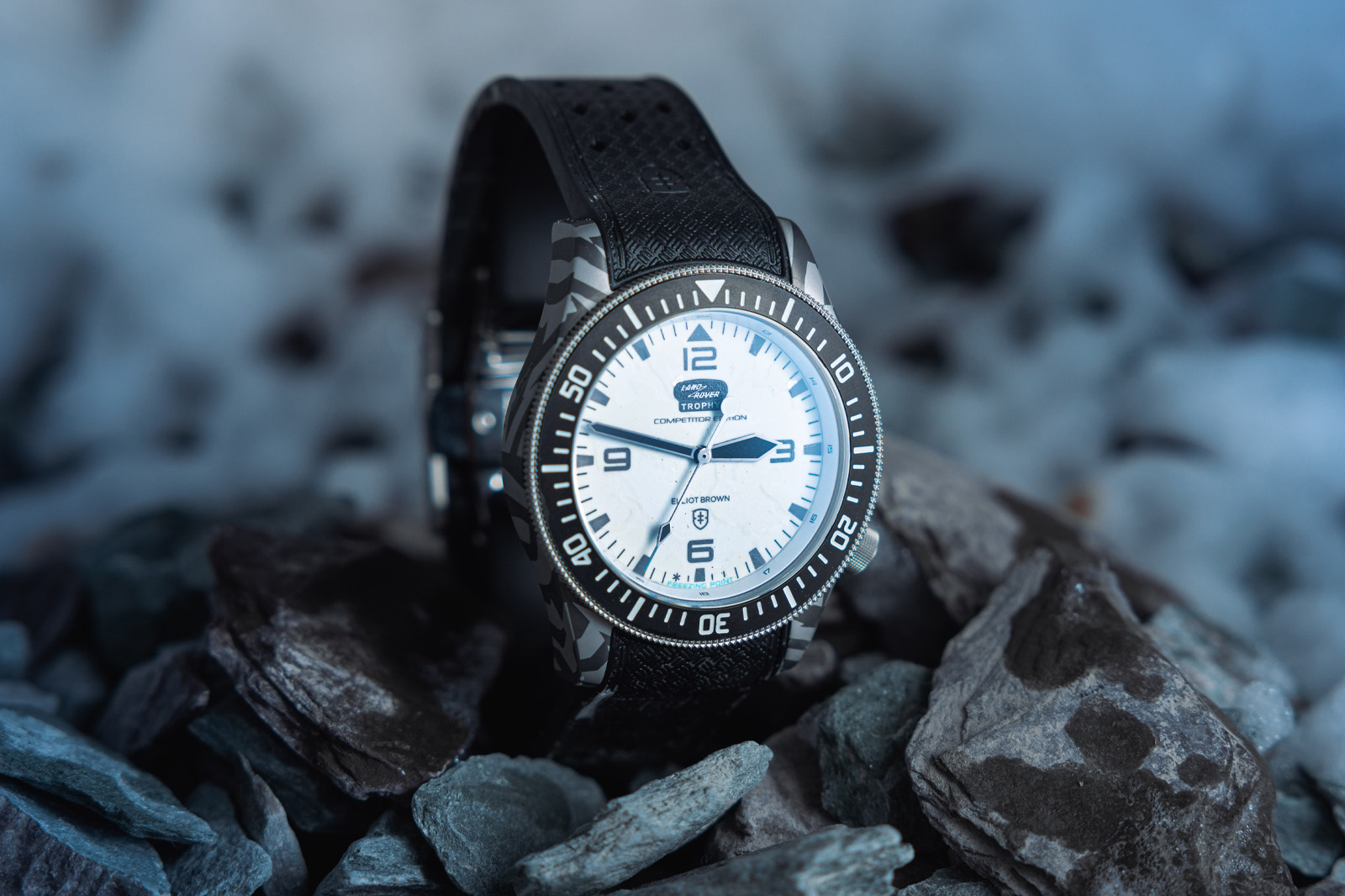 When setting out on an expedition, there are two pieces of equipment that you need to have the utmost faith in: your car and your wristwatch. On that front, Elliot Brown and Land Rover have got you covered with the new Classic Defender Works V8 Trophy II limited edition collaboration. At the simplest level, Elliot Brown have created a limited edition variant of the Holton Professional to coincide with the launch of the new Classic Defender Works V8 Trophy II from Land Rover. The vehicle is built for expeditions of all types with the signature reliability of Land Rover and camouflage pattern bodywork.

The same technical camouflage pattern is replicated in lume on the Elliot Brown’s dial in white, pale blue and light green. There’s also a hidden silhouette of a Land Rover driving on top of the logo at 12 o’clock that’s only visible while the lume is shining. And to make sure the lume can shine whenever you want, the watch comes with a UV torch. 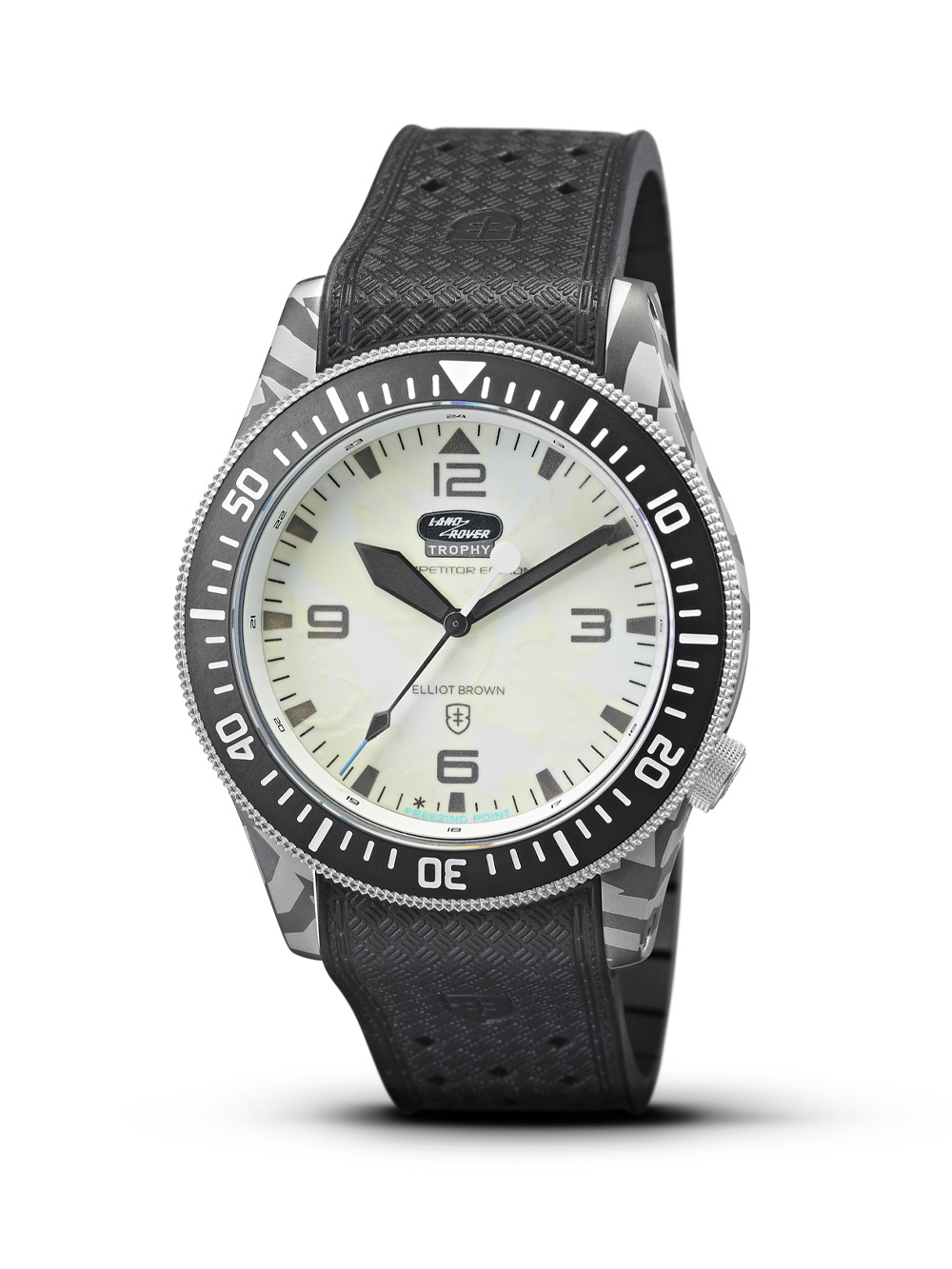 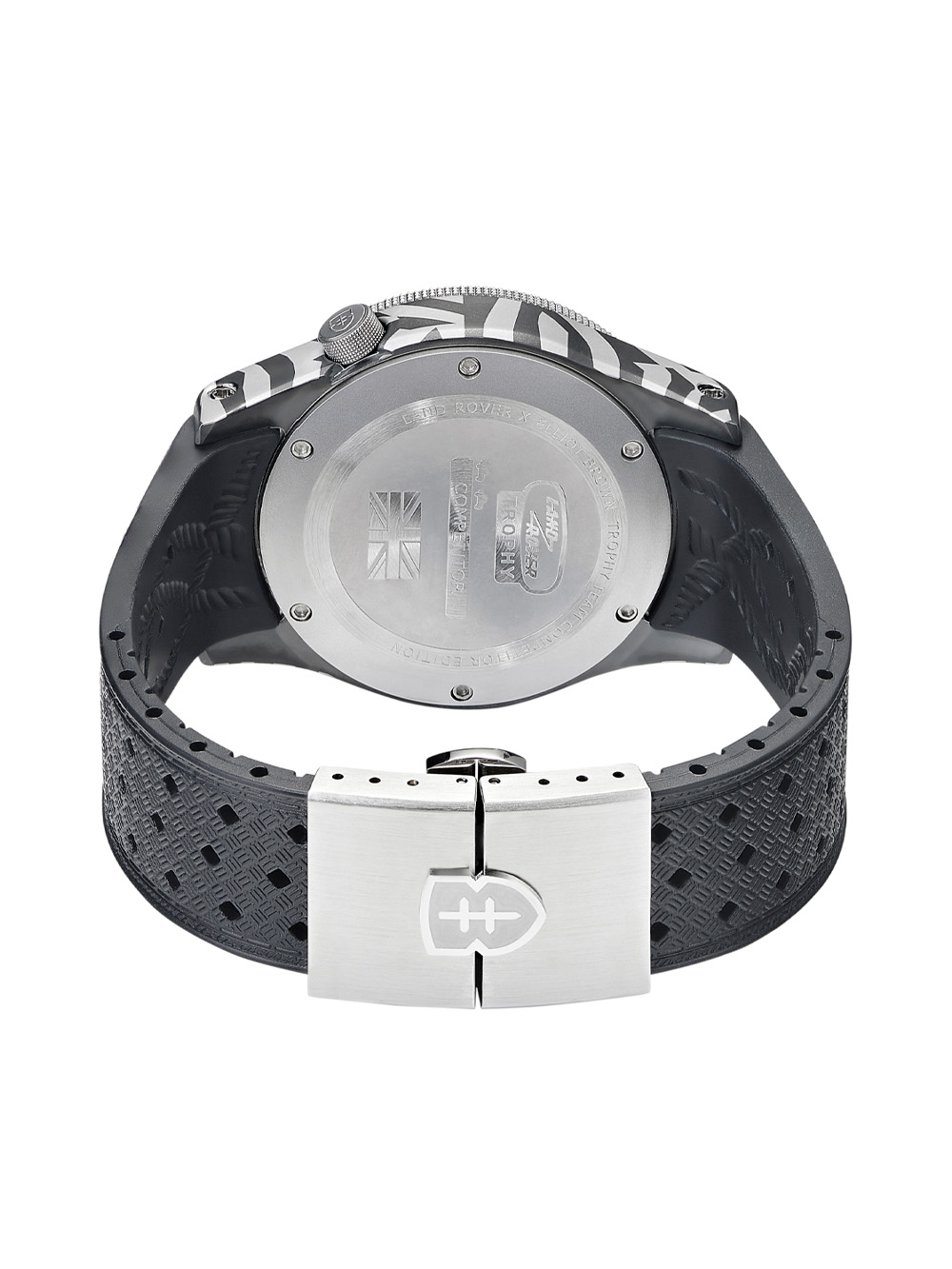 However, the dial isn’t the only form of camouflage to be found on the Classic Defender Works V8 Trophy II. The 43mm diameter stainless steel case features a dazzle camo motif created from black PVD. It’s a visually striking design and adds a sense of adventure and fun compared to the serious aesthetic of the Holton Professional. Although it’s somewhat ironic that by adding camouflage the watch becomes less military focussed. 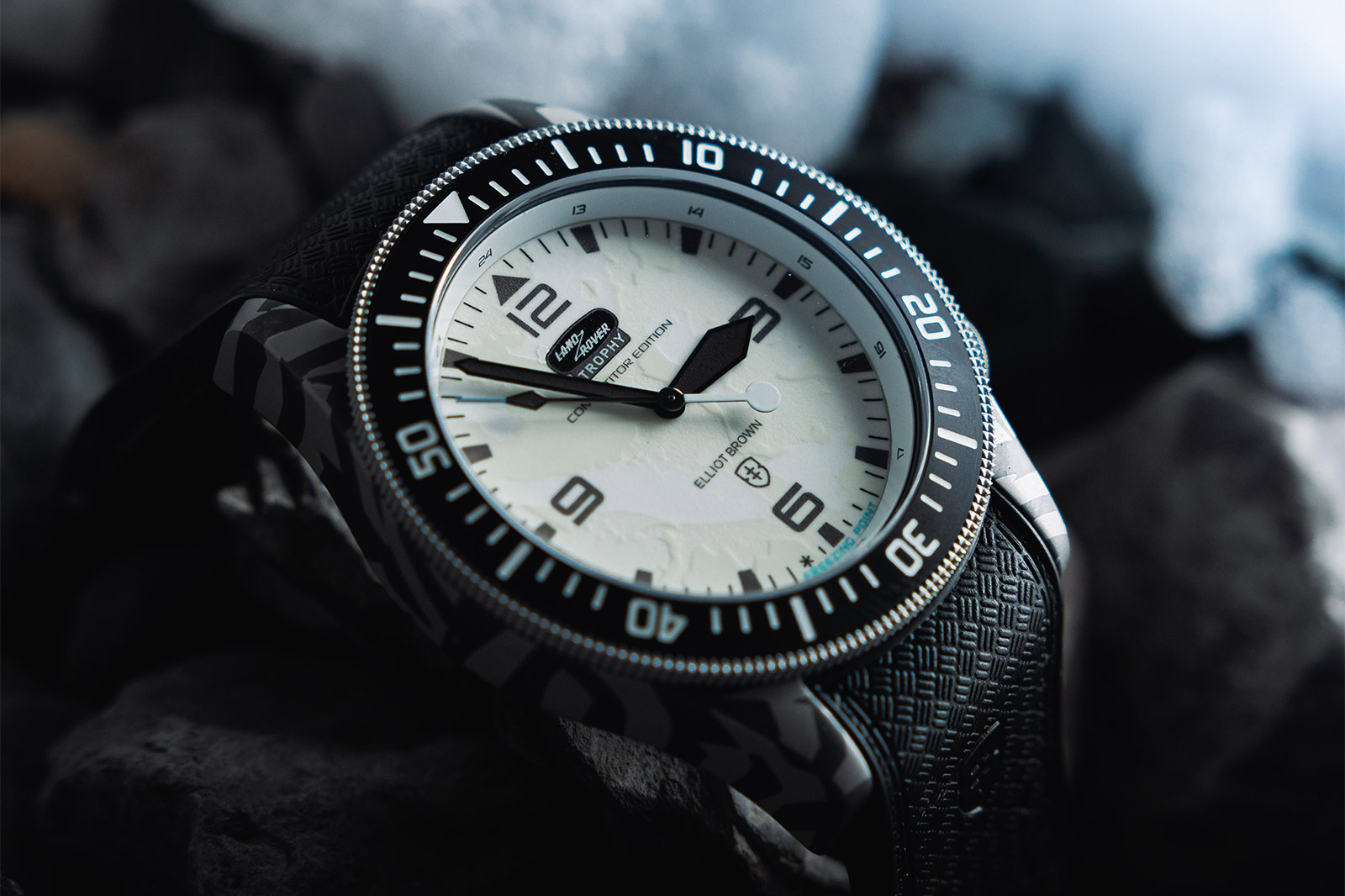 Additional elements that have been updated for the Classic Defender Works V8 Trophy II include a redesigned seconds hand with ice blue tip and white counterbalance. There’s also a snowflake and the inscription ‘Freezing Point’ at the 32 minute marker, as a reminder that 32°F is freezing point, which is useful if your expedition is in the USA. 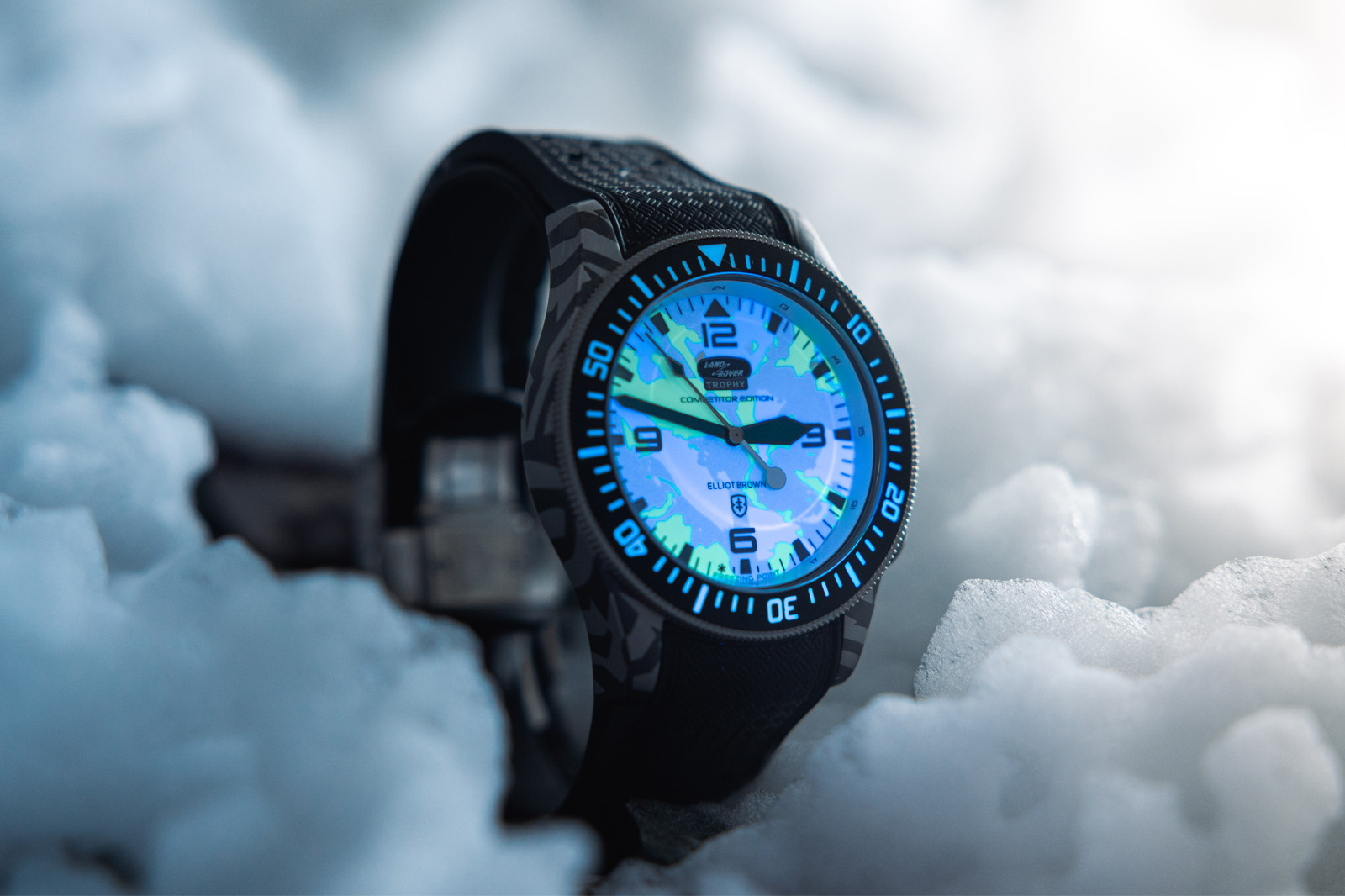 Powering the watch is the Swiss Ronda 715 quartz movement. It’s hidden under a solid steel caseback engraved with the Land Rover Trophy logo. The solid practicality of a quartz movement shouldn’t be understated even if the collector in all of us would prefer a mechanical calibre. 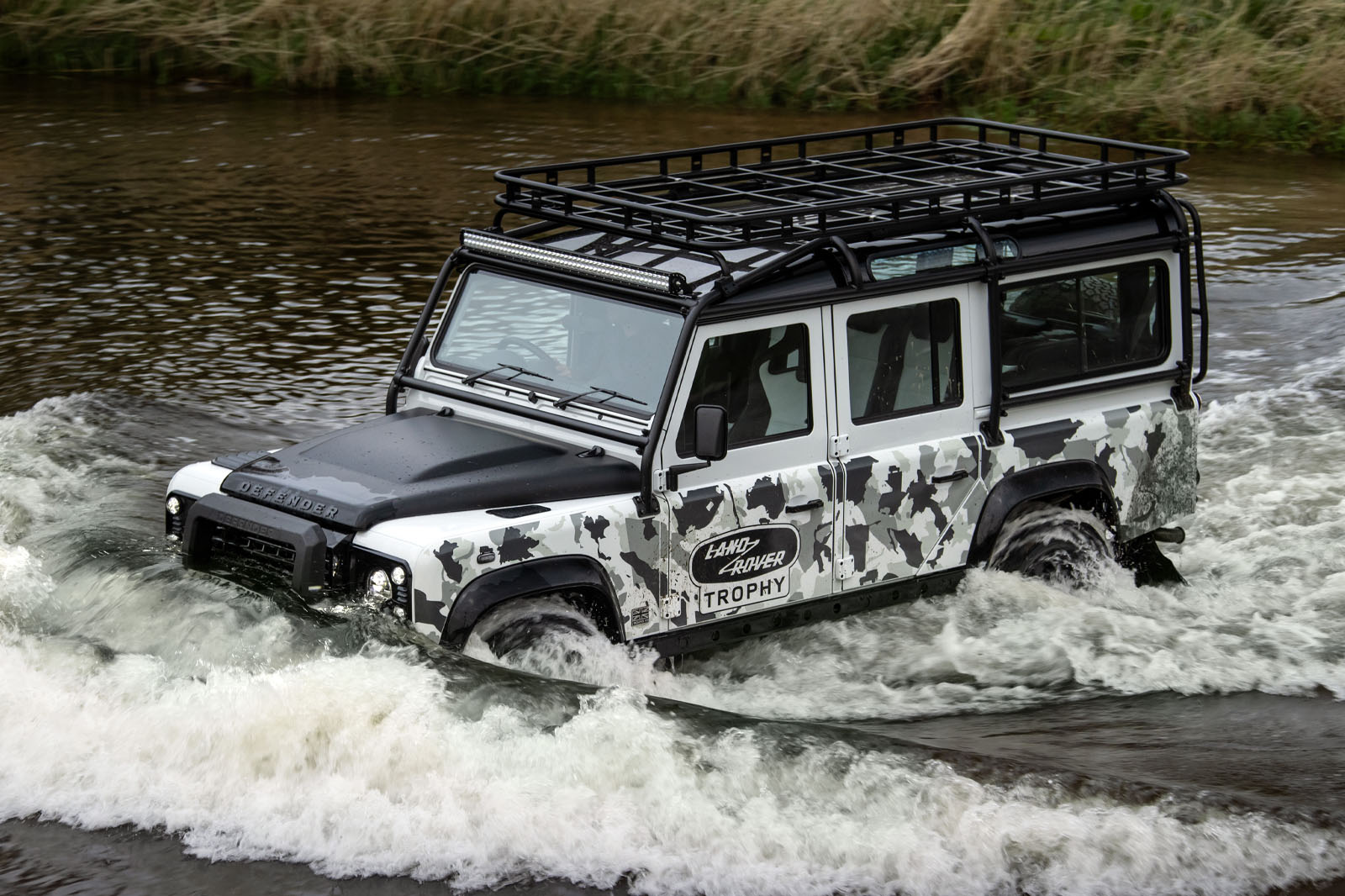 Regarding availability, there will be 1000 Elliot Brown Classic Defender Works V8 Trophy II watches available for sale at £595. But that’s not the full story because a special ‘competitor’ edition will also be offered to customers who purchase the actual Land Rover Classic Defender Works V8 Trophy II car. Buying the car also comes with an invitation to a three-day competition with Land Rover Classic, for which Elliot Brown is the official timing partner.