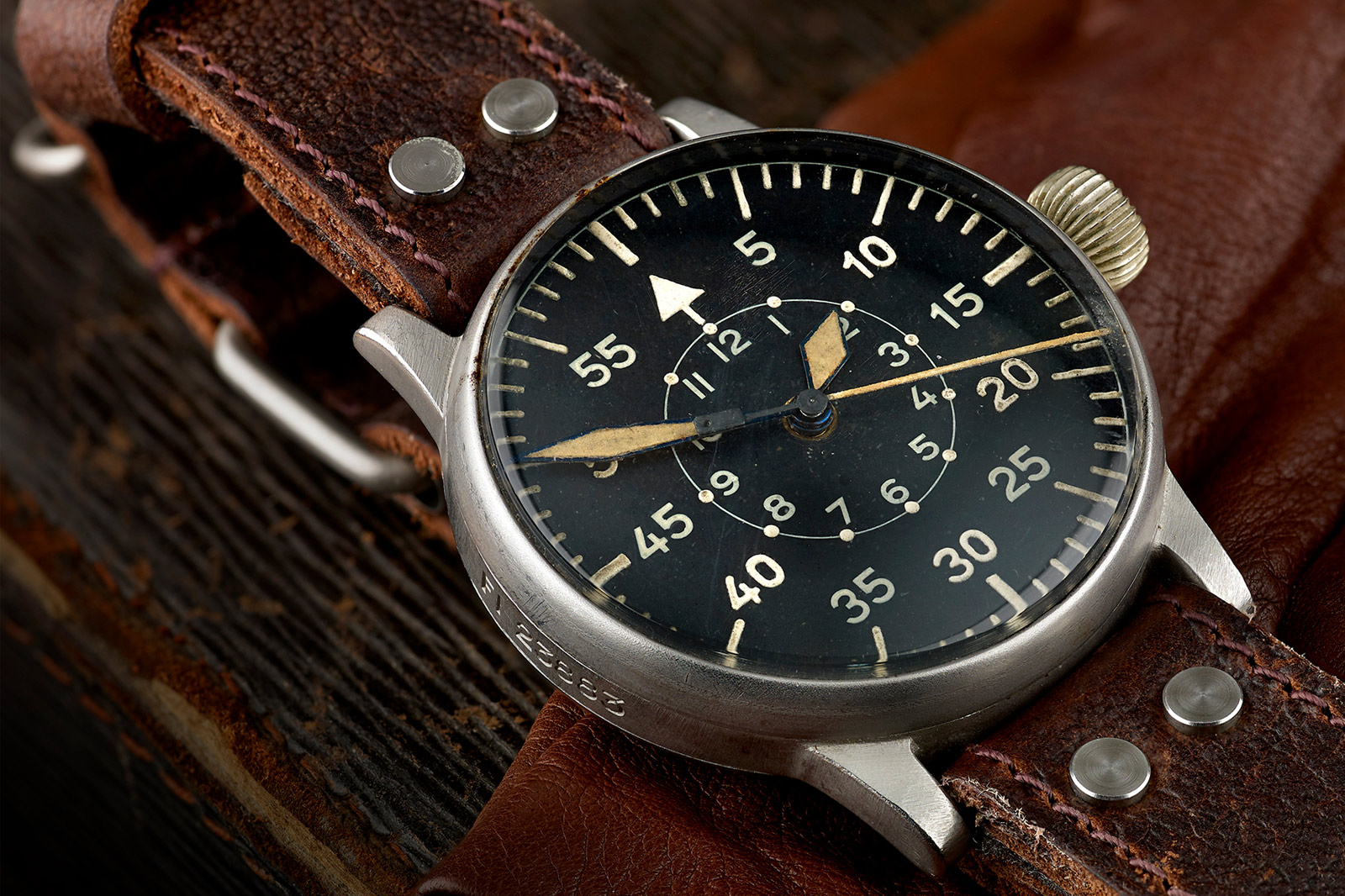 Today Germany has a watchmaking culture more significant than all but that of Switzerland. It’s not just the watchmakers themselves, though names like A. Lange & Sohne, Glashütte Original, and Nomos Glashütte aren’t exactly unimportant. It’s more in the identity of east German watchmaking, particularly Saxon, that mix of minimalist Bauhaus and refined understatement, that’s come to define it. But it wasn’t always like this. Far from it, in fact.

Back in the 1950s the majority of watchmakers in the German Democratic Republic of East Germany worked together in a single company, the Volkseigener Betreib (VEB) Glashütter Uhrenbetreib (GUB) – which loosely translates to The People’s Company of Glashütte Watchmakers. 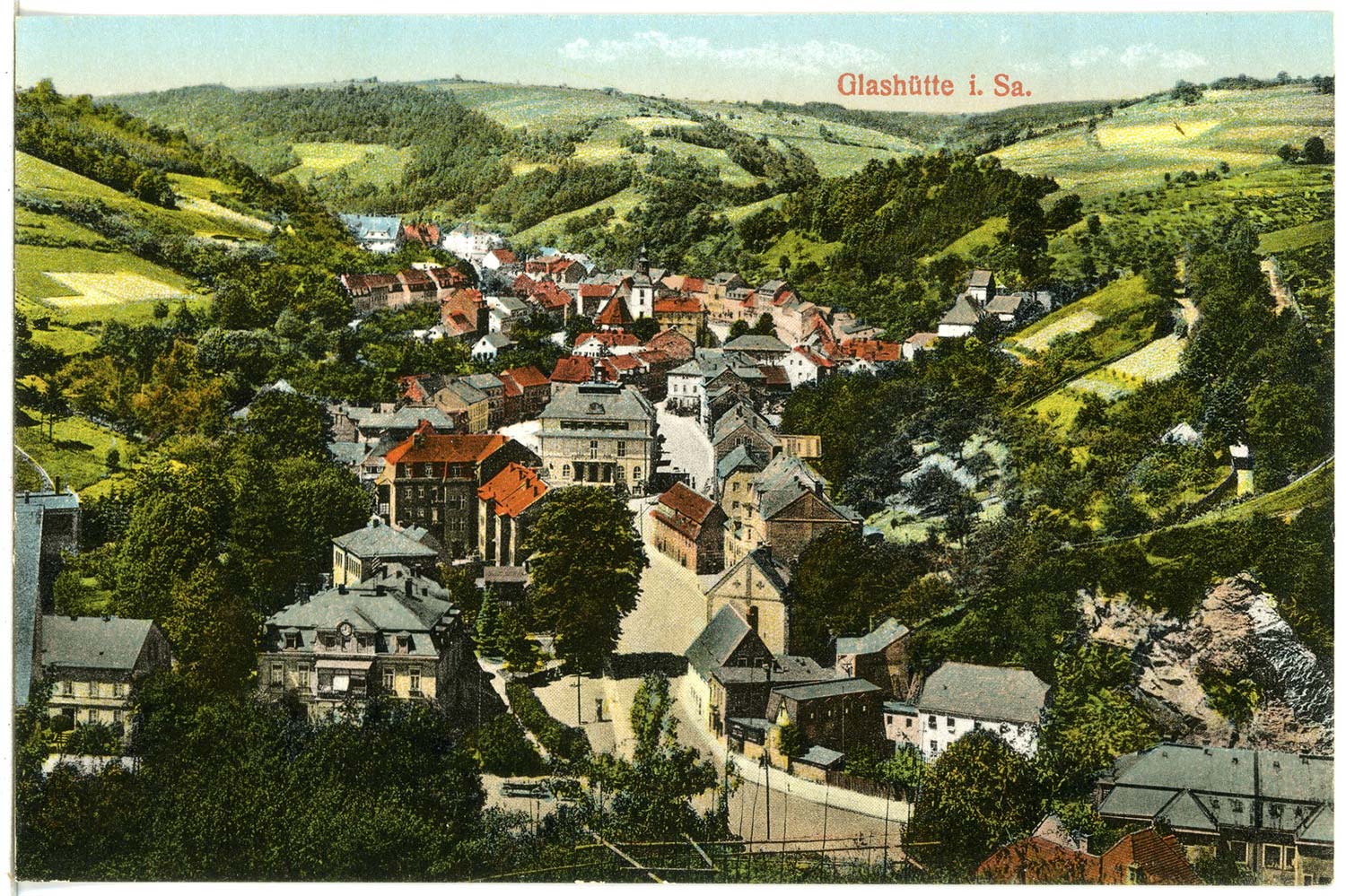 It was a time when East Germany was more or less a puppet state for the Soviet Union in the post war period and the USSR being the USSR, they relocated a huge number of German industries to Russia. As such, the few industries that remained were shells of their former selves – no one talks about Wartburg cars any more because by and large they couldn’t compete with Western alternatives. The poor quality of East German goods is legendary in its own way. With one exception, East German watches flooded into the West and the West loved them.

To understand why GUB watches were a surprising success, it’s important to understand how GUB was formed. The story starts in the late 1800s when Germany was a place of important horological growth with watchmakers like Ferdinand Adolf Lange and Robert Mühle creating their workshops and legacies. They grew into household names alongside brands like Lacher & Co. (which we now know as Laco), Wempe, and Stowa. 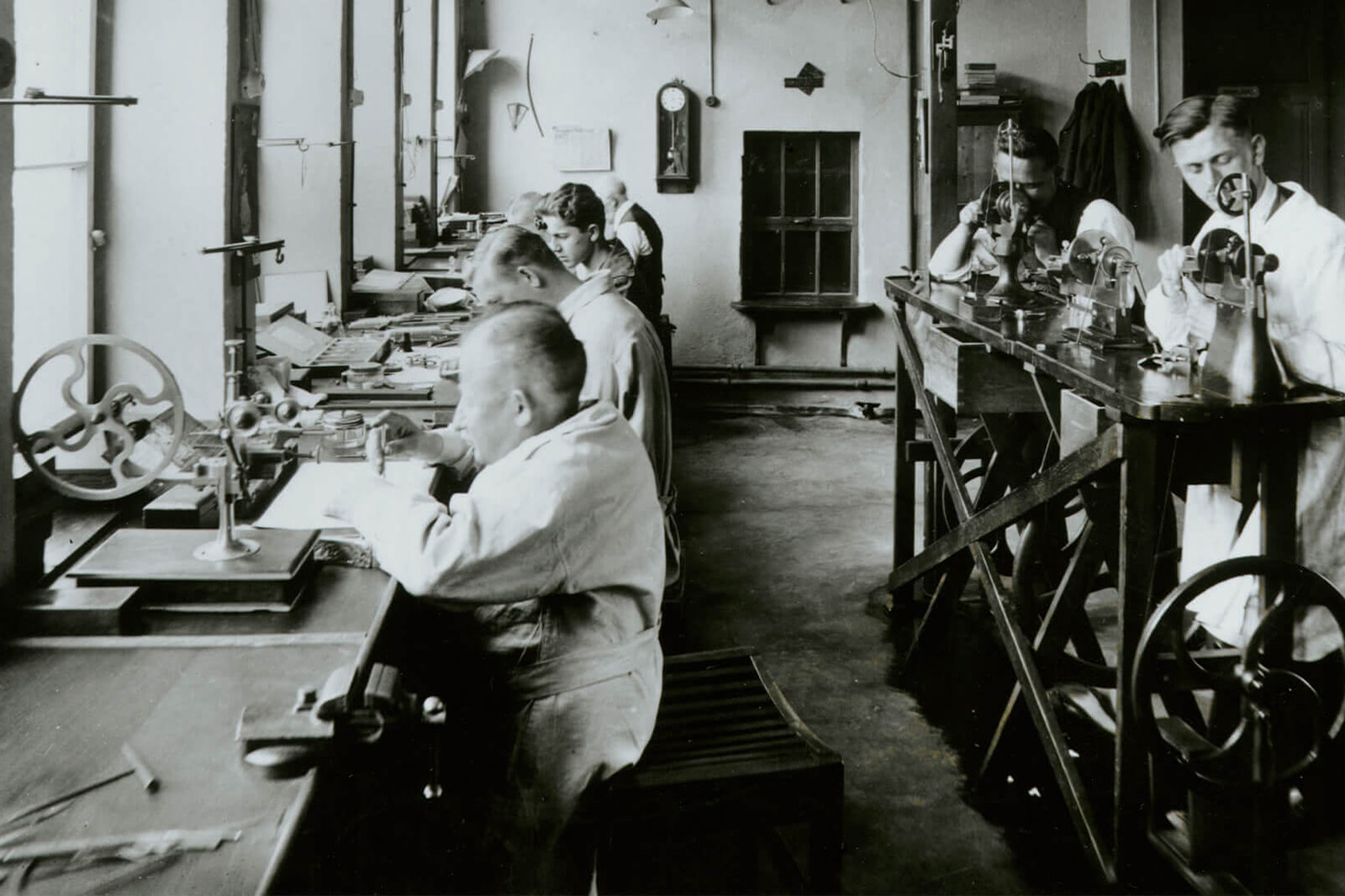 Then came World War II and unsurprisingly these top names in east German watchmaking were commissioned to produce pilots’ watches and deck watches for the Nazi regime. The expertise of these brands was rerouted into the war effort and they were made to produce high precision instruments wherever they were required, not just wristwatches. Fuse devices for explosives, instrument panels for vehicles, these humble watch brands became vital to the war effort. This meant it wasn’t long before the Allies started to bomb the hell out of them. Dresden was famously the site of huge air raids and Glashütte is less than 18 miles to its south.

Lange and Söhne was virtually wiped off the map, as were many other prominent names. However, despite the horrific destruction, the watch industry emerged as a phoenix from the flames, as rather than being appropriated by the USSR, A. Lange & Söhne, Mühle and all remaining watchmakers in East Germany were conglomerated into GUB, meaning the top minds from all these fantastic manufacturers were working together on a single project. 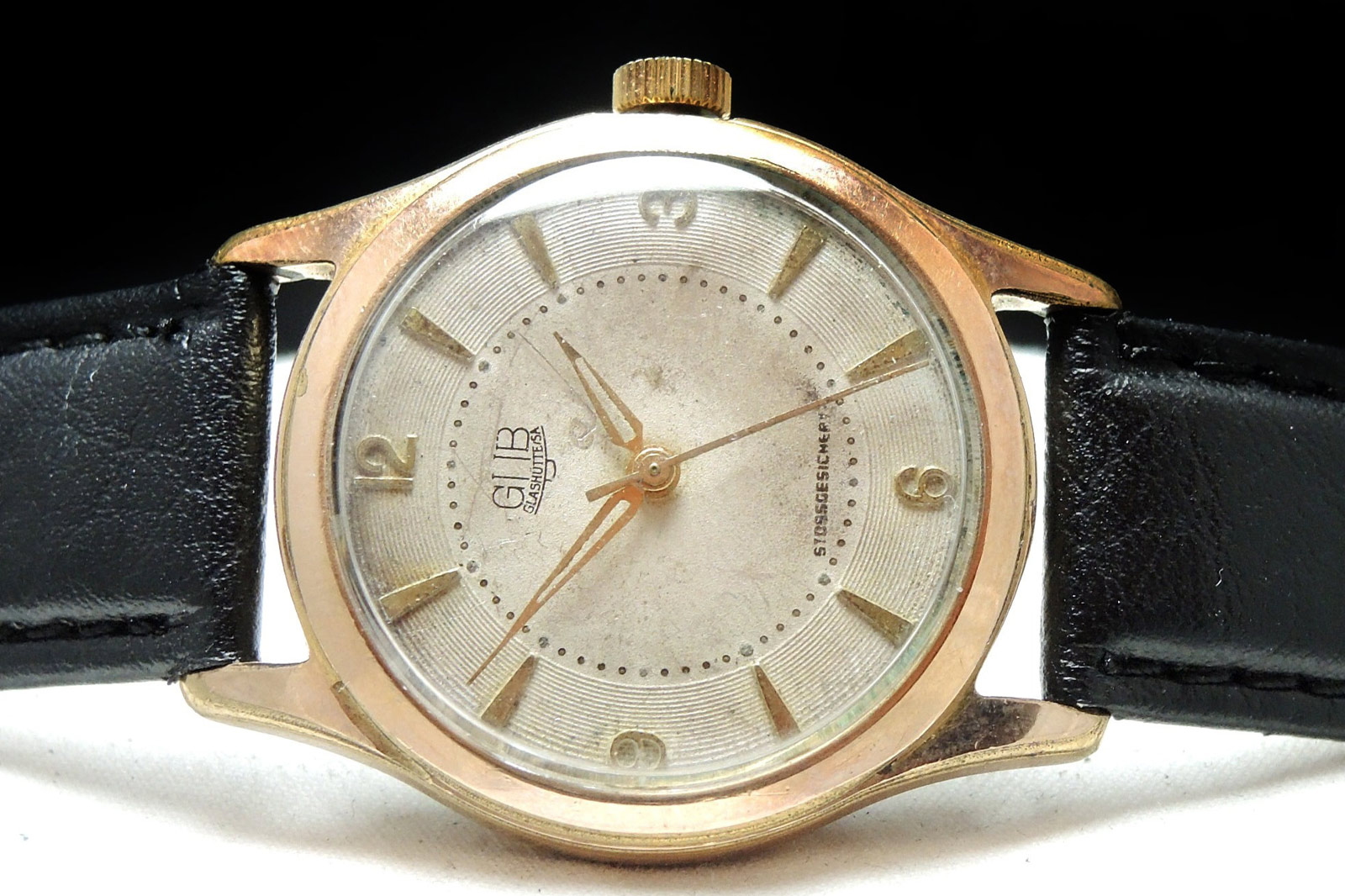 Watches like the GUB Stossgesichert quickly earned a reputation throughout the 1960s. It’s built on the framework of military pilots’ watches produced during the war reimagined for civilian use. The large 43mm diameter case in stainless steel maintains the large proportions required by pilots while the gold colouration makes it more luxurious than mil-spec models.

It’s a similar story on the dial. Wide, uncluttered and instantly legible but with more shapely hour markers than conventional Fliegers. It’s a potent recipe made all the stronger by the movement inside, the GUB Calibre 60.1. It’s a manual wind piece running at a frequency of 18,000vph with sweep seconds and a 42-hour power reserve. What makes it particularly celebrated is its accuracy, featuring a daily average within six seconds of deviation, something that is absolutely necessary for coordinating military air strikes. 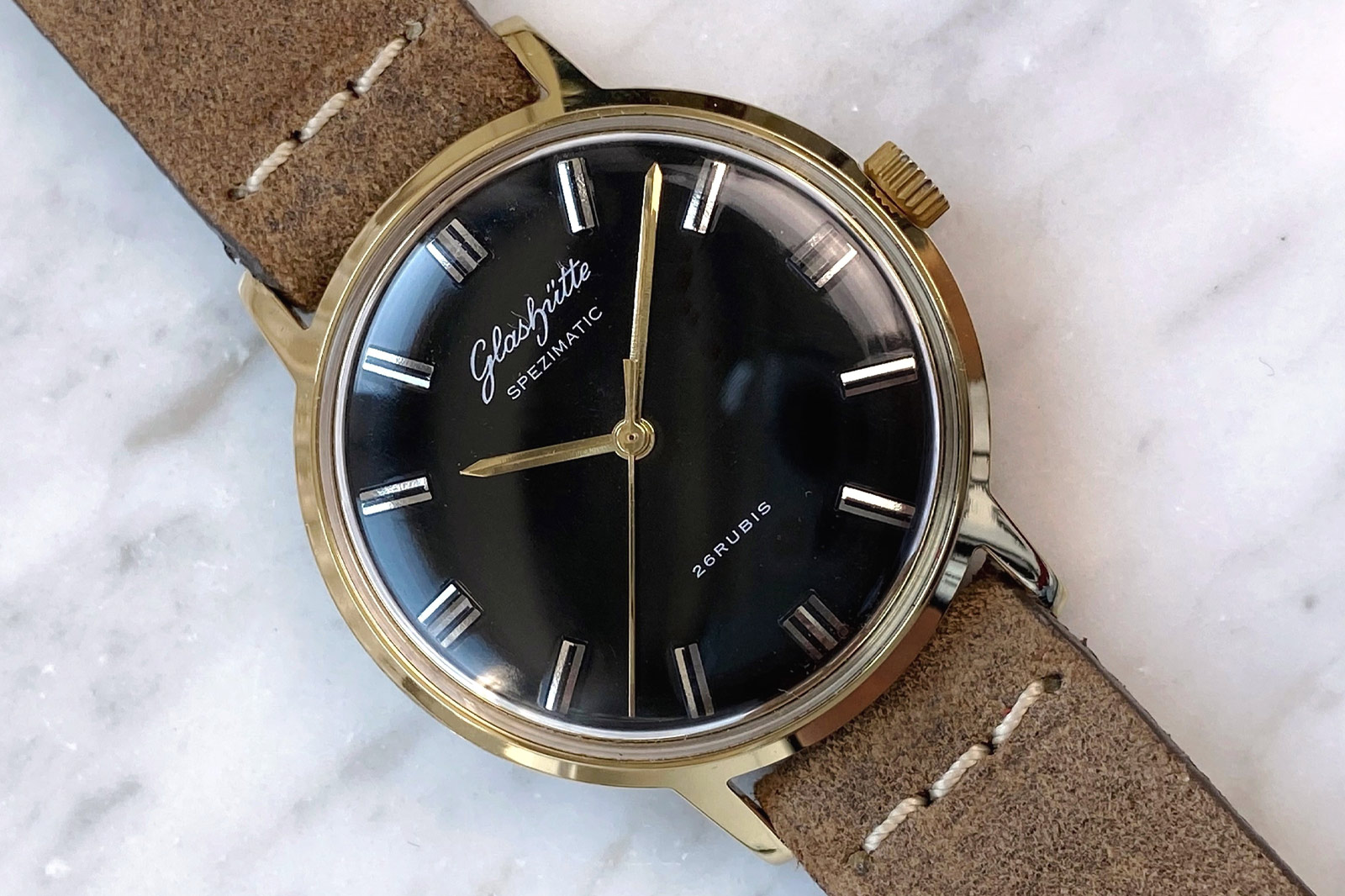 It wasn’t all pilots’ watches though as GUB built a reputation for their aquatic watches in the form of marine chronometers and diving watches. The GUB Spezimatic from the 1970s is a 44mm dreadnaught of a watch with a chunky bezel and chunkier lugs. It’s more in line with the type of bold, uncompromising design expected from the nationalised companies, think Vostok and the like. Crazy and insane but utterly characterful, which is why over 3.7 million were built. Plus, at its heart is another GUB movement, the Calibre 75 – GUB were also known to use some Swiss movements.

GUB’s watchmaking time was limited though as in 1990 Germany underwent reunification and all the Soviet era institutions were slowly dismantled. For a time, it became Glashütter Uhrenbetreib GmbH before it was fully privatized in 1994. In the following years, the various conglomerated brands re-emerged as independent names once more with the rebirth of A. Lange & Söhne, Mühle-Glashütte, and more. 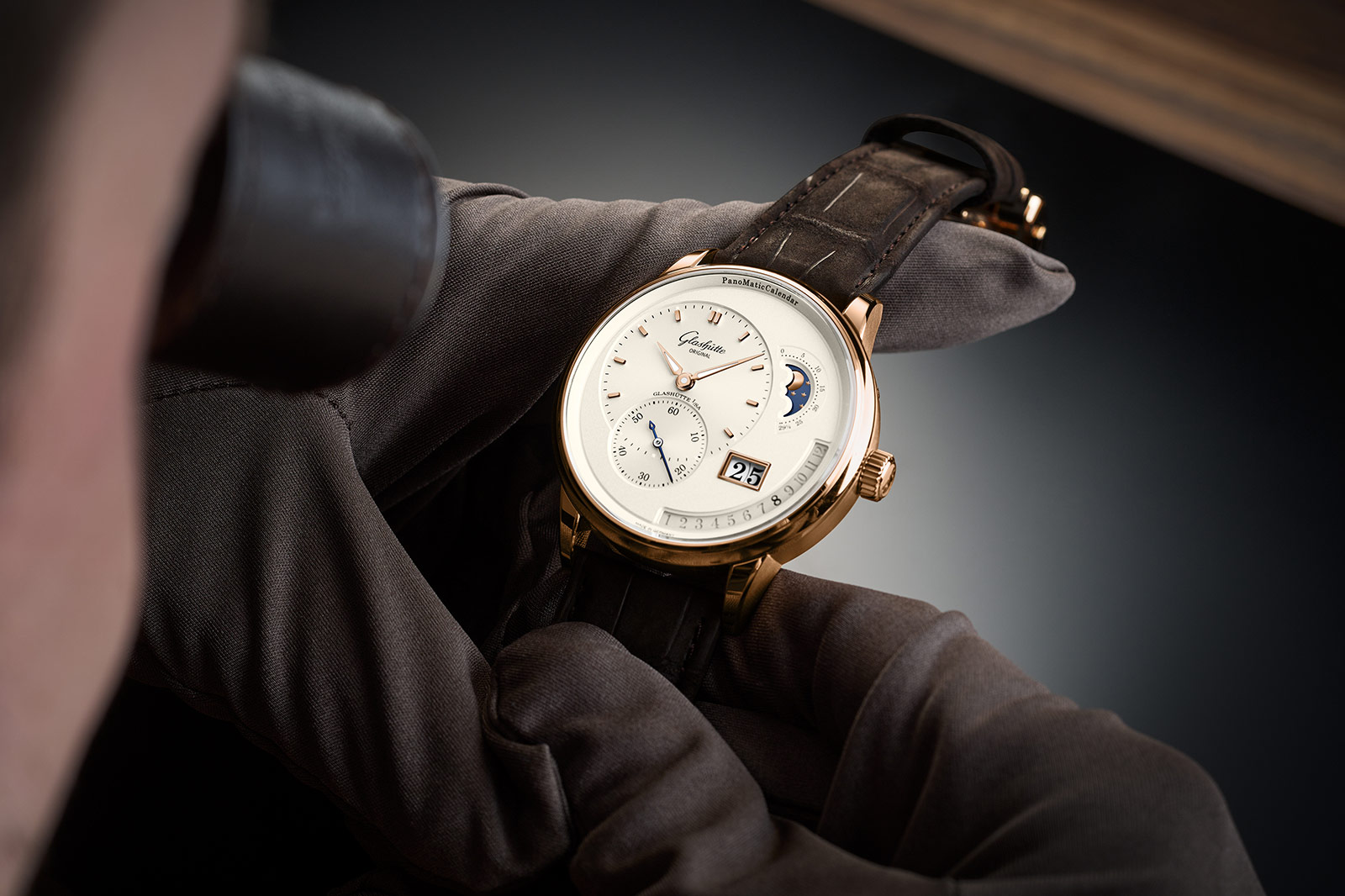 As for the remnants of GUB itself, including their back catalogue of watches, they became the basis for a new east German watch brand – one you’ll be familiar with – Glashütte Original. To this day the Glashütte Original logo pays homage to that of GUB and while a mega- project on the scale of GUB may never be on the horological cards again, it’s cool that the legacy of such a company is still influencing horology.

If you found this article interesting check out our previous article on The Best German Watch Brands You Need to Know.