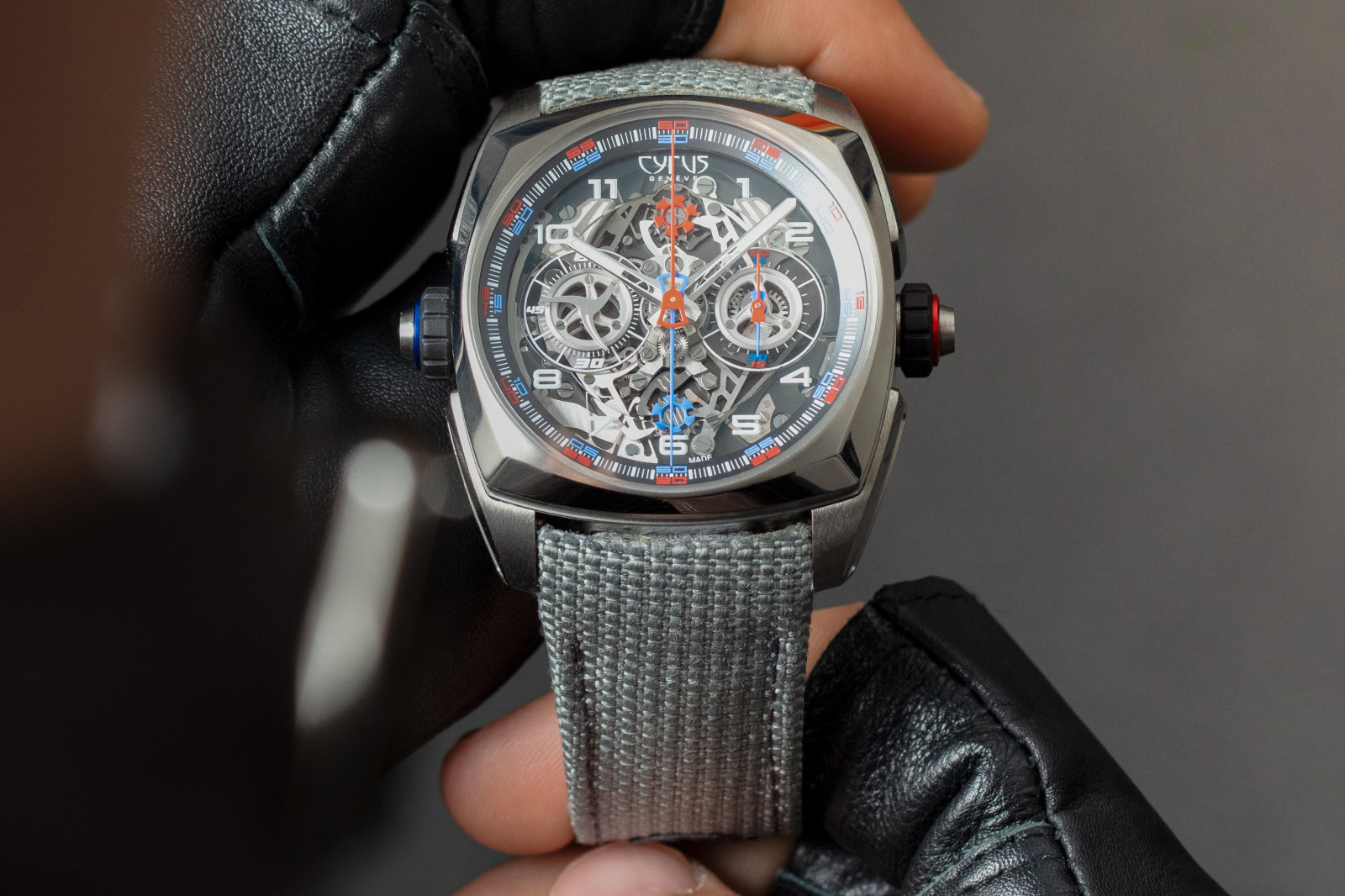 The humble chronograph is one of watchmaking’s most iconic complications, available at every price bracket imaginable with styles and variations to match. At one end of the spectrum there’s Omologato’s simple £370 Fiorano and at the heights of haute horology there’s the Vacheron Constantin Traditionnelle Split-Seconds Ultra-Thin Excellence Platin.

However, on that incredibly broad spectrum there are few, if any, watches that are directly comparable to Cyrus’ new Klepcys model, which houses the rare complication that gives the watch its name: Double Independent Chronograph Evolution, or the eminently catchier DICE. 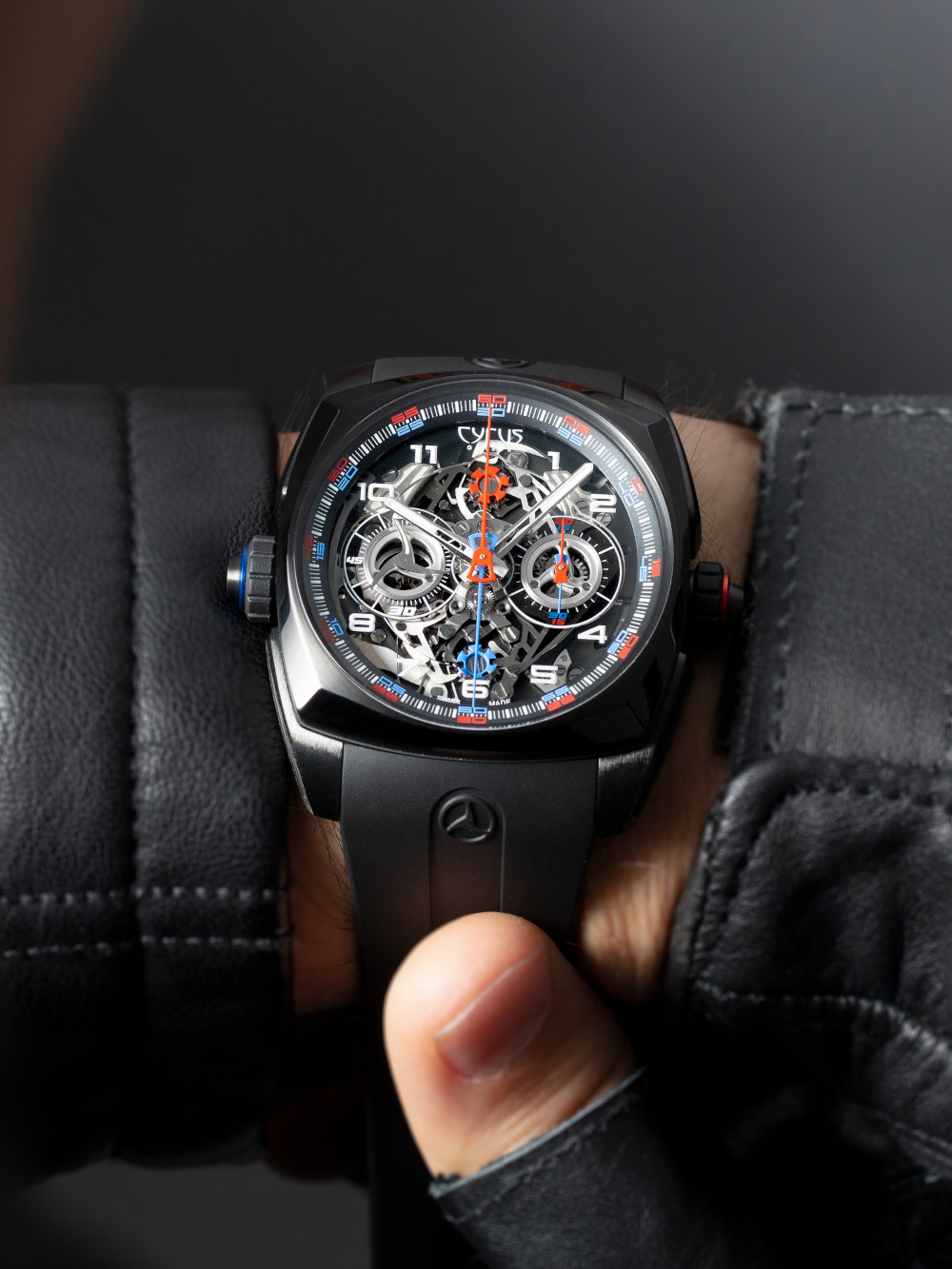 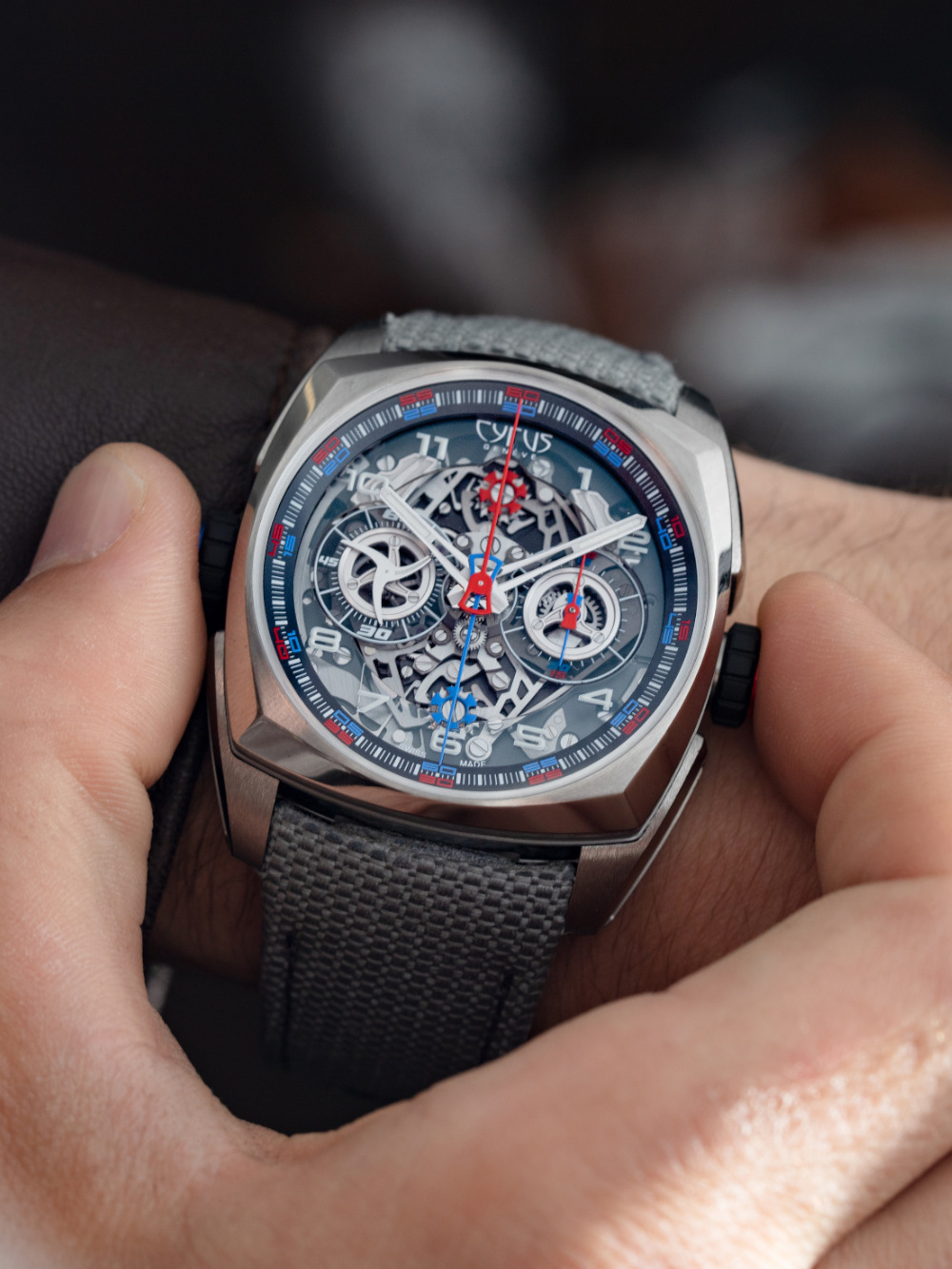 Obviously, that complication is the meat of this watch so let’s not beat around the bush. The easiest way to describe it is as a variation on the rattrapante or split-seconds function which allows you to start two chronograph hands simultaneously and stop them at separate intervals, making it capable of timing two events, such as a single lap in a longer race.

Where a double independent chronograph differs is that the two chronograph hands aren’t slaved to each other and can be stopped and started totally at will. This means on top of timing lap by lap, it can measure the time it takes for two separate racers to cross the finish line.

To keep things simple, each hand is colour coded red or blue, corresponding to which of the twin monopusher crowns operates it. The 30-minute timer at 3 o’clock follows the same system for its double hands, counterbalanced on the other side of the dial by a small seconds subdial. 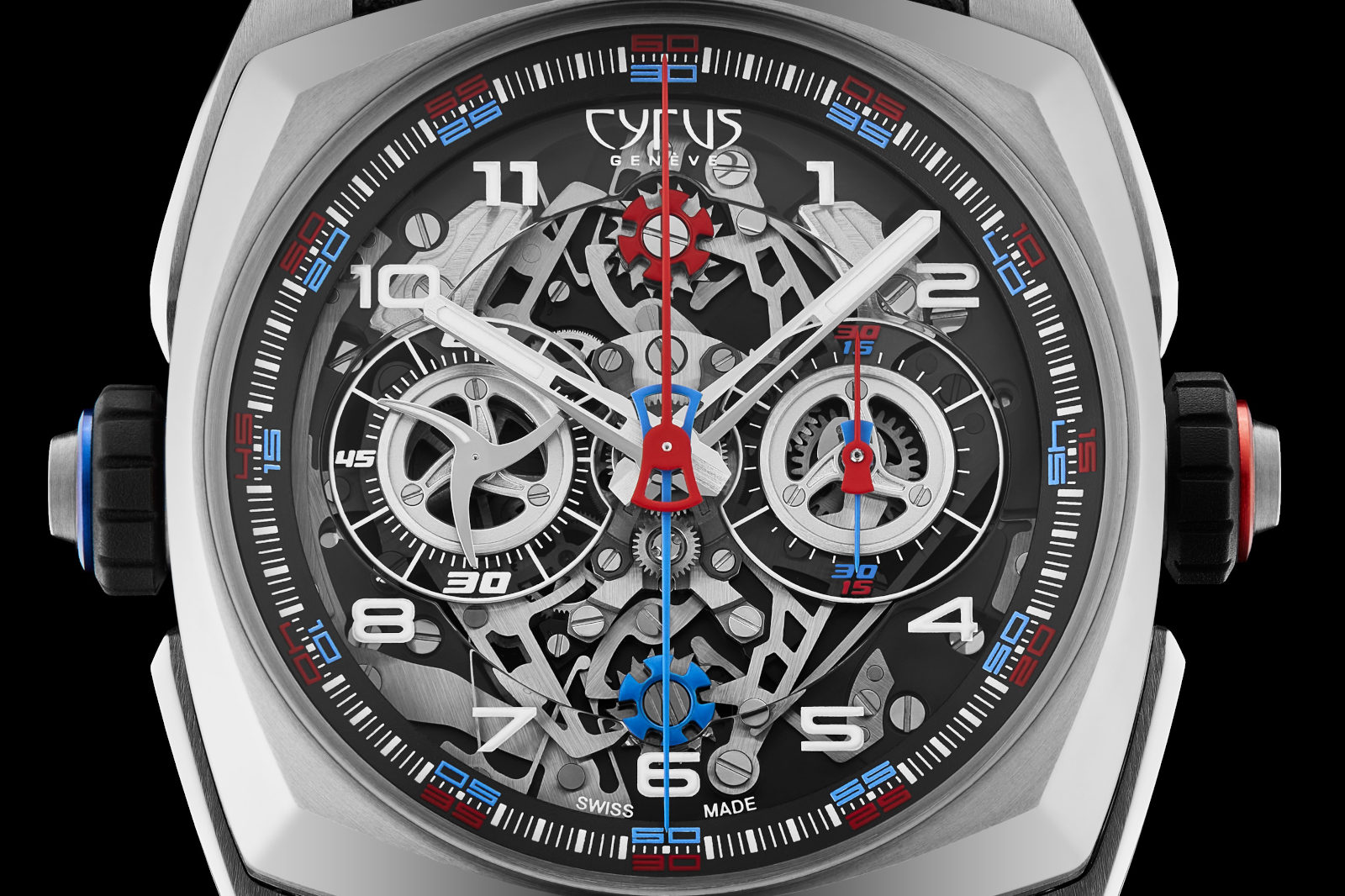 The open worked dial itself shows off the mechanisms operating below and while it does struggle with legibility like most skeleton style watches, the bright blue and red colours do go some way to alleviating that. They’ve also picked out key components like the double column wheels in corresponding colours to highlight them. Additionally, the arrangement of components provides a better dial side view of the chronograph mechanism than most skeletons.

All that chronographic goodness is contained within the Klepcys’ signature cushion case, measuring 42mm in diameter. It’s available in polished titanium or with a black DLC coating, which really makes the red and blue of the hands pop. And of course, both sides are adorned with one of the twin monopusher crowns. 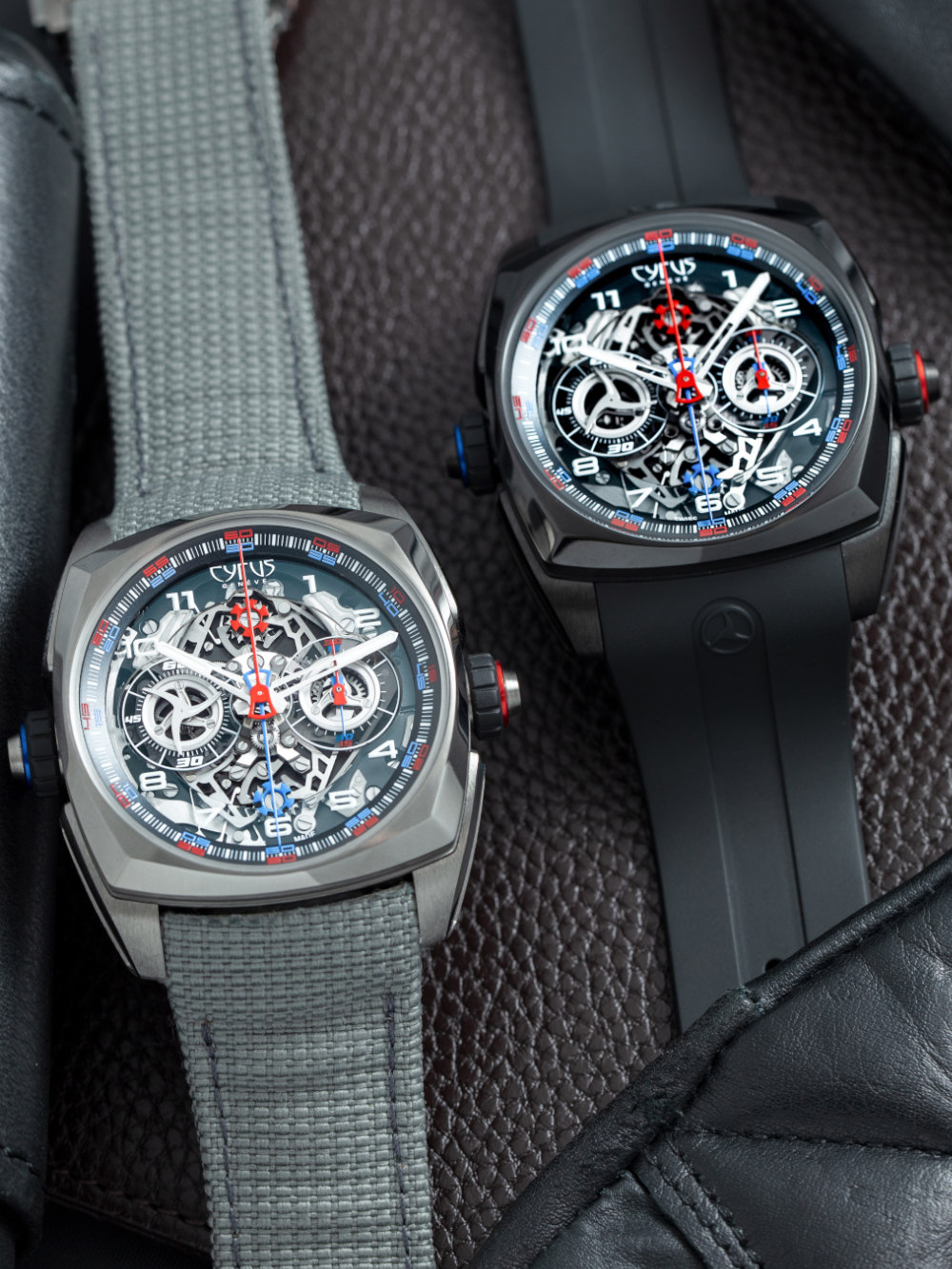 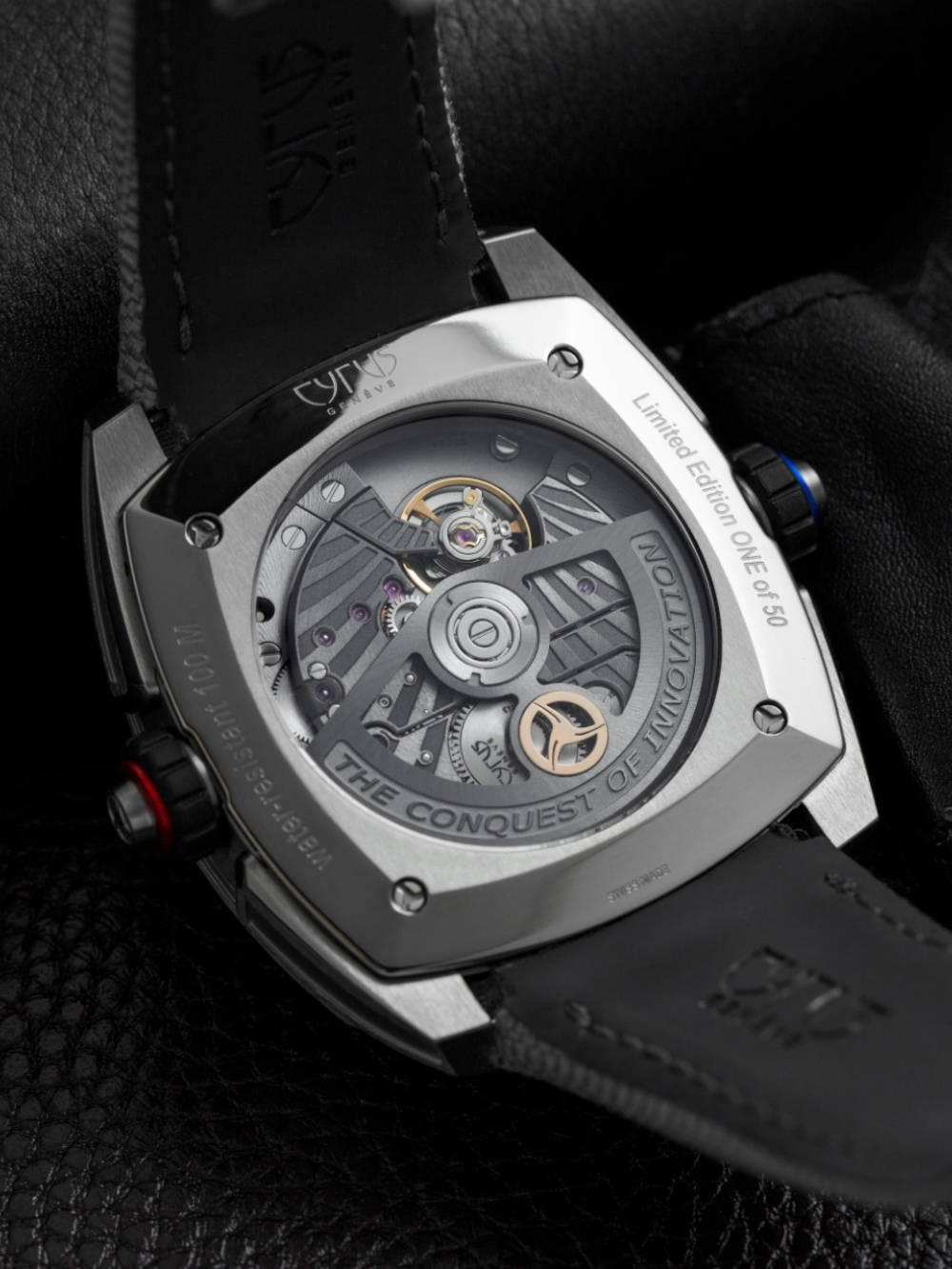 The calibre, which is so prominently displayed, is the CYR718. It’s made from 443 components with almost half of those being dedicated to the chronograph module alone. And as it’s on display there’s your usual assortment of classic high end finishes such as snailing, microblasted PVD, rhodium plating and sunray finishing.

With only 50 of each case variant available and given the complexity and rarity of the function (it has seldom been seen since 1873), it’ll be no surprise that you’ll have to enquire if you want the price.