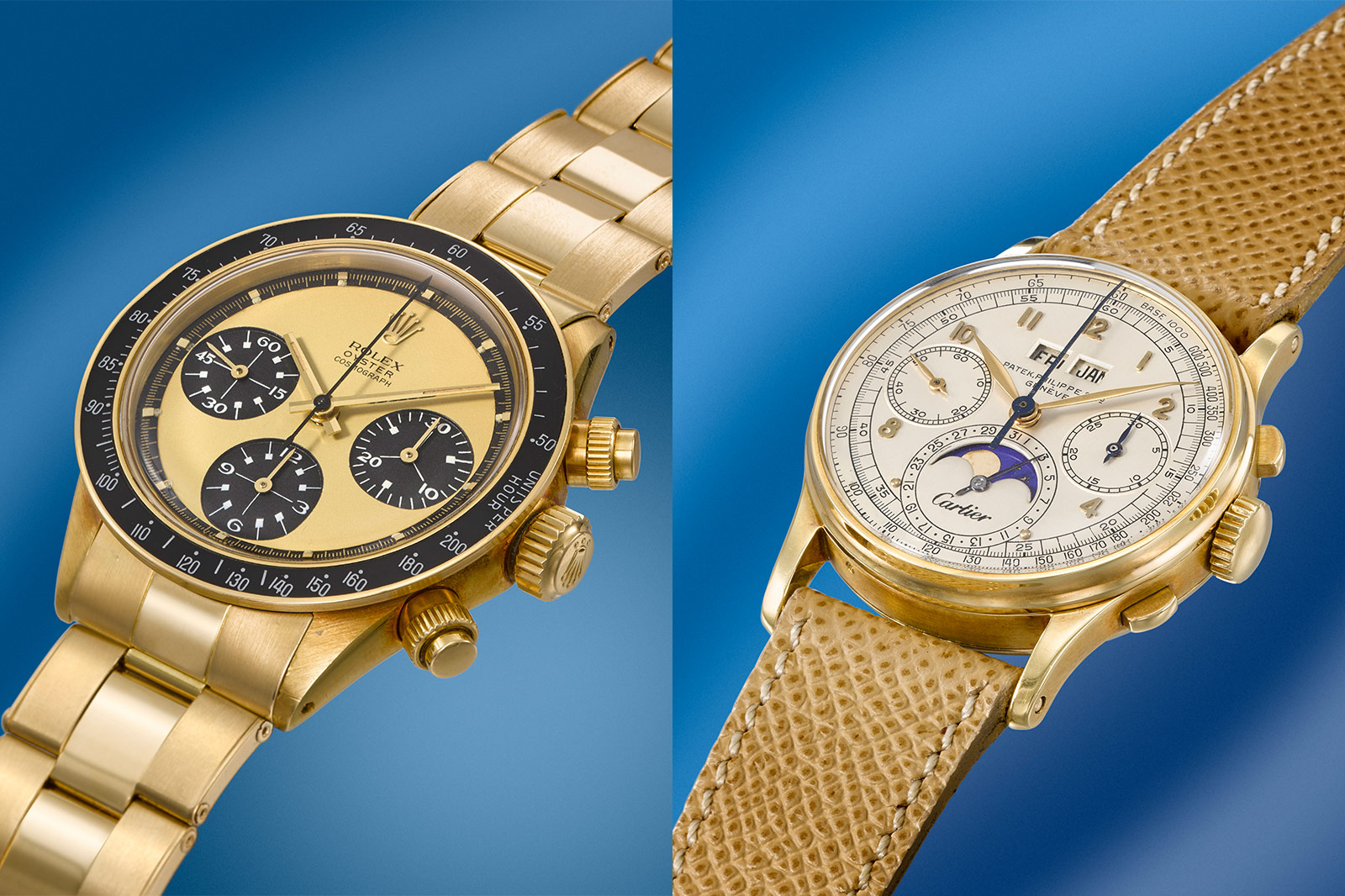 Next month, Christie’s are set to hold their Rare Watches Geneva Auction and if these highlights are anything to go by, “Rare” is an understatement. An 18k Paul Newman, the first ever series-produced perpetual calendar chronograph and a watch that has summited Everest are just a taste. 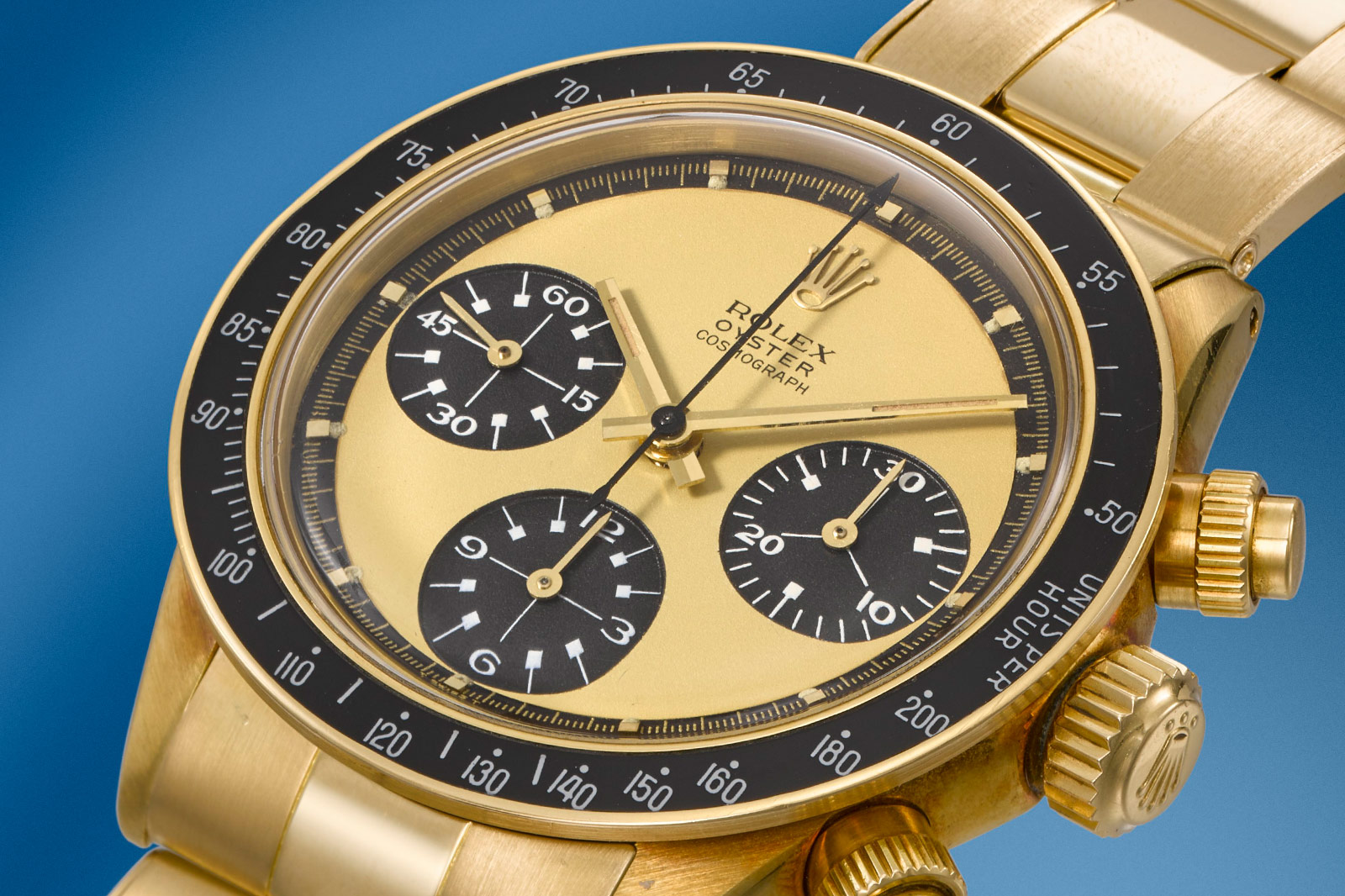 The first of the Christie’s Rare Watch Auction highlights is a true legend in watch collecting circles, aptly nicknamed ‘The Legend’. It’s one of only three known Rolex ‘Paul Newman’ Daytonas in 18k yellow gold, making it one of the rarest editions of an uber-collectible watch. It is quite literally the rarest of the rare.

What makes it special is the bright yellow dial (known as Lemon) with black subdials featuring white indexes and numerals. The majority of early gold Daytonas have matching gold or gold on black subdials, making the stark contrast of the white and black present on The Legend truly noteworthy. 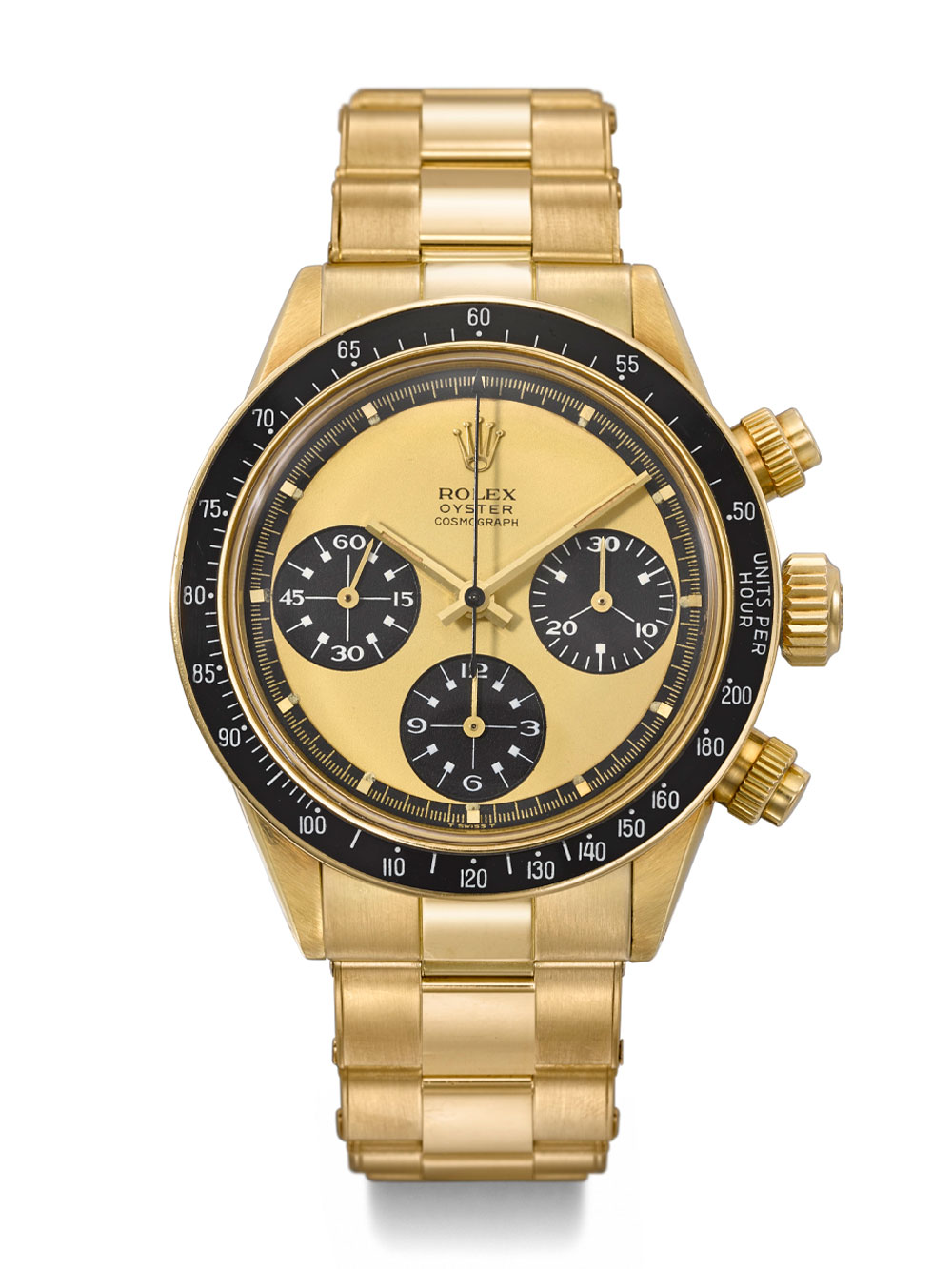 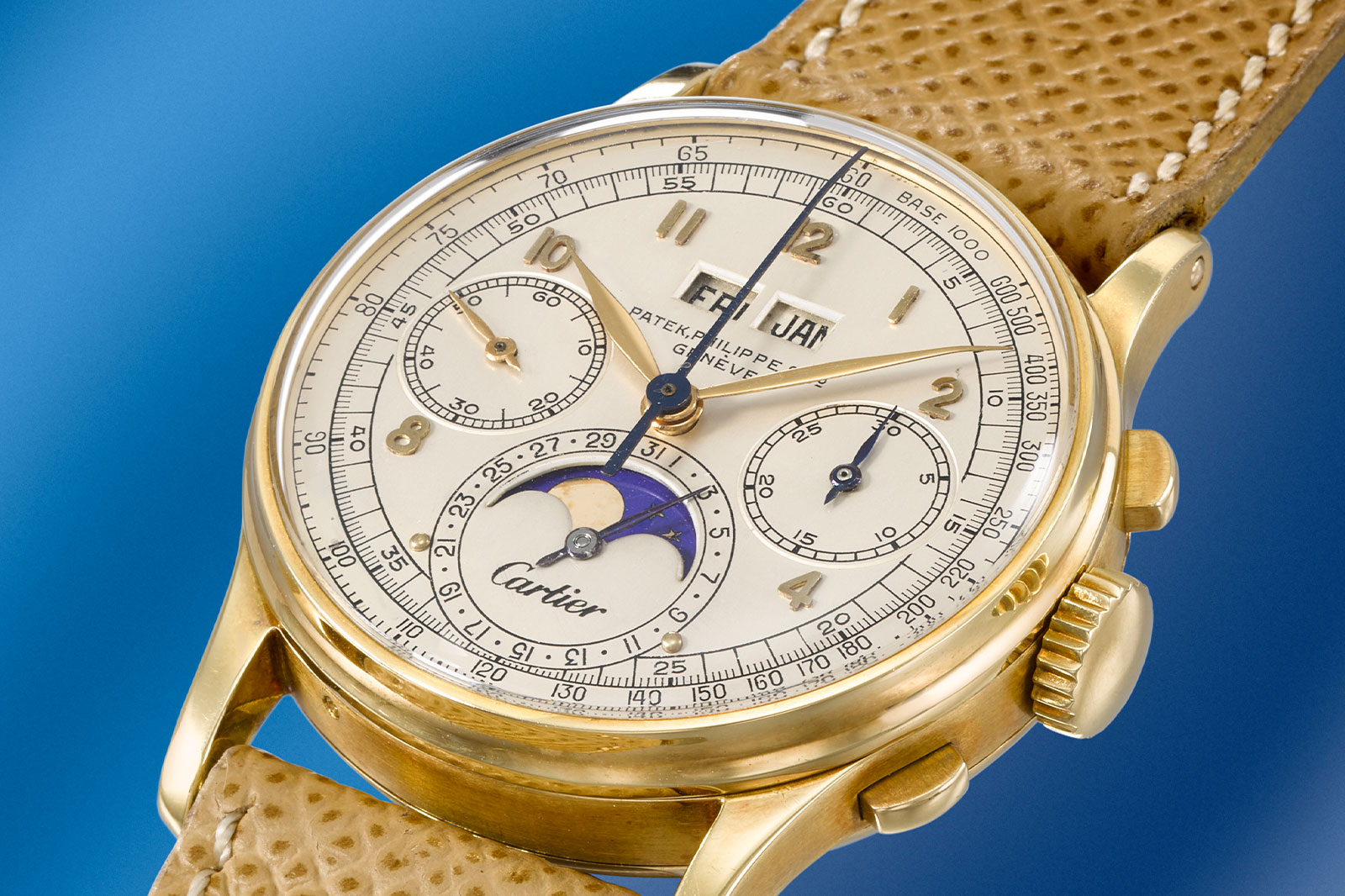 Patek Philippe are no strangers to collaborating with high end jewellers and their most recent headliner was last year’s Tiffany Nautilus. Back in 1944 it was Cartier that Patek Philippe worked with, producing a Ref. 1518 Perpetual Calendar Chronograph that was double-signed and certified by Cartier. It is believed that this model is a piece unique.

The sale of a Ref. 1518 is spectacular enough as the weight of provenance is almost overwhelming even without the double-signed dial. The 1518 was the first series-produced Perpetual Calendar Chronograph in history, cementing Patek’s position as the master of grand complications. 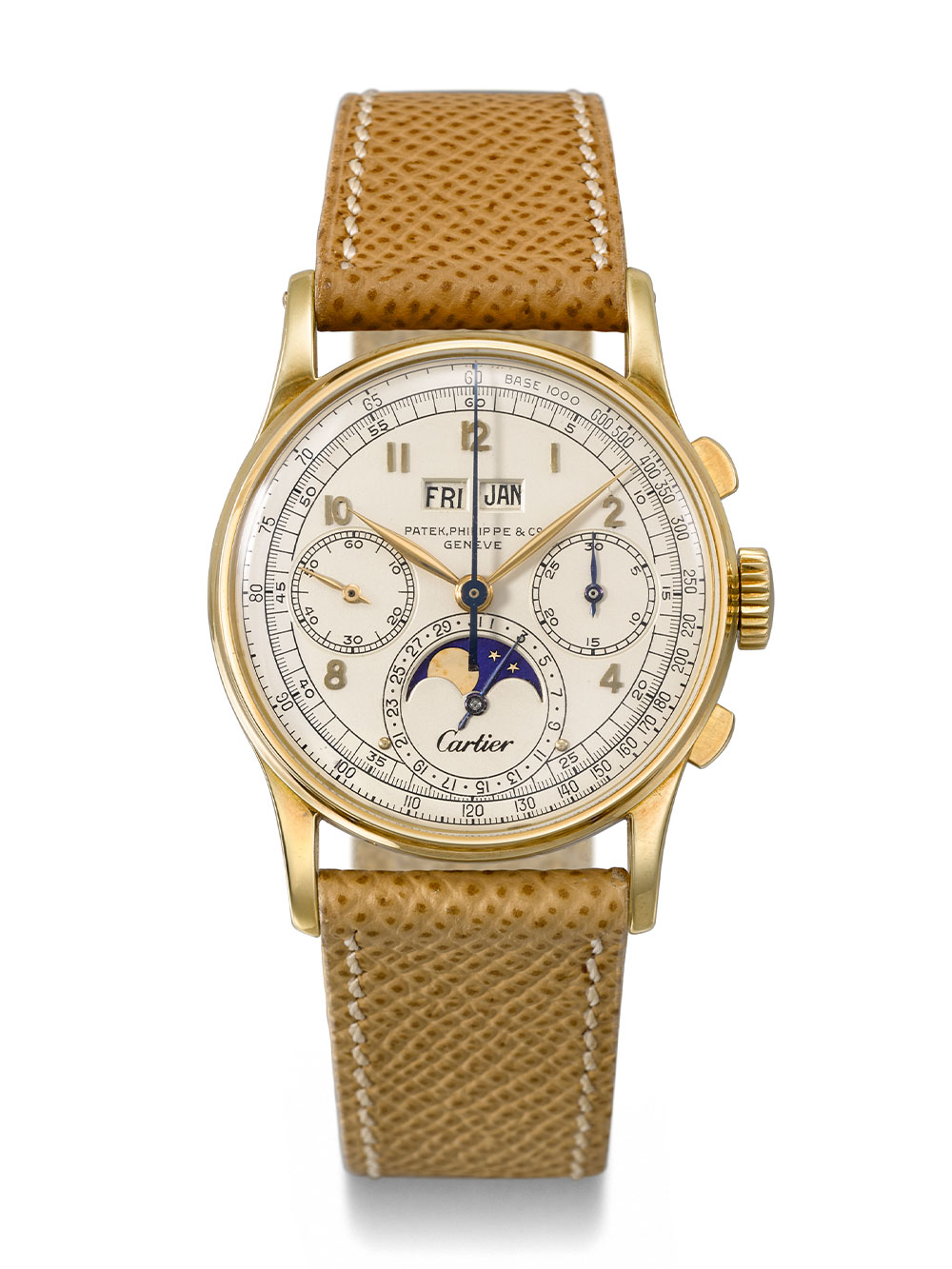 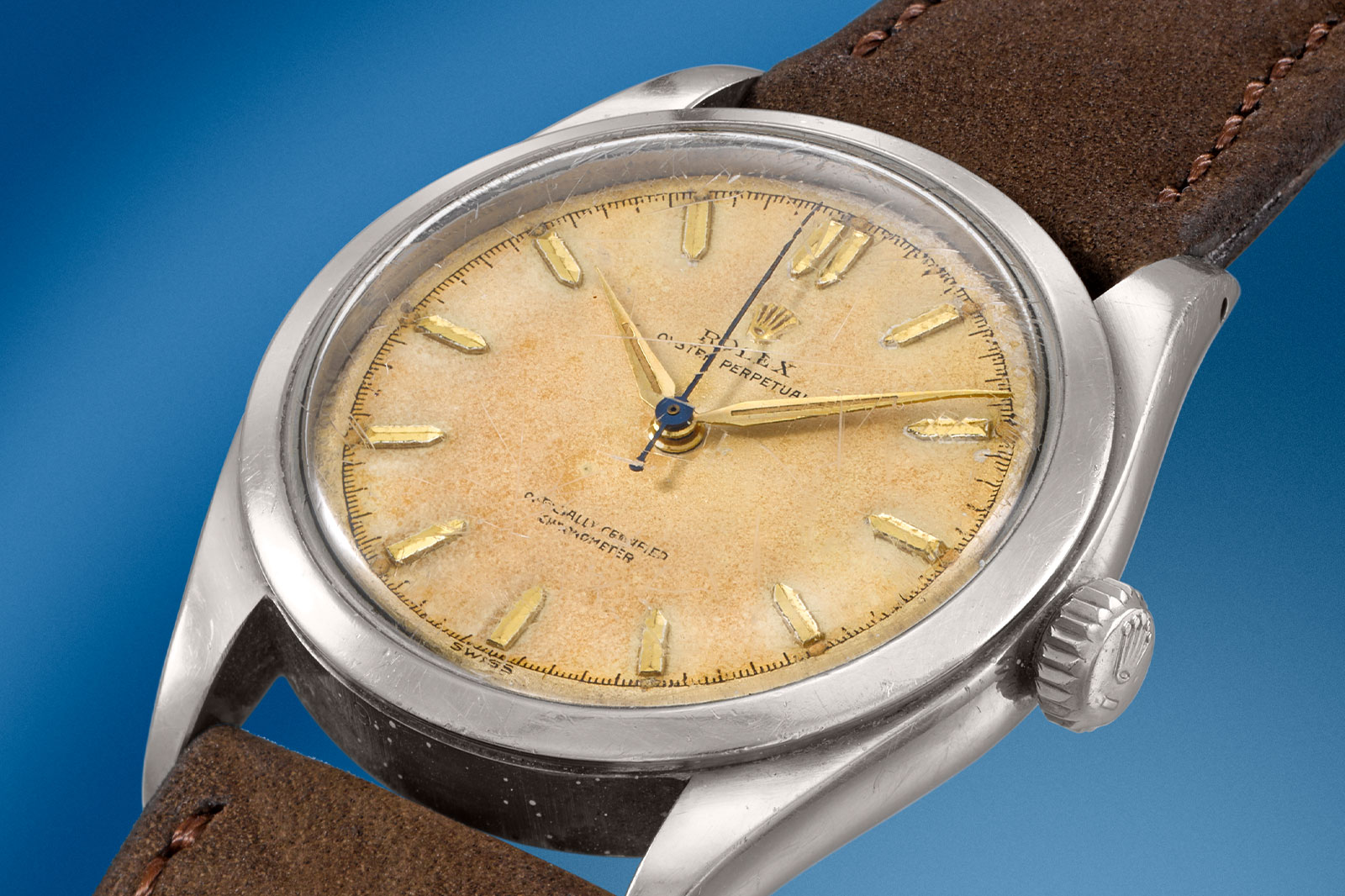 The highly worn dial of this Ref. 6298 ‘Pre-Explorer’ reflects the fabulous adventures it has been on. It was gifted to the Swiss explorer Jürg Marmet and bears the engraving “Baffinland 1953 Jürg Marmet” on its caseback in honour of an expedition to Baffin Island. However, Marmet embarked on his most famous adventure in 1956, attempting to conquer Mt. Everest. The ascent and descent alone took 40-days and included summiting Lhotse, the world’s fourth tallest mountain, for the first time in history on the way. When Marmet stood at Everest’s peak, he was the third human to ever have done so.

On his wrist the entire time was his Rolex Ref. 6298, making it one of the most significant adventure watches of all time. It has witnessed multiple historic landmarks and survived to tell the tale, wearing its scratches and abrasions proudly.

In any limited production run certain pieces become more desirable than others. Perhaps it’s the best preserved example or bears a unique deviation that makes it special. Or, quite simply, it could be No.1. From 1977 to 1985 Audemars Piguet produced 951 Ref. 5402SA and this Christie’s Rare Watch Auction highlight is indeed the very first one, dating to 1977.

The Ref. 5402SA is itself a landmark watch in the Royal Oak’s history as it was released at a time when steel and gold bicolour was a new and controversial design. However, just a few years later, in the early 80s, bicolour was at the pinnacle of sports luxe trend. Another example of AP being ahead of the curve.

The Cartier Crash is an instantly recognisable design that has become genuinely iconic, so much so in fact that it features in our guide to the 8 most iconic watch designs. This example dates to 1991, which makes it part of the Paris limited edition run. This specific piece has only had a single owner, virtually guaranteeing that it has been kept in pristine condition with the utmost respect for almost 30 years.

While it might not be as desirable as an early 1960s Crash, it’s still exceptionally rare, especially in such perfect condition. So, while it might not reach a record breaking price like the 1960s edition that was sold for $1.5 million earlier this year, it still has a solid auction estimate of CHF 120,000 – 180,000 (approx. £106,000 – £160,000). Plus, considering how wildly inaccurate most estimates are, all the watches here are likely to reach some astonishing prices before the hammer drops.