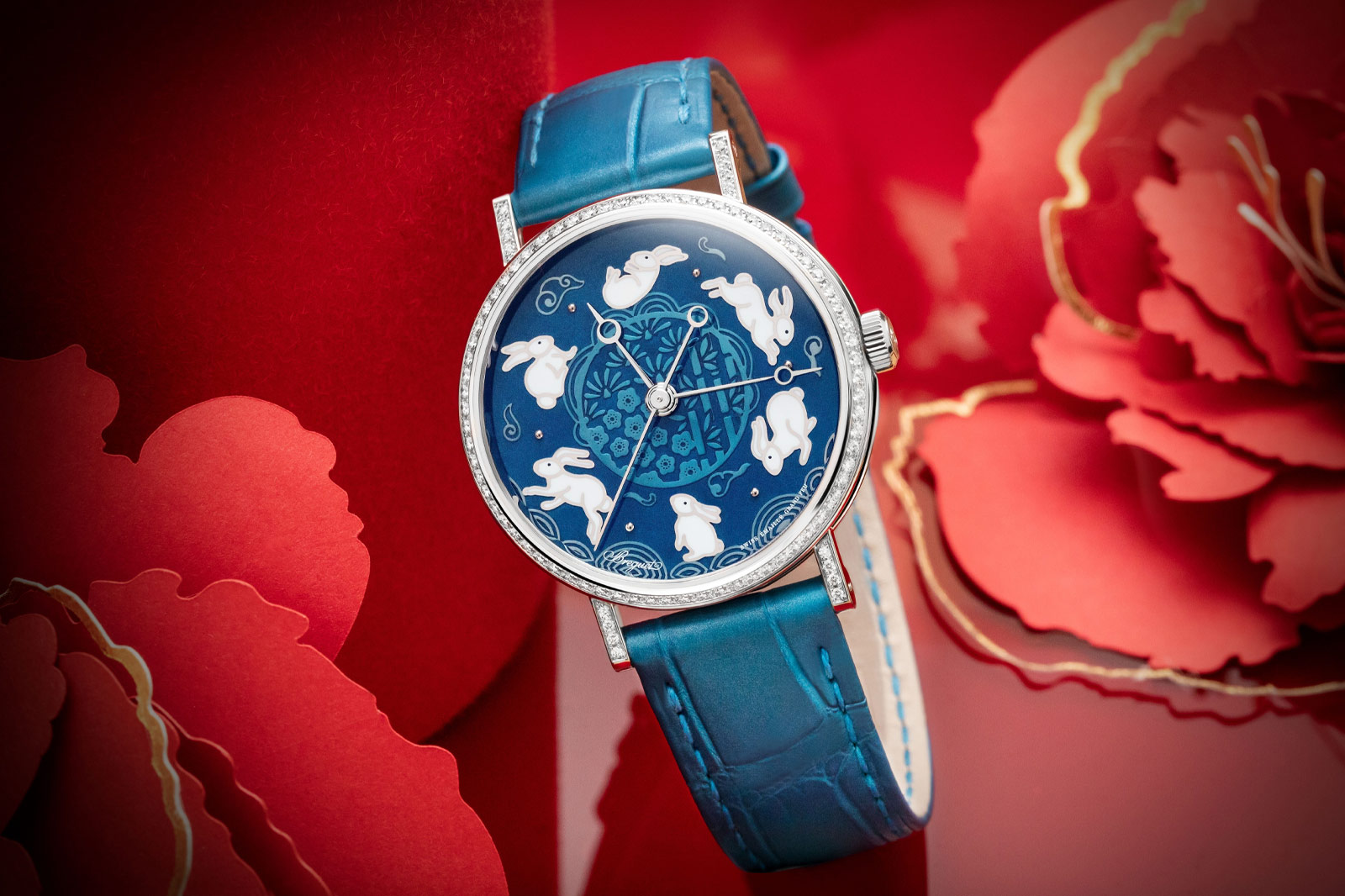 The Lunar New Year begins on January 22nd, heralding the year of the Rabbit in the Chinese zodiac, following on from last year’s Year of the Tiger. According to symbolism behind the zodiac, it’s a good year for positivity and being sociable, which sounds good to me after the last few years. As always at this time of year, a wide variety of watchmakers have launched celebratory wristwatches. Here’s a look at the best Year of the Rabbit watches for Chinese New Year 2023. 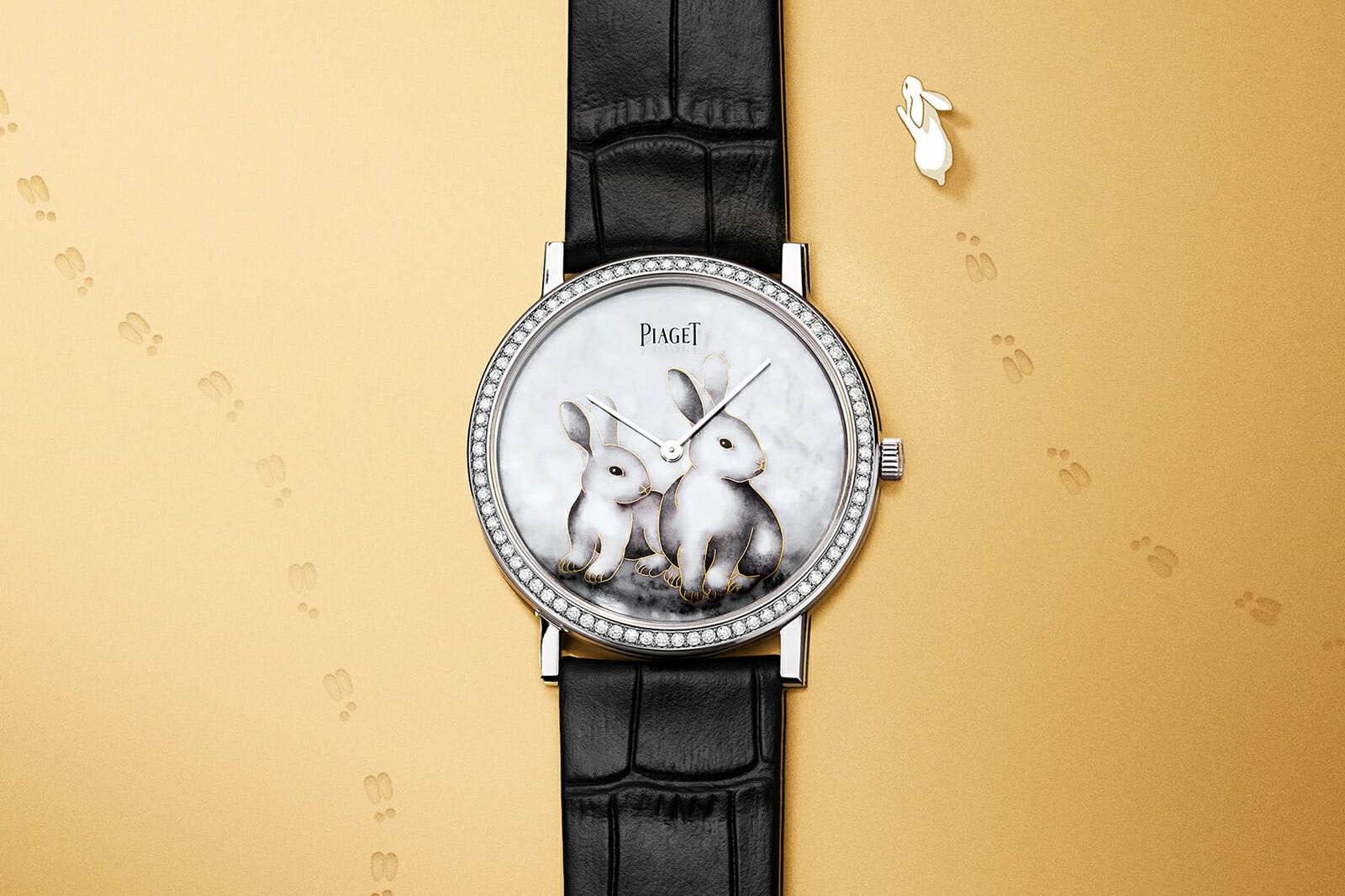 Piaget’s celebration of the Chinese New Year takes the form of a gorgeous Altiplano with a Grand Feu cloisonné enamel dial watch. Cloisonné is an enamelling technique that involves the use of thin gold wire to depict specific patterns and images, here it creates the outlines of a pair of rabbits. The marble-esque dial is surrounded by 78 brilliant-cut diamonds set into the bezel of the 38mm white gold case. Limited to 38 pieces. 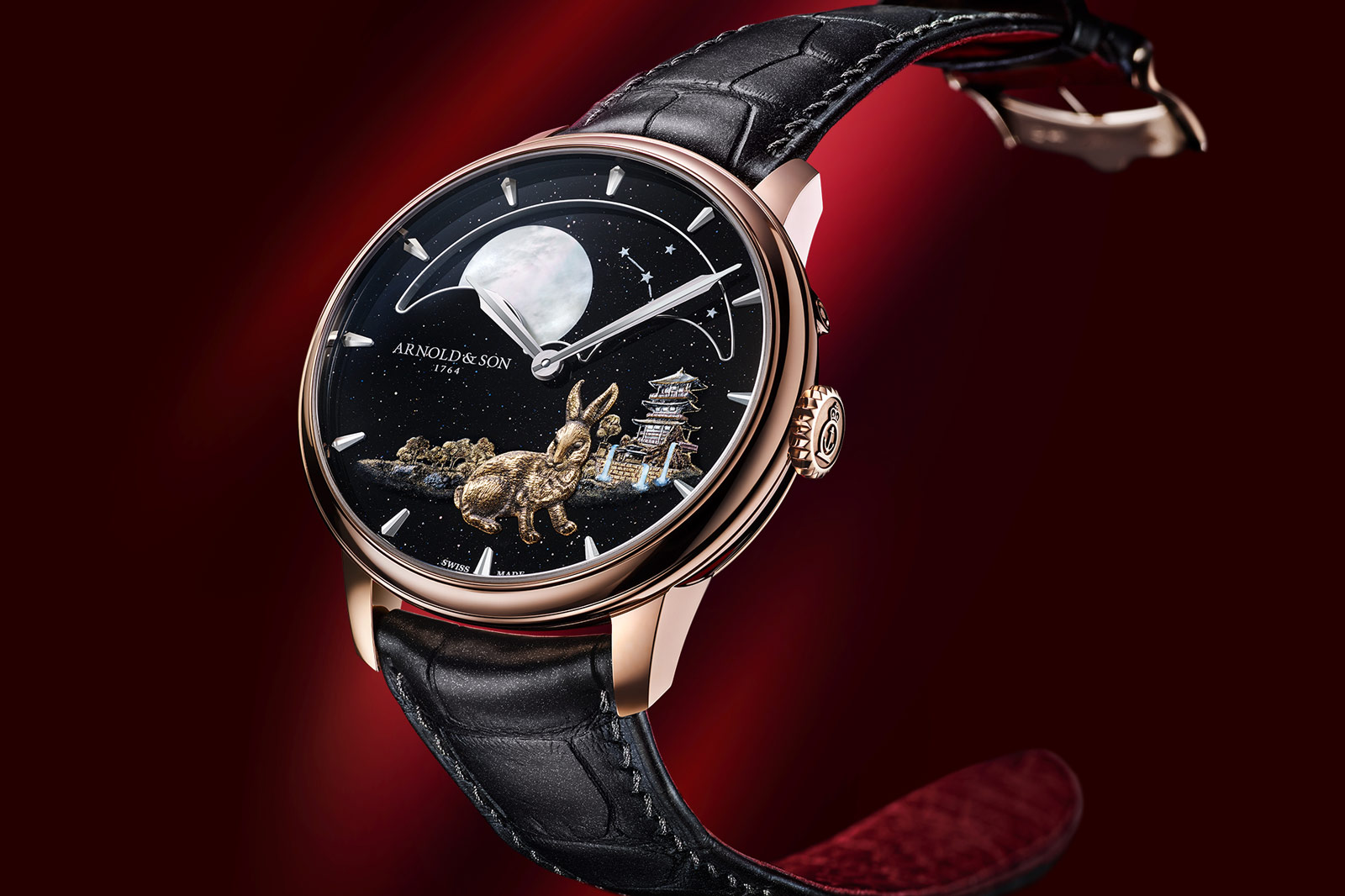 Another watchmaker who releases a watch to coincide with the new Lunar year each year is Arnold & Son, with the latest take on their Perpetual Moon timepiece. For 2023 it features an engraved rabbit sitting in front of an intricately detailed pagoda. The enormous moon hangs in the sky, a serene presence in the scene. The watch is 41.5mm in diameter with a rose gold case, housing the A&S1512 calibre. Limited to 8 pieces. 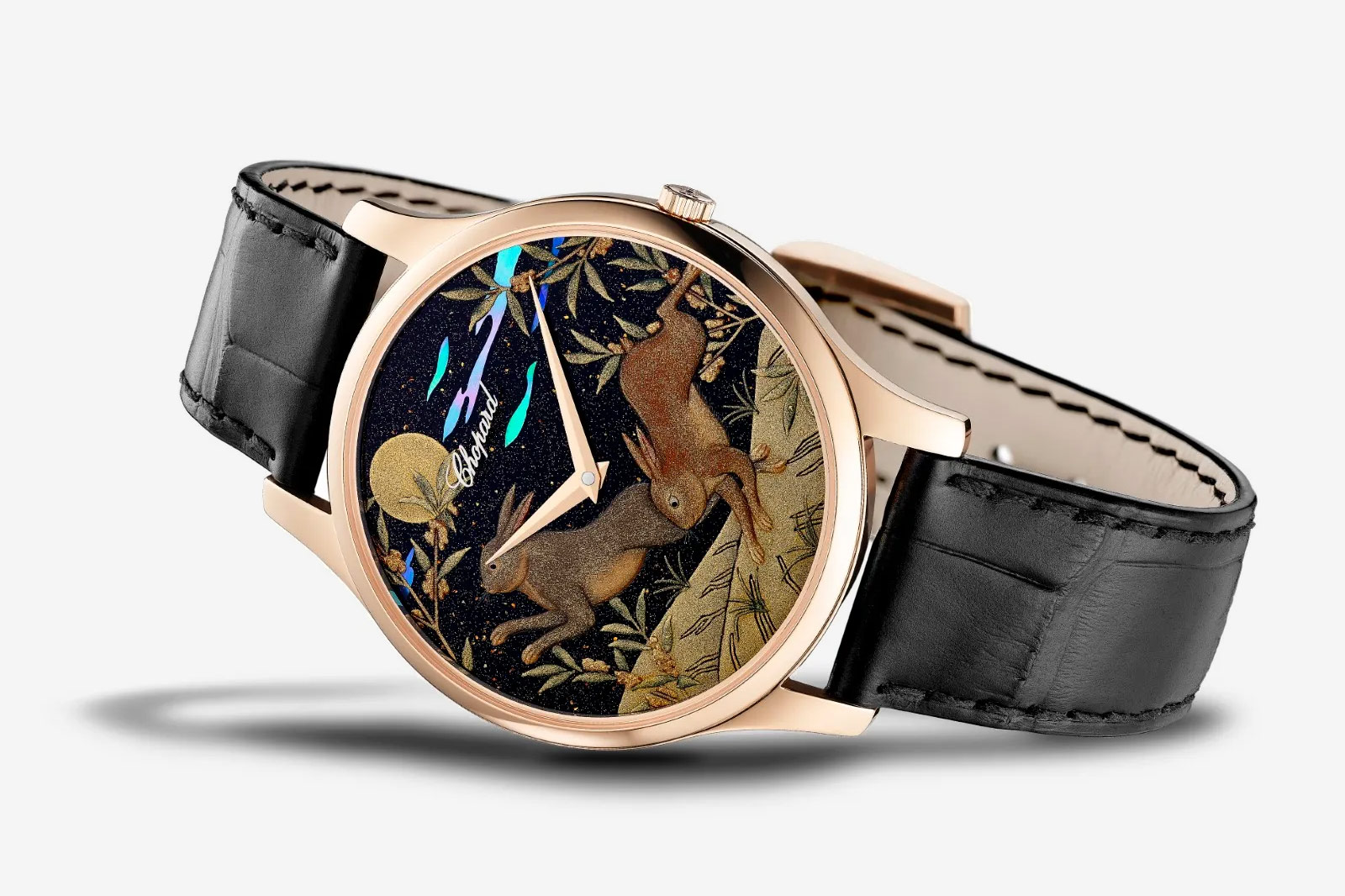 Chopard are another of the usual suspects who produce an annual Chinese New Year watch in the form of the L.U.C XP Urushi. The Year of the Rabbit edition uses traditional lacquer techniques to depict the year’s animal against a dark night sky. For this Lunar Year, two rabbits leap across the dial beneath the moon. However, the most intriguing element of the design is the wisp of clouds in the sky, which appear almost iridescent in pastels. Limited to 88 pieces. 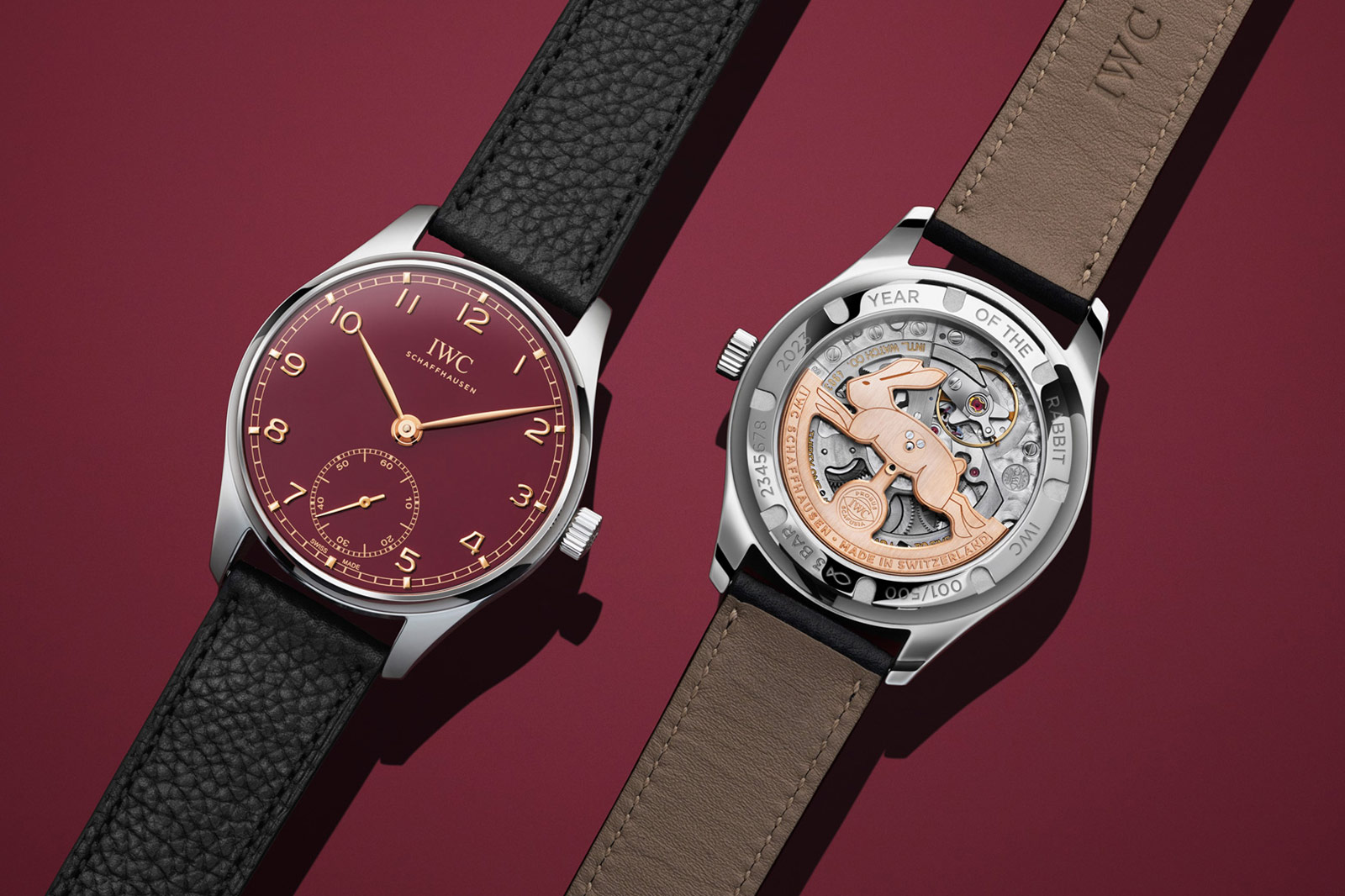 IWC have introduced a limited edition Portugieser for Chinese New Year, featuring a 40mm diameter stainless steel case and a rich burgundy dial. The colour red has huge significance in Chinese culture, representing prosperity, luck and joy, making it a popular choice among watchmakers. Here, it’s presented in a darker shade than is typical, but it plays well alongside the rose gold markings and rabbit shaped rotor. Limited to 500 pieces.

Vacheron Constantin Métiers d’Art The legend of the Chinese Zodiac Year of the Rabbit, from £102,000 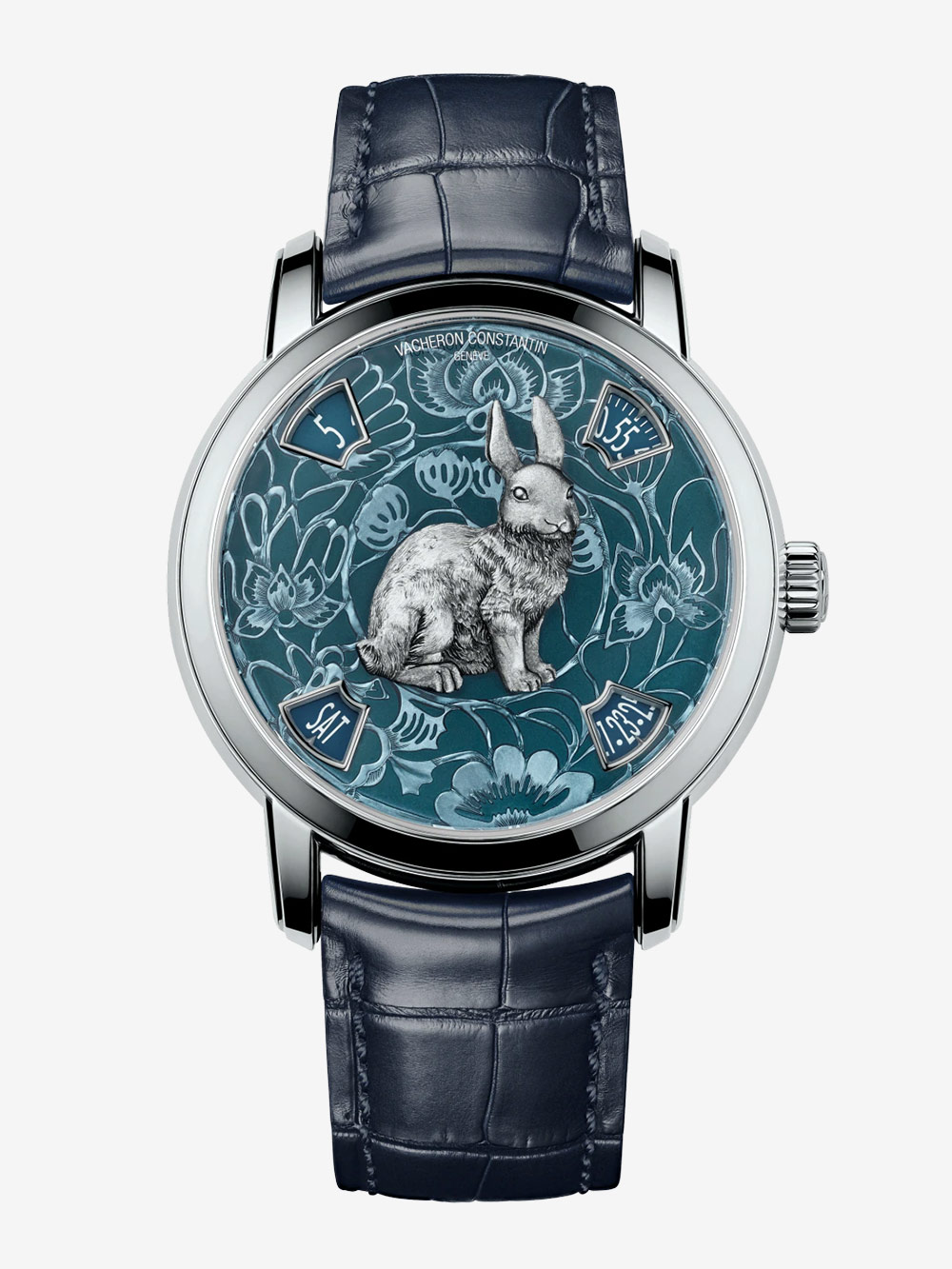 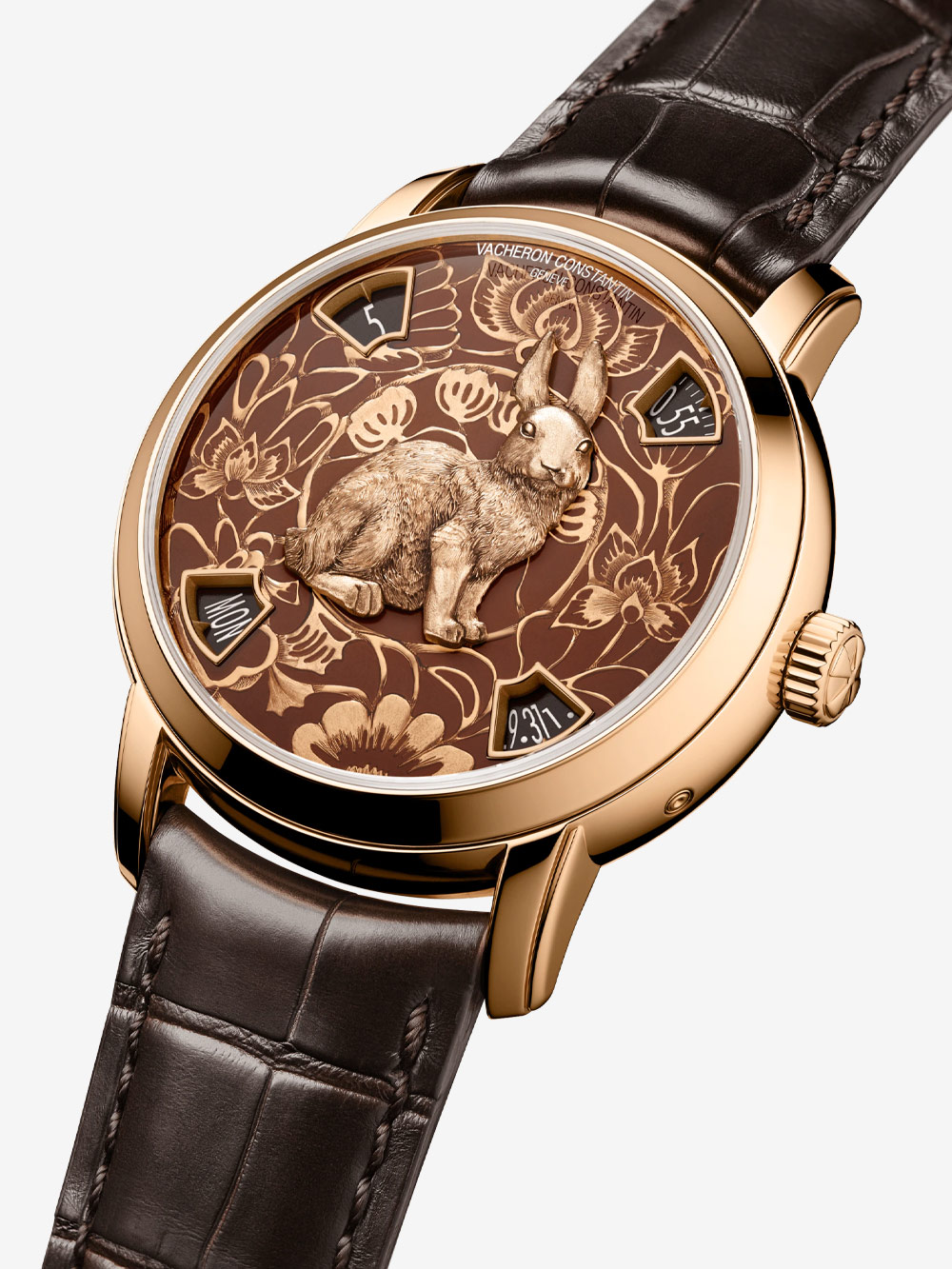 Building on their previous Chinese New Year Métiers d’Art releases, Vacheron Constant have launched two new versions in platinum and rose gold. It’s a handless design with four apertures spread across each quadrant that display hours, minutes, days and date. At the centre is an engraved depiction of a rabbit, sitting atop a Grand Feu dial with floral decoration. It’s powered by the Calibre 2460 G4. Limited to 9 pieces in each material. 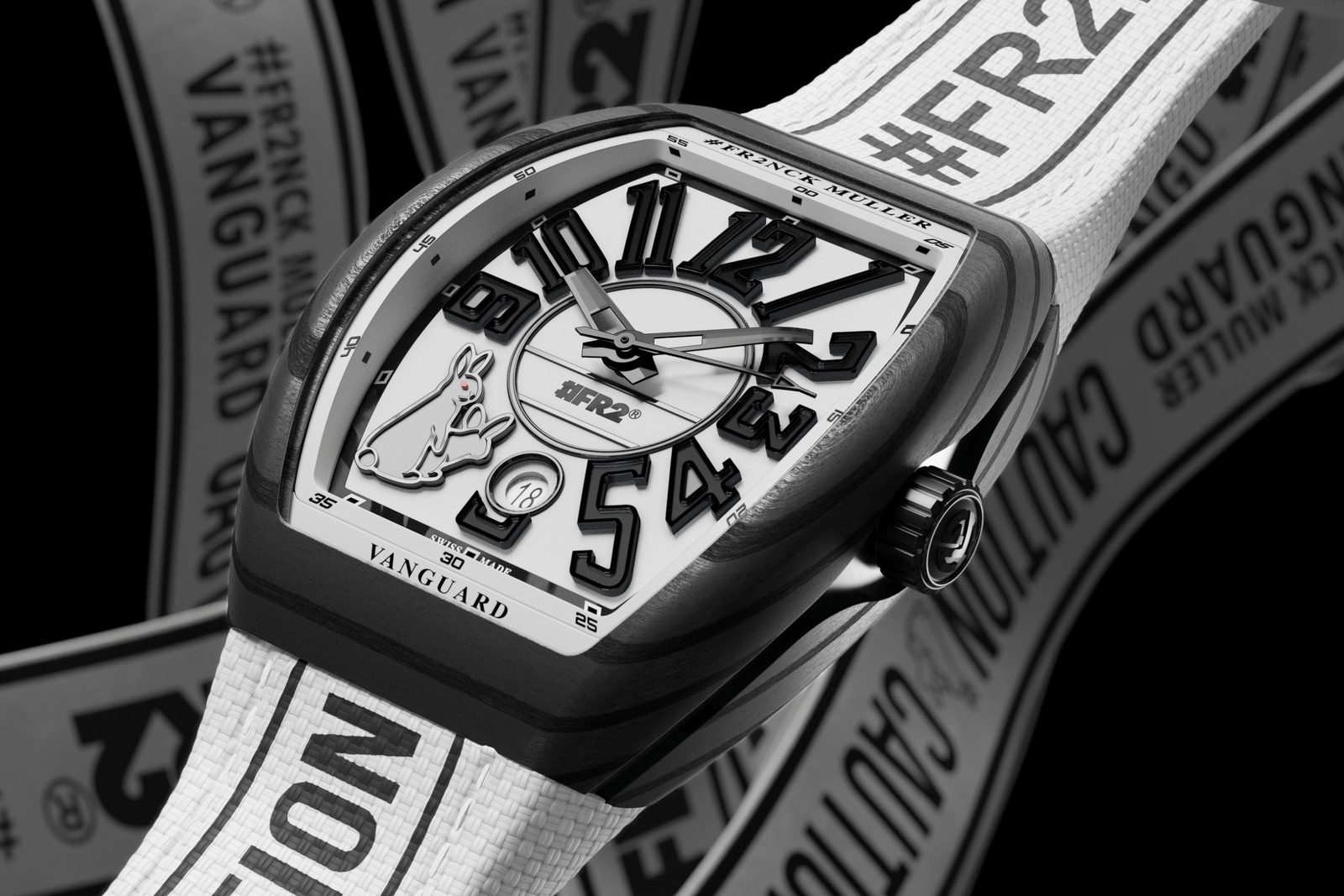 Franck Muller have teamed up with Japanese streetwear label #FR2 on their Year of the Rabbit edition of the Vanguard, dubbed the #FR2NCK MULLER Vanguard. While the release is essentially a monochromatic version of the Vanguard, the 7 o’clock position is occupied by… well, a couple of rabbits going at it like rabbits. It’s actually #FR2’s signature motif known as the Fxxking Rabbits. Limited to 800 pieces. 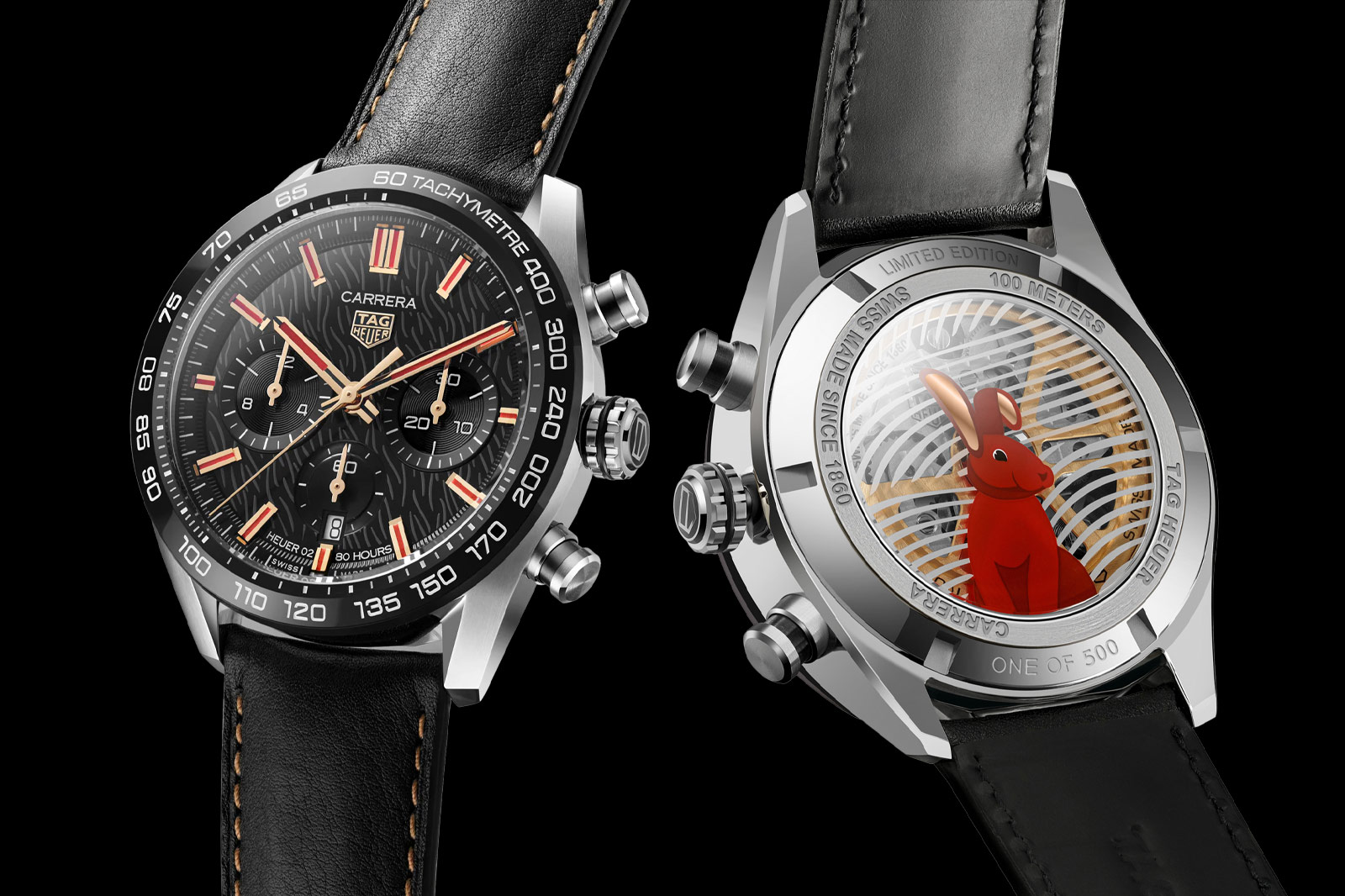 Tag Heuer have released a version of their signature Carrera Chronograph in a limited edition for Chinese New Year. It features red and gold coloured indexes on a fur patterned dial in black and grey. The inclusion of a chronograph complication makes it notably different from last year’s time-and-date model. On the caseback, you can see a cartoon style depiction of a red rabbit. It might just be me, but there’s something menacing and cute in equal measure about the way it’s looking at you. Limited to 500 pieces. 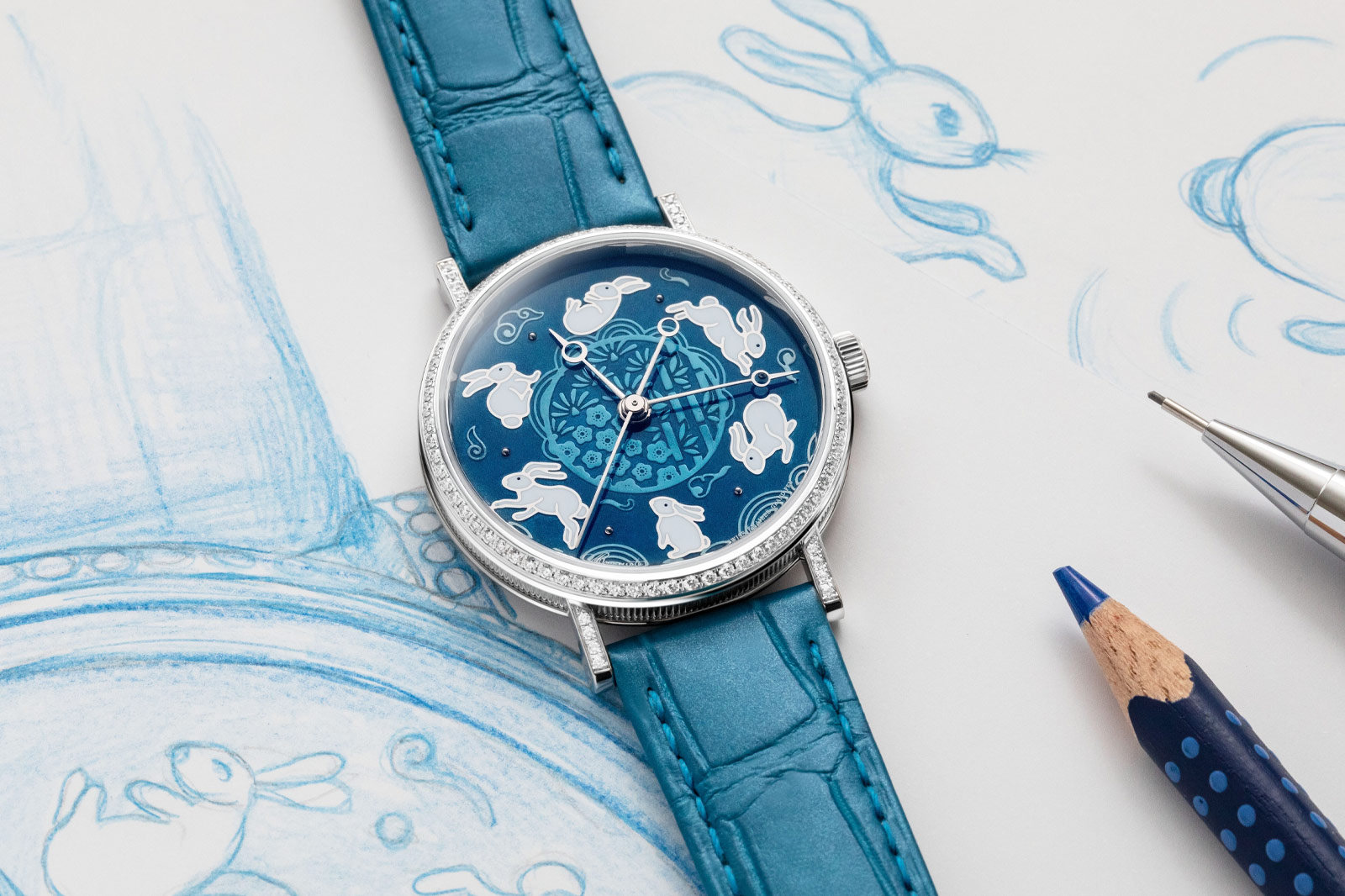 The Breguet Classique 9075 “Chinese New Year” really captures the joy and positivity that’s symbolised by the Year of the Rabbit. Six rabbits tumble and leap across the dial in Grand Feu enamel, each one unique and characterful. I particularly like the fellow at 6 o’clock, staring up towards the central flower motif. At 33.5mm and with a diamond set case, it’s as dainty as it is fun. Limited to 8 pieces. 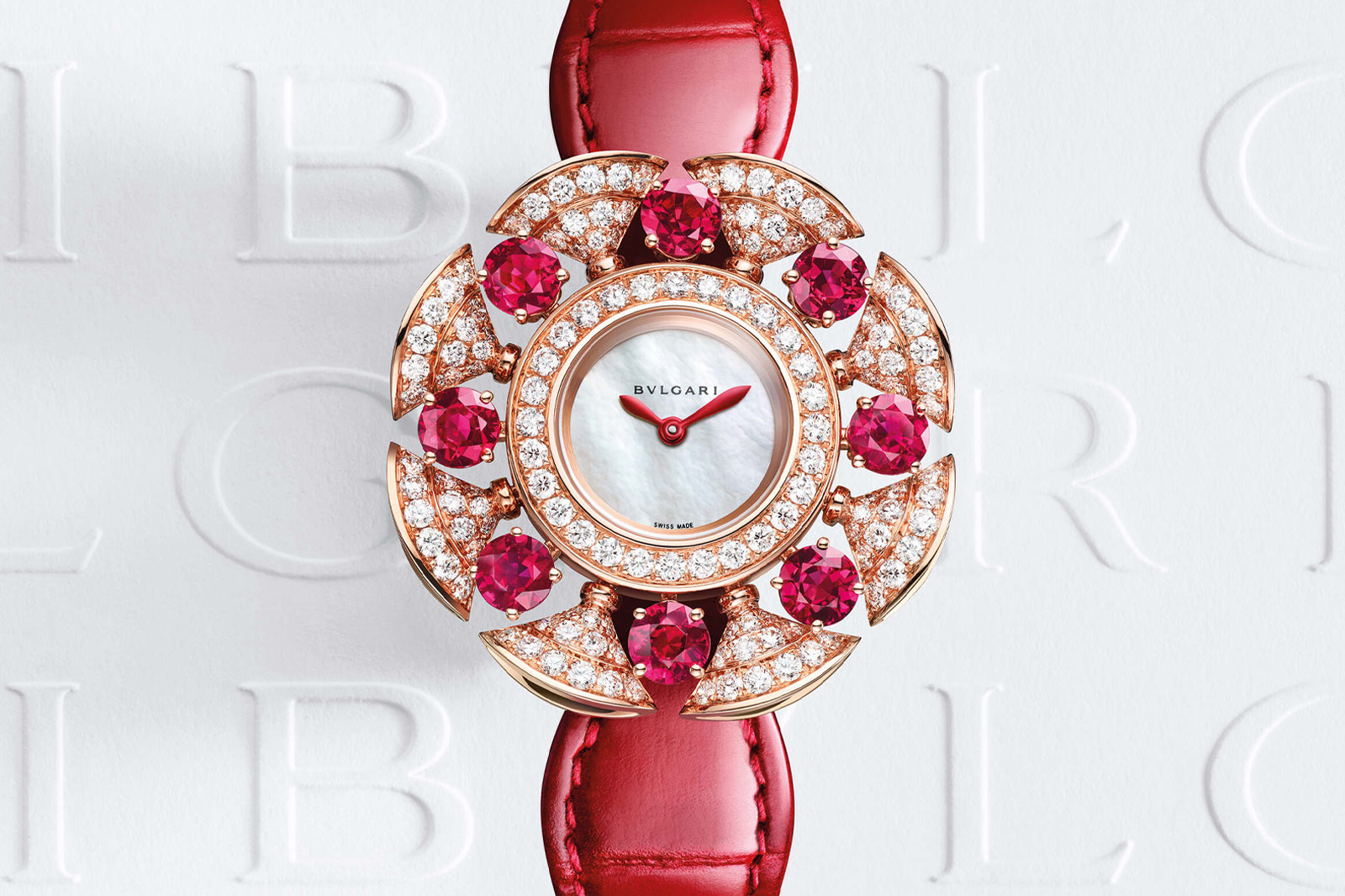 Another haute jewellery piece celebrating the New Year is Bulgari’s Divas’ Dream. It’s frankly spectacular. A rose gold flower with diamond petals and 8 prominently positioned rubies. Between the prominence of red and gold as colours and the relevance of the number 8, the Chinese associations are clear. Although there are no rabbits to be seen. If you want to celebrate in glorious, over the top fashion, Bulgari have got you covered. 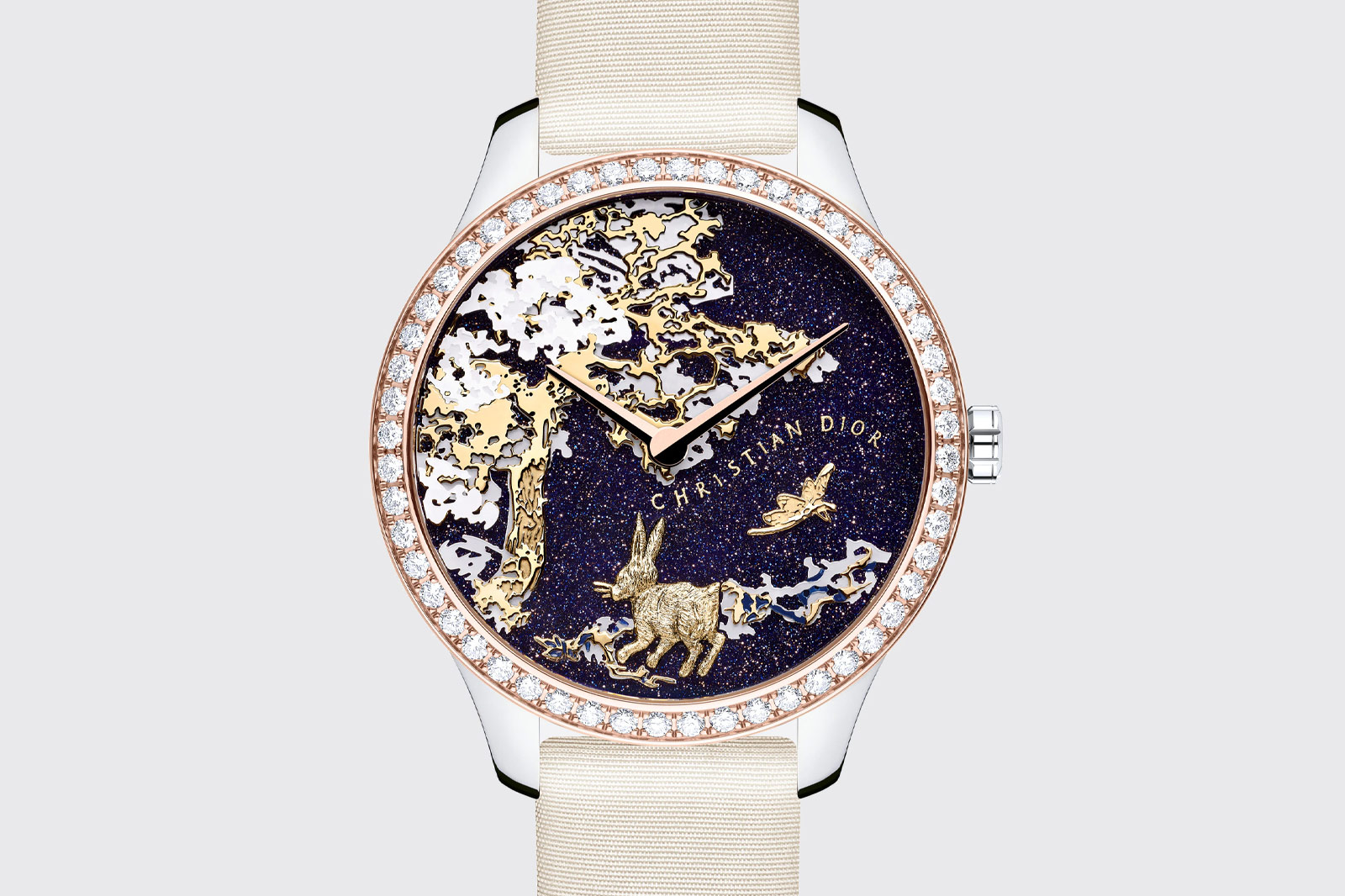 Last year, Dior’s Chinese New Year watch was lovely albeit fairly simple, depicting just the head of a tiger. However, for the Year of the Rabbit they’ve gone all out with a full scene of a rabbit bounding along beneath the boughs of a tree, set against a backdrop of stars. It’s produced with a combination of gold, mother of pearl and aventurine glass, all of which are incredibly luxurious and pretty materials. Limited to 88 pieces. 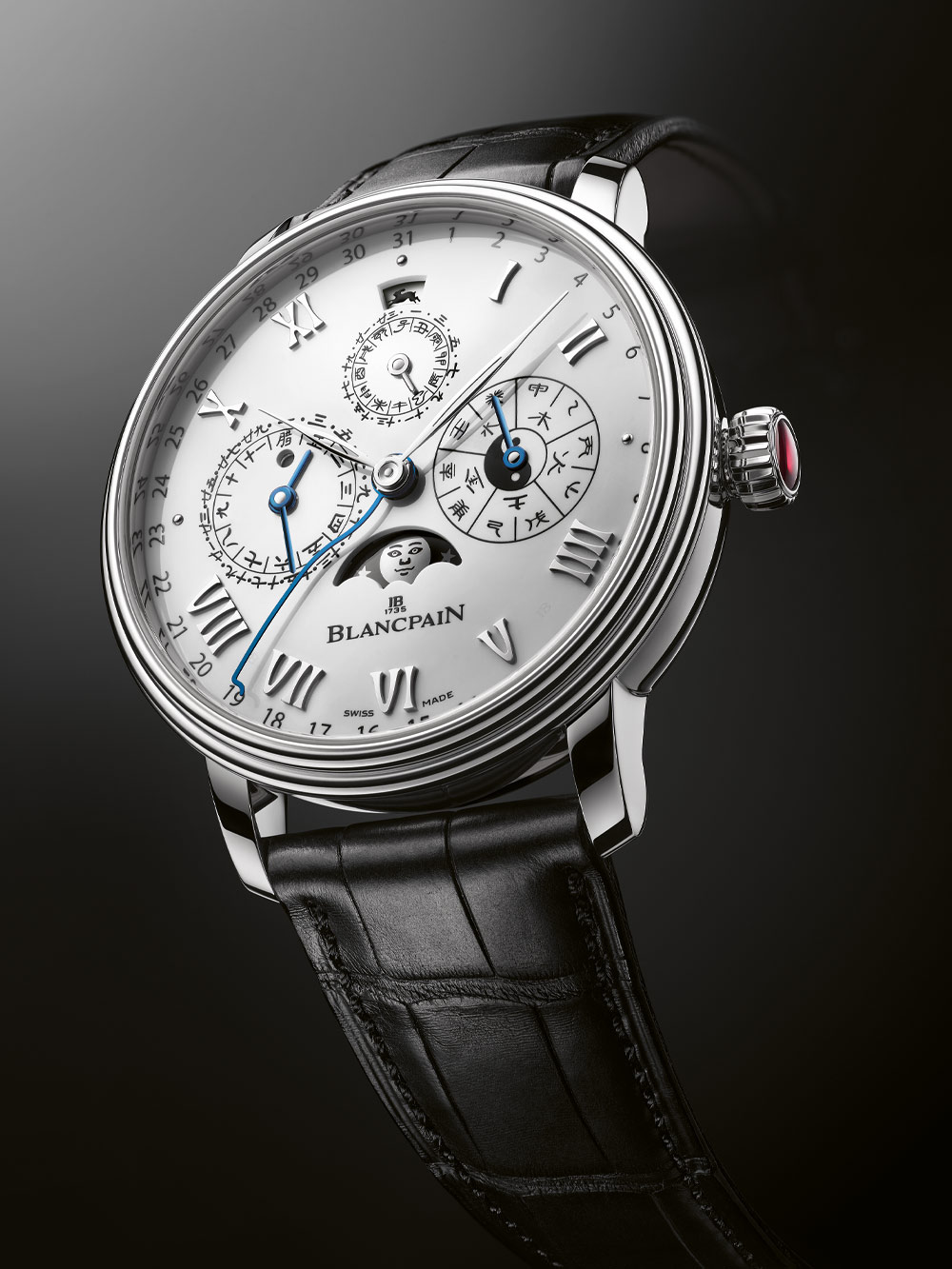 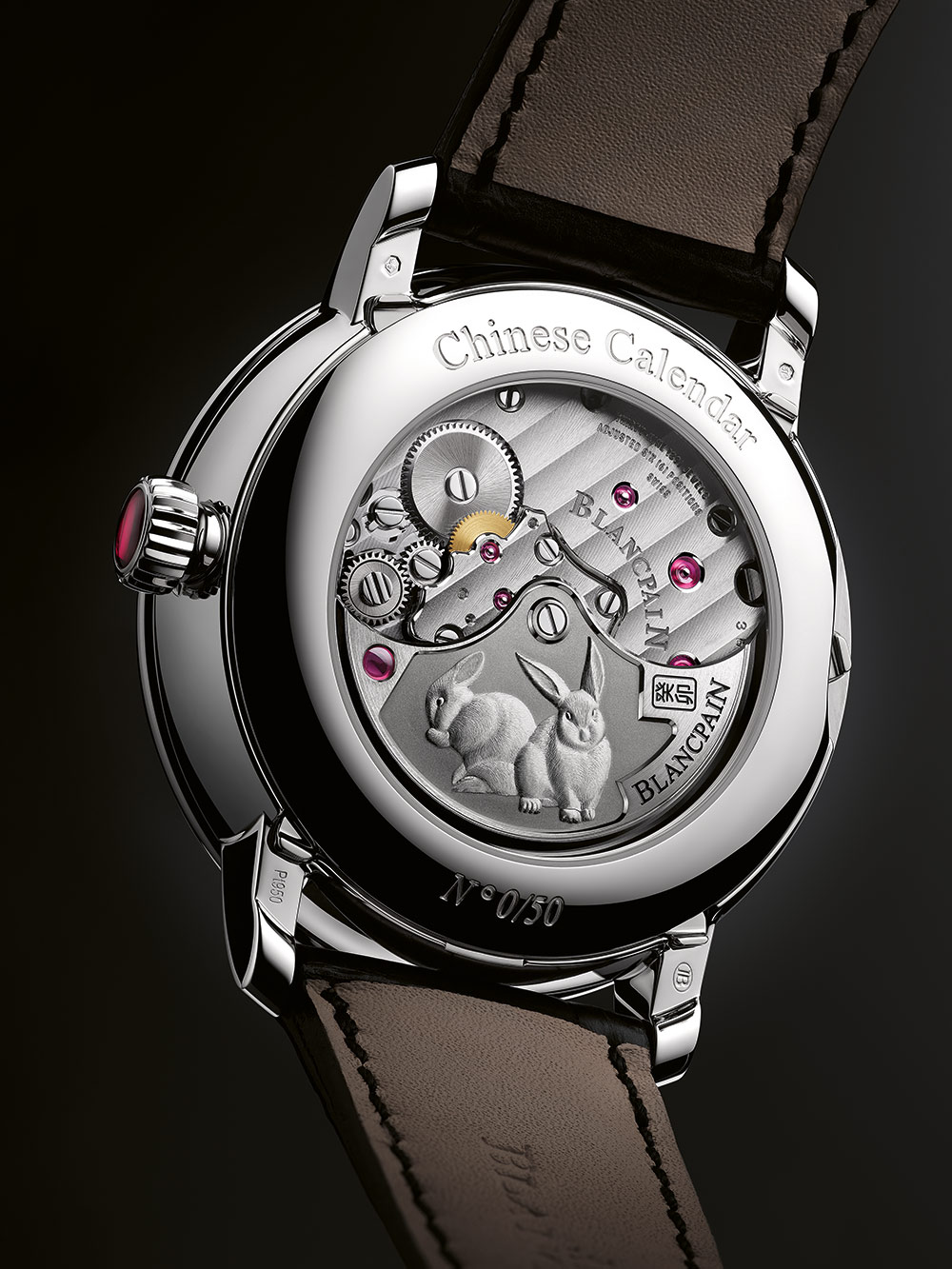 One of the most sought after Lunar New Year releases each year is the latest annual Chinese Calendar from Blancpain. It features a complex dial that displays a huge amount of information including seven functions taken from the Gregorian and Chinese calendars, including elements of the zodiac. If you want a comprehensive calendar watch, look no further. In celebration of the Year of the Rabbit, there are a pair of them engraved onto the rotor of the Calibre 3638. Limited to 50 pieces.