It’s easy to get bored of the watch on your wrist. No matter how much you adore your daily wearer, it’s hard not to admire the greener grass on another’s wrist. Sure, you’ll probably end up switching back, but that dalliance in new territory is all too inviting.

The issue is that a change of horological pace means owning multiple watches. That’s not uncommon of course – we’re sure most people reading this have a few timepieces to call upon – but there are ways to get a bit more out of your watch. Modularity, for example. 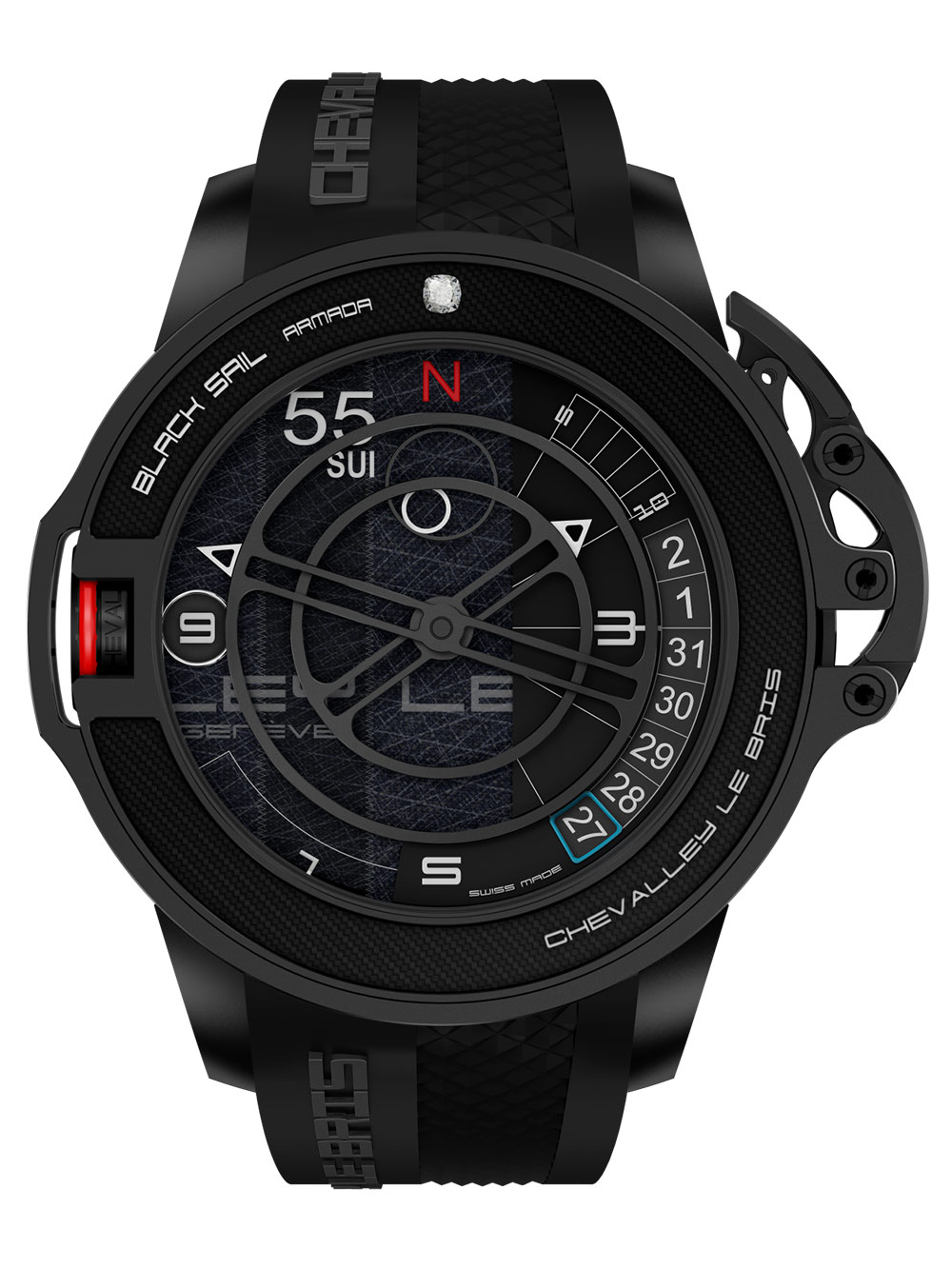 Modular watches are a niche proposition in the watch world. The concept is that you can switch parts out to create new looks without actually plumping for a whole new timepiece. There have been a few brands that have attempted it in one way or another, but Chevalley le Bris may just have the most intriguing one to date.

Despite the moniker ‘collection’, the two pieces that make up Chevalley le Bris’ Armada are inseparable from one another. On one hand you have the Element No. 4, with a deck-inspired dial and an ornate timekeeping framework inspired by the cardinal points of a compass. On the other hand, you have the Black Sail, a stealthier, performance-oriented piece more like a racing catamaran than a classical sailing yacht. 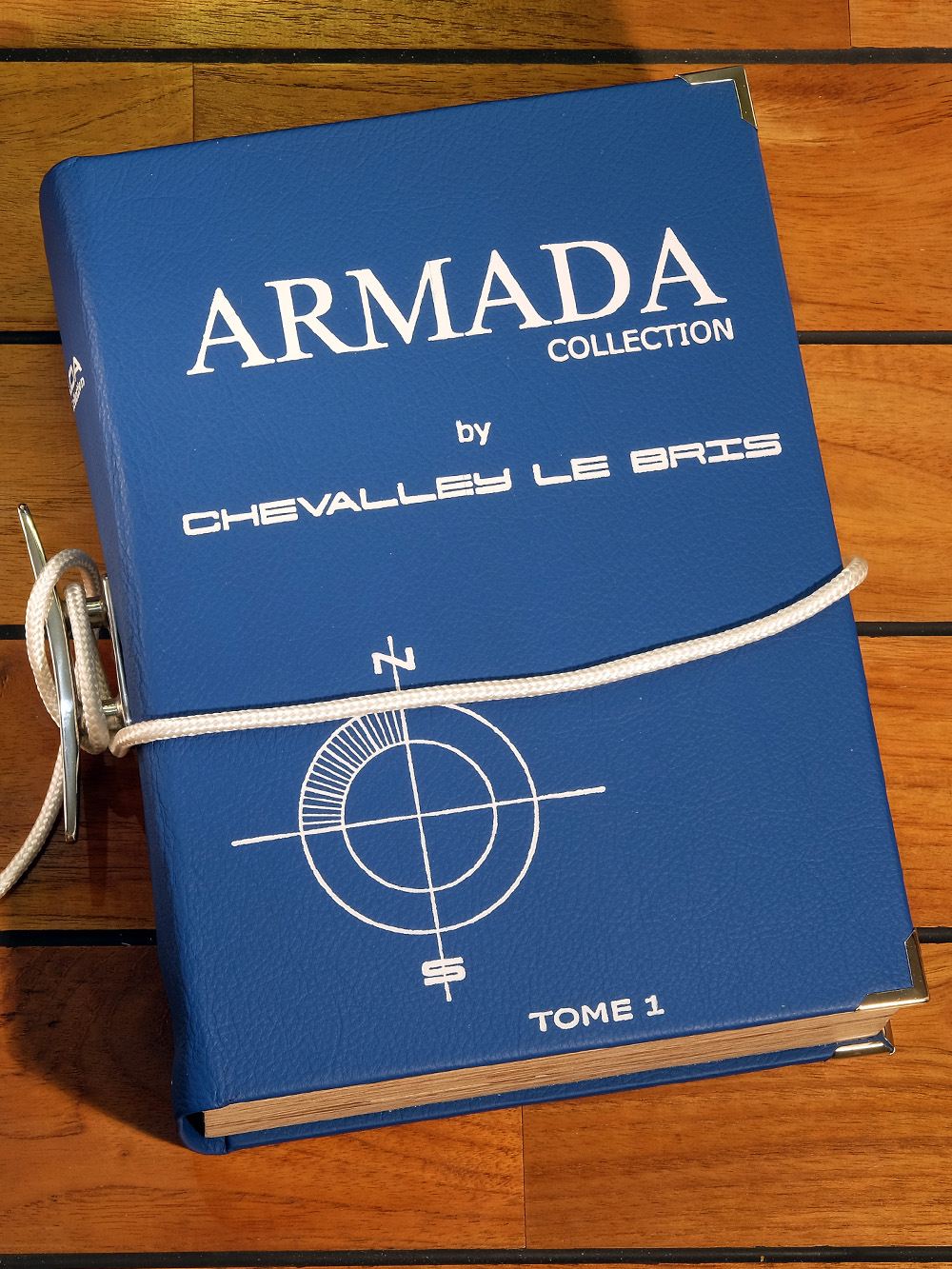 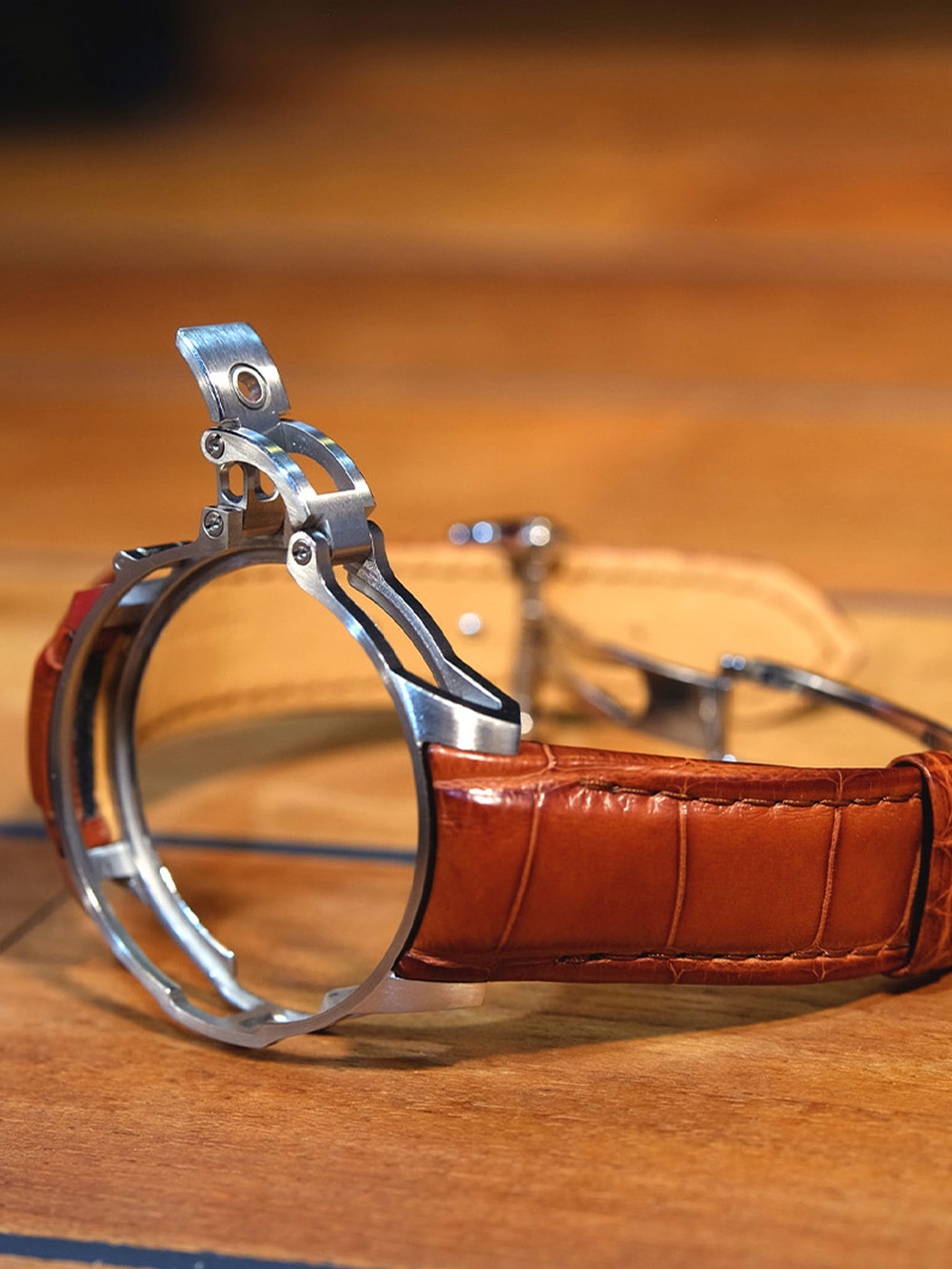 They’re both distinctive with their left-hand crowns, multi-layered construction and uniquely nautical looks. What really sets them apart though is hinted at by the lever at one o’clock. While it looks similar to the kind of intense crown guards you see on the likes of Graham, it’s actually a clasp that goes around the entire circumference of the watch body, holding it in place. 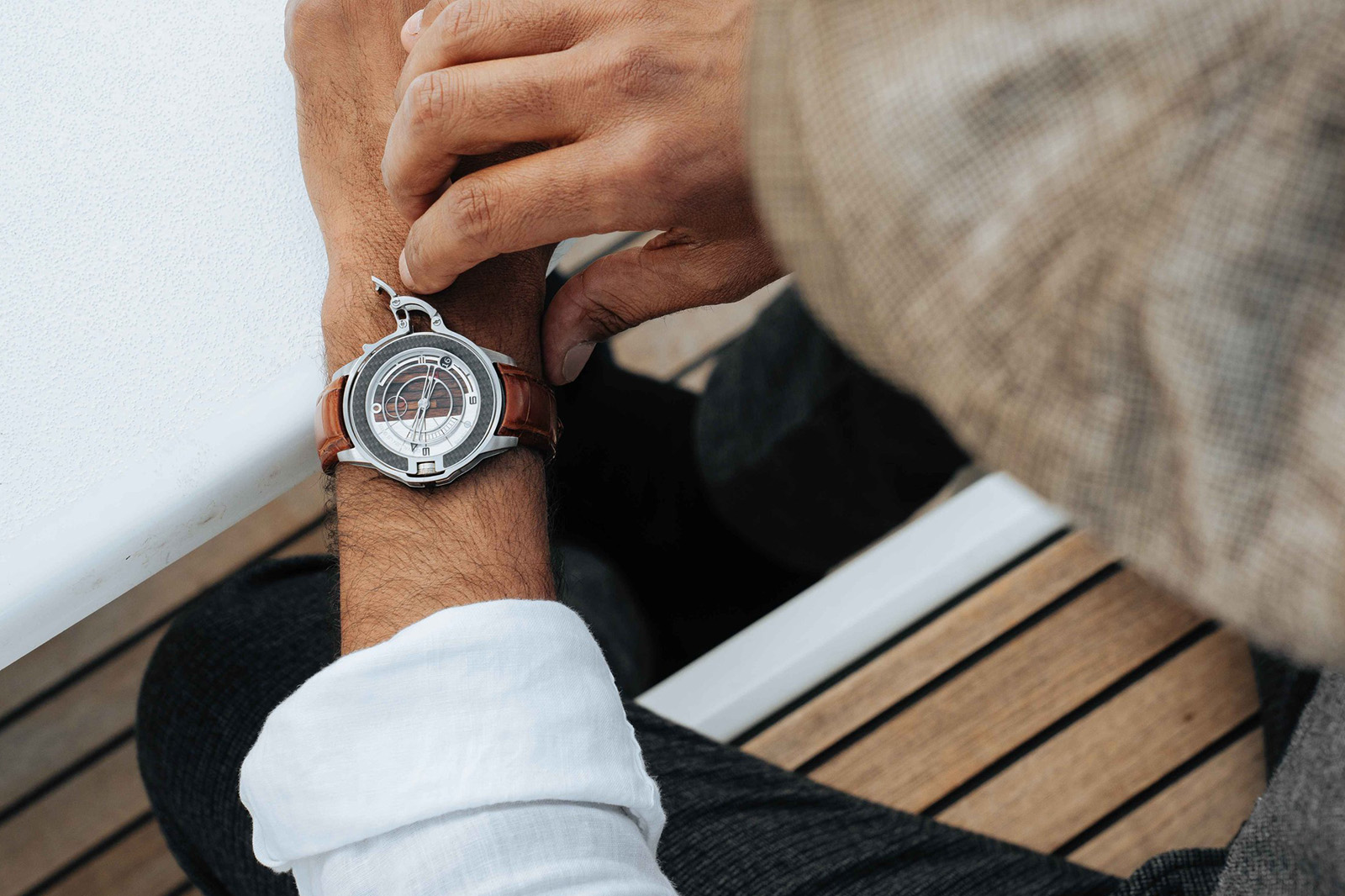 This means that by using that lever, you can pop the watch head out of its framework, allowing you to swap another in. You can add a splash of performance carbon to the wooden deck and steel of the Element No. 4 or tone down the all-black stealth of the Black Sail, whatever you feel like taking out for a spin today – and that’s just if you want to wear it on your wrist.

Along with the two wristwatch clasp circles, the pair are also presented with two pocket watch variations, complete with a chain. That’s a total of eight different ways to wear the Armada, all wrapped up in a handsome, useable logbook more suited to the limited space below decks than a bulky watch box. 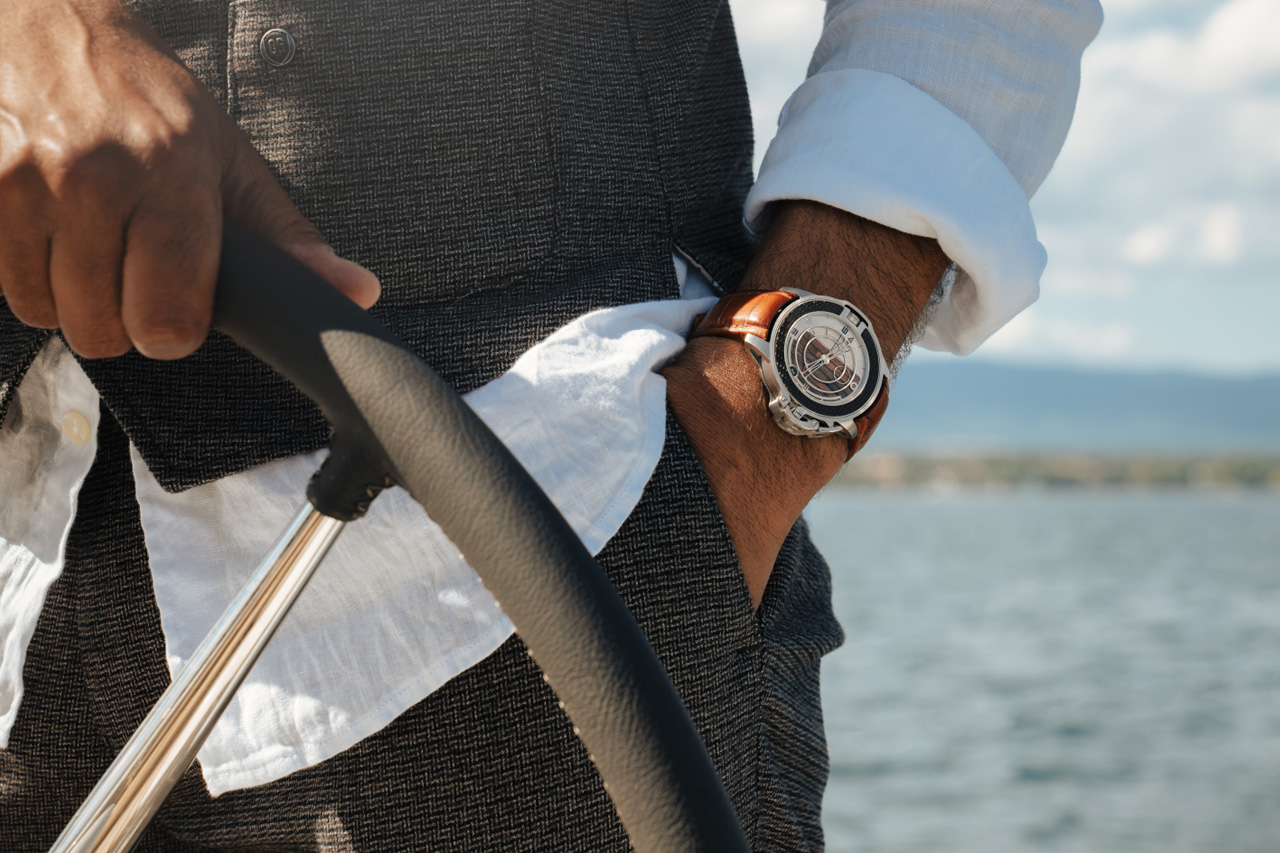 As we said, this kind of modularity has been attempted in the past in various ways but has never really taken off. Generally, that’s been because of the compromises necessary to make it work. There’s no danger of that here. Not only are the watches themselves impeccably machined to an obsessive degree, the movements inside are from Vaucher Manufacture Fleurier – more than a cut above your bog-standard ETA calibres.

It’s a level of quality that’s reflected in the price; the Chevalley Le Bris The Armada Collection Logbook isn’t an impulse buy. Each logbook containing a pair of heads and set of four gaskets with straps and chain will set you back CHF 75,000 (approx. £63,500) in a limited series of 15. It’s pricey, but there’s no denying the level of longevity you’re getting. Now imagine what it’ll be like when the next variations are released… the choices will be virtually endless.