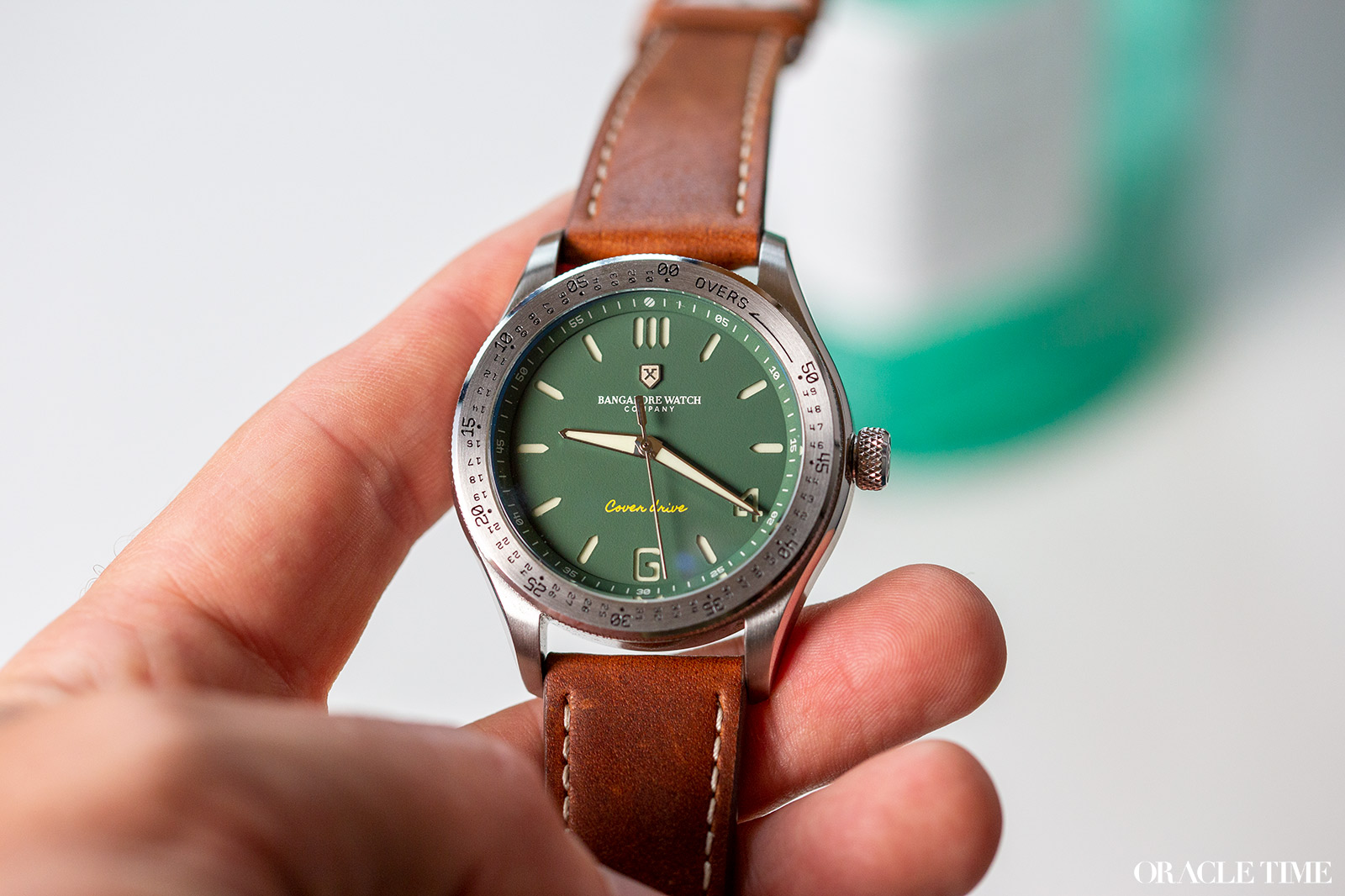 Cricket may have originally been a British export but the game has found a completely new lease of life in India, so much so that Bangalore Watch Company (an Indian watchmaker) has created a watch dedicated to the sport. Named the Cover Drive, after the famous shot, it’s the ideal companion for settling in to watch a test match and I had the chance to get hands on with it.

There’s a certain irony to strapping on an Indian cricket watch as an Englishman. I am immediately reminded of the stories my dad used to tell me of his experiences teaching in India, where Cricket is so ingrained in their national identity that a radio would play with the scores during his seminars and he quickly learned not to turn it off. He’s lucky the Cover Drive didn’t exist back then either, because the room would have been filled with the clicks of a dozen unidirectional bezels as people use the Cover Drive’s ability to track up to 50 overs, which is more than an entire Twenty20 test. 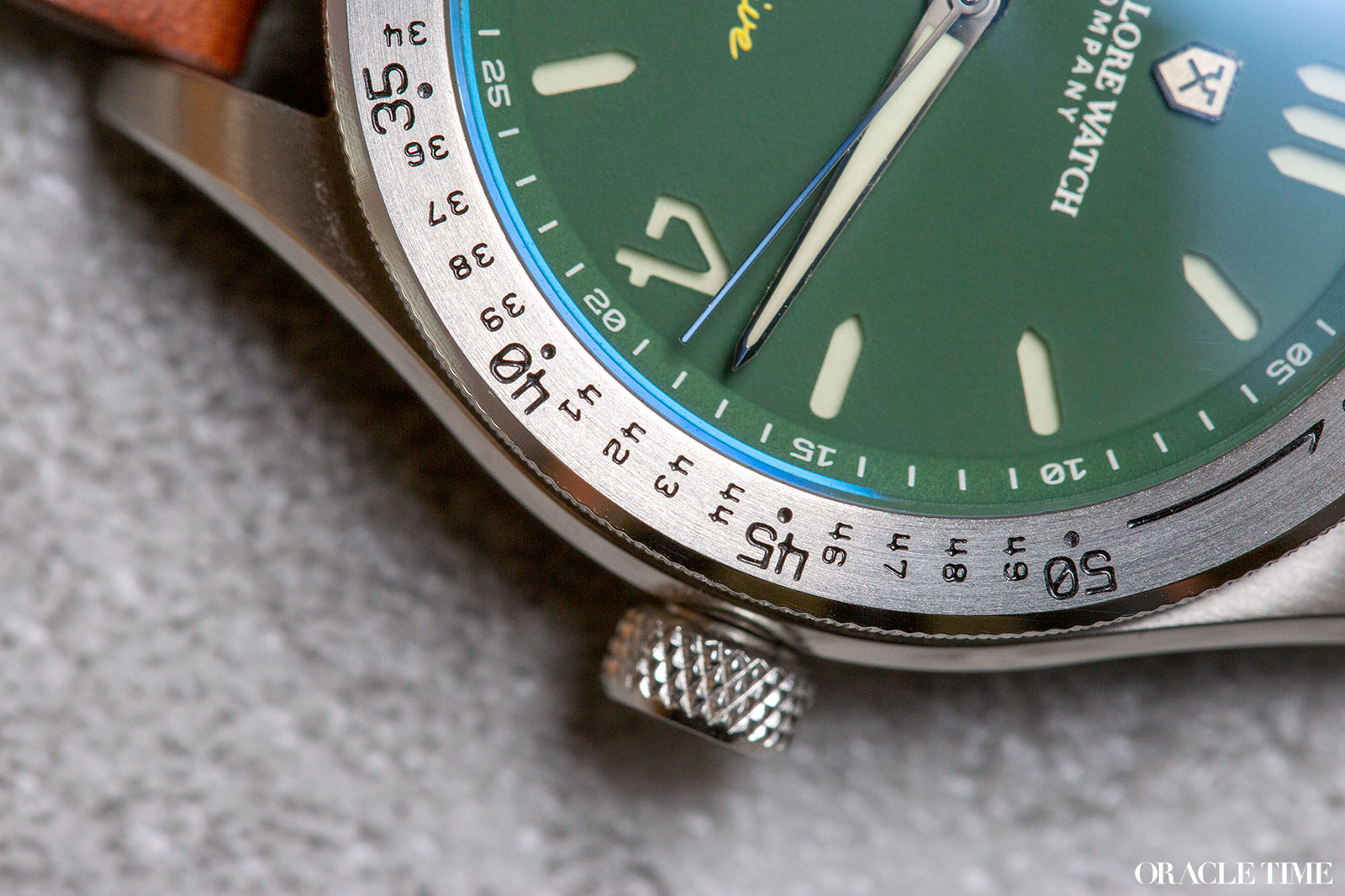 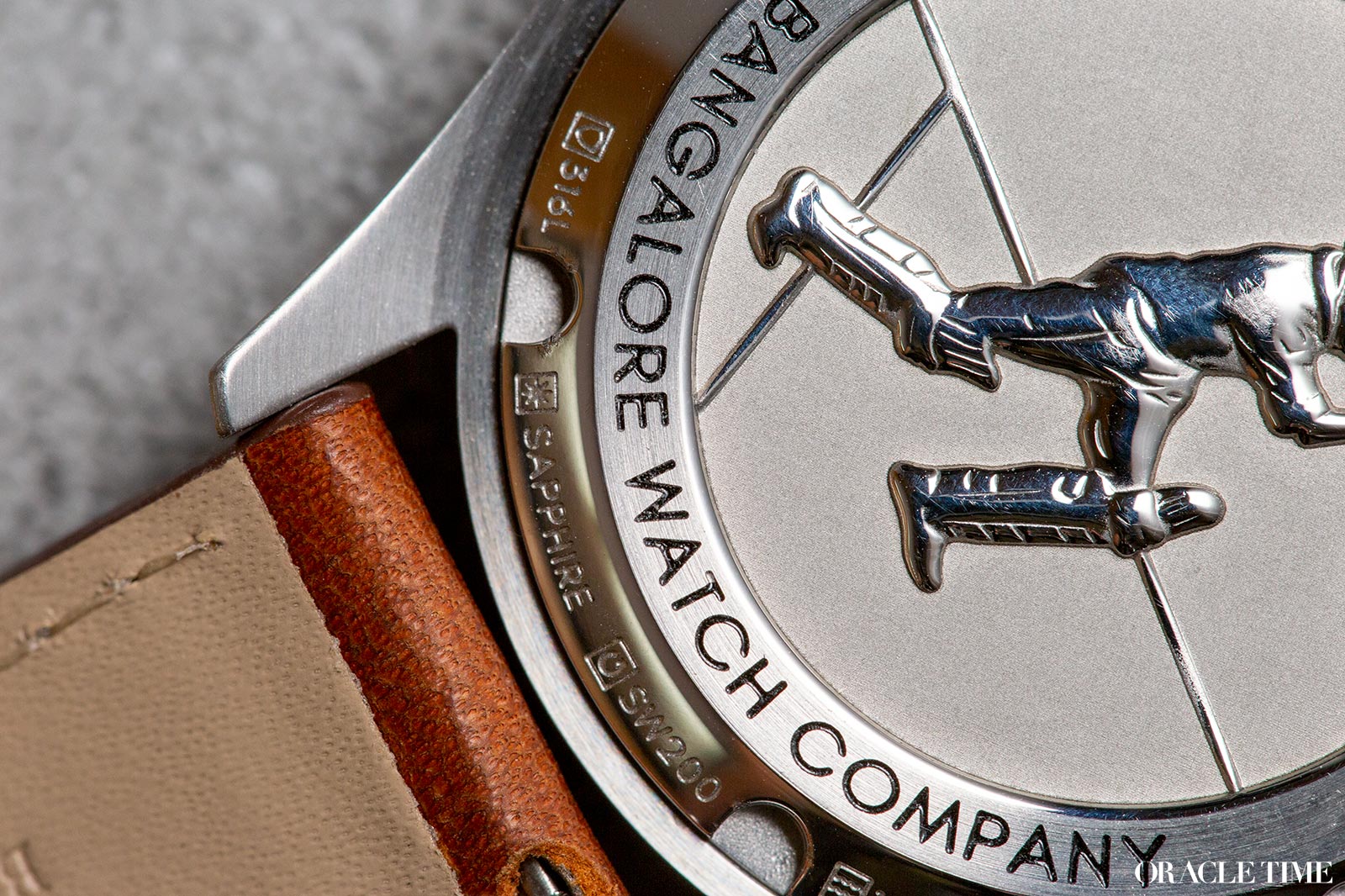 That being said, the bezel is immensely satisfying to use. It sits on the 40mm diameter stainless steel case, which has alternating polished and brushed surfaces for an attractive contrast. It’s also not too heavy on the wrist and wears very comfortably. For a little visual flair, the screw-in caseback has an engraving of a batsman.

The cricket timer (cricket-ometer?) bezel and rear engraving aren’t the only cricket references to be found on the Cover Drive. The sandwich dial is available in three different colours, brown, green and black respectively known as the Pitch, the Outfield and the Pavilion. I’ve got the green Outfield version here, which feels apt given the dominance of the colour this year. The dial is accompanied by silver coloured, lume-filled hands that are a slight surprise, because in BWC’s product photos they appear black, although the difference receives no complaints from me. 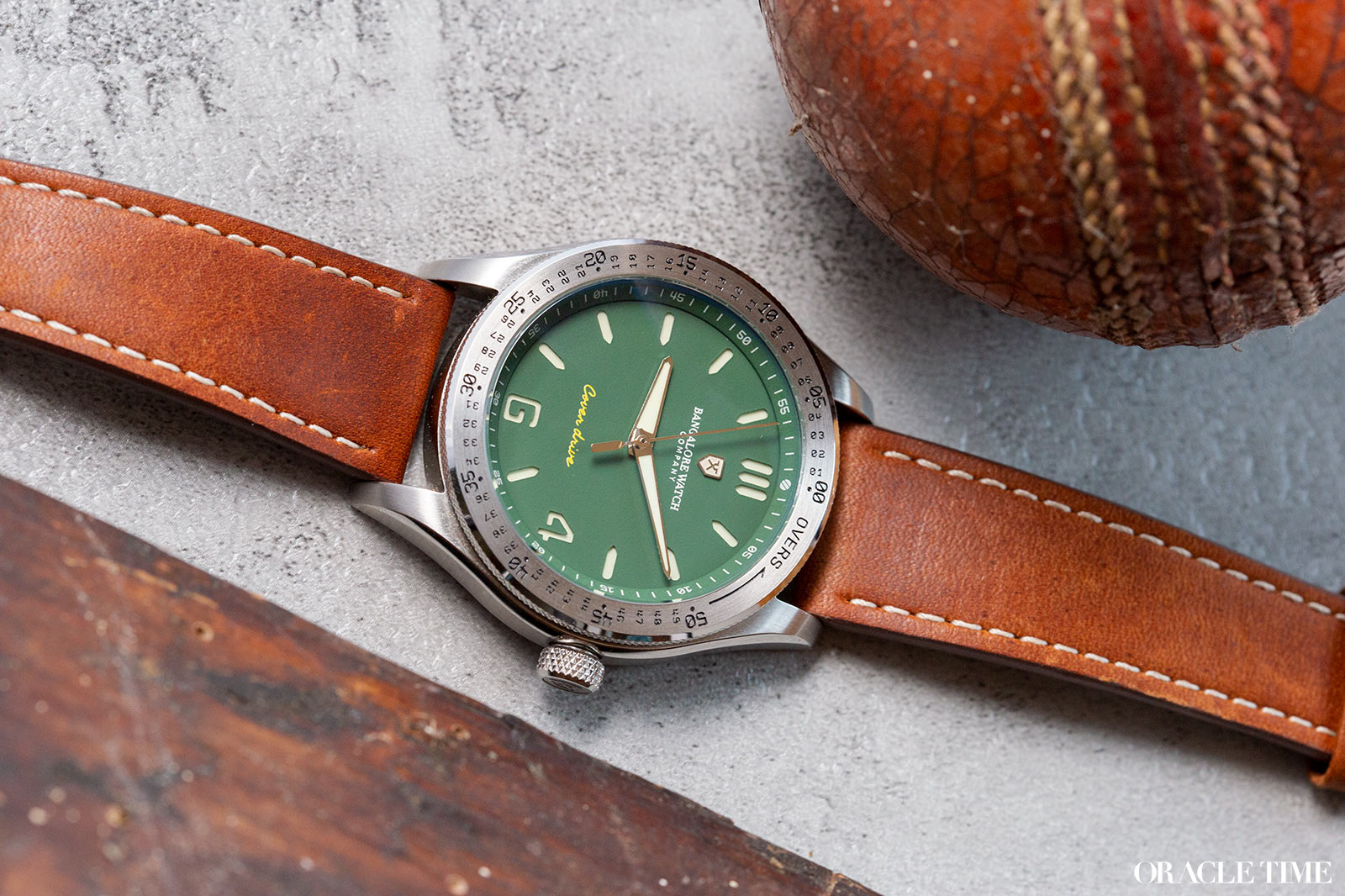 But wait, there are yet more cricket references: the hour markers are shaped like stumps, with a full wicket at 12 o’clock and the 4 and 6 hour markers are given in Arabic numerals because of the importance of those numbers in the sport, denoting the boundary shots that batsmen strive for.

It’s at this point that I have to put my hands up and say I’m not the biggest cricket fan. In fact, I’ve just about exhausted my cricketing terminology, but that doesn’t mean I can’t appreciate the execution of the sporting references on the watch even if I don’t fully understand them. 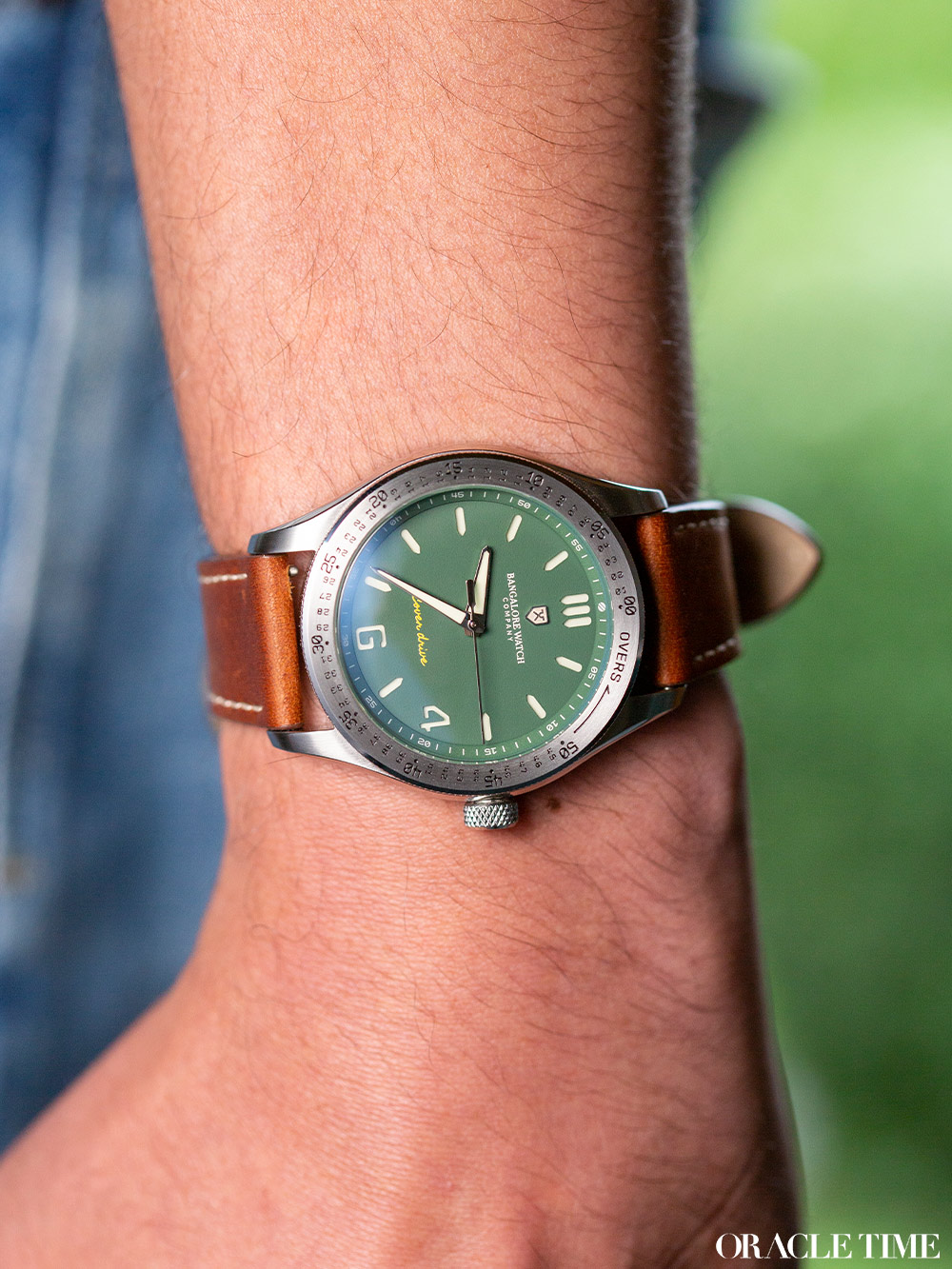 Something I’m more familiar with is the Sellita SW200 movement housed inside, which is a staple, off the shelf movement utilised by many brands looking to make their timepieces accessible. With a 38-hour power reserve, it doesn’t quite stand up to the standards of the top end brands, but at least it’ll outlast a Twenty20 game. Also, the SW200 typically has a date function, however BWC have decided not to include one which gives the dial a very neat feel.

The Cover Drive comes on a light brown leather strap with stitching in the same style as a cricket ball, which is both another reference to the game and a stylish treat. The watch is available from Bangalore Watch Company at a price of £548.03. If cricket is your religion (not an overstatement for some people) then the Cover Drive is a fun and potentially useful watch. For the rest of us, it’s a charming novelty.