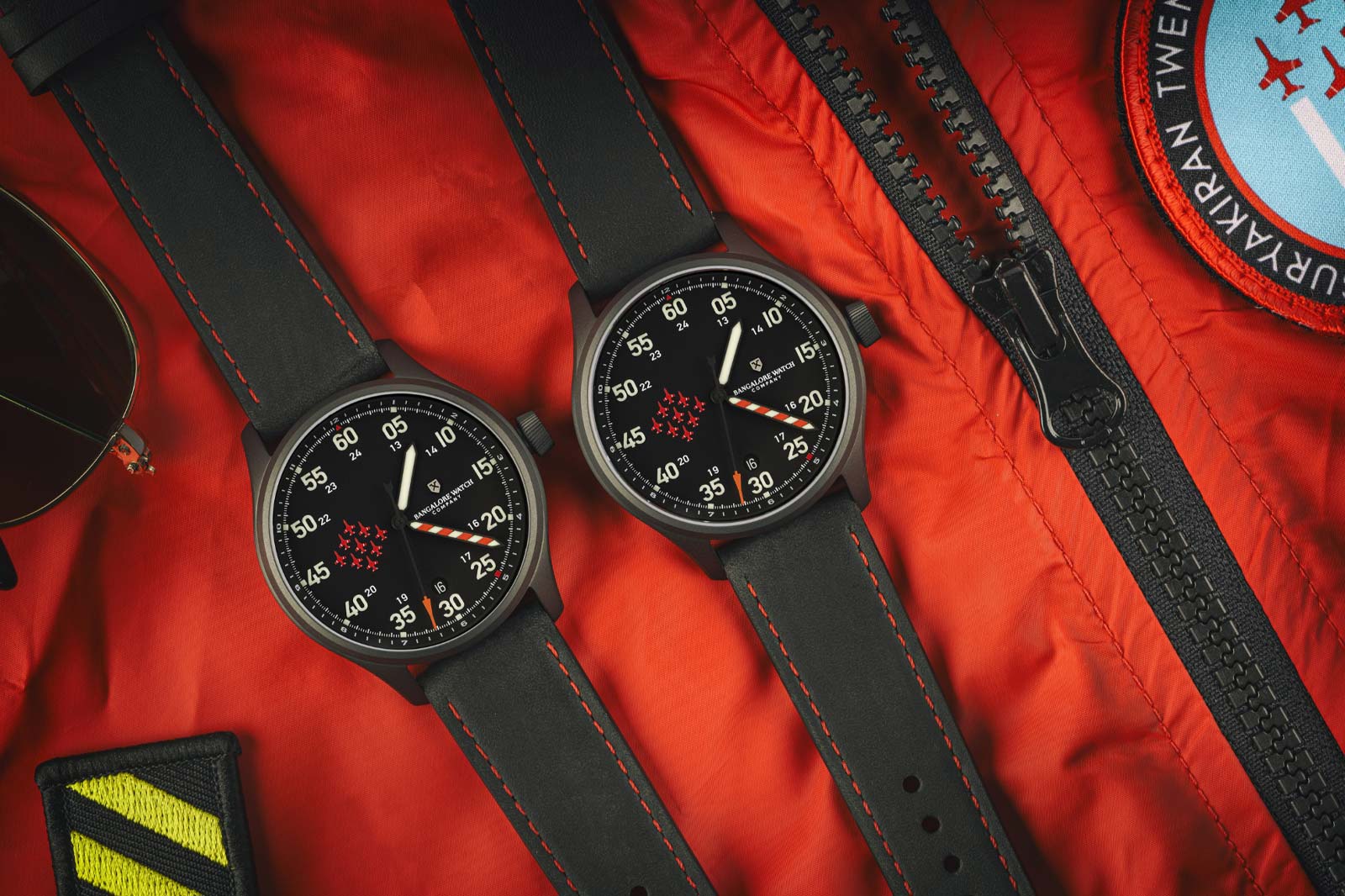 As one of the only microbrands to come out of India (to our knowledge), Bangalore are low key one of the most intriguing and unique microbrands on the market. Their connection to India is thematically visible through all their watches, with each piece championing an iconic part of the country’s culture. For example, the Cover Drive celebrates the national pastime, cricket. Now they’re turning their eyes to the sky with the limited edition MACH 1 Synchro, a watch that pays homage to India’s Air Force formation aerobatics squadron.

That aerobatic squadron is called Surya Kiran Aerobatics Team (SKAT), which translates to “Rays from the Sun”. They’re the Indian equivalent to the Red Arrows and have a similarly red livery, although SKAT planes also have distinctive white stripes on their bodies and wings. You can see the nine aircraft that make up the squad on the dial of the MACH 1 Synchro in diamond formation at 9 o’clock. 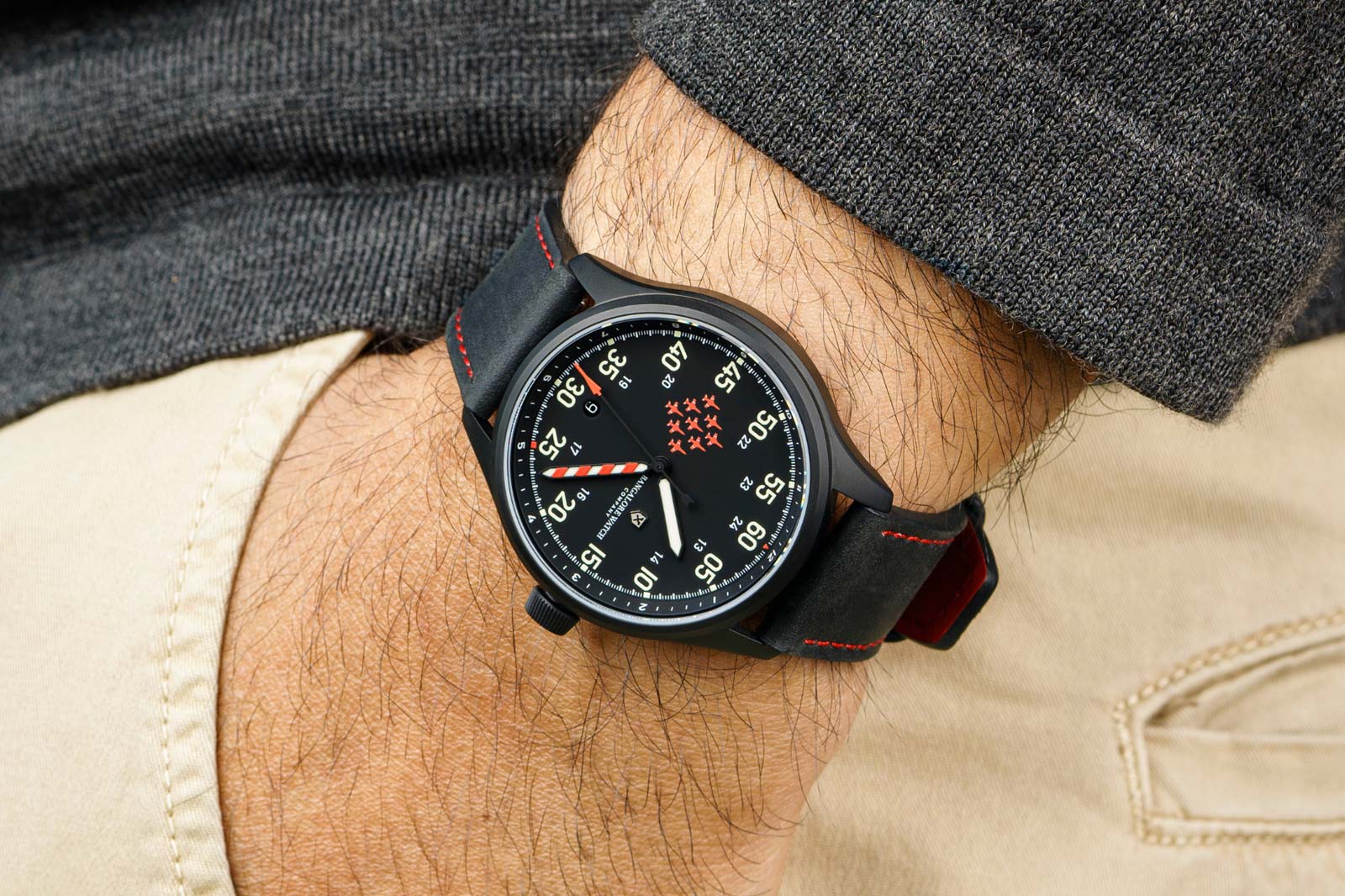 Elsewhere on the face of the watch, the minute hand also depicts the signature colours of SKAT. A fun aspect of which is that only the white portions are filled with lume meaning in low light conditions the striped pattern is maintained. Another nod to the elite aviation team is the red index at the 25 minute marker, which references last year’s 25th anniversary of the squad’s founding in 1996. The Bangalore Mach 1 Synchro’s display is completed by a date window at 6 o’clock and inner 24-hour scale. 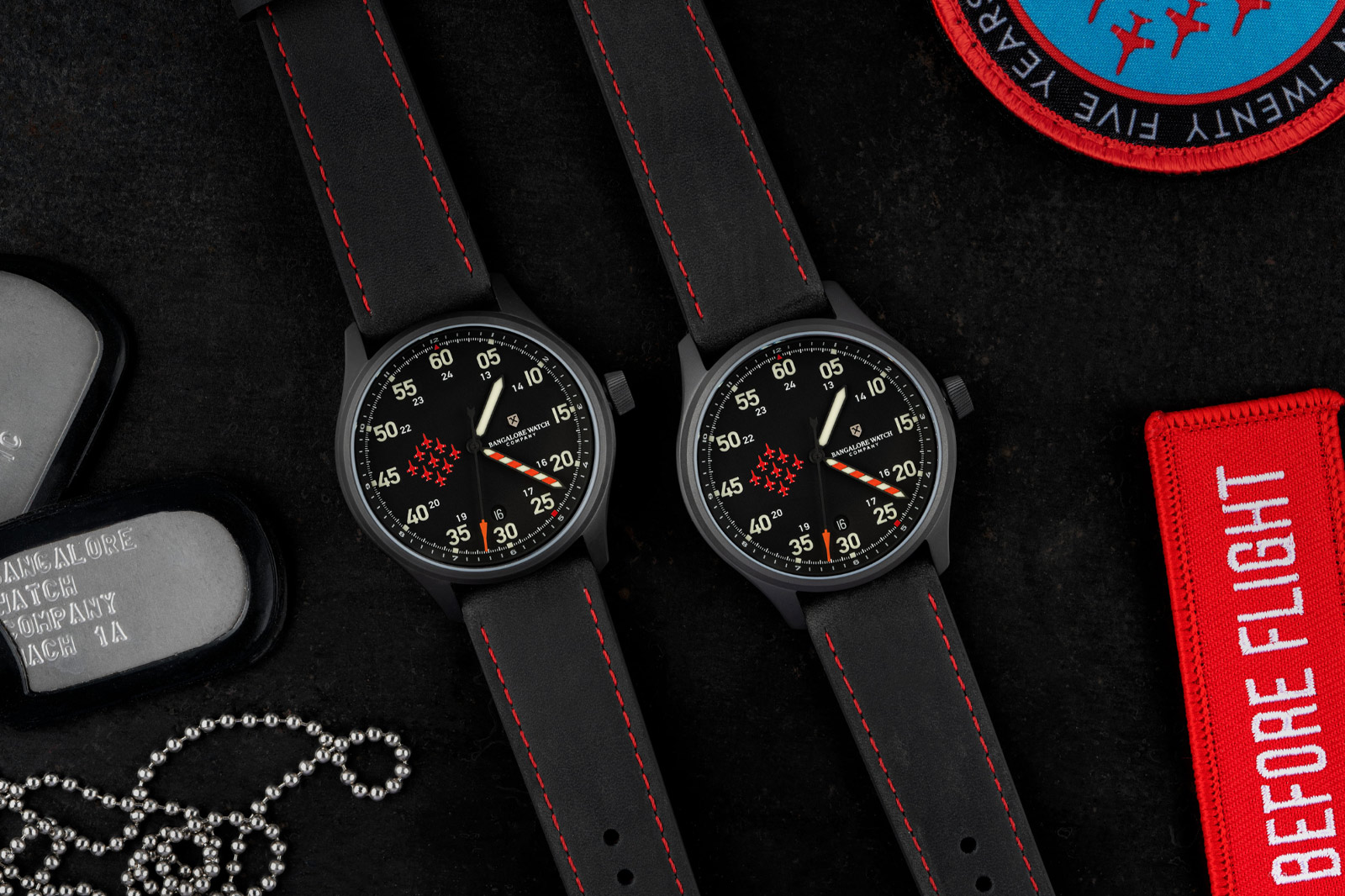 The case is based on the existing MACH 1 collection, meaning it’s stainless steel with a stealthy black PVD finish and a diameter of 40mm. What makes the Synchro’s case different to the MACH 1 stealth is that it has a commemorative caseback that celebrates Surya Kiran and denotes the watch’s limited edition number, out of the 125 that are available. It’s presented on a black leather strap with red stitching. 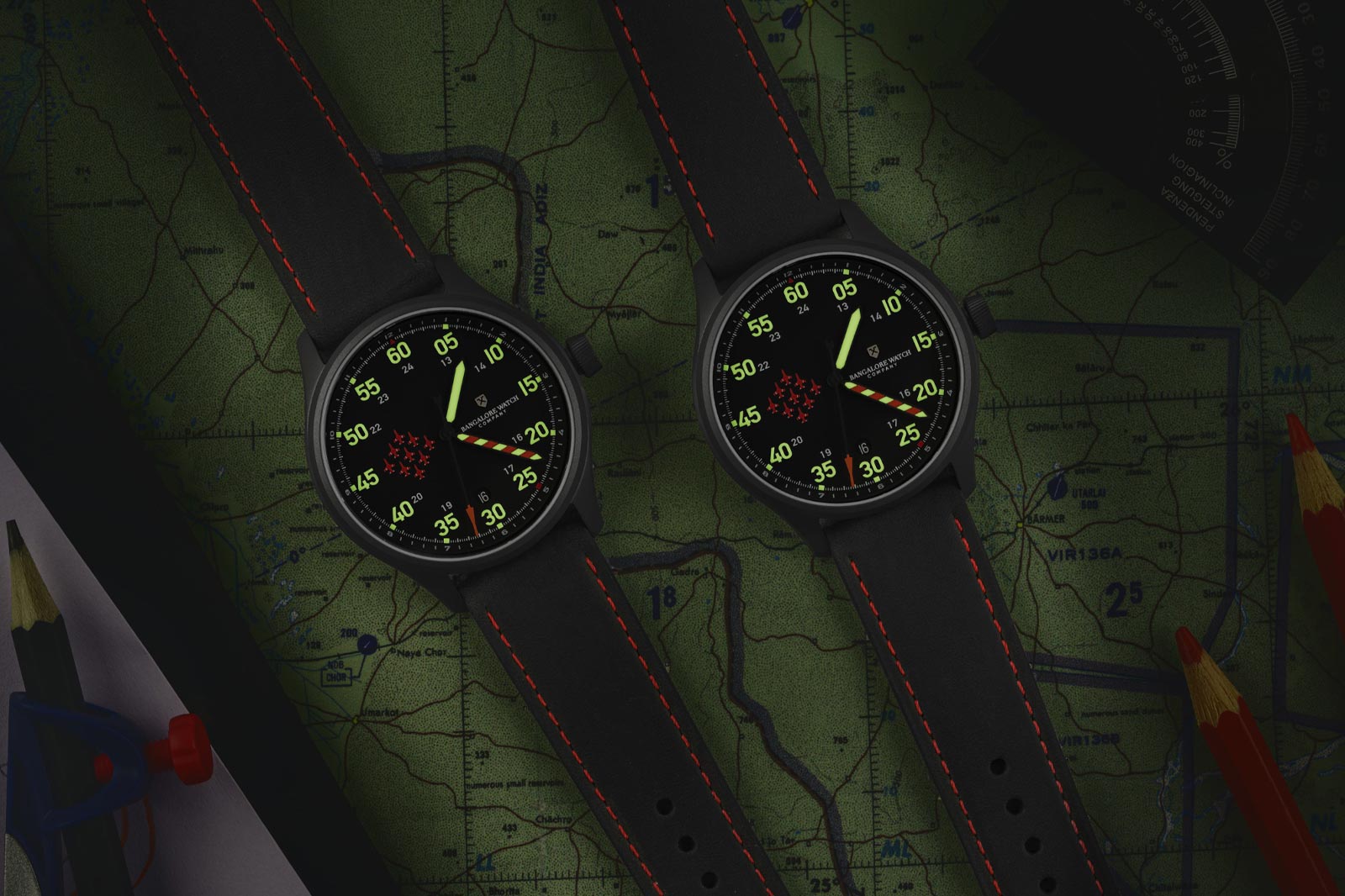 Inside, MACH 1 Synchro houses the Sellita SW200-1 automatic movement, which is a solid, work horse calibre that’s widely available and reliable. The main criticism levelled at it is that the 38-hour power reserve isn’t as high as most collectors would like, but that’s not a major issue. Plus, considering how niche a watch celebrating SKAT is, if it’s something you’re passionate about then nothing will stop you getting the MACH 1 Synchro. 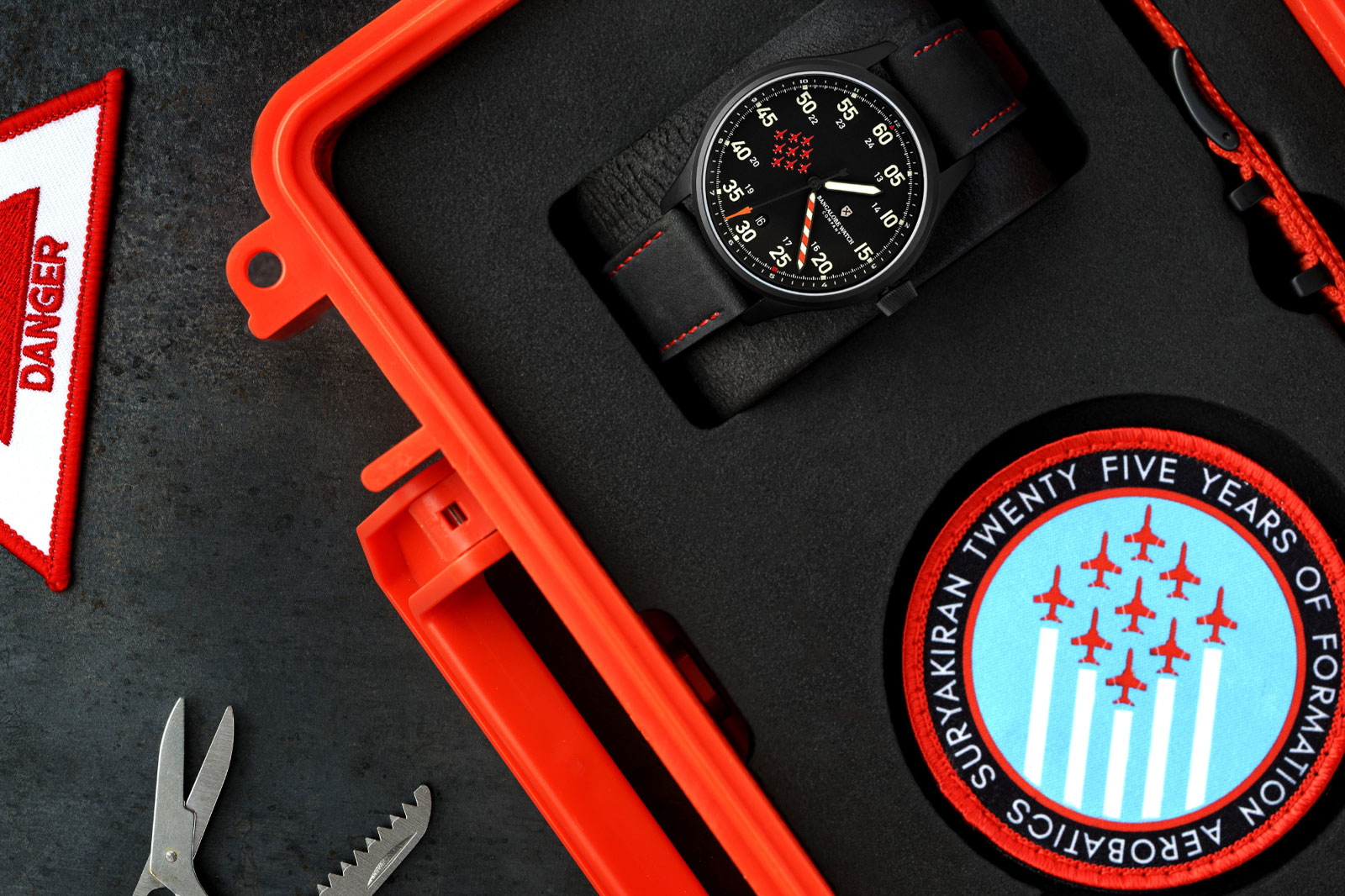 Speaking of passion, the box set also comes with a 25-year celebratory mission patch for repping the squad out and about as well as an alternative red nylon strap for the watch. In total, the limited edition has a price of £1,600. With only 125 being produced and a growing interest in alternative brands such as Bangalore, plus all the Surya Kiran connections, it’s a watch that could find a place in any collection.