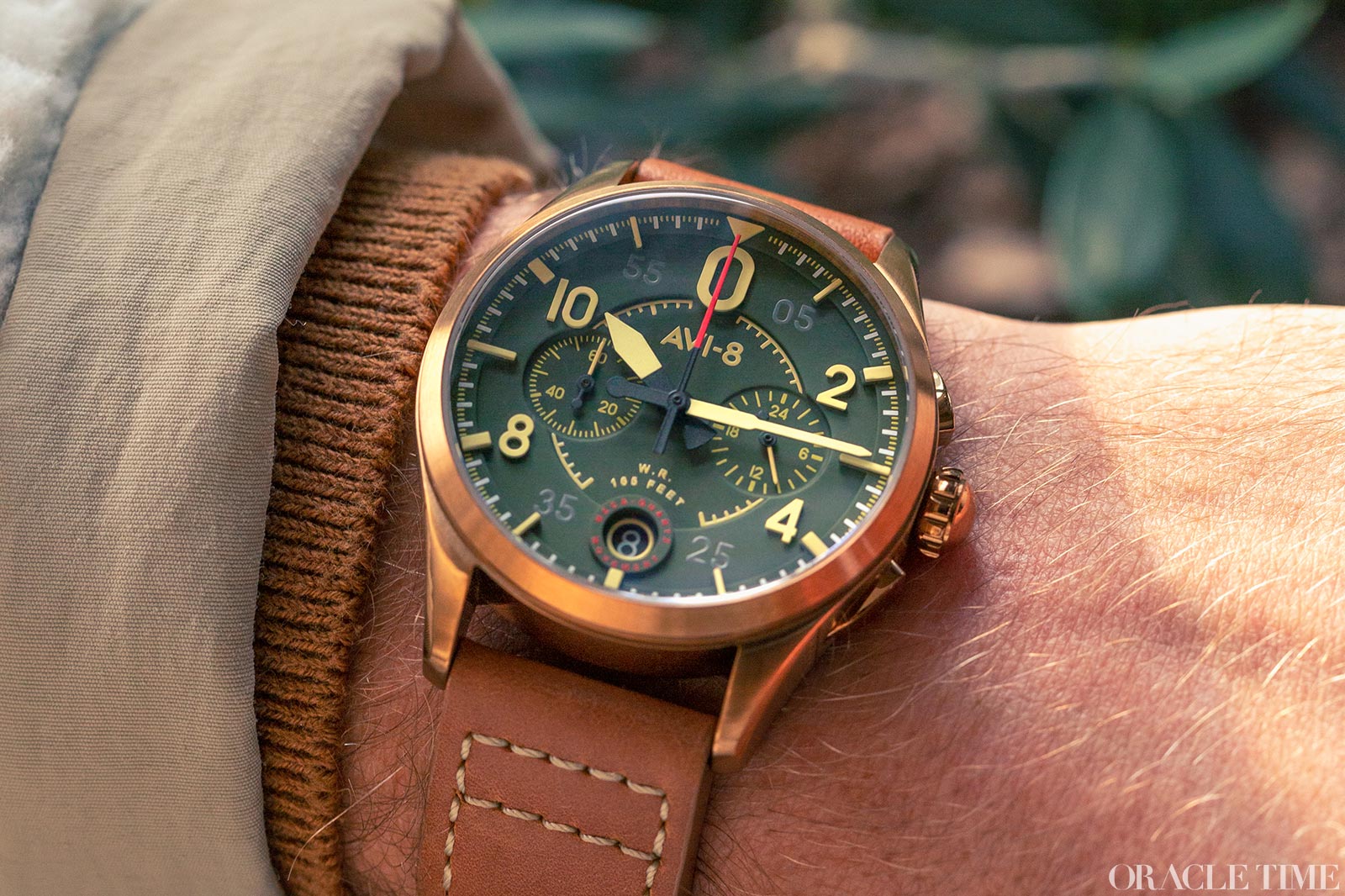 Now, you hear Spitfire, and you hear Pilots and there’s probably one watchmaker that comes to mind: IWC. That’s especially true if you cast your mind back to the Schaffhausen watchmaker’s release slate of 2019, where their super cutting-edge, unique and not-to-be replicated colourway of the year was green and bronze.

Yes, there are some obvious parallels between the IWC and the Avi-8 Spitfire Lock Bronze Green, both from the aviation angle and in the combination of bronze and khaki green. But the former will set you back £6,000; the latter just £215. Comparing the two just isn’t really fair – though it has to be said, the Avi-8 holds up surprisingly well. 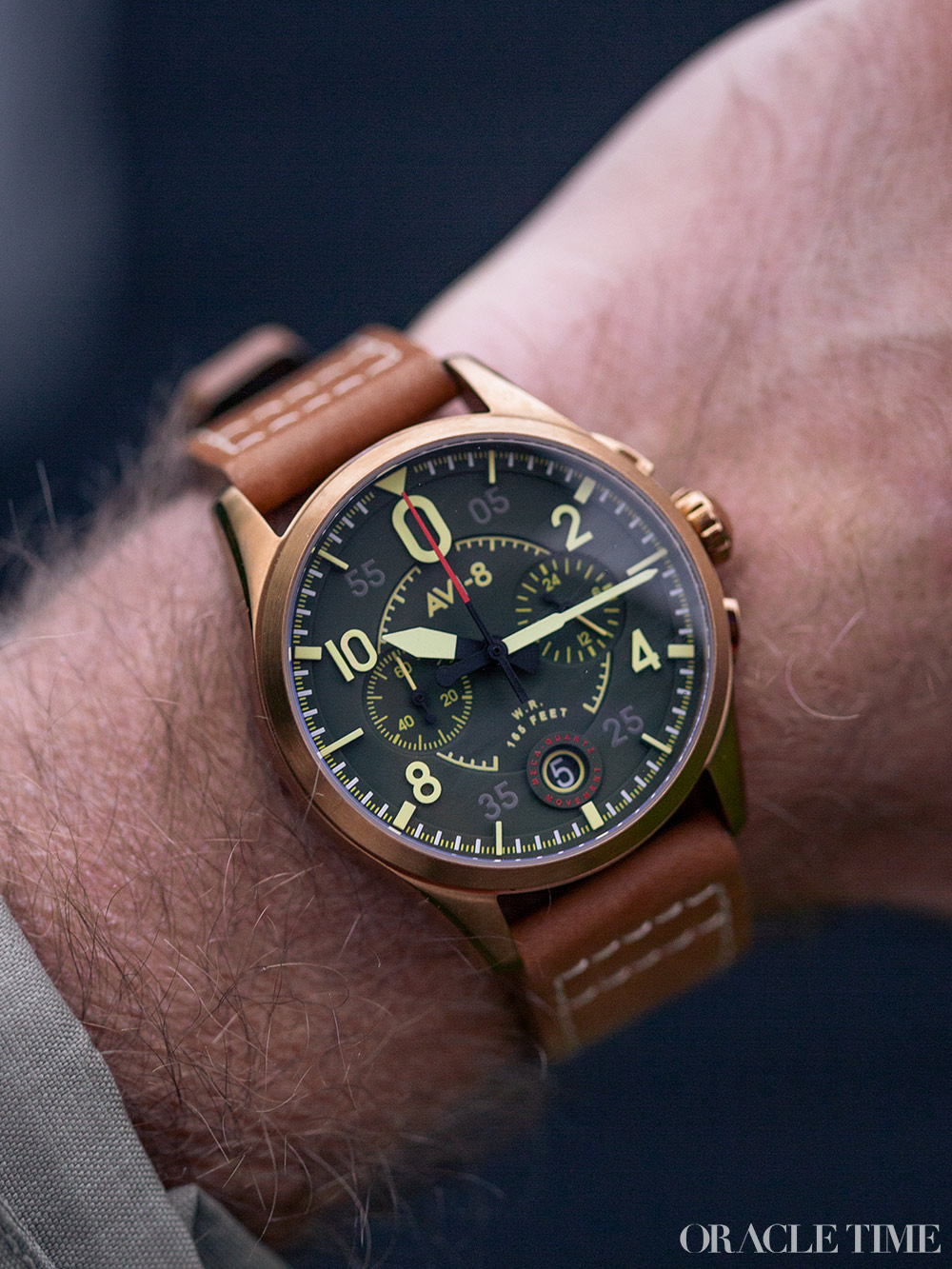 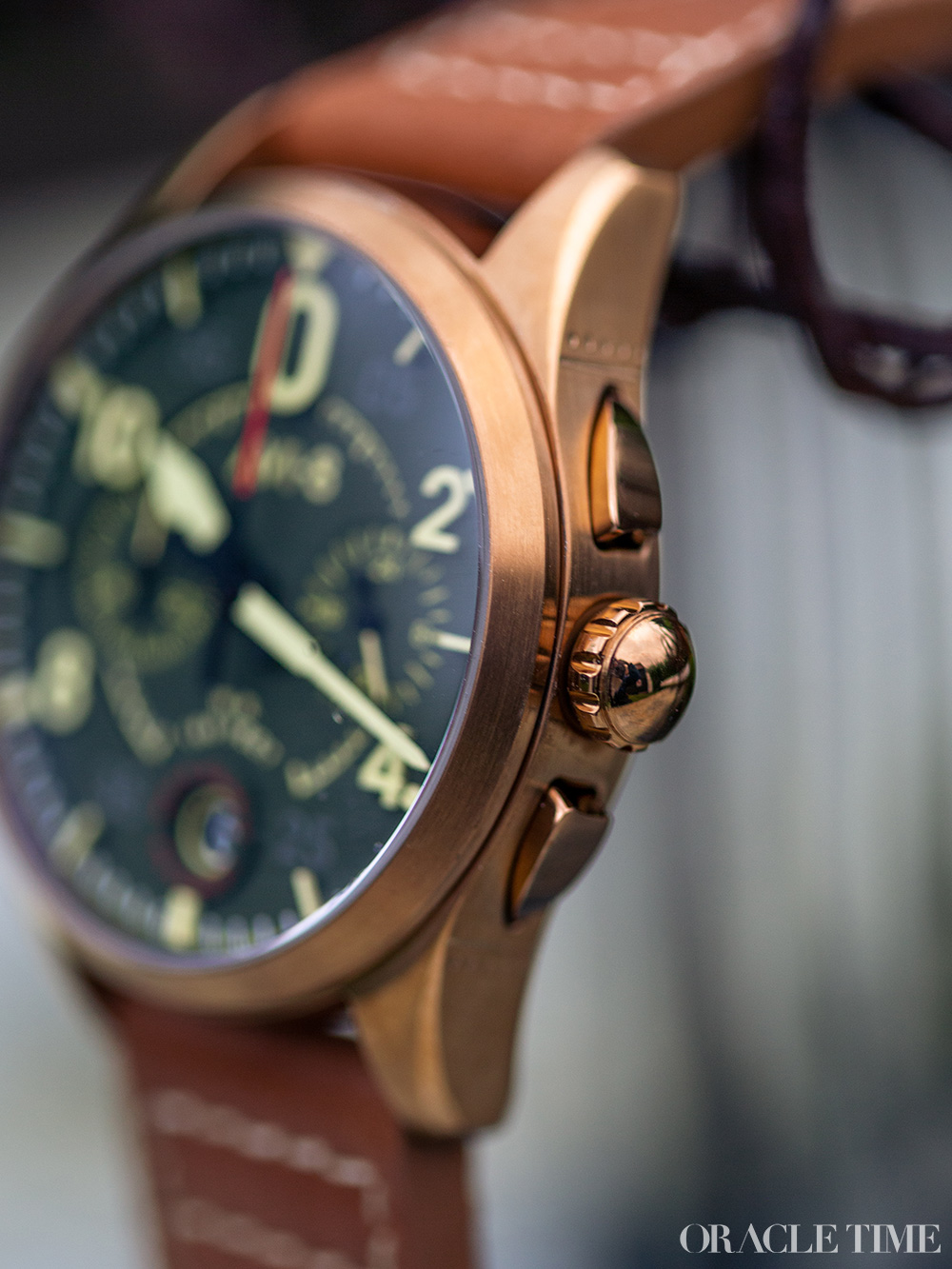 The Spitfire Lock Chronograph takes its name from Eric “Sawn Off” Lock who, despite sounding like a mafia hitman was actually the highest scoring British pilot in the Battle of Britain. It’s not hard to see those inspirations in the watch.

As is par for the course with these kinds of pieces, the dial riffs off Spitfire cockpit gauges, leveraging hands, indexes and numerals aesthetically stripped right out of the vintage aircraft. It’s pretty faithful, even if it’s all been put together in a bi-compax layout you wouldn’t find in any cockpit. It’s also an incredibly layered affair, with raised numerals and indexes, inset subdials, and a date window like a tunnel.

There’s a lot going on and it does make for a relatively busy look. That’s not necessarily a bad thing given the technical nature of the design and influences, and you do get used to it quickly, but it’s not exactly a watch you can pass off as a dress piece. 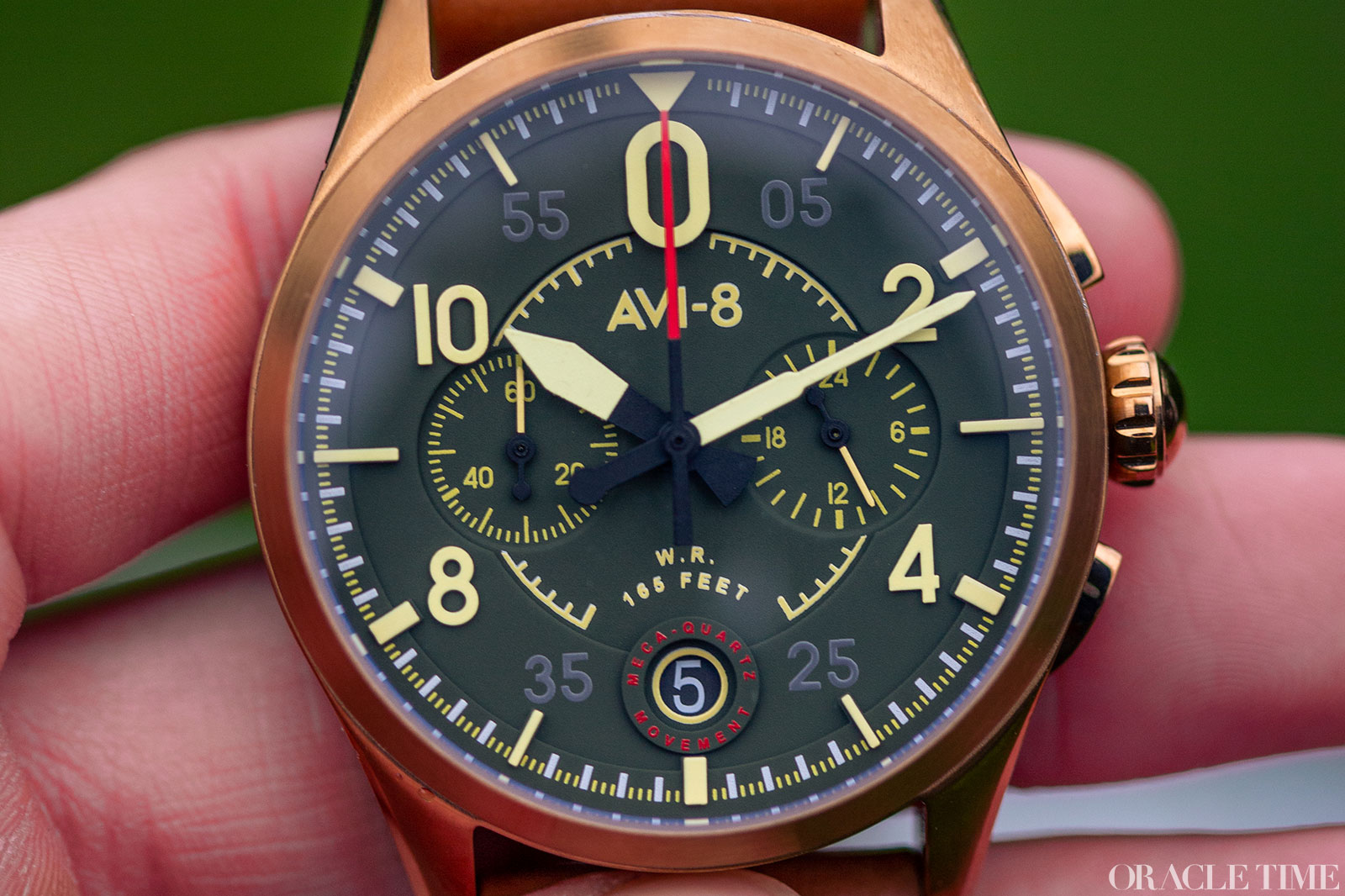 There’s a good reason both IWC and Montblanc leant heavily into the bronze and green mix a couple of years back; it’s a looker. The khaki makes the Avi-8 Spitfire Lock Bronze Green’s military links even more obvious and pairs perfectly with bronze colouring. It is just colouring though, so don’t expect the stainless steel to have quite the same feel as a solid bronze piece.

At 42mm it’s a decent size, enough to read the chronograph without being overly chunky. The pushers do their part to keep things svelte too and are one of the highlights of the piece. Made to imitate Spitfire wings, they’re downright lovely. The crown takes a similarly rounded approach though more for practicality’s sake; you could operate that thing with three pairs of gloves. 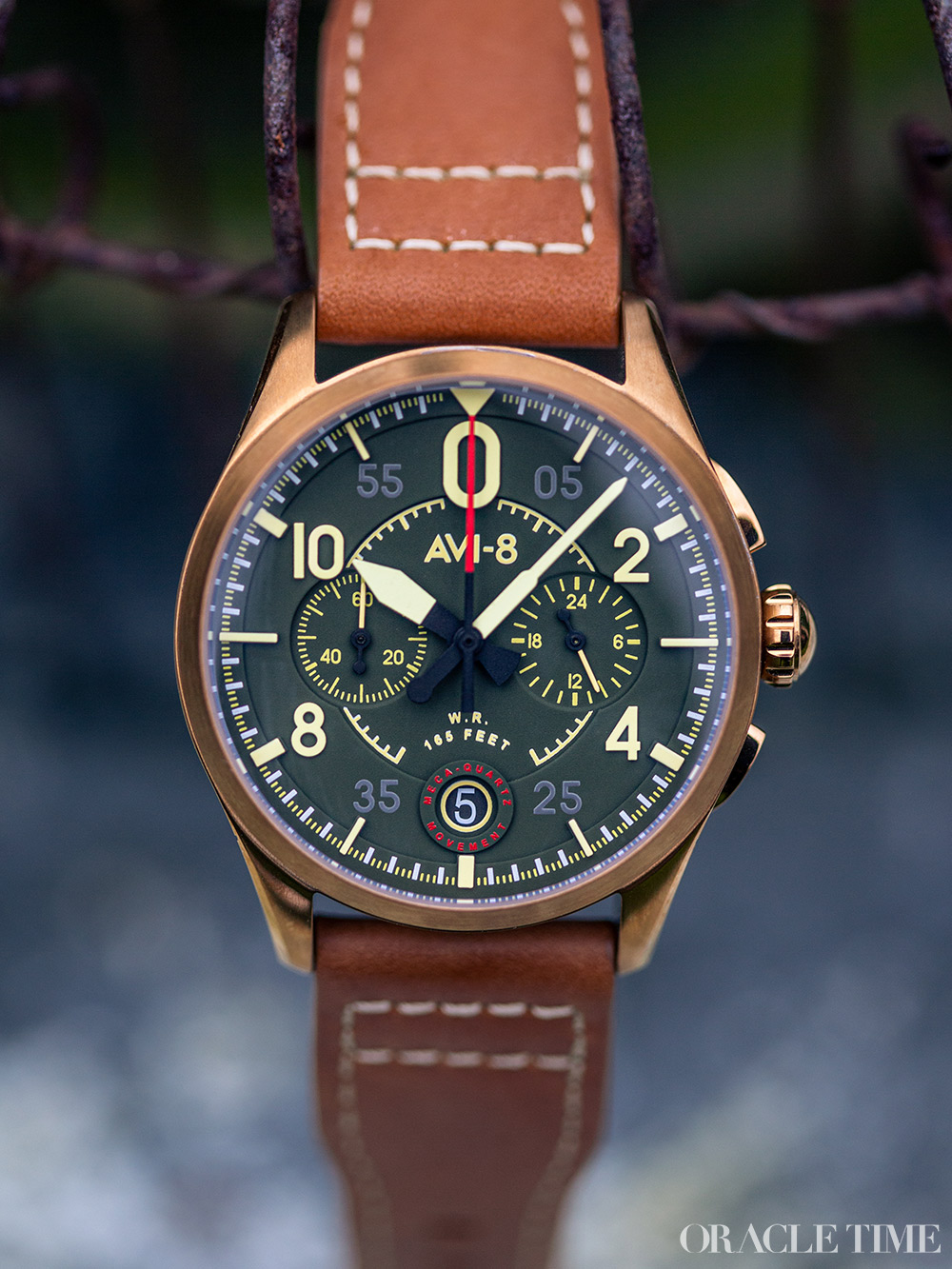 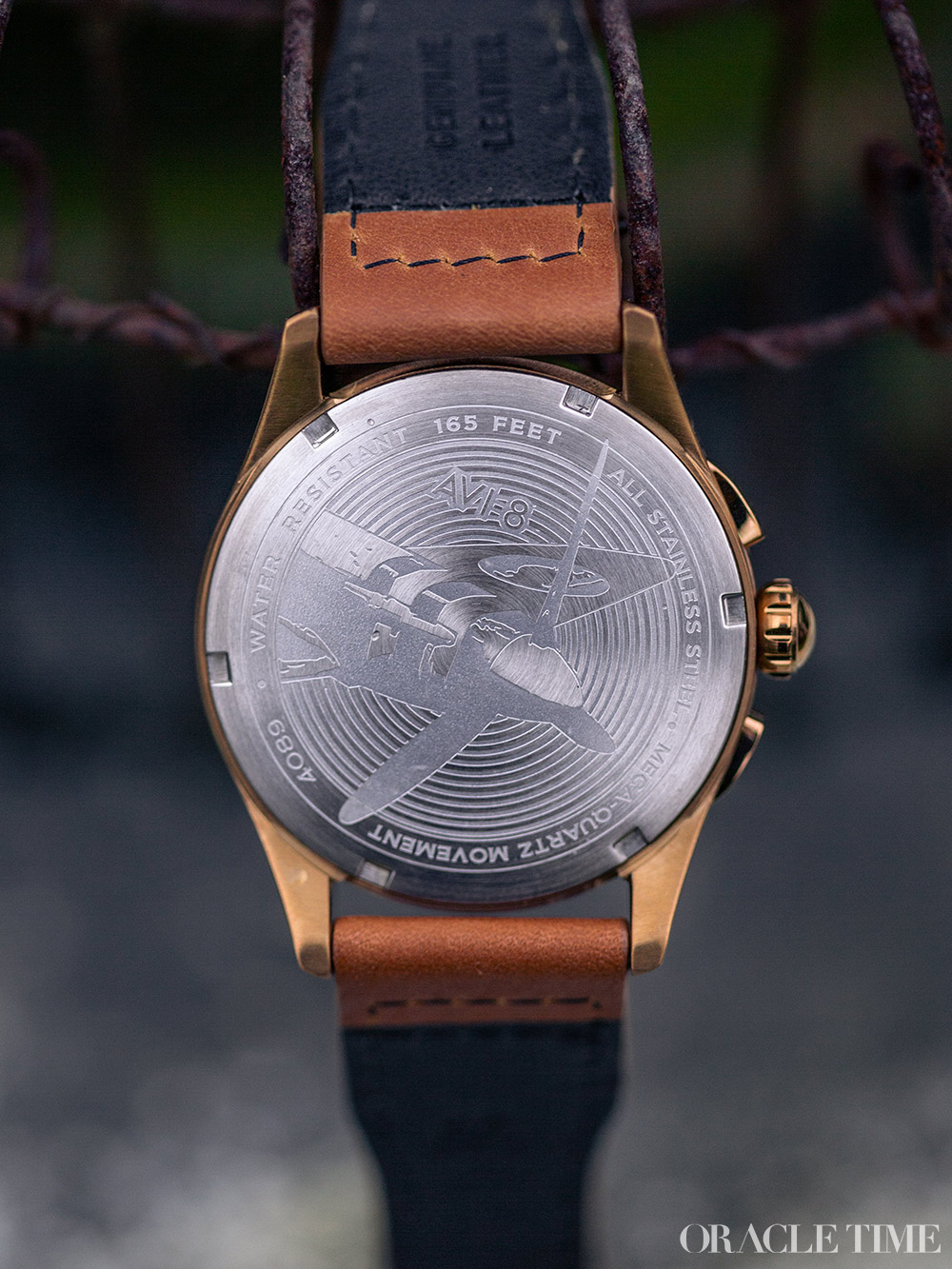 The entire case feels solid and weighty on the wrist, enough that you might be wondering by now why this is such an inexpensive piece. Well, that comes from the fact that it’s quartz. A Japanese meca-quartz of course, a serious bit of battery-powered engineering, but quartz all the same. It still feels like the Avi-8 Spitfire Lock Bronze Green is a serious value proposition, especially as the nature of the movement means it has a flyback reset and 1/5 second readout.

The bottom line is this: if you love your military aviation and can’t afford one of the big guns (or should that be Top Guns?) of the pilots watch world, this is a seriously appealing alternative. It’s less elegant than some, but is clear with its inspirations and offers a lot of watch for the money, quartz or no.