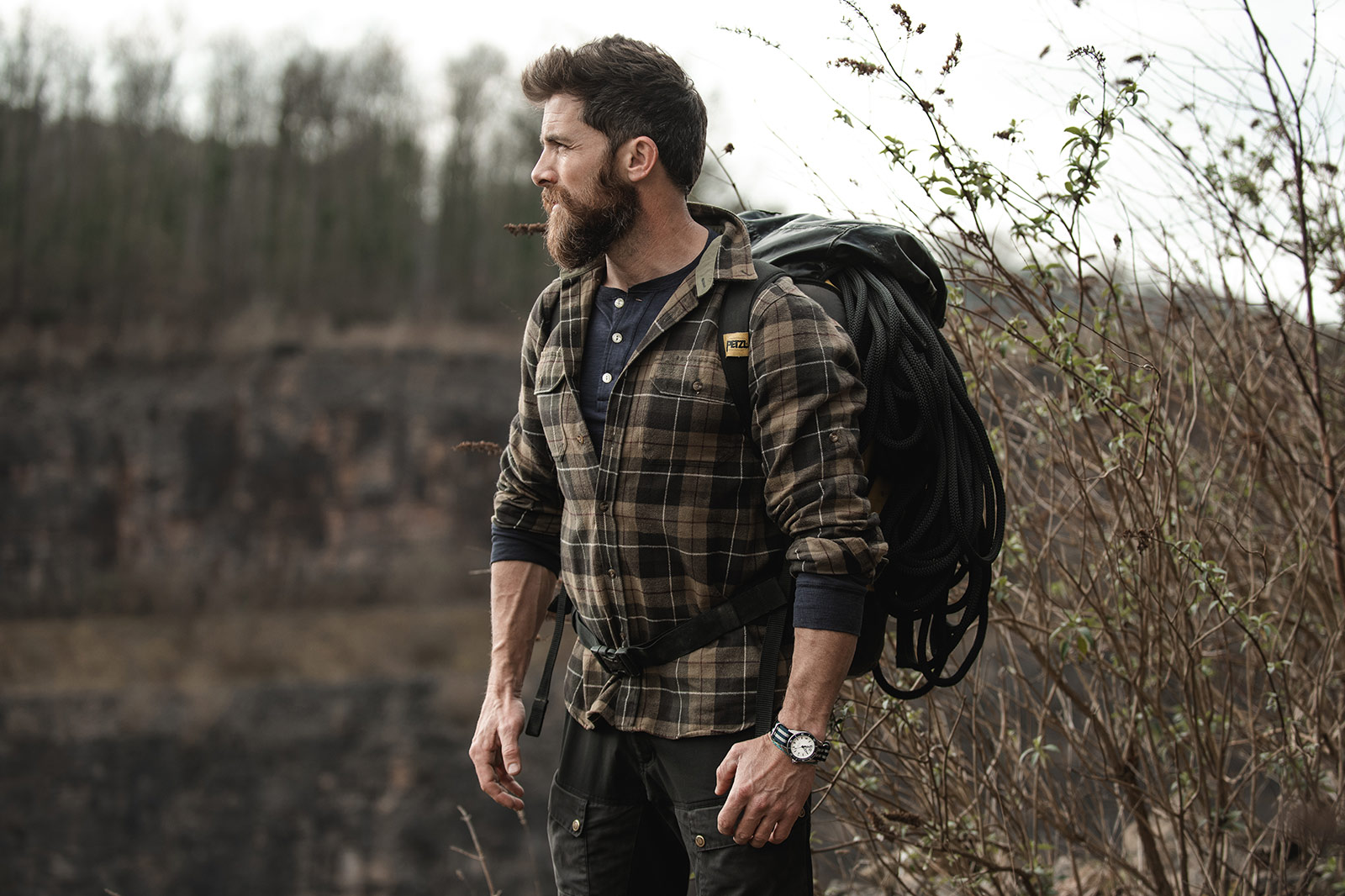 Aldo Kane owns three kilts and, like every good Scotsman, he never wears underpants beneath them. “There’s no excuse for underwear when you’re wearing a kilt. 100%,” he confirms. For this adventurer and documentary-maker, tartan is for formal occasions. Aldo wore a handmade kilt with a tweed jacket for his wedding two years ago. But his profession rarely calls for formal wear. Not so much jacket and tie, as hiking boots, goose down jackets, wetsuits, helmets and climbing harnesses.

While many trades require a specialist uniform, Aldo’s work is so multi-faceted, with so many different specialisms and techniques, that his uniforms number in the dozens. During his career, he has served in Iraq as a Royal Marines sniper, abseiled into the crater of an active volcano, dived deep in the ocean, fended off a charging rhino, avoided drug cartel hit-men, and rowed across the Atlantic from Portugal to Venezuela.

Since he left the Royal Marines in 2003, he has worked as a safety adviser, logistics expert, and occasionally presenter, on ten or so different TV documentaries. The titles reveal the level of danger he regularly faces: Steve Backshall’s Extreme Mountain Challenge, Expedition Volcano, Volcano on Fire, Ed Stafford: First Man Out, Arctic: Frozen Frontier, Mexico: Maya Underworlds. 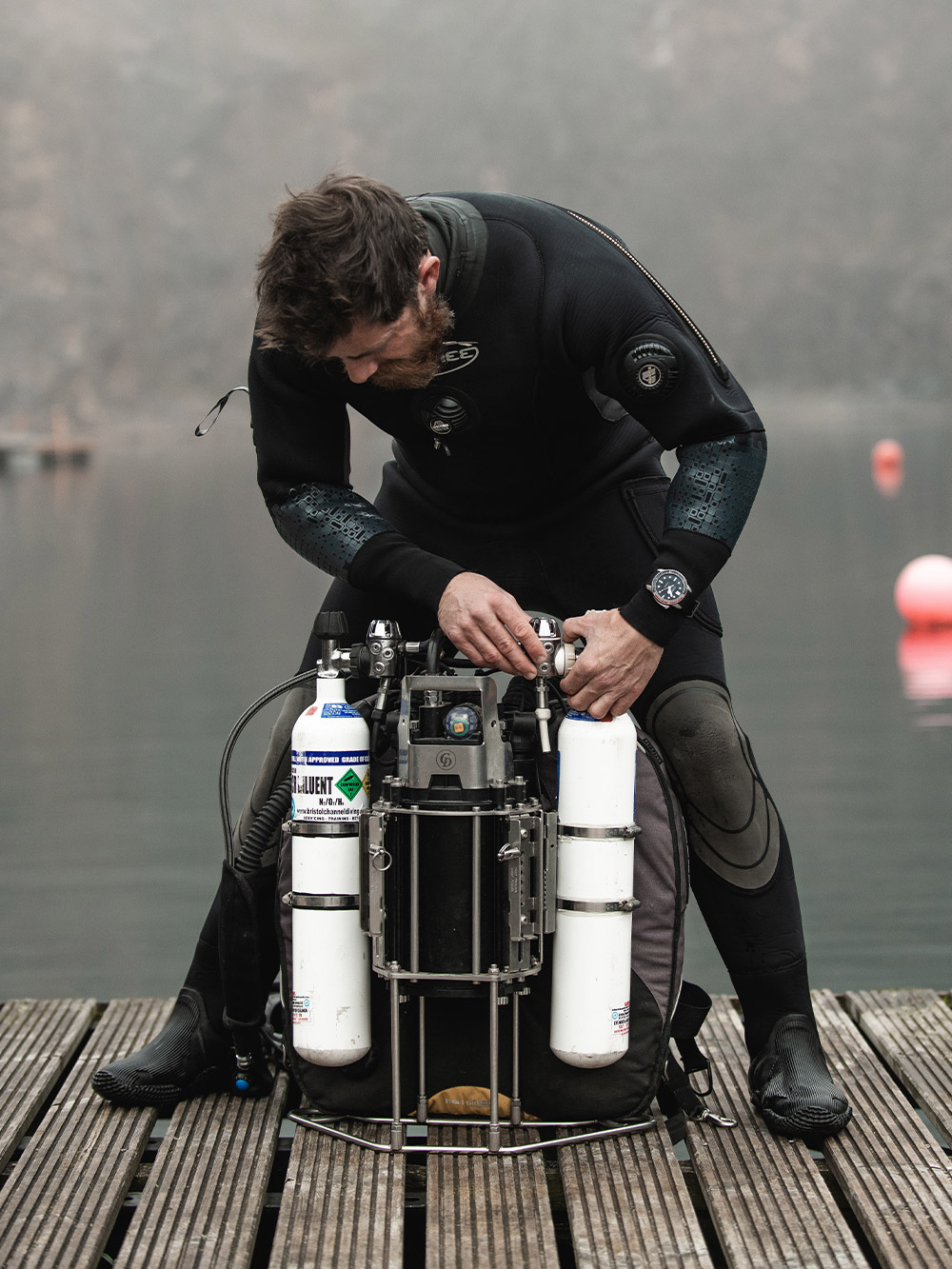 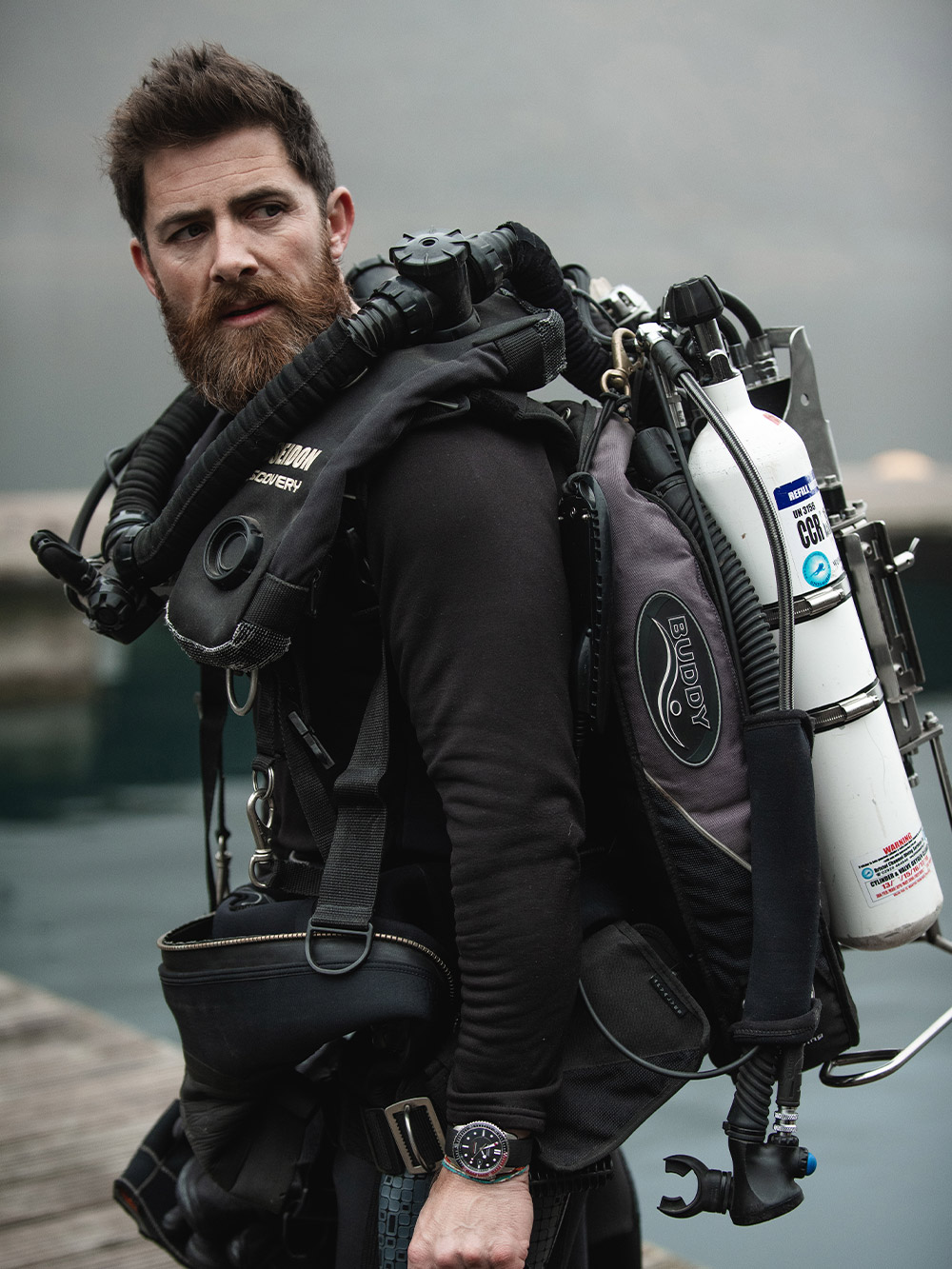 Most recently he returned from the Arctic archipelago of Svalbard, where he was filming a National Geographic documentary. Here, at one point, he found himself diving beneath the ice in seawater temperatures of minus 1.5 degrees Celsius. “That’s as cold as you can physically dive in,” he explains.

The clothing and equipment required for that particular foray was more specialised than ever. With scuba or rebreather equipment on his back, he wore a Fourth Element dry-suit and diving gloves, on top of Canada Goose woolen undergarments. Other equipment included a diving computer, which warns him of his decompression debts and remaining oxygen, plus a Bremont S501 diving watch. You’ll also see him wearing Bremont’s S300 and S2000 divers and when he’s not beneath the waves, he prefers a Bremont MBIII watch. 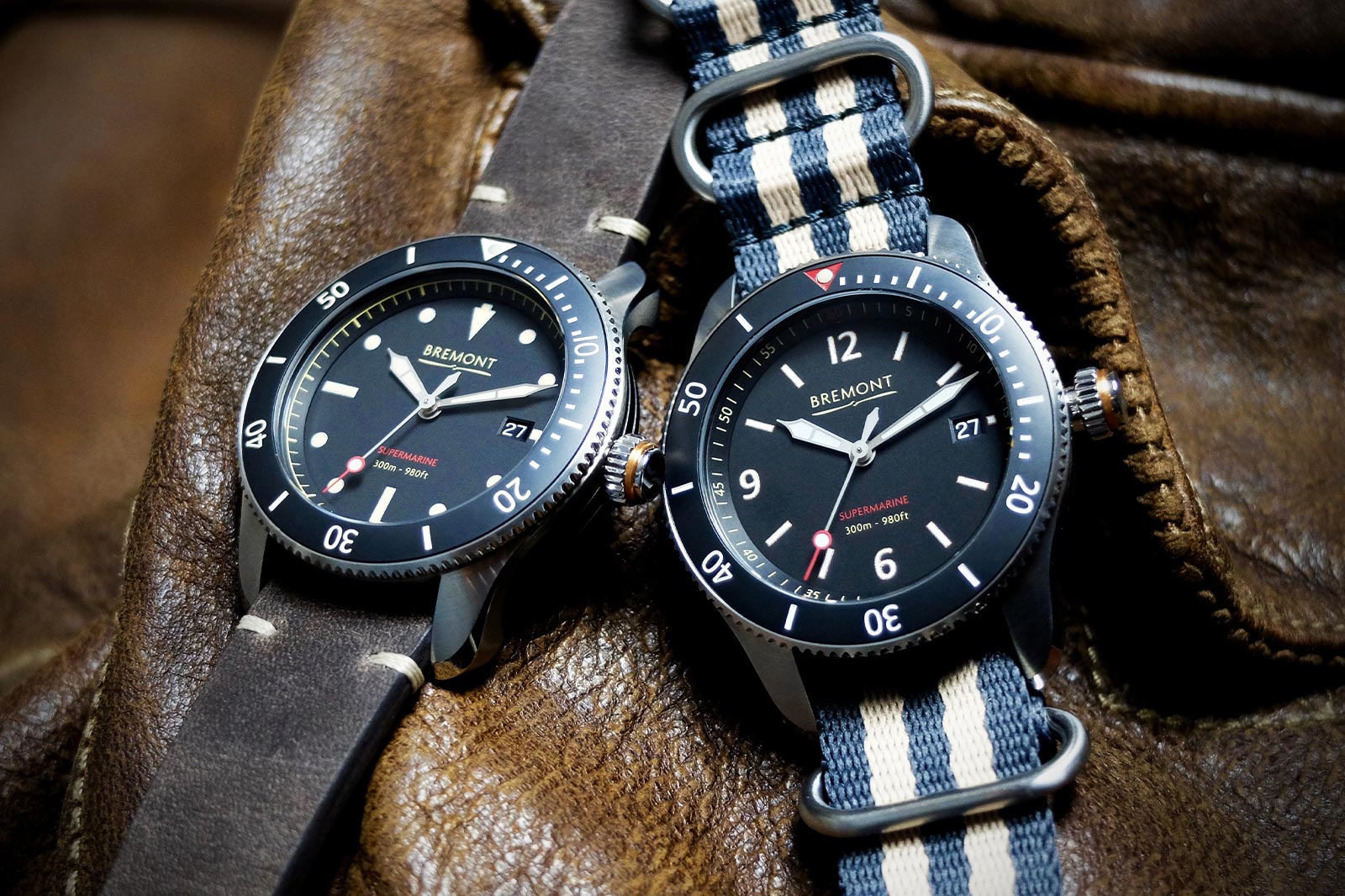 Given the range of hostile environments Aldo operates in, his wardrobe at home consists of a jumble of hard-core expedition equipment. “Bombproof” is how he describes much of it. “Before an expedition, I ask myself: ‘Is it going to be freezing cold; sandy and warm; wet and dark inside a cave?’,” he says. “That allows me to work out my expedition basics.” 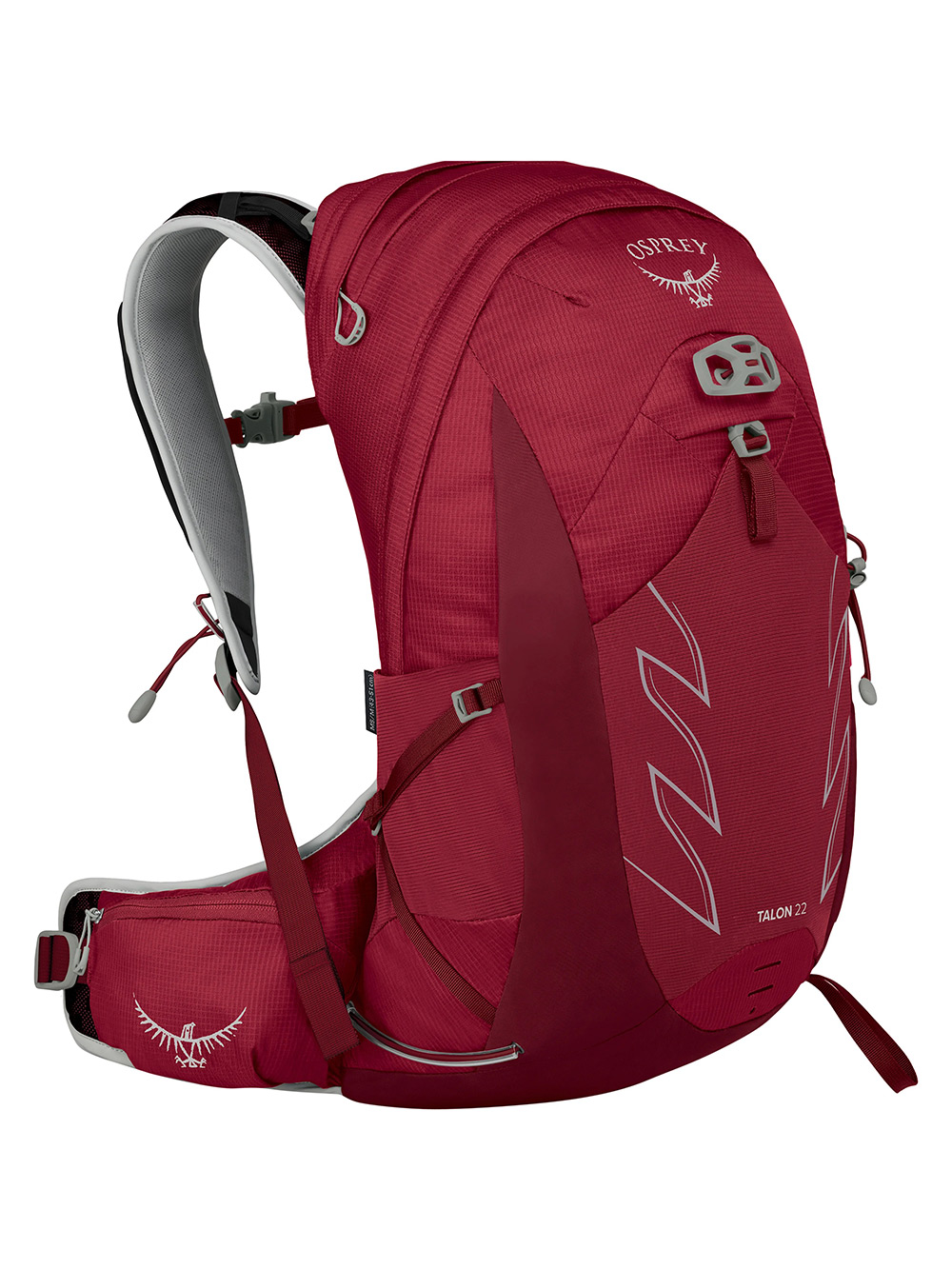 For climbing trips there are ropes and harnesses; for sleeping in the jungle there’s a Hennessy hammock; the tents and sleeping bags are Mountain Hardware; the expedition rucksacks are Osprey. For eating and drinking in the wild, he finds certain items indispensable. He always carries a Yeti cup, an MSR coffee filter, and what he calls a “racing spoon”.

“That’s Royal Marines slang for a spoon with a long handle that you can wolf down your food with. It means you can get into the bottom of your boil-in-the bag without getting your hands covered in spaghetti bolognese.” 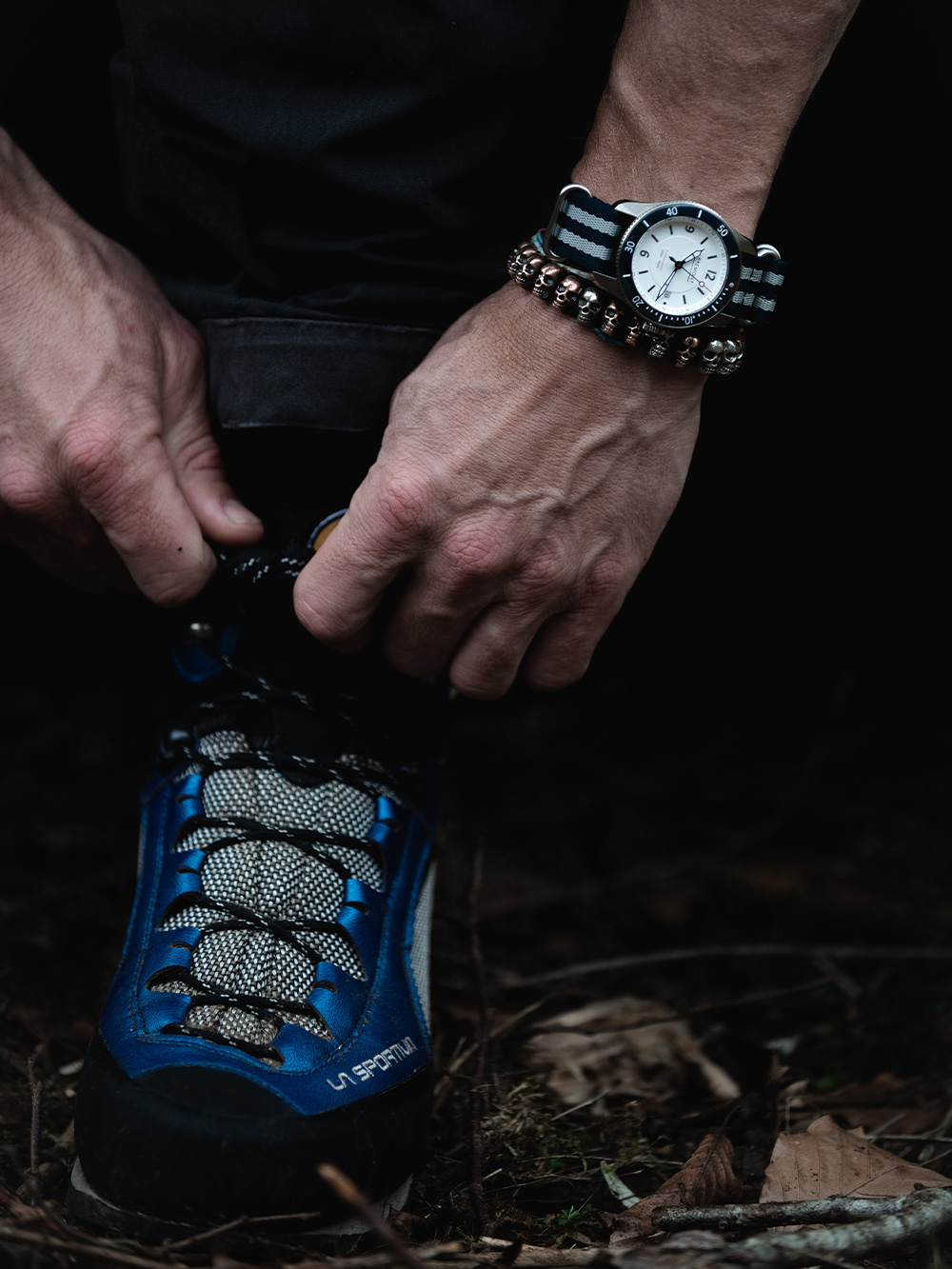 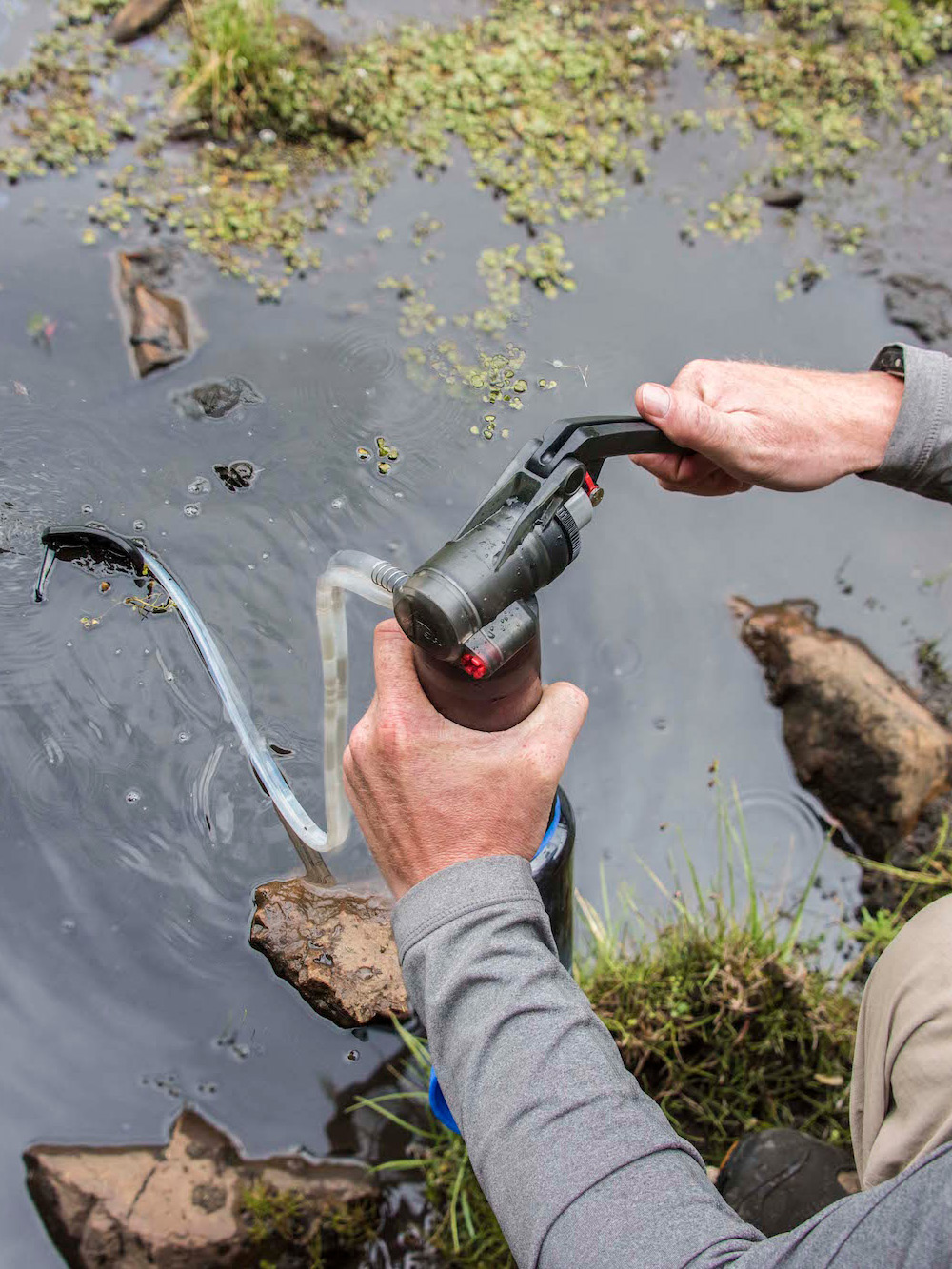 Aldo and his fellow documentary makers wouldn’t last long without clean drinking water. The solution is an MSR Guardian water purifier. “Filming in Surinam with Steve Backshall, we used it for six weeks, pumping river water through it. It’s expensive, but one of the best I’ve ever used. It’s effective against bacteria, particulates and some viruses. Having fresh water is an imperative.”

Hardwearing clothing is vital, too. For boots and climbing shoes, Aldo normally sports an Italian brand called La Sportiva. In the jungle he needs footwear that’s extra waterproof and opts for jungle boots from British brand Altberg. In the coldest environments (“In Siberia it can drop to minus 55 Celsius”) he wears triple-insulated boots.

“However cold it gets, I never wear two pairs of socks,” he adds. “It doesn’t make your feet warmer. Much better to get a good fitting pair of boots with one sock which allows blood to circulate.” 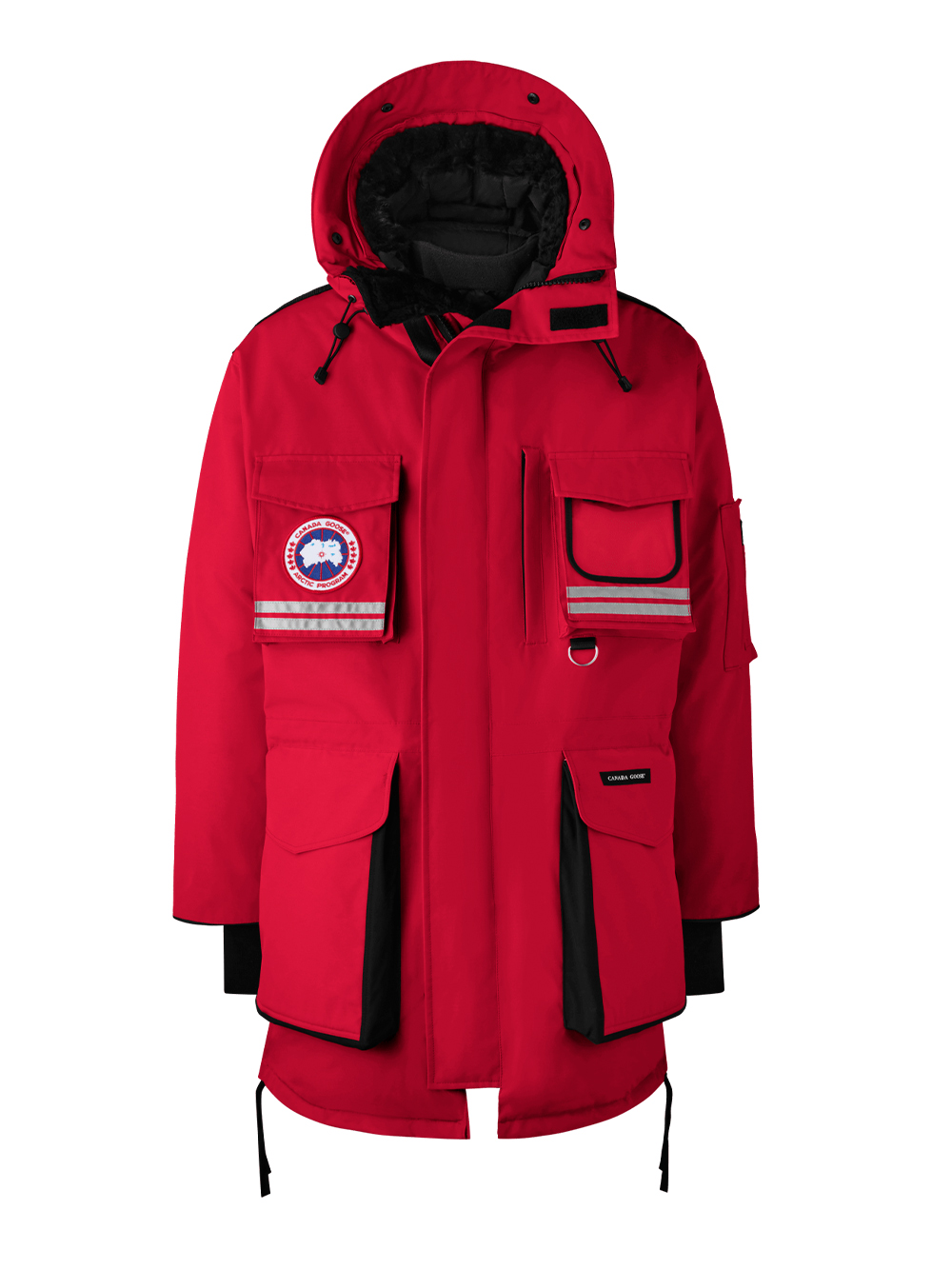 Extreme cold also requires an extreme jacket in the form of a Canada Goose Snow Mantra. For trousers he wears Fjallraven. In warm weather he’ll wear Vollebak Planet Earth shirts, in colder weather he needs merino wool Canada Goose base layers. “I can wear my wool boxer shorts and under-layers for up to ten days and they never stink,” he says reassuringly.

If the world is divided into those who live like lambs and those who live like lions, then Aldo falls firmly into the latter category. Claws, teeth, mane… the lot. His life story – much of which, incidentally, he recounts in his new book Lessons From The Edge – reads like an old-fashioned Boys’ Own adventure. Born in 1977 in the north Ayrshire town of Kilwinning to paramedic parents, he grew up alongside four other siblings, including his twin brother Ross. At the tender age of 16 he joined the Royal Marines. Thrown in at the deep end, he recalls his arrival at the Commando training centre in Lympstone, in Devon. “It was the first time I’d left home to do anything, and I remember getting off at the train station, thinking ‘What the hell have I done?’ The drill commander, with his stick, would just whack you in the balls.” 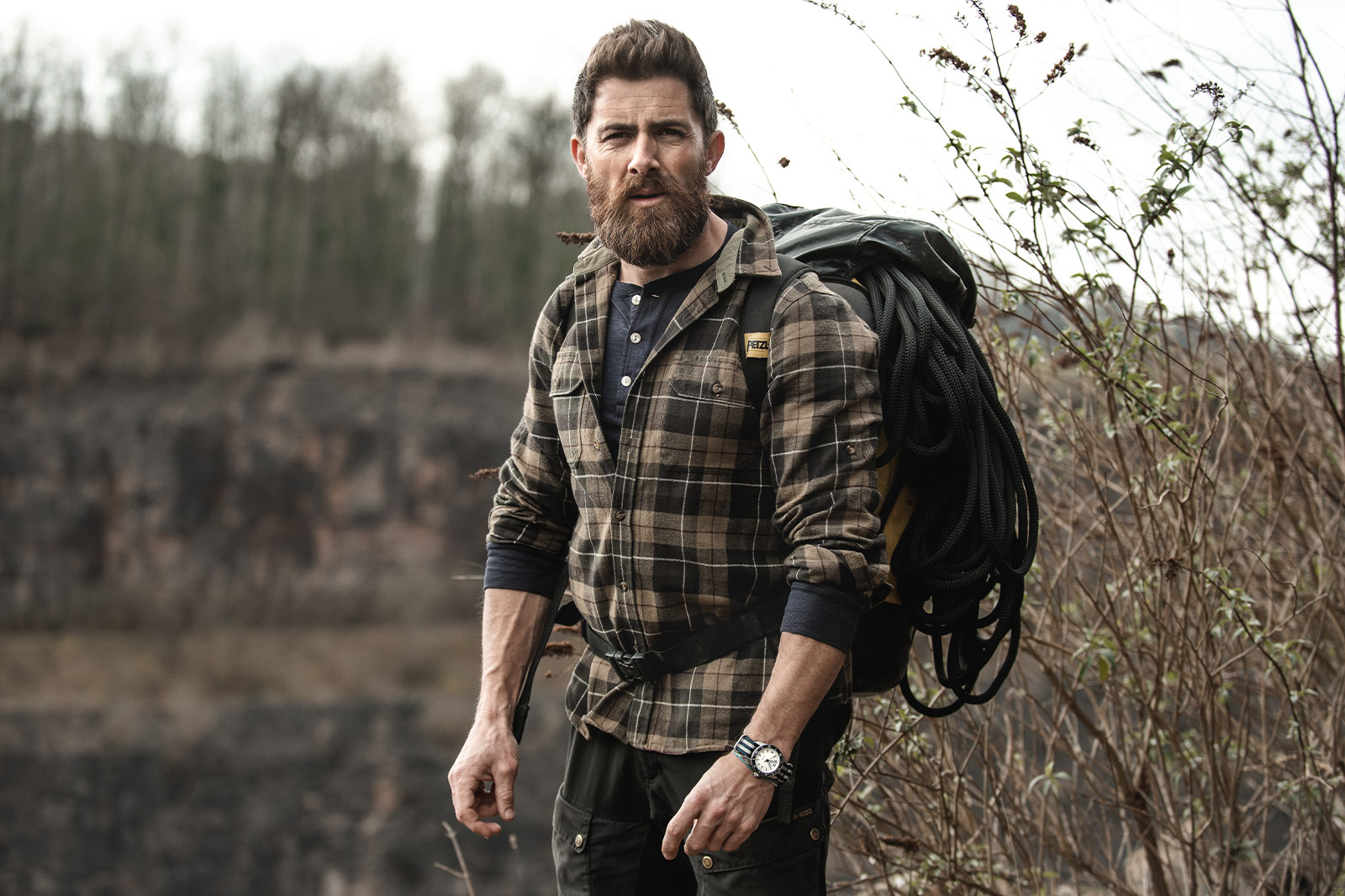 By 19 years old, he had trained as a sniper, serving first in Northern Ireland in the mid-1990s with 40 Commando, then in Iraq in 2003 with 42 Commando. Pressed on what life was like seen through the sights of a high-velocity rifle, he brushes over the thorny question of shooting enemy combatants. “Going to war, that’s pretty much what’s on the cards but not something that anyone wants to do,”.

Fear was a constant companion. “I remember not being able to sleep the night before I flew into battle,” he once wrote. “My mind raced, I could barely hold my hands straight and my stomach was in knots, but as anyone who has been to the front line will tell you, this is the excitement kicking in. What really makes you perform under extreme stress is how that excitement is used.”

Eventually Aldo faced the tricky transition back to civilian life. Floundering between several dissatisfying jobs, and constantly broke, it was a spell selling gas and electricity door to door that was the final straw. He remembers a customer slamming the front door in his face for the umpteenth time, when suddenly he lost the plot. Throwing his clipboard to the floor in disgust, he stripped off his uniform in the unimpressed customer’s driveway, and stormed off in a huff, wearing just his underwear. Some uniforms don’t suit this man, it seems. 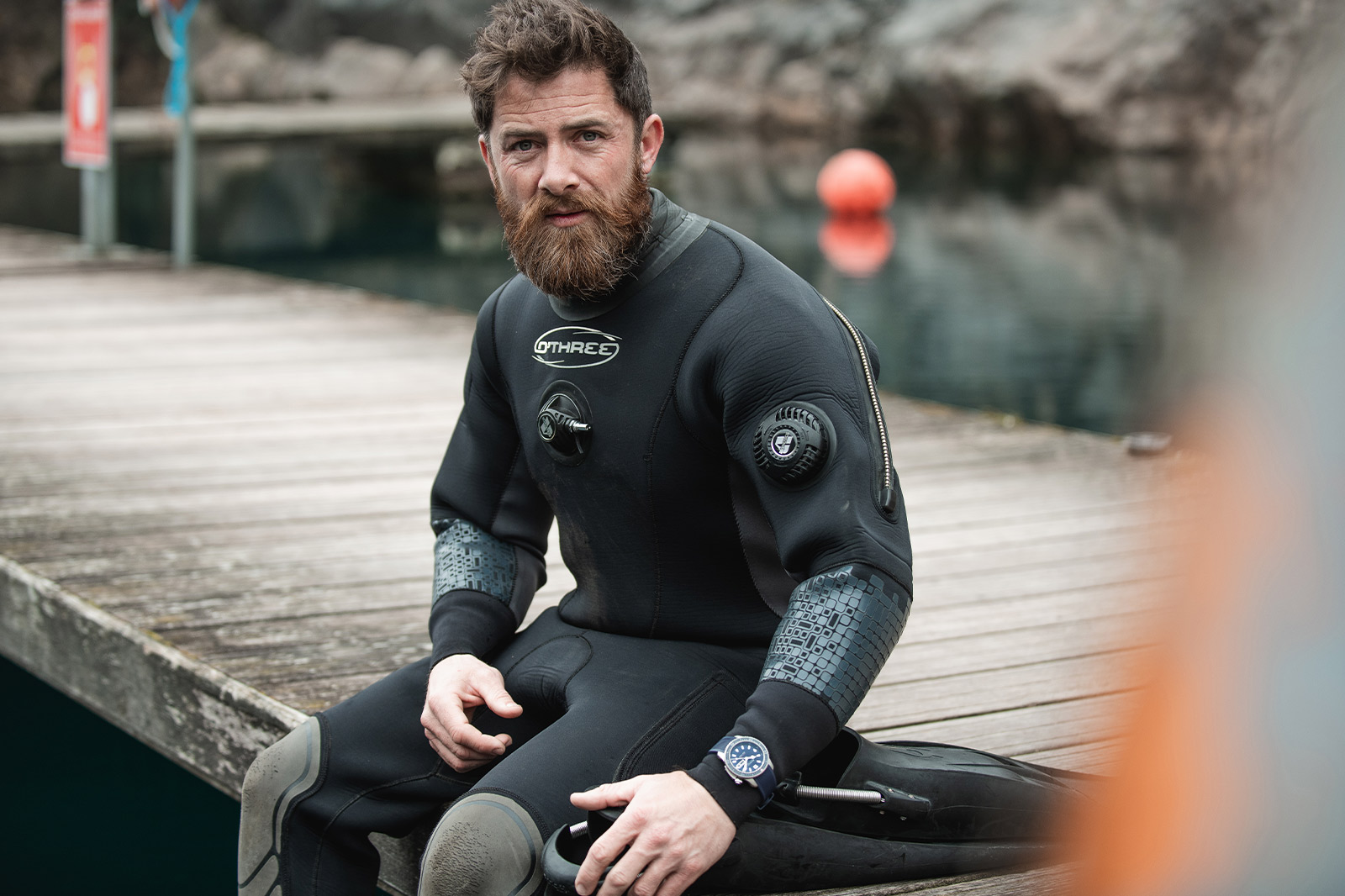 It was as a climbing rope specialist that Aldo made his first foray into documentaries. In the early 2010s, he abseiled down into the crater of an active volcano in the Congo called Mount Nyiragongo. “I got all the way down to within 100 metres of the biggest lava lake on Earth,” he remembers. “The last 80 metres was one of the sketchiest abseils I’d ever done.”

Despite having gas monitors, the levels of carbon dioxide near the crater floor were off the scale, and he worried he’d pass out with no chance of climbing back up. “I started telling myself all the things that could go wrong. You don’t need rescuing from there because there is no option for rescue.”

Over the years, there have been many other brushes with death. The three times he and his team capsized while rowing across the Atlantic, for example. Or the rock fall that narrowly missed crushing him while climbing in Oman. Or the car crash in Mexico where a mass of steel slid off the roof of the vehicle behind, slamming through his rear windscreen, just inches from his head. 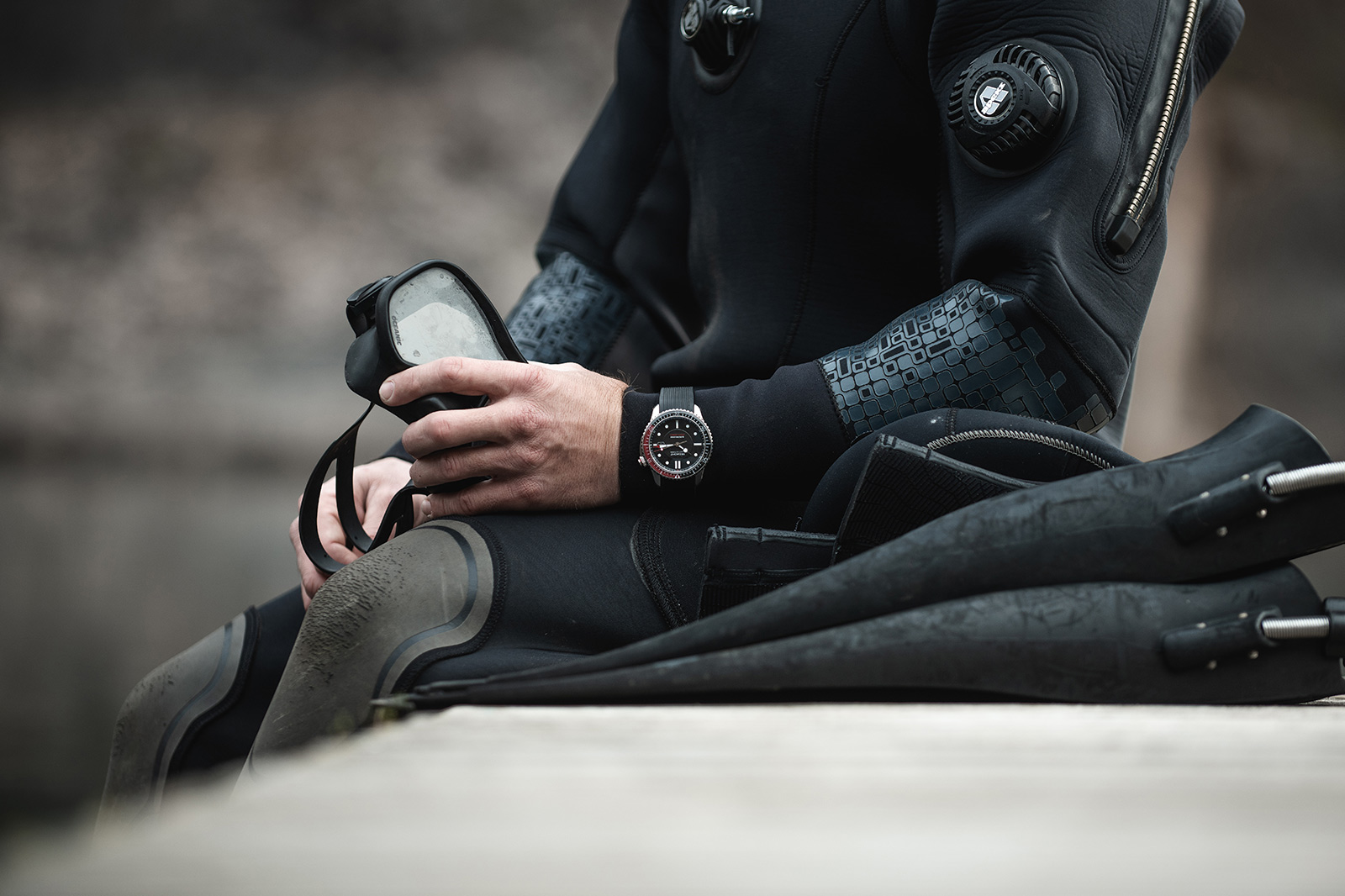 A year ago, this adventurer became a father for the first time. Typically, he was away on one of his expeditions when his wife Anna gave birth back home in the UK. Committed to filming in the waters off the Dominican Republic, he had to witness his son Atlas’s arrival into the world via a Whatsapp video call from his ship. “That morning I’d been diving with humpback whales.”

Aldo, Anna and Atlas now live in Bristol. It’s a place where all that specialist clothing tends to be rather redundant. “I don’t need to come back home and hang around in expedition kit,” he says, realising how ridiculous that would look. “I do one of the most masculine, alpha-male jobs on the planet, but I don’t shout and bang a drum about it.”

So, what does this new dad wear when he’s off duty? “I’m a jeans, Vans trainers and T-shirt kind of guy,” he says, happy to describe his look as “standard Dad clothing”. And, on the rare occasions he’s required to dress up, one of the three kilts might come out of the wardrobe. But no underpants, naturally.

Dominic Bliss is a London-based journalist, specialising in long-form feature writing for the likes of National Geographic, Men’s Health and GQ. His late grandfather once owned a beautiful antique Jaeger-LeCoultre watch, an heirloom which sadly ended up on the wrist of another member of the family. On his latest exhibition the South African explorer and Panerai Ambassador discovered climate...