A Beginner’s Guide to Every Patek Philippe Model - Oracle Time 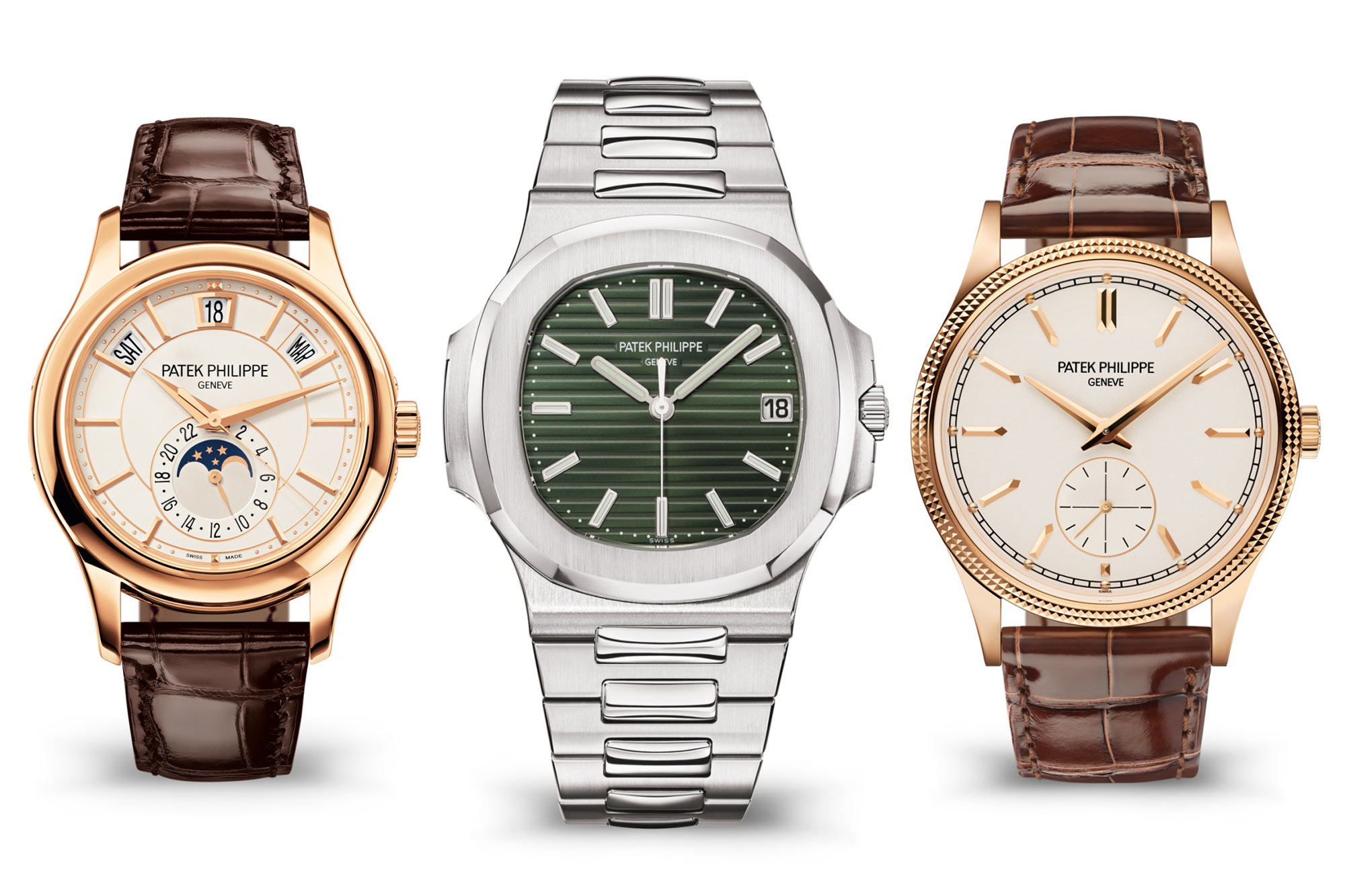 If you’re new to watches, which would make sense as you’ve clicked on this beginner’s guide, Patek Philippe is probably one of the brands you’re less familiar with than say Rolex or Omega. However, you should get to know them because they’re one of the holy trinity of watchmaking alongside Vacheron Constantin and Audemars Piguet.

With watches like the Nautilus, and Calatrava in their wheelhouse, they produce a higher proportion of ‘grail’ watches than almost any other watchmaker – highly sought after watches that earn pride of place in any collector’s collection. Not to mention their annual Grand Complication timepieces. With that being said, let’s get this beginner’s guide to every Patek Philippe model in their current range underway. 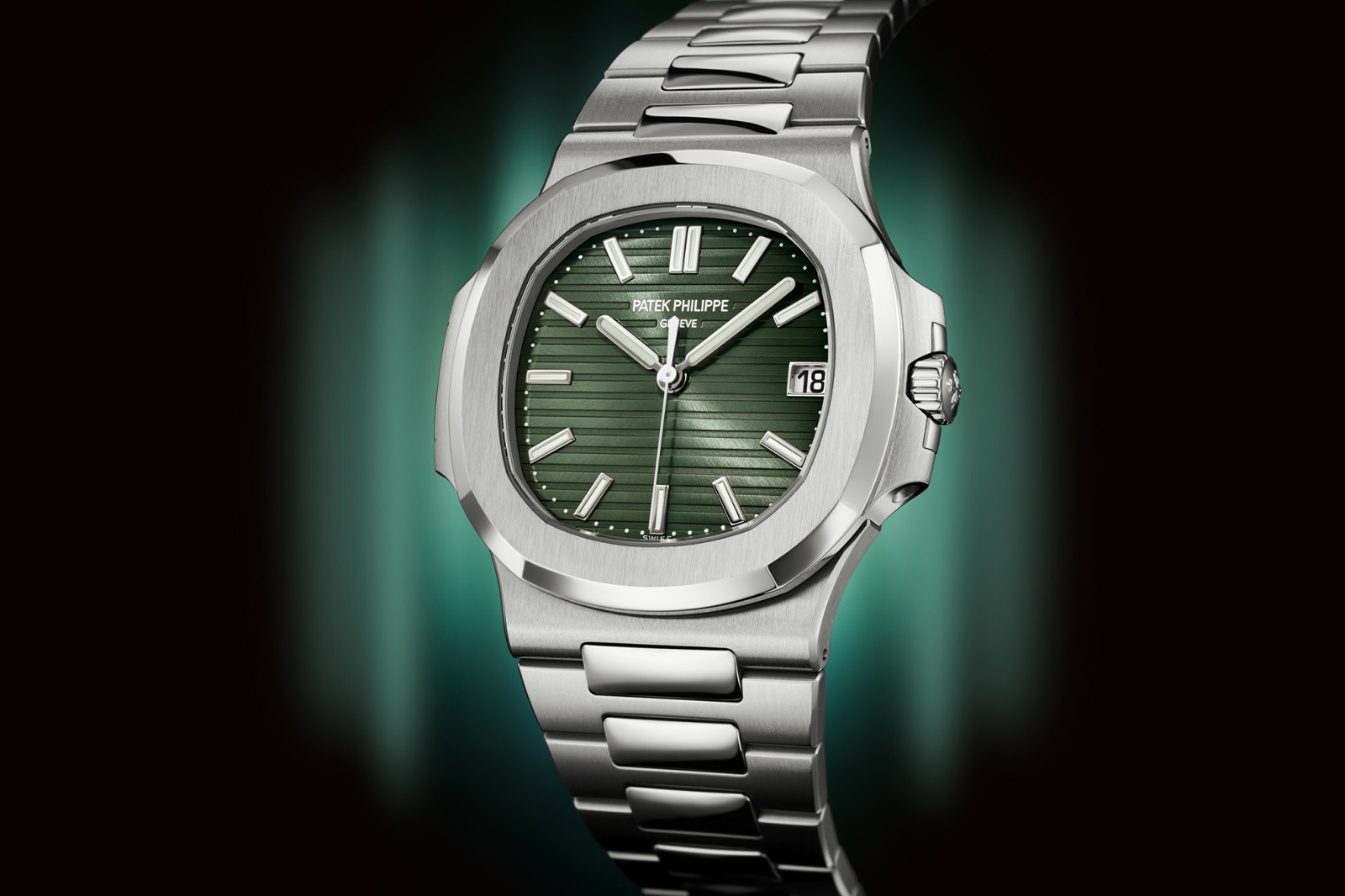 Bow to the king. The Patek Philippe Nautilus is the premier sports-luxe watch, standing on a pedestal high above its competition. It’s instantly recognisable for its rounded-octagonal case and porthole bezel, which give it a strong profile and unique silhouette. Equally iconic is the dial, horizontally embossed for a sporty yet refined texture that suits rustic simplicity and over-the-top embellishment just as well.

There are numerous references of Nautili in the line-up from gold and diamond dress watches to perhaps the most famous Ref. 5711 – which has now been discontinued – a plain dial version in stainless steel. The discontinued status of the 5711 makes it even more exclusive and sought after than before. Particularly hyped is the 5711’s swan song, the green dialled ref. 5711/1A-014. The 5712 is the closest comparable model still in production. 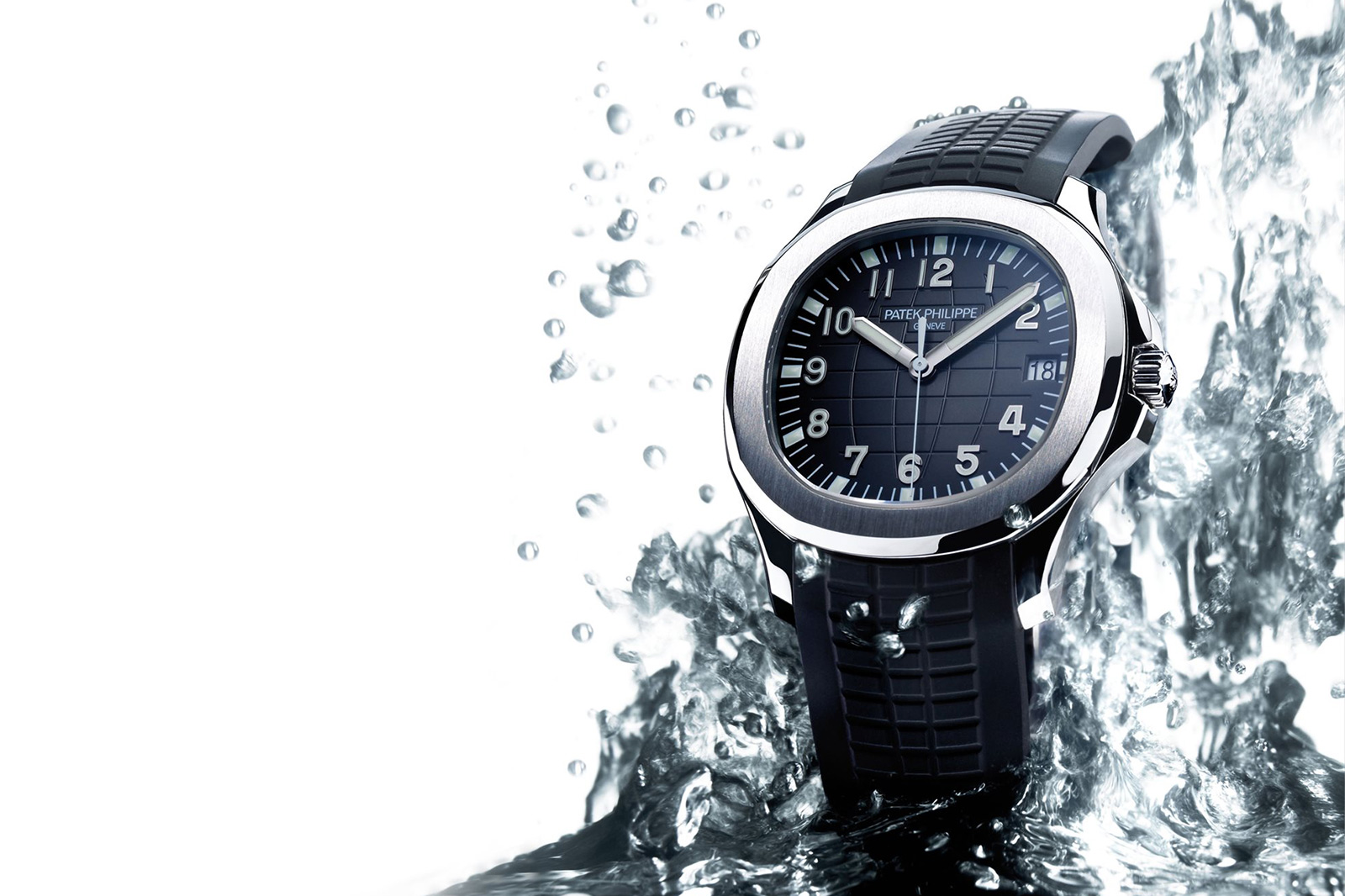 The Nautilus’ younger sibling is the Aquanaut, which has the same sports-luxe aspiration but at a more accessible price-point. Even rock and roll royalty, ahem Paul McCartney, can wear an Aquanaut without bemoaning the fact it isn’t a Nautilus.

It has a similar overall case design but the dial is markedly different, eschewing the horizontal embossing for a grid shape that’s evocative of lines of longitude and latitude. Once again there are multiple dial colours and functions available, but we take our guidance from McCartney who opts for the black and steel 5167.

Housed inside McCartney’s is the Patek Philippe in-house Calibre 324 S C, an automatic movement with a 45-hour power reserve. Other Aquanauts house a range of movements including GMT variations and quartz pieces, and even those are exceptional by most standards. 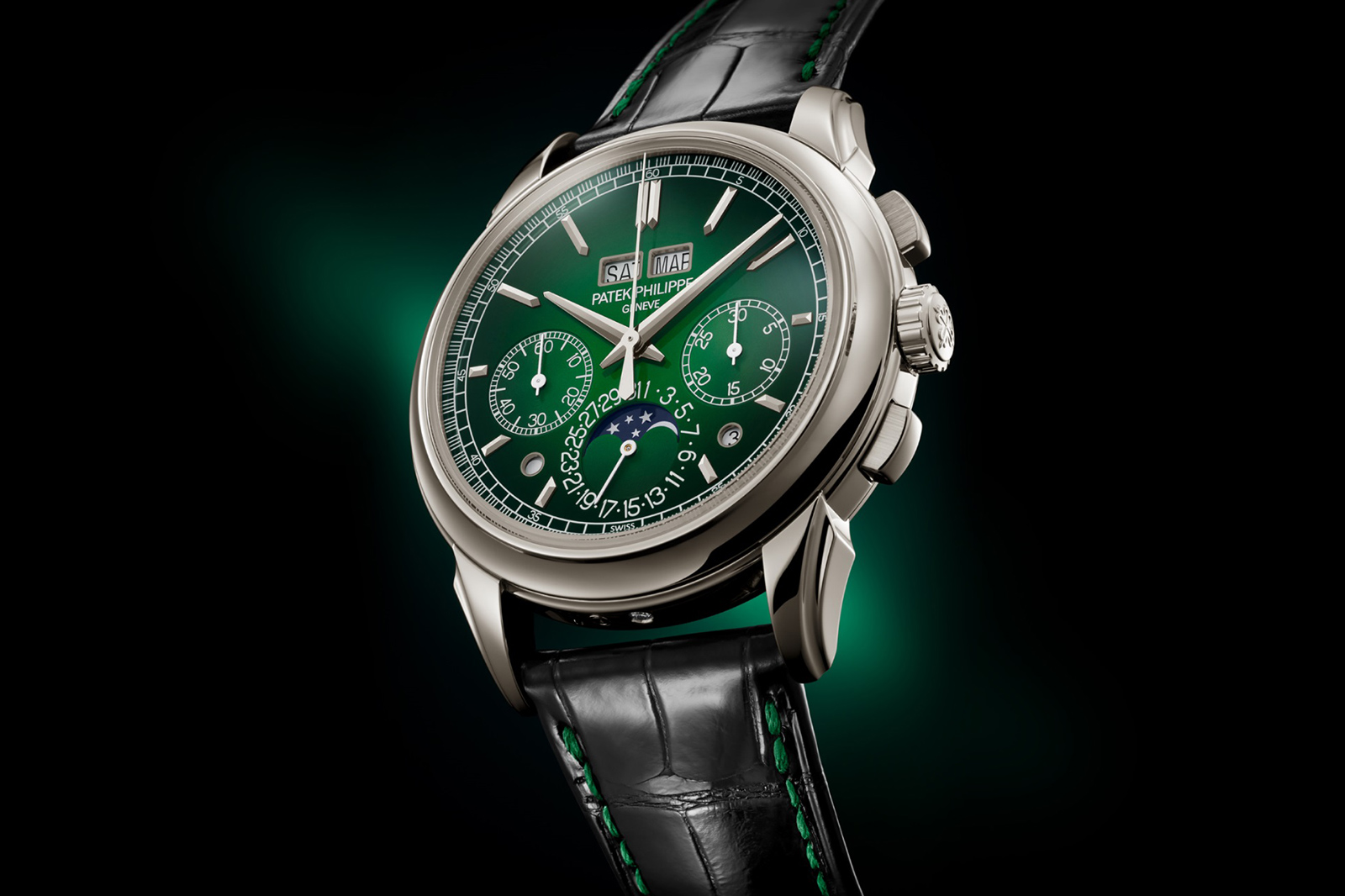 The term ‘haute horology’ or ‘high watchmaking’ gets thrown around a lot, to the extent that you’re probably as likely to hear it applied to a £100 quartz watch as a £100,000 watch with a handcrafted movement and insane finishing. However, if any timepiece deserves the description it’s the Grand Complication. Patek’s most precise and complex range that they expand with a single watch each year. As such, they are some of the most anticipated releases that we see, fusing exclusivity with genuinely insane levels of watchmaking technology.

Every year yields a slightly different watch with various complications and materials and colours so picking one model to symbolise the whole range for this guide is a fruitless endeavour. As such, we’ve highlighted the Perpetual Calendar, which is one of the most prestigious complications in watchmaking – a full date calendar that won’t need adjusting for a hundred years. But there are also Grand Complications that feature chronographs, tourbillons and more, the variety and ingenuity is endless. 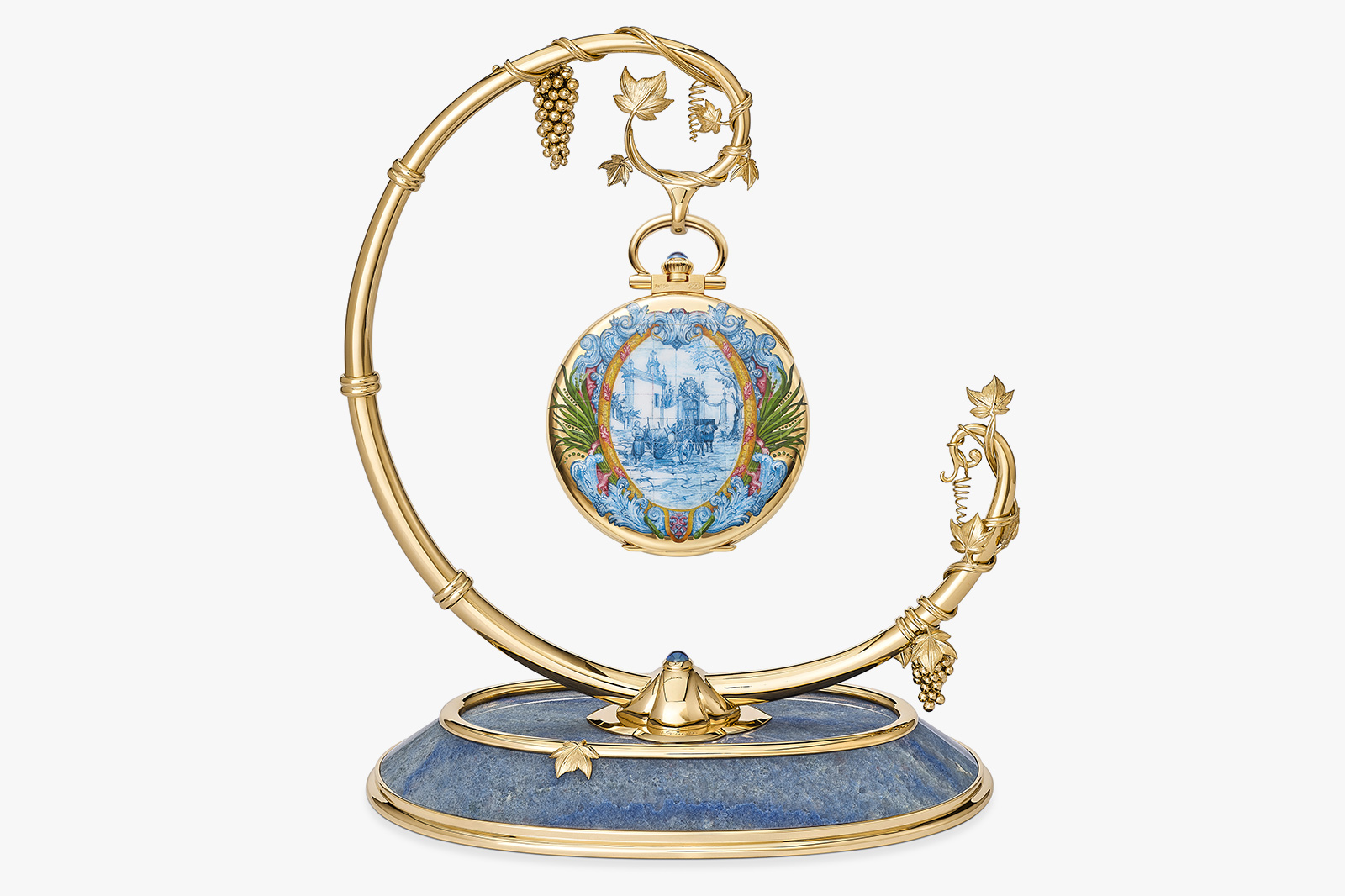 While Patek Philippe repeatedly show that they’re masters of calibres and complications, they also like to remind us that they are experts of other aspects of watchmaking like dial artwork. As such, each year they create an exclusive collection of one-of-one or limited edition wristwatches, mantle clocks and more to show off their arty side. Frequently these watches are Grand Complications with additional rare handcrafts.

There are intricately detail trains produced in cloisonné enamel as well as hand painted vistas of Geneva. My personal favourite is the Swallows in Flight minute repeater, which features enamel swallows in a sky of intricate guilloché. And once again the calibre is still great, the R27 automatic movement with a 48-hour power reserve. Patek are nothing if not consistent, and constantly excellent at that. 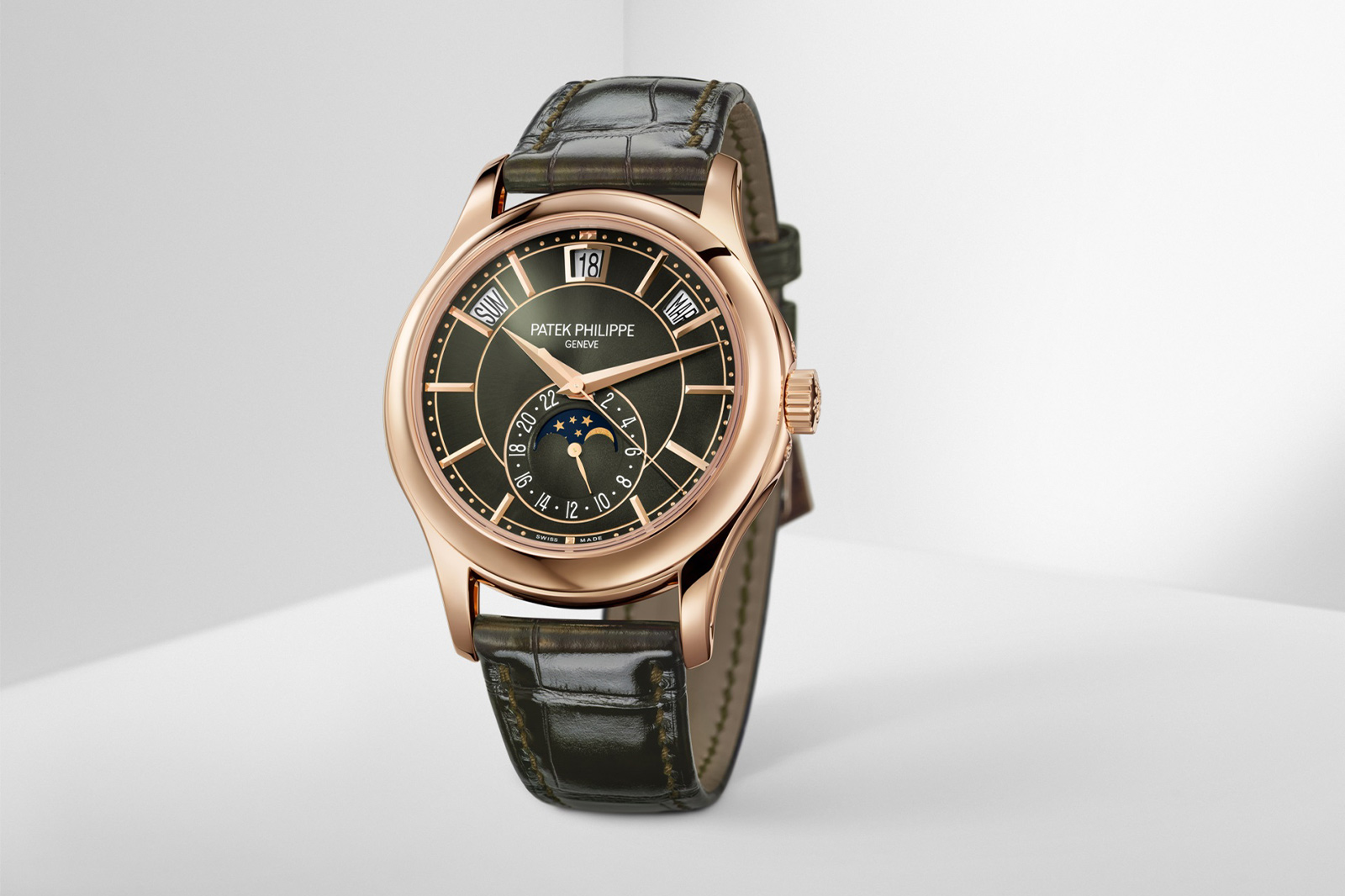 Considering we’ve already looked at the Grand Complication you can probably make a solid guess about what the Complication is. It’s a more accessible version that use fewer and simpler functions. Instead of perpetual calendars you’re more likely to find GMTs, annual calendars and chronographs, and as such they’re much more accessible than their Grand cousins, by roughly £100,000.

Again, you could pick any Complication to show off from the range but we’ve selected the Annual Calendar in gold with triple apertures between 10 and 2. In a subdial at 6 is another staple of Patek’s high-end pieces, a moonphase – surrounded here by a 24-hour indicator – which has Patek’s signature stylised skyscape, showing a starry night sky. 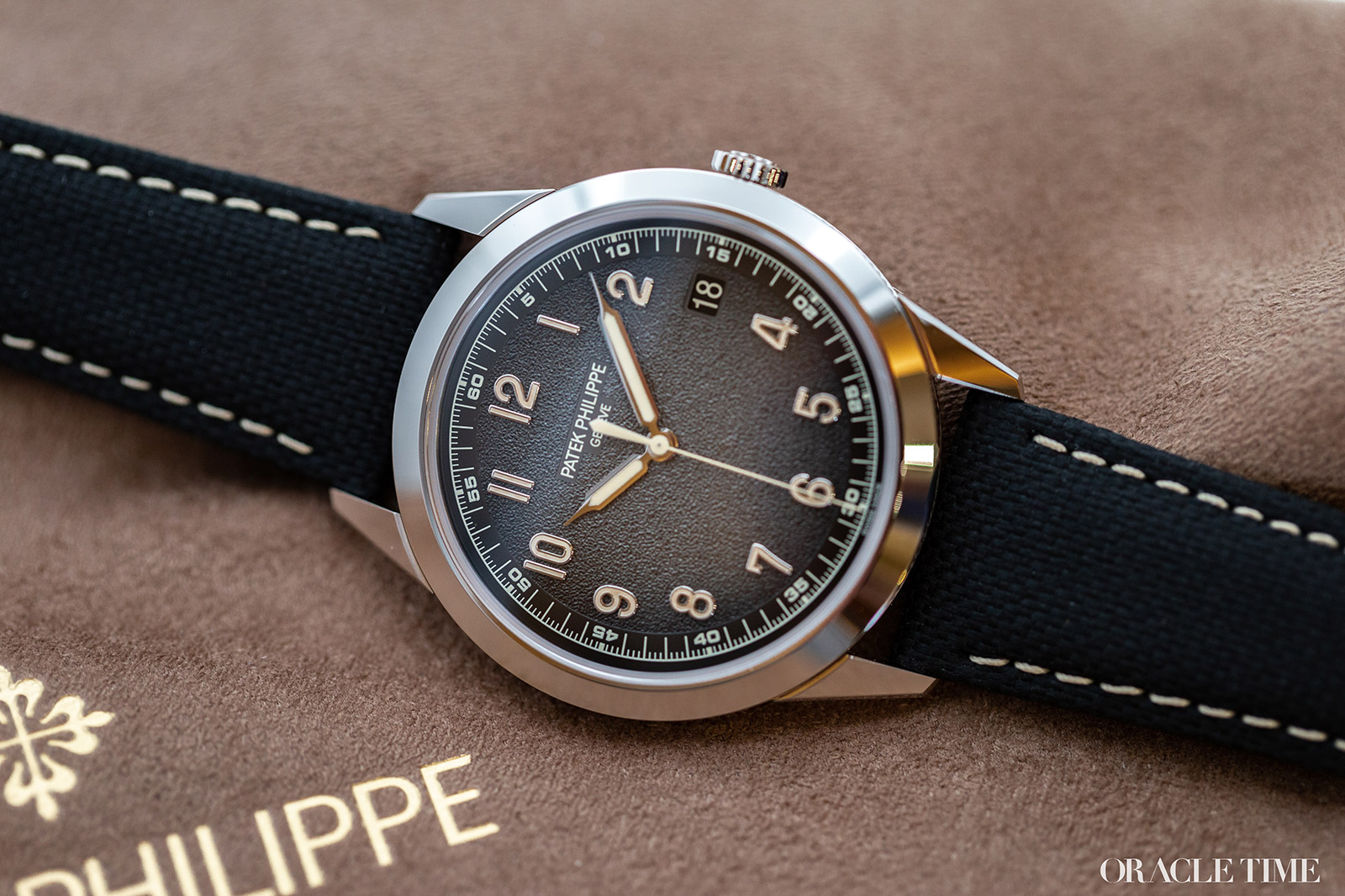 The Calatrava is a retro style watch with precise lines and an elegant round case, which makes it a classic dress watch that oozes character and charm. This is a true heirloom timepiece and can be found on the wrists of those who appreciate vintage refinement, including celebrities like Paul Bettany.

In 2022 Patek Philippe have expanded the Calatrava range with a new hobnail case and textured dial number, the 5226G. It’s incredibly retro, inspired by the textures and style of vintage camera cases. However, while it is retro, it feels modern compared to many other watches in the collection which favour classical elements. 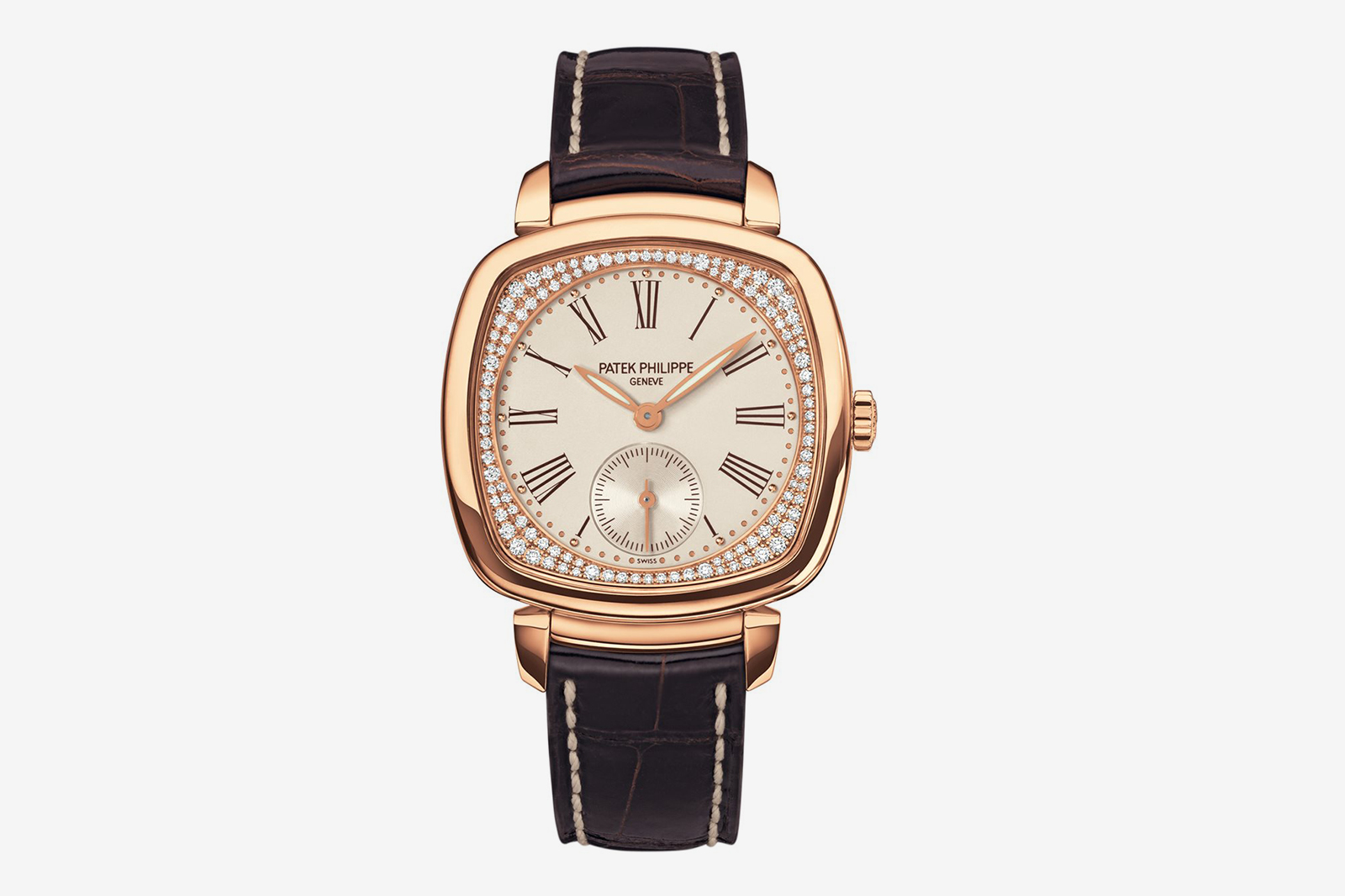 A golden period of watchmaking was around the 1920s and 30s when Art Deco styles were all the range – Patek’s Gondolo collection is an homage to the period and the brand’s Art Deco heritage. Off the bat, the Gondolo watches stand out for not using a traditional round case, with rectangular, tonneau and cushion cases all finding their place in the range.

As befits the era of razzle dazzle, each of them are embedded with dozens and dozens of diamonds, even the relatively restrained 7041R has 108 of them encrusted on its gold cushion case. But while many brands might be tempted to be cheeky and save on the calibre with a jewellery focussed watch, Patek certainly don’t, giving it the Calibre 215 PS manual movement with 44-hour power reserve. 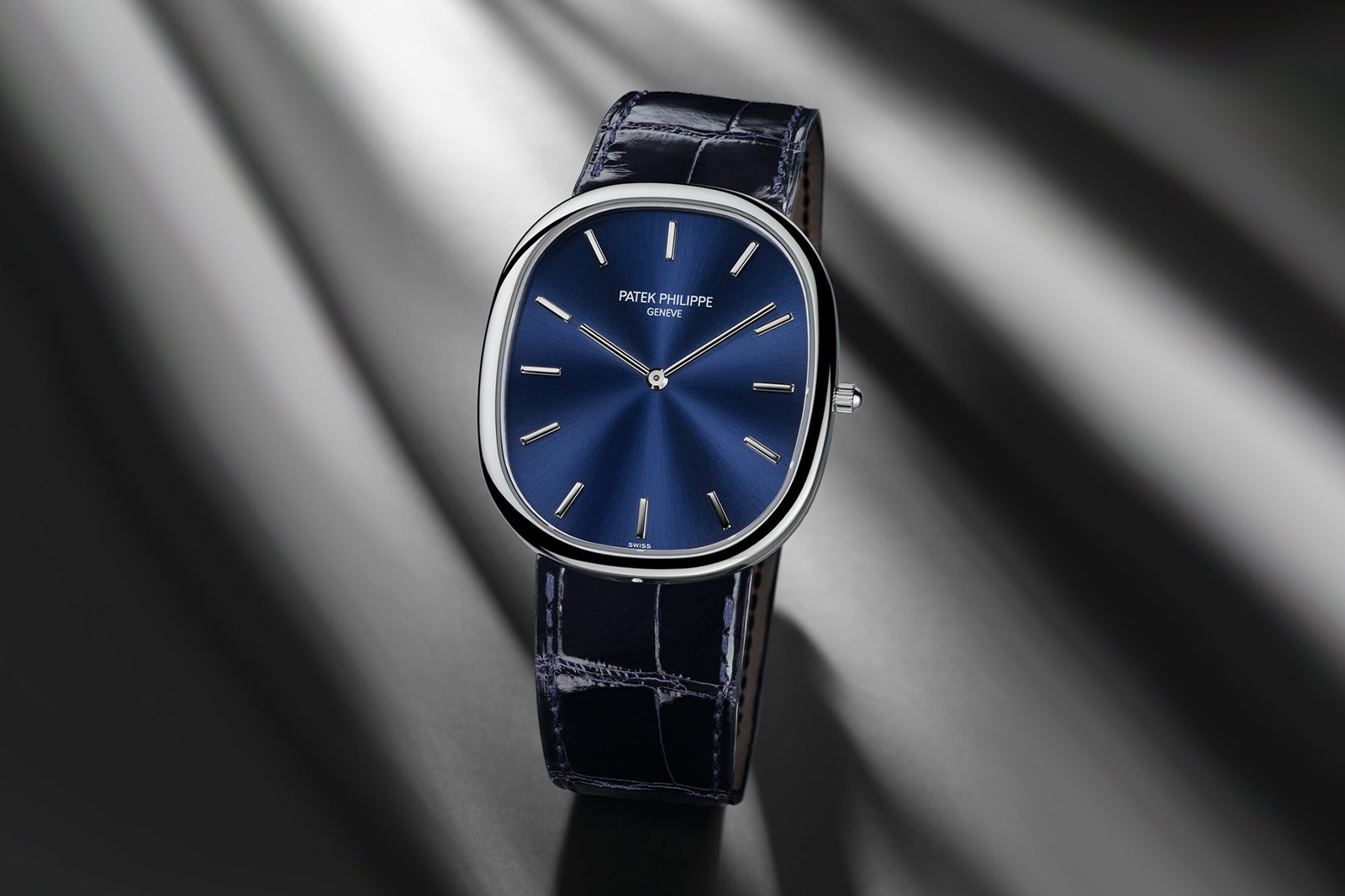 Every now and then watchmakers go out on a limb to try a new piece of technology, or a new material. With the Golden Ellipse Patek created an ellipse case that is very unique, rarely seen from any other watchmaker, a halfway point between a rectangle, a circle and the classic tonneau.

However, the success of the Golden Ellipse was all but guaranteed because it is based on the Golden Ratio. A mathematical formula that dictates the ideal shape of beautiful objects that is widely used in architecture, even in ancient times like the Greek Parthenon.

What’s more, it has a cool blue dial made from gold with gold hour markers housed in the ellipse case which is platinum. 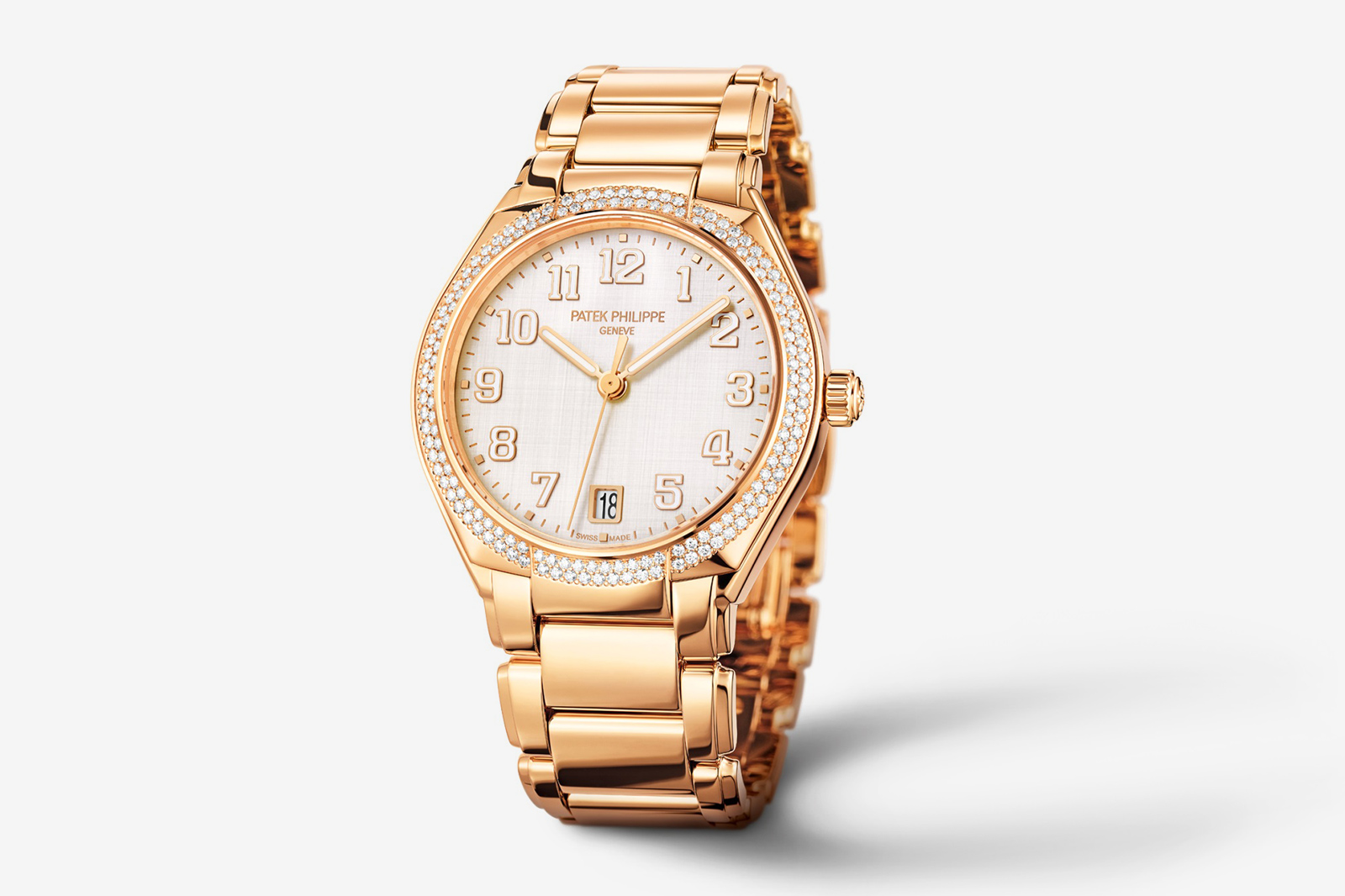 Twenty-4 is Patek’s dedicated women’s collection, which feels faintly ridiculous because there’s nothing overtly masculine about their other watches that would necessitate a separate women’s line. And frankly, if Patek Philippe could see it in their hearts to remove the diamond bezels on the Twenty-4 they’d be perfectly lovely gender neutral watches.

They’re 36mm with a variety of case sizes including rectangular versions on offer. Originally the collection featured Patek’s quartz movements although more recently they’ve been upgraded to have proper automatic numbers. They’re fairly simple designs that, while cool, don’t quite have the same flair as Patek’s other watches and at Patek prices, anyone would prefer a Complication.

From the cool to the outrageous, here are the best watches owned by Premier League managers.