Classical minimalism? Timeless sophistication? A modicum of restraint? Who needs any of that? As rappers, cocaine barons and blurred combinations of the two have shown us, gaudy is good; bling is best. So, hold on to your hard hats because we’re about to make it rain diamonds. 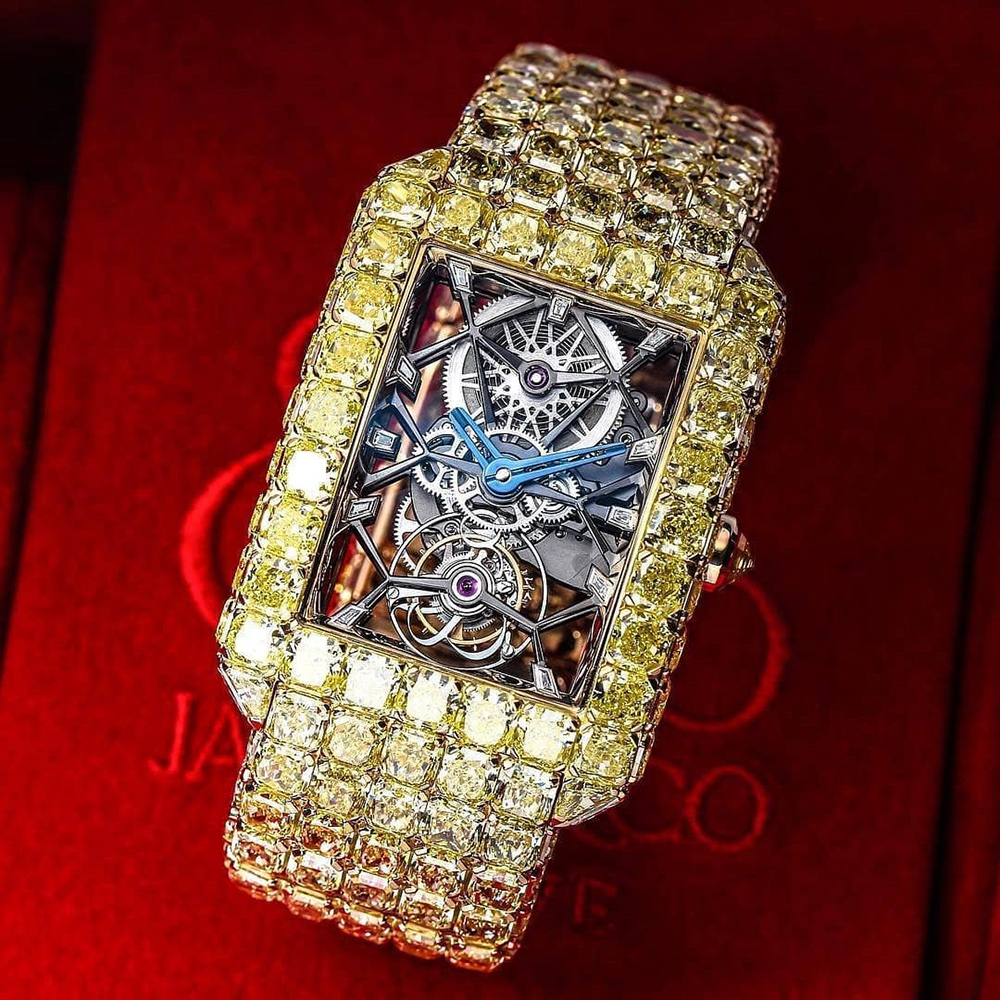 It’s not particularly likely Jacob & Co can ever outdo their 2015 ‘Billionaire’ watch. It looks here like they haven’t even tried. There are only 127.45 carats of stones! Ok so they are rarer yellow diamonds and yes, it’s not like anyone will miss this baby on your wrist. And yes, it does make a nice change from the flood of white stones out there, especially with that striking skeleton movement at the centre but… where was I? More at: www.jacobandco.com 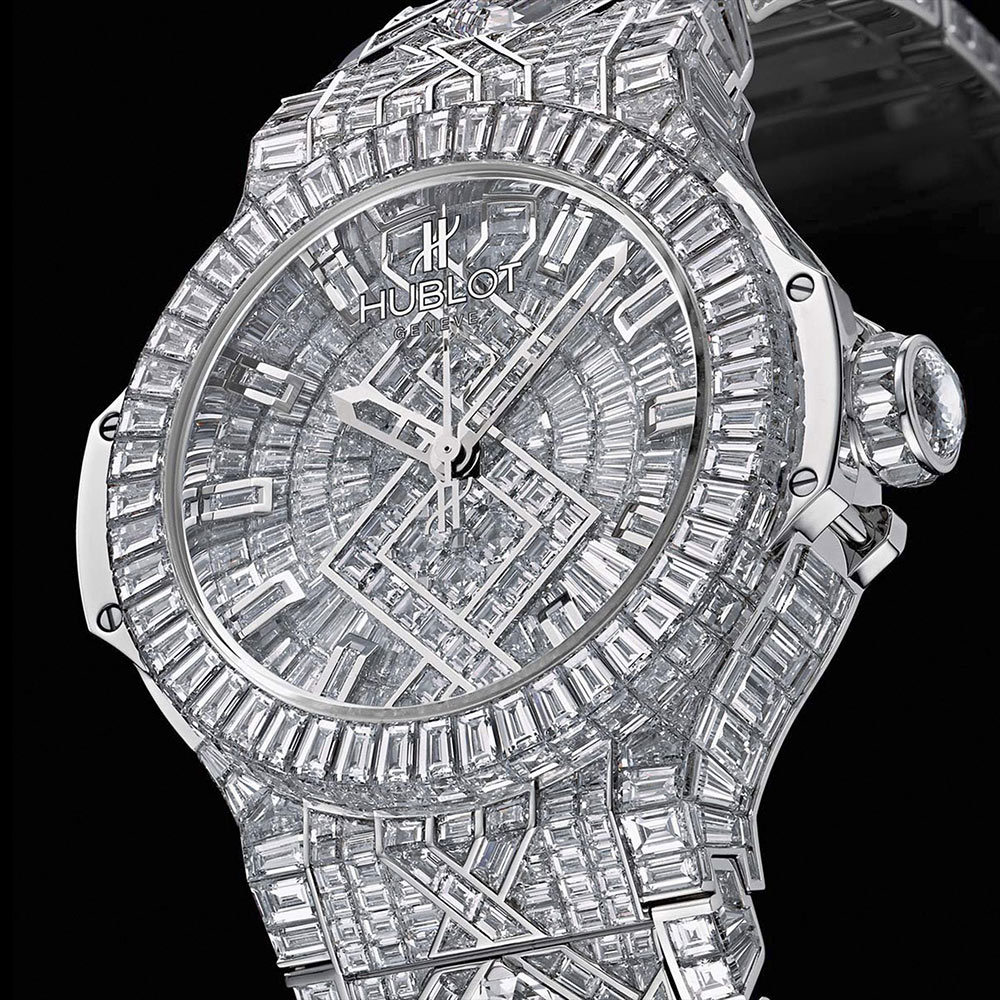 You know what they say about guys with big watches: they have more space for diamonds. The Big Bang isn’t just big, it’s huge, so this one’s 1,282 stones aren’t a surprise. Every square inch is fully-set, with a huge diamond in the crown fit for a king. It’s some fitting wrist candy for the guy who wrote Watch the Throne? You can get a more toned-down version if you’re not quite up there with hip-hop royalty, but why would you? More at: www.hublot.com 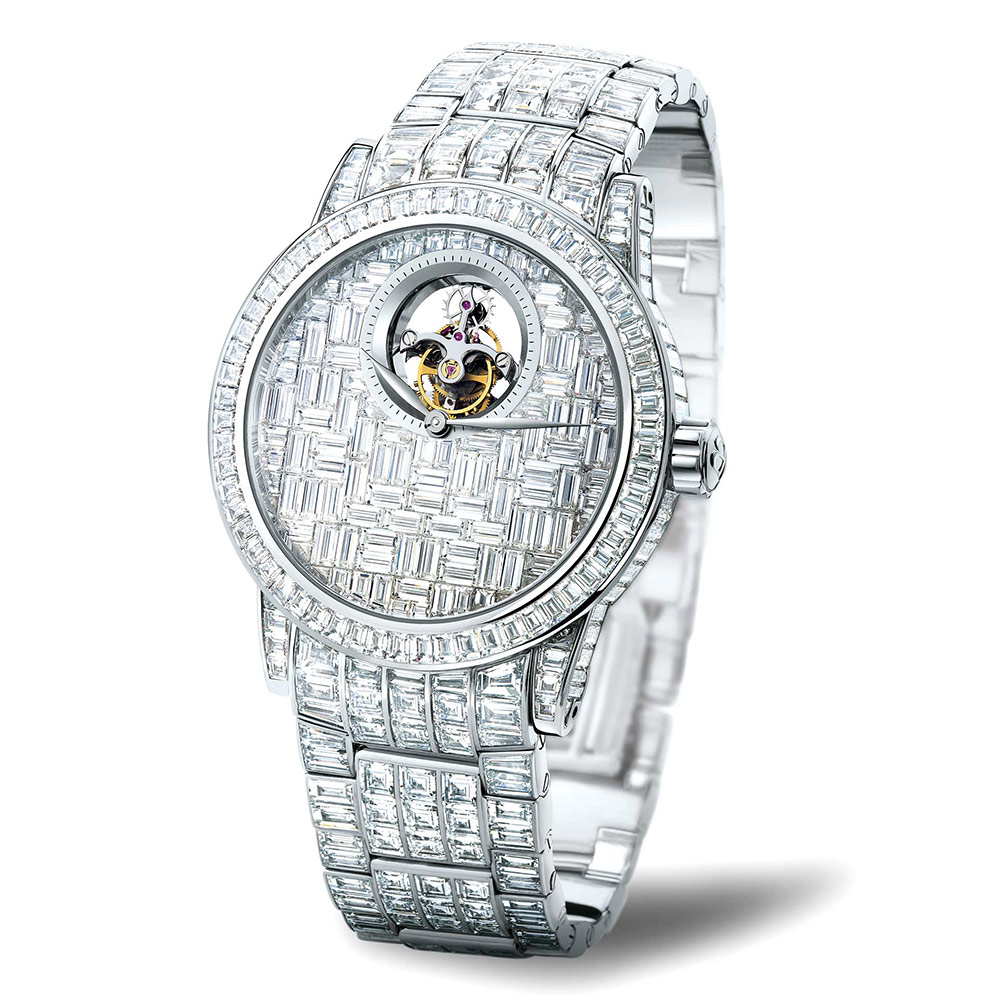 Blancpain apparently got bored of standard baguette diamonds and decided to branch out on their own, creating a crazed mosaic of stones across the dial of their classic tourbillon. And the bezel, lugs and bracelet. Everything in fact bar the tourbillon cage. Even then, if they could they probably would. It might have a mere scattering of diamonds – a pathetic 408 – but it’s not the size of your diamond mine, it’s how you use it. More at: www.blancpain.com 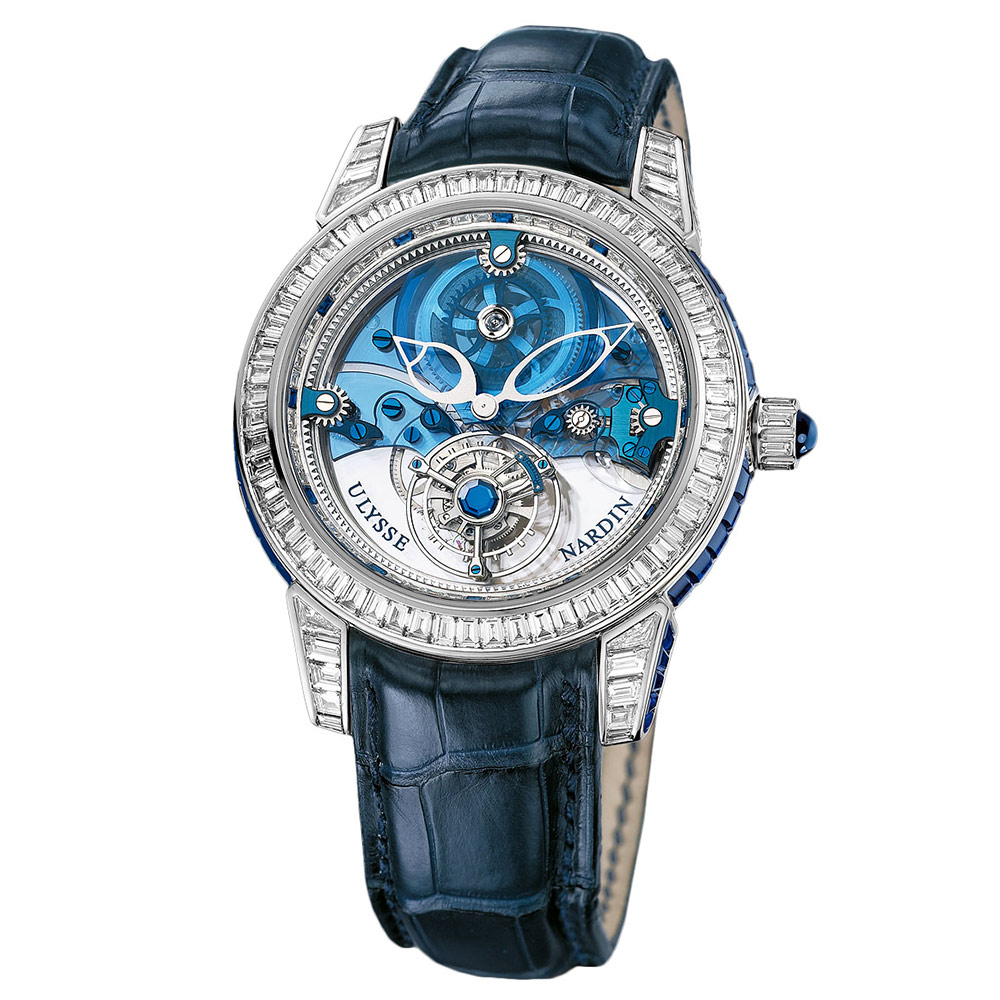 Bored of diamonds yet? I don’t blame you; diamonds alone can be a bit dull really. Here, Ulysse Nardin has added a splash of royal blue to match its crown jewel haul of diamonds on both the coloured sapphire bridges and the non-synthetic type around the edges, crown and very centre of the tourbillon cage. The case is in platinum rather than white gold which is nice to know, even if you don’t see much of it. More at: www.ulysse-nardin.com 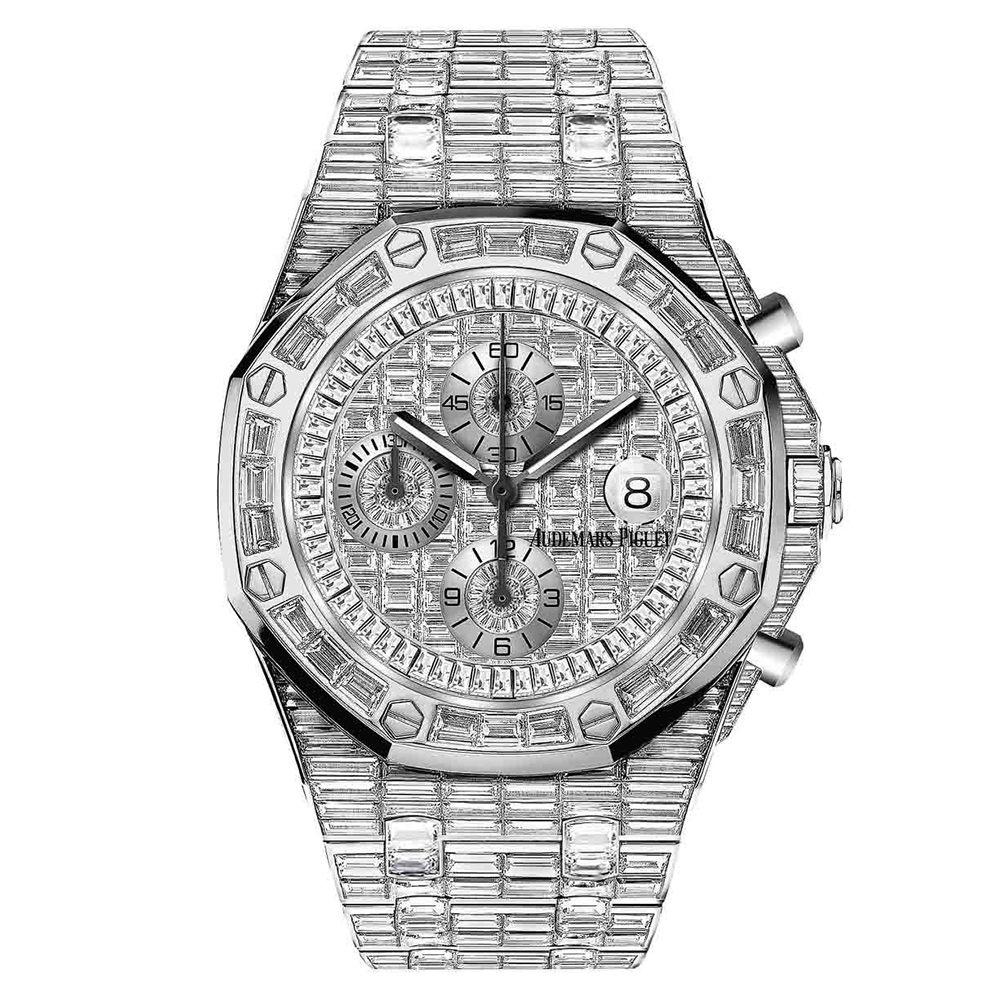 Feeling a bit understated today? This might be the one for you, with a dusting of 88 diamonds totalling just under 50 carats. It’s positively restrained. Granted you can’t set diamonds on those signature screws – it wouldn’t be a Royal Oak if you did – but it doesn’t even come with a tourbillon! Maybe get it as your everyday, run-around piece. At least it can handle a few knocks; it takes some effort to scratch the hardest material on earth. More at: www.audemarspiguet.com 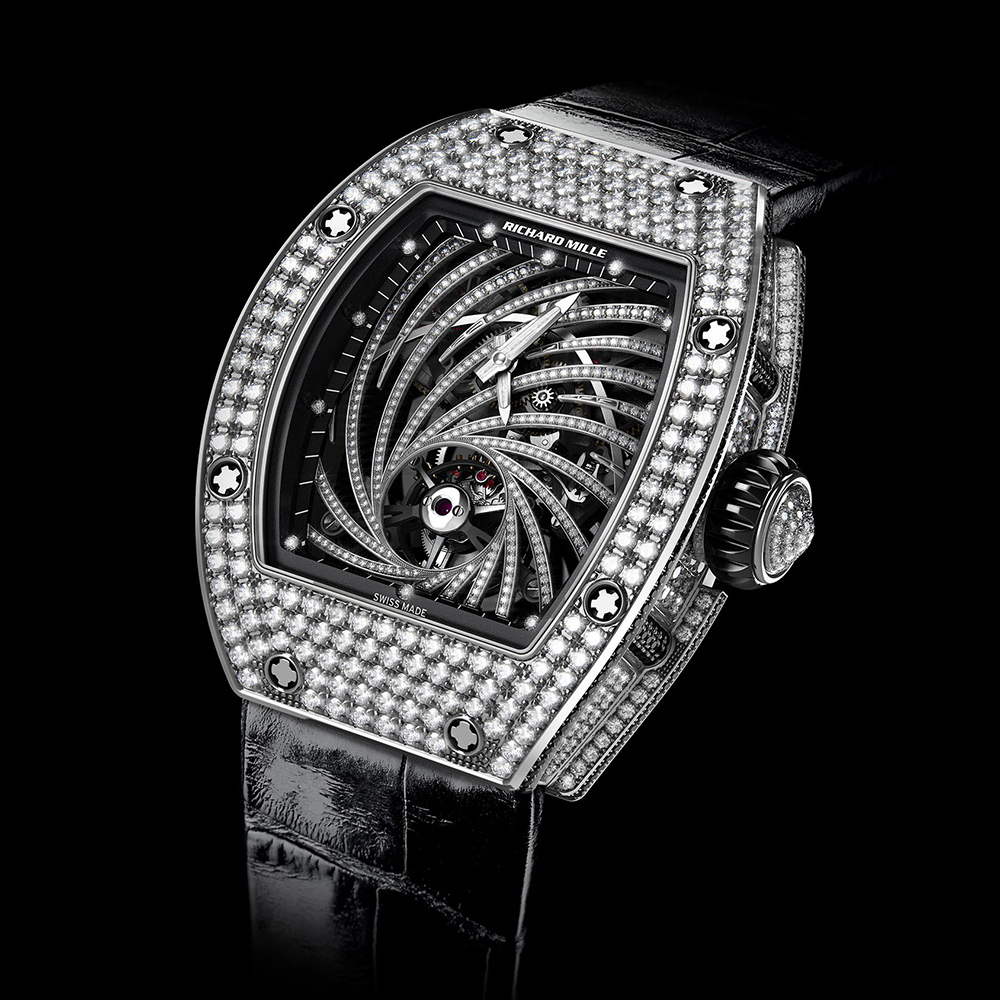 The actual diamonds used in Richard Mille’s high jewellery piece aren’t the biggest in the world; far from it really, even on this list, but there’s a lot of them. Strangely enough, they’re used in a more thought-out way than most diamond watches, scattered across a galaxy spinning out from the tourbillon escapement at six o’clock. There are more stars in the night sky than diamonds on this version of the RM-51… but only just. More at: richardmille.com