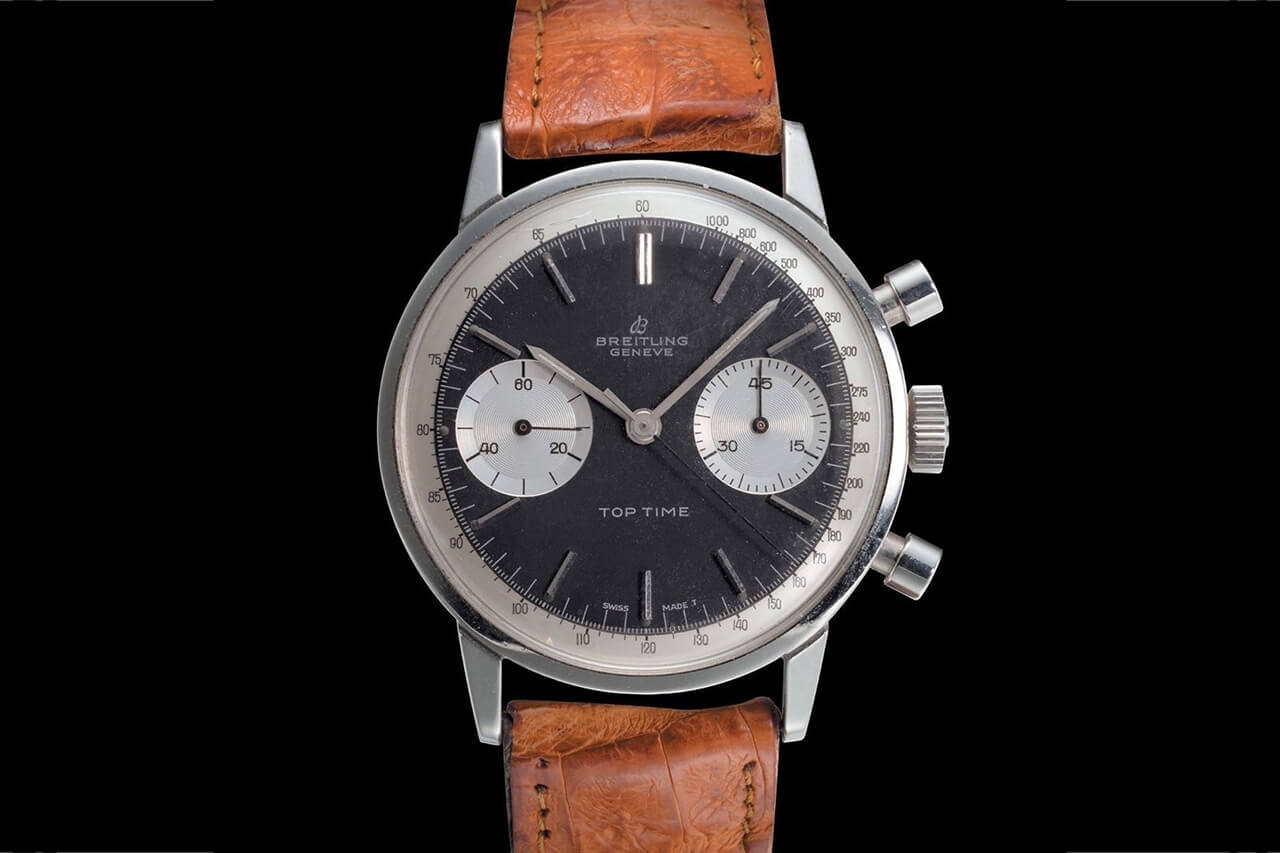 Breitling Top Time from 1965’s Thunderball (the film version of the watch is equipped with a Geiger counter).

The 1960s Saw a Dynamic Shift in culture and design, characterised by the trailblazing energy of the youth – the baby-boomer generation. Conventional tastes of prior decades warped into something profoundly different, with music, clothing and arts following suit. With little choice but to adapt to the needs of an influential youth, the watch industry’s efforts to simplify their designs spawned some of the most exciting periods in watchmaking history.

Rolex’s Daytona and Heuer’s Carrera are among many of the iconic sports watches to hold such appeal and value in today’s market. However, it is Breitling, one of the earliest innovators, whose Top Time model remains one of the most overlooked yet highly significant watches to emerge from the decade. 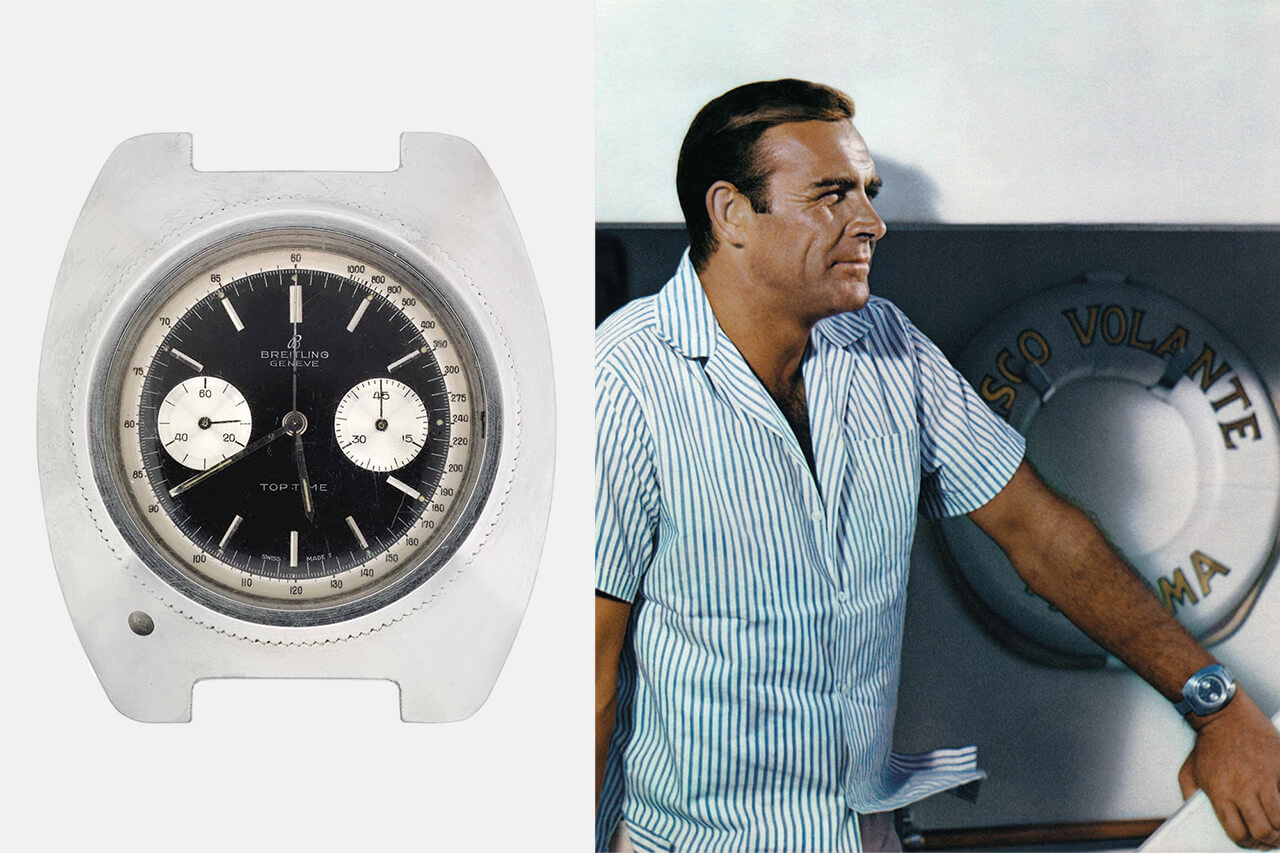 Superseding the legendary Navitimer, the Top Time was a chronograph of contemporary flavour and simple design. Its dial remains stark – abandoning the complexities of its predecessors in the Breitling catalogue, instead opting for an elegant and precise display. Carefully marketed to appeal to the trailblazing spirit of the ‘60s youth, Breitling’s new chronograph embodied living life to the hilt and making every second count. Even in its name, the ‘Top Time’, remains punchy, literal and memorable. 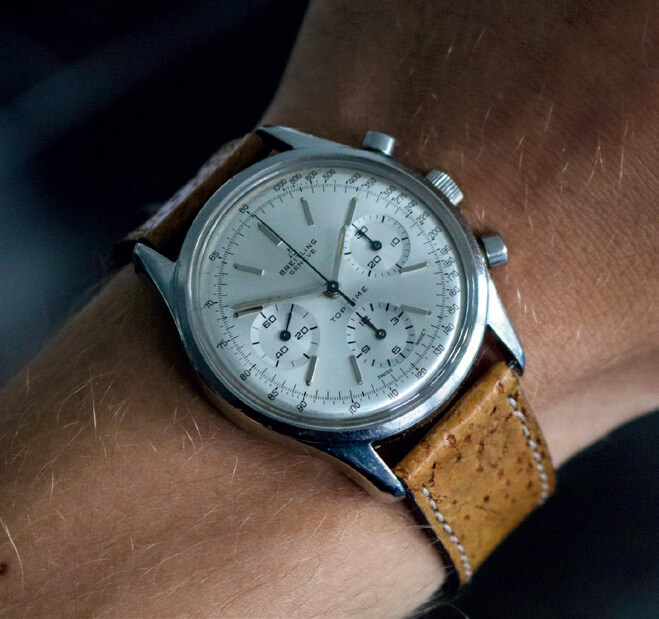 The Top Time’s most typical design is a black dial with two silver subdials, offered with three alternate outer scales: tachymeter, pulsometer and decimal. Upon its release in 1964, the chronograph found instantaneous success due to its affordability and appealing size of 36mm. The following year, the Top Time achieved ‘Bond Watch’ status when championed by Sean Connery’s James Bond in Thunderball.

The Top Time was the first Bond watch to double as a spy tool –fitted with a Geiger counter by Q in the movie. The version worn by Connery was one of the most expensive Breitlings to be ever sold – selling at auction in 2013 for £103,875 (after the seller paid merely £25 for the watch in a car boot sale). 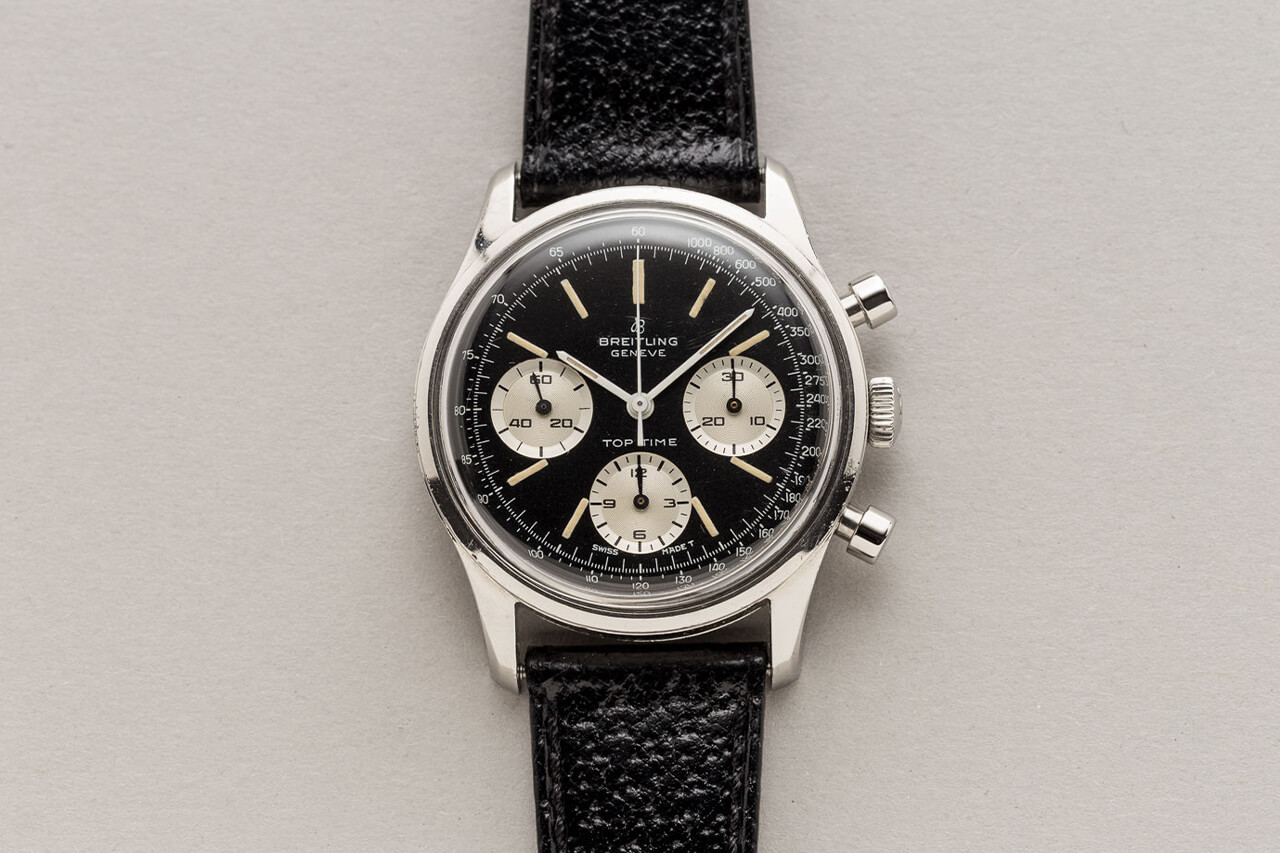 The Top Time would continue to evolve in the late ‘60s through different dial configurations case shapes. Most notably, the Ref. 810 ‘Long Playing’ Top Time offered a slightly more mature, functional display through its inclusion of a third subdial. Shortly following the 810, Breitling would experiment with a square case for a sharper aesthetic. 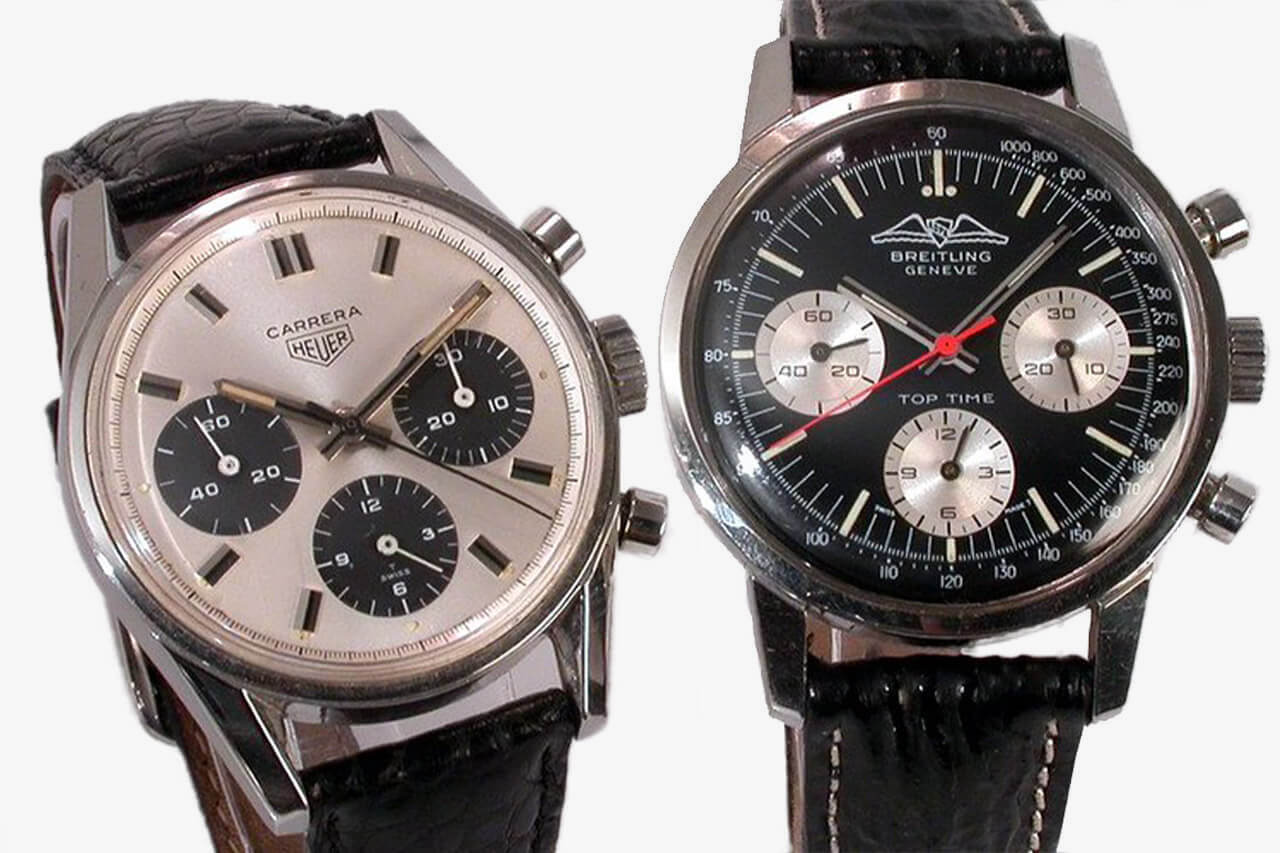 While historic, the Top Time is a watch which seems to linger in obscurity. Comparisons are often made to the Heuer Carrera – a sporty yet simple chronograph to emerge from the 1960s alongside the Top Time. While both are alike in origin and design, the Carrera’s ascension to icon status has cast a considerable shadow over Breitling’s chronograph. In the current market, a Carrera can be worth three to five times the price of Breitling’s equivalent chronograph, despite their similar makeup. 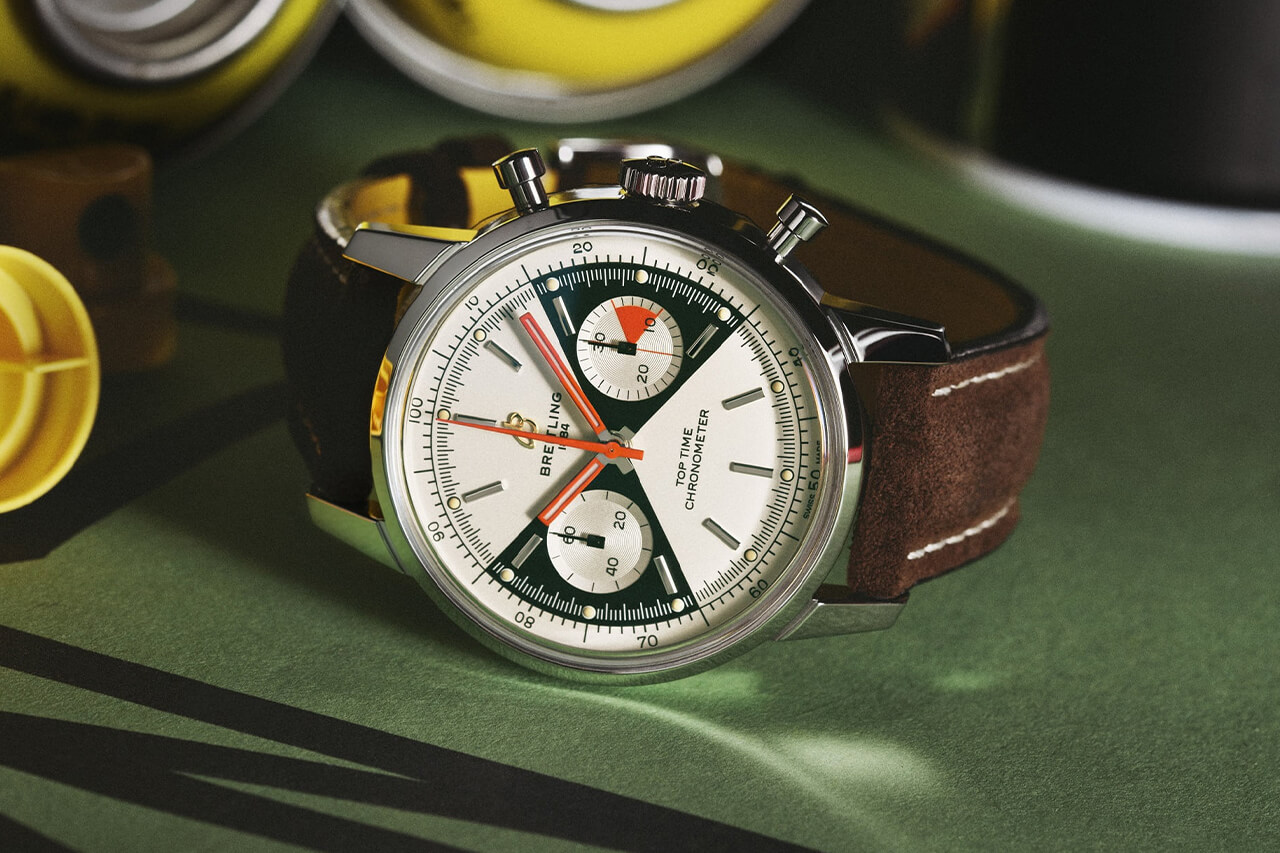 Yet the Top Time’s lower value is not reflective of lesser quality, rather of a legacy untapped. For two decades Heuer has harnessed the spirit of its best-selling chronograph through copious re-editions and design alterations. For years the Breitling faithful have longed for the Top Time’s revival – a wish eventually granted in 2020 through the release of a 41mm limited re-edition, featuring the mask-like ‘Zorro dial’ of the Ref. 2003.

Returning after a 45-year absence, the Top Time’s handsome re-imagining shines in a diverse landscape of modern watches, speaking to the sheer timelessness of the avant-garde design of ‘60s chronographs. If you find an original out there – even if it’s not at a car boot sale – snap it up.