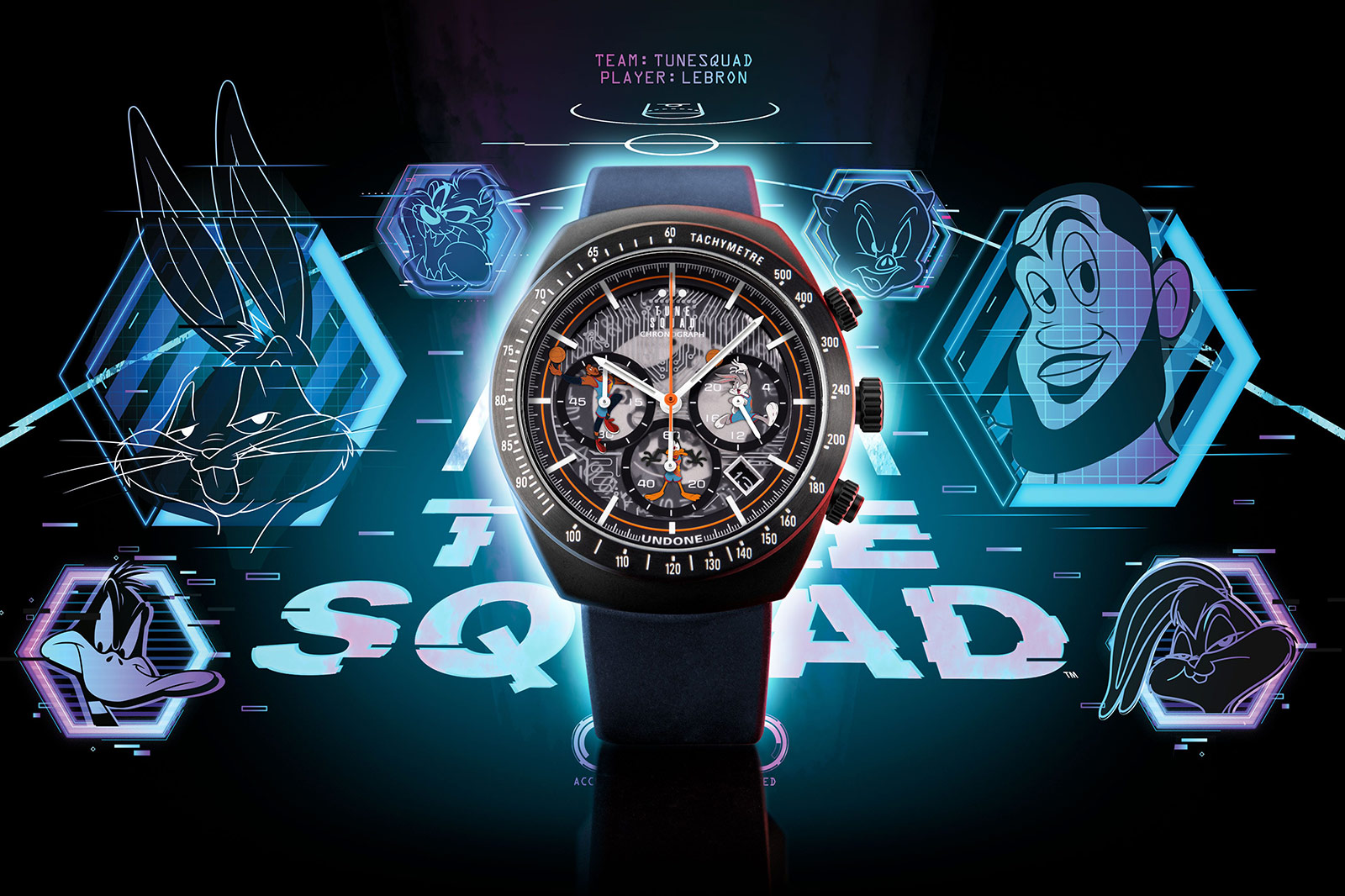 The Looney Tunes are everywhere following the release of Space Jam: A New Legacy, including on a pair of watches from UNDONE, the accessible watchmaker with a flair for customisation. The limited edition Slamdunk watch combines the Tunes with a cool basketball textured dial, while the Tune Squad watch lets you pick your MVP from the 2D line-up. These watches all happen to be UNDONE’s first ever tonneau cases.

While the Slamdunk and Tune Squad are separate watches, the only real difference is the dial, so we’re going to look at the Slamdunk in detail before covering what the changes come with the second piece. 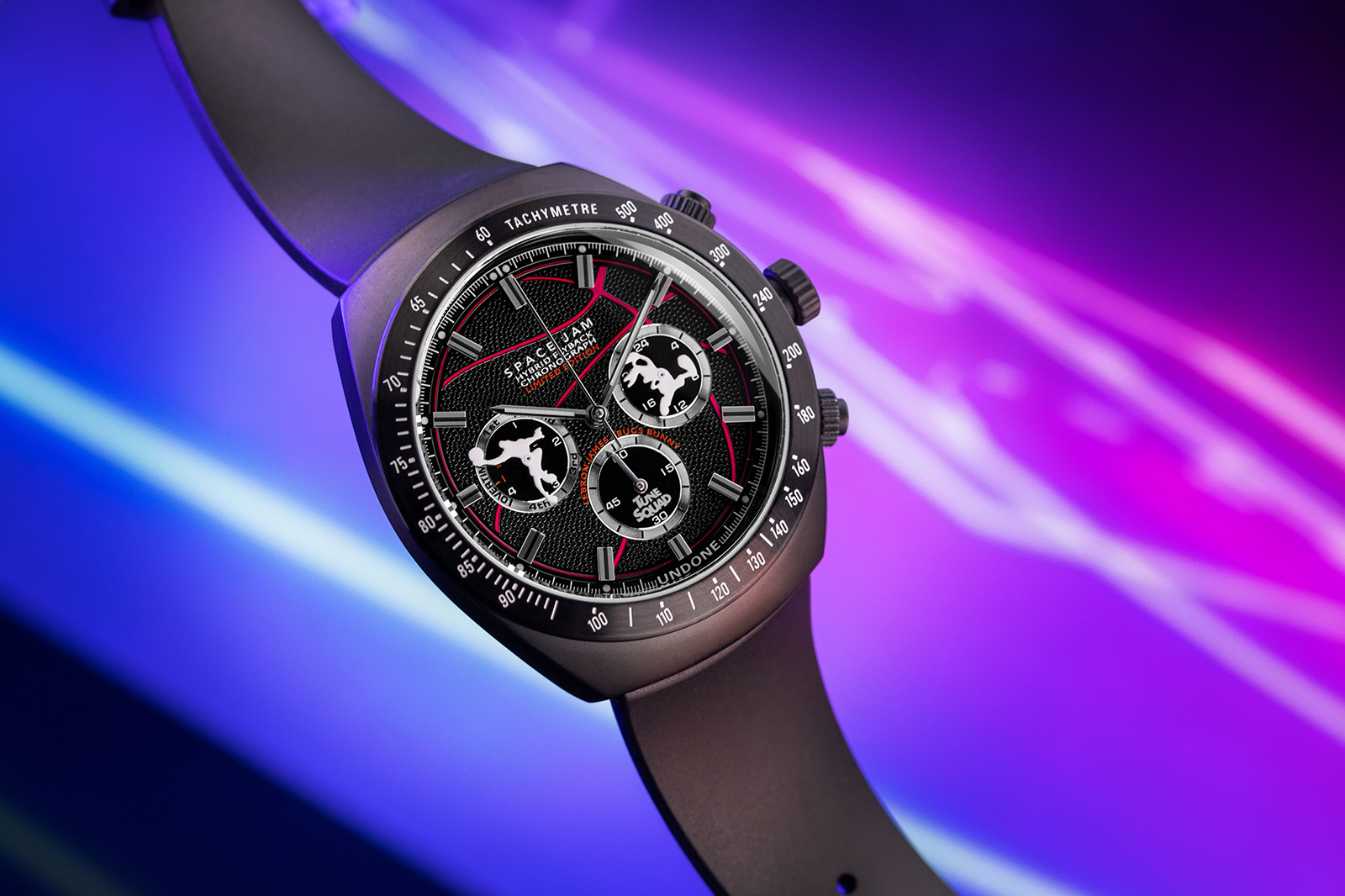 As previously mentioned, this is UNDONE’s first tonneau case. It’s made from stainless steel with a black PVD coating and maintains a circular bezel, so unless you look at the overall profile you might not realise it’s even a tonneau case. Which means it feels like it has more in common with the Omega Aqua Terra rather than a more defined tonneau like a Richard Mille RM – not necessarily a bad thing.

In terms of dimensions, it has a 41.8mm diameter, 48mm lug-to-lug and 12.7mm thickness including double-domed sapphire crystal. And while it’s no diver it has 100m water resistance thanks to a screw down crown, which feels like an industry standard these days. 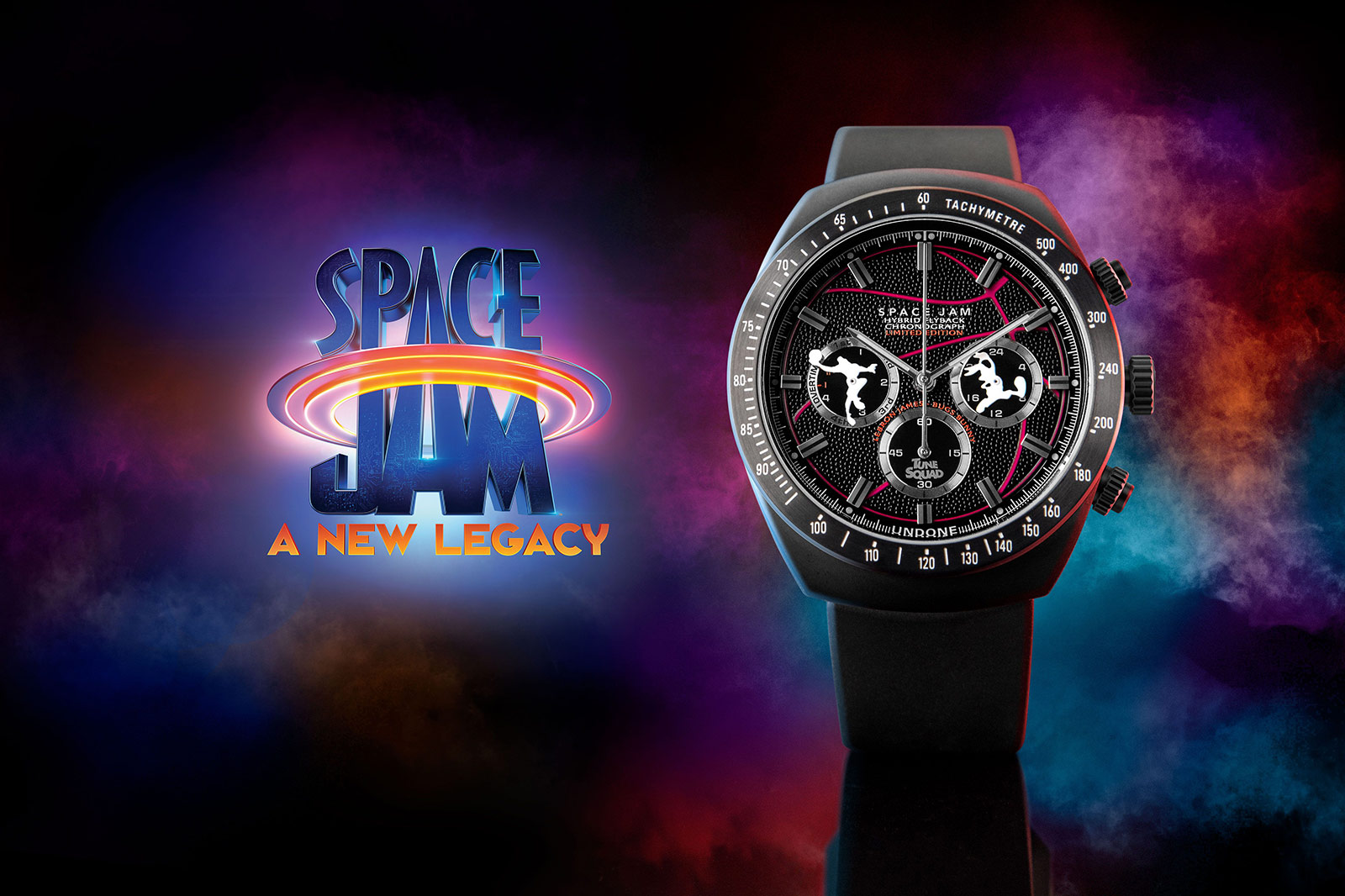 The last point to mention is that the bezel has a tachymeter scale picked out in white, hinting to the fact that the watch has a chronograph function. The dial has a tri-compax layout with a 24-hour timer at 3 o’clock, small seconds at 6 and a custom 60-minute timer at 9. By ‘custom’ I mean that the scale has been designed to match the phases of play of a basketball game, with the 60-minutes split into five sections denoting the four quarters of a game plus extra time. It’s technically the first basketball timer on the market, although a cynic might say that’s because every 60-minute timer can perform that function. 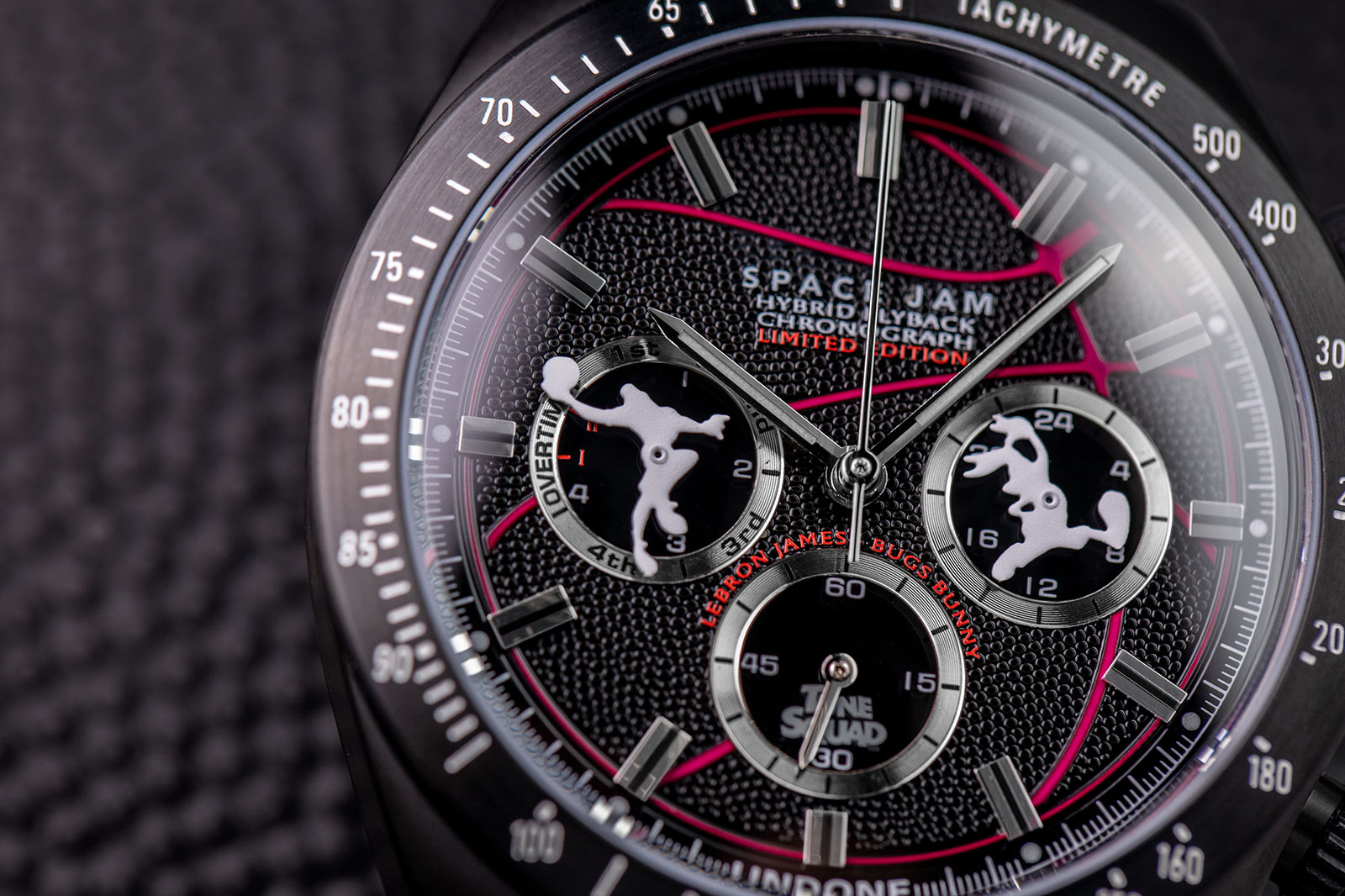 On the aesthetics side, the dial has a surprisingly realistic basketball grip texture in black and red. LeBron James is silhouetted in cartoon form on the 60-minute timer about to pass the ball to Bugs Bunny across the dial. If you weren’t aware, LeBron is the star of the new Space Jam, though he’s no Michael Jordan. The third subdial is mostly bare with an inscription of Tune Squad on it.

Housed inside is a meca-quartz movement from Seiko, the TMI VK63, with flyback chronograph. While the traditionalist in me would prefer a fully mechanical movement, at least it’s a Seiko, who arguably produce the best quartz movements around. The Slamdunk is limited to 300 pieces at a price of $369 (approx. £265). 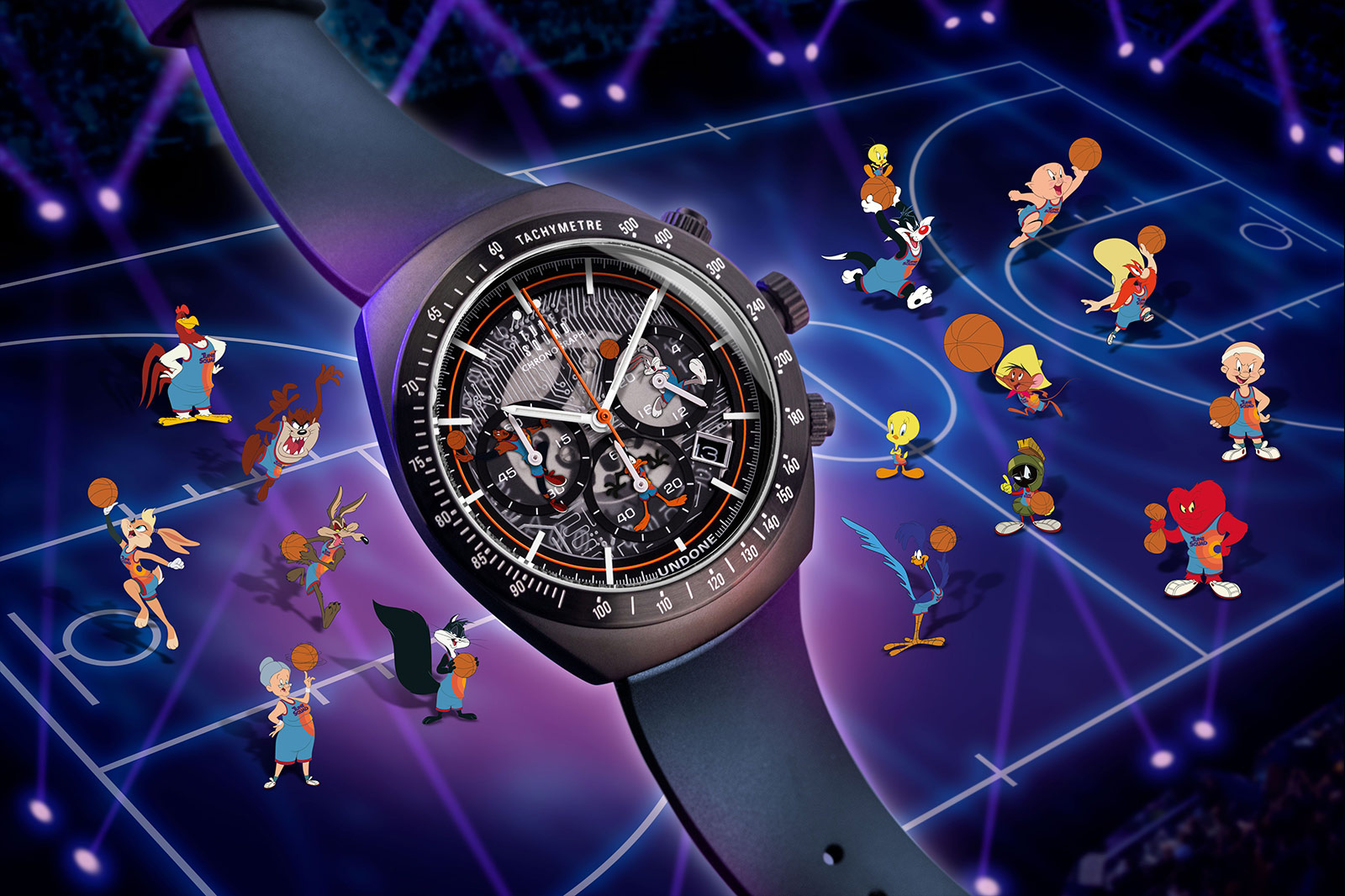 The second Looney Tunes watch, the Tune Squad, has exactly the same technical specs as its limited-edition counterpart. It has a semi-transparent design that gives glimpses of the movement beneath and is also adorned with a modern electricity and cable pattern. The characters who were silhouetted on the Slamdunk are realised in full colour and a third character occupies the small seconds subdial.

What’s more, you can choose which member of the Tune Squad you want to fill in the final position on your watch. You can have fan favourites like Daffy Duck and Lola Bunny or team members like Marvin the Martian, Yosemite Sam and many more, or my personal favourite choice, Wile E. Coyote.