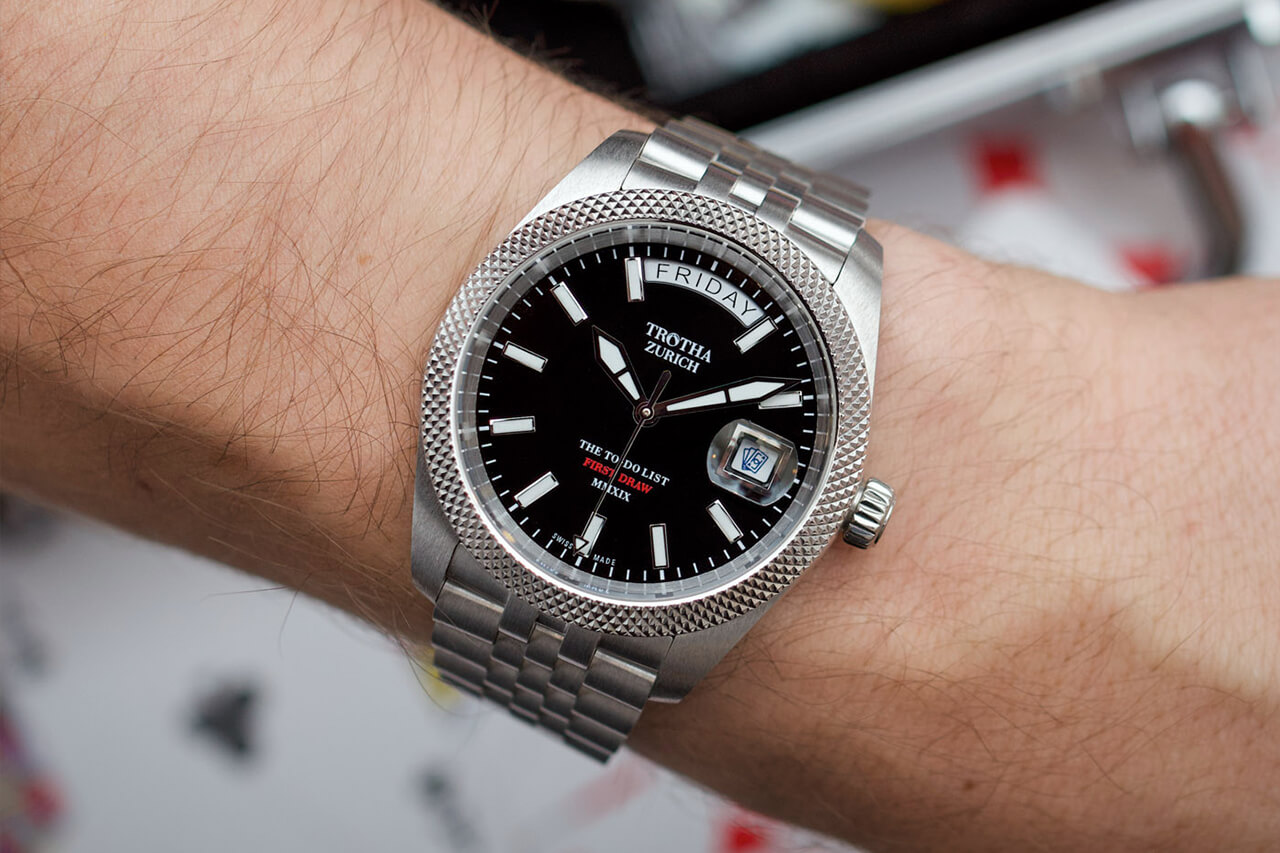 I don’t often like being told what to do, especially by something that should stick to indicating the time. Still, it’s impossible to deny the charming whimsy of the Trotha To-Do List.

The concept’s pretty simple; instead of anything as dull and prosaic as a date, Trotha’s watch instead shows you one of 31 suggested activities, ranging from the beach to a bottle of champagne. Apparently when the Zurich-based brand was researching what to include they stuck pretty closely to the Riviera. Oh and there’s fondue of course, can’t be forgetting the fondue.

It’s the first example of Trotha’s self-mandated watchmaking task to find new uses for old complications. In essence, the so-called Hedograph is just a date ring with playful little pictures instead of numbers – but it’s a lot more so than knowing the day of the week would be. We have phones for that. It’s also more visible than you might imagine on the wrist thanks to the cyclops magnifier. 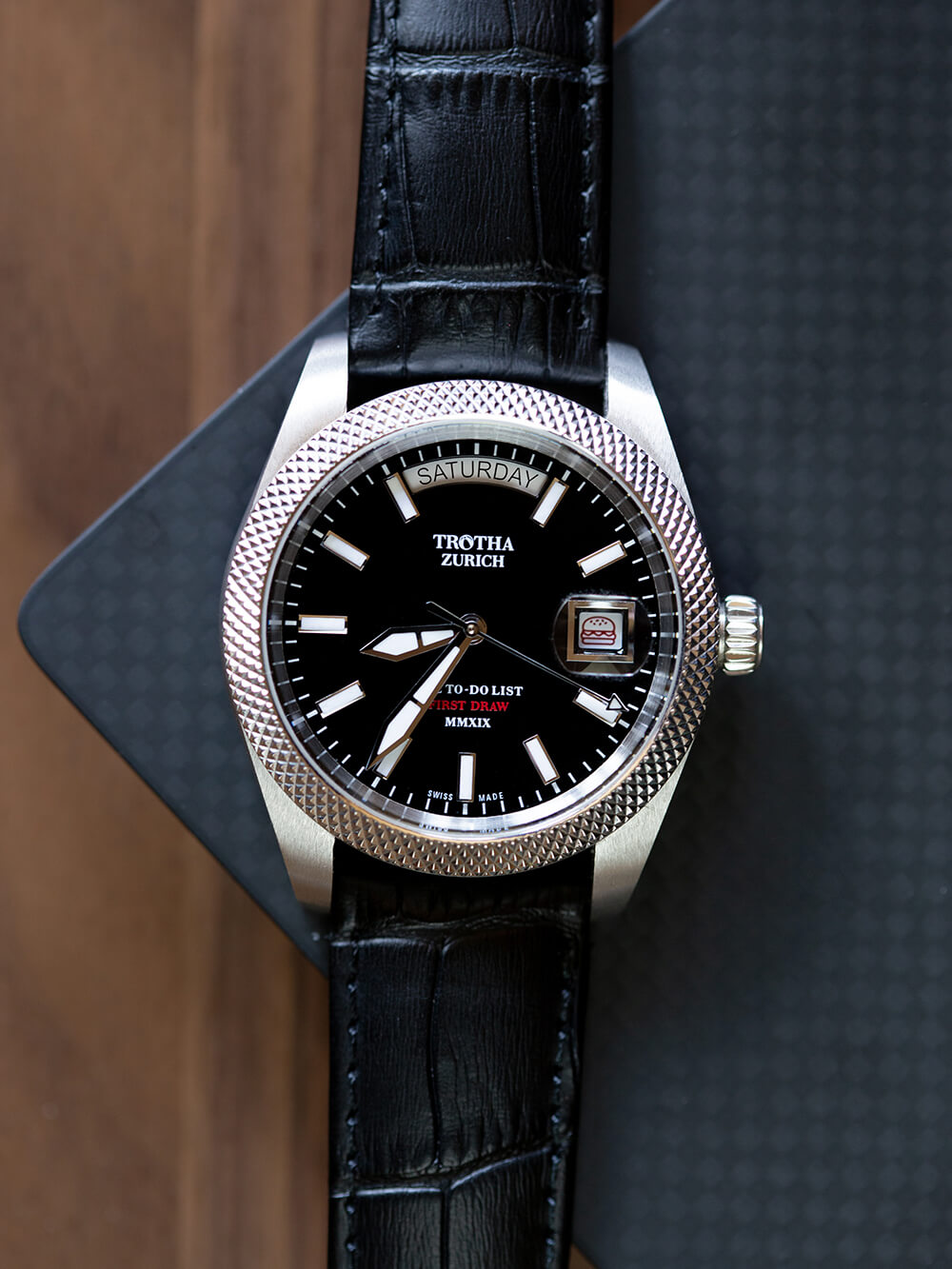 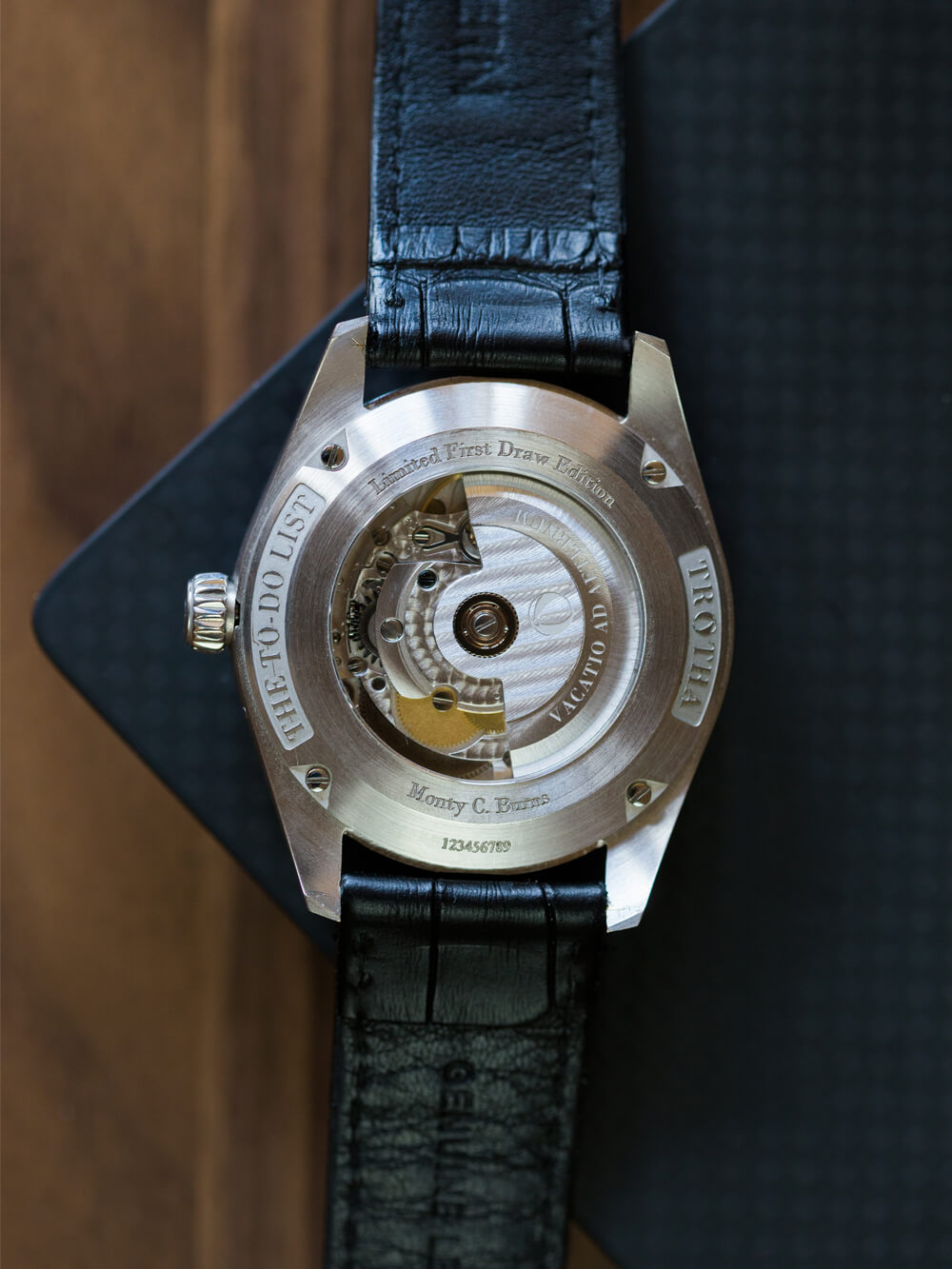 If it were just the Hedograph though, the To-Do List would be a novelty footnote of a watch, fun, interesting but ultimately not much else. Fortunately the rest of the watch is lovely too and, thankfully, a bit more classical.

Like any watch with this kind of dial layout – a magnified window at 3 o’clock, a long form day indicator at 12 – there are some similarities to the Rolex Day-Date in the Trotha, just enough to give it that extra little horological cache.

There are also enough differences so that the To-Do List is its own watch, from chunkier, lume-filled indexes and sword hands to that phenomenal knurled bezel, off a Bentley dashboard. Otherwise the palate of white, black and red is nicely pared back and, thanks to the 38mm stainless steel case, wears very well on the wrist. 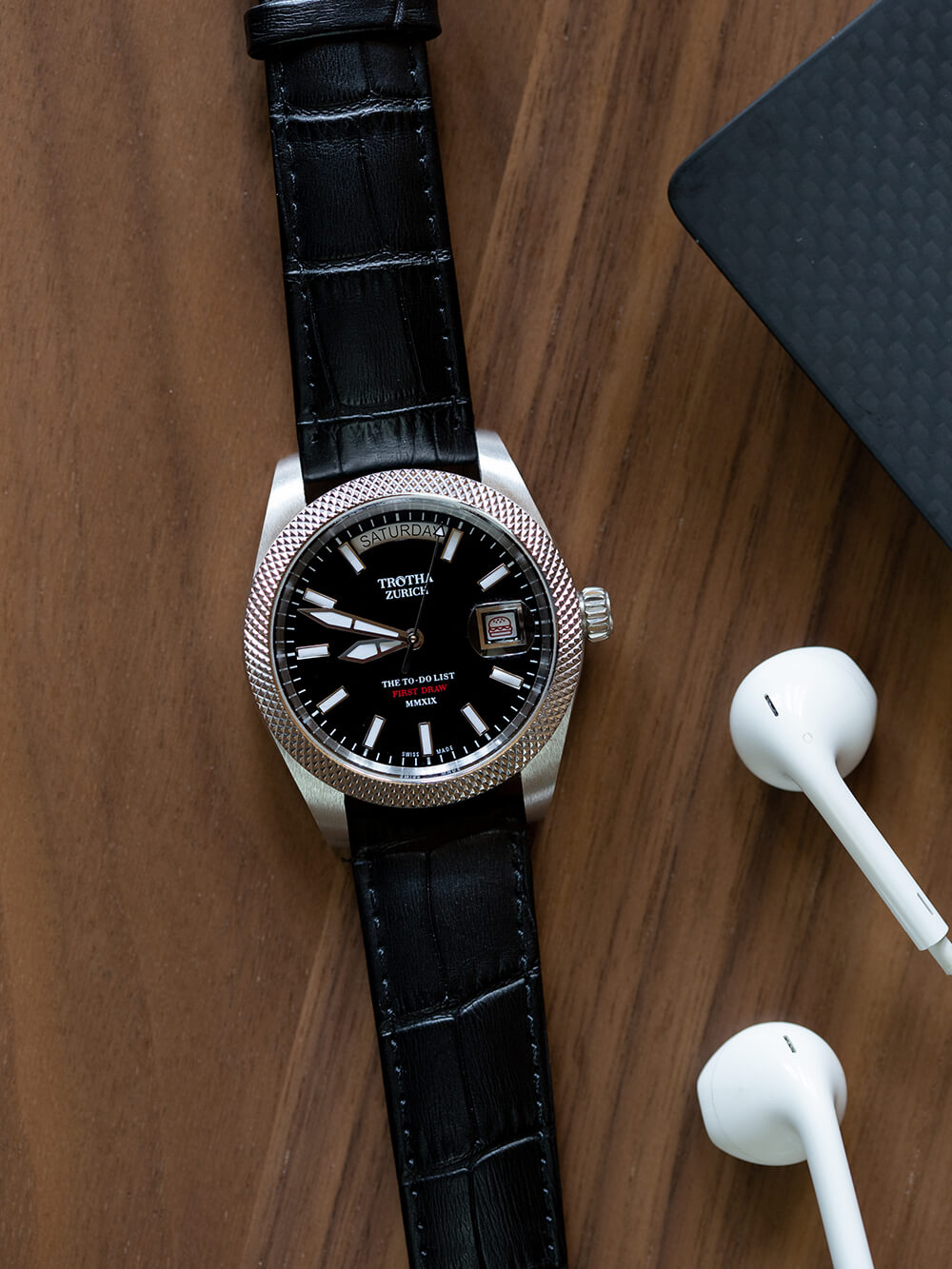 Inside is the Sellita 240-1 Elaboré modular movement, slightly slimmer than your usual stock movement for a more elegant fit under the sleeve. Otherwise it’s the kind of workhorse you can expect from Sellita with a 38-hour power reserve. It’s finished handsomely too, with a beachball-engraved rotor.

I’m not going to say that wearing the Trotha To-Do List made me live my life to the fullest; I just don’t have the love of liquid cheese the Swiss are born with. But it did make me smile on occasion, which is more than can be said of pretty much any other watch out there. 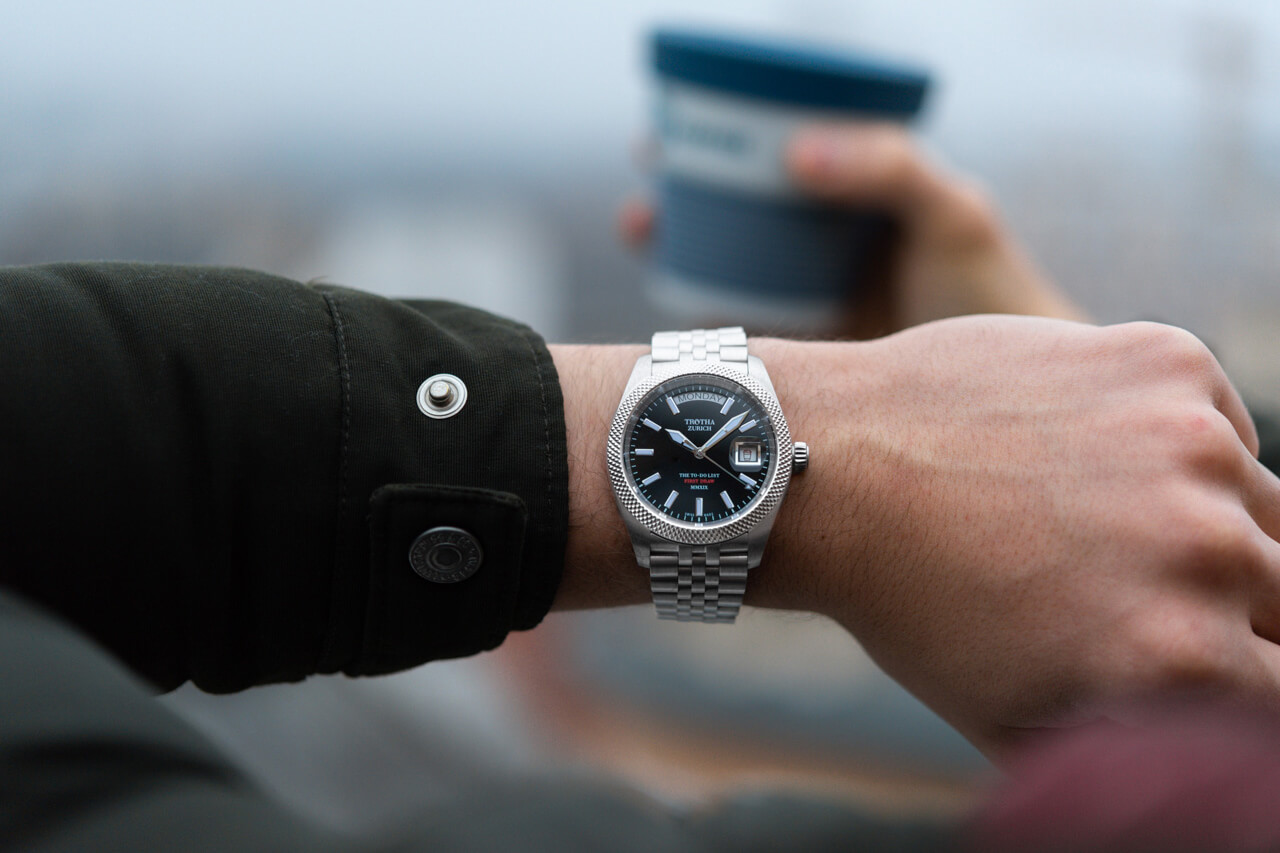 If you want to give it a go yourself, the First Draw edition (a fitting way of saying first production run) will be limited to 300 pieces. You can be sure Trotha will be wheeling it out again after that initial batch, but likely with a different selection of pictures to decide your future.

Anyway, my watch is now telling me it’s Beer O’Clock and I hate to disappoint, so find out more about the Trotha To-Do List at trotha.ch.