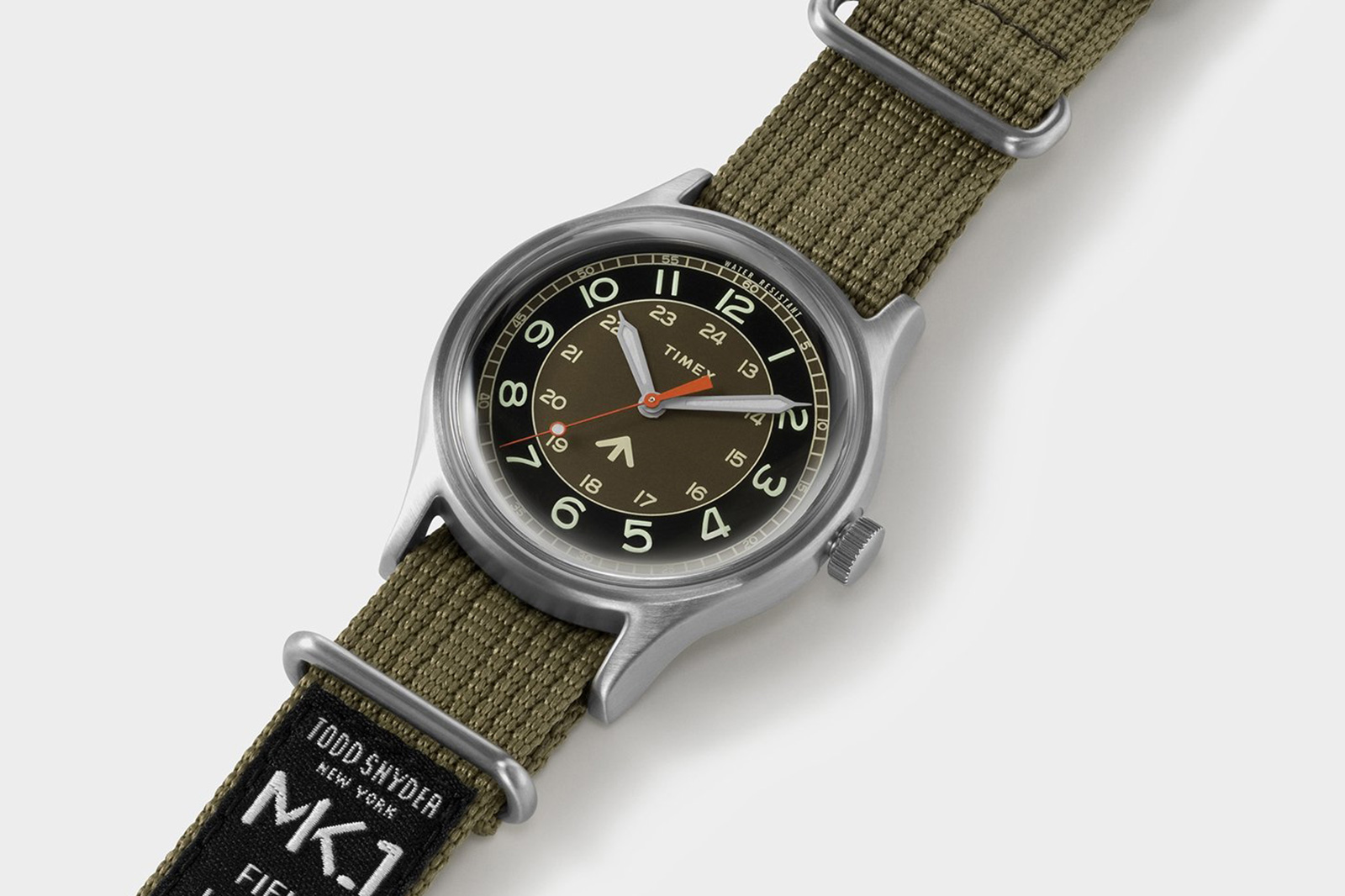 Field watches are designed to be rugged and utilitarian, but that doesn’t mean they have to be aesthetically boring. In fact, they have some of the most widely lauded vintage designs in their ranks, something Timex and Todd Snyder have drawn on in their latest collaboration, the Mk1 Bootcamp, a good-looking watch that maintains Timex’s signature accessibility.

Todd Snyder and Timex are no strangers, having collaborated on military pieces in the past. However, the new watch is part of an exclusive series by Todd Snyder in which the designer is working alongside many of his favourite American companies to celebrate the anniversary of his brand. So, it’s no surprise to see the inscription Todd Snyder writ large on the tag of the fabric strap along with the watch’s details. 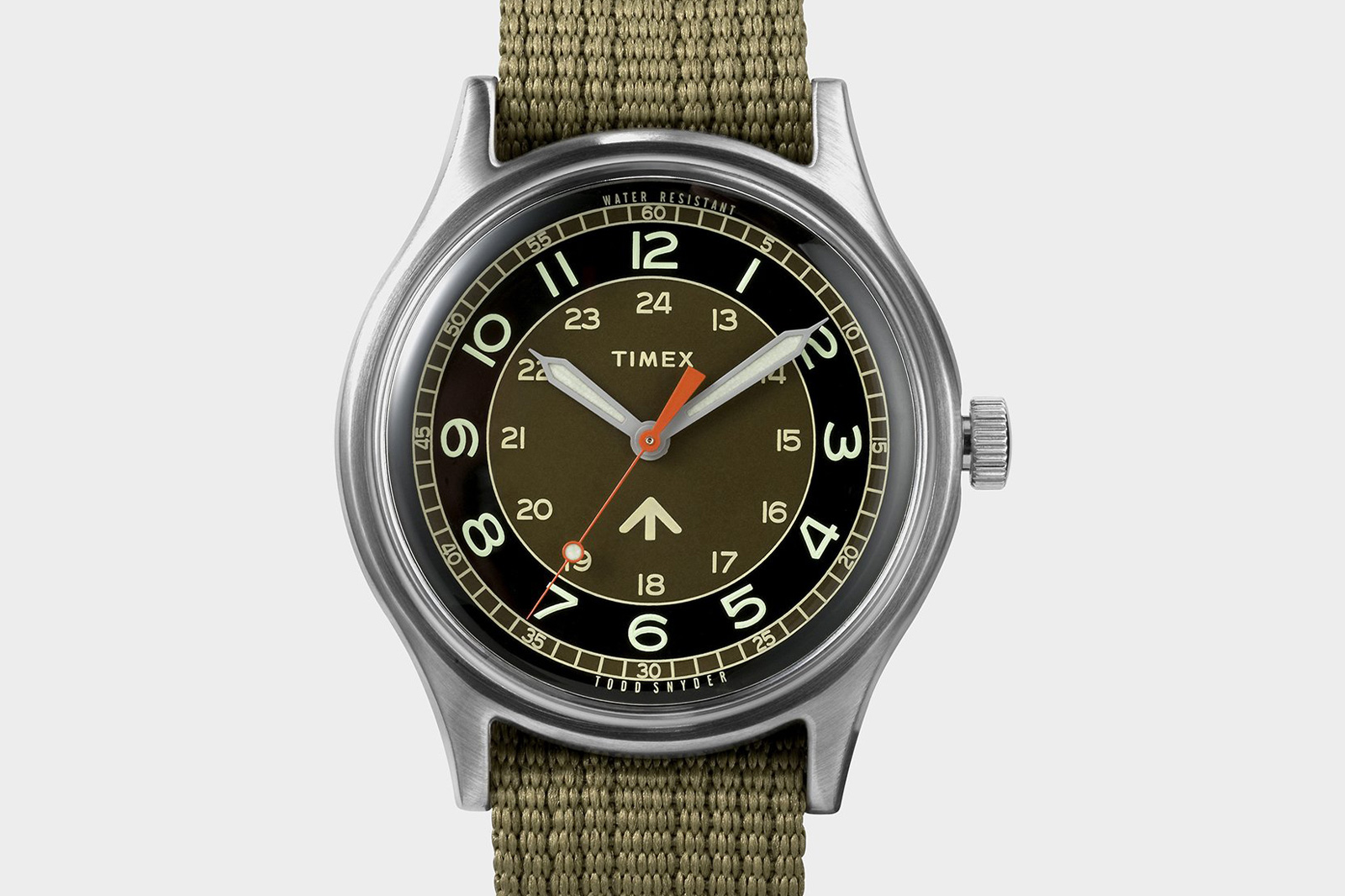 But we’re getting ahead of ourselves; let’s start with the case. It’s classic field watch fare, a 40mm diameter piece made from aircraft grade stainless steel with a simple round shape and an unadorned bezel. Classic design inspirations are to be expected because elements of the Mk1 Bootcamp are loosely based on the Mil-Spec W-46374B, a military issue Timex that was used by the Marines for a period in the 80s. 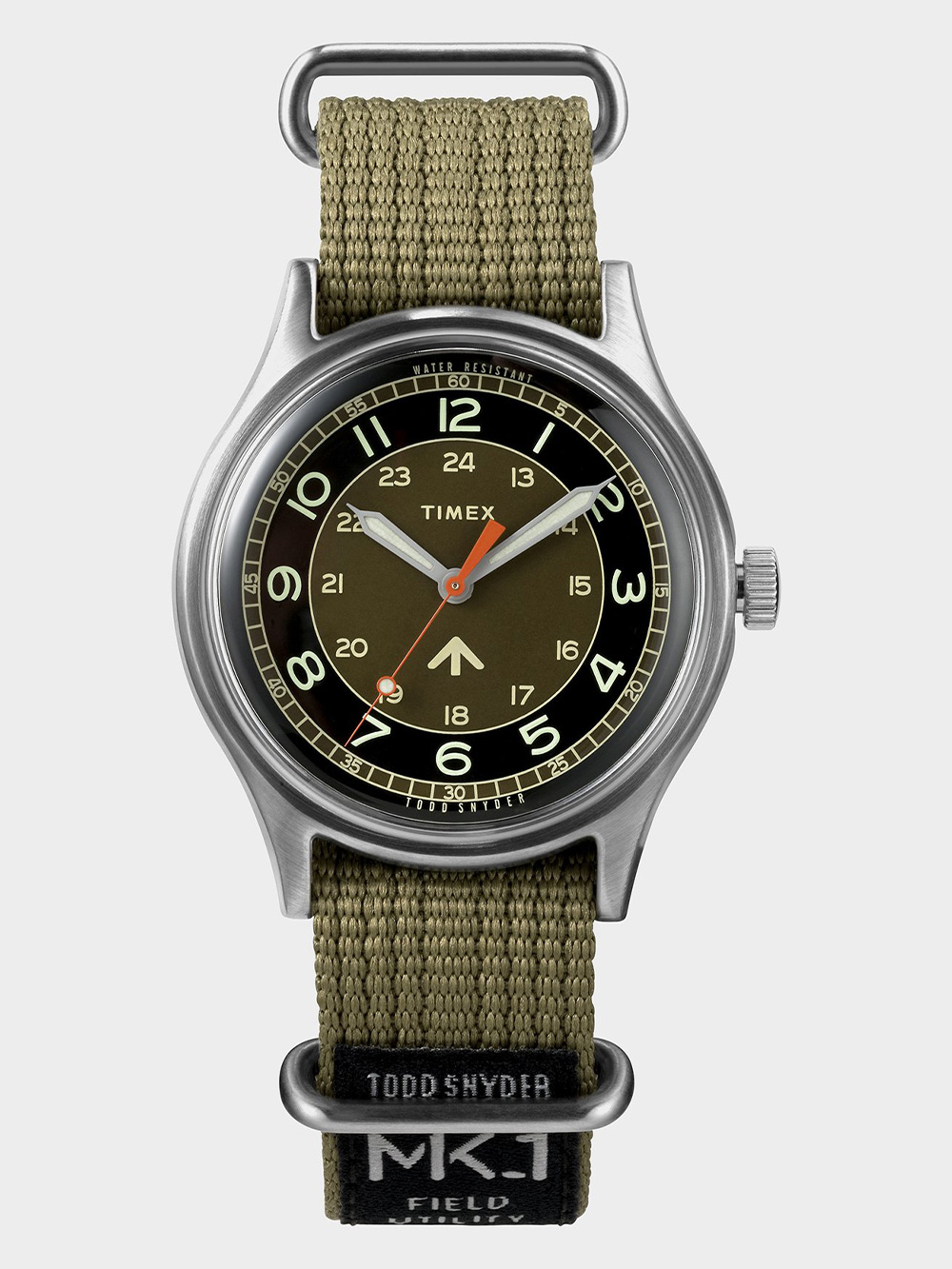 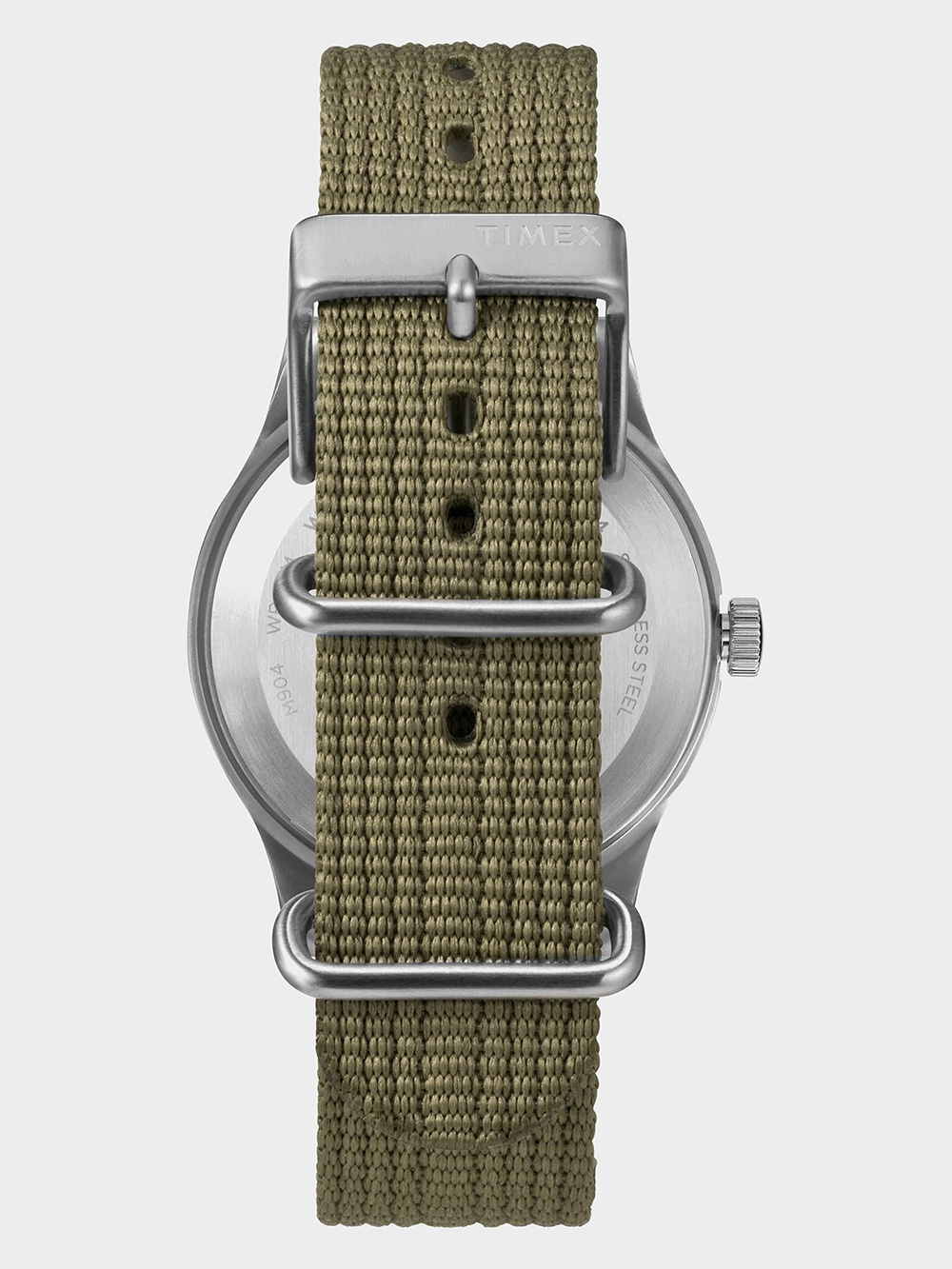 Vintage inspiration is even more apparent on the dial, because the Arabic numerals of the 24-hour scale are depicted in retro-style beige. Although, the dominating colour is the olive drab that fills the central portion of the face as well as the minute track, separated by a black ring that occupies the 1-12 hour markers. The numerals are also laid out in a funky way that follows the bezel without compromising on readability by having 4-8 orientated towards the wearer. 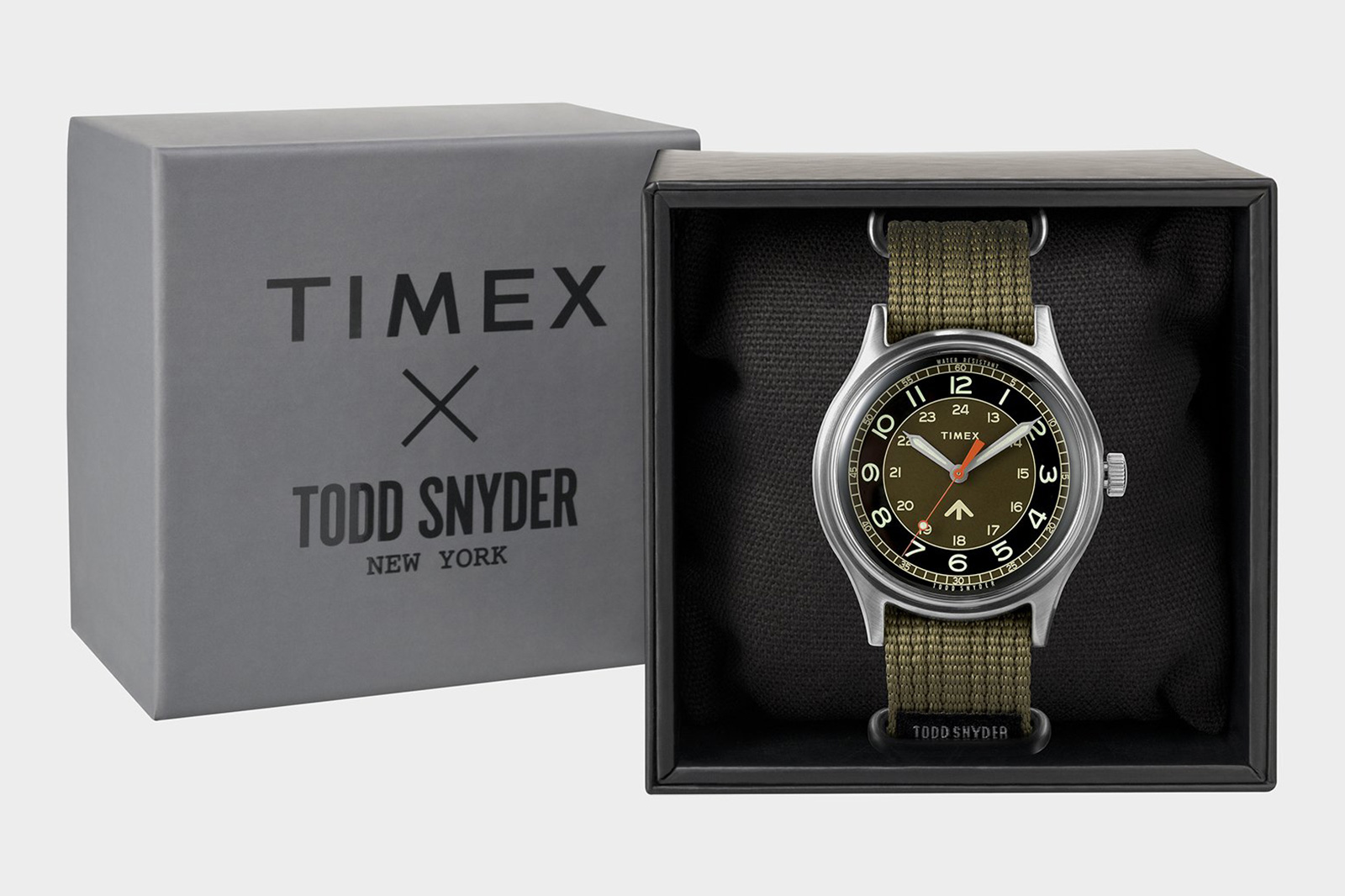 While it would be nice to see it with a mechanical movement, something like the Sellita SW200 at the least, it’s quartz powered. Which isn’t necessarily a surprise with a price tag of only £102, making it ideal as the kind of field watch you actually plan on using, and using hard. Available exclusively from Todd Snyder stores and online.