Dive watches. There are a lot of them. In fact, pretty much every major watchmaker has dabbled in plumbing the depths at one point or another, an obsession that’s certainly not slowed down this year. Still, there’s good reason. Between their macho size and awesome technical capabilities, it’s not hard to see their general appeal. Here though, are some that are far more than a throwaway collection inclusion. Whether you’re trying out your first diving watch, are a seasoned sea-dog or simply like to lounge around the marina, there’s a delicious diver out there for you…

FOR THE GENTLEMAN DIVER

A legendary buried treasure hidden under the wreck of an old pirate ship has nothing on these beauties. They’re the watches for the water-farers of distinction, the diving elite – and they just might be best suited to the marina bar post-dive. 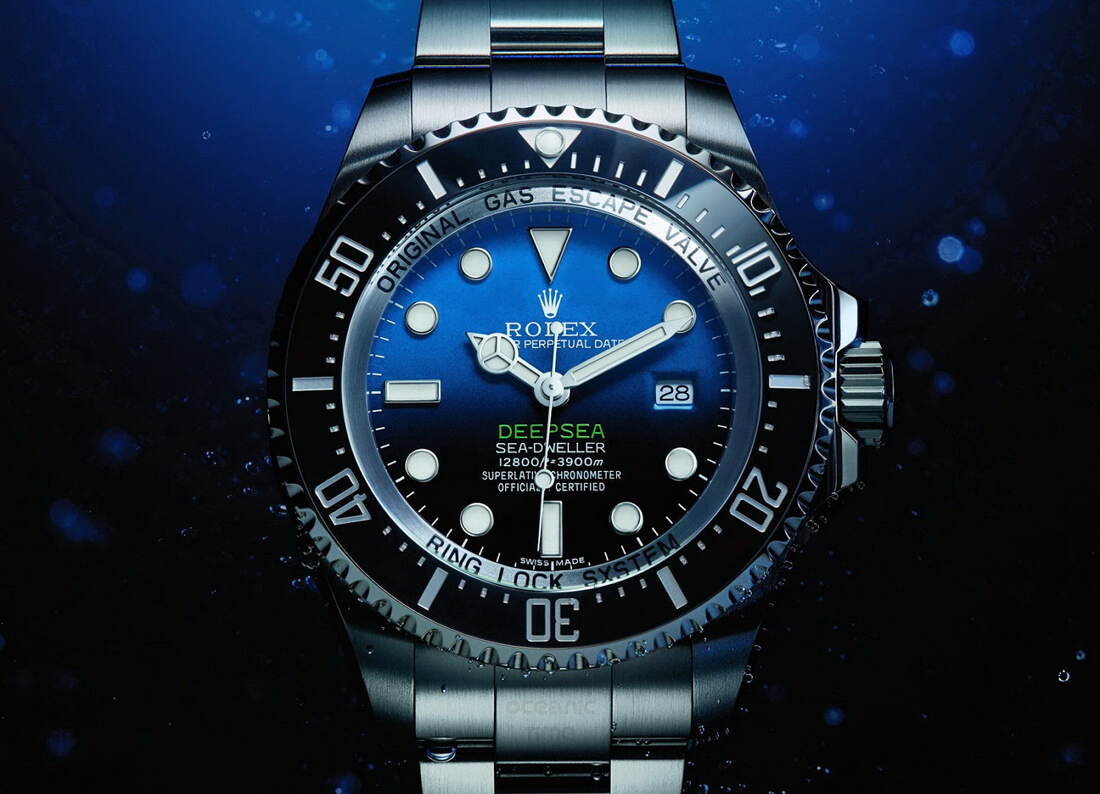 Nearing £10k, you might expect the Rolex Deepsea to be the kind of watch you want to keep out of the water – but that would be a travesty. Every inch of this horological leviathan is geared towards going deeper – to a dark depth of 3,900m. If Rolex has a reputation for diving excellence, that’s in good part thanks to this beast. As overcompensatingly big and bulky as ever, the newest version comes with a cool gradient blue and black dial, a reference to director James Cameron’s dive down the Mariana Trench. Sure, if they released his actual watch, the Deep Sea Challenge, it would sell out in seconds, but for now the Deepsea is one hell of a good compromise. 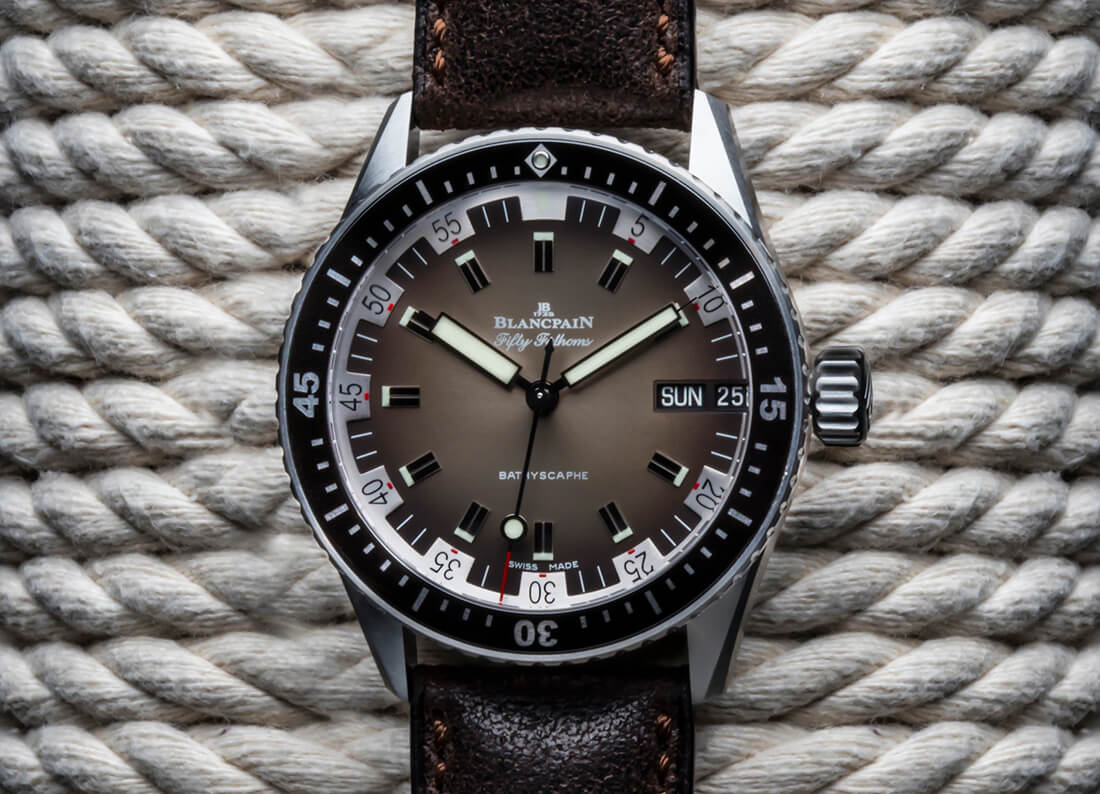 A diving icon, the Fifty Fathoms laid down the foundations of what a modern diving watch is, making it a little ironic that the coolest new model of the year is firmly stuck in the Seventies. The main decade-specific detail is that gradiated dial that looks like it has a touch of vintage fade – and there’s even more if you look closer. The minute indexes and those blocky, rectangular hands, it all points to the same decade. It’s not too trippy – this is Blancpain after all – but it’s an unusual take on a classic diver. A limited edition of 500, it’s also a collector’s piece, so don’t go smashing it along any rocky coastlines, you hear? 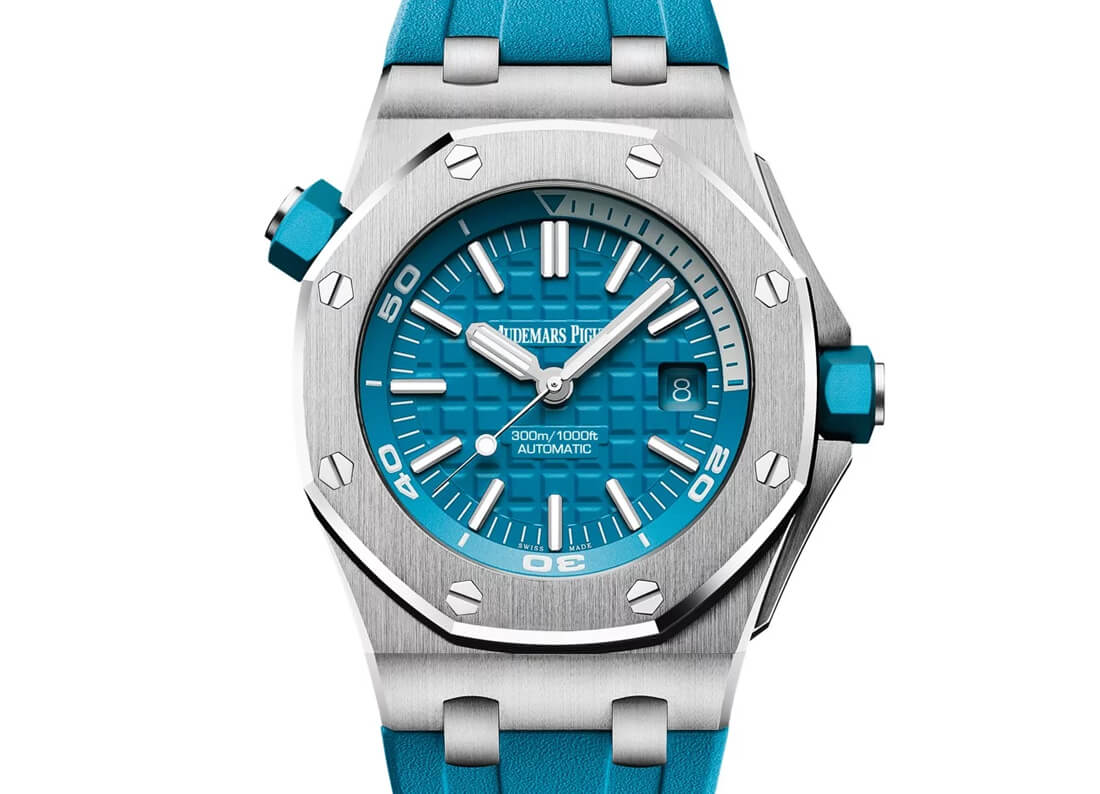 ­Let’s be honest, you’re never going to actually dive with this. No matter its nautical credentials on paper, it’s nearly £17,000! Still, if you did get it wet it can survive well down to the 300m mark, complete with an inner diving bezel, so those fears are probably unjustified. Either way, it’s one good-looking watch – particularly in the latest summer colours; we’re all but enamoured by the tropical turquoise. With a bright flash of colour on the Méga Tapisserie dial and rubber strap, it’s a watch to get noticed wearing. Hell, it can probably be seen from shore while you’re lounging on your yacht, which really is – and always has been – the Off shore’s natural environment. 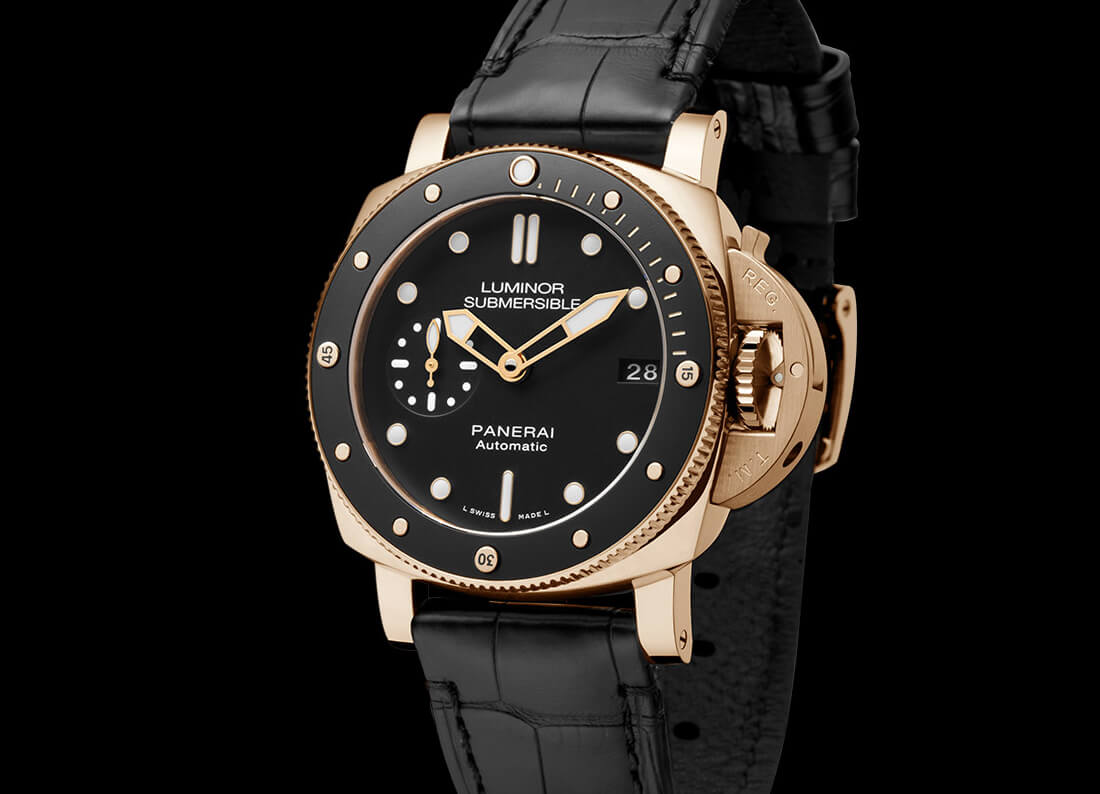 Panerai has always been a bit odd. Their heritage is as an Italian diving watch brand, but their watches have never been particularly… well, good at it. By and large they are not professional instruments, no matter how often they look the part. Then again, that’s not what Panerai is going for; instead, the Luminor 1950 is just a lovely – let’s say ‘diving-inspired’ – watch, in which case why not double down with a bit of gold? The Oro Rosso version is beautiful and, while you’d never take gold diving, its professional-style bezel, large case and 100m water resistance make it a wonderful horological paradox. As someone that likes a diver but prefers to keep their legs very much on dry land, I love it.

FOR THE NOVICE DIVER

Essentially this is baby’s first diving watch. These have the look of a professional, deep dwelling timepiece, without the price tag. Sure, they can still manage some serious depths, but you won’t think twice about abandoning them if you spot a shark. Or a scary bit of seaweed. 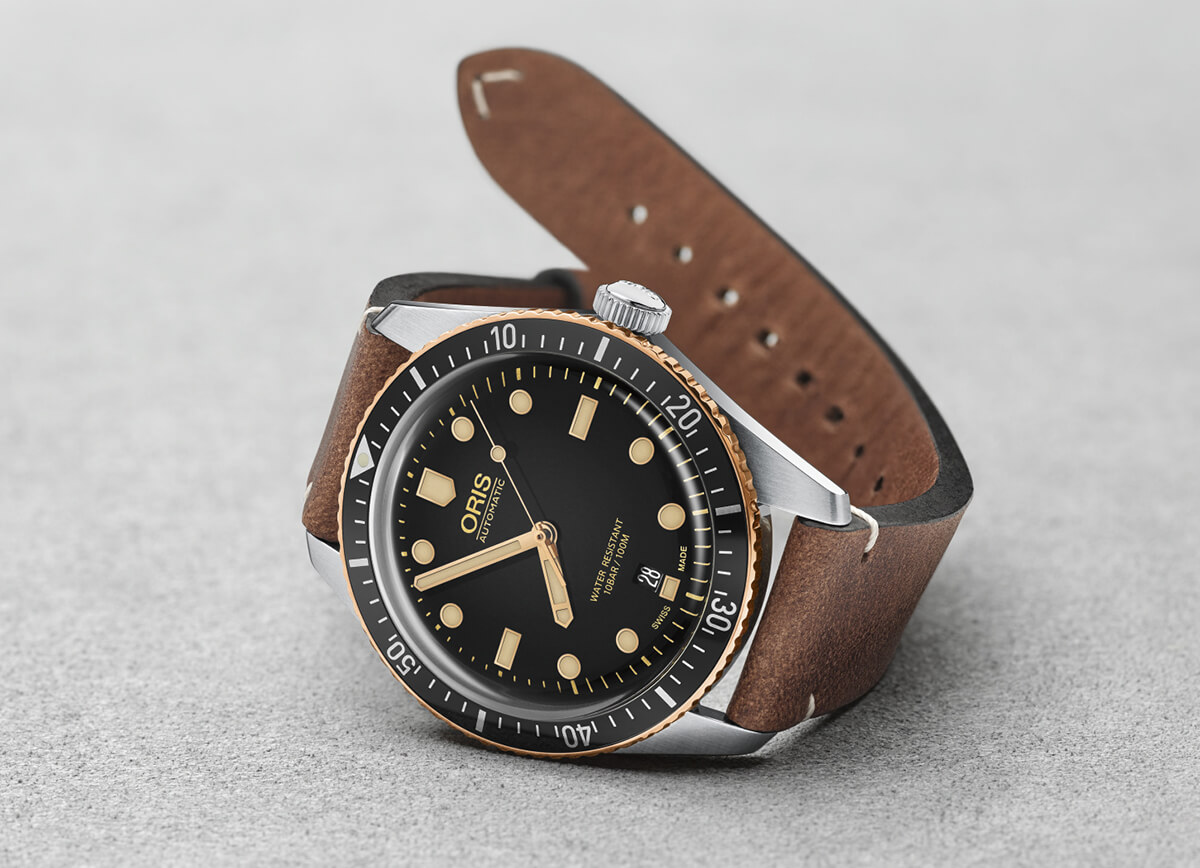 In case someone didn’t spell it out to you, bronze is in nowadays. It seems to be everywhere, whether that’s 30,000 feet up or 300m down, in good part thanks to Oris. Personally, I’m not a huge fan. I’m on board with the idea, it’s just that the look can just be a bit much – except when used in moderation, à la Oris’ new Sixtyfive. Their headlining Carl Brashear limited edition goes to town on bronze, but here there’s just a touch of it set into and around the edge of the bezel.

It’s a stunning little watch. Sure its 100m water resistance isn’t the best, but when you’re lounging at a beachside bar post-dive it looks picture perfect, especially on the fabric strap. 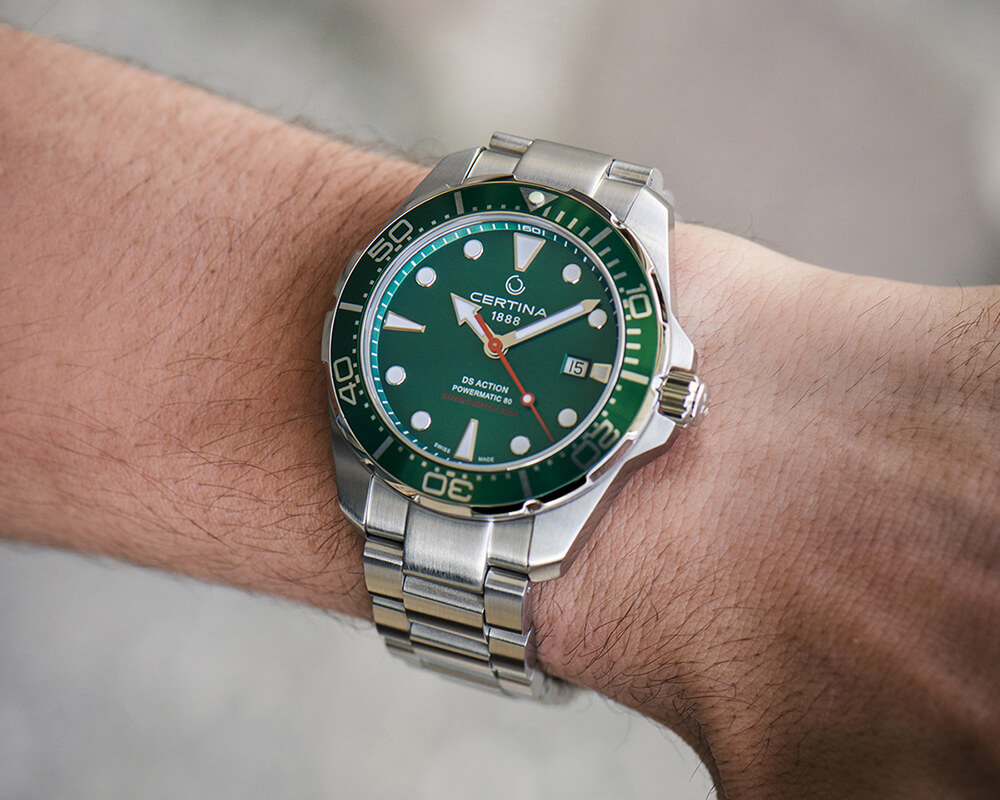 ­‘Entry-level’ isn’t something you want to hear about equipment that could save your life, but take it from us: Certina’s latest diver has everything a professional could ask for. Let’s start with the 300m of water resistance, a uni-directional rotating bezel and plenty of lume across its easy-to-read dial – plus it doesn’t miss a beat of the ISO 6425 standard. Throw in 80 hours of power reserve and you’re all set for a spot of scuba. Admittedly it does look indistinguishable from plenty of other divers out there, except for one thing: try finding a technically superior instrument for under £1,000. You’ll be looking for a long time. Plus it looks phenomenal in green. 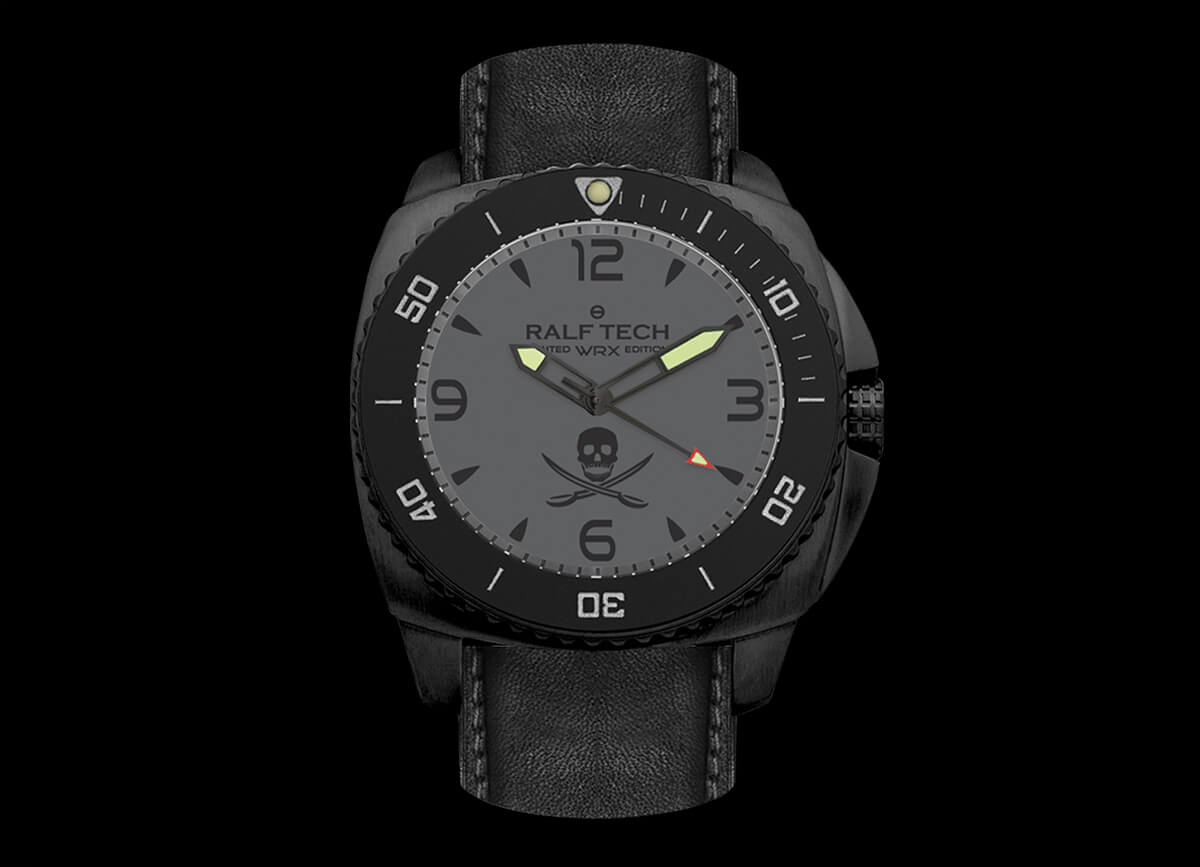 ­It might not look like a pirate’s best friend; but then not all that glitters is gold — and if the vagabond did end up at the bottom of the ocean at least he’d be keeping good time. This 47mm, self-perpetuating quartz beast is water resistant all the way down to 1,000m, and its stealth look is enough to incite both pirates and ninjas to fight over it. With 150 days’ worth of power reserve and a movement that charges its own battery, it should never let you down.

FOR THE PROFESSIONAL DIVER

Now things are getting serious – and you need a serious watch to match. The ocean takes no prisoners after all and if you want to conquer it you need a staunch companion, a reliable navigator of time – a more-than-respectable diving watch. 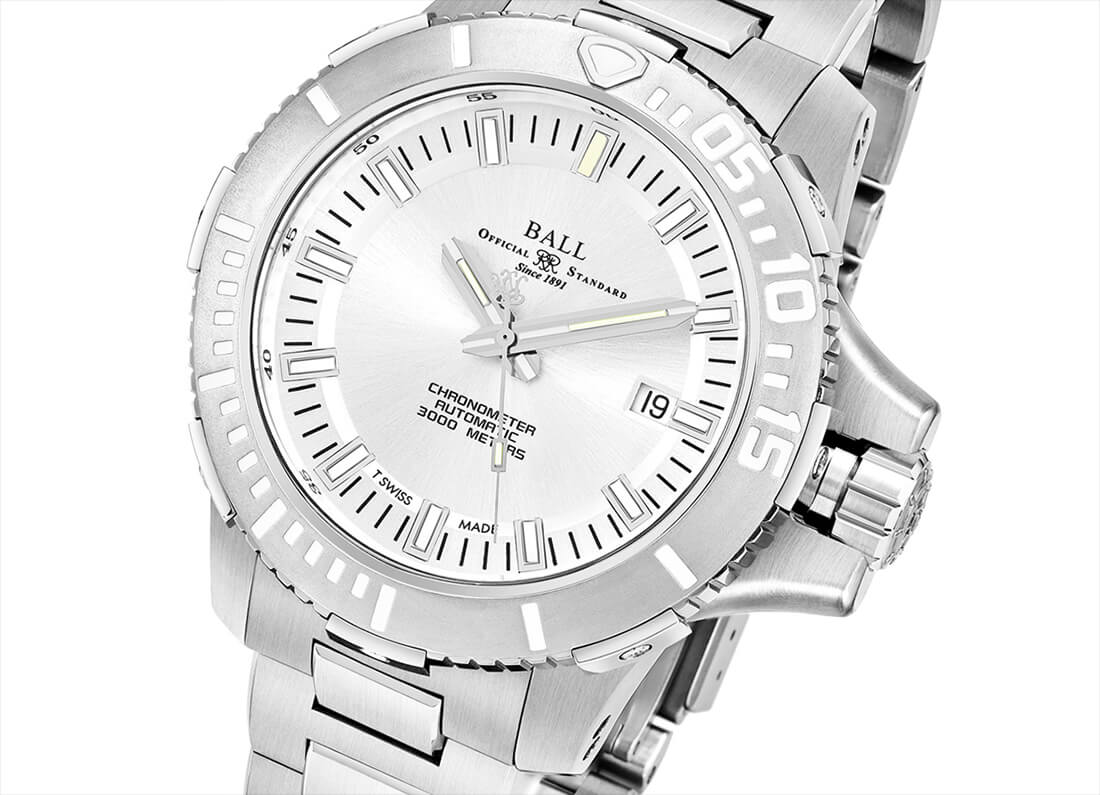 It’s not just the name that suggests some serious performance engineering here. Ball’s beast of a diving watch has greater marine credentials than Trident. It can reach depths of 3,000m, survive some intense crashes and is seriously resistance to magnetisation. Just be glad it’s in titanium; reaching the ocean floor should be a choice, not an inevitability. It helps that, with it’s multi-layered dial and unusual, half-marked diving bezel it looks as good as its specs. 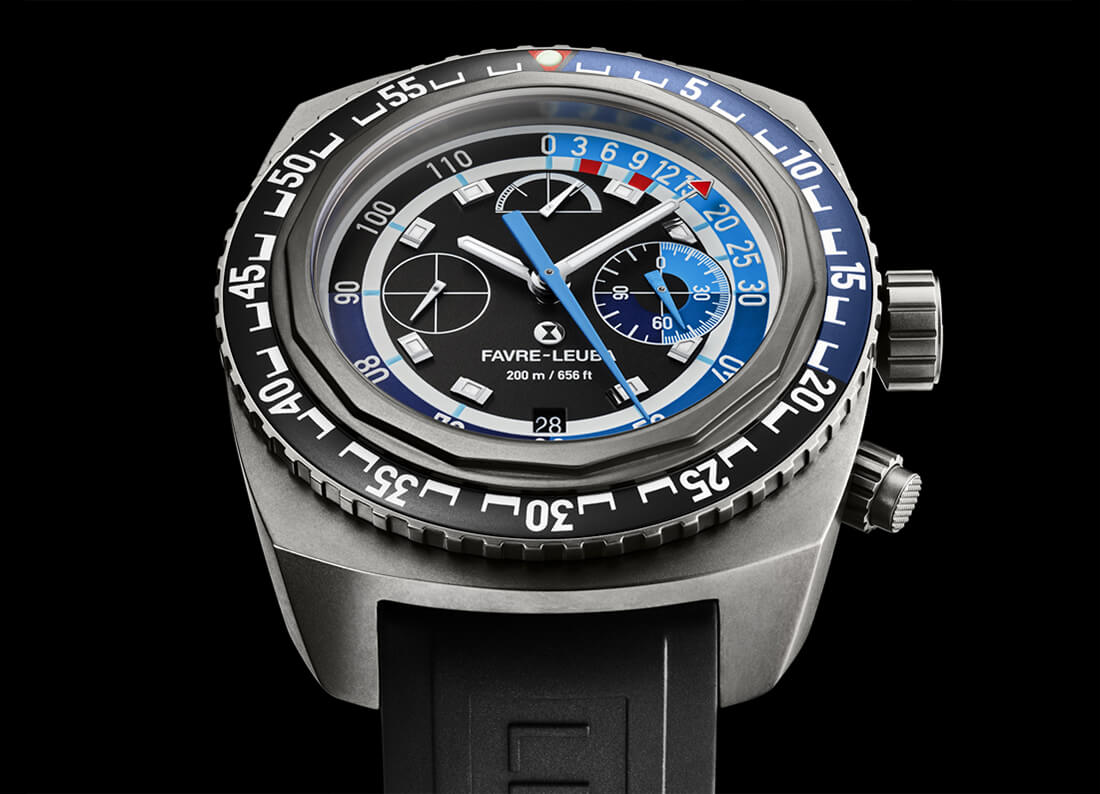 Last year Favre-Leuba went 9,000m up with the Bivouac, now they’re going 120m down. At 48mm it’s a big old watch, but given everything it does that much is understandable. Where the Bivouac included an altimeter, the Memodepth includes its spiritual opposite: the depth gauge. The watch measures your depth all the way down to 120m (giving it the same real-world depth equivalent as most 300m watches), along with markings for the decompression stops on the way back up. Its white and blue colour scheme is seriously cool too, even if it is entirely more diving suit than dinner suit.

FOR THE CAREFREE DIVER

Whimsical certainly isn’t a word you’d apply to yourself but you do like something a bit different – not to mention something you don’t necessarily need to take too much care of. You want something well-priced that you can forget about until someone compliments your individual style. These are for you. 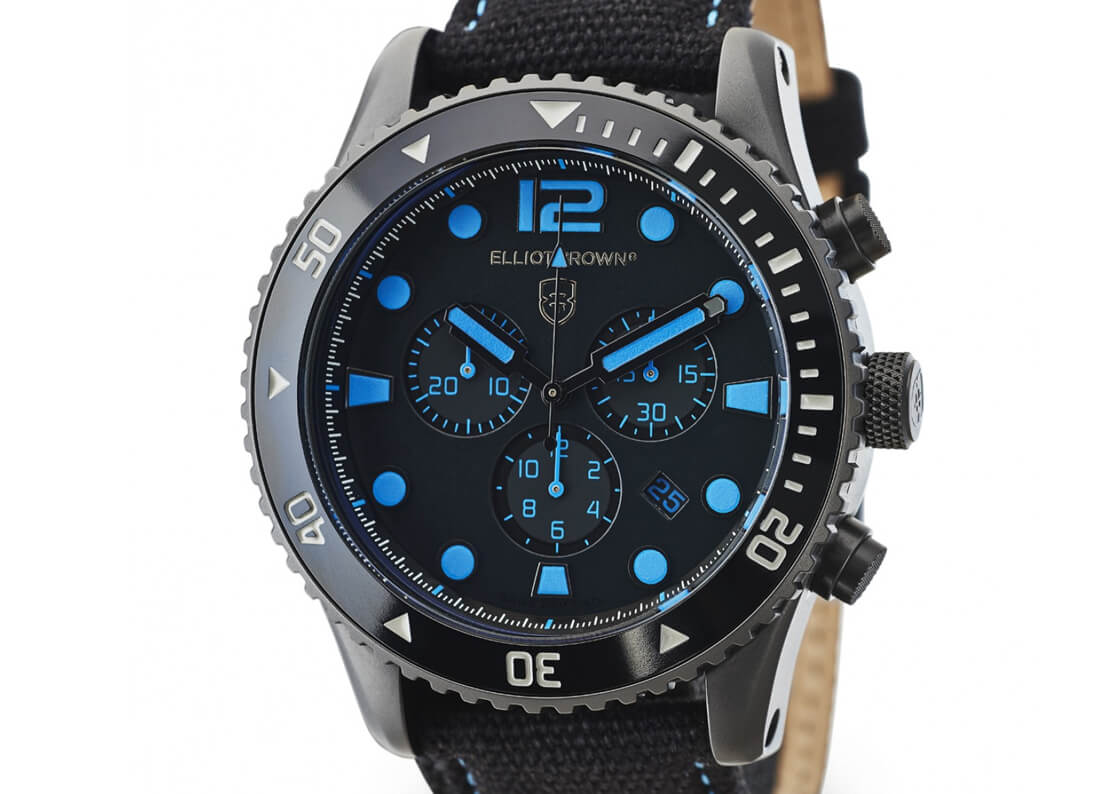 Just because it’s your first diver doesn’t mean you can’t make a statement. Hell, quite the opposite; you can have some fun with it. While Elliot Brown’s exceptionally priced (£495) Bloxworth comes in a few more classical diving colourways, our favourite is by far this black (and cyan) beauty. The blue doesn’t glow as brightly as white, but you won’t be going too far down, despite the 200m water resistance. And let’s be honest, it’s very, very cool. 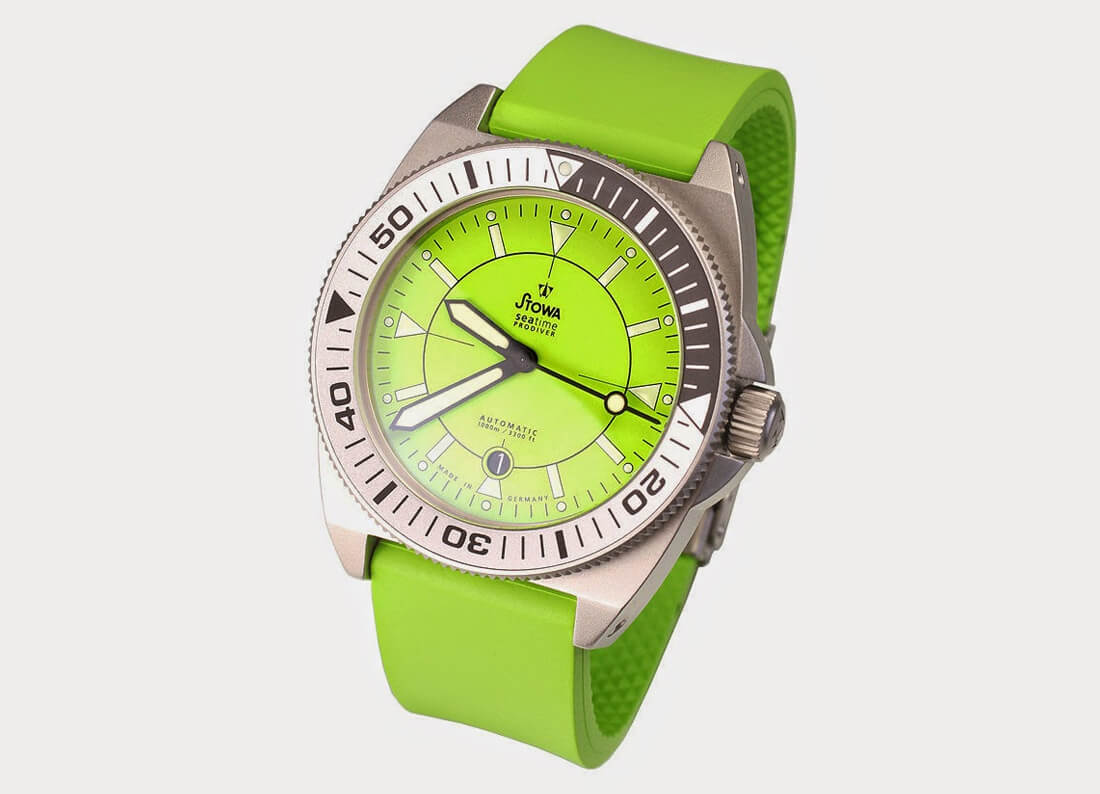 With a water resistance of just over 1000m you might expect Stowa’s award-winning diver to be in the next section. Then again it’s only 1,320 Euros (just over £1,150) so you don’t need to be a professional to take a punt on it – not bad at all for a performance mechanical watch. Oh and in case you didn’t get where the name comes from… the dial is very, very green. Not all divers need to be black or blue after all, and if you’re diving around a coral reef why not sport a bit of tropical flavour of your own? 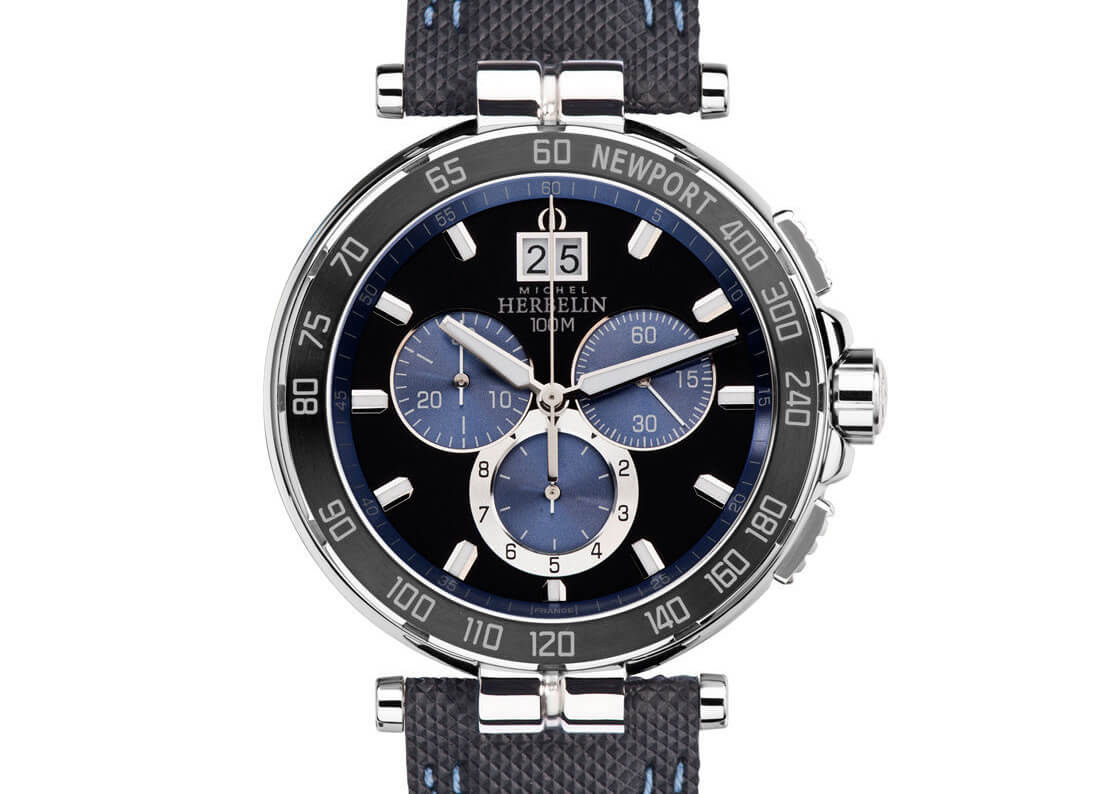 When so many diving watches look pretty much homogenous, it’s good to see something a little different. The perfectly round 42mm case is a nice change from its contemporaries more faceted cases as are the straight lugs. Throw in some contrasting royal blue subdials and you have a seriously cool, entry-level diver. It’s quartz and has a water resistance of 100m but it’s hard to complain at something that’s just £670; www.michelherbelin.co.uk