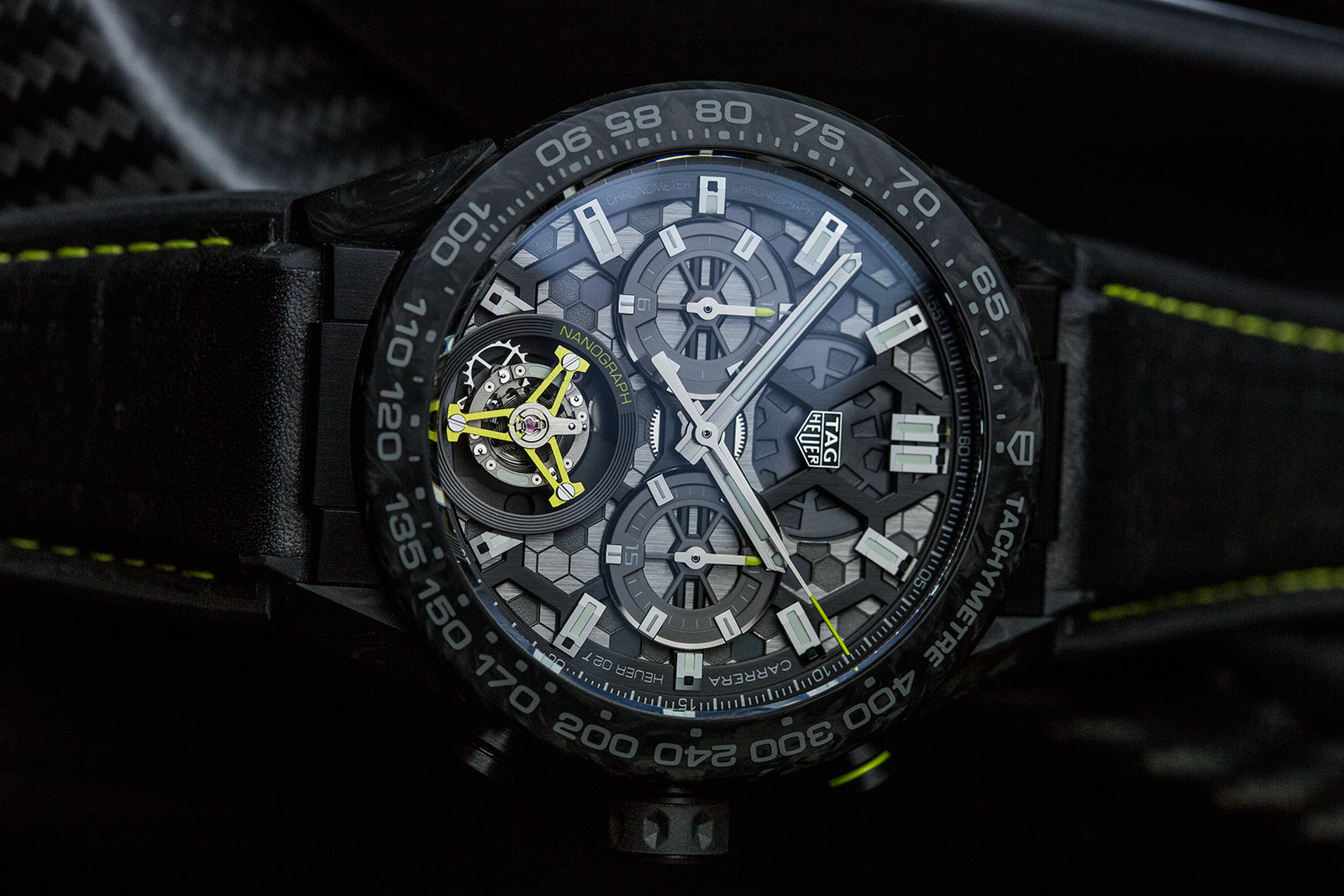 I’ve always admitted the Carrera. Sure the Monaco has a bit more iconography around it, but TAG Heuer’s first racing watch is still one of the purest automotive-inspired pieces out there. The problem is that I always found myself gravitating towards the older models – the simpler, retro takes on the watch and the straight-up reissues, rather than the modern crop.

In fact I’ve never really been a huge fan of the contemporary Carreras with their openworked dials and performance looks. I’ve always thought them just a bit much; a bit busy. The Carrera Calibre Heuer02T Nanograph may have just changed my mind. There’s nothing classical about it of course; in fact, it’s the most cutting-edge thing TAG Heuer has ever produced, bar the occasional concept. A big part of that is the incredible openworked dial with its hexagonal pattern penned in black and silver. At first glance it looks similar to TAG’s recent Aston Martin tie-in with the Carrera Superleggera, which boasted a dial imitating an Aston grille. 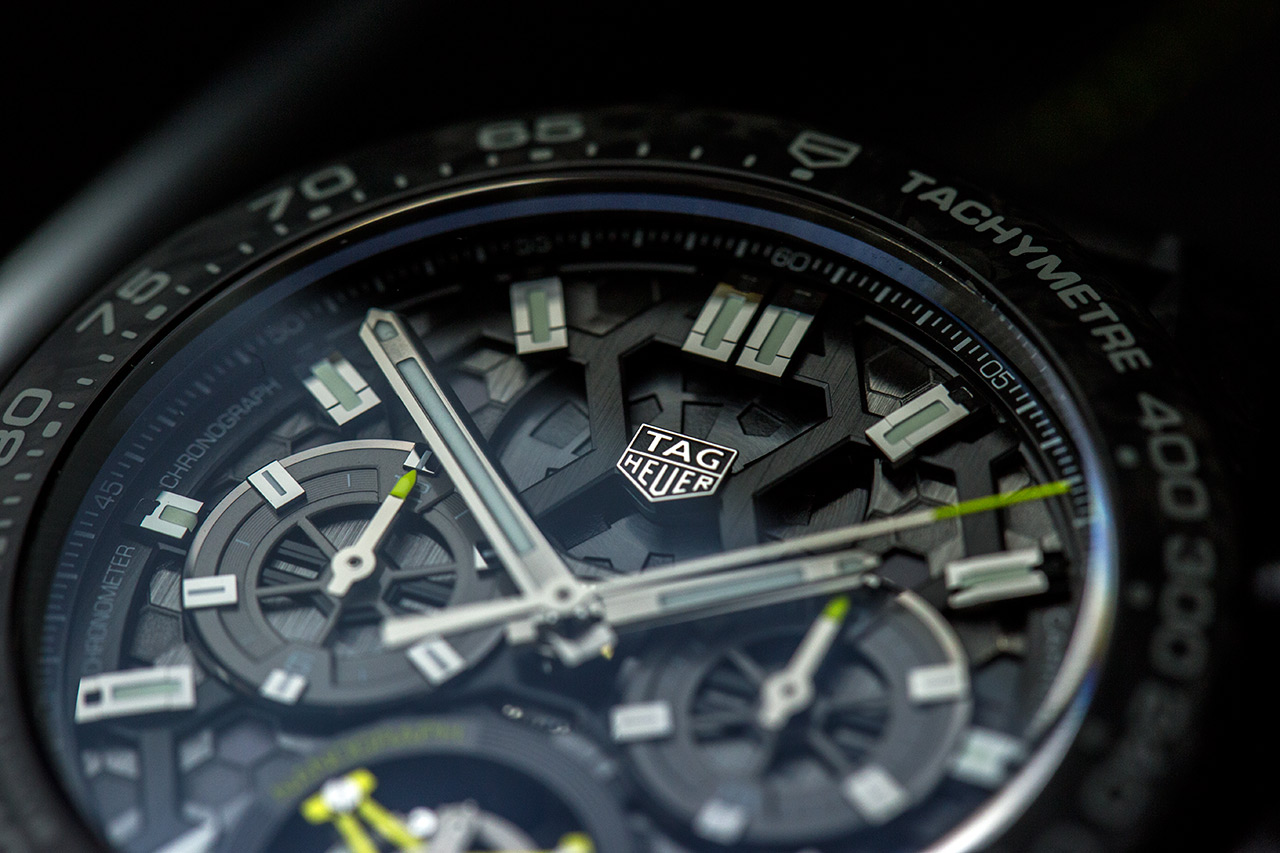 Here, there’s nothing automotive about the dial. Instead, it hints at what makes this piece not just cool but unique: its hairspring. The hairspring is arguably the most important part of the watch, hence watchmakers trying snazzy new materials out like silicon. TAG Heuer’s version uses carbon.

First, a lattice of carbon atoms is built, essentially the framework of the spring. This is then filled with free-moving carbon atoms at incredibly high temperatures. The result is the most shock-resistant spring to ever hit the market. It also shares the same benefits as silicon, being both anti-magnetic and consistent in production. In short, it’s (apparently) the best hairspring ever.

It’s less extreme than Zenith’s reinvention of the movement but a bit more palatable too. Still, like the original Defy LAB only time will tell if it makes it to proper production. Given the Zenith Inventor made it, the TAG has a good shot. 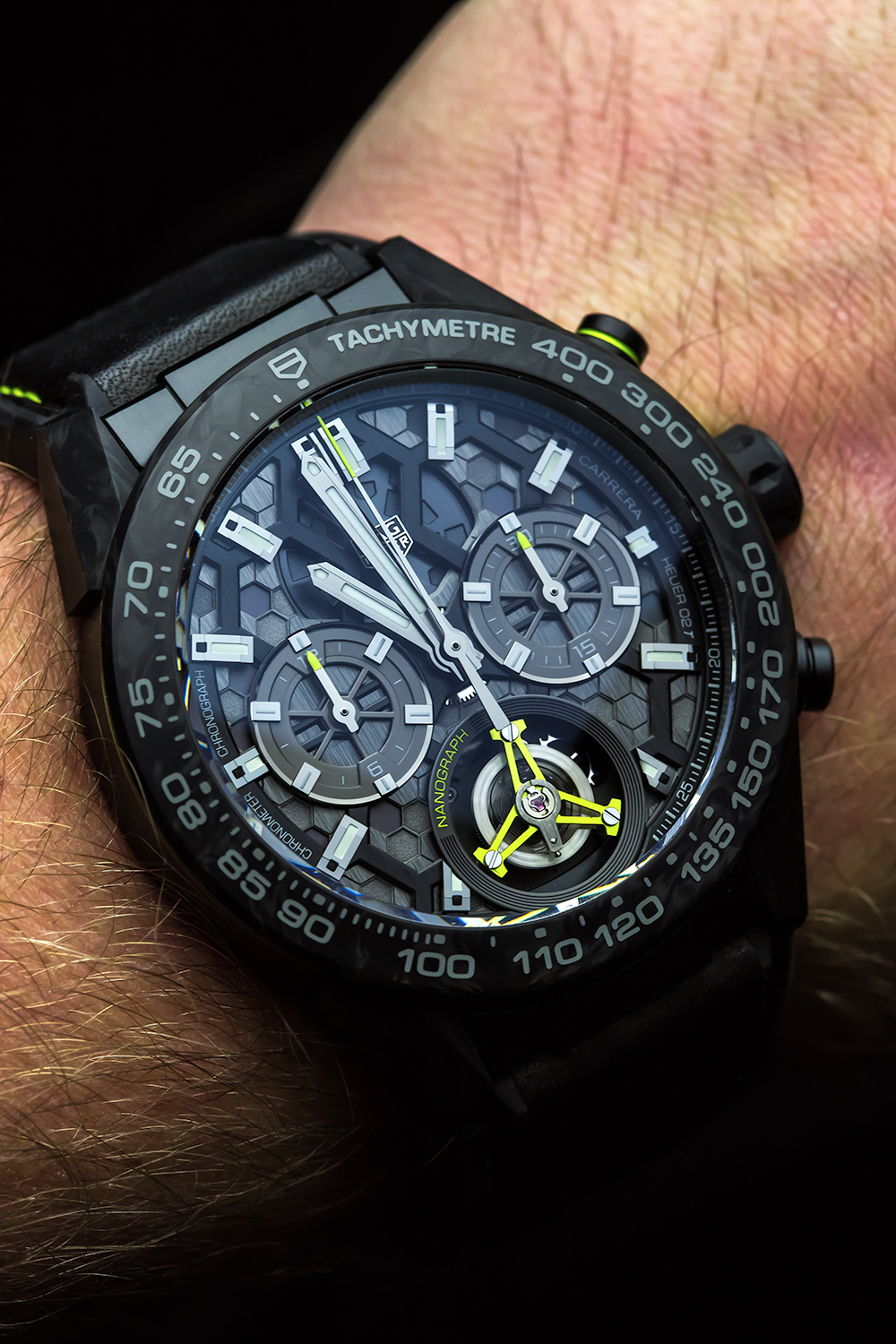 Back to the watch itself though. At 45mm it’s a bit of a beast; it actually feels its size, despite the main body of the case being black PVD titanium. You’d think it’d be nice and light, but nope. Maybe it’s the forged carbon lugs and bezel, though I’d never want to get rid of them. They make a nice textural contrast to the unrelieved black.

The chronograph isn’t the nicest to use in the world; the button presses just aren’t as satisfying as plenty of others, particularly at this 20k price range. It does the job though and the 1-minute flying tourbillon at 6 o’clock is a nice bit of spectacle, highlighted with one of the thankfully rare flashes of yellow across the watch. I love a bit of yellow, but some watchmakers really need to tone it back sometimes.

The strap is pretty much perfect. On the front the black leather and contrast-yellow stitching matches the watch in every conceivable way; on the back, rubber means that it stays comfortable even in warm weather. As that’s apparently what we’re approaching, it’s perfect.

I’m still a fan of the classical Carrera, the Nanograph hasn’t changed my mind on that. But as far as contemporary racing watches go, I’ve not found one I enjoyed wearing quite as much as this, weighty or not. The fact that it has a cutting-edge hairspring is the icing on the horological cake.