1. A Smarter Take on House Shoes

Yes, we know your team can’t see your feet on your daily video call with the office, but mentally, there’s something about wearing shoes that puts a person in a more professional mindset – even if that’s just at your laptop at the kitchen table. Go for a pair of louche, Seventies-style slip-ons that’ll instantly make you feel smarter, stand taller and, when all this is over, convert nicely into superb summer shoes (if you want to let them out of the house, that is). 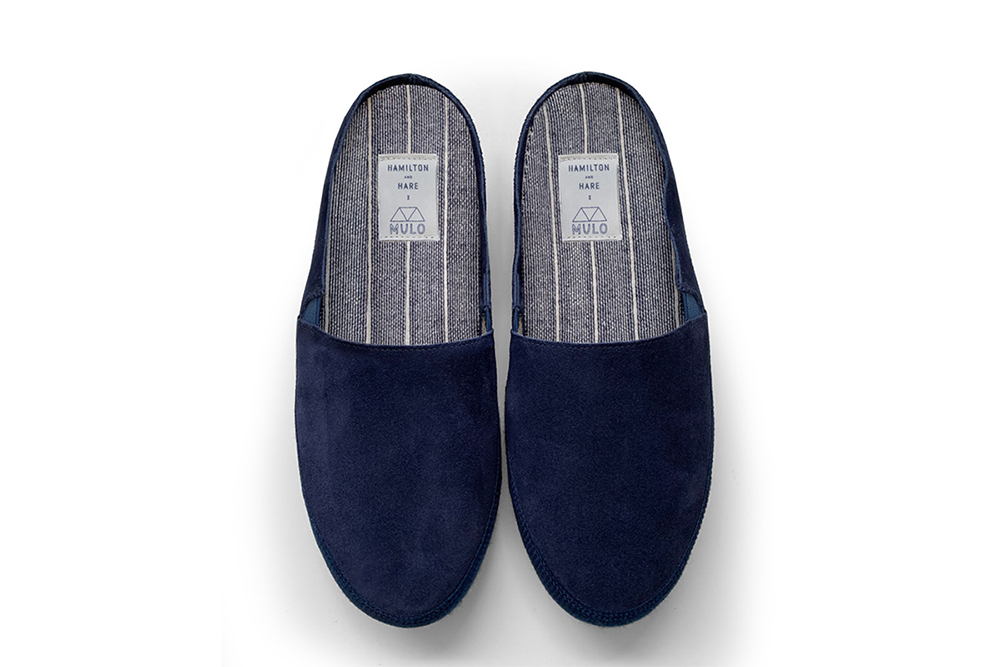 British espadrille-maker Mulo has teamed up with loungewear-master Hamilton & Hare on a summer suede remix of its backless mules. With a cushioned footbed and shearling-lined toe box, these slip-ons will keep your feet warm and supported from sun-up to sun-down. 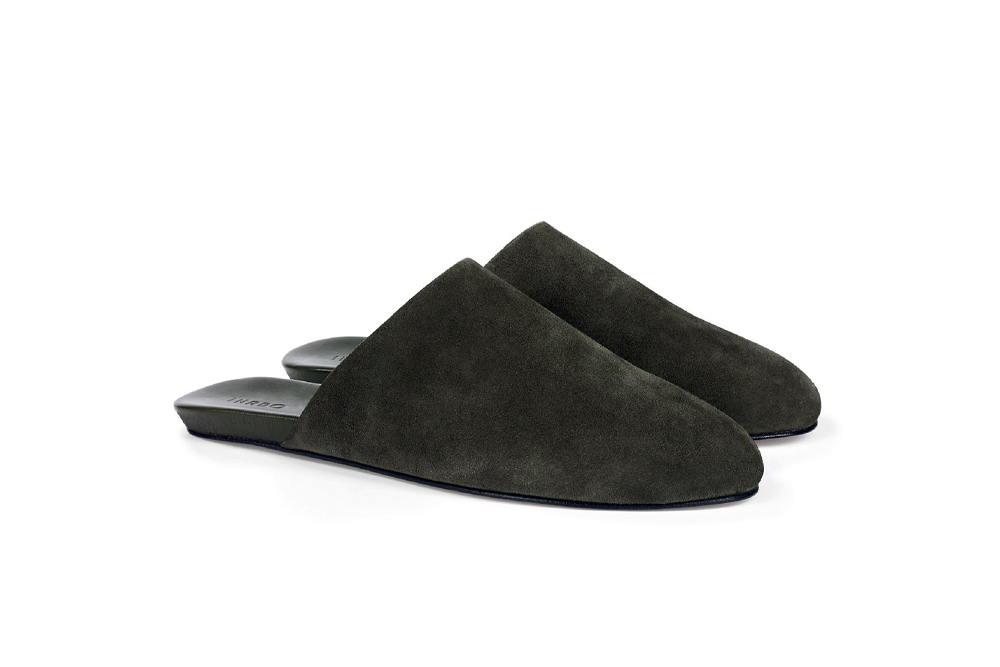 Swedish shoemaker Inabo has re-imagined traditional Moroccan babouches for indoor life. Cut from army-green suede with a leather sole and supportive footbed, these slippers make a day shuffling around the house feel as sophisticated as possible. 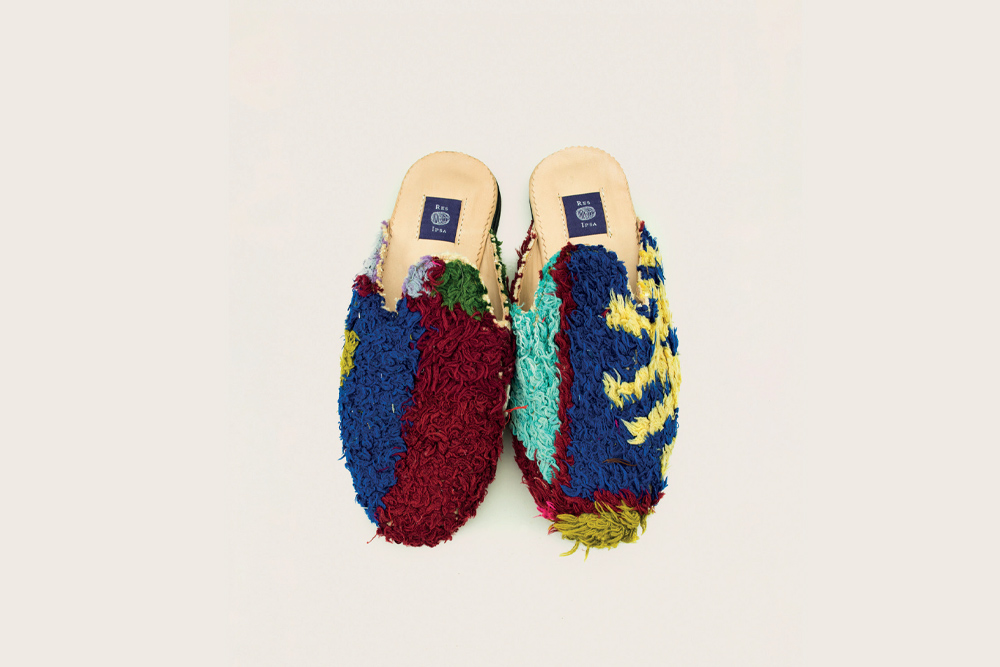 Founded by two lawyers bored of the uniformity of their daily, well, uniforms, Res Ipsa is an American shoe brand inspired by travel. These Babouche slippers (each unique) are made in Morocco and made from rugs woven by members of the Berber tribe in the High Atlas mountains. 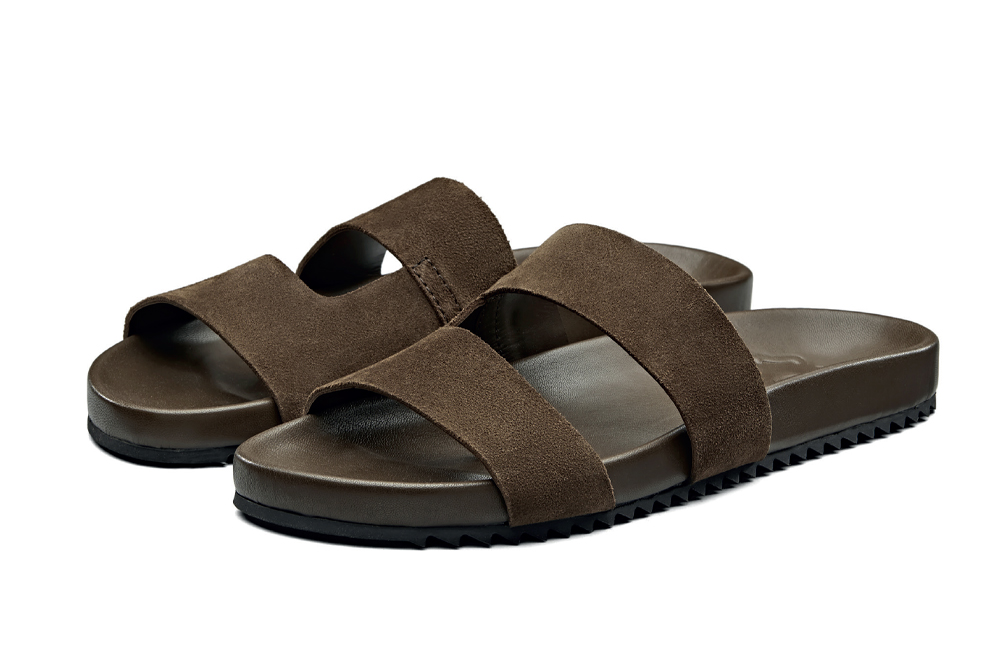 If you want a shoe that will translate to the great outdoors after lockdown, look no further than Grenson’s sliders. Cut from sleek, chocolate brown calf leather, they’re slicker than a Birkenstock and will look just as good with a cosy pair of thick cashmere socks as they will all by themselves with your jeans and button-down after all this is over. 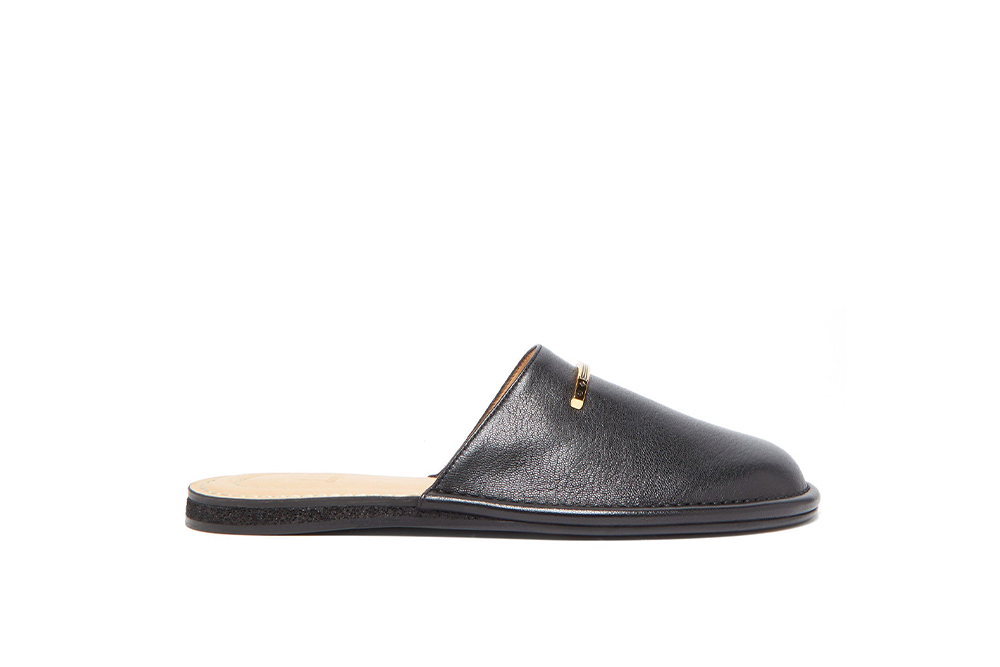 Like the lovechild of a loafer and a slipper, these gold-plaque, backless leather mules from Dunhill were made to bring a laid-back feel to your smartest tailoring– but we say, do it the other way around and use them to jazz up any work-from-home vibe you’ve got going on today. 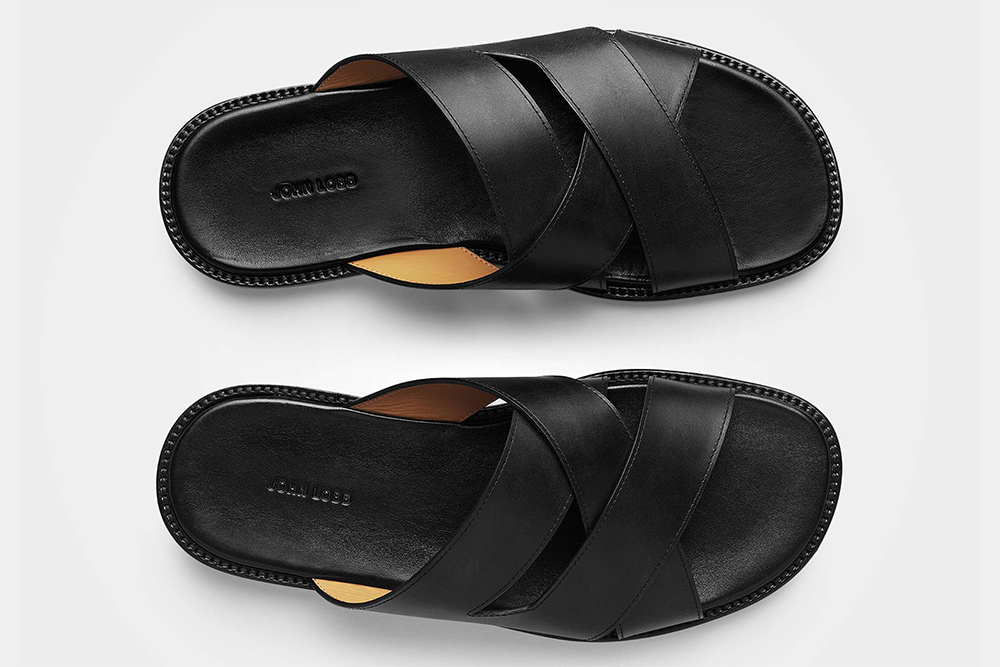 These Northampton-made sandals from John Lobb combine time-honoured English craftsmanship with signature European streamlining. Upload a background of St Tropez, slip ‘em on and pretend you’re on the French Riviera at your next Zoom meeting.

2. The Casual Shirt You Haven’t Thought About

You’re probably not in the mood to go the full semi-cut-away collar and tie right now, but equally, you want to wear something a bit smarter than a T-shirt on your morning office check-in. The solution lies in a popover, which has a half-placket of buttons to the chest rather than the whole way down (aka the only bit that can be seen on a Zoom chat anyway). Slip it on, roll up the sleeves, and get to work. 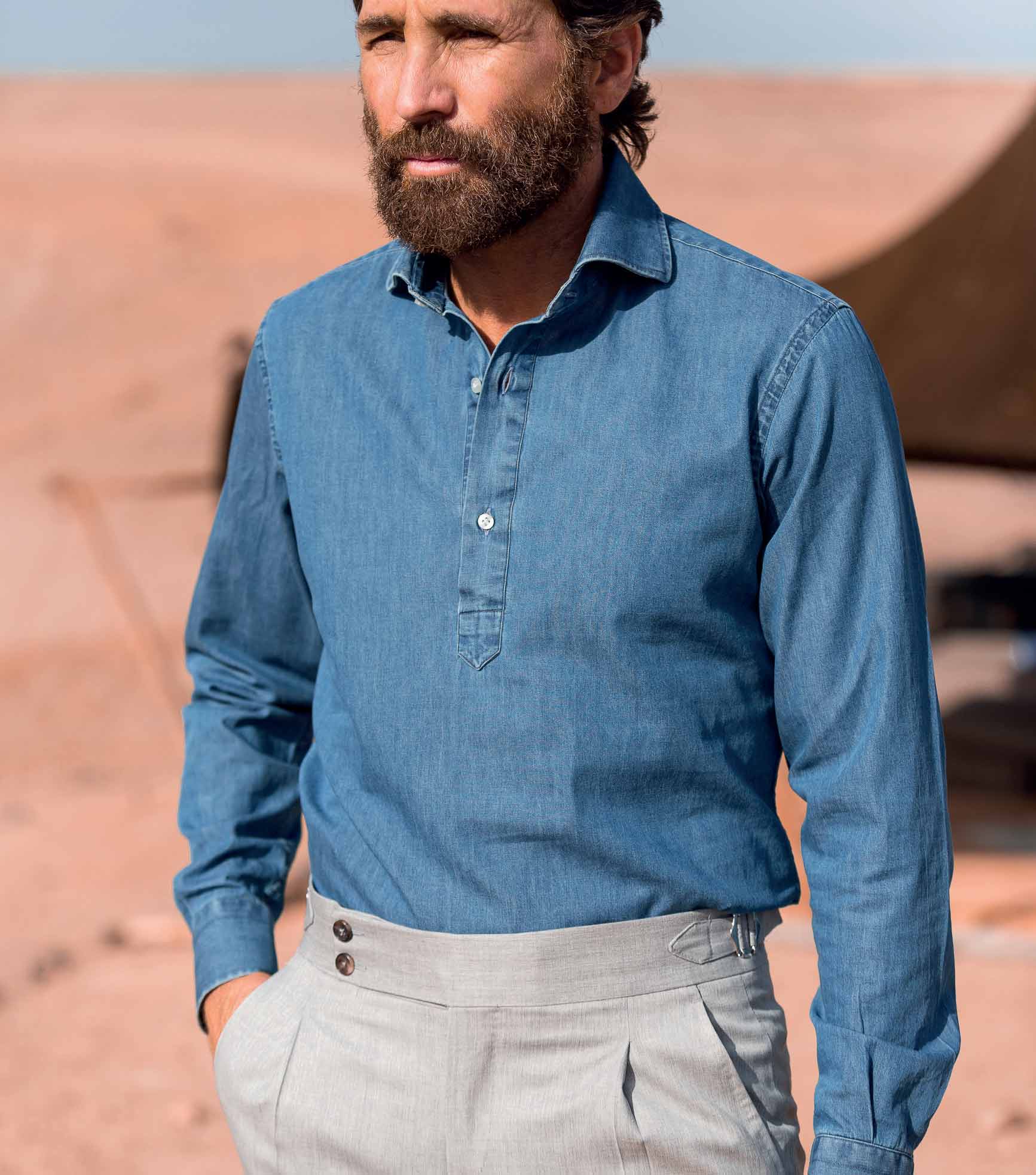 It might come as a surprise that the smartest model on our list is cut from denim, but hear us out. With its more tailored fit, elegantly curved cuffs and more formal Windsor collar, this is a popover that will slip effortlessly under your suit on Casual Fridays when the office reopens. 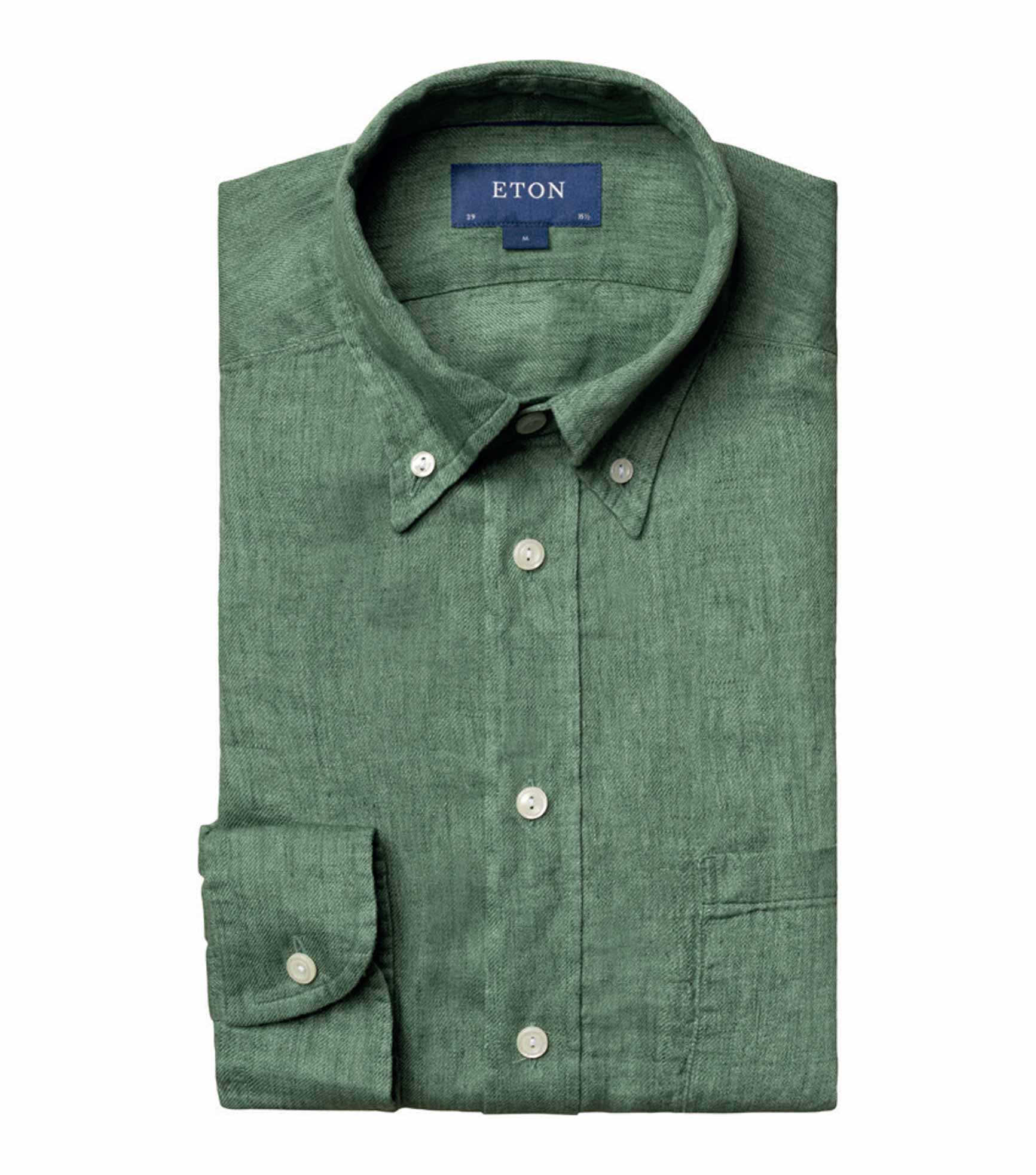 Known for its crisp business shirts, Swedish label Eton takes a more casual approach with its linen twill popover, which is cut 3cm shorter than its regular shirts to ensure it sits at the perfect length when worn untucked. 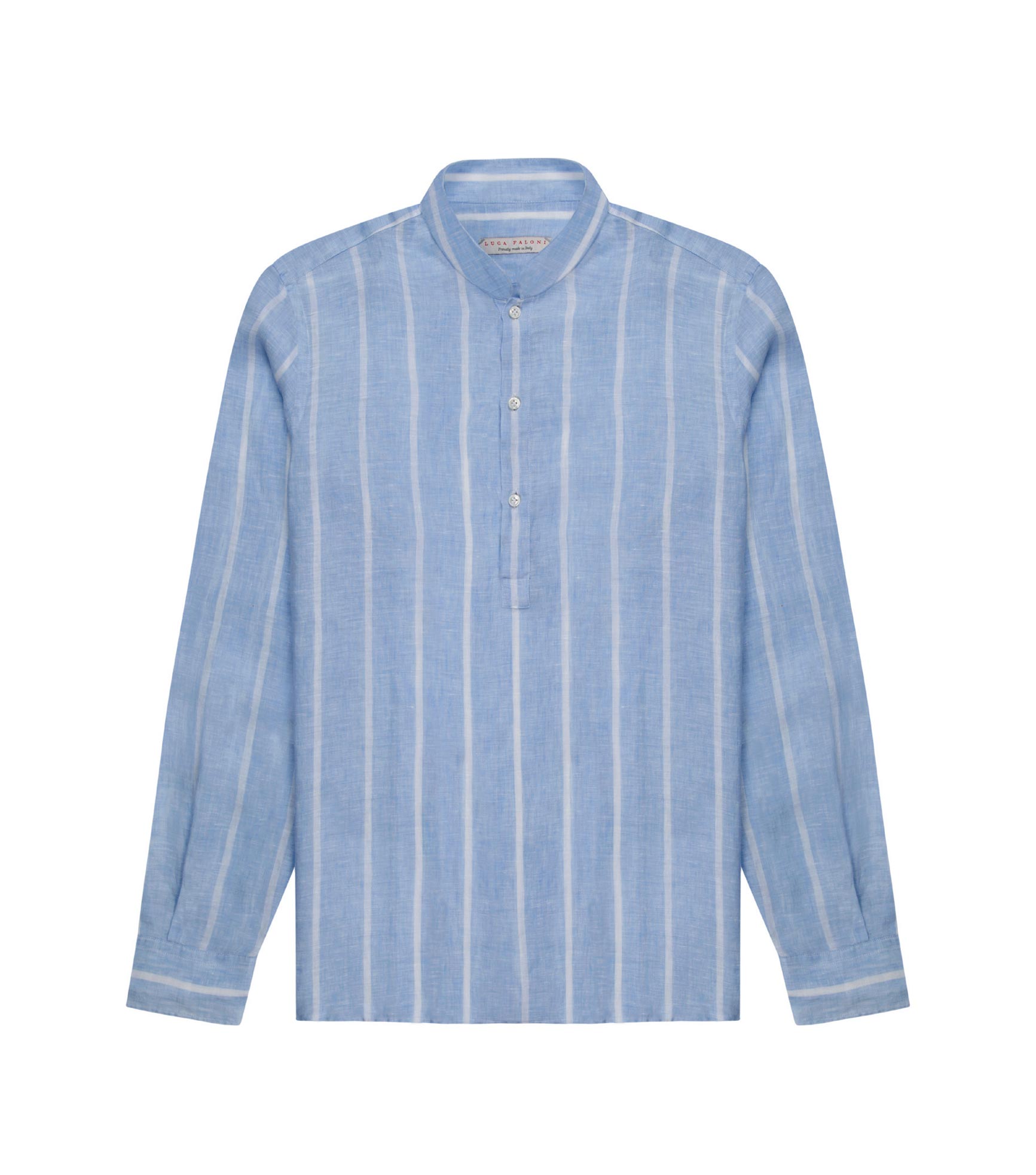 Luca Faloni founded his workshop in Bergamot, Northern Italy with the sole purpose of making pieces of the highest quality and craftsmanship. This popover is a prime example, cut from fine Italian linen and finished with mother of pearl buttons. 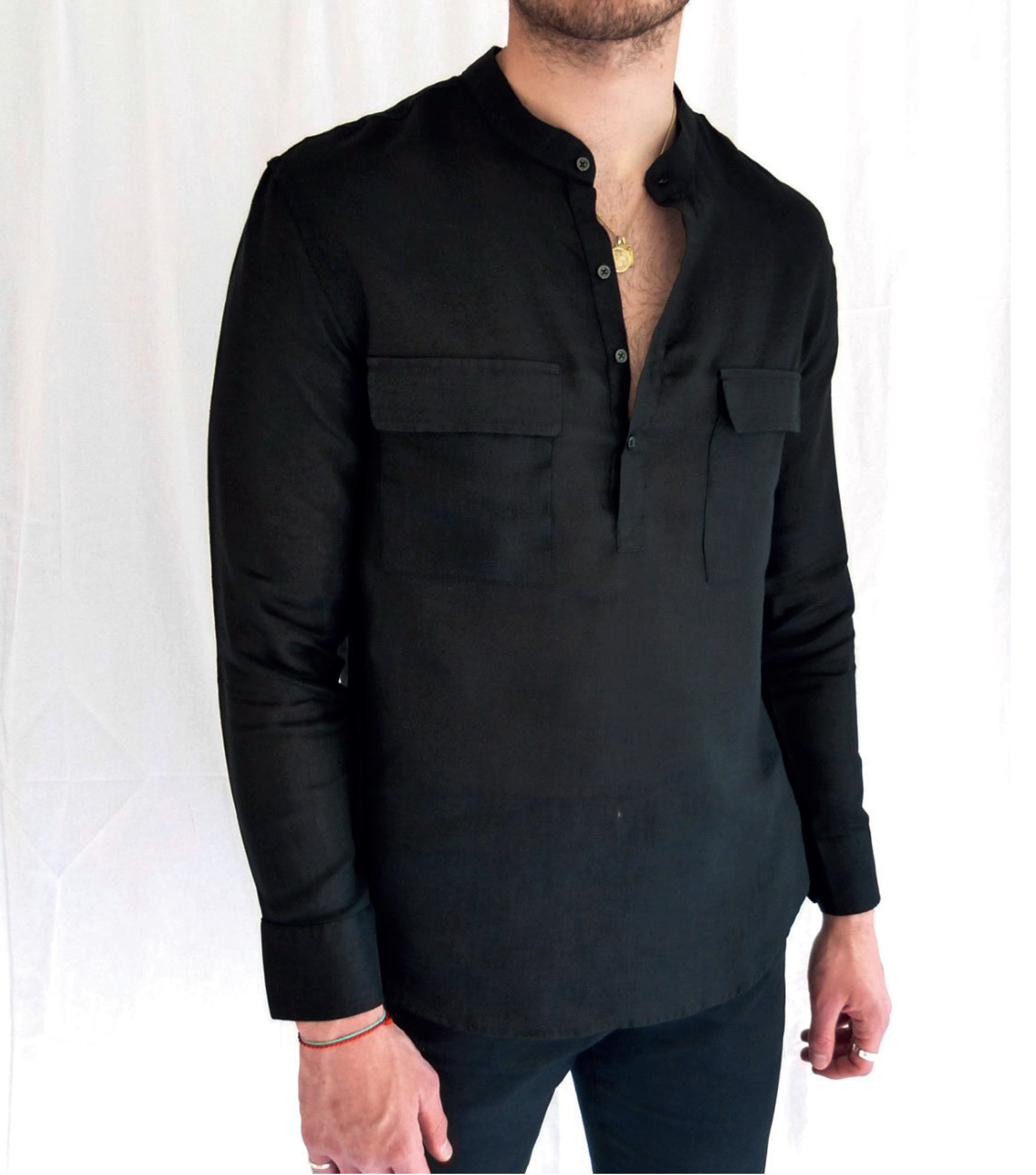 Established in London by two brothers, Samuel and Nicholas, this label only makes three products at a time. Its latest drop is three popovers, each in different colour linen with a different pocket combination. The black iteration, with safari shirt-style flap pockets, is a particular highlight. 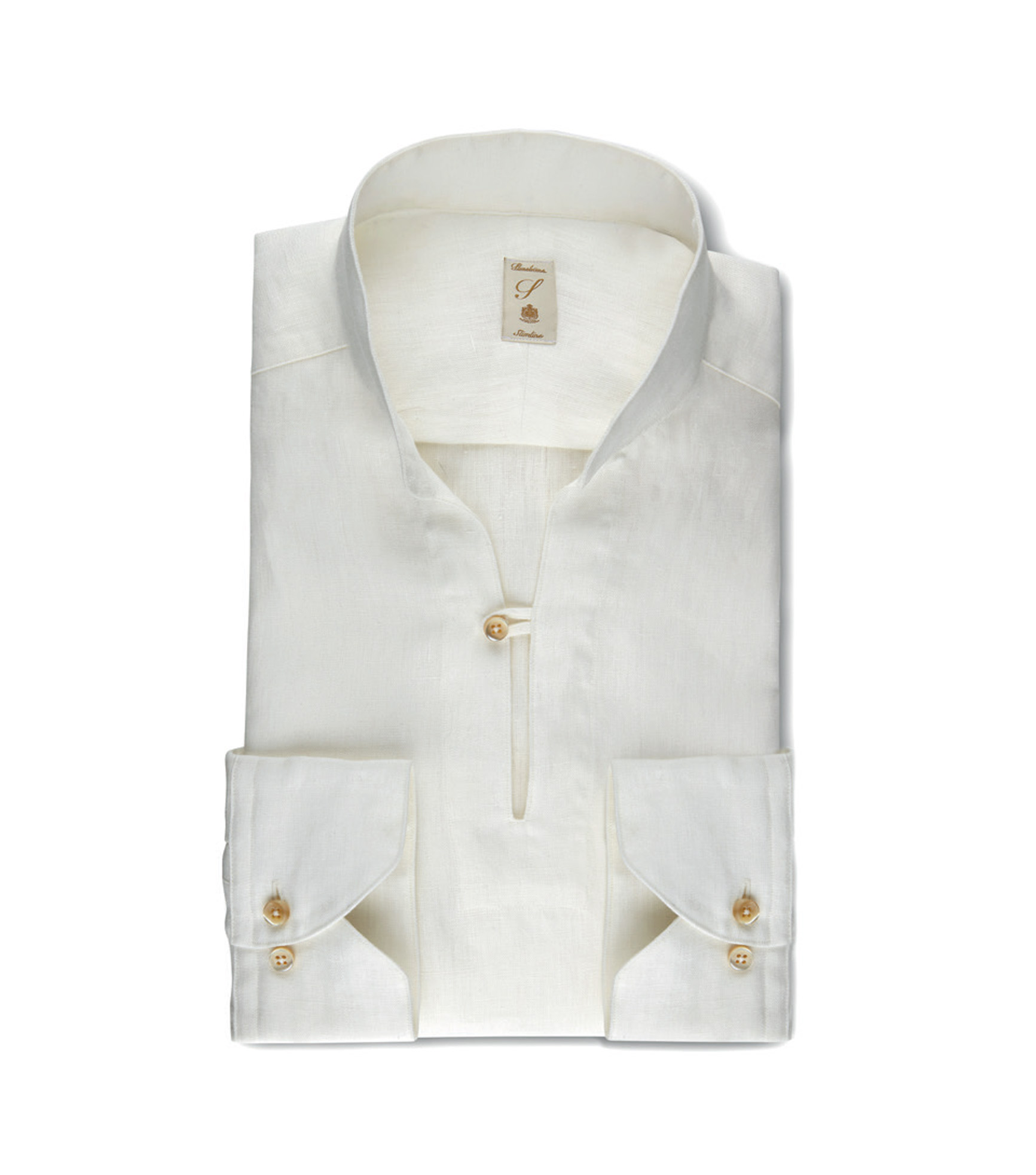 Bringing Seventies style in spades, Stenstrom’s take on the pop-over combines a tailored cut with a kaftan vibe thanks to its combination of a Mandarin collar and single button closure.

If you’ve spent your career wearing a tailored two-piece suit, now’s the right time to relax that dress code right down. Wearing a suit at home feels a little ridiculous, even if you are at work, but you can still preserve that sense of having a no-nonsense ‘work uniform’ by swapping it out for a tracksuit – one crafted from beautiful materials with a cut just as trim as your tailoring. 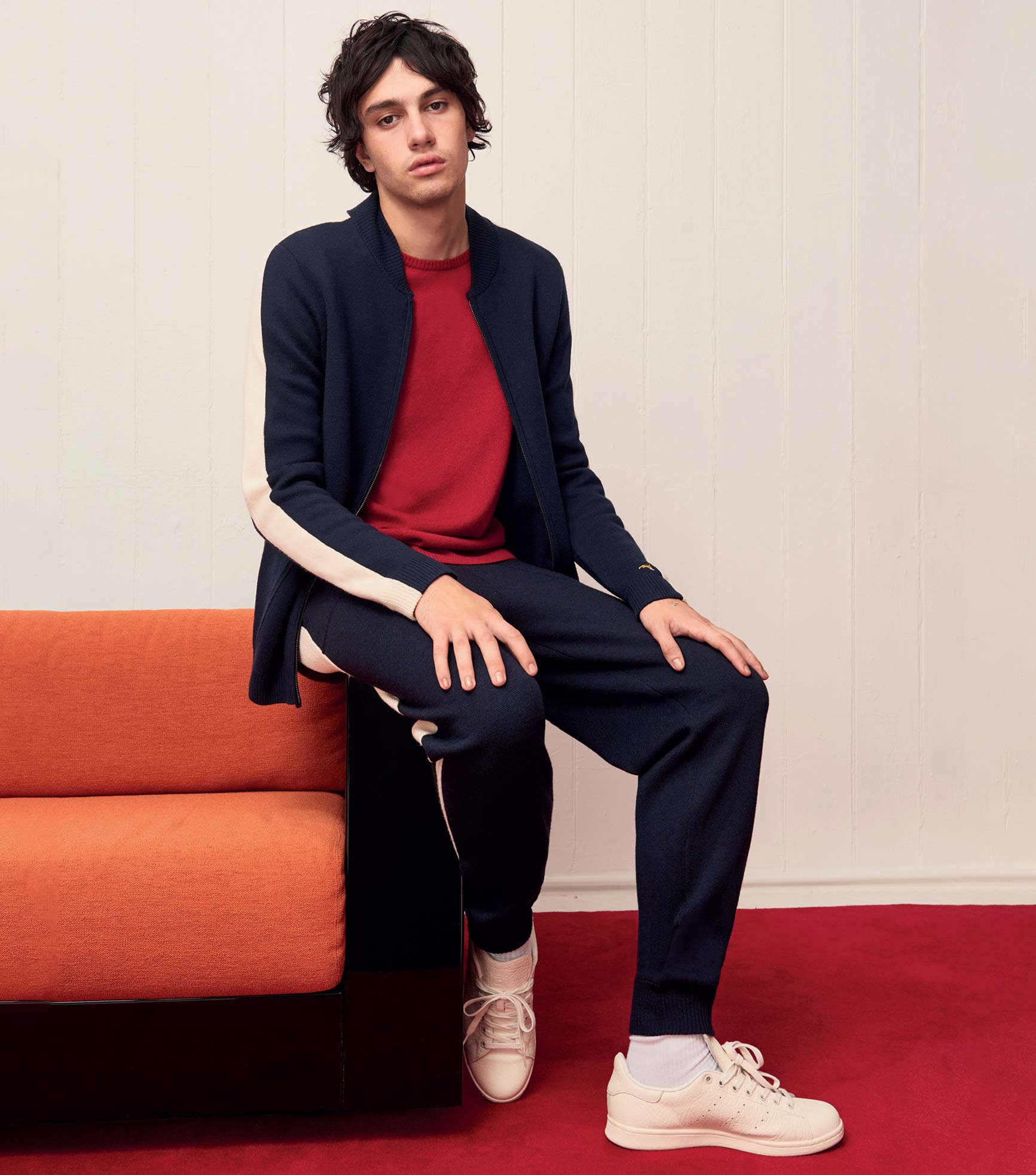 This paired-back, navy blue take on a classic go-faster tracksuit is incredibly sleek and minimal – in fact, the only ornamentation is the Bella Freud logo, a dog drawn by Bella’s late father Lucian based on his favourite whippet, Pluto. 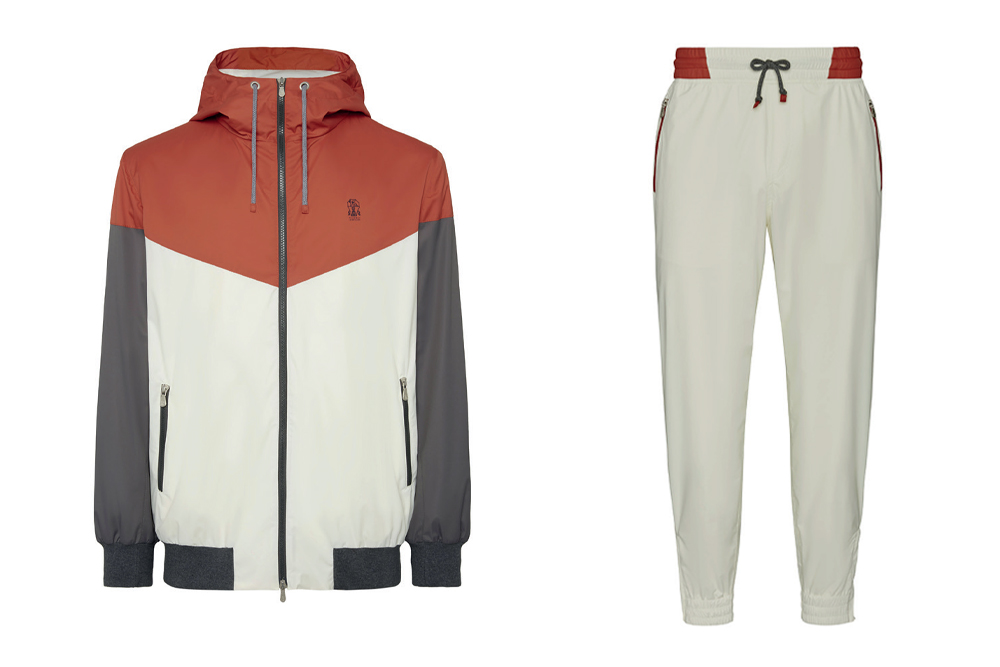 Remember those shell suits from the Eighties? Well, this isn’t it. This one from Brunello Cuicinelli, made in the brand’s Solomeo workshop, might be made from that trademark lightweight nylon, but the geometric design in calm grey and white with a burst of soft, sunset red is a tracksuit that could only have come out of the Italian countryside.
Shop. 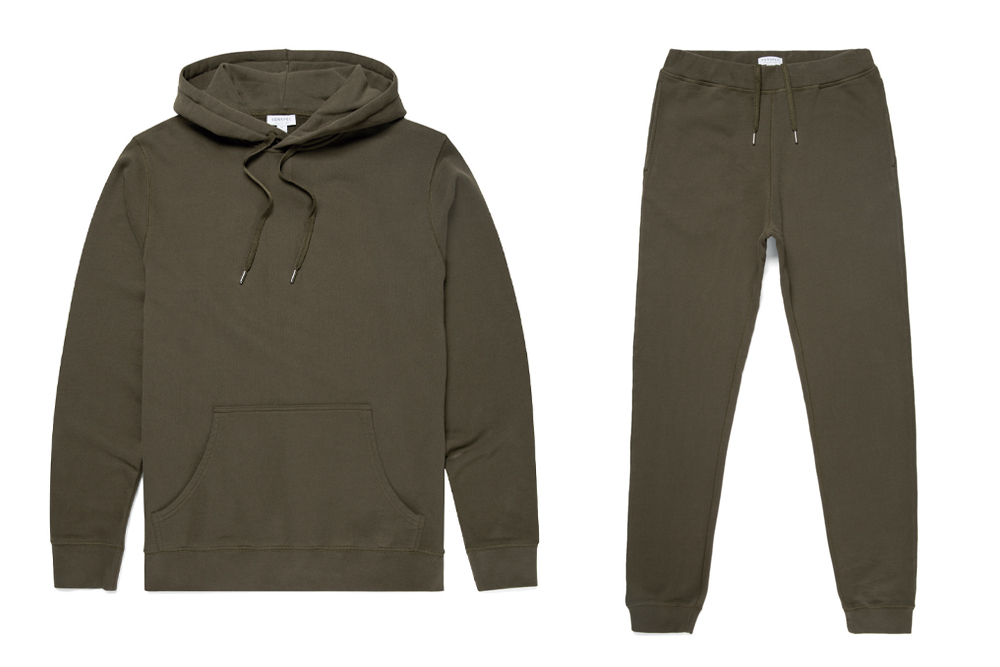 British brand Sunspel has made a name for itself crafting wardrobe staples that may look simple, but are beautifully detailed upon closer inspection. Take this olive-green tracksuit, which is finished with metal aglets as well as a double-faced hood so no lining will show when it’s down. 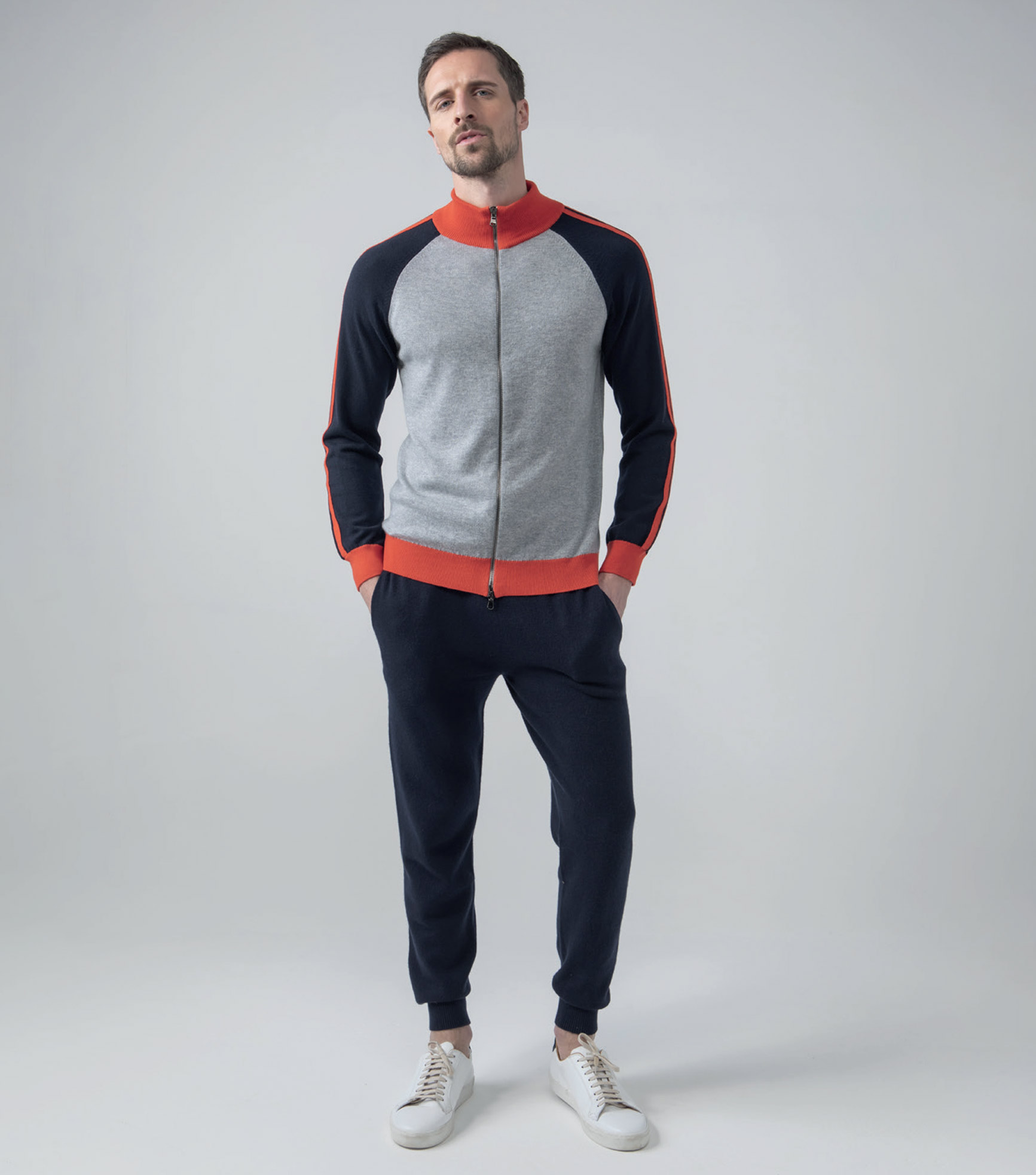 Just like your work suit that you spend all day sitting in, you want your work-from-home suit to be made from the finest fabric – and there is no finer fabric than cashmere, something Scottish brand Johnston’s of Elgin has specialised in for over 200 years. 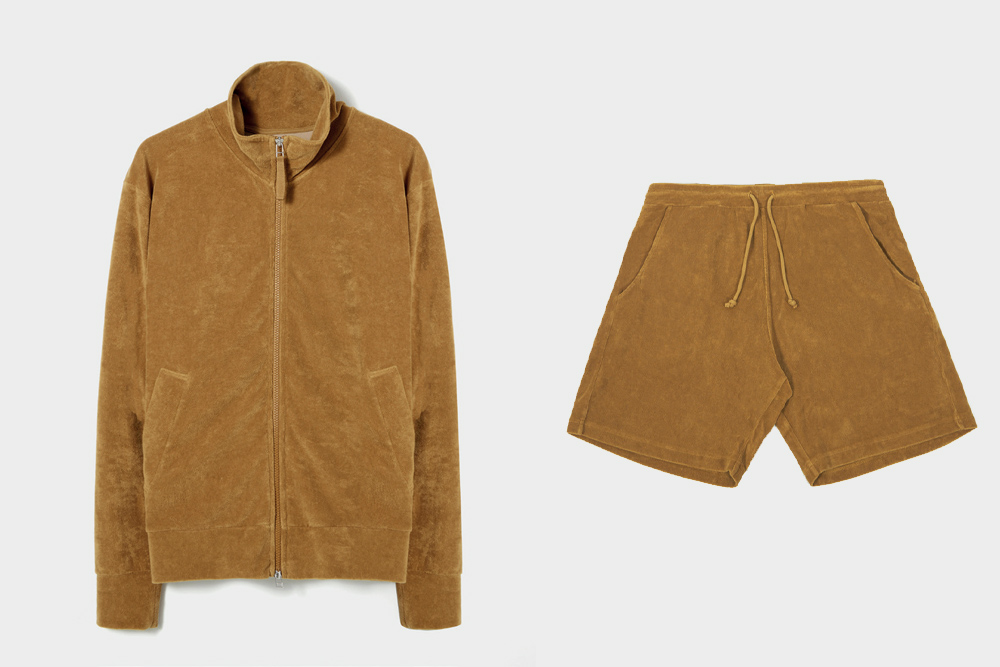 For a tracksuit that’s as smart as it is summer-ready, look into new-wave Brit brand Universal Works. Its new season terry cloth ‘beach’ tracksuit might not be able to be worn on the coast just yet, but its shorts and sweatshirt combo is perfect for warmer days on your laptop in the garden.

4.If You’re Going to Stay in Your PJ’s All Day…

The pyjama shirt has become a staple of many menswear labels’ summer offerings over the past few seasons – it’s relaxed, it’s laidback, it looks great worn with a cocktail in hand at the bar on a night out. While we wait for those bars to reopen, kill two birds with one stone and invest in a set of PJs you kick around in all day with a pattern that will look just as good with a pair of jeans later this year. 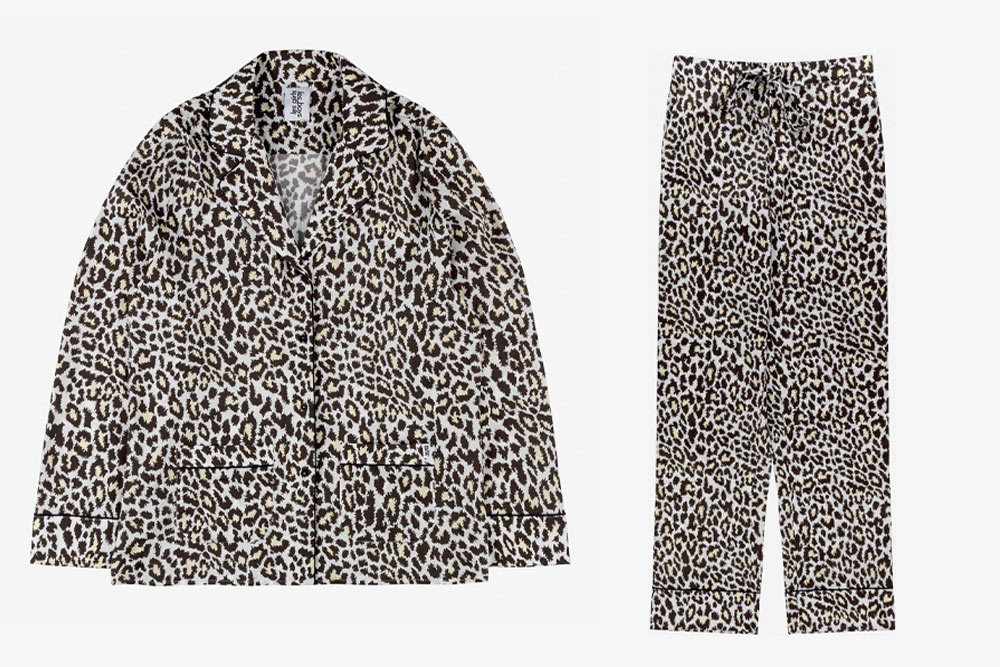 Some feel that pyjamas are inherently sexless. Those people are wrong. As evidence, we present these leopard print PJs from Les Boys Les Girls, which will instantly make you feel like a rock star chilling out after headlining Coachella. 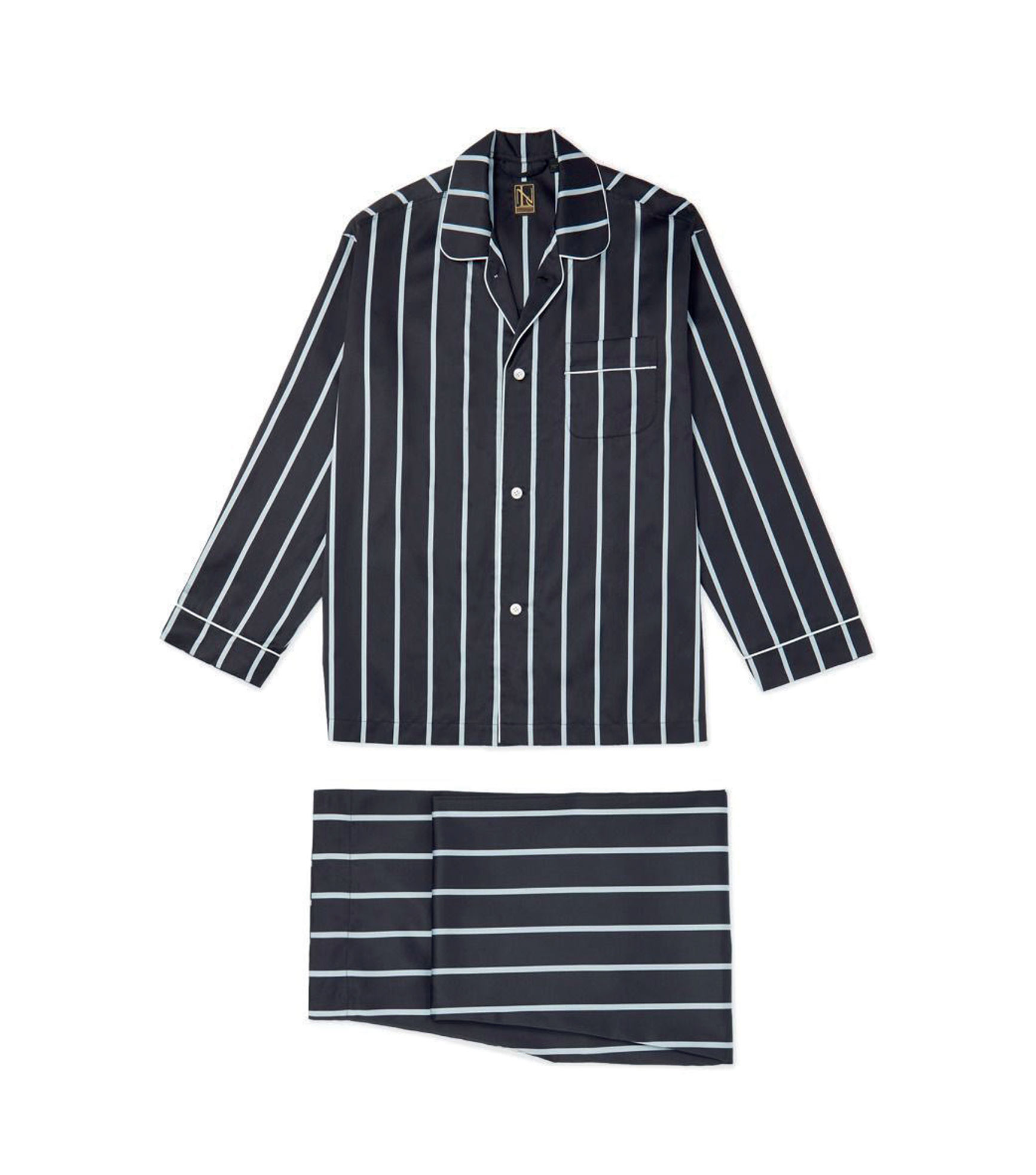 Old school in the best possible way, these striped PJs from New & Lingwood in the Old Etonian colours of navy and sky blue are cut from two-fold Italian cotton that’s such fine quality that it has a silky sheen. 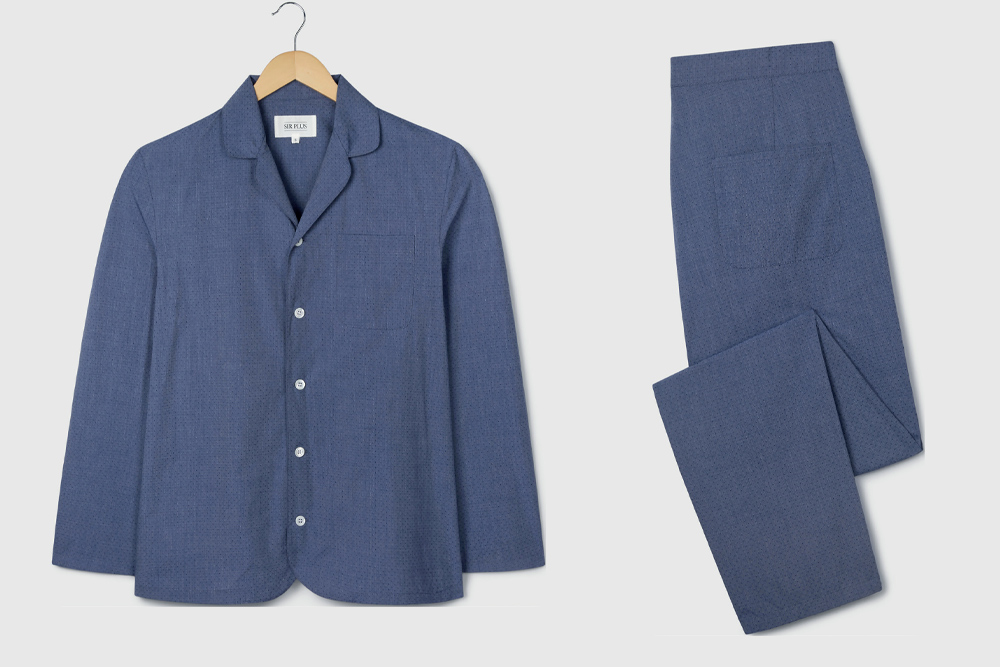 If there’s anything we’ve learned from classic Hollywood films, pyjamas should have certain jauntiness to them even if the pattern’s more conservative. These are a perfect example, with a blue-on-blue polka dot jacquard design that is calm in the long shot and fun in the close-up. 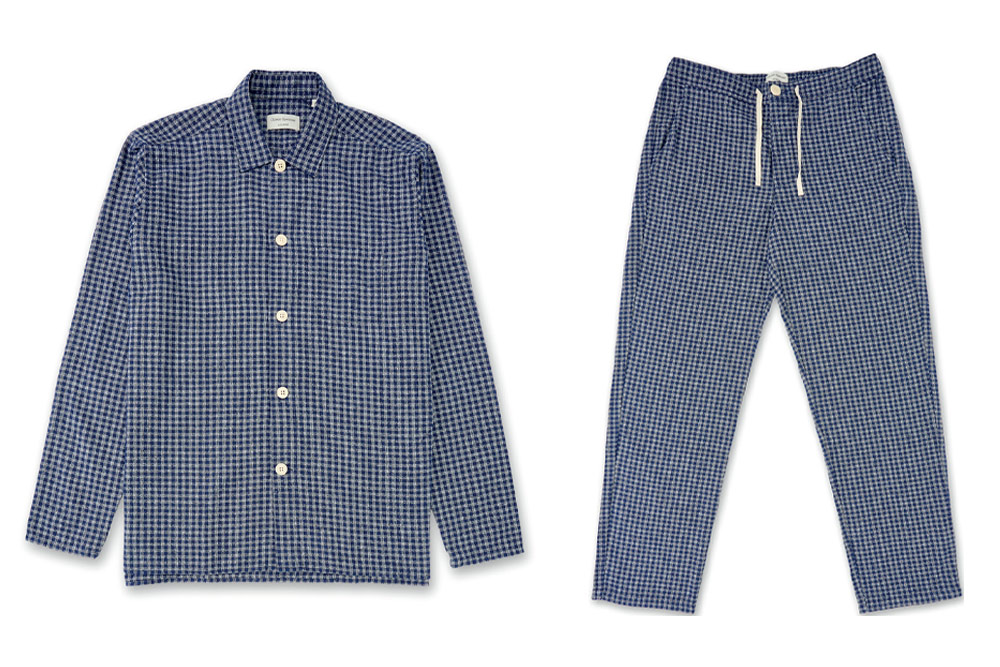 With a relaxed fit and picnic blanket- style blue and grey mouline twisted check yarn, these cotton PJs from Oliver Spencer are the sort of pair that will look even better crumpled than crisp. 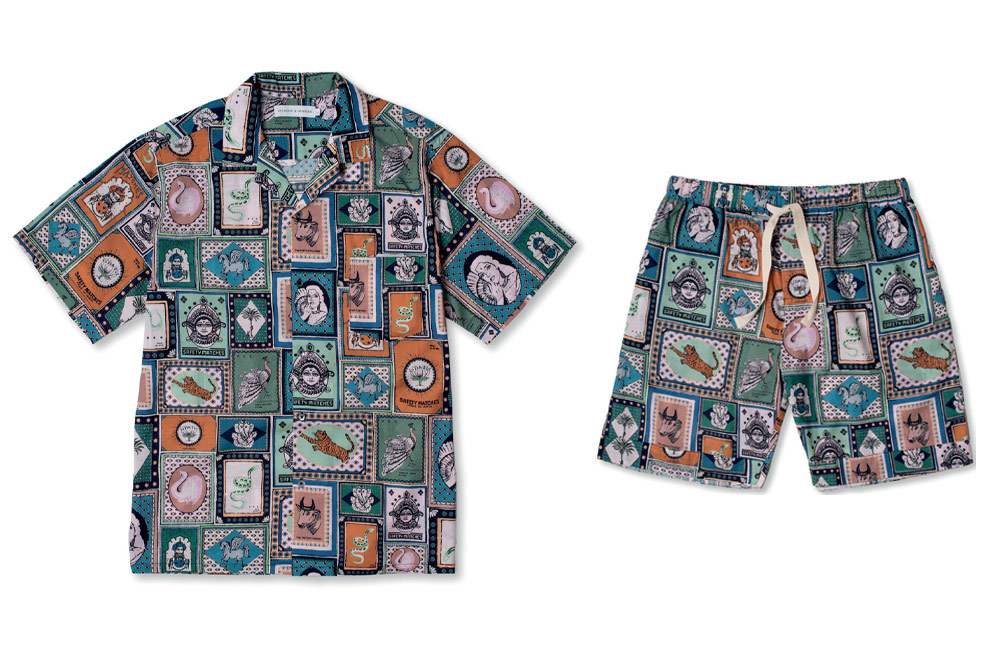 Cuban collar shirts might have first gained popularity in ‘60s America, but Desmond & Dempsey’s pyjamas with a similar shirt cut look to ‘60s India for inspiration. This eye-catching print is composed of memorabilia from mid-century Indian cinema, from posters to matchboxes.