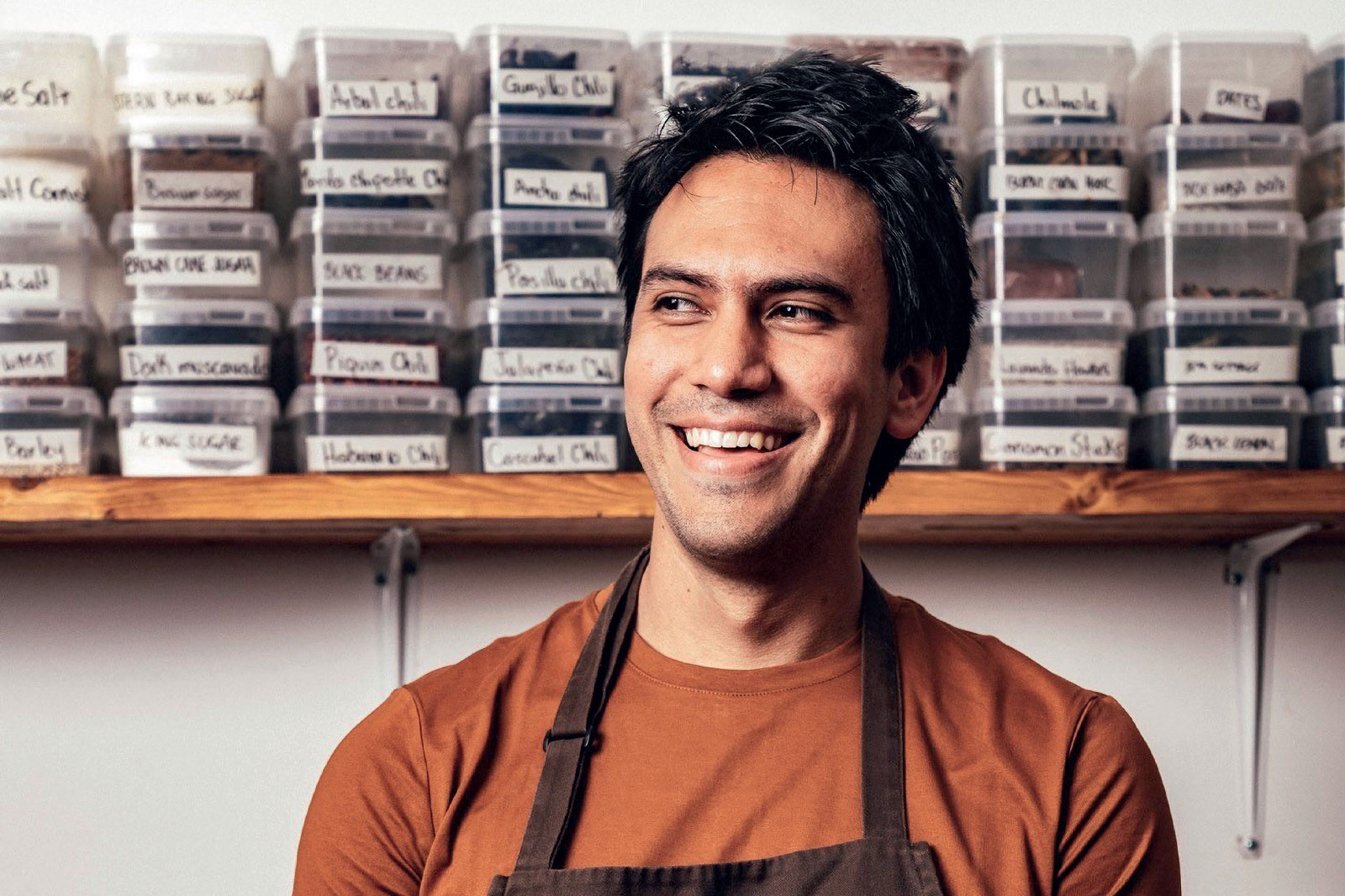 I first met Mexican chef Santiago Lastra the year before he opened Marylebone restaurant KOL as chef patron alongside MJMK Restaurants. He was preparing an outdoor feasting banquet of lamb asador tacos at a vineyard a few hours outside of Bratislava in Slovakia. At the time he had been travelling the globe, up to 30 countries per a year and five in a week, cooking for supperclubs and private parties, often forgetting which city he was in when he’d wake.

Lastra has the sui generis ability to create community wherever he goes, and also to blend a locavore ethos to sourcing and foraging ingredients with his native talent for preparing Mexican cuisine, performing substitutions along the lines of lime with gooseberries and avocados with pistachios to keep his cooking sustainable. In the years before this he had collaborated with René Redzepi at Noma; served as project manage in Noma Mexico; ran one of Carousel’s most successful pop-ups in Marylebone; and also rattled the pans at two Michelin-starred restaurant Mugaritz in Spain. 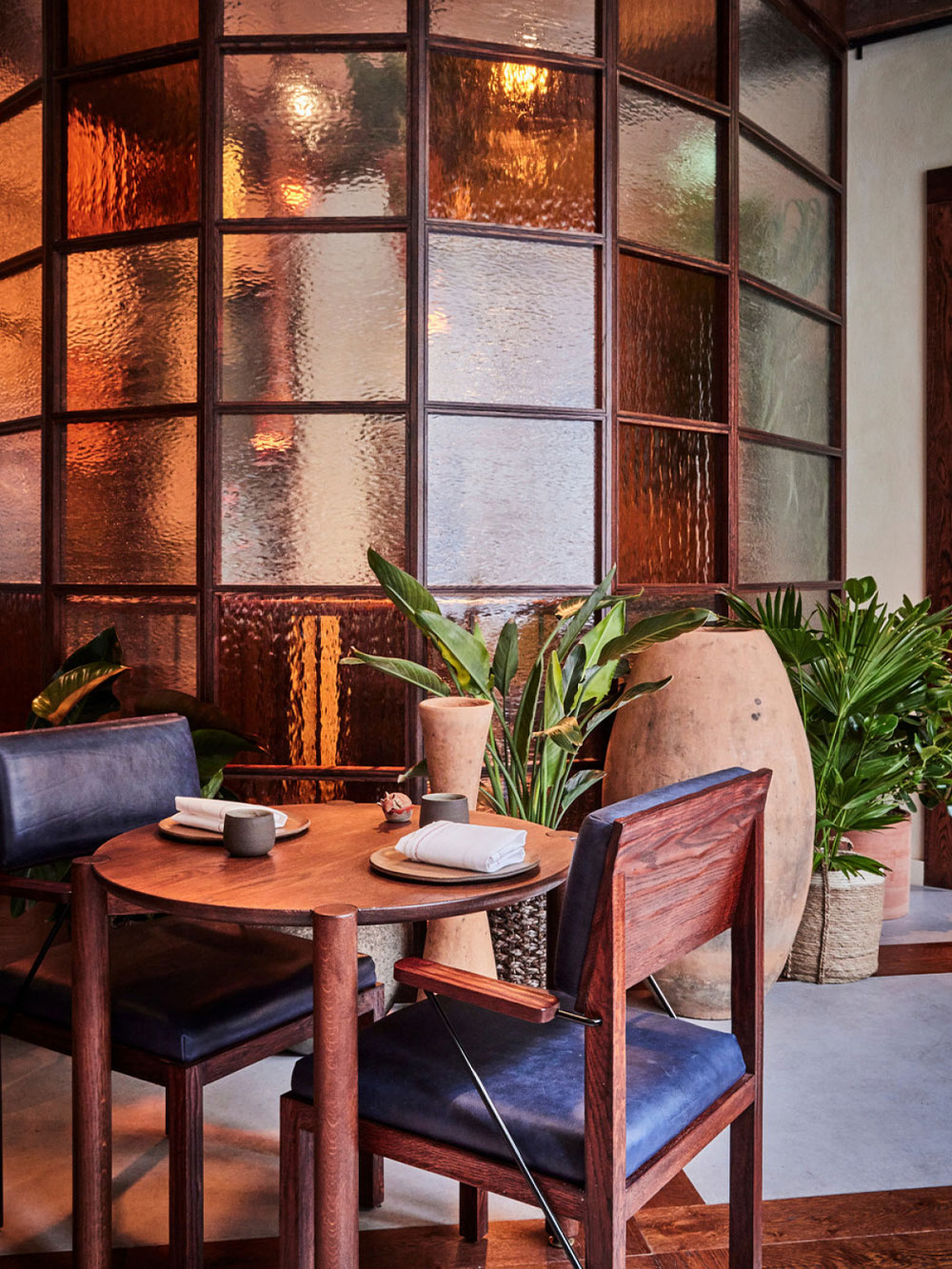 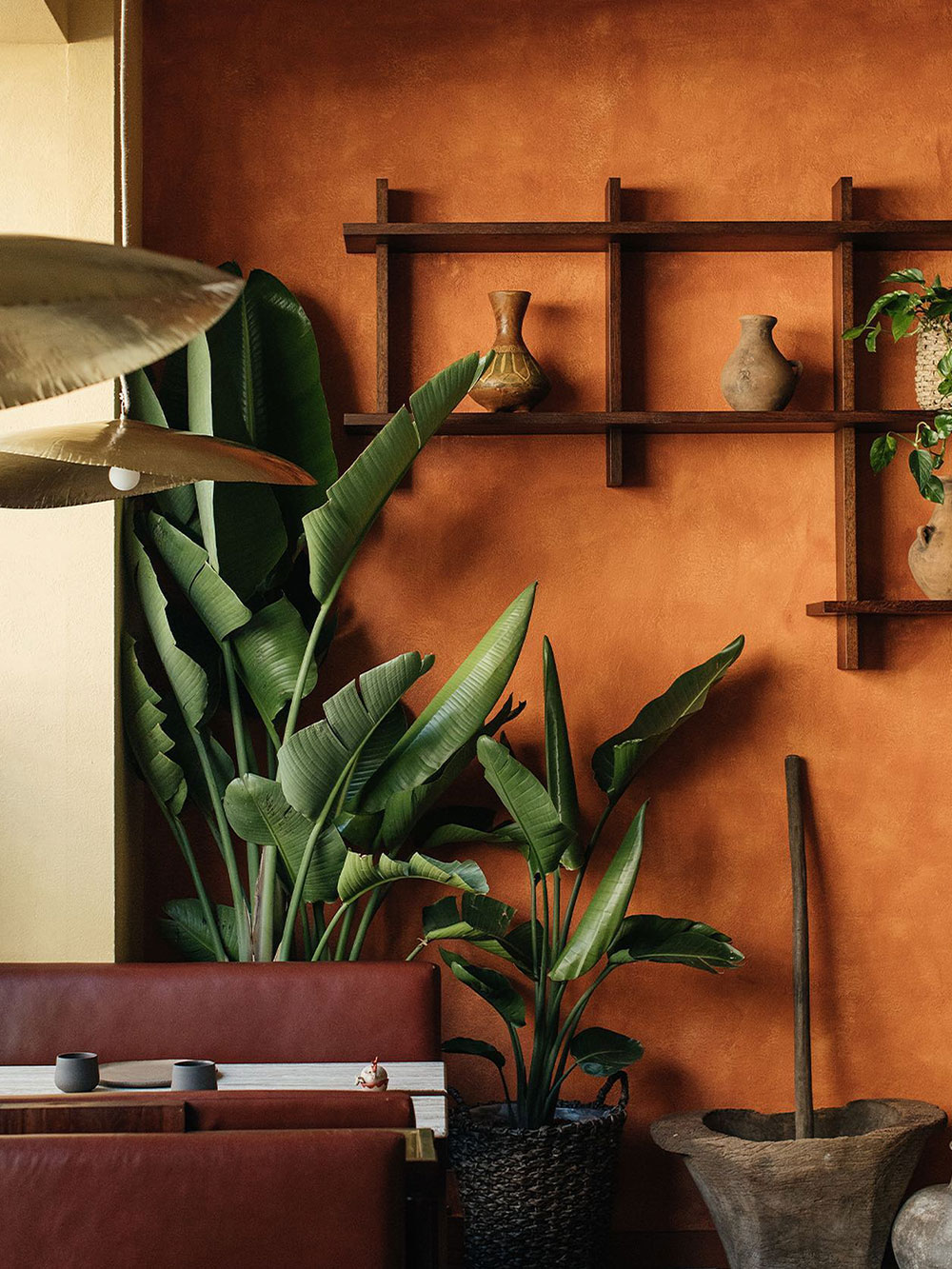 Following the opening of KOL, during the height of the pandemic in 2020, Lastra was awarded for his unique place within London’s culinary world by GQ, which deemed him Best Chef 2021; La Liste, as the New Arrival of the Year 2021; with KOL being recognised as one of the top 35 restaurants in the UK in the National Restaurant Awards. I caught up with Santiago to see how he was feeling having settled into a permanent home, and what the future had in store.

What do you think gives you the most drive as a chef? What makes you tick?

“I think it’s the sense of community and discovery. The main reason I opened this restaurant is to be able to build a network and a community of people that support each other. And it’s interesting how you can have an impact every day: not only customers, the producers and suppliers, but also craftmakers and indigenous communities. So, it’s a sort of ecosystem that comes together around the restaurant. The other reason is the sense of discovery.”

“I love discovering new flavours or tasting things that I’ve never tried. The creative process is inspired by ingredients from Mexico. But, in attempting to recreate those dishes with local ingredients to find that flavour experience of eating a certain fruit or a certain herb or a certain preparation that you normally would eat in Mexico, there’s a real sense of discovery.” 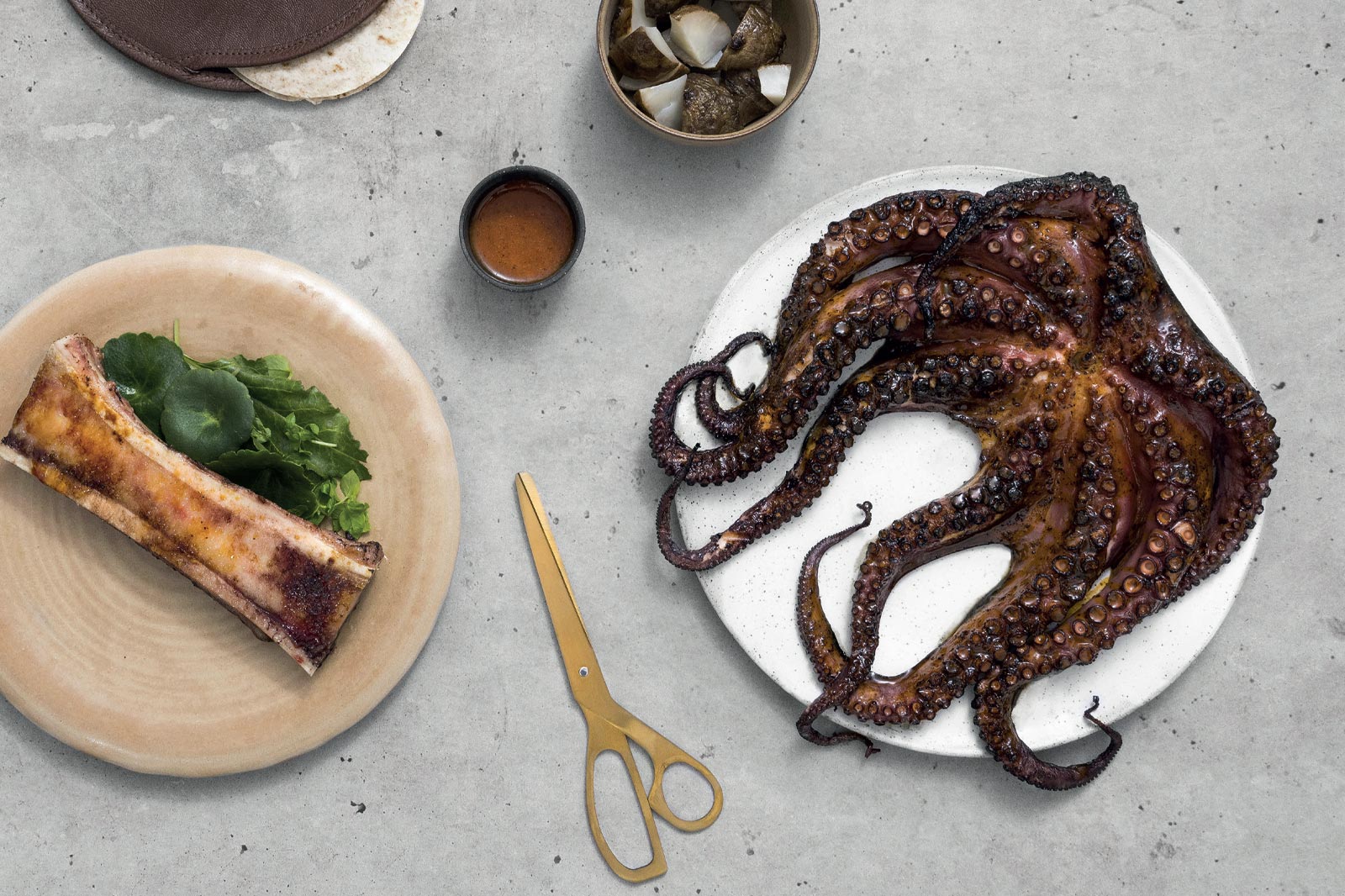 So you have a new home at KOL. Do you feel like you’ve created a community there?

“Yeah, I think so. When I was travelling often I could make or come up with recipes, but they never felt finished. And I think that is something that is really special about cooking; it’s not a one off, it’s a craft that you need to keep at every single day to perfect. It makes a whole world of difference when you are in one place.”

So you feel like you’ve been able to hone your craft at KOL? 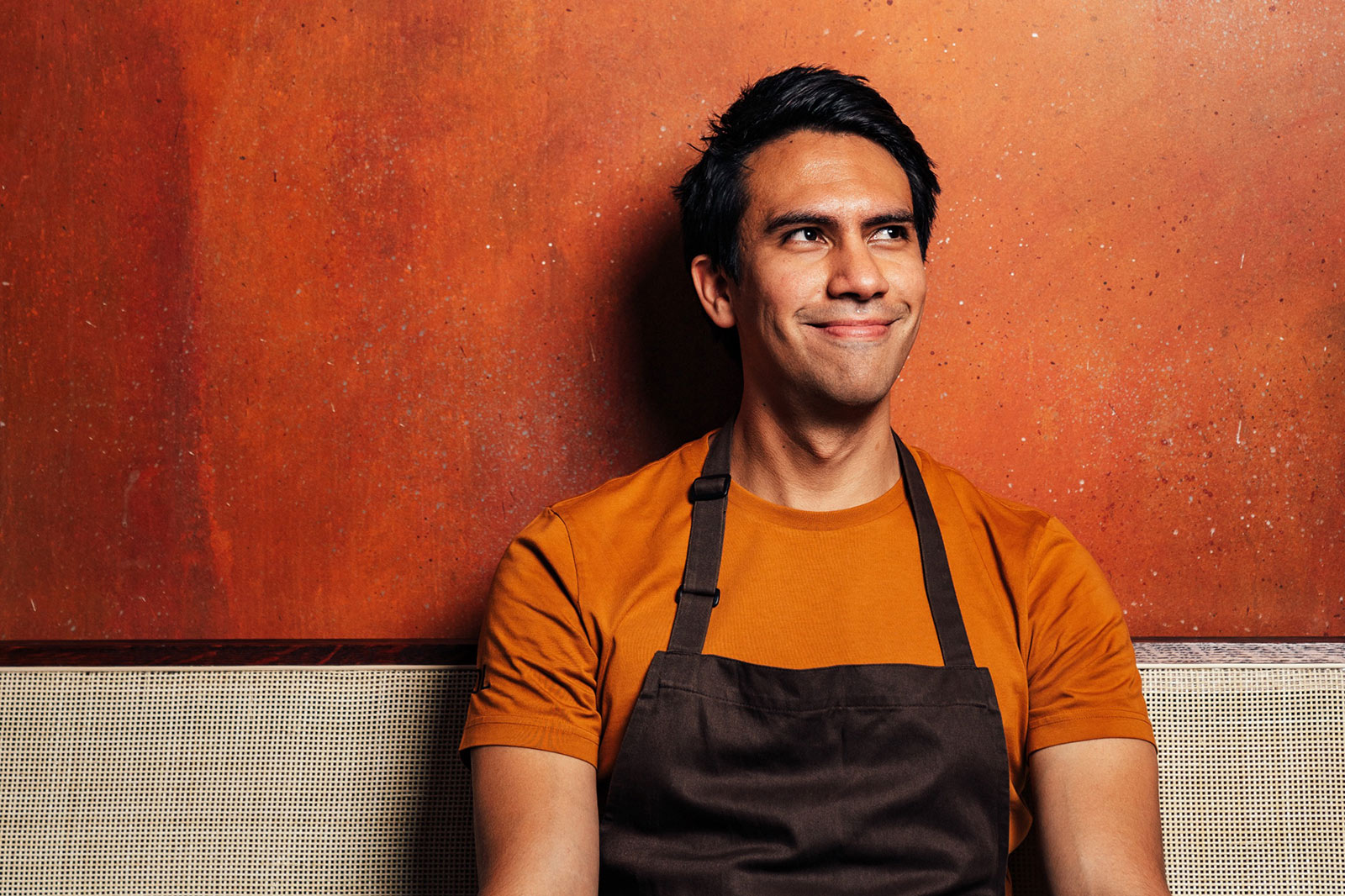 Do you think you are able to pursue intellectual discovery more at KOL?

“Yes, yes, yes. Because there is a framework in the concept of KOL. I think that is really important when you want to create something because if you don’t have a concept with some sort of limitation or framework, it can be really difficult. Our mission at KOL, to use local British ingredients to create Mexican food, has helped our team to operate within a framework. My colleague Adam, the team and I work at the test kitchen in the restaurant, and I currently have 800 dish ideas saved on my phone.”

“When I’m travelling, reading a book, walking or running I’ll have an idea, and then we can all sit down and workshop it with the ingredients that are in season during the next couple of months. The other way we do research and development is freestyle experimentation just for flavour. We’ll wonder what happens if you mix something like camomile and cucumber and get some great results. It’s much easier to do that at KOL rather than when travelling.” 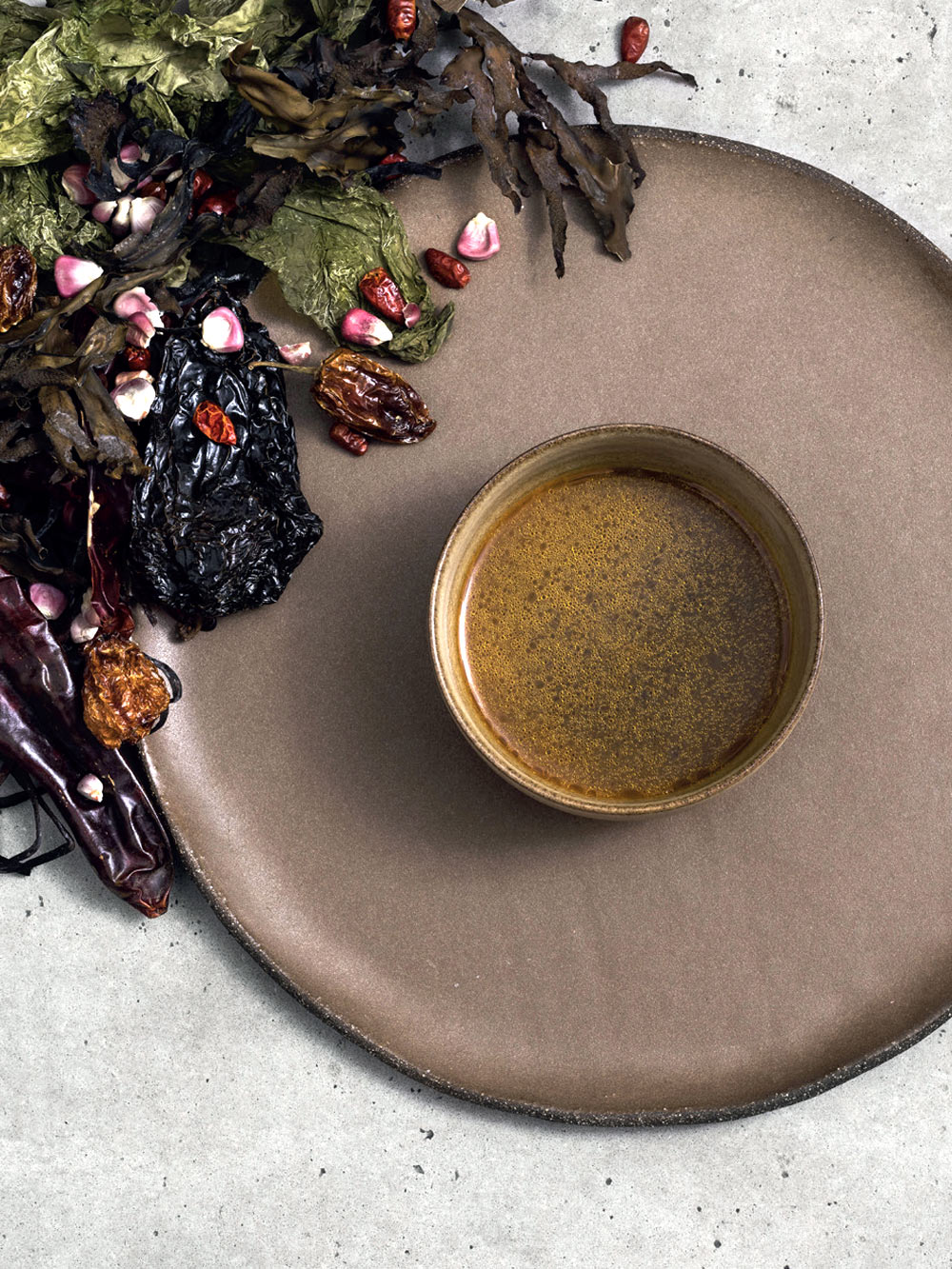 I find it interesting that a lot of your inspiration comes from when you’re walking or running, moving around. It seems like you still get some inspiration from being nomadic!

“Yeah, exactly. I mean, if you’re anywhere, and you’re just having some lunch or dinner and then you try something and you have an epiphany like “oh my god”. This connects with you somehow. It doesn’t have to be in Mexico, it can be in Japan, Paris, London, anywhere. And inspiration also tends to come when you’re exercising, walking, or clearing your head. Inspiration doesn’t happen when you’re answering emails.”

Is there any chance we could get a sneak peak of one of those 800 recipes?

“We’re working on a chestnut tamal. It’s traditionally made in oak leaves in Mexico. Instead of using corn husks, people in the forest use oak leaves. But we ordered some chestnut leaves last week. We’d make it with a chestnut masa, chestnut butter and a chestnut flour and then fill that with pumpkin and serve it with coffee and mezcal.” 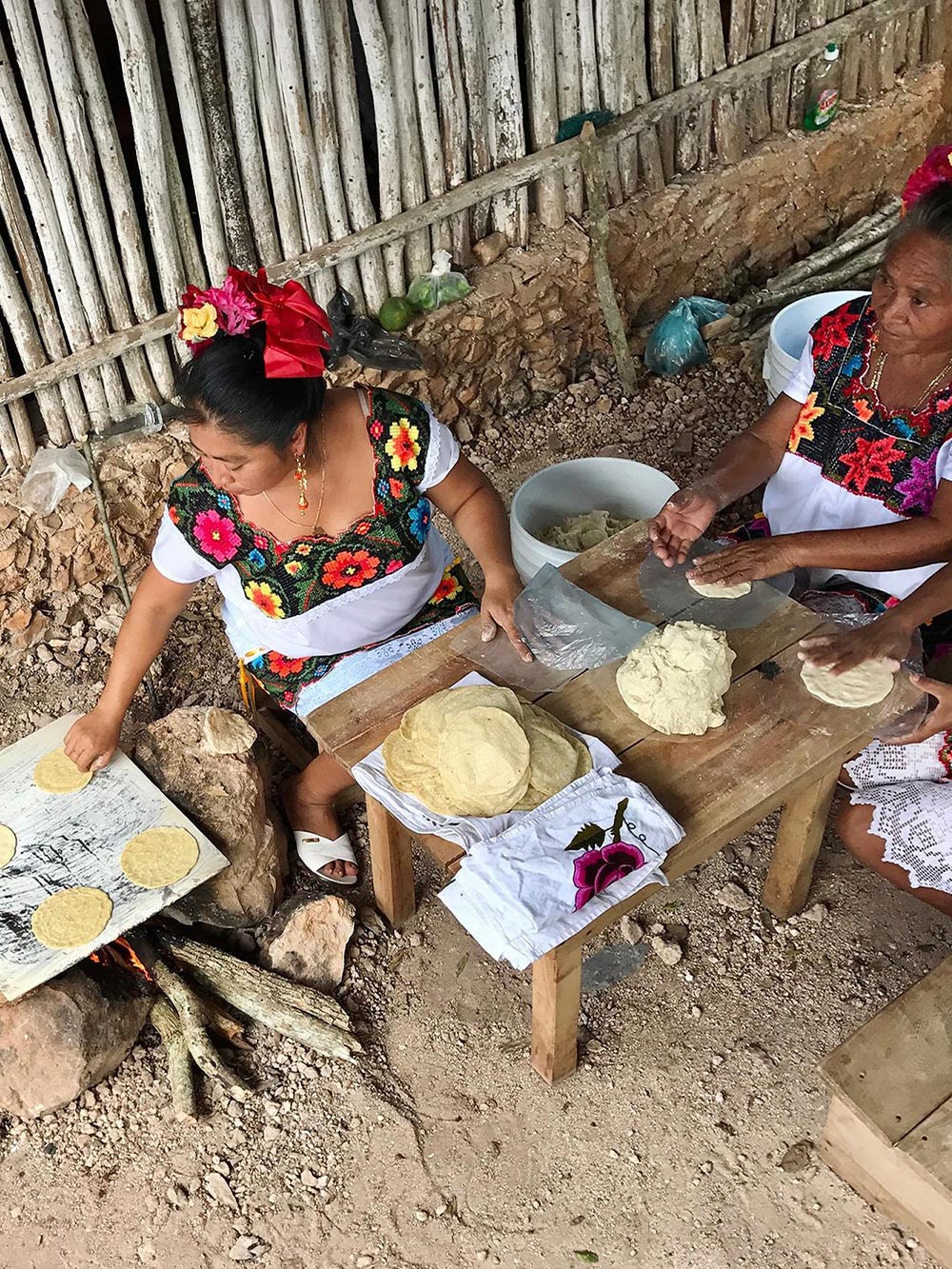 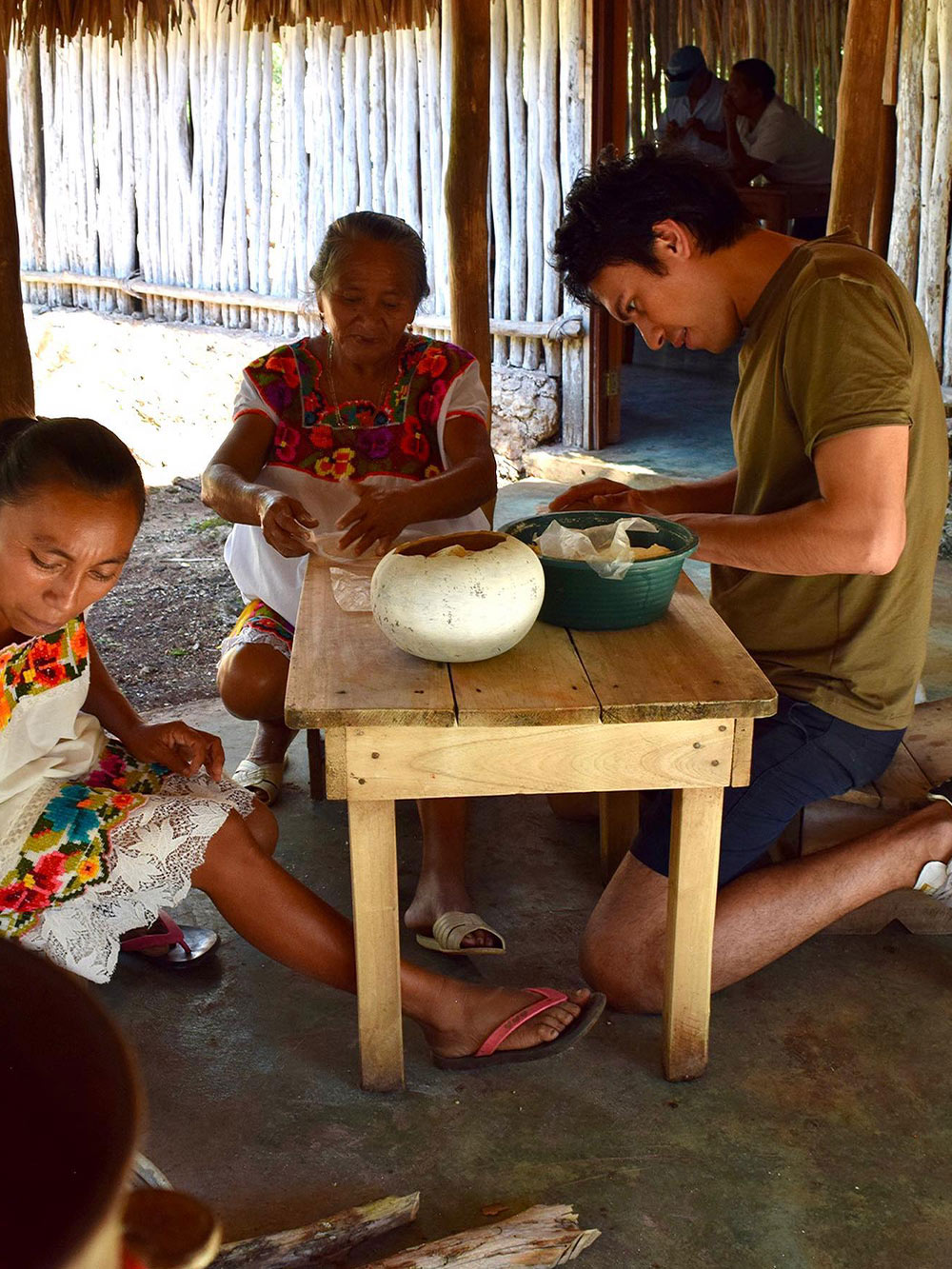 Are there any chefs that have a career arc that you wouldn’t mind following?

“The indigenous chefs in Mexico. It was really inspiring to be able to visit them to see and experience how people used to cook and live in Mexico thousands of years ago. You can actually experience it just by driving a couple of hours from the city to the countryside. For many generations, they’ve been spending their entire lives cooking and are completely devoted to it. They take farm-to-table to the next level: making their own pottery, their own tablecloths, they harvest, forage and farm. If they want to prepare a wedding, they work on it for six months.”

“The Totonac indigenous community in Veracruz, on the east coast of Mexican, call themselves the women of smoke. They say that they are born, they live, they work and they die in the kitchen. It’s incredible to see the devotion. They’re still cooking at 100 years old. The other is René Redzepi. Travelling with him and learning about what he believes is quality was really lifechanging for me. Thinking beyond a plate of food in a sustainable way. And the way that people plan at Noma. They take the process so seriously that the result is never a mistake.”

Do you have a favourite guilty indulgence when it comes to eating?

“I love offal and stuff like that. Not every single day, but sometimes. I mean, I know that most people will probably say chocolate. But for me, to have a plate of tripe or livers, super latino stuff. I really like it. Even brain.” 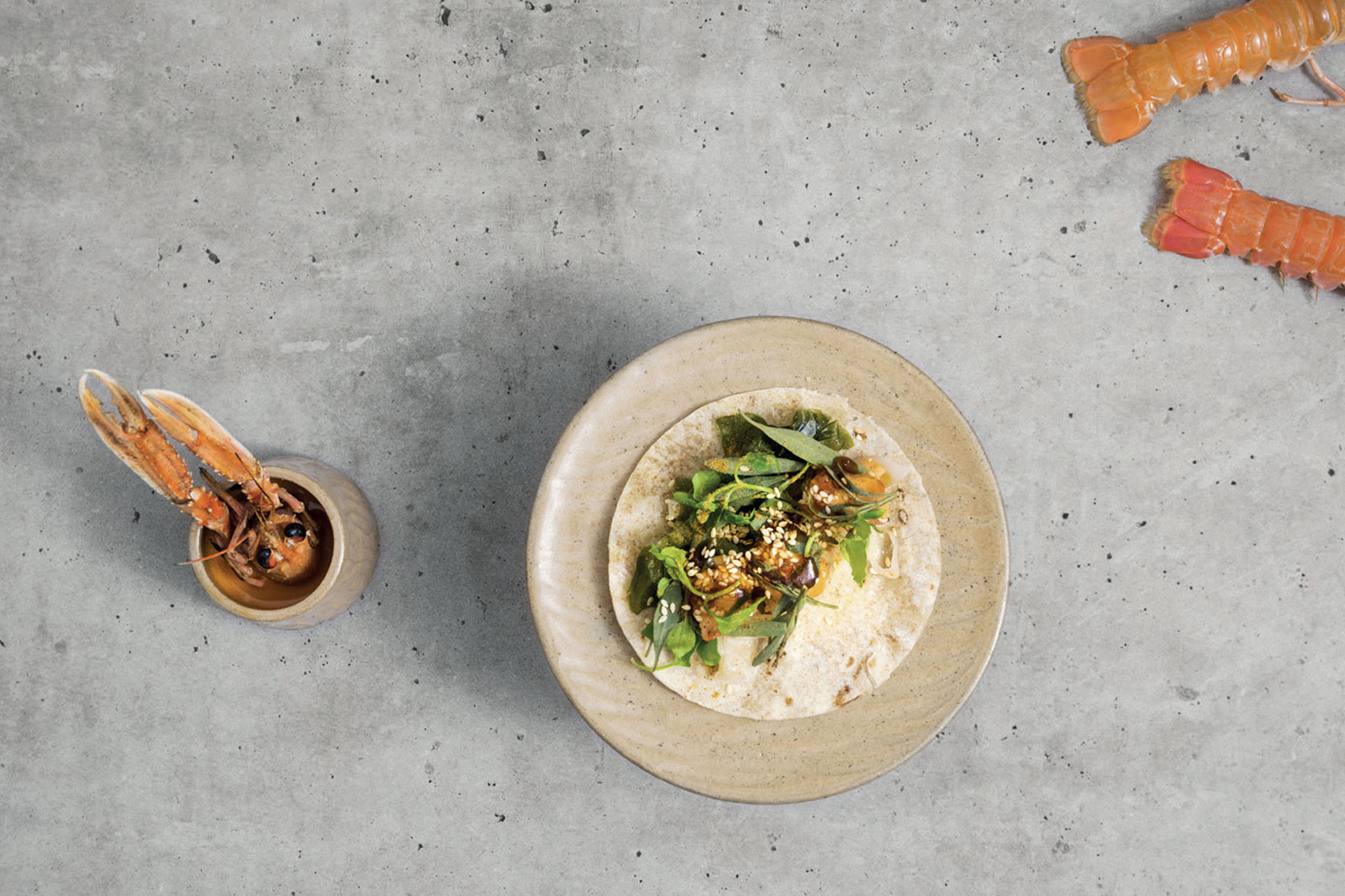 Finally, what would your last meal be if you had to choose?

“We organised a fish supper on Baja California in Mexico outdoors on the beach and we had fried lobster tacos. We cut the lobsters in half and fried them in pork fat over a big wok above a bonfire on the beach. There were ladies making flour tortillas, salsa, beans and rice. So we had the most amazing lobster burritos in the breeze, next to the sea, with natural wine.”

I think you just won the prize for best last meal. Always a pleasure, Santiago.

More information and bookings at KOL. Ex-Marine sniper, adventurer and all-round man of brawn Aldo Kane requires kit that has to meet an...