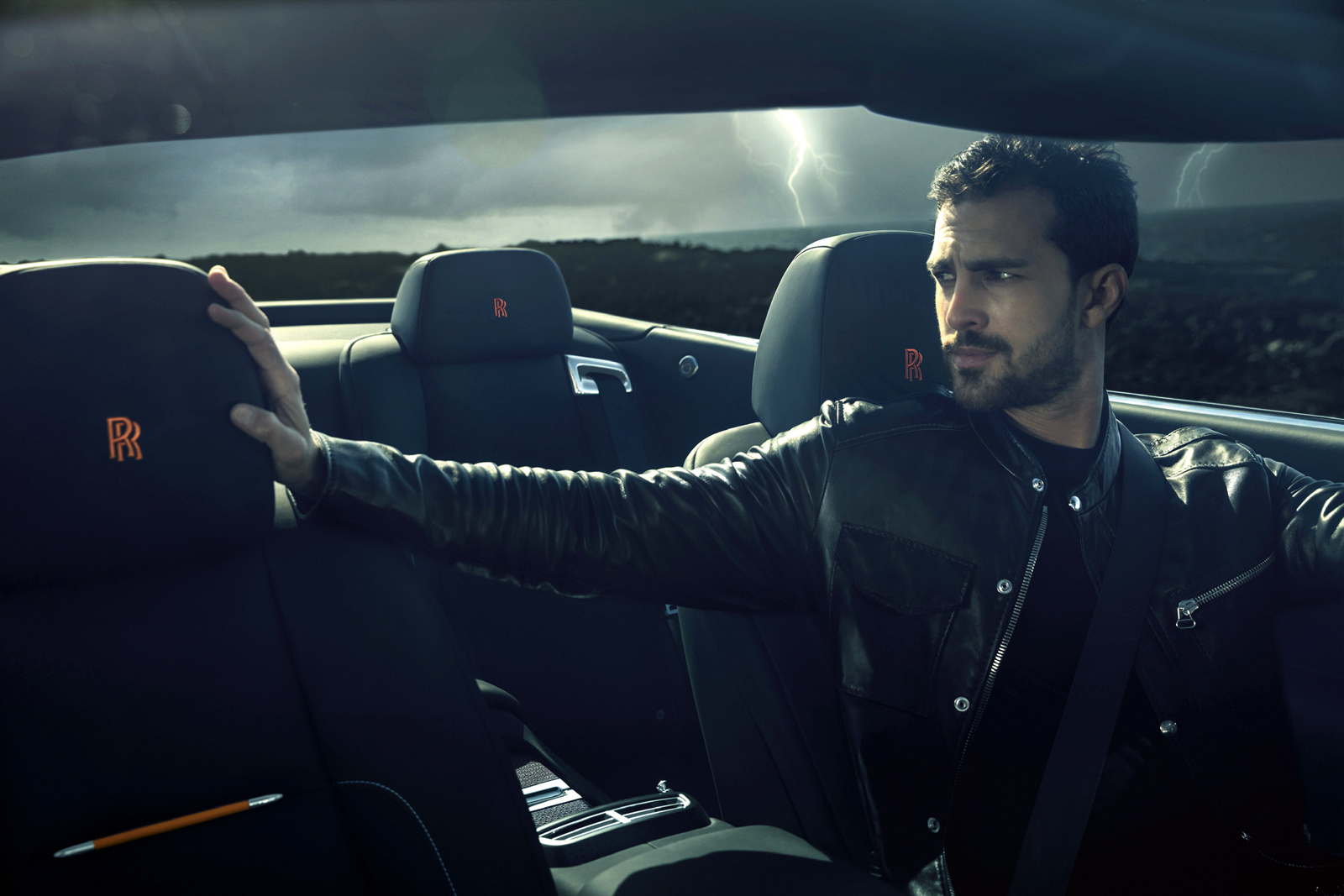 Rolls-Royce are a lot like the Royal family – adored worldwide for their Britishness, but actually when you delve a bit deeper, secretly German. However, that’s a good thing: it’s BMW’s efficiency, ingenuity and innovation that has led to the resurgence of the world’s most luxurious car manufacturer. This reputation has been cemented over the last two decades by creating some of the most opulent and lavish cars money can buy.

In recent years, however, they have moved past their gentry horizons into the world of tech millionaires, music moguls and sport stars, and the car giant has responded in kind, deciding to show everyone how to make a Rolls- Royce edgier without detracting from its elegance. Enter the Black Badge division. For the uninitiated, Rolls- Royce’s Black Badge moniker is their in-house tuning and modifying arm, which takes the standard models, stiffens them up, squeezes some extra BHP from their already generous engines and gives them a brooding facelift.

Of course, with names like Phantom, Ghost and Wraith, Rolls-Royce’s current models are hardly a light-hearted bunch, but given the Black Badge treatment, they promise a more
engaging driving experience. 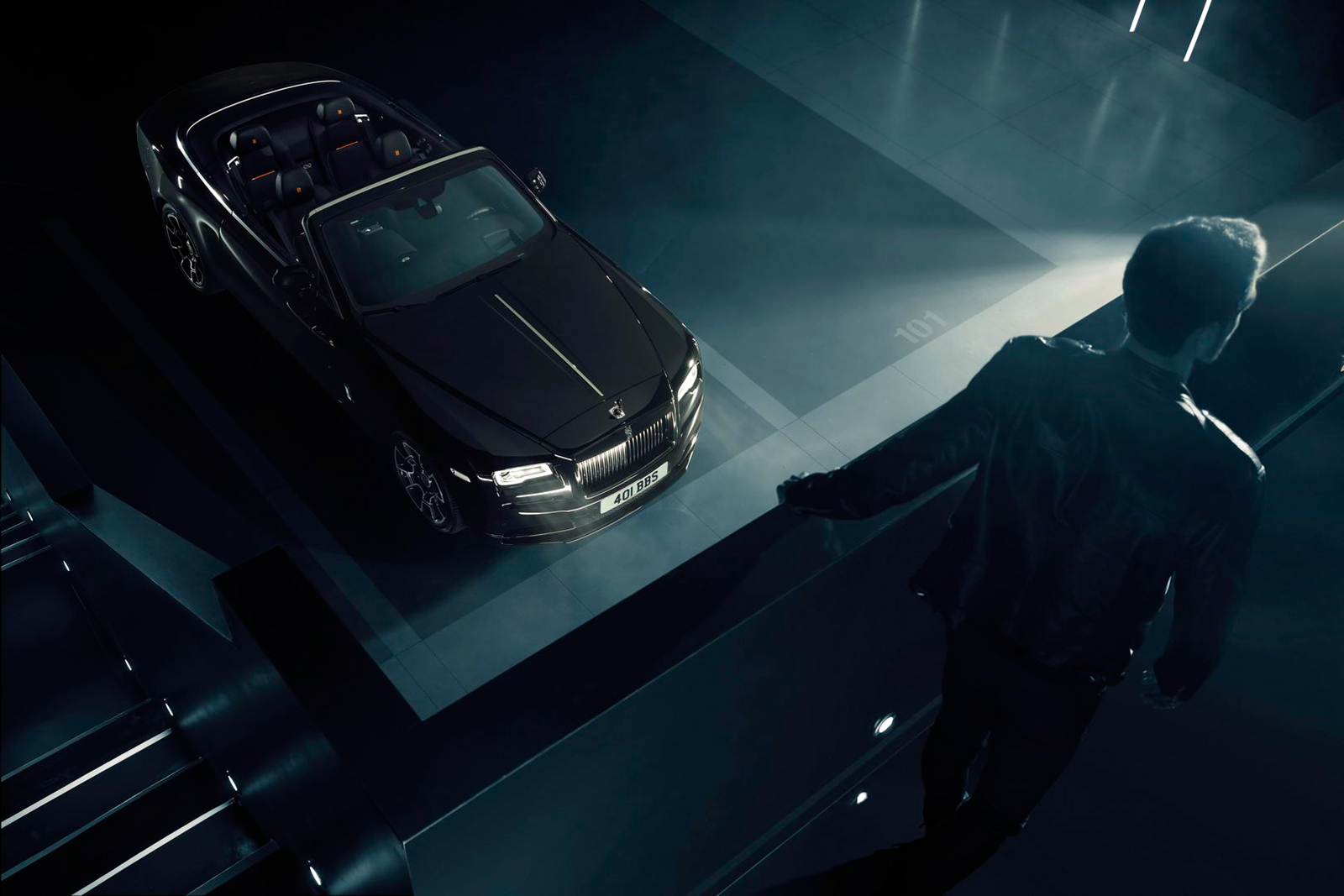 I first laid eyes on the Wraith BB in the Goodwood factory when I visited in 2016, and since then I’ve been enamoured with the beast. Up until that point my dad would bang on about Rolls-Royce, comfort and maturity and my eyes would glaze over. Of course, I always appreciated the Goodwood-based company’s artesian credentials but, as James May would say, their cars didn’t give me “the fizz”.

The Wraith Black Badge is an extremely imposing car, and the sheer steel grill makes you wonder how it managed to beat the likes of the McLaren 675LT up the Goodwood hill climb. However, in its BB form it somehow manages to look more squat, moodier and frankly more aggressive than its vivacious cousin, without losing those long elegant lines. I was in love.

Rolls-Royce cater to such a discerning bunch of clients, their bespoke division is unrivalled (you may recall the one-off sweep tail created for a valued client earlier this year). Mere mortals still get to choose the colourway of the exterior and interior as well as a plethora of other options. You can even mix your very own colour and essentially patent it within Rolls-Royce, ensuring no gold-wrapping sheikh can steal your thunder. Got a favourite watch? Rolls- Royce will match its exact tone. A dog you’re a little too fond of? No problem. 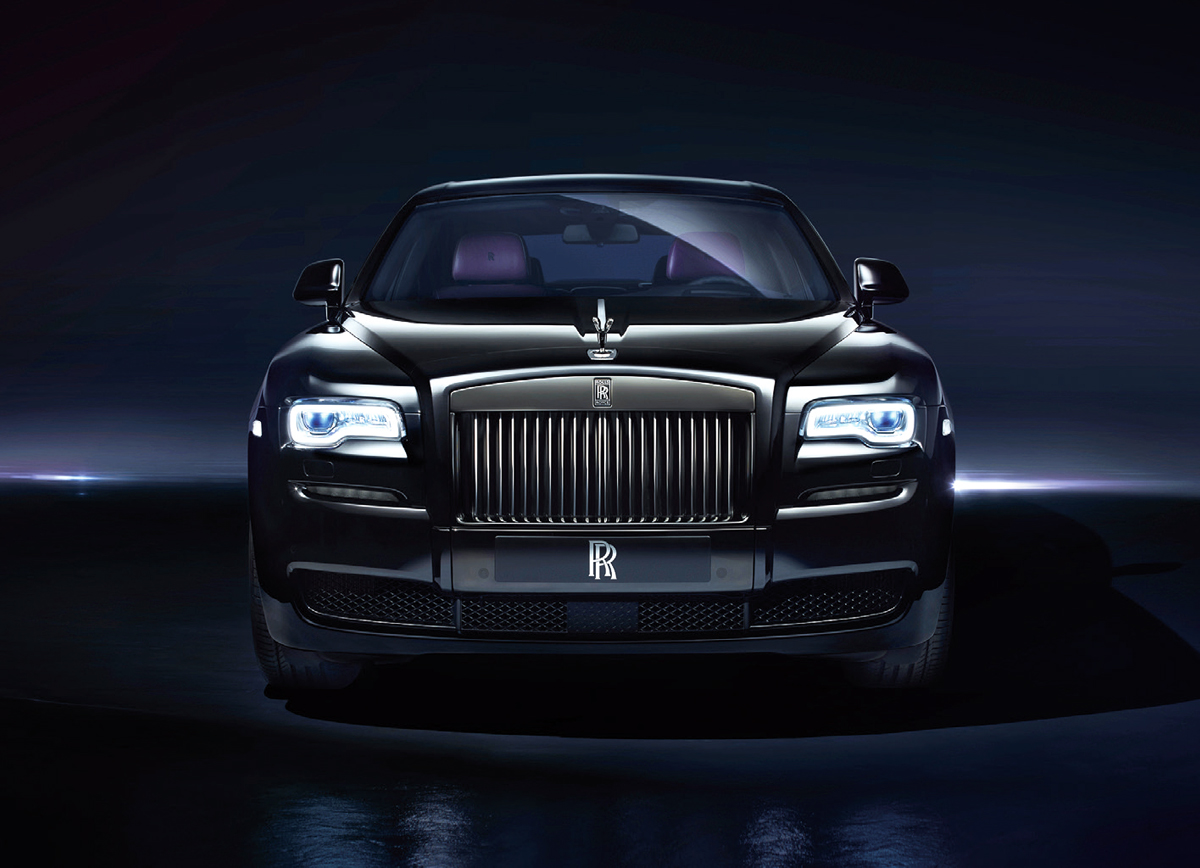 The Wraith BB’s rev limit has been increased, making it probably the loudest Rolls-Royce ever produced.

With the Wraith BB, however, I recommend you stick to the noir vibe the name implies and go for something to match the black spirit of ecstasy badge. Our car was a deep blue, which revealed a beautifully deep, flecked purple when the sunlight refracted from it. Perfection. Inside is what you would expect from a company who are the barometer of luxury interiors. Though not particularly new, the constellation roof never fails to impress and little touches such as the spring loaded, Teflon-coated umbrella in-door cavity will provide entertainment to children and grown-ups alike. The air vents have now been coated in a black finish familiar to fellow watch geeks in the form of PVD, while the dash is covered in an absurdly detailed aluminium and carbon fibre weave, creating a striking visual.

The leather choices are endless, however ours came with a striking black and cobalt blue calf leather scheme that hinted at a mysterious, modern hotel bar. 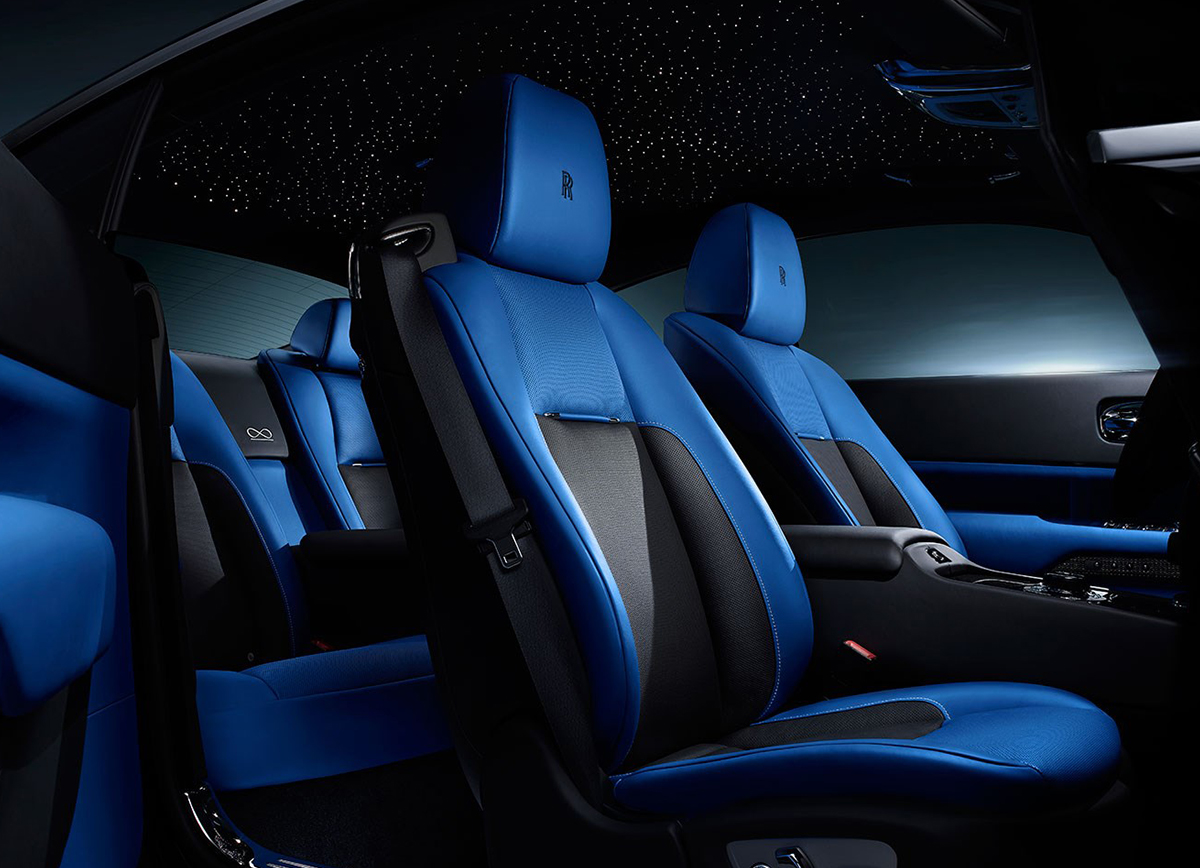 To drive the Wraith BB is disconcertingly fast. Your brain tells you a car this large and heavy shouldn’t be able to move as quickly as it does. The ‘Standard’ Wraith is certainly no slouch, however the upgrades for the Black Badge are certainly more than just superficial. The 6.6 Litre V12 still outputs the same 623 BHP as the standard model, but crucially outputs 642 torques – that’s 52 more than before, giving the impression of more urgency when your foot’s to the floor.

In fact, it easily managed to reach the 155mph top speed it is limited to, on a road I will call for this review, the ‘Autobahn’, and actually felt more secure than lots of other supercars. And although I didn’t get a chance to test it for fear of ruining the rear tyres, I more than believe it’s 0-60 time of 4.3 seconds. 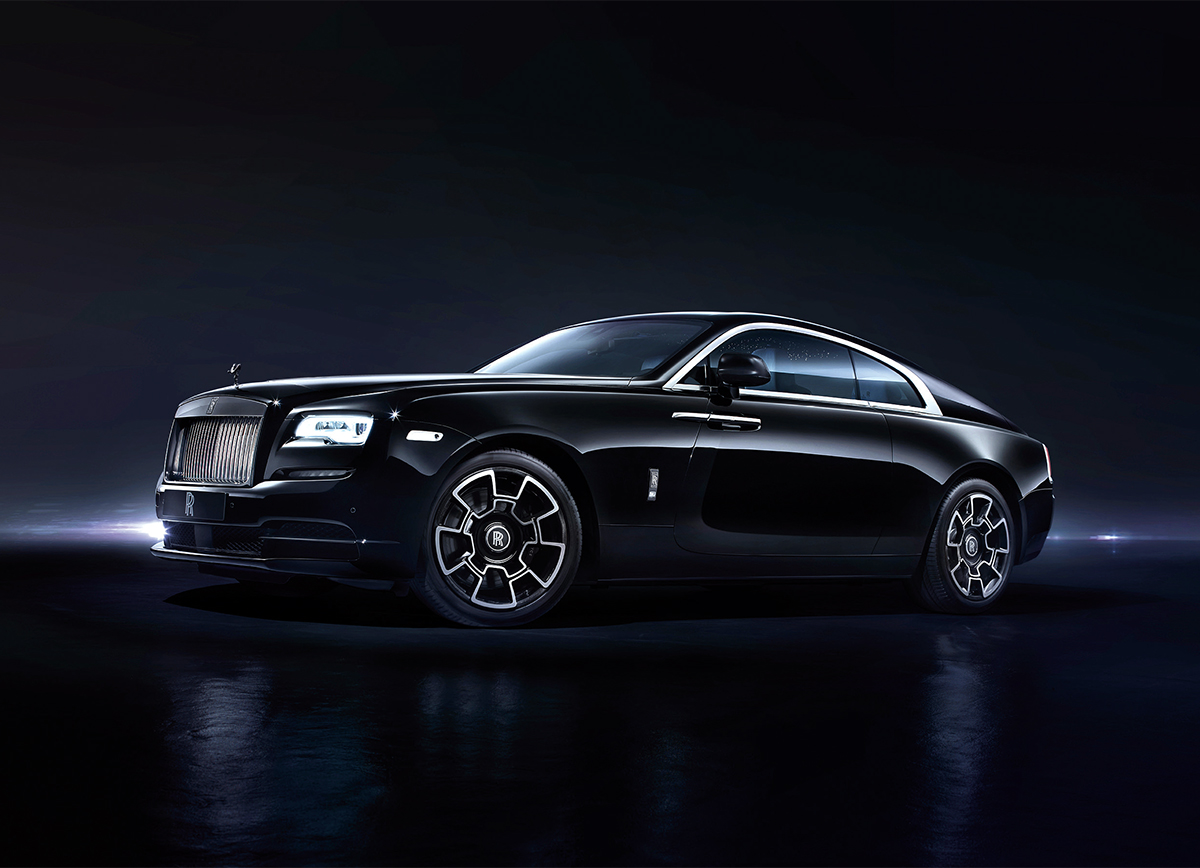 The 8-speed gearbox’s rev limit has also been increased, making it probably the loudest RR ever produced and giving you real feedback from the engine, despite the amount of sound insulation in the cockpit. Subtle tweaks too complex for my small brain have also been made to the suspension and steering setup, creating a much more planted feel when accelerating, and while in the corners. Don’t get me wrong though, the Wraith BB has certainly not sacrificed its tranquil credentials in the name of performance. It has gone through gentle engineering tweaks rather than a racing overhaul. It still feels like a car very much built for comfort, but it dares you to get to your destination faster, and with time becoming more of a commodity, I’m all in favour. 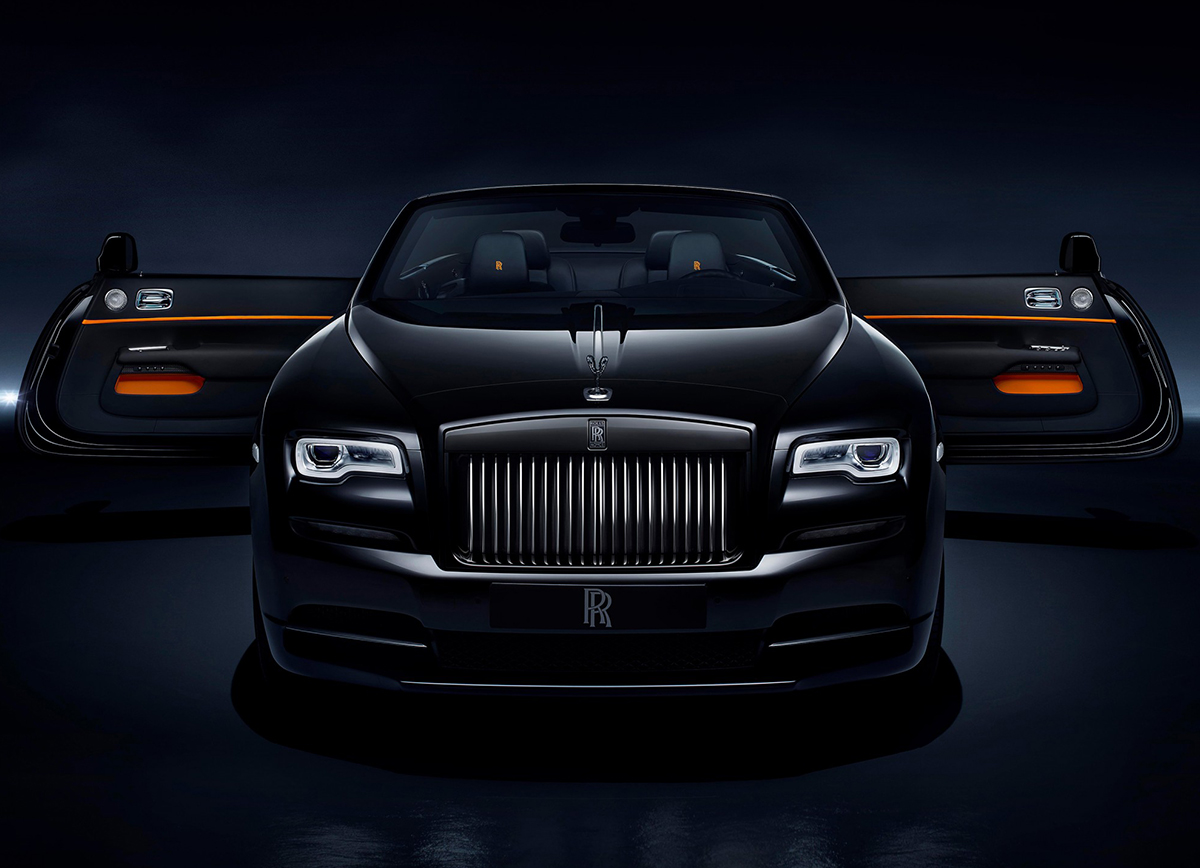 Launched at 2017 Goodwood’s Festival of Speed, the Rolls-Royce Dawn is the latest to be given the Black Badge treatment. Yes, the standard Dawn conjures up images of yachting on the Riviera, but don’t be fooled, the Dawn BB is positively gangster. Revealed in a multi-layered black gloss colour scheme, complete with huge black alloy wheels, chrome grill and exhaust, it’s perhaps the most extreme makeover yet. To further hide the Dawn’s nautical roots, they’ve covered the wood decking in black leather while the interior relies on bright orange accents to give it a splash of colour. The Dawn BB will output 30bhp extra and 20 extra torques, though the performance figures remain the same. Modesty? I think so.

We discuss bespoke and the Boat Tail with one of the most important men in the rarefied realms of...