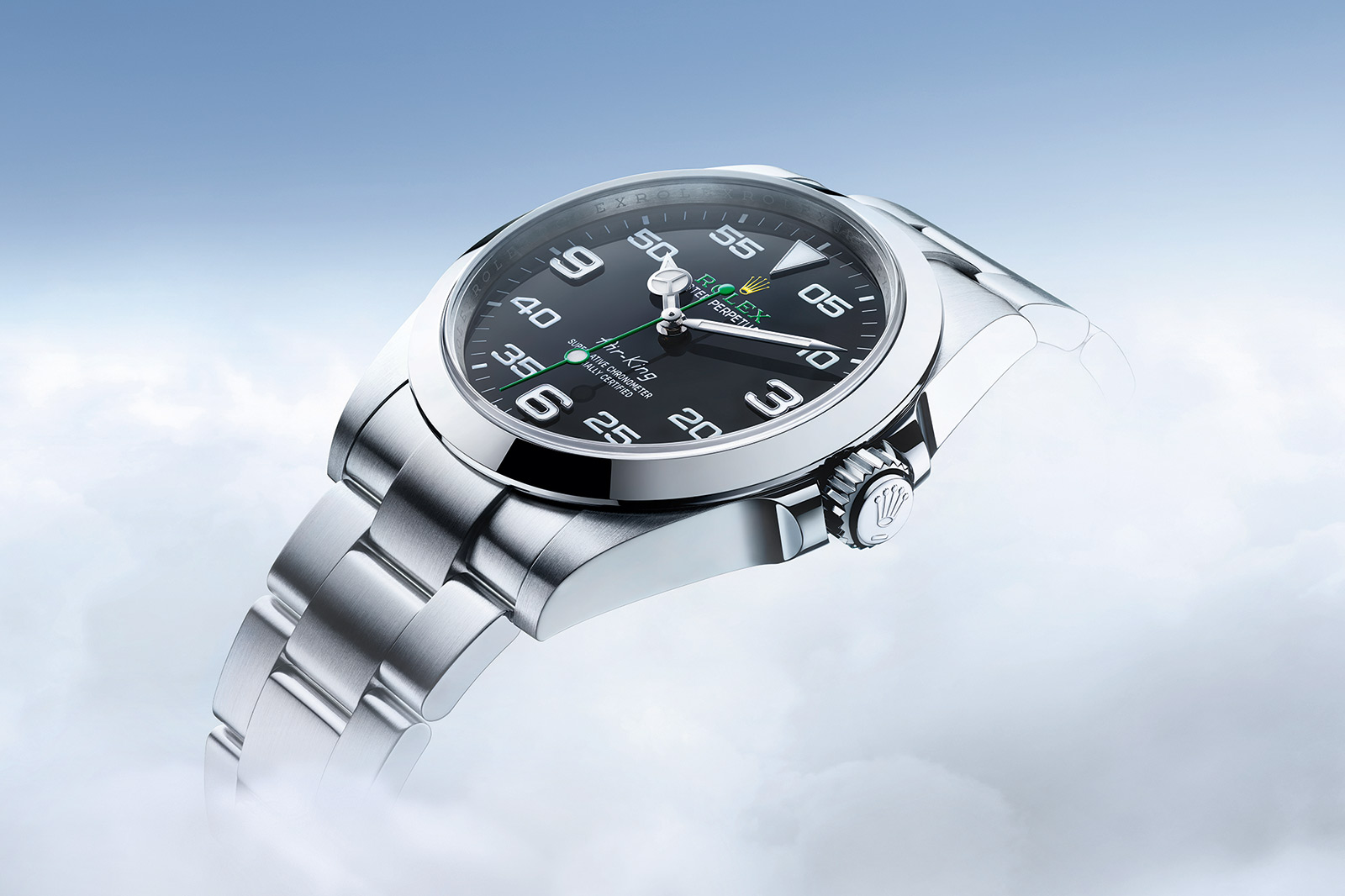 Finally, after months of build-up, anticipation and teaser references to the sky, the headline launch from the world’s biggest watchmaker is finally here: and it’s not a Sky-Dweller. Instead, Rolex has finally decided to focus on what’s regularly been cited as their most underrated steel sports watch, the phenomenally cool Air-King.

Unlike the previous Submariner alterations, the differences in the new Air-King model are pretty noticeable. Predominantly, that’s the new crown guard, where previously the crown was left unprotected. The lugs have also been straightened, both of which help the Air-King fall a little more in line with the rest of Rolex’s tool watches. 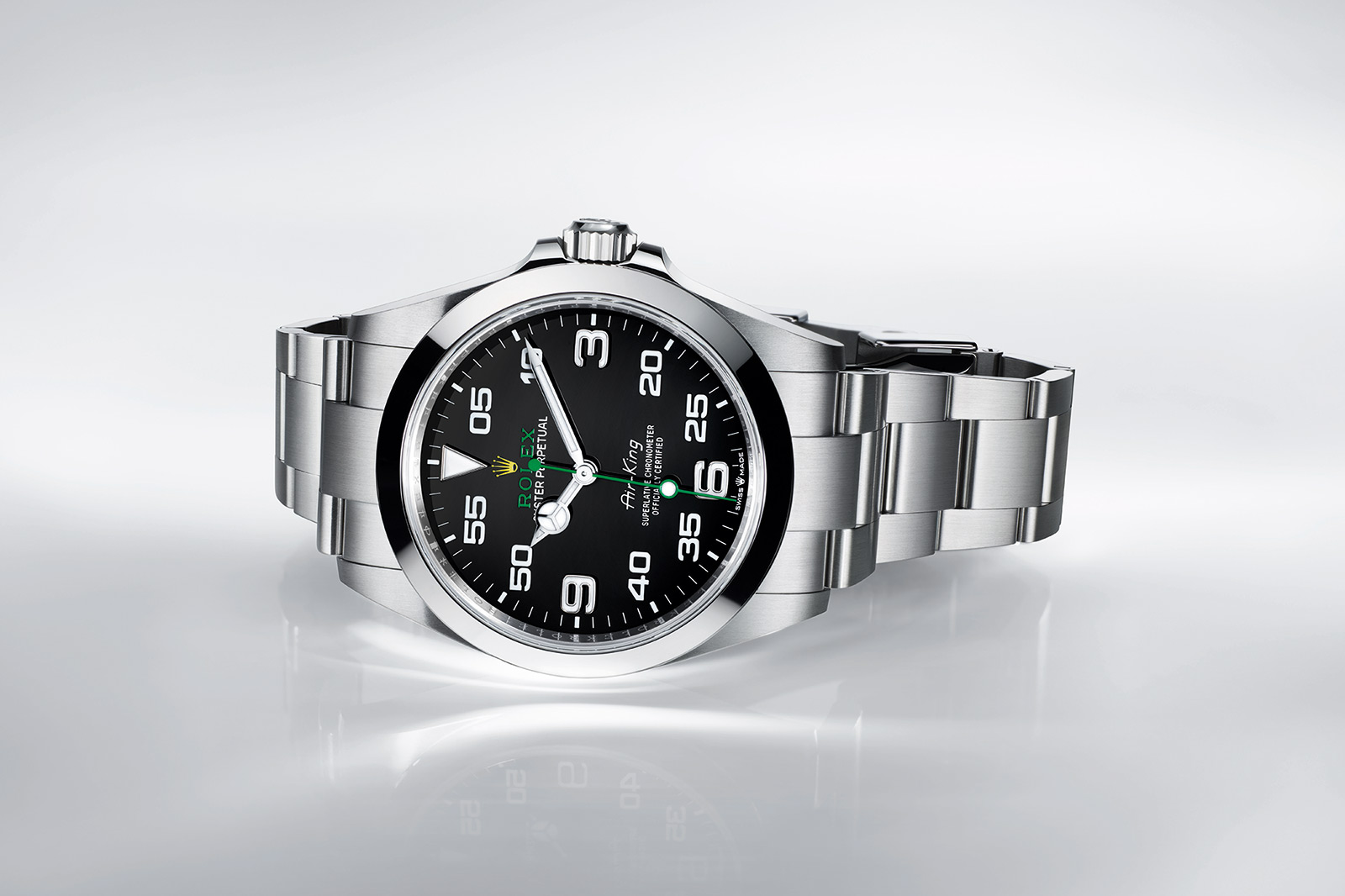 Personally, I preferred it without a crown guard (it was more in line with the 1958 original), but I’ll likely be in the minority there. It does help it fit with its stablemates a lot more naturally, so if that was Rolex’s goal, they’ve achieved it nicely.

What I do appreciate is the update to the numerals. Previously, it went from 5 to 10 to 15, etc. With every other number (bar the oversized 3, 6 and 9) two digits, that first 5 always looked out of whack. Now, Rolex has added a 0 to the 5 for a much more aesthetically balanced look. 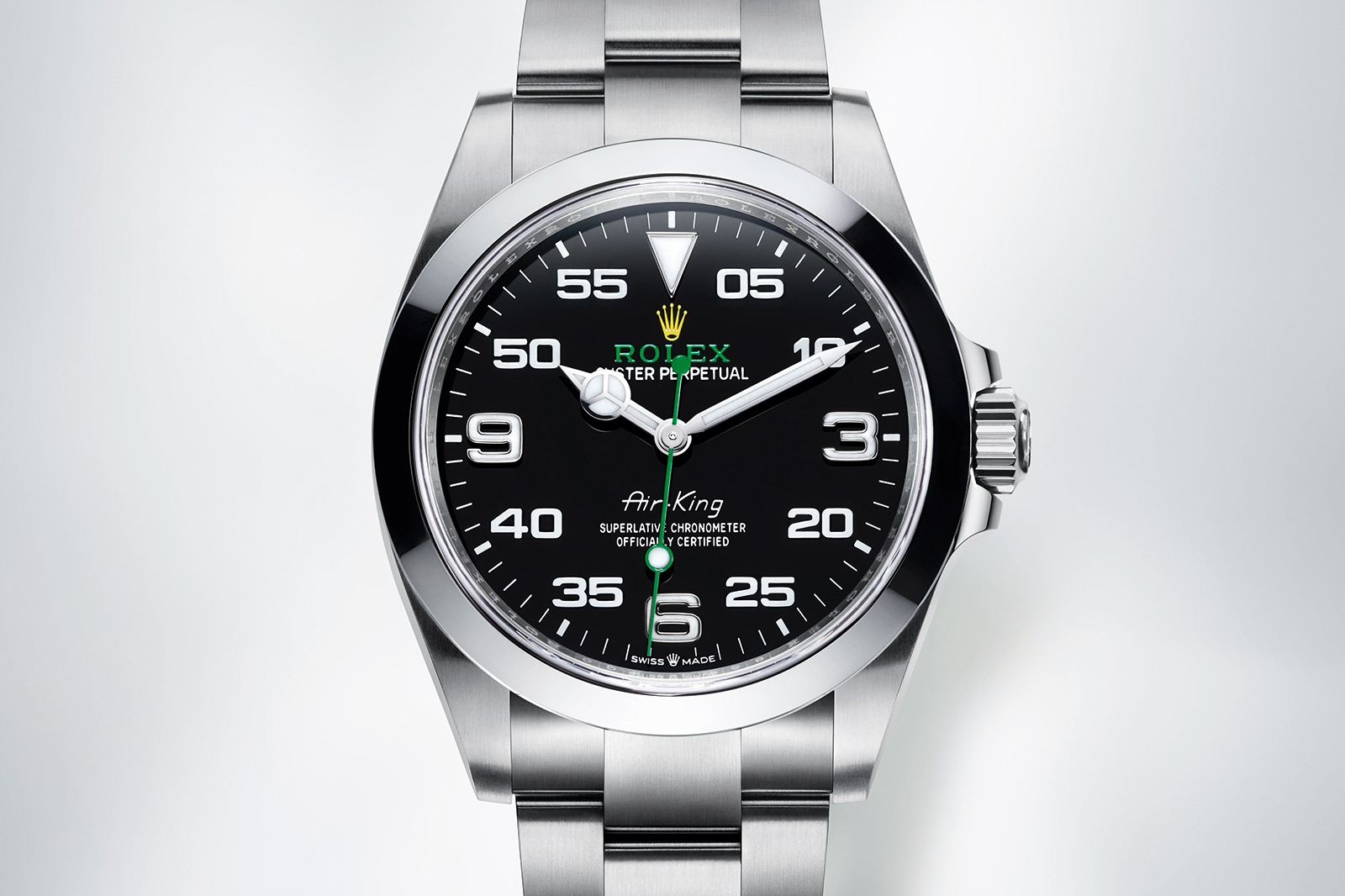 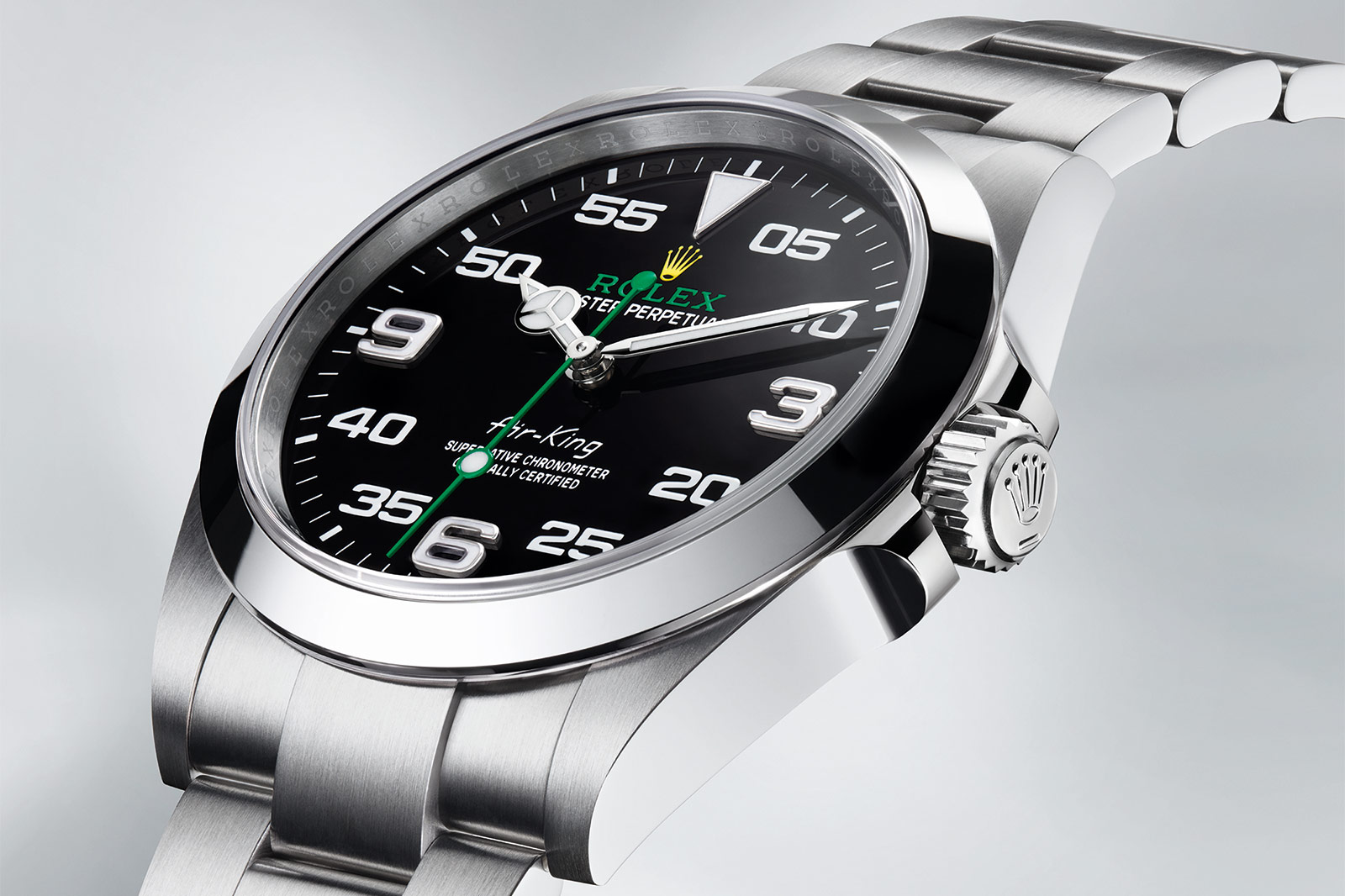 The 3, 6 and 9 on the other hand have had their own refresh. Previously they were made of 18kt white gold, now they’re luminescent. It makes a lot of sense; they’re larger to be more visible, and now they’re more so than ever. The same Chromalight is used on the hands and 12 o’clock marker, again leaning into its tool watch status.

Otherwise, the aesthetics of the Air-King are similar enough to the 2016 model, with the same lettering at 6 o’clock (lettering that’s been there since 1958) and the black dial and green second hand and Rolex logo. Despite the enhancements, it also still has a perfectly-sized 40mm case Like many of the watchmaker’s recent releases, it’s a much-needed refresh rather than a reinvention of the wheel. 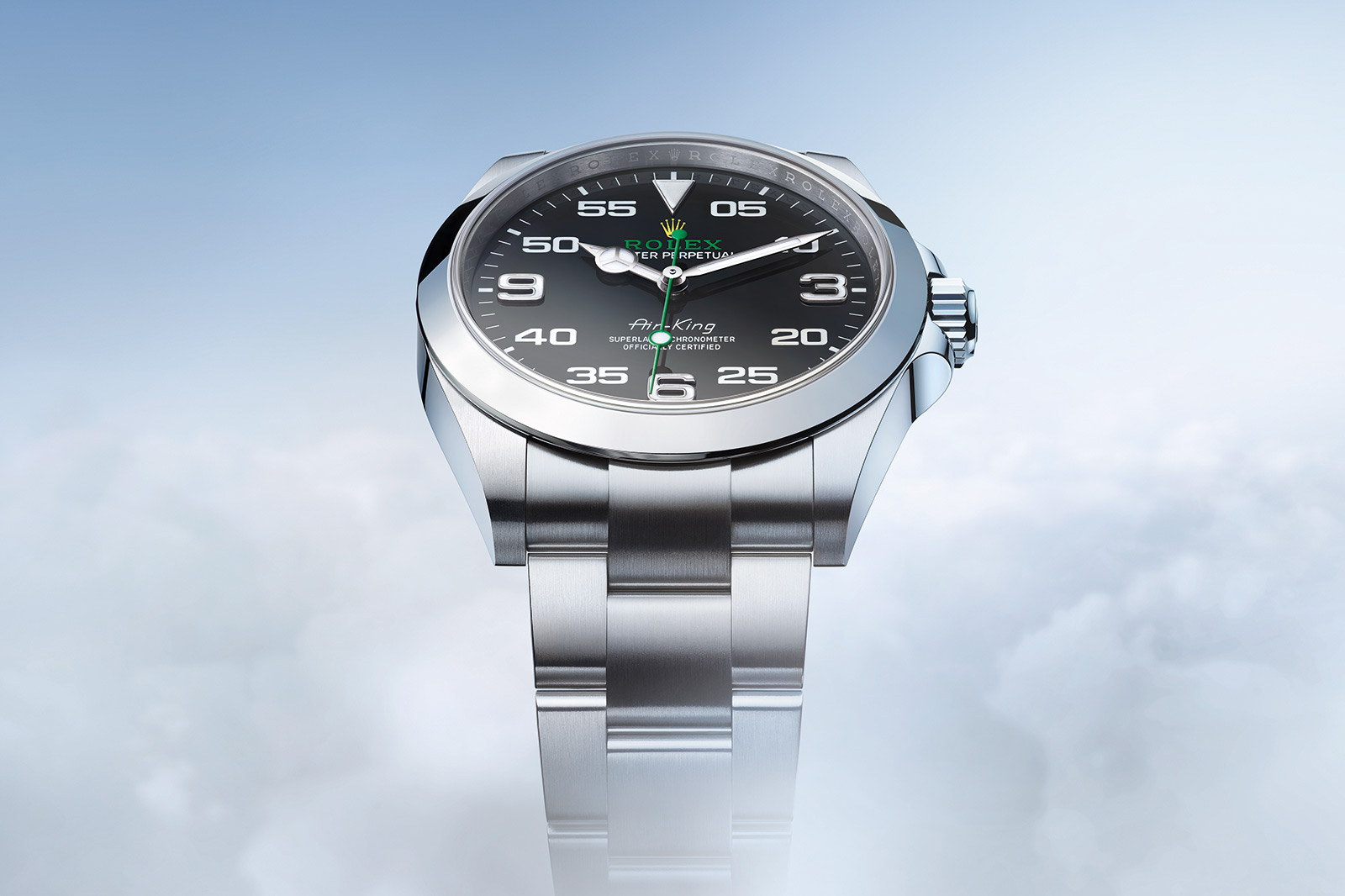 Part of that is, obviously, the movement. Rolex has been putting their 3230 calibre in everything they can and for good reason. Between the Chronergy escapement, Parachrom hairspring and host of Rolex-centric innovations, it’s an incredibly solid movement – right down to the 70-hour power reserve. 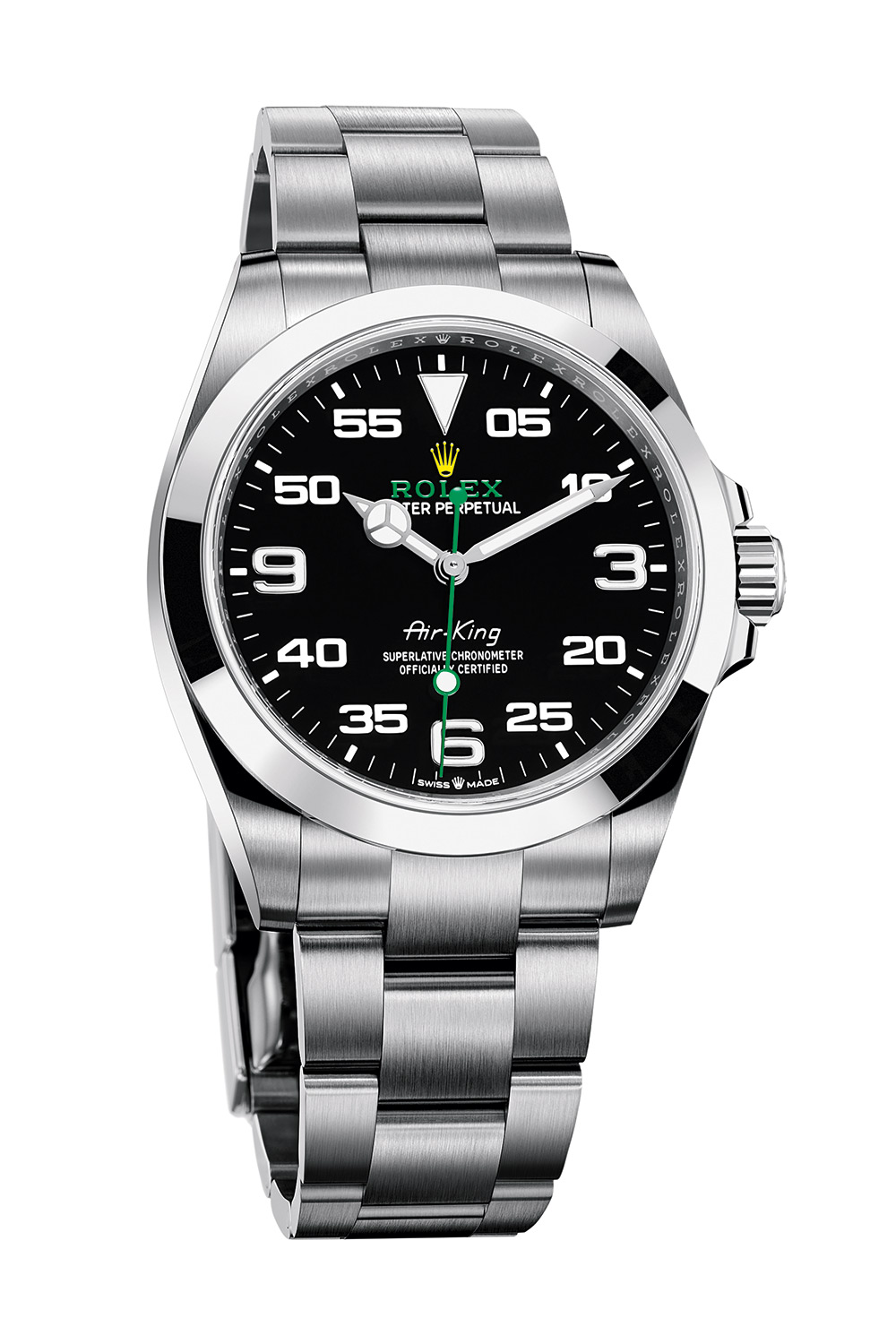 So yes, while the Air-King has always been the most underrated of steel Rolexes (which still isn’t saying much), it was overdue another look, partly to keep it in line with other Rolex tool watches, partly to give it a bit of the limelight it deserves.