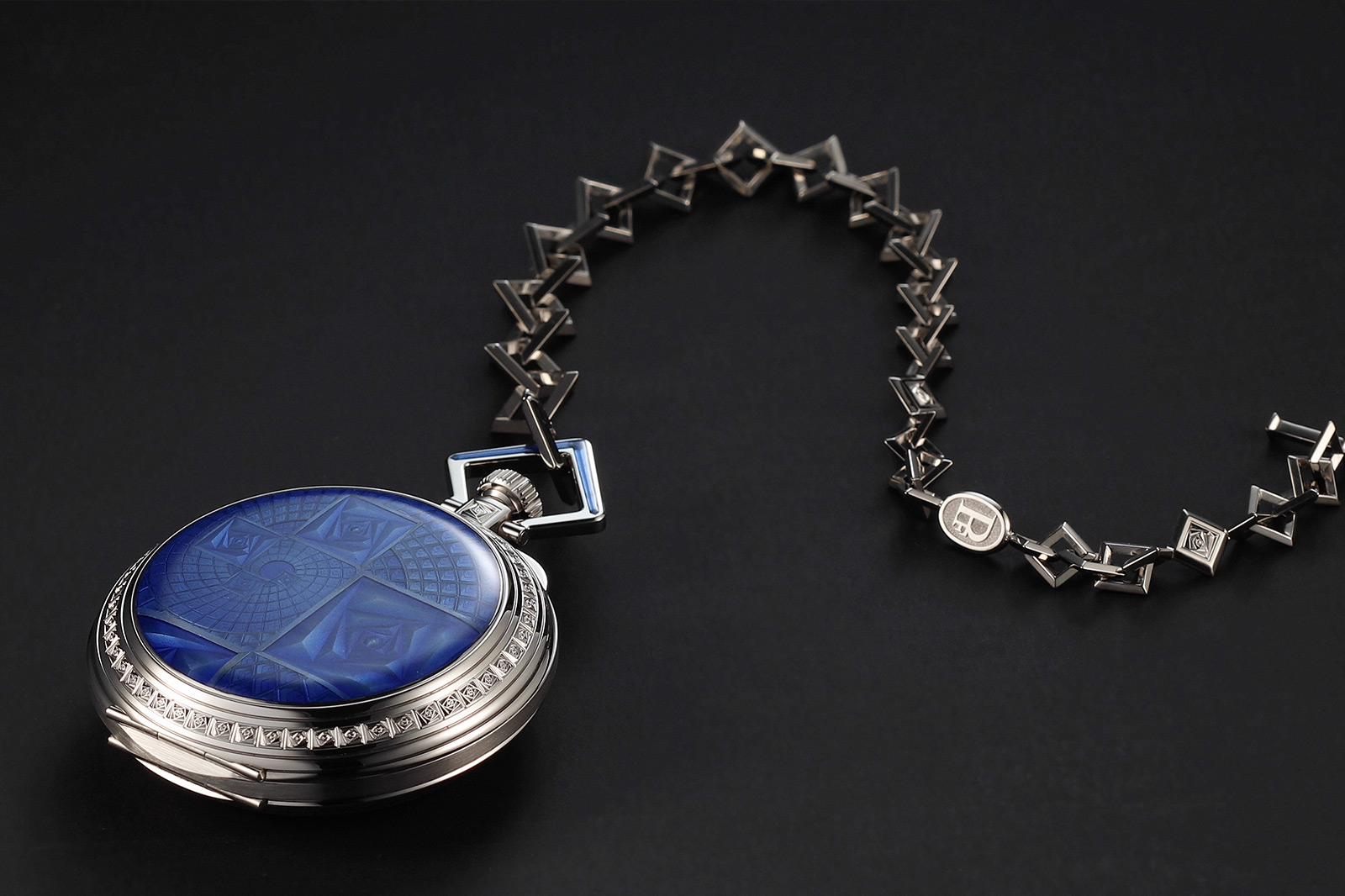 This year, Parmigiani Fleurier is celebrating their quarter-centennial, impressive for a staunchly independent watchmaker. That of course means a very special watch. That said, rather than offering up some 25-piece limited edition, Parmigiani has gone one step further with the piece unique La Rose Carrée – and it is stunning.

Parmigiani Fleurier as a brand has always had a lot to do with founder Michel Parmigiani’s restoration work, so it’s fitting that that’s where La Rose Carrée comes from, too. Back in the late 90s, he acquired a pocket watch calibre in need of some serious restoration work, a grand sonnerie and minute repeater created by legendary watchmaker Louis-Elisée Piguet, the calibre 5802. It’s an incredibly rare movement, with only around 230 ever built. Unfortunately, he never got around to giving it the attention it deserved. 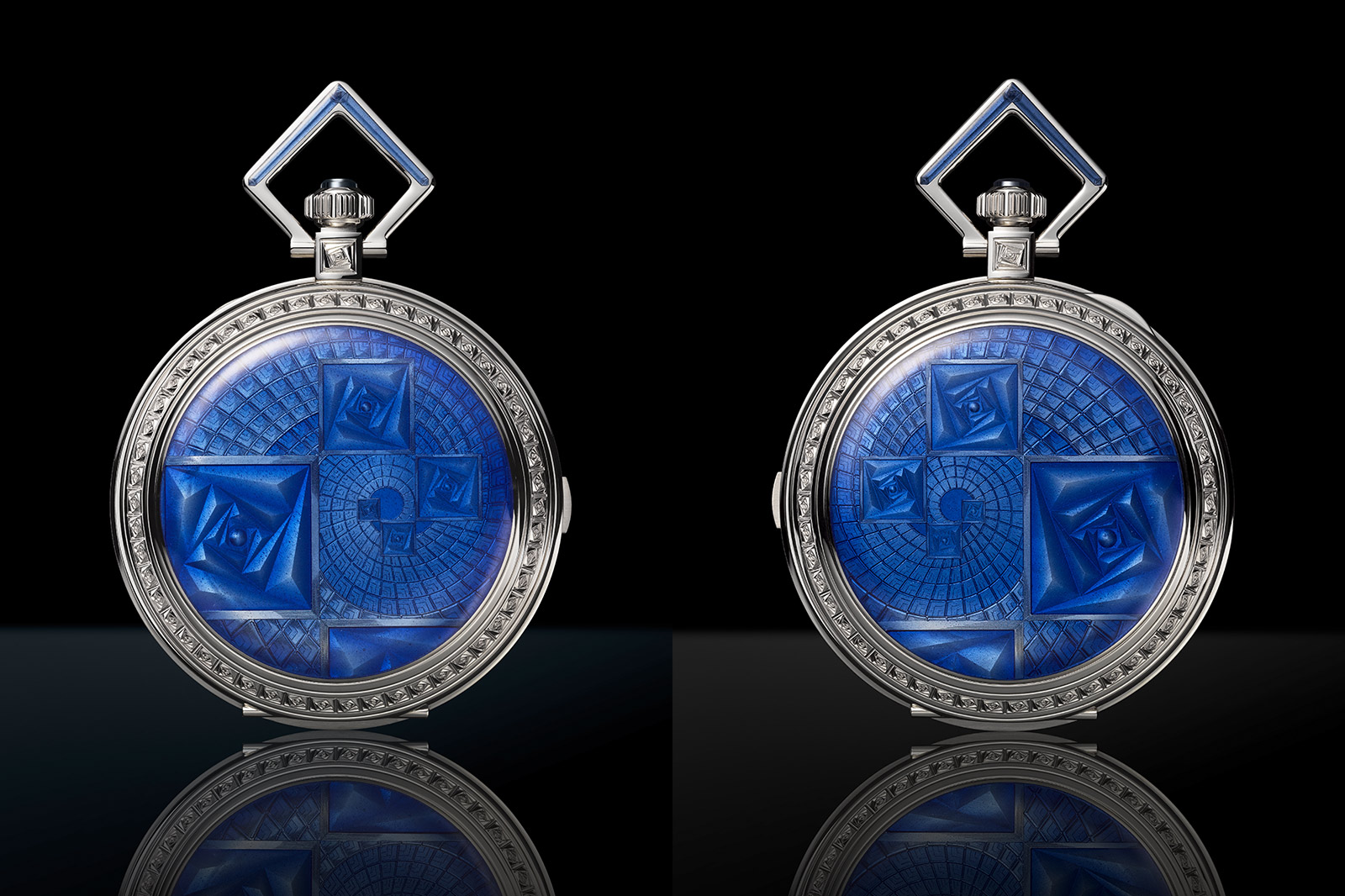 That was until current Parmigiani CEO – and herald of their seriously impressive latest collections – Guido Terreni was looking for a project to fit the brand’s 25th anniversary. So, the pair decided to finally give the watch its overdue new lease of life. And when they decided to do it, they did it quickly. La Rose Carrée was built in just 12 months. 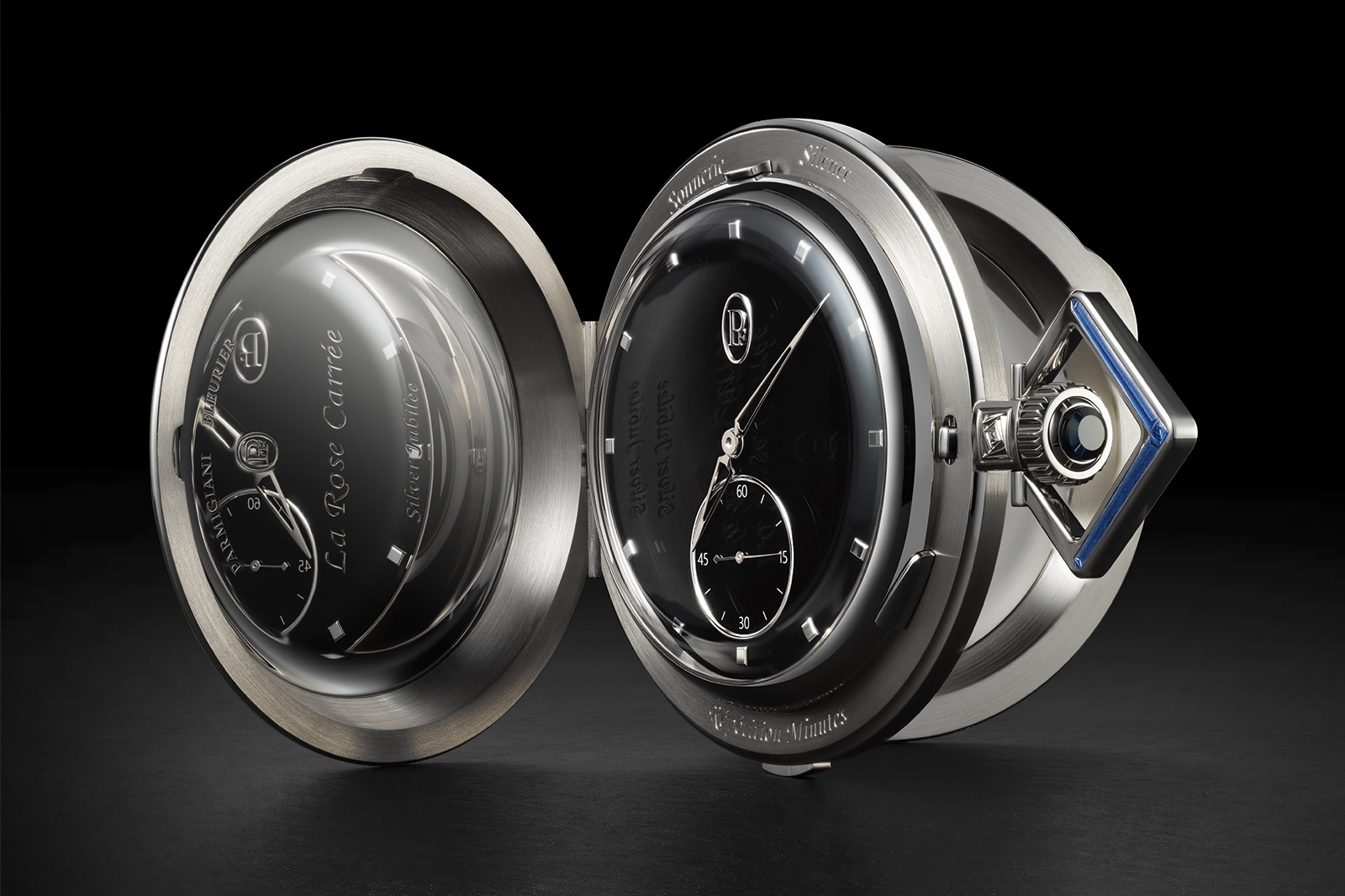 Obviously, that means a massive overhaul of the delicate movement, bringing the grand sonnerie and minute repeater back to full health. It also meant a brand new case, which turned out to be incredibly ornate. The double hunter covers are engraved with Roses Carrée, or square roses, a pattern that follows the golden ratio that Michel Parmigiani has always been a little obsessed by. The entire thing is then layered with gorgeous blue grand feu enamel, the three or four layers adding a superlative depth to the colour. 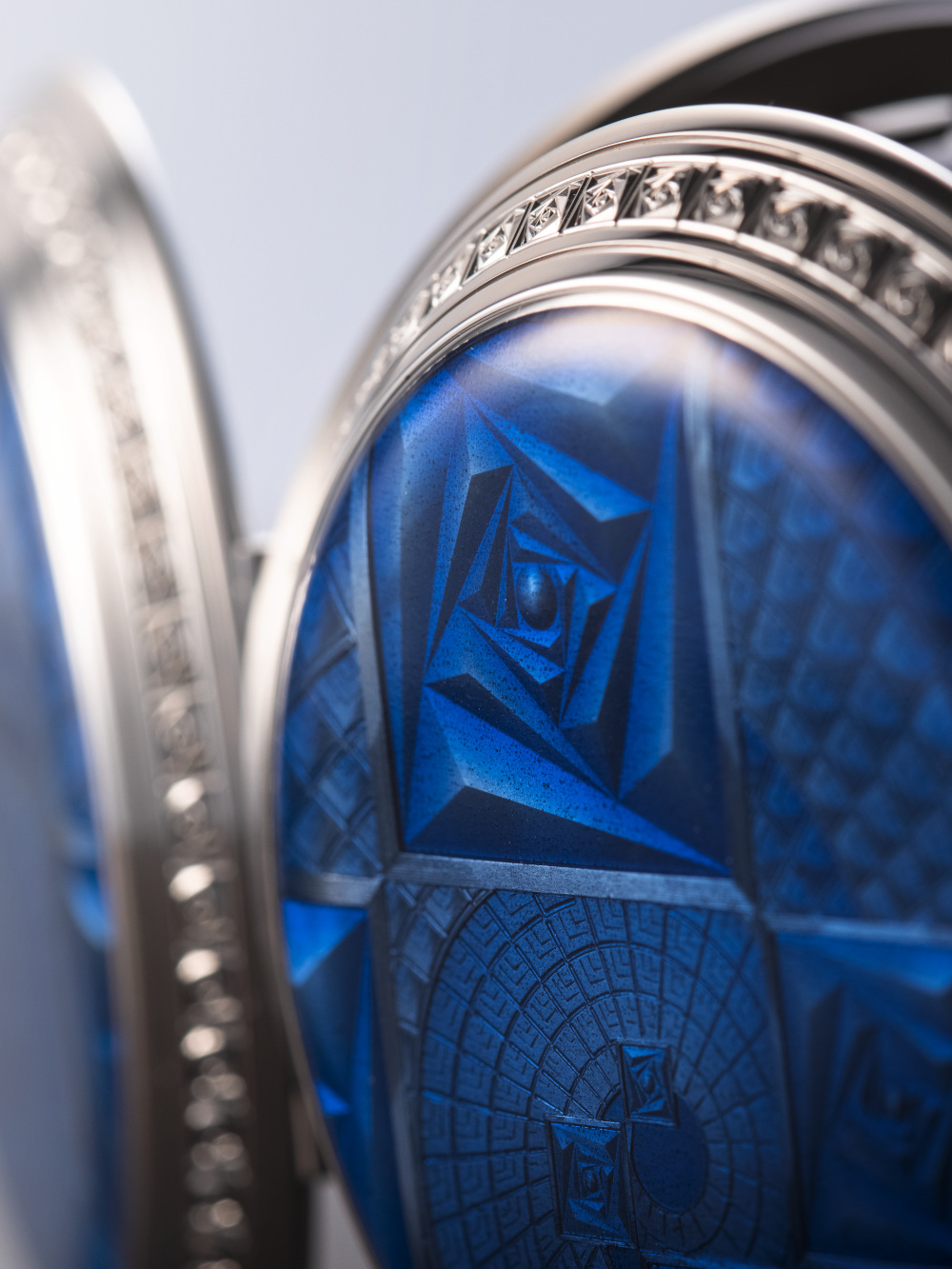 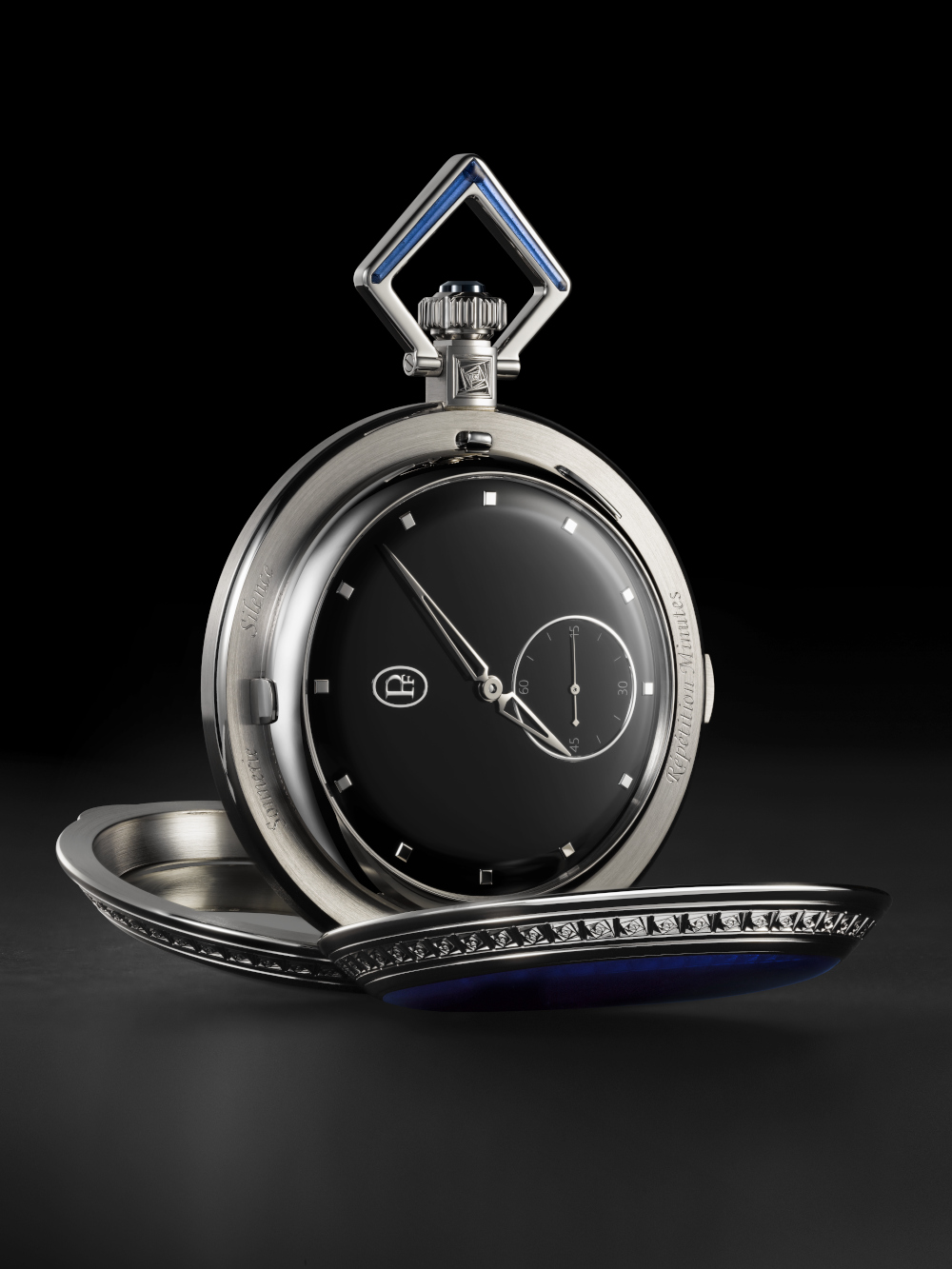 Given the size of the case – it measures in at 60mm across – it’s a serious feat of enamelling. Needless to say, It looks absolutely sumptuous with exacting details and that classic golden ration design, which is more than a little sexy to fans of western design. 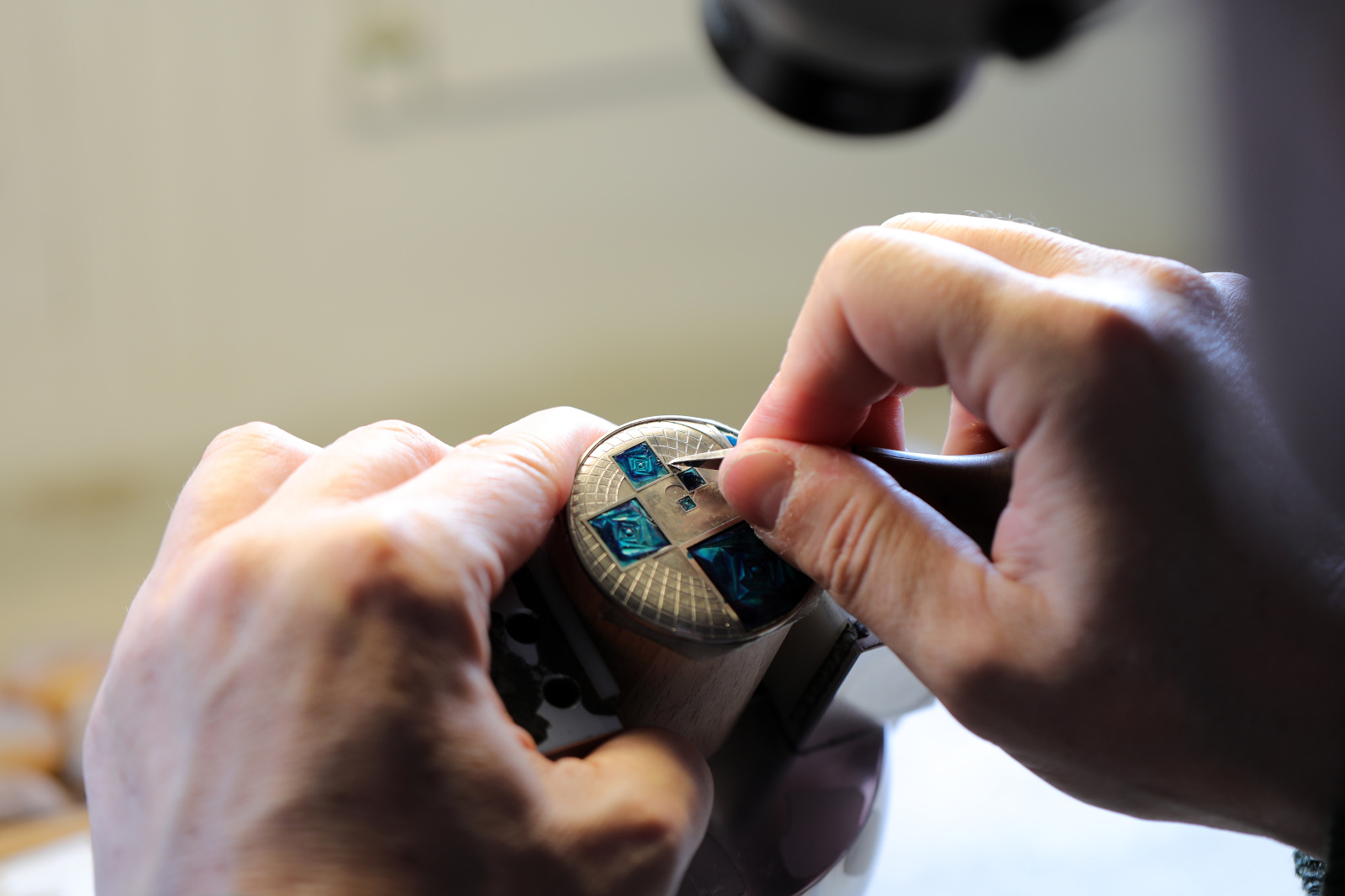 Beneath the front cover is a dark onyx dial, with contrasting flashes of white gold on the delta hands and outline of the subdial. It’s minimal, restrained and a serious piece of work made from solid mineral. Beneath the rear cover is the 5802 movement, the focal point of the watch and the reason it exists in the first place. It was painstakingly restored by Parmigiani’s dedicated restoration workshop, which Michel Parmigiani himself is also part of. 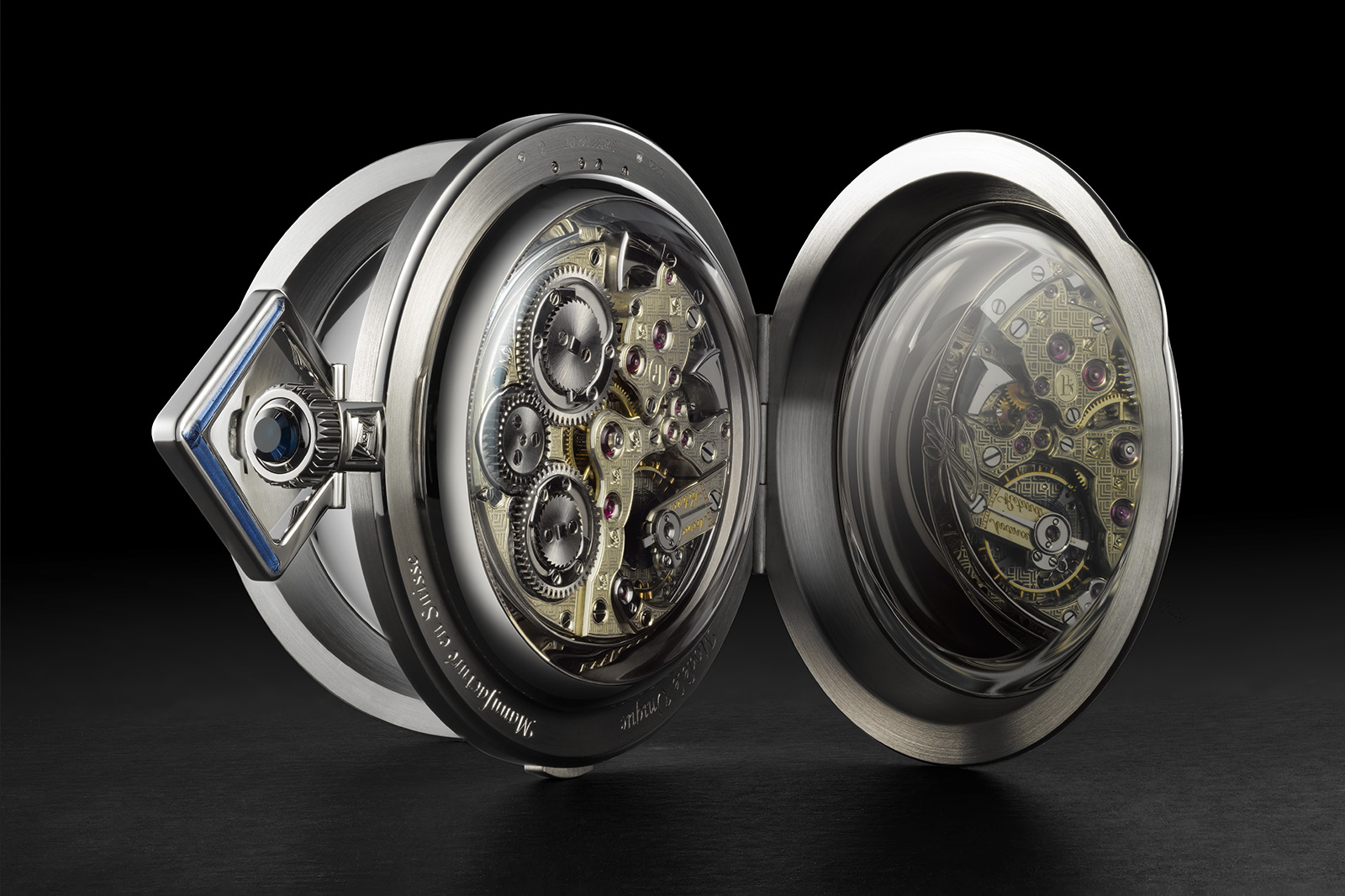 The grande sonnerie and minute repeater functions mean it can chime hours, quarter hours and minutes with a beautiful tone. Of course, it too has been fully engraved with the same Rose Carrée pattern across mainplate and bridges. It’s exhaustively ornate.

The final flourish is the crown, which is set with a sapphire to match the water blue of the case enamel, protected by a pocket watch bow (also in blue enamel) anchoring a square-link chain.

Lately Parmigiani’s timepieces have been getting a bit more modern, a little less classically finished than their previous collections were. La Rose Carrée is proof that when they want to, the Fleurier-based manufacture can bring out the big guns and create something jaw-droppingly spectacular. But that’s what happened when you utilise the full force of a watchmaker like Parmigiani with around nine expert artisans involved in the production of this single watch. Sure, this isn’t a typical piece, but then you only turn 25 once. No matter how much you try to convince people otherwise.